AttractionTickets.com's Expert Guide to Halloween and Christmas at the Theme Parks

Unlike many destinations around the world, Orlando has some of its most temperate weather during autumn and winter, making September through March the perfect months for outdoor events and festivals in the theme parks.

Epcot’s International Food & Wine Festival is a massively popular event ushering in autumn (September-November) as 25 ‘global marketplaces’ line the walkway around World Showcase, featuring a selection of ‘small-bite’ food and beverage selections based on each host country’s traditional cuisine. Celebrity Chefs give cooking demonstrations, special dining events are on offer, food and wine lectures and seminars are well worth attending, and hands-on training courses are geared toward beginners as well as serious foodies. As with Epcot’s Flower and Garden Festival, various well-known bands add an extra high-energy touch with Eat to the Beat concerts, held three times daily at the America Gardens Theatre. The festival and concerts are free with park admission, but food and beverage samples, dining events, and some lectures and seminars cost extra. 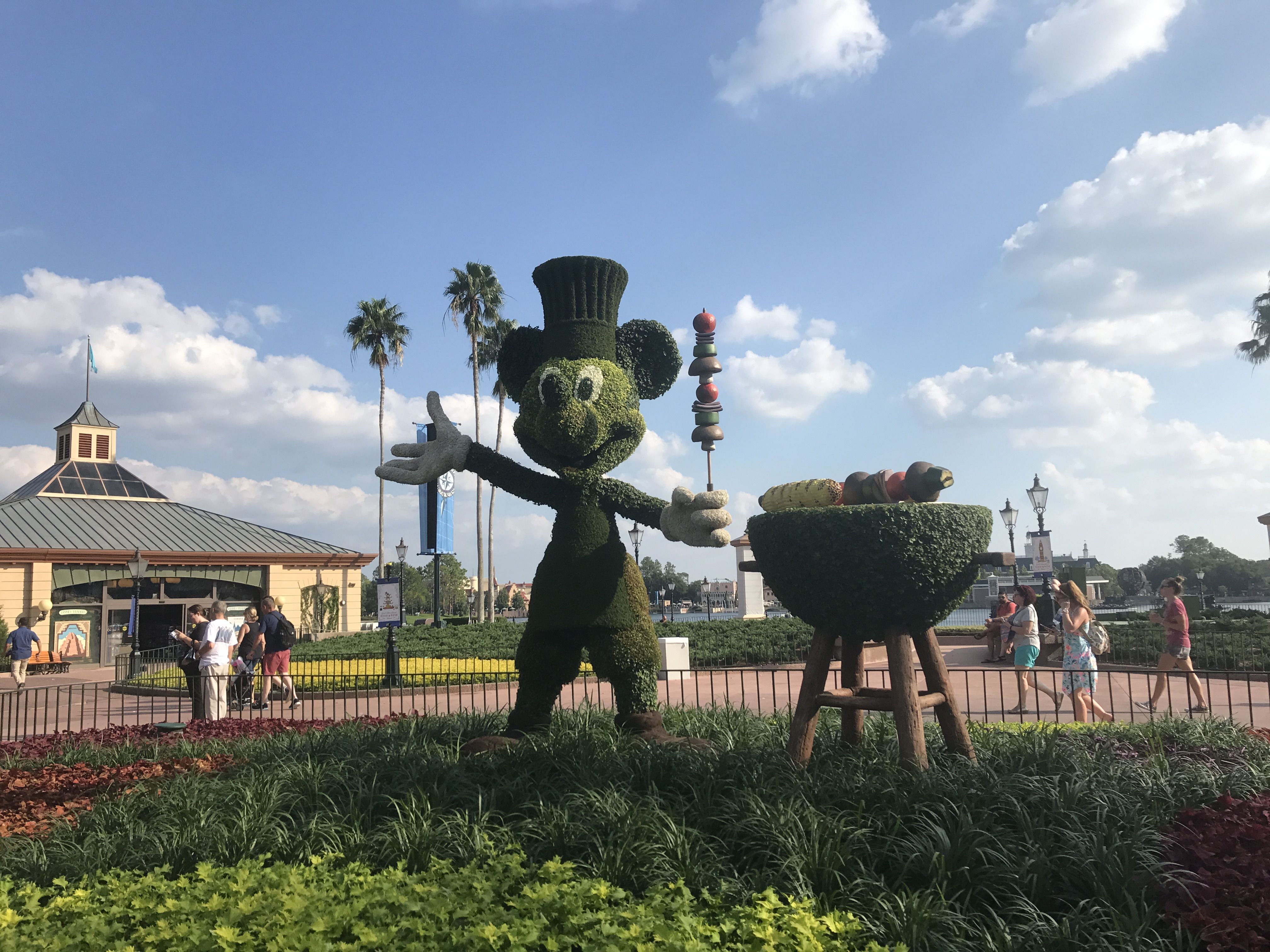 Mickey's Not So Scary Halloween Party is an after-hours, specially ticketed event at Magic Kingdom, and even the locals flock to it for the fun of seeing the Disney characters in their Halloween costumes. Unlike traditional Halloween scare-fests in Orlando, this is totally family-friendly fare, with Mickey, Minnie, Goofy and Co putting on their party best for a trick-or-treat festival featuring a specially-themed parade, shows, and story-tellers. Highlights include Mickey’s Boo-To-You Parade, Happy Hallowishes Fireworks, Halloween Riverboat rides and the eerie makeover of Main Street USA which lends a superb ‘spooktacular’ appearance. Most of the park’s rides are open until late, and party-goers definitely benefit from the limited number of guests in attendance (save the busiest attractions for party-time and you’ll avoid the long waits). The fireworks and parade are the most popular events, and people start staking out their spots an hour or so in advance for the best views. 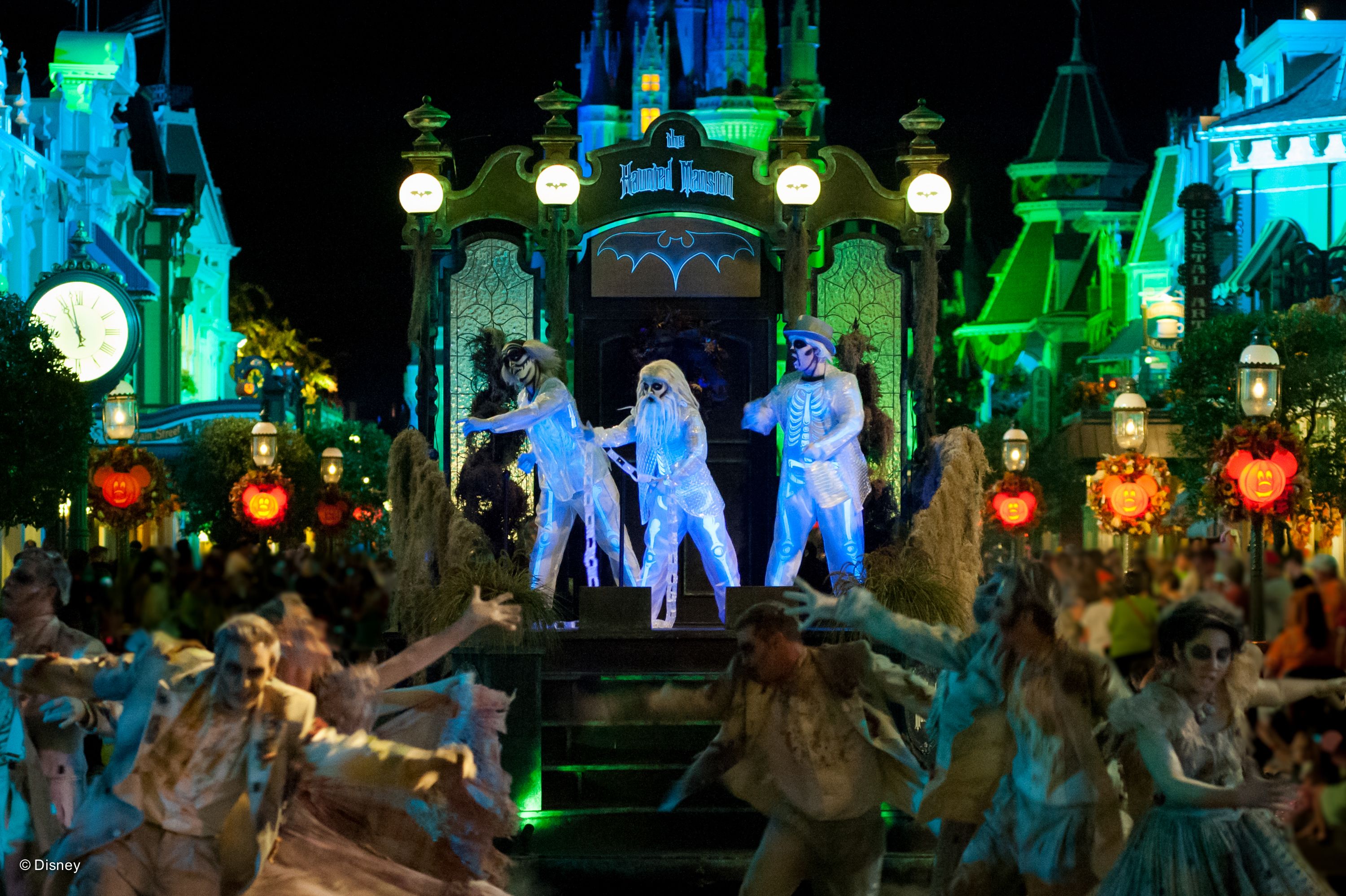 Mickey's Very Merry Christmas Party is an essential Magic Kingdom seasonal favourite featuring festive stage shows, carol singers, Mickey’s Once Upon A Christmas time parade accompanied by Santa Claus himself, the shimmering beauty of Castle Dream Lights on Cinderella Castle, and a brilliant specially-themed fireworks display. Magic Kingdom during the Christmas season is joyful enough, but when you walk through a gentle ‘snowfall’ on Main Street, it truly becomes magical. 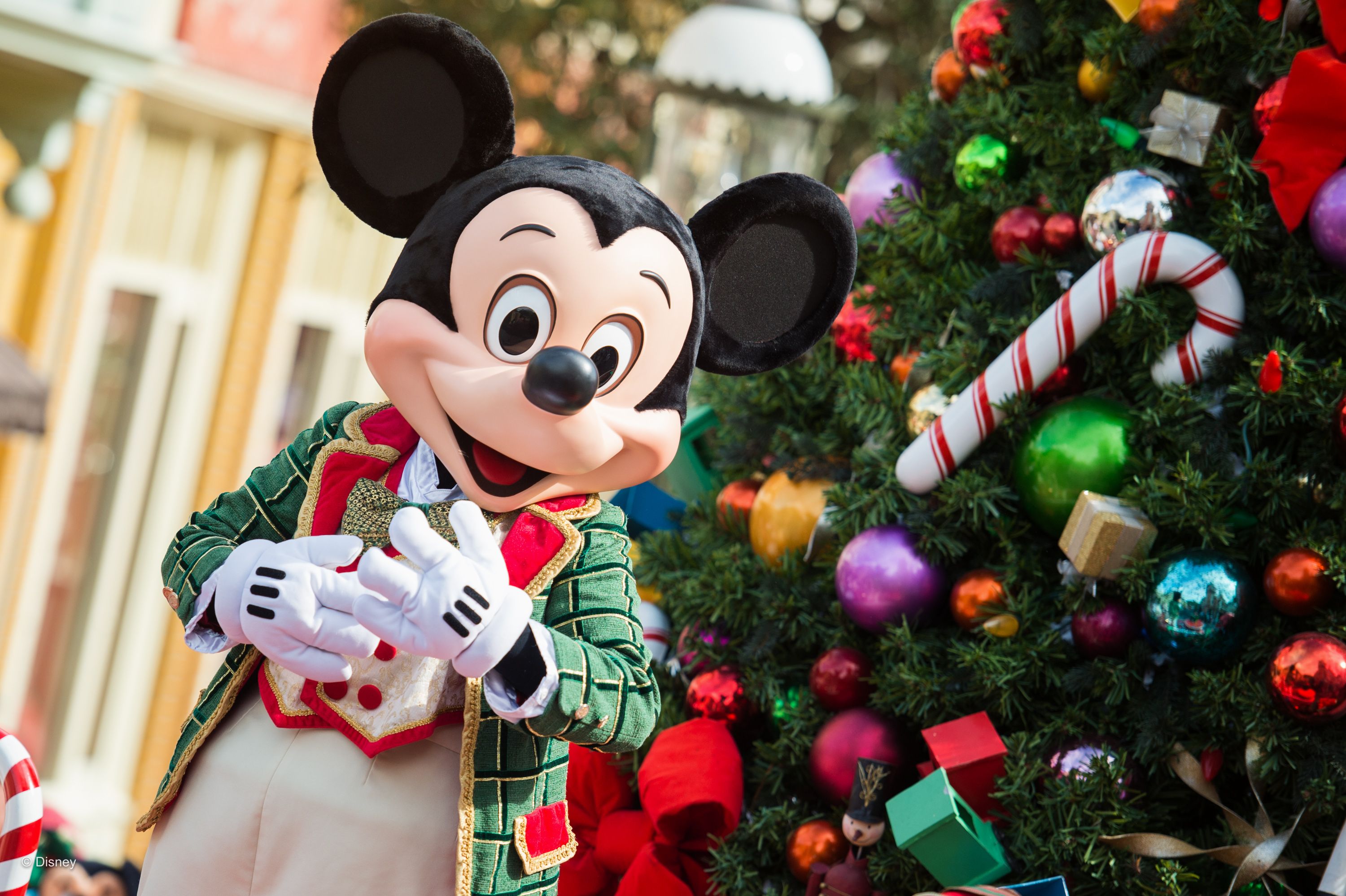 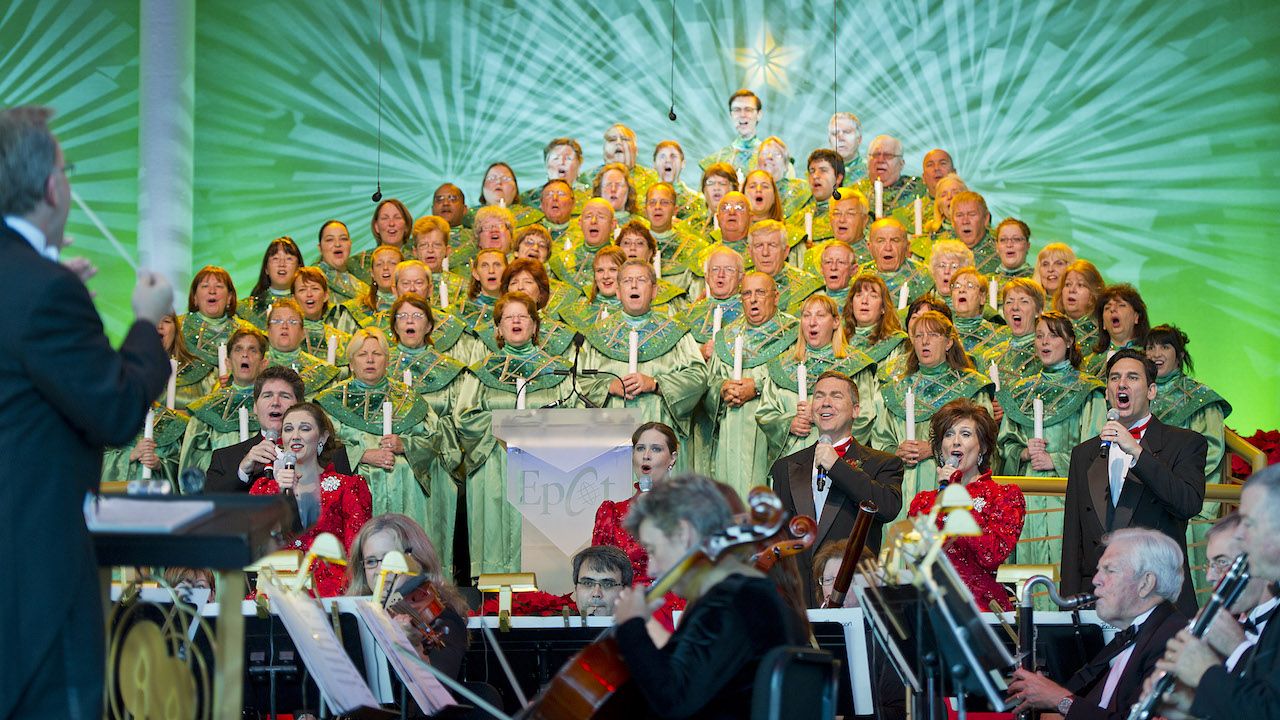 New Year's Eve is another one-evening wonder at Walt Disney World, with parties throughout Magic Kingdom, Epcot, and Hollywood Studios as the sun goes down. Hats and party horns are distributed; there are special fireworks at Magic Kingdom and Epcot, plus three showings of the Fantasmic! at Hollywood Studios (which also has a special Disney Junior Dance Party and a DJ keeps the party going on the Sorcerer Hat Stage, and it all builds to the “Lights! Camera! Happy New Year!” fireworks display at 11.50pm). 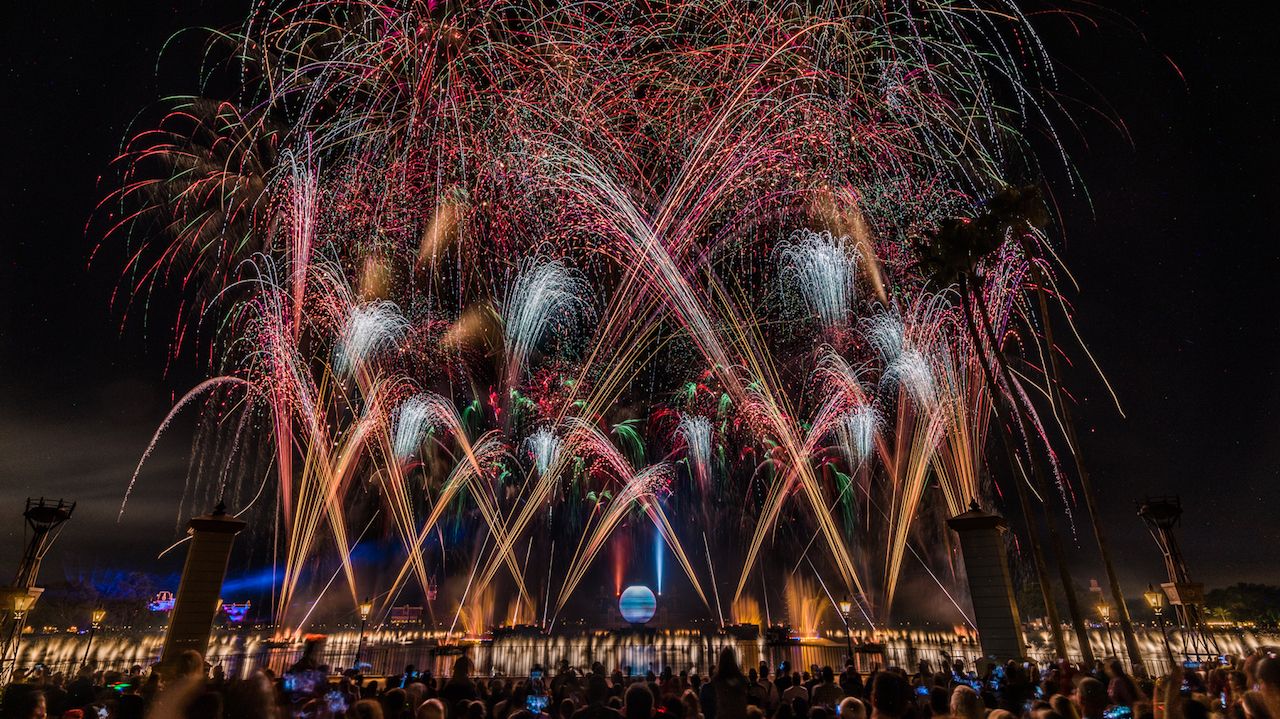 Halloween Horror Nights at Universal Studios is a stunning autumn fright-fest of haunted houses, chilling scare zones, live shows and the chance to do most of the park’s rides at night. It is a separately-ticketed event after normal park closing and piles on the frights at every turn, with roaming zombies, chainsaw gangs and other horror characters from well-known film and TV series (plus Universal’s own wicked creations). The main set-piece haunted houses feature elaborately detailed mazes where visitors run the gauntlet of all manner of horror experiences (think vampires, aliens, werewolves and other grisly ghouls) while the open-air scare zones are also peopled by ghostly scare-actors who lurk in dark corners. And the signature Bill & Ted’s Excellent Halloween Adventure show is simply a must-see, with a wonderful parody of the year’s celebrity events. 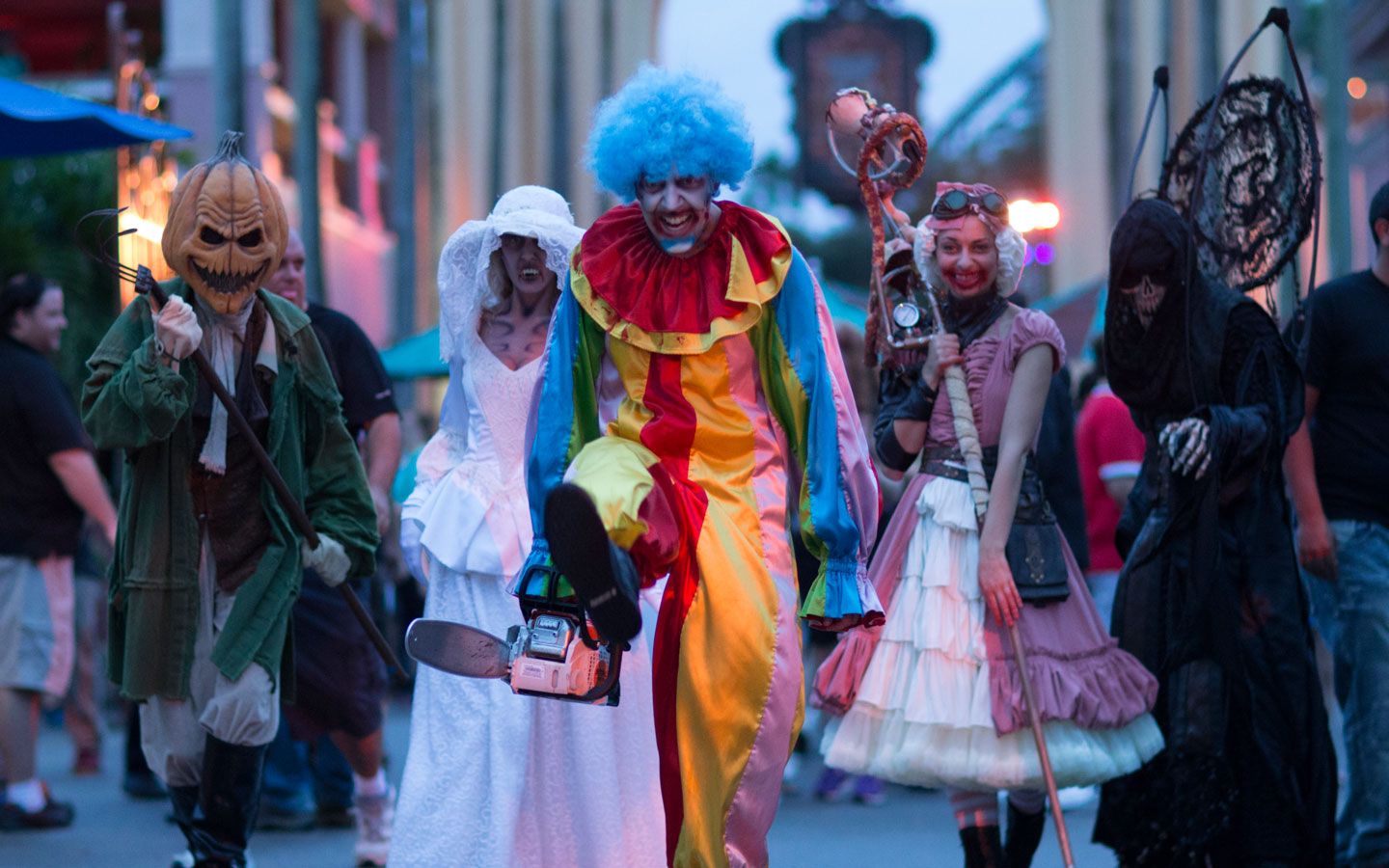 Macy's Holiday Parade is the focal point off the Christmas ‘season of joy’ at Universal Studios, featuring an array of festive floats, giant character balloons, marching bands, dancers and Santa Claus himself. There is a giant Christmas tree and ‘tastes of the season’ at a variety of winter-village-style kiosks. Look out also for special Christmas shows at A Day In The Park With Barney and The Blues Brothers. Rock band Mannheim Steamroller play festive concerts on select Saturday and Sunday evenings. 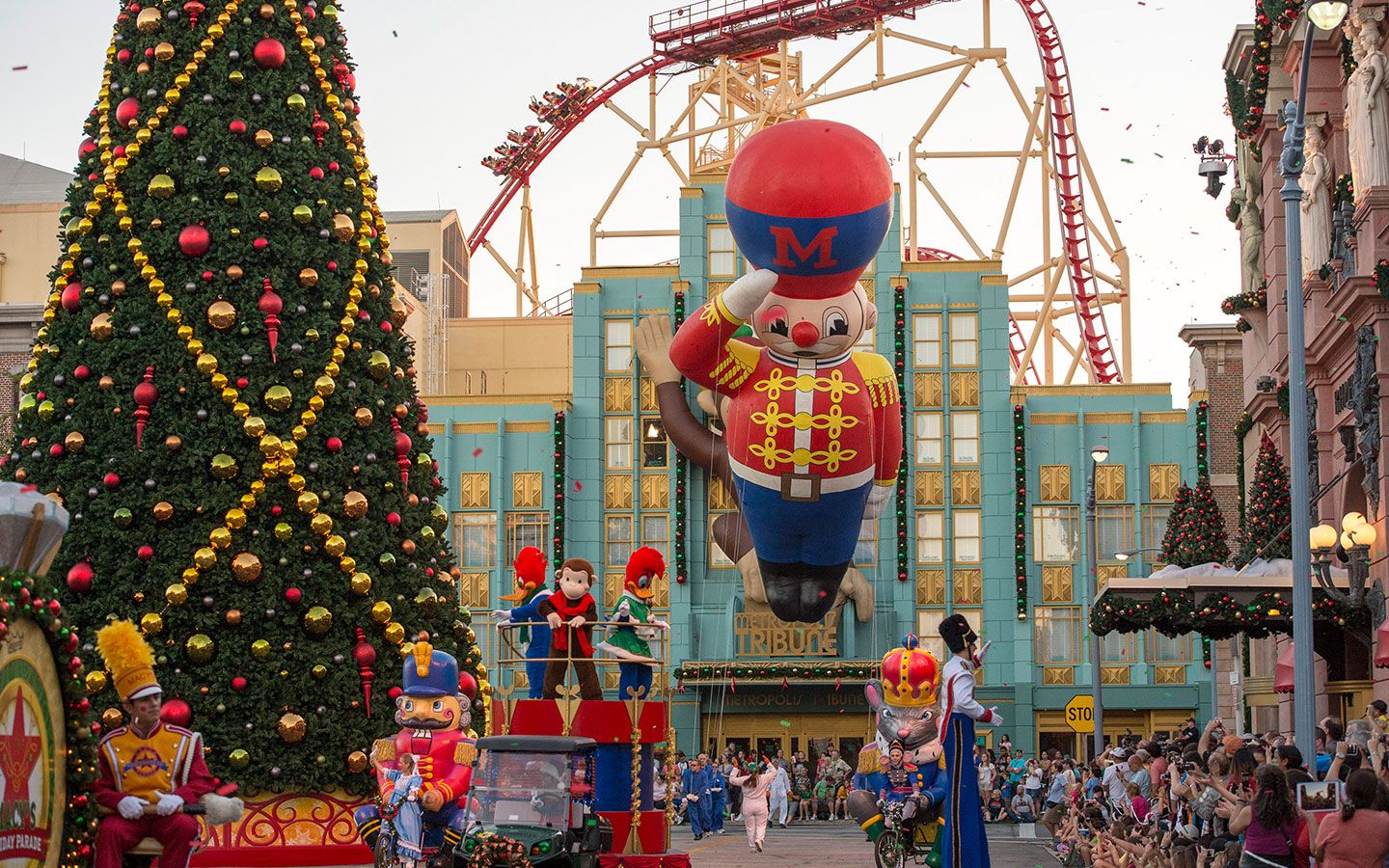 Grinchmas comes to  Islands of Adventure during the Christmas season, and Seuss Landing becomes a wintry wonderland and a major focal point. Stroll into Who-ville for a special telling of The GrinchmasWholiday Spectacular, featuring music recorded by Mannheim Steamroller, while the Seussian streets abound with Who characters and you can also meet The Grinch himself in his own holiday ‘grotto.’ 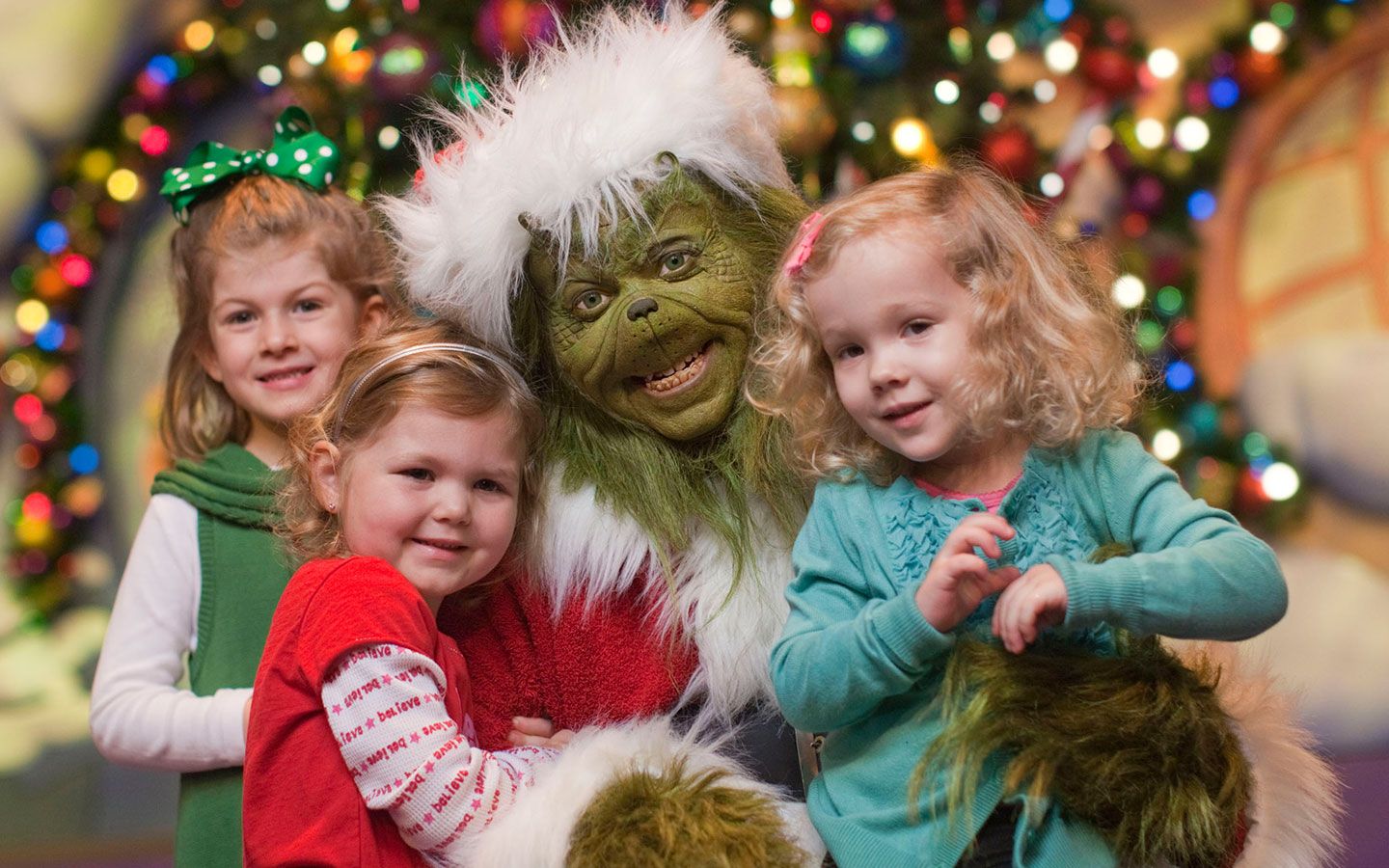 SeaWorld's Halloween Spooktacular is the park’s kiddie version of Trick or Treat fun, with activities, shows, music, character meet-and-greets and party-style events throughout the park. Look out for Penelope’s Party Zone, the official Trick or Treat stations and fun-loving sea witches Gummy Worm Wanda, Salt Water Taffy and Swedish Fish Suzy (along with over 35 other fanciful sea creatures) who greet, mingle and play with guests at specific points around the event. 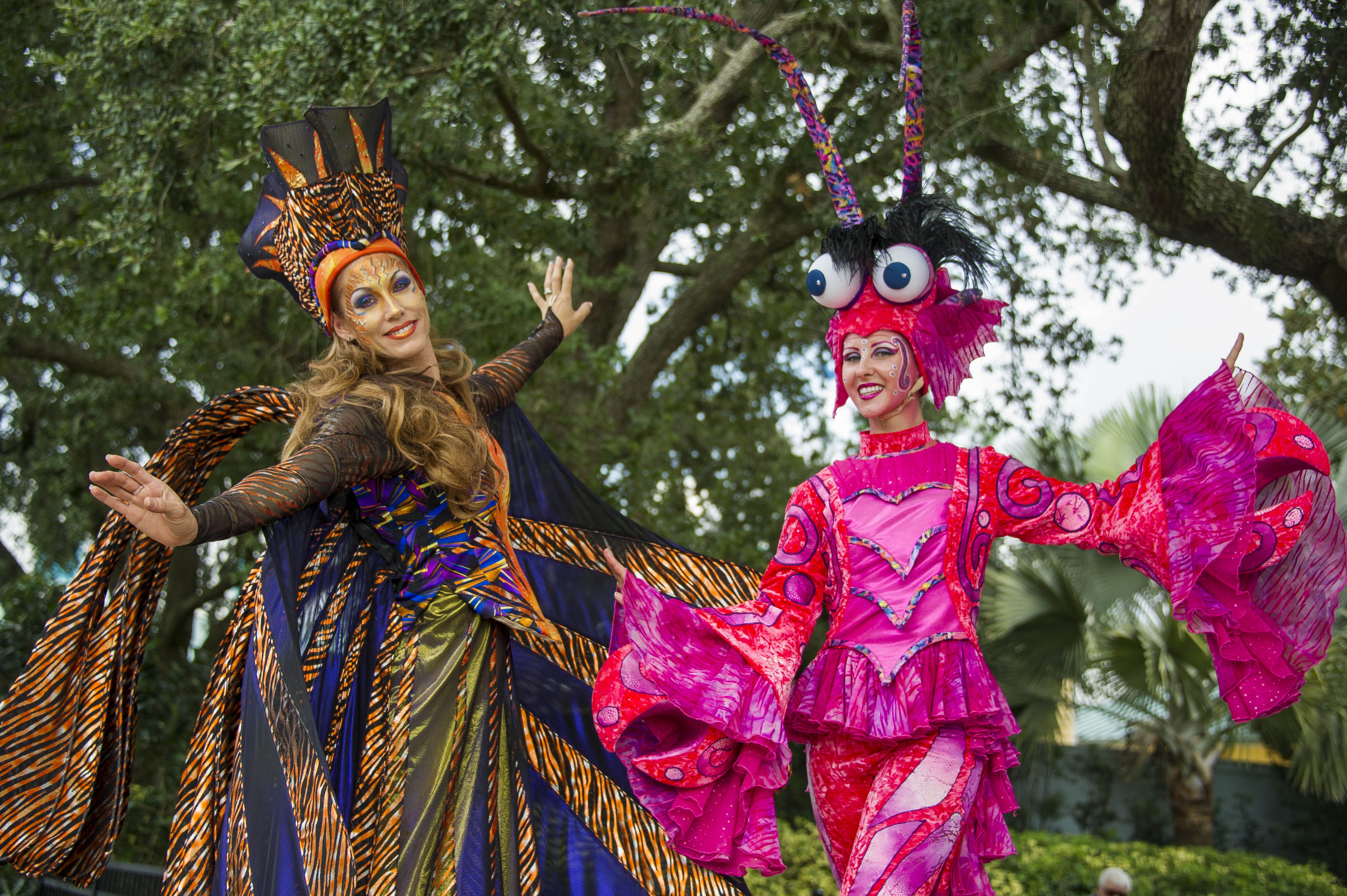 Christmas has become an absolute must-see event at SeaWorld as they dress the whole park in a fabulous array of lights, trees and special effects, as well as adding some terrific seasonal shows. The Wild Arctic ride is transformed into The Polar Express and Elmo’s Christmas Wish is guaranteed to amuse little ‘uns. O Wondrous Night is a must-see re-telling of the Nativity story, while Winter Wonderland On Ice is a great seasonal ice-skating spectacle and the Sea Of Trees is an eye-catching light-and-sound performance on the main lake. The Christmas Market provides an array of different kiosks providing tastes of the season around a roaring fire, with carolers and other musical entertainment. Shamu’s Christmas Miracles is a special night-time show with the park’s killer whales and the whole evening culminates in the pyrotechnic extravaganza of Holiday Reflections, a fireworks and fountain finale. 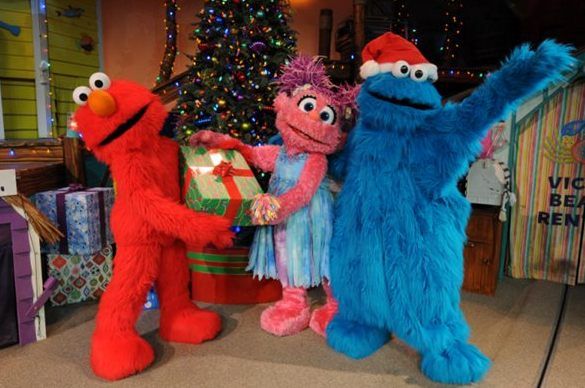 Howl-O-Scream is Busch Gardens’ version of the grisly Halloween spectacular, with a separately ticketed event after regular park closing. Haunted Houses, like Death Water Bayou and Blood Asylum, and scare zones fill the park in best horror film fashion, and there are live shows and zombie-filled streets to keep you on your toes! A special dinner buffet is a one-off extra each night and there is a DJ-hosted nightclub as well. The big rides are all open too, providing the chance to add extra thrills to riding the likes of SheiKra and Falcon’s Fury in the dark. 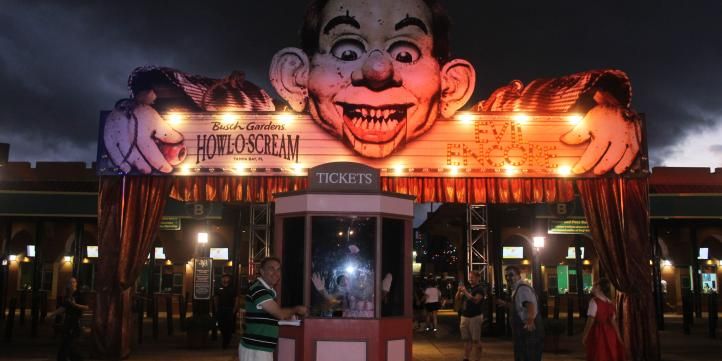 Christmas Town is Busch Gardens’ extensive celebration of the holiday season, turning the whole park into a winter wonderland at night. It features live shows, ice-skating, a special Christmas ‘village’ of crafts, food and drinks, and a million special lighting effects that give the park a truly magical festive feel. Like sister park SeaWorld, this is definitely one you will want to see at this time of year. 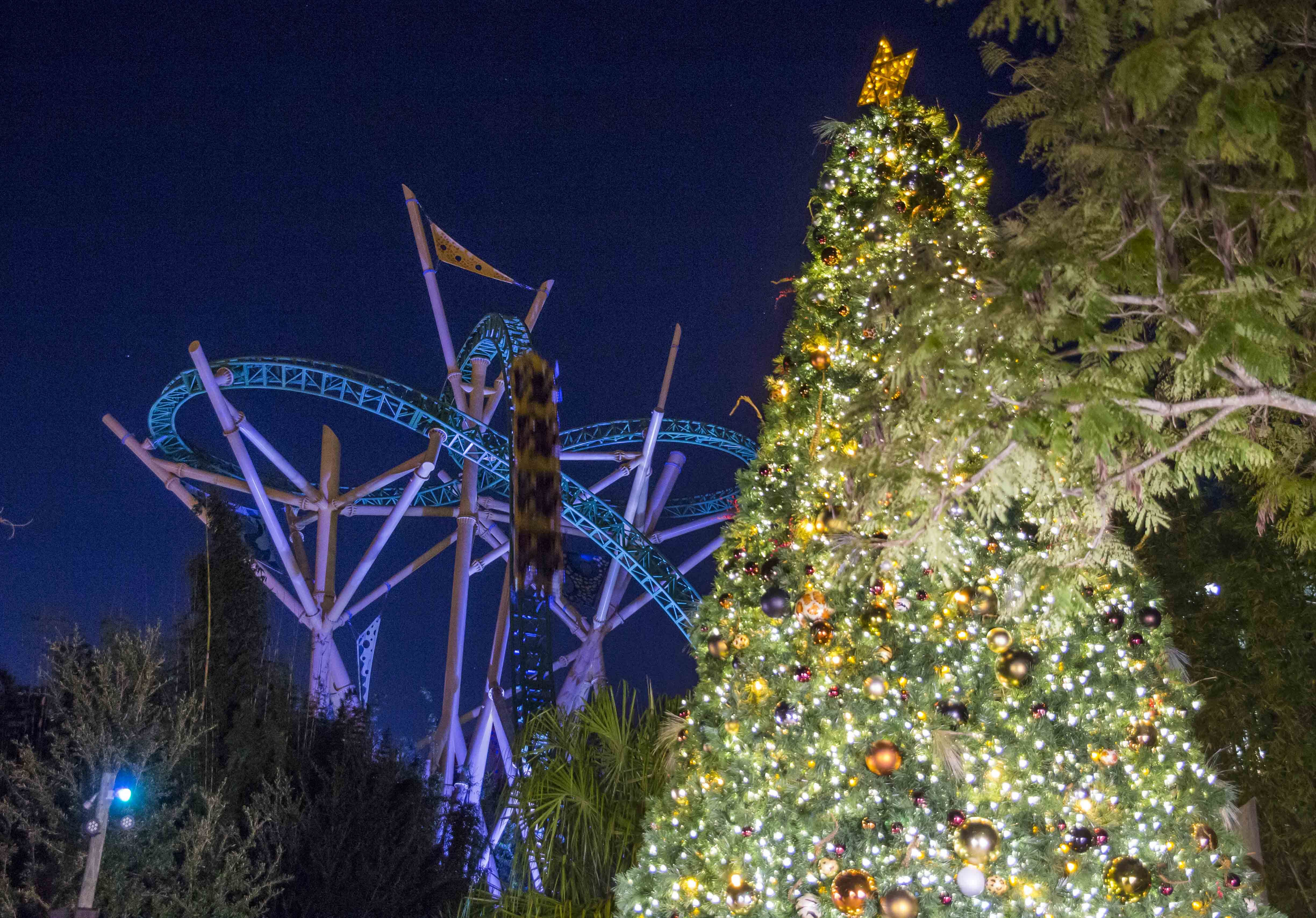 Brick or Treat is the annual celebration of Halloween, given a real family-friendly twist here with trick-or-treating along the brick-or-treat trail, super-brick build activities, the largest LEGO Jack-O-Lantern in the world, a meet-and-greet with LEGO characters, Halloween entertainment and an all-kids costume contest with brick-tastic prizes! 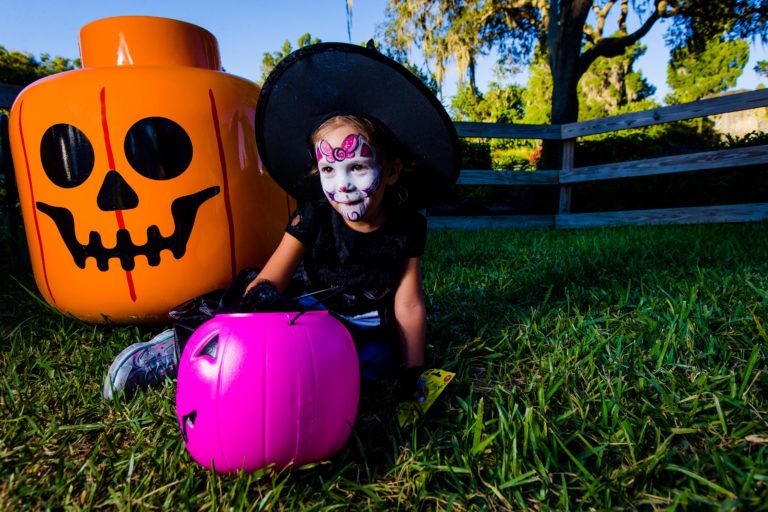 Christmas Bricktacular arrives in December and provides a festive setting and lots of holiday fun throughout the park, culminating in an evening tree-lighting ceremony. Other events include a Christmas scavenger hunt, LEGO Santa and Toy Soldier characters, and a host of decorations, with a ‘winter wonderland’ snowfall at regular intervals. 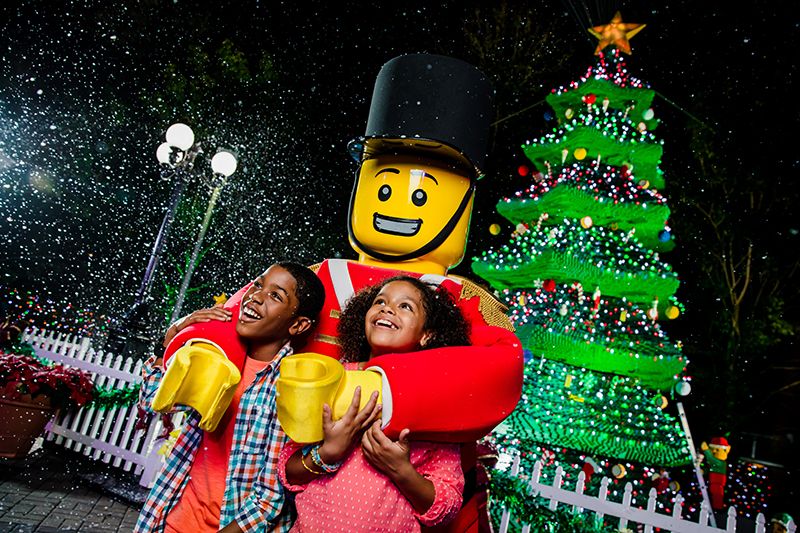 Countdown to Kids' New Year's Eve is an imaginative programme that adds evening fireworks – with the special viewing glasses – over Lake Eloise each night from December 26 as the park counts down daily to the New Year, with even more kid-friendly events and a grand finale firework show on New Year’s Eve itself.