Back in May 2018, Universal Studios Hollywood announced that they would be closing their famous Jurassic Park ride to make way for an exciting new attraction inspired by the Jurassic World movies! With the amazing new ride set to open this summer, Universal have shared some new details which have made us even more excited for what’s in store. If you want to be one of the first to try out this fantastic new ride, make sure you book your Universal Studios Hollywood tickets in advance.

Universal recently confirmed that ‘Jurassic World- The Ride’ will “fuse 21st-century technology and astounding special effects with new dinosaurs from the Jurassic World film”. Get ready to be fully immersed into the incredible story as you embark on a thrilling water adventure.

This state-of-the-art attraction will feature an original storyline that takes place inside the Jurassic World theme park. This ride will be a must-do if you’re a big fan, as you’ll get the chance to experience Jurassic World in a brand new way. There will be new dinosaurs from the film, a lush scenic design, and ground-breaking technology that is yet to be experienced within a theme park! Sounds good, right?

The journey starts when you board a specially designed raft. You'll have to navigate the lush surroundings, passing towering dinosaurs that Universal have revealed will be “just an arm’s length away” from guests! You’ll come across docile creatures like the Stegosaurus and Parasaurolophus, before encountering predatory Velociraptors and Dilophosaurus. These creatures are looking for one thing only and you’re their prey!

Things take a turn for the worse when you’re caught up in the middle of a battle between a deadly Tyrannosaurus Rex and one of the attraction’s brand new dinosaurs. Make sure you hold on tight because the only way to escape is down an 84-foot waterfall! Hold on tight and prepare to take the plunge!

This incredible Jurassic World ride is being reimagined by an award-winning team, meaning you can expect something pretty spectacular. Construction and design are under the direction of Universal Creative, award-winning special-effects visionaries at Industrial Light & Magic (ILM), a division of Lucasfilm, Ltd., the brand stewards at Universal Pictures and acclaimed filmmakers Steven Spielberg, Colin Trevorrow and Frank Marshall. 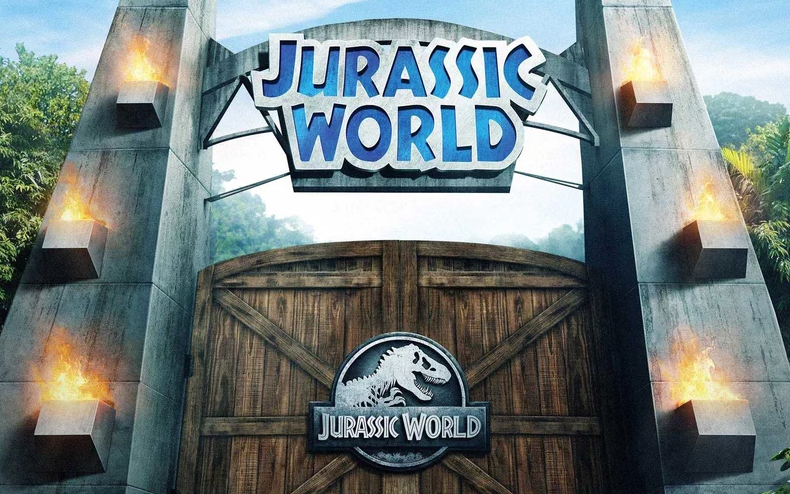 The welcome area of the ride will be totally reimagined to reflect the Jurassic World films. Fans will definitely want to have their photo taken underneath the iconic Jurassic World sign and this will be the place to do it. The queue area will also have lots to keep you entertained, including videos sharing facts about the dinosaurs you’ll meet on your adventure.

Once you’ve braved the Jurassic World ride, make sure you head over to the new “Raptor Encounter” experience where you can get up close to one of the most beloved (but deadly!) velociraptors from the Jurassic World movie- Blue. Have your camera at the ready for this one.

If you’re visiting with little ones, you can keep them entertained in the new, interactive “Dino Play” area. Children of all ages will be able to take part in fun excavations and investigate giant dinosaur fossils.

Want to be one of the first to experience the new Jurassic World ride? Click here, to view our great value Universal Studios Hollywood tickets.