Indulge in extra special spooky delights!
The food and drink at Halloween Horror Nights is half of the fun! And this year’s offerings certainly don’t disappoint.

Of course, part of the attraction is the Halloween-themed treats that the park serve especially during this time of year. Let’s take a look at the various foods and drinks you can enjoy during this year’s event: 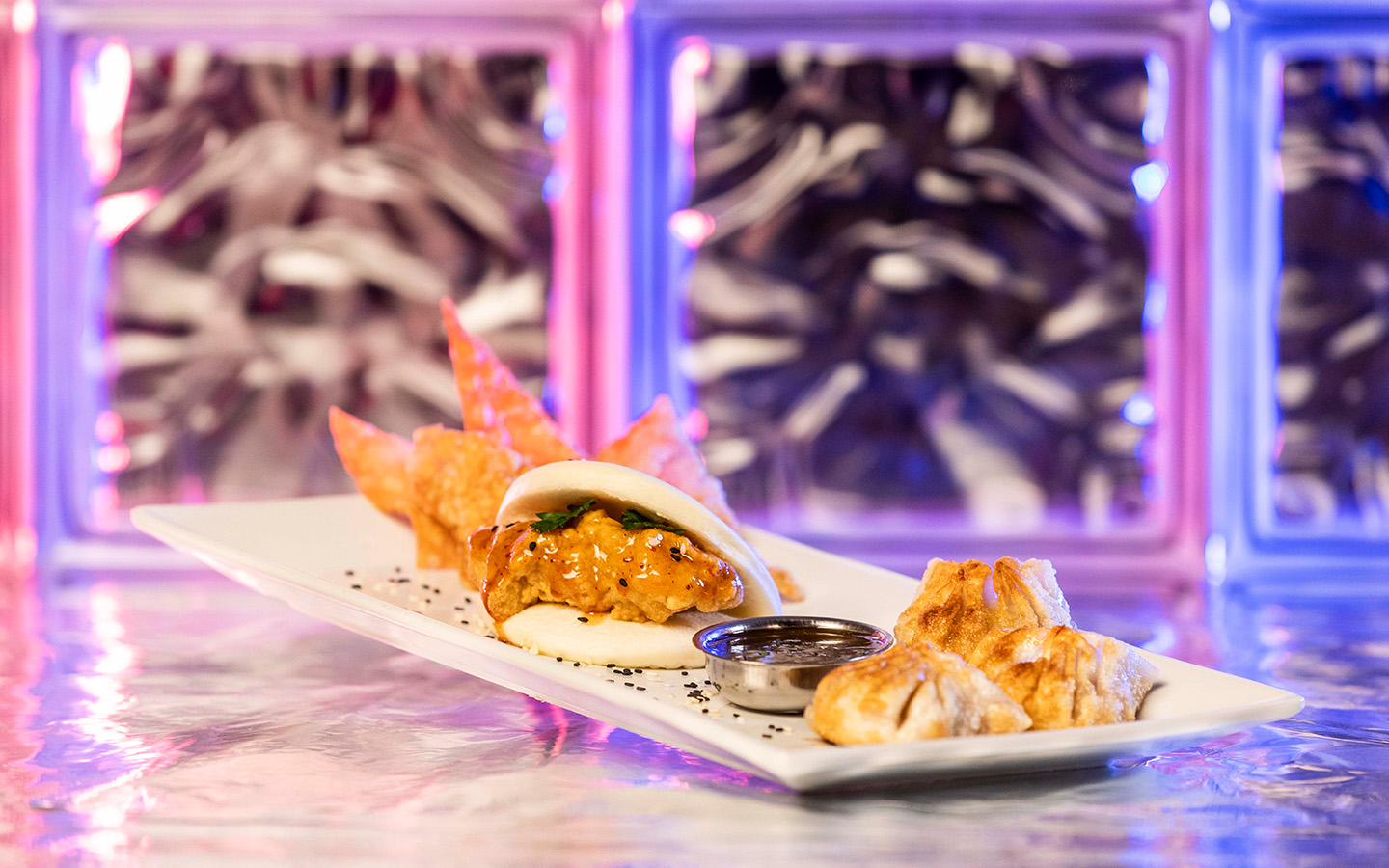 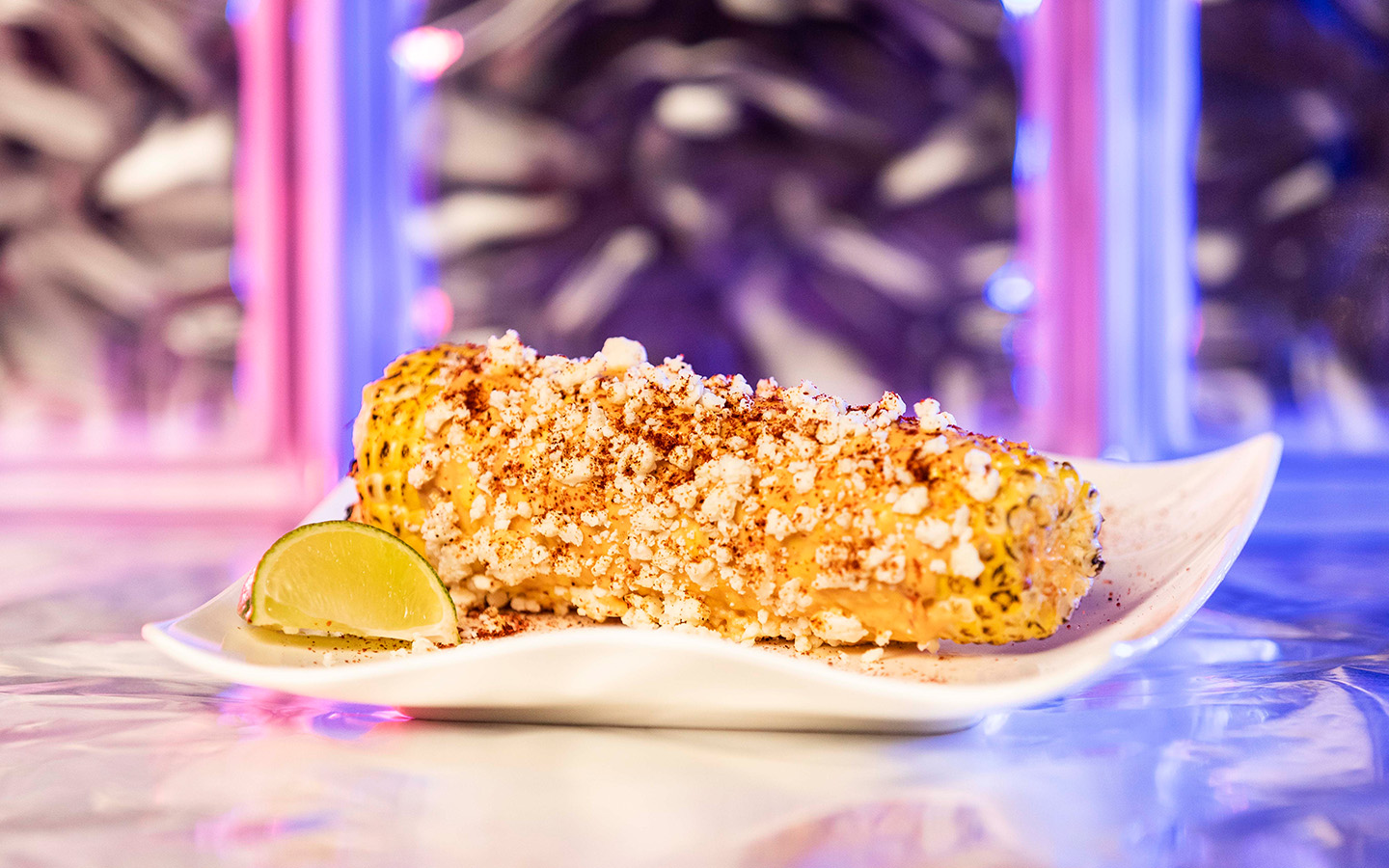 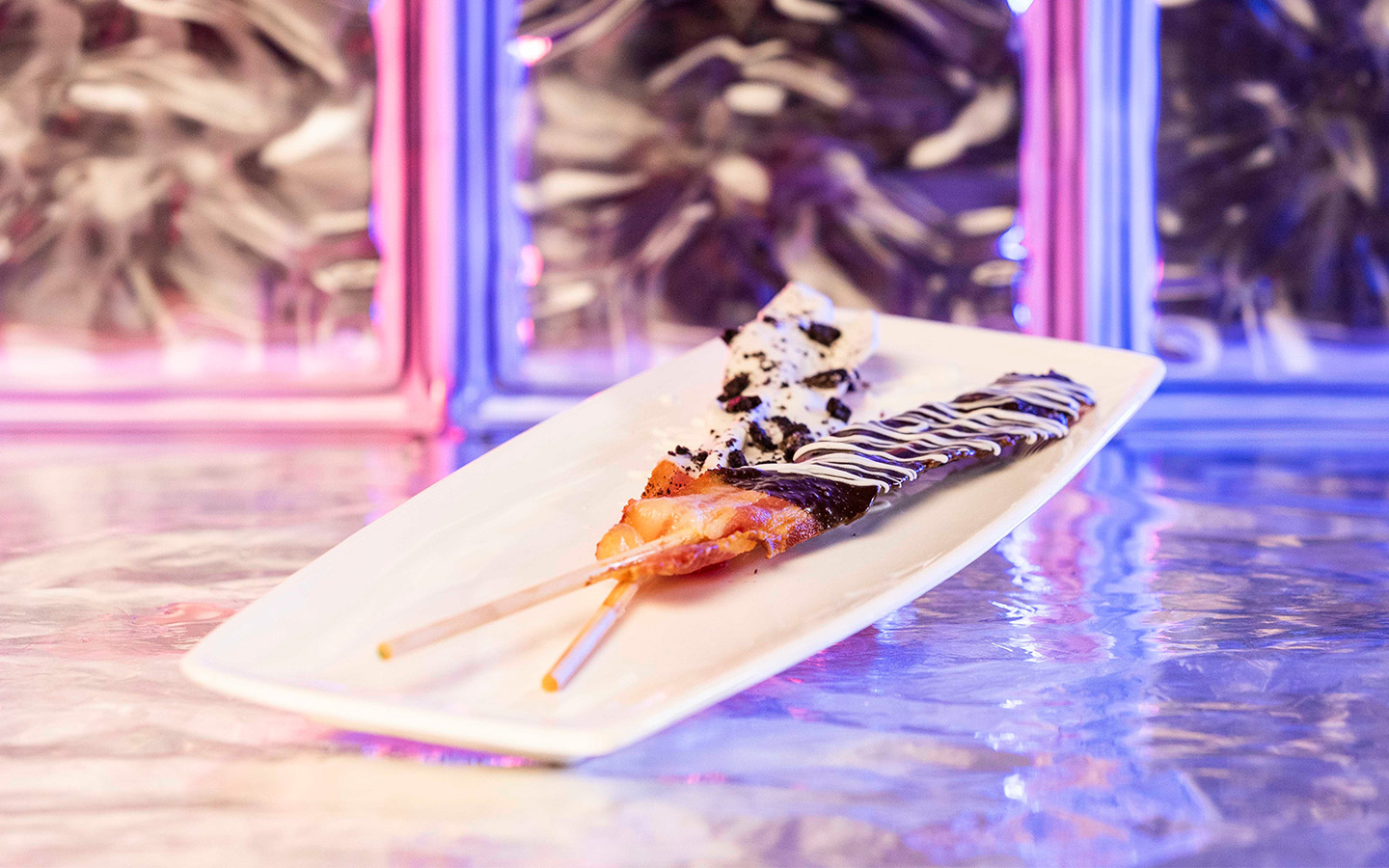 Head back in time to the 1980’s for these iconic mall-dining inspired treats, based on Netflix’s Stranger Things. Choose from Grilled Street Corn or Nachos Queso Fundido at Ole Amigo. Or how about a bento box, with an Orange Chicken Bao Bun, Szechuan Beef Pot Stickers, and fried Wonton Chips, completed with a ginger soy dipping sauce, from the Imperial Panda. Head to Hawkins Heroes if you want a Turkey or Veggie Hero, and for dessert there’s even chocolate dipped bacon on a stick. 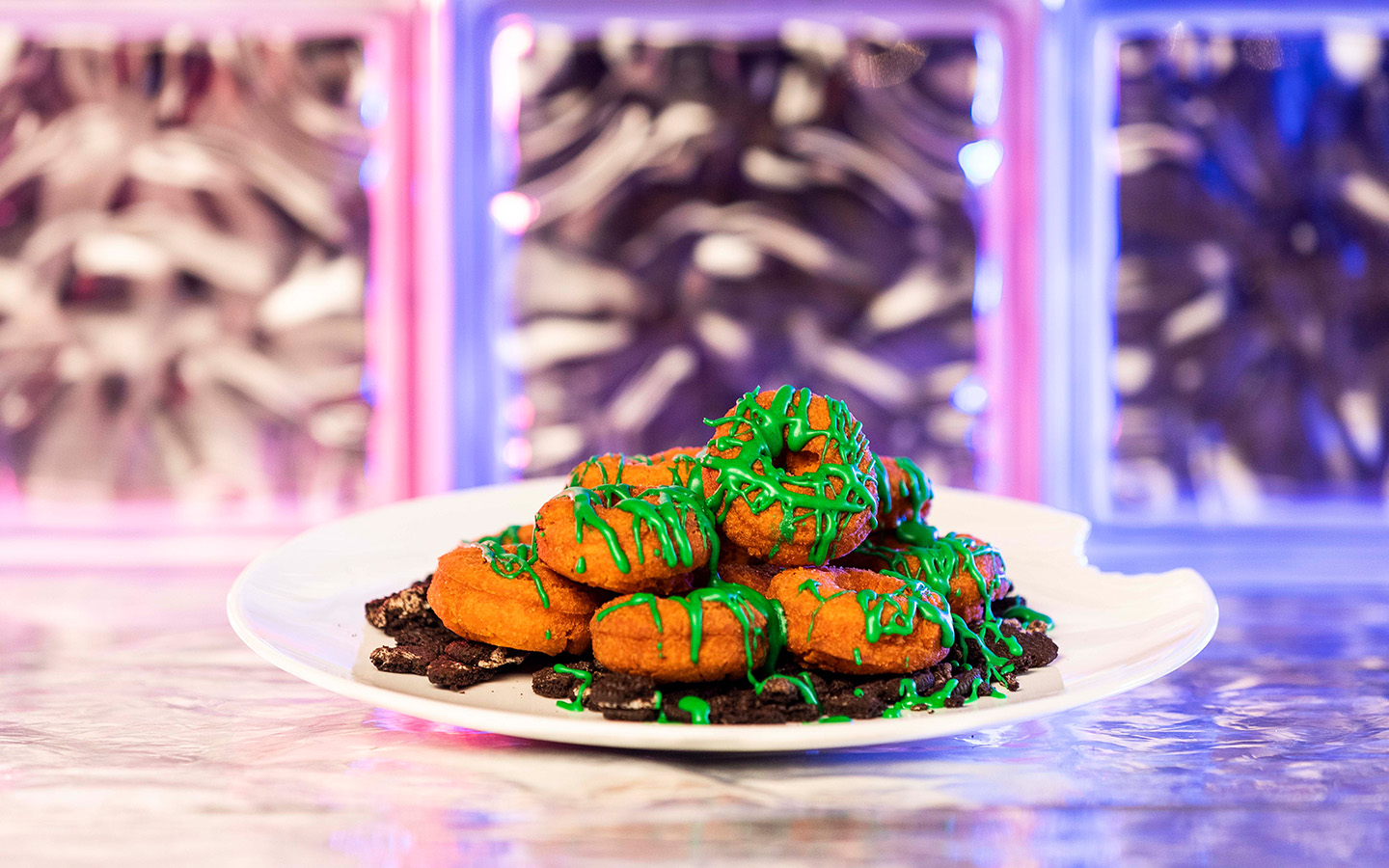 Also in the tents outside Finnegan’s are Merrill’s Mini Pumpkin Doughnuts! Eleven pumpkin-flavored mini doughnuts on a delicious bed of cookie crumbles, all topped with a frosting drizzle. 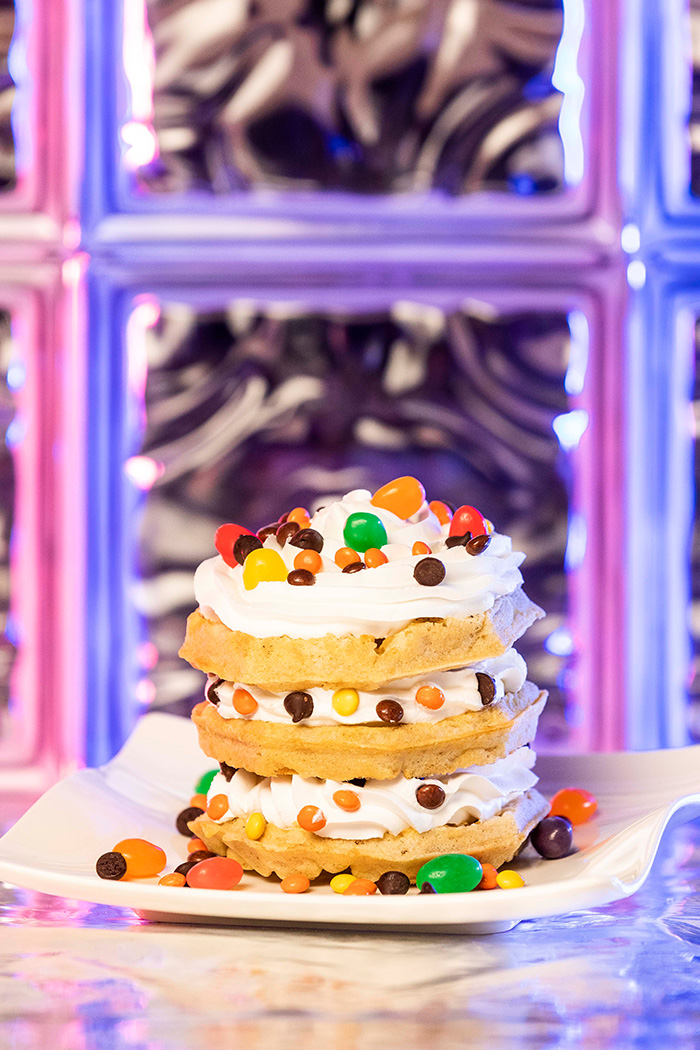 The iconic waffle stack is back! The Triple Deck Extravaganza features not one, not two, but three waffles, with whipped cream and Stranger Things 2 inspired candy. 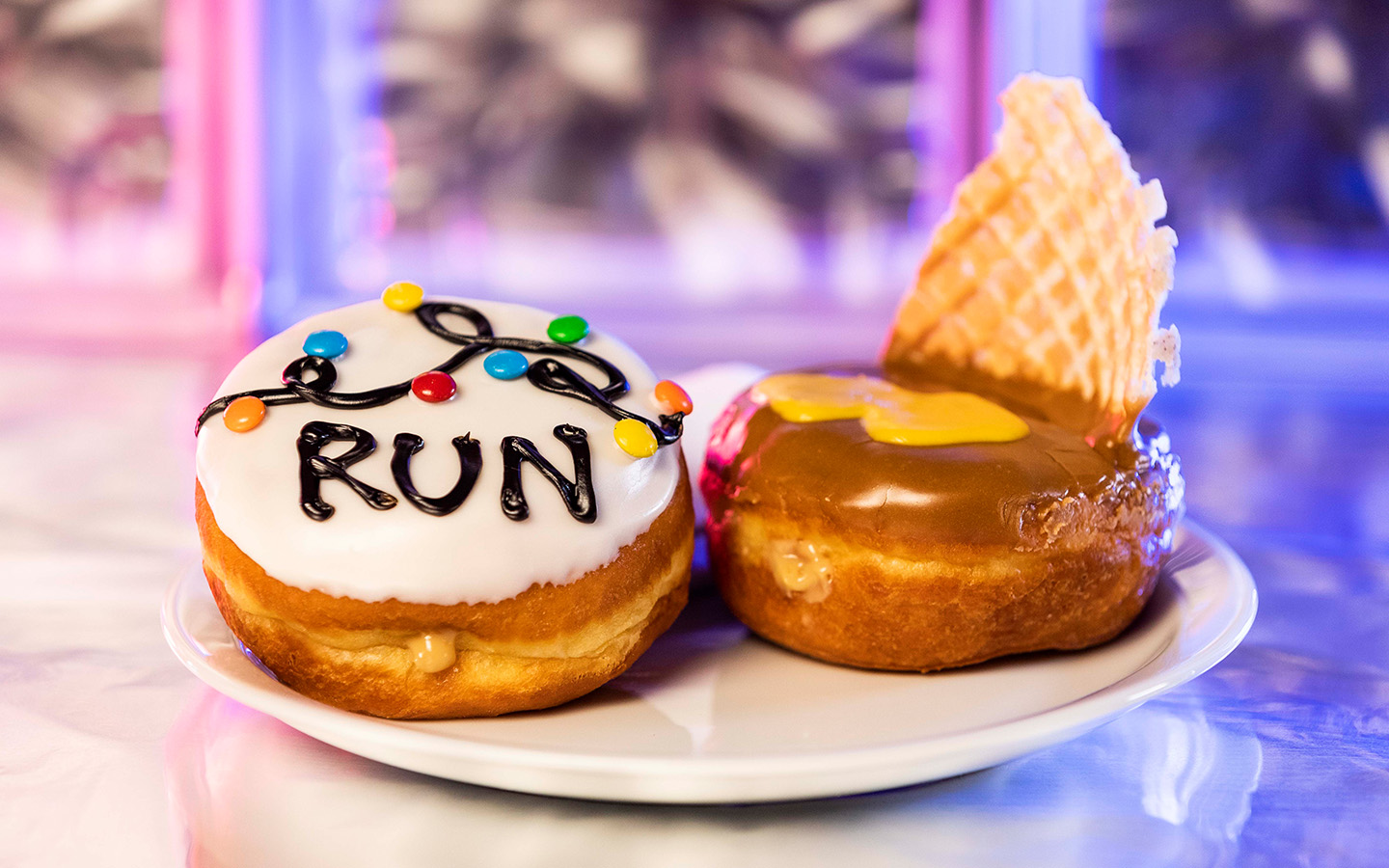 Another returning favourite are these Stranger Things doughnuts. Pick from “Run” or Waffle doughnuts, each filled with Maple Bavarian Cream. Yum! 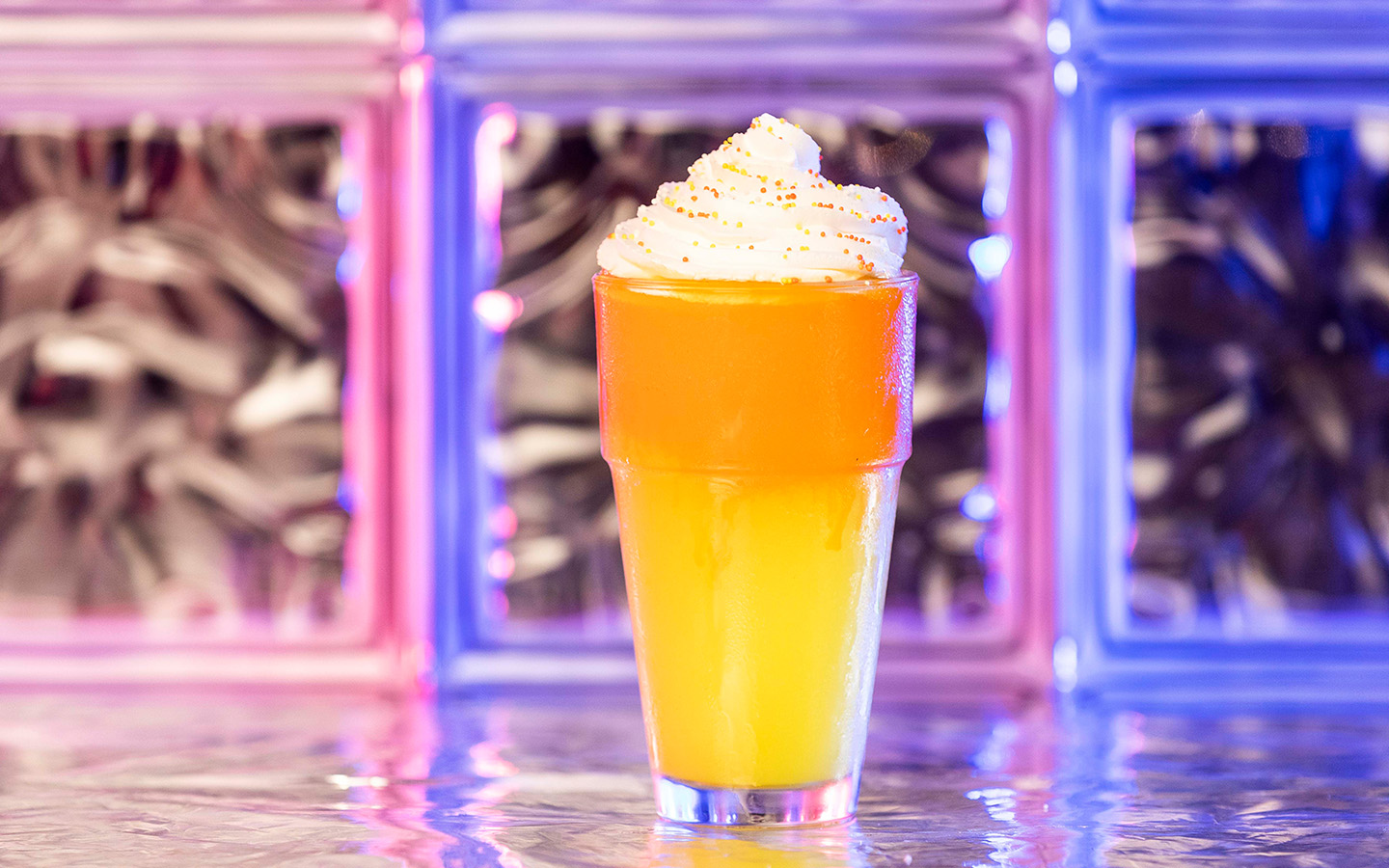 Here, you’ll be able to enjoy the Syrup and Waffles drink, which is a nonalcoholic drink with a blend of flavours, that even has tiny waffles on top. Also at this location is the colourful Candy Corn slushie. Sip on a classic taste of Halloween with this adorable drink. 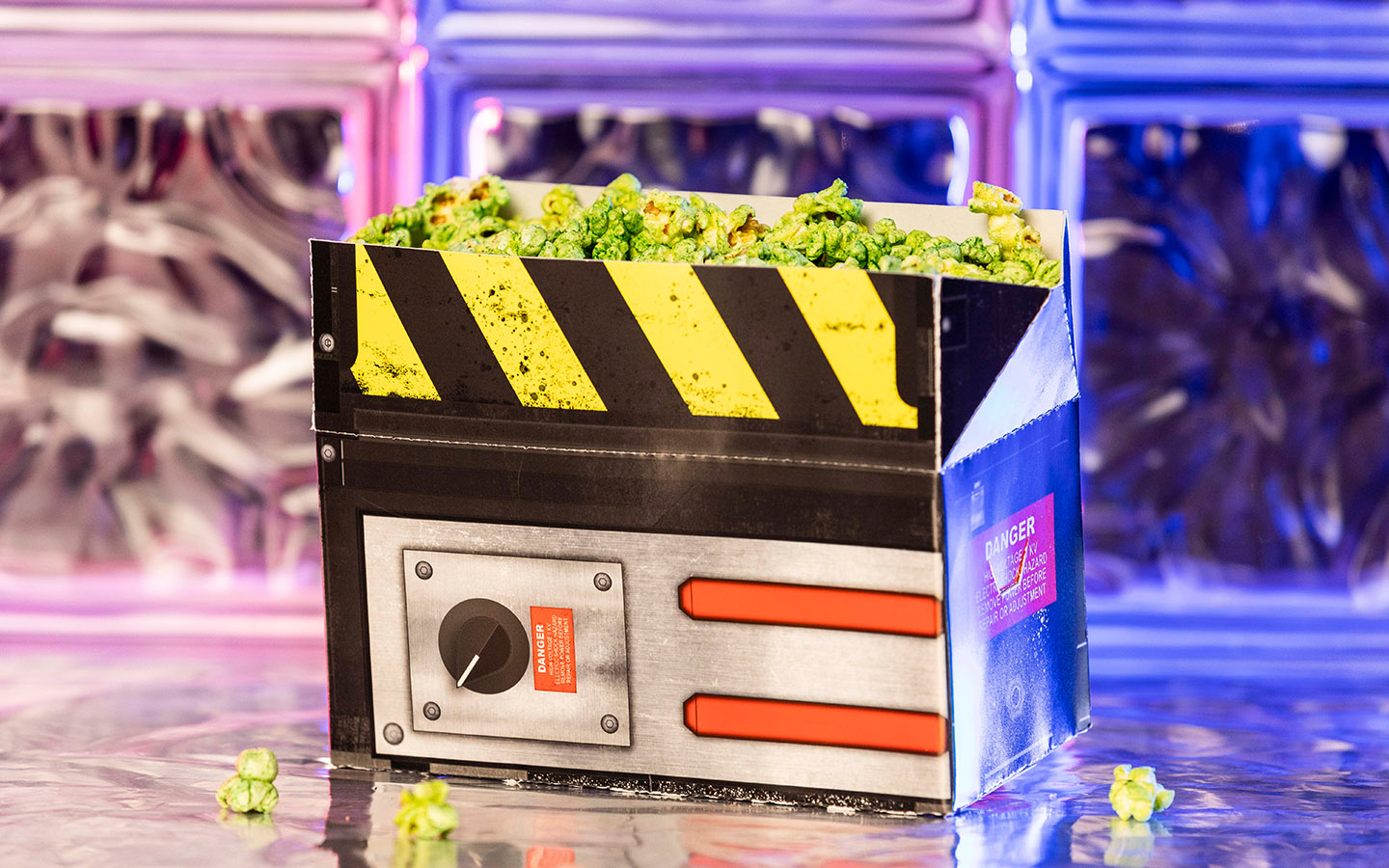 Perfect on-the-go fuel as you visit all those terrifying attractions, this Ghosbusters Ghost Trap popcorn even comes in a containment unit-inspired popcorn bucket! Feel like you’re in the movie itself, as you feast on this tasty snack. 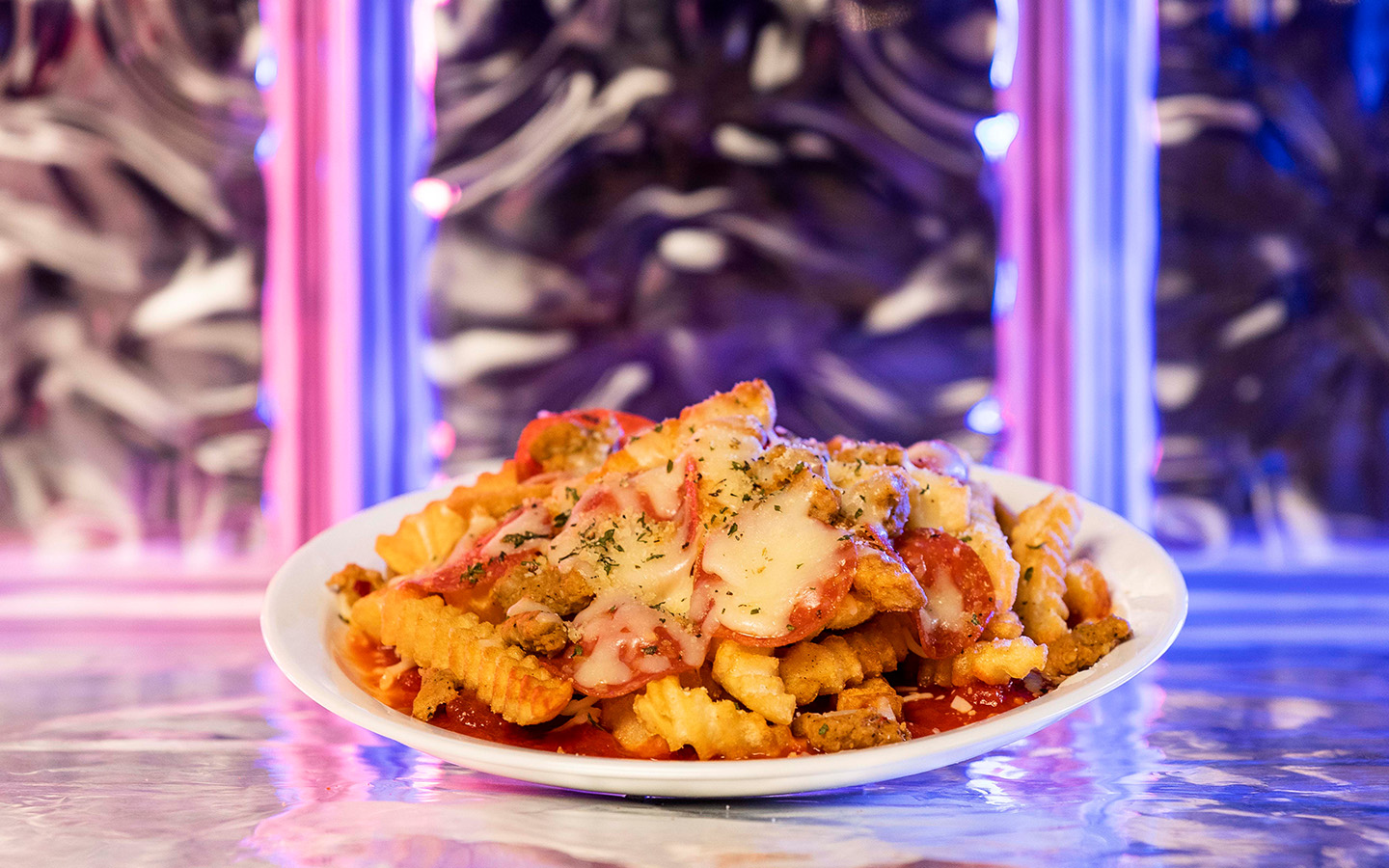 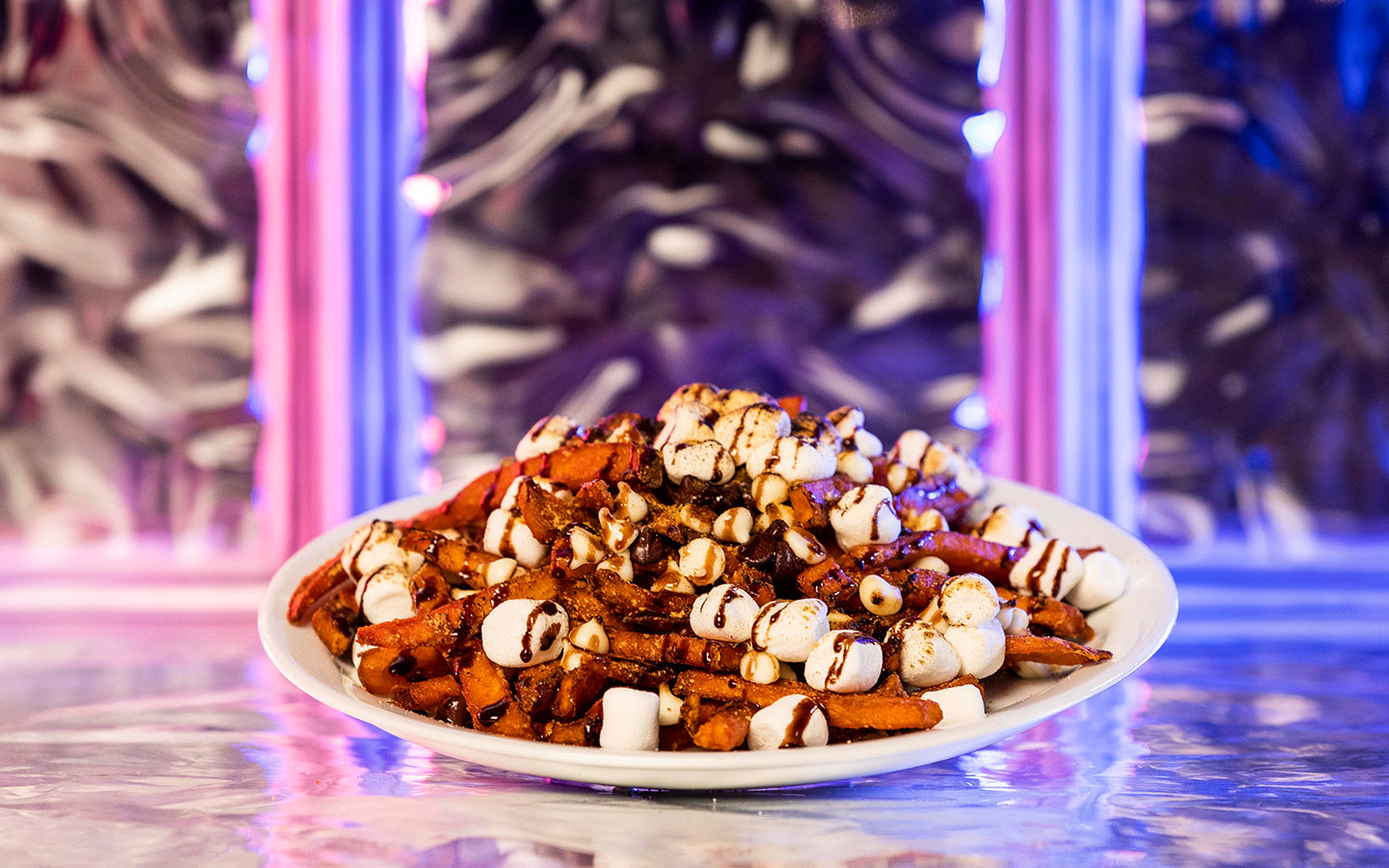 Here is where guests can return to their Halloween Horror Nights favourite - Pizza Fries! However this year, a sweet-counterpart is also on offer - S’mores Fries! This new dish features sweet potato fries, marshmallows, chocolate chips and cracker crumbs. Would you try it? Near to KidZone is also the return of the moreish Twisted Taters - mouthwatering potato swirls with your choice of sour cream & chives, garlic parmesan, seasoned salt, or salt and vinegar. 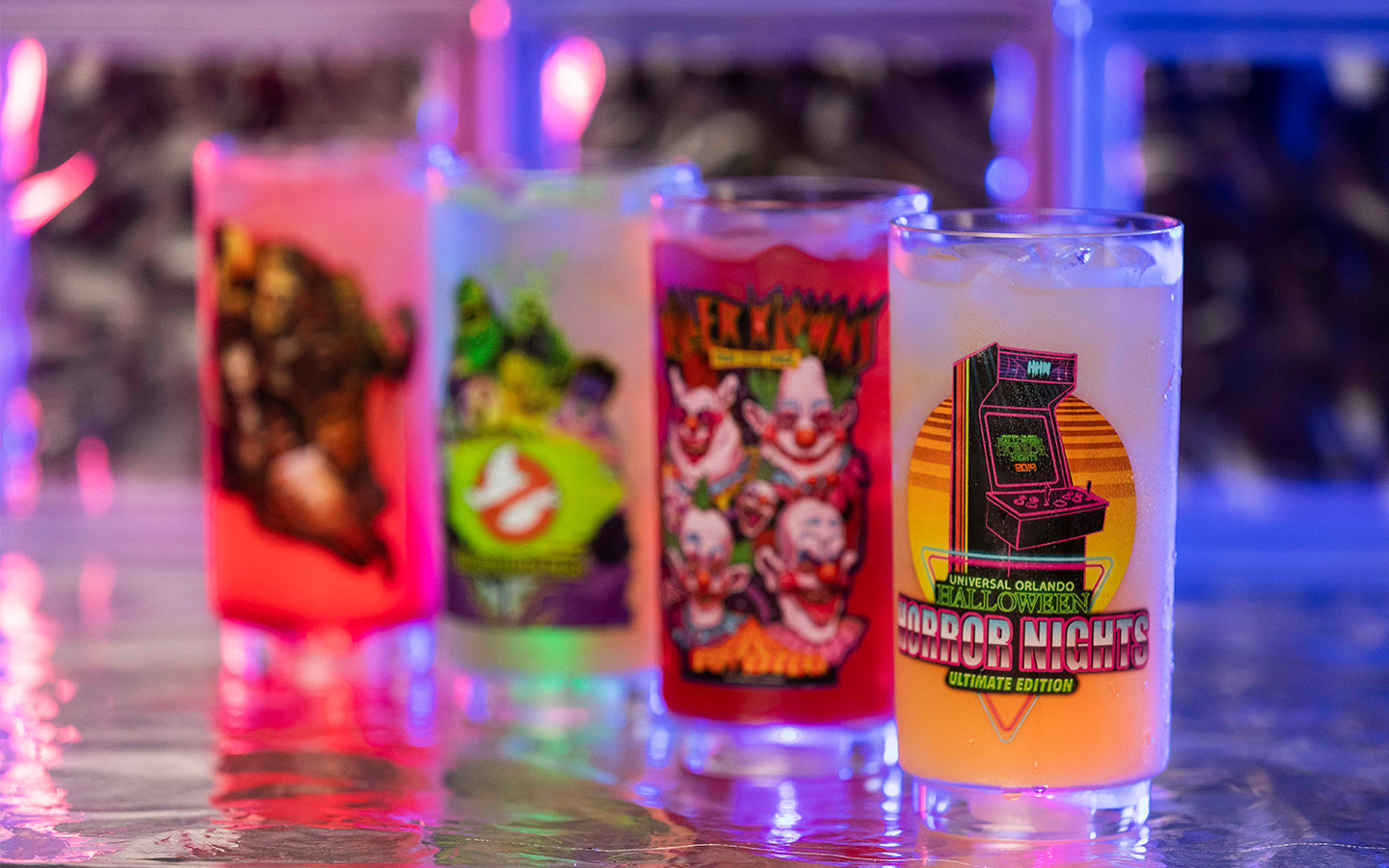 Signature Drinks are back this year, which are also hit among the grown-ups to the Park. This year, there are four to pick from, each inspired by classic 80s beverages. There are also four souvenir cups to collect, which will be a staggered realised, a new one coming out on a weekly basis. Prove that you are the the time ultimate Halloween Horror Nights fan and collect them all! Pick from:

Ready to book your tickets? Click here to browse our latest prices.