Things You Didn’t Know You Could Do in Florida

Discover what you can do in the Sunshine State
From swimming with manatees and visiting the home of Ernest Hemingway, discover the top things you didn’t know you could do in Florida...

Many people only visit the Sunshine State because they’ve bought Walt Disney World tickets, but between days at the theme park, there’s plenty more to see. Florida might not be one of the largest states (it ranks 22nd) but its terrain is vast and diverse. The mysterious Everglades National Park forms the southern tip of the state, and turquoise natural springs can be found across the land. Read on to discover our list of things you didn’t know you could do in Florida.

Visit the town that Disney built 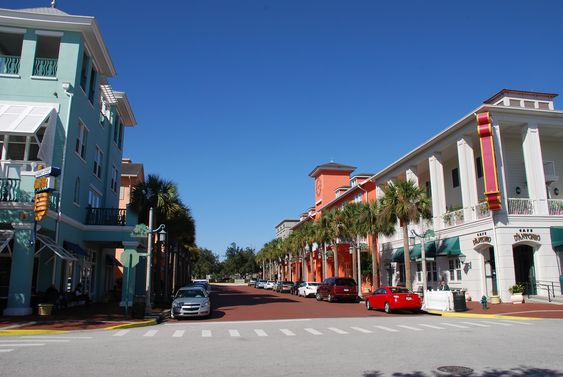 From the moment you set foot in the town of Celebration, you’ll notice there’s something very unique about the place. That’s because it was developed by The Walt Disney Company in the 1990s. The master-planned community was modelled on historical American towns and remains a popular place to visit today. The charming town has pretty, tree-lined streets, spectacular architecture and a friendly buzz. According to Visit Florida, Celebration was even named one of America’s 10 prettiest towns. Discover the town on a self-guided walking tour or hop on a Segway.

Did you know? Disney also built a ‘Singing Runway’ in 1970 for a small aircraft flying between Disney World and airports in central Florida that played ‘Wish Upon a Star’ when the aircraft drove over the grooves at 45mph.

Visit the home of Ernest Hemingway 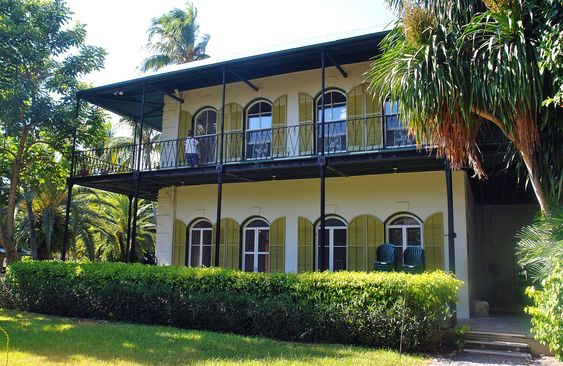 Nestled in the heart of Old Town Key West, discover the home of famous novelist Ernest Hemingway. This unique house was Hemingway’s beloved home for more than 10 years, and it’s said that the author found great solace in the beautiful surroundings of Key West. Hemingway lived here between 1931 and 1939, although he owned the property until he died. It became a designated U.S National Historical Landmark in 1968, preserving this fascinating piece of literary history.

Today, the house is open to anyone who wishes to get closer to the author. Visitors can step back in time and visit the rooms and gardens that witnessed the most important period of the Nobel Prize-winning author’s career, where he penned To Have and Have Not, and short story classics including The Snows of Kilimanjaro and The Short Happy Life of Francis Macomber.

Did you know? Hemingway was given a white six-toed cat, named Snow White, by a ship’s captain and some of the cats who live in the grounds of the house are descendants of that cat.

Kayak through the Everglades National Park 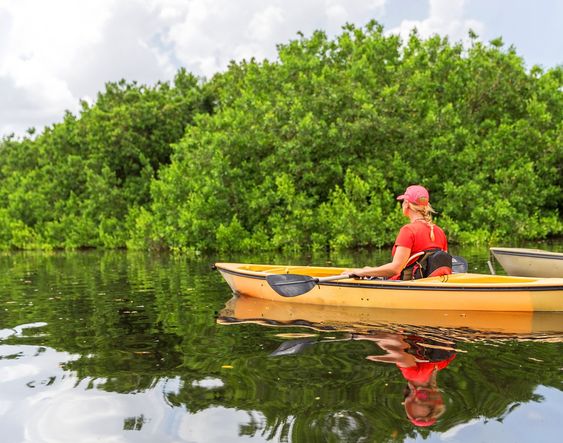 Experience the beauty of the Everglades on a kayaking tour. Wade through freshwater marshes, dense mangrove forests and the beautiful open waters of Florida Bay on the trip of a lifetime. There are dozens of designated kayaking trails through the Everglades National Park ranging from starter trails for inexperienced kayakers to challenging routes for avid explorers.

The Everglades cover more than 1.5 million acres, forming much of the southern tip of the state. It is one of the most spectacular national parks in the United States and certainly one of the wildest, but kayaking is a wonderful way to truly get to know it. An abundance of species call the Everglades home, so look out for dolphins, alligators, bald eagles, sea turtles, manatees and herons during your paddle. One of the best ways to ensure you make the most of your trip to the Everglades is by booking a guided tour with experienced naturalists who know the area better than anyone.

Did you know? An estimated 200,000 alligators live in the Everglades. 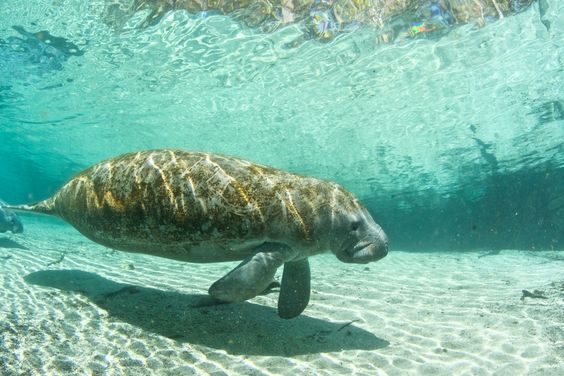 Manatees, nicknamed sea cows due to their docile demeanour, are gentle marine mammals that patrol the waters of Florida. These adorable creatures can often be spotted in the shallow blue waters surrounding mangroves, such as those found near the city of Crystal River. The warm spring-fed waters are home to hundreds of manatees during the winter when the Gulf of Mexico cools, and here you can swim with these lovely animals.

To find out more about swimming with manatees in Florida, we spoke to Brandie, a spokesperson for Riverventures: “Swimming with manatees is a unique privilege that we have here in Citrus County, and it’s unlike any other wild animal encounter that we are aware of. We do have rules to follow out there, but they’re all based on respect. We are visitors in their home, so it’s important that we are respectful. 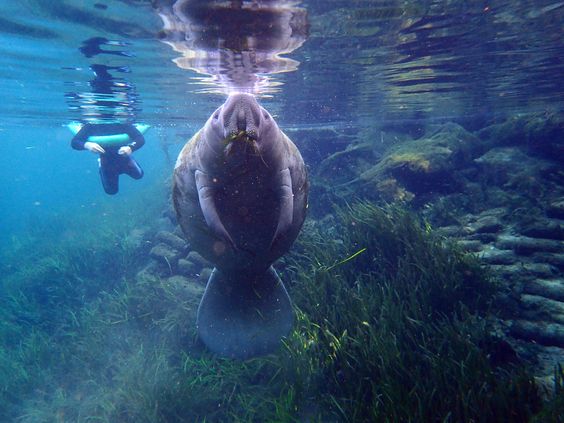 “The warm spring water is the reason the manatees come here to survive during the cold weather. When it is very cold, we have the highest number of manatees congregated around a natural spring source on the planet! The sight is unbelievable. When it is warm, we have a small population, but can typically find at least a few, regardless of the season.”

Visiting early in the morning, just after sunrise, helps to avoid crowds of people and the colder it is, the more manatees you’re likely to see, explains Brandie. “Right now, the population of the Florida manatee is hovering somewhere between 5,000 and 6,000. They were downgraded from endangered to threatened species two years ago, but are still facing many challenges.

“If one is hoping to swim with manatees in their natural habitat then visit Crystal River year-round, or the Homosassa springs in the winter. And please, seek out a reputable operator with legal permission to operate in these protected waters. Find a company that provides an in-water guide and practices ‘passive observation’.”

At Attraction Tickets Direct Ireland, we offer opportunities to swim and snorkel with manatees in their natural environment, and learn more about these majestic creatures under the guidance of trained and certified guides.

Did you know? Manatees evolved from the same land mammals as elephants over 50 million years ago. 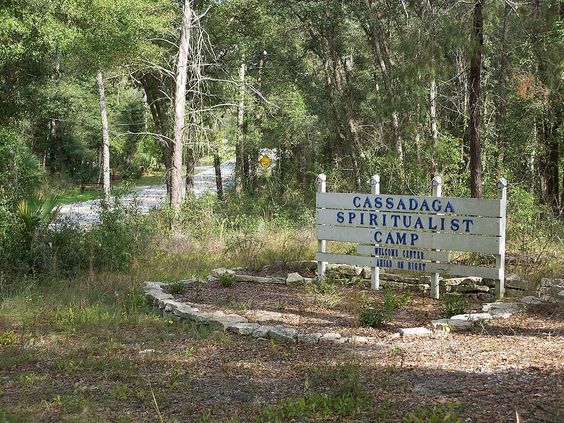 Cassadaga, a Seneca Indian word meaning ‘Water beneath the rocks’ is renowned for its community of psychics and mediums. This fascinating town is the place to go to discuss your past and future. The spiritualist camp was established in the 1870s when the Southern Cassadaga Spiritualist Camp Meeting Association was founded by George P Colby, a trance medium. As word spread, more people travelled to the area and the community was established.

There’s plenty to see and do in this unusual town. Look out for the Colby Memorial Temple, Cassadaga Hotel, community library, Caesar Forman Healing Centre, bookstore and the Colby-Alderman Park. If you are curious to meet a medium or psychic to discuss your life, it is possible to make appointments with specialists in Cassadaga.

Did you know? Cassadaga is considered the psychic capital of the world.

Stay young forever at the Fountain of Youth

You may have heard the stories of a Fountain of Youth, that supposedly restores the youth of anyone who drinks or bathes in the waters. But did you know it was in Florida? The city of St Augustine is home to the Fountain of Youth Archaeological Park, a tribute to the very place where Spanish explorer Juan Ponce de Leon, who is said to have searched for the Fountain of Youth when he travelled to what is now Florida in 1513, searched. Legend has it Ponce de Leon was told by Native Americans that the fountain was in Bimini (the Bahamas).

Today, the public can visit the site of Ponce de Leon’s visit to learn all about its history and the stories behind the Fountain of Youth. This fascinating and slightly bizarre attraction is well worth a visit if you’re on holiday in Florida.

Did you know? Ponce de Leon was the first European to step onto Florida land. 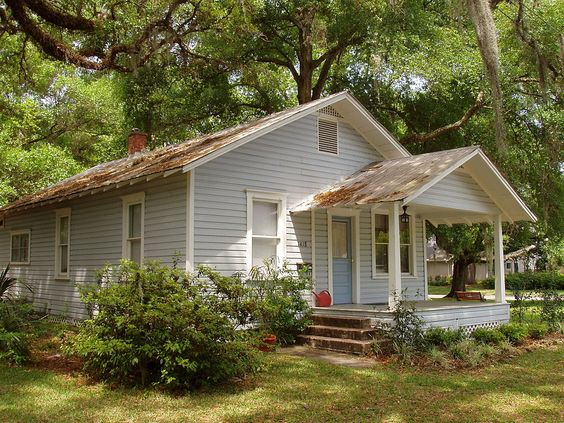 Visit the final home of renowned author Jack Kerouac. The house, located in Orlando, still marks the author’s passing and remarkable career and is a popular site for fans of his work. Although modest, the house is in a beautiful spot shaded by trees. Kerouac lived here with his wife and his mother, and it was here that he penned The Dharma Burns. After his tragic and sudden death in 1969, the home stayed with his family. Today, the property is run by Friends of Jack Kerouac as a writers’ residency called the Kerouac Project, where writers can live expense free for three months while developing new work. In 2013, the house was added to the National Register of Historic Places.

Did you know? Jack Kerouac typed up his novel On the Road on one continuous scroll of paper that measured 120 feet. 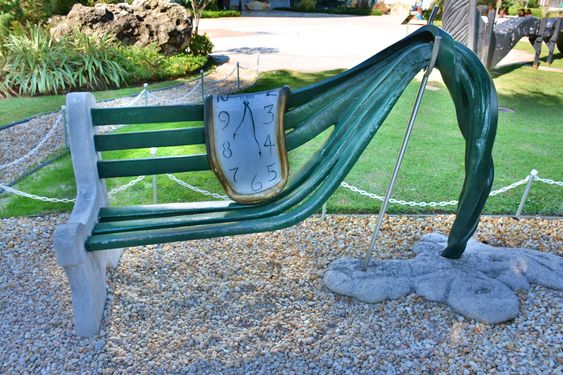 Admire the works of surrealist artist Salvador Dali in St Petersburg. For art enthusiasts or anyone with a keen eye for the unusual, the museum houses the largest collection of Dali’s works outside of Europe. Salvador Dali was a prominent Spanish surrealist artist, born in Catalonia. His extensive repertoire included works of film, sculpture and photography. Perhaps his most famous work is The Persistence of Memory, in which melting watches and clocks appear in an otherworldly landscape. If you’re seeking something different during your visit to Florida, exploring the works of Dali is an excellent way to step out of everyday life and into the mind of an artistic genius.

Did you know? Dali’s body was embalmed before being buried beneath his museum in Figueres Catalonia. After a recent exhumation, it was revealed that his iconic moustache was still intact.

So, there you have it! There’s so much to see and do in Florida in your spare days before or after visiting Walt Disney World. We hope you have a wonderful time!