Eight Ways To Do Universal’s Mardi Gras Like A Pro

Now in its 25th year, Universal Orlando’s Mardi Gras festival is a highly anticipated event with fab dining, an outrageous parade, and, of course, strands and strands of bead necklaces! With so much going on, it’s easy to get overwhelmed. But you’re going to do Mardi Gras like a pro, and we’re going to tell you how.

Dine The New Orleans Way: There are a slew of scrumptious dining delights during the Mardi Gras event (after all, it’s a festival dedicated to indulgence!) and you’re going to want to try several. Best way to do it? Purchase a Tasting Lanyard. This gives you access to 10 samples, including 3 kinds of Po’Boys (shrimp, catfish, or chicken and Andouille sandwich), beignets, King Cake, tater twists and both alcoholic and non-alcoholic beverages.

Our Pro Tip: Don’t leave your sampling until later in the evening, as queues get long after 6pm. 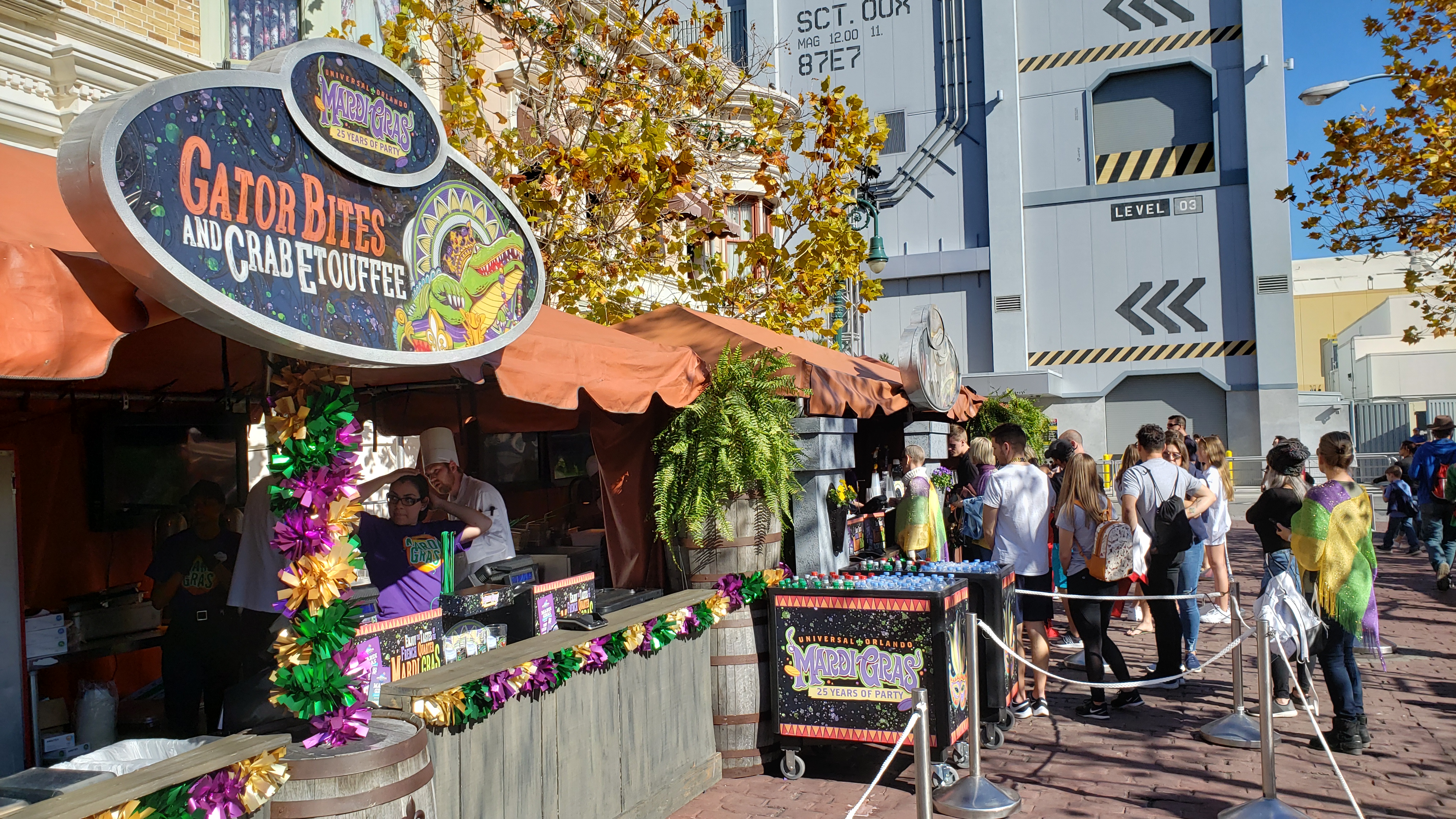 Go Whole Hog (or, rather, Whole Boil): It ain’t N’awlins (New Orleans) without a shrimp boil, and while Universal’s doesn’t involve a beach, a big kettle of boiling water, and whatever shellfish came out of the day’s catch, the Bayou Boil’s outcome is the same:  succulent crawfish (call ʼem crawdaddies, call ʼem crayfish; it’s all the same), peel-and-eat shrimp, tender corn on the cob, sausage and hearty redskin potatoes.

Can’t have or don’t want shellfish? Chicken and Andouille jambalaya, a New Orleans speciality, is available instead, but take note, that is all you’ll receive, unless you can eat the side dishes that have been boiled with the shellfish. Tickets for the Bayou Boil are available for select nights in February and March, with reservations beginning at 2.45pm. You’ll also get access to a VIP parade viewing area with your ticket, and a dessert party with King Cake Cupcakes, beignets, prosecco and soft drinks ($59.99 adults, $39.99 children).

Our Pro Tip: Book the earliest time available, digest for a couple of hours, arrive at the dessert party as soon as it opens, then stake out one of the benches in the VIP area for an up-front view of the parade. 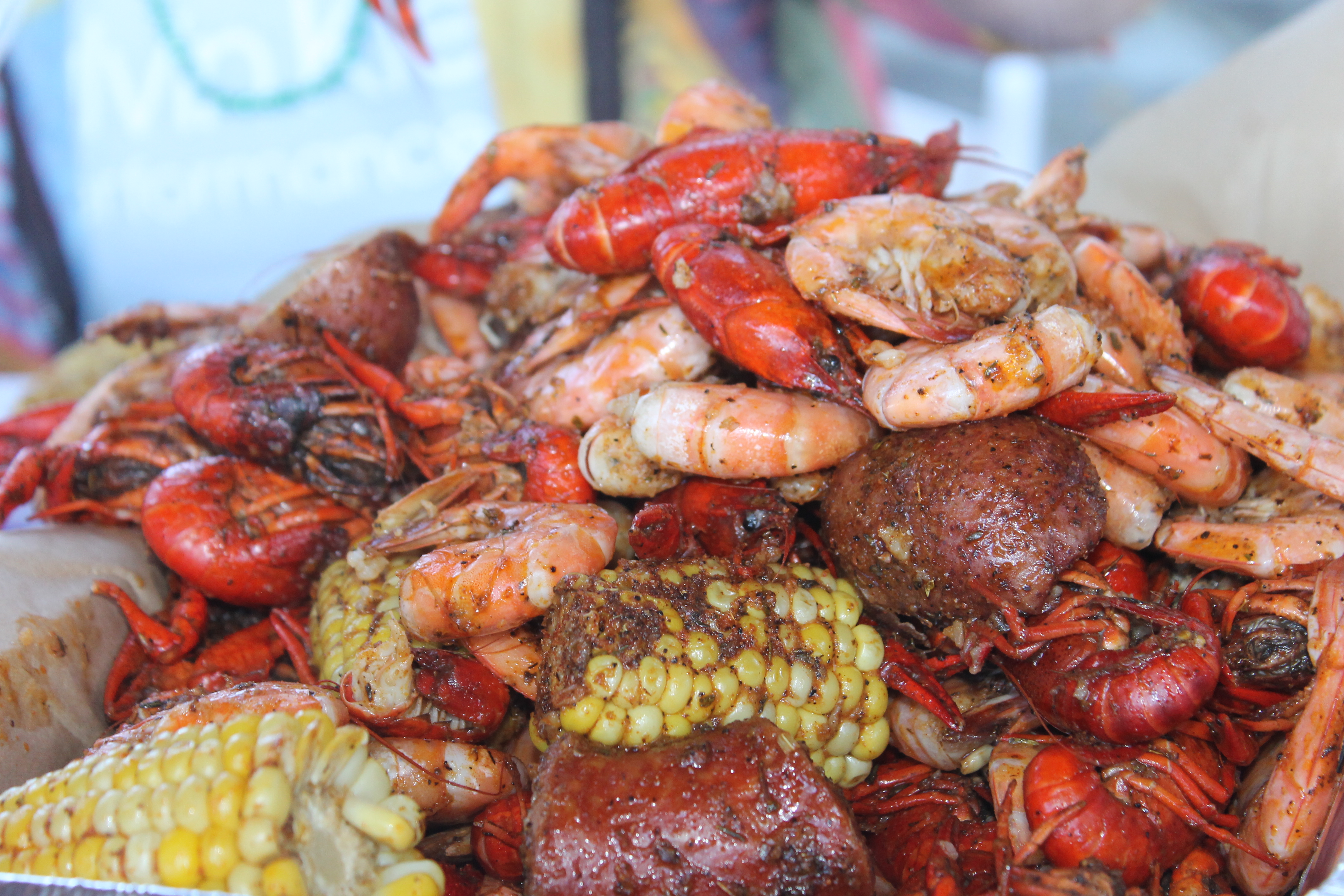 Scarf Down Some King Cake: Yes, we know, Mardi Gras means bead necklaces, big floats, and tipsy heads, but let’s be honest: it’s really all about the King Cake. Happily, you can have your cake and your parade goodies, too. Purchase tickets for the Mardi Gras Feast and Floats Dessert Party and get access to a special section for viewing both the parade and the nightly Universal Cinematic Celebration lagoon show, along with beignets, King Cake and other themed desserts, sparkling wine, soft drinks and sparkling cider ($49.99 per adult, $29.99 per child).

Our Pro Tip: The Dessert Party doesn’t run every night, so be sure to plan your Universal day accordingly!

Marvel at the parade floats: This really goes without saying, but since the next two segments won’t make sense if you don’t know Mardi Gras involves massive, highly decorated floats that parade down the streets of New Orleans (and, naturally, through Universal Studios), we’re saying it anyway. Stake out your spot well in advance of the nightly parade, and while you’ll be tempted to snap several photos, you’ll want your hands free for a far more important task, which we’ll mention next…!

Our Pro Tip: The parade route is long, so it’s not difficult to get a good spot, but if you arrive early and find a place to the right of Café La Bamba you’ll get double-dips at the beads, as the parade starts and ends in the same place. 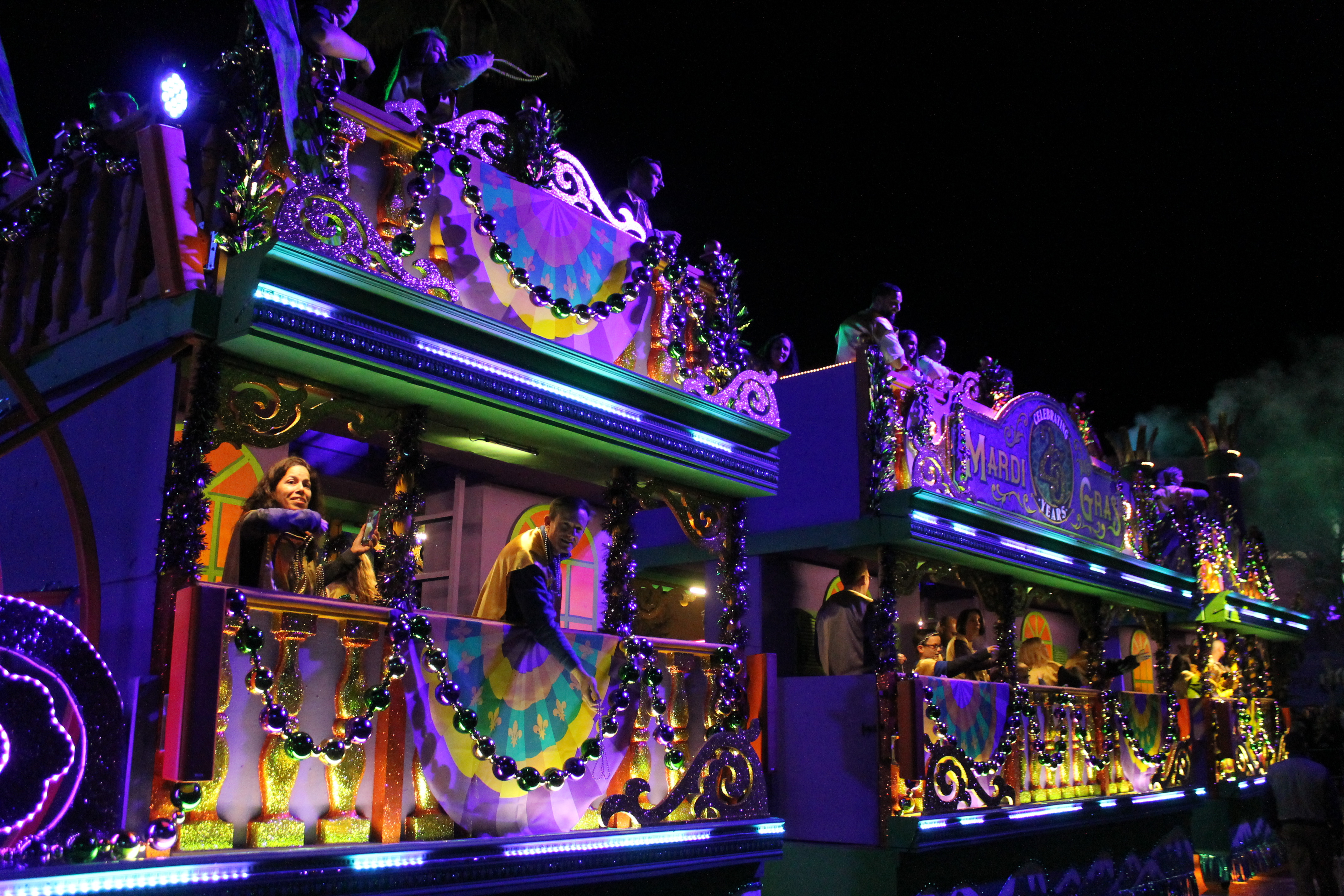 Catch Those Beads!: One of the most memorable parts of the entire Mardi Gras festival is catching bead necklaces thrown from the parade floats, and it’s likely you’ll go home with a dozen or more stands.  All you have to do is line up along the parade route, hold up your hands, and catch!

Our Pro Tip: Wave wildly to catch the bead-throwers’ eye, but pay attention to the people around you and try to avoid whacking them in the face. It’s a serious party atmosphere (family-friendly, of course!) and it’s easy to forget your etiquette. There are plenty of beads to go around, so don’t shoot an arm out in front of your competition, and, for safety’s sake, DO make sure children don’t scramble into the street to grab miscast necklaces. They can pick them up after the floats have gone by. 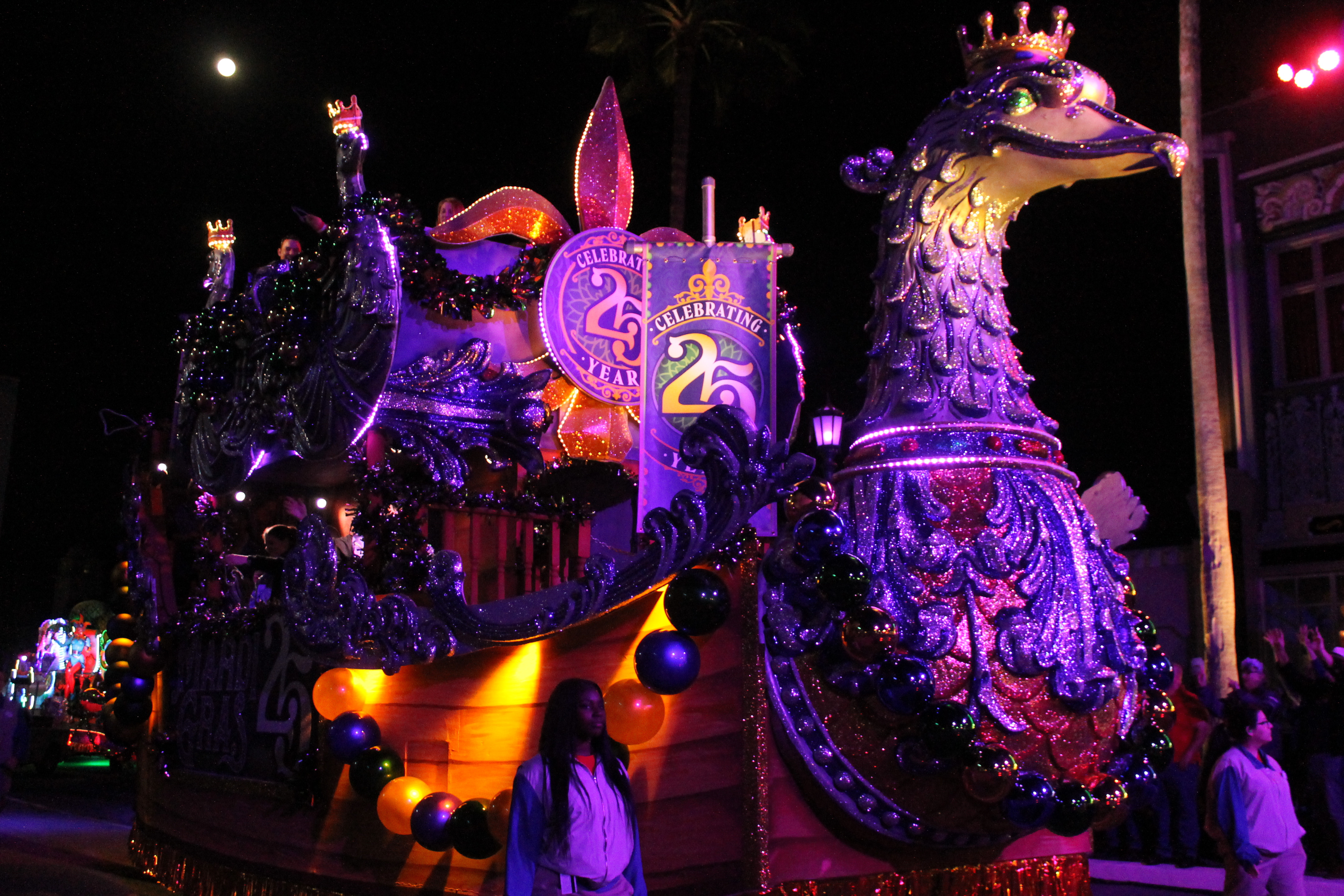 Throw Those Beads!: What’s better than catching dozens of bead necklaces? Throwing them, that’s what! Take note, participating in this experience takes 2-3 hours, so plan any meals or restroom breaks accordingly. If riding on one of the floats and throwing beads is on your Bucket List, here’s how to increase your chances of being chosen:

Bead throwing is a lot harder than it looks, so prepare for the shame of launching a few necklaces miles from your intended target, and don’t hold it against yourself if you accidentally hit someone smack in the face. It happens to the best of us.

Our Pro Tip: Make this opportunity a priority! Really, just do this. You and your fellow bead-throwers will form a bond of camaraderie, and you’ll never forget the smiles on people’s faces as they shout the time-honoured New Orleans phrase, “Hey Mister, throw me some beads!” It’s truly a special experience. 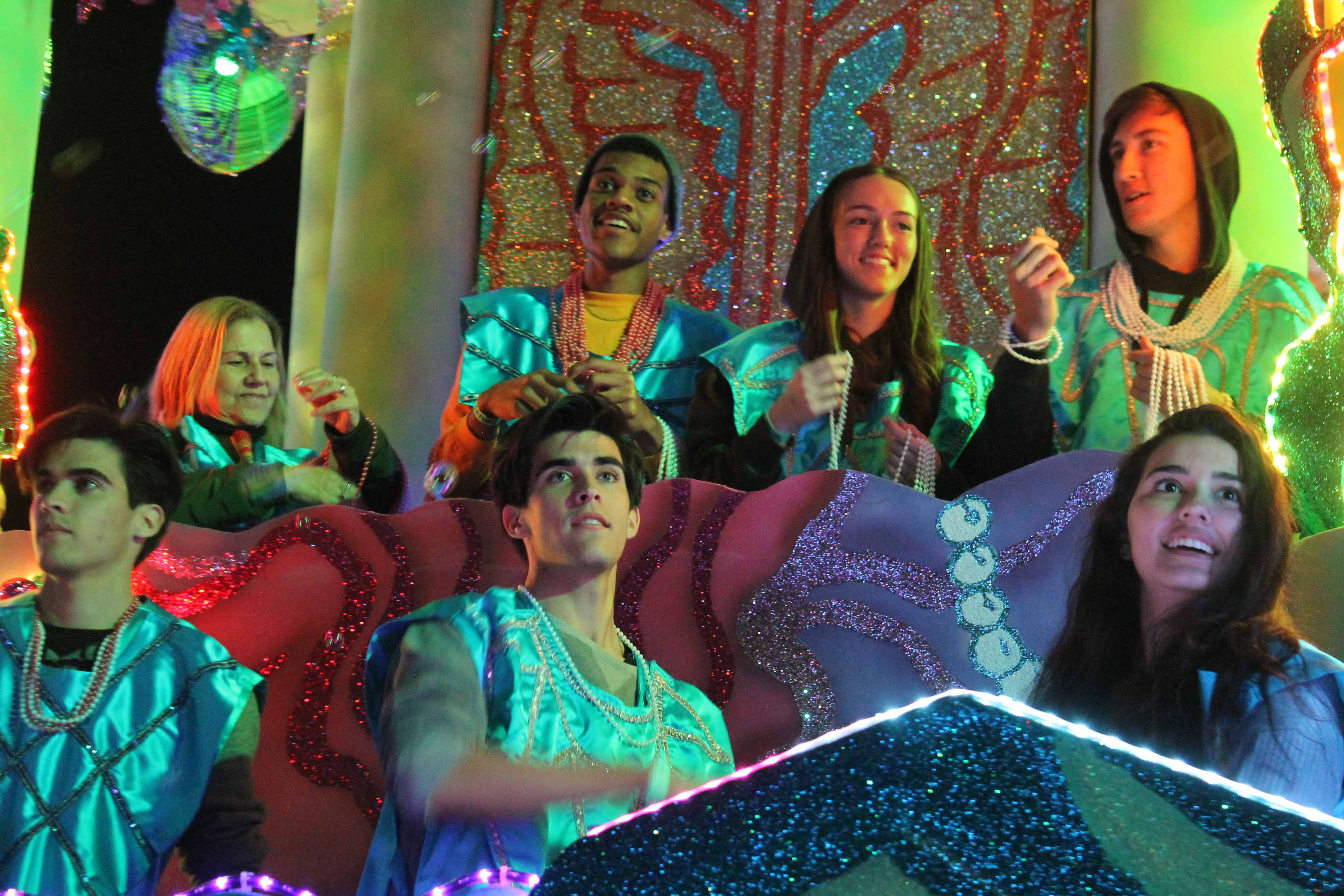 Snag A Kid-Friendly Viewing Area: Head over to the Brown Derby Hat Shop and let the young’uns watch the parade from the Little Jesters viewing area. They’ll have an unobstructed view, with no tall people in front of them grabbing the loot.

Our Pro Tip: Bead-throwers know where the kid section is, and they’re especially eager to put a smile on little guests’ faces. That means LOTS of beads!

Rock Out At A Concert: Time your visit to Universal’s Mardi Gras celebration for a Friday, Saturday or Sunday. Yes, it will be busier than on weekdays, but you’ll have the benefit of begin able to take in a (totally free) headliner-act concert. Among this year’s acts are Kool & the Gang, Diana Ross, REO Speedwagon, and Earth, Wind, and Fire. Concerts start at 8.30pm, and standing-room-only access is first-come-first-served.

Our ultimate Pro Tip? Visit twice. Spend your first day enjoying the rides and attractions, then dine around the Mardi Gras offerings and take in the parade. During your second visit, arrive around 4.30pm, specifically for the concert. People will start staking out their spots as early as 5pm, and if you wait until the last minute you’ll struggle to get near the concert area at all!
Mardi Gras at Universal runs nightly from February 1 to April 2, as does the parade. Remember, concerts are Friday through Sunday only. All are free with your theme park admission.