Brand new details and picture revealed!
Universal have just revealed what the theming of their new Harry Potter ride will be like and we think you’re going to love it…

In February, Universal made two huge announcements for their highly anticipated Harry Potter-themed roller coaster. They confirmed that the official name for the new ride would be Hagrid’s Magical Creatures Motorbike Adventure, and that it would open to the public in just a few months’ time on 13th June at Universal’s Islands of Adventure! Now, Universal have shared some exciting new details on what the ride will be like and it sounds like it’s going to be out of this world! 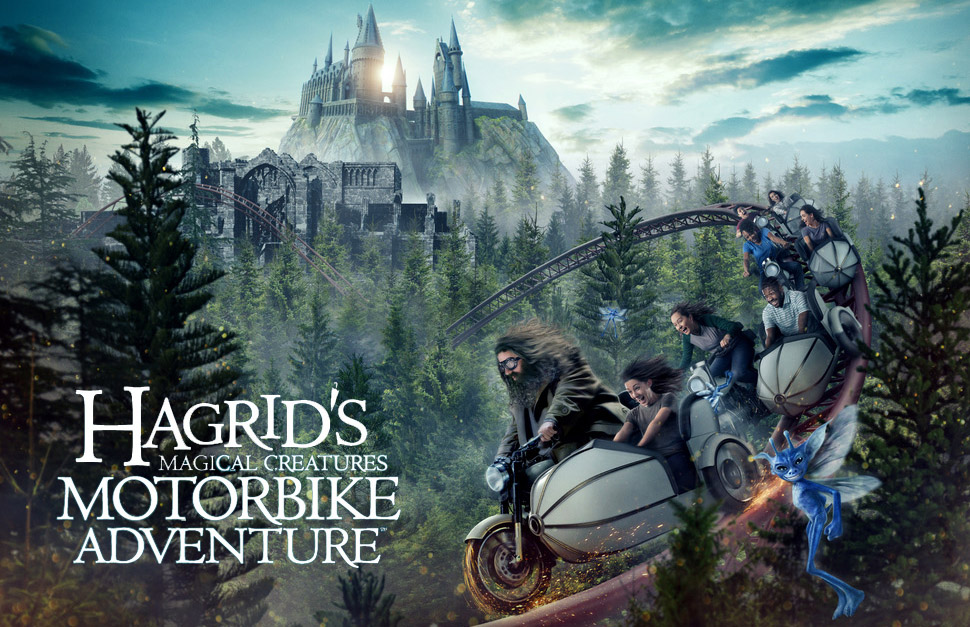 The experience begins with you attending one of Hagrid’s Care of Magical Creatures classes. This is where you’ll board an enchanted motorbike that will take you on an epic adventure like no other. You’ll be able to choose whether you want to take control in the driver’s seat of the motorbike or sit in the adjacent sidecar. Each seat offers a different ride experience, so you’ll want to ride this attraction at least twice to try out both seats for yourself.

The magical motorbike will send you soaring through the sky over the grounds of Hogwarts and into the Forbidden Forest. As you venture deeper into the dark forest, you’’ come face to face with some of the rarest magical creatures in the wizarding world. You can expect to get up close to Cornish Pixies, Centaurs and Fluffy- Hagrid’s famous three-headed dog. Alan Gilmore (Art Director for the Harry Potter films) has been highly involved in creating this new attraction and he revealed that the ride will also feature an appearance from a magical creature that has never been seen in the movies. We can’t wait to see what it is!

While most of the creatures that reside in the Forbidden Forest are familiar with Hagrid, there are some that don’t take to well to intruders and as often the case with Hagrid, things don’t also go to plan. So, expect the unexpected!

Hagrid’s Magical Creatures Motorbike Adventure combines a new level of storytelling and innovative coaster technology with impressive sets and rich environments, including a real forest. That’s right, the Forbidden Forest will be made up of more than 1,200 live trees, which will really bring to life this iconic location.

Get ready for an incredible adventure that lets you “feel the freedom of flight” as you twist, turn and rush forwards & backwards at speeds of up to 50mph into the dark forest! There will be plenty of surprises and challenging obstacles along the way including a frightening drop into an endless pit of Devil’s Snare.

Check out the video below for a sneak peek:

The new Harry Potter ride is set to be Universal’s most highly themed coaster experience ever. Are you excited? We are!

Want to be one of the first to ride the new Harry Potter coaster? Click here, to view our great value Universal Orlando Resort tickets.