Discover immersive thrills and unforgettable experiences at Universal Orlando Resort.
Discover Universal Orlando’s Top-10 rollercoasters and rides including Harry Potter and the Forbidden Journey, Revenge of the Mummy and more.

While some people visit Universal Orlando Resort  to explore all-things Harry Potter or to simply immerse themselves in the atmosphere most guests are there for one main reason… the rides.

With a smorgasbord of adrenaline-pumping roller coasters, mind-blowing immersive experiences and everything in between, thrill-seekers will be in their element.

However, what are the must-do blockbuster rides that you absolutely have to tick off? Here is our definitive guide to the TOP TEN most thrilling rides at Universal Studios.

*Please note that the rides are ranked based on their overall thrill factor from tamest to scariest.

10: The Amazing Adventures of Spider-Man

It may be over 20 years old but don’t let that put you off as, like a fine cobweb in the corner of your shed, the hugely influential Amazing Adventures of Spider Man ride isn’t going anywhere. 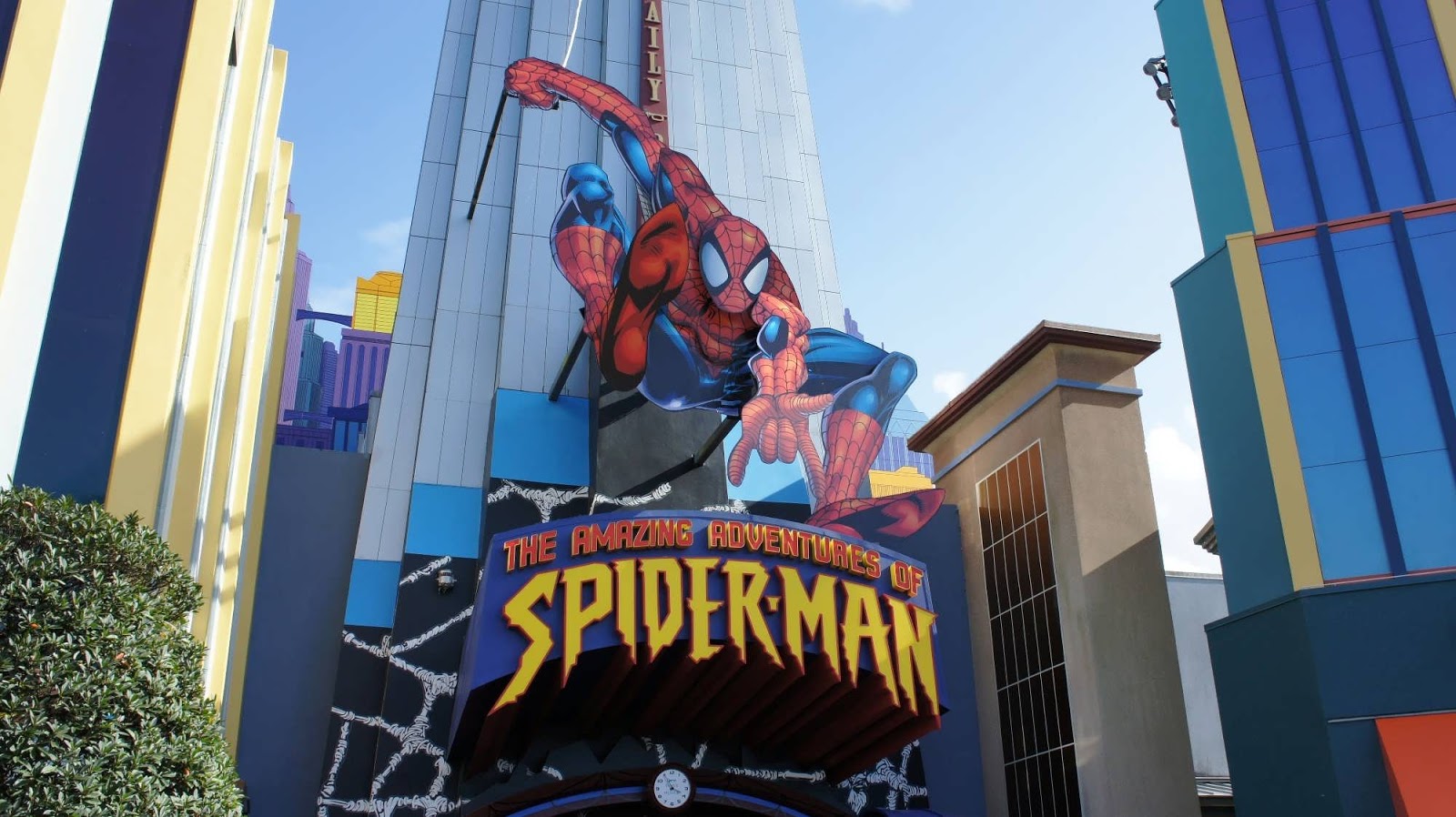 With a great storyline and queue, the build-up segues perfectly into an immersive 3D film experience featuring simulated motion, real-life effects and pyrotechnics culminating in being dropped from 400-foot over New York City!

Why it’s not for the faint-hearted: There’s nothing to overly worry about, although it can be fairly bumpy in parts.

Fun Fact: See if you can spot Spider Man co-creator Stan Lee who makes numerous appearances throughout the ride.

A gentle voyage through a picturesque jungle may sound like a pleasant break from the theme park hustle and bustle but hang on, why do those guys look like they’ve emerged from the 12-Year Storm? 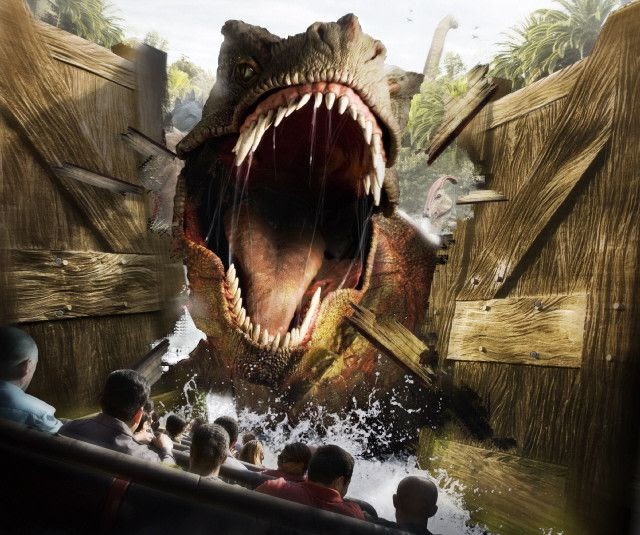 Just like the film franchise, expect big trouble (AKA to get VERY wet) on this classic river rafting ride through the famous dinosaur park. And before you ask – yes, the T-Rex has escaped again! I wonder if you’ll run into the big fella?

Why it’s not for the faint-hearted: An 85-foot drop in the dark.

Fun Fact: 1.5million gallons of water is used in the ride which is enough to fill around 37,500 bathtubs.

A thrilling immersion experience is in store for Optimus Prime devotees as you’re thrown into the midst of a battle between the Autobots and Decepticons. 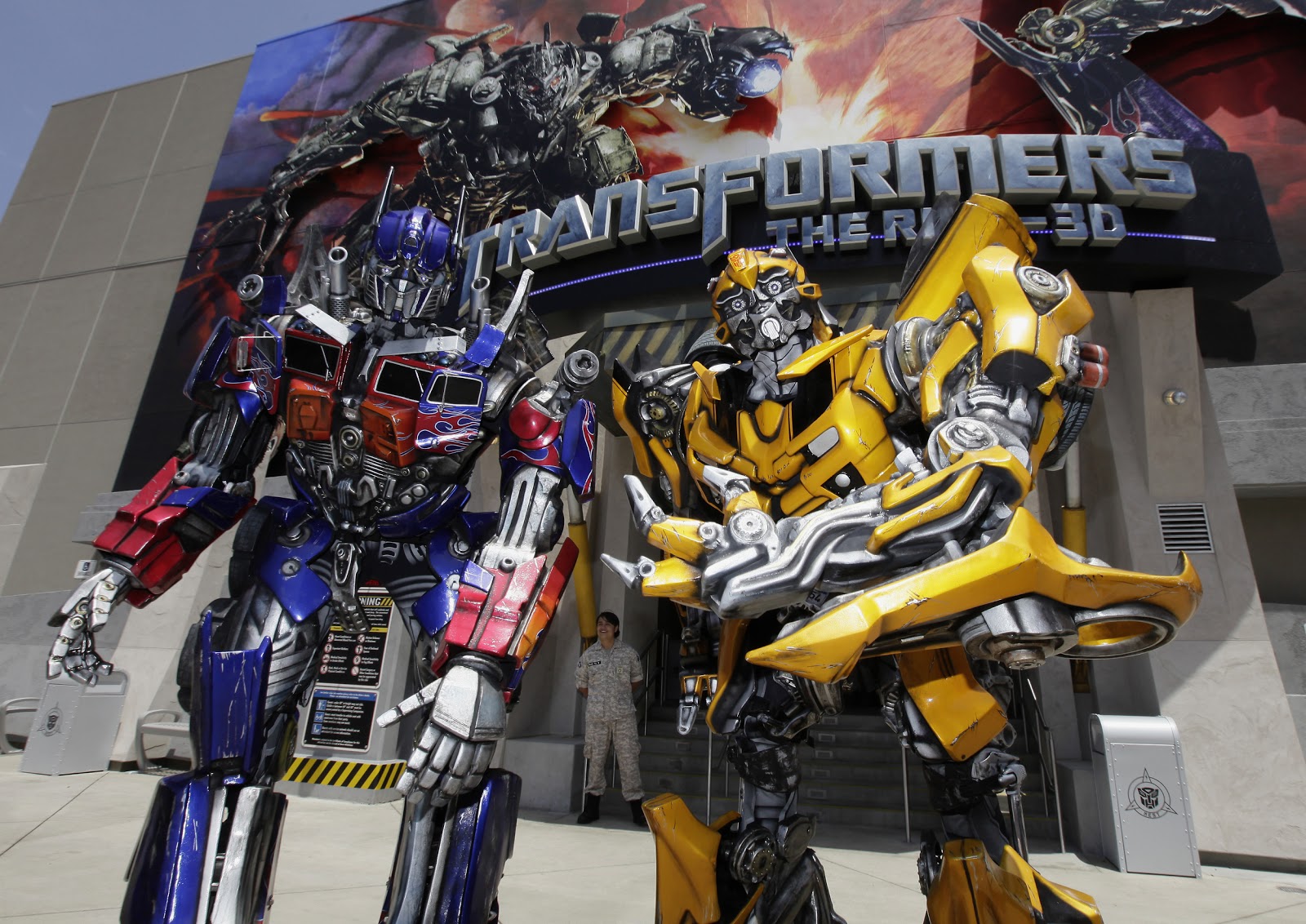 Throughout the ride, as well as the motion of the vehicle, guests will feel wind, water, hot air, fog, air blasts, vibration, and smoke!

Why it’s not for the faint-hearted: While there’s no actual high-speed movement some of the battle sequences can be intense.

Fun Fact: During the ride, your vehicle takes an elevator to the building’s second-floor however the ascent is almost impossible to detect for passengers.

7: Harry Potter and the Escape from Gringotts

Harry Potter fans and ‘Muggles’ alike will enjoy this engrossing hybrid of a dark ride, rollercoaster and 4D simulator. 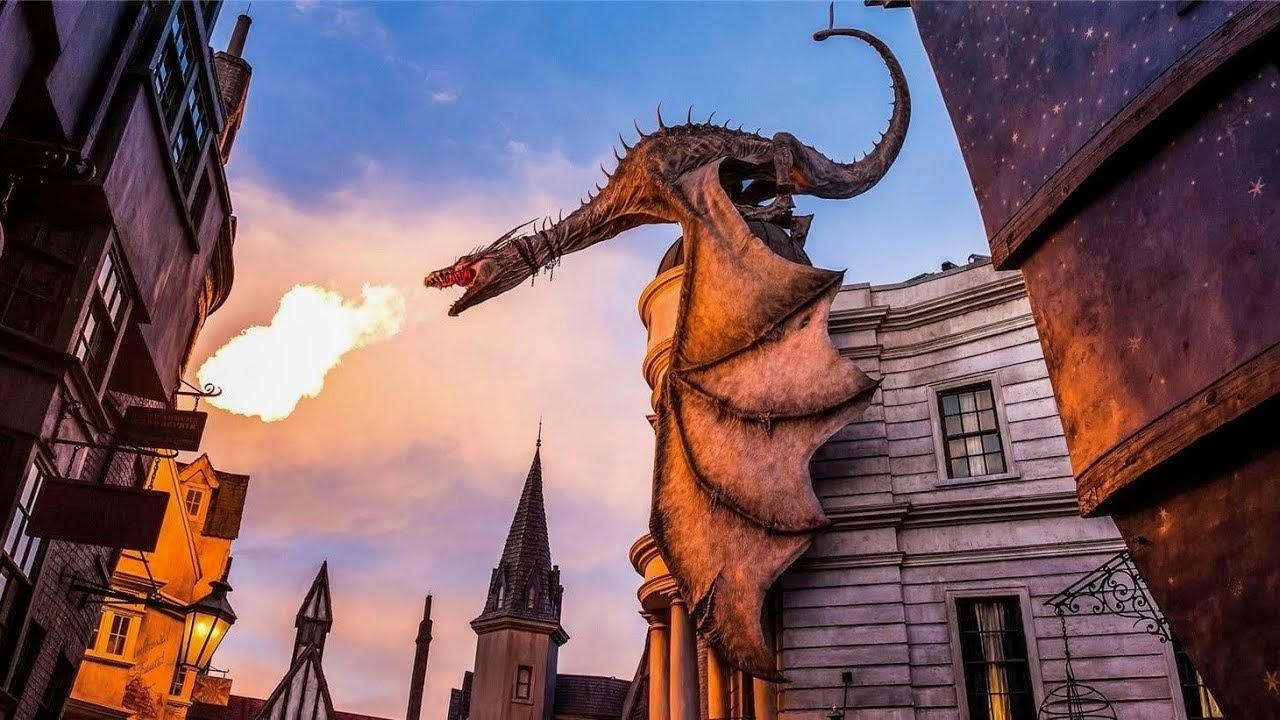 After soaking up the meticulously detailed queue that snakes through Gringotts Bank, descend into the caverns below and get ready for an immersive experience with plenty of twists and surprises.

Why it’s not for the faint-hearted: The ride isn’t overly intense but there are drops and tilts often in the dark.

Fun Fact: When Diagon Alley first opened, the queue for Harry Potter and the Escape from Gringotts exceeded seven hours.

6. Harry Potter and the Forbidden Journey

Anyone for quidditch? The Wizarding World of Harry Potter’s flagship ride opened in 2010 and its ground-breaking innovation and theming remain undiminished.

After absorbing the exquisite details of the queue, a motion-based, dark ride (it’s inside) takes you on a wild journey through Hogwarts Castle and beyond. 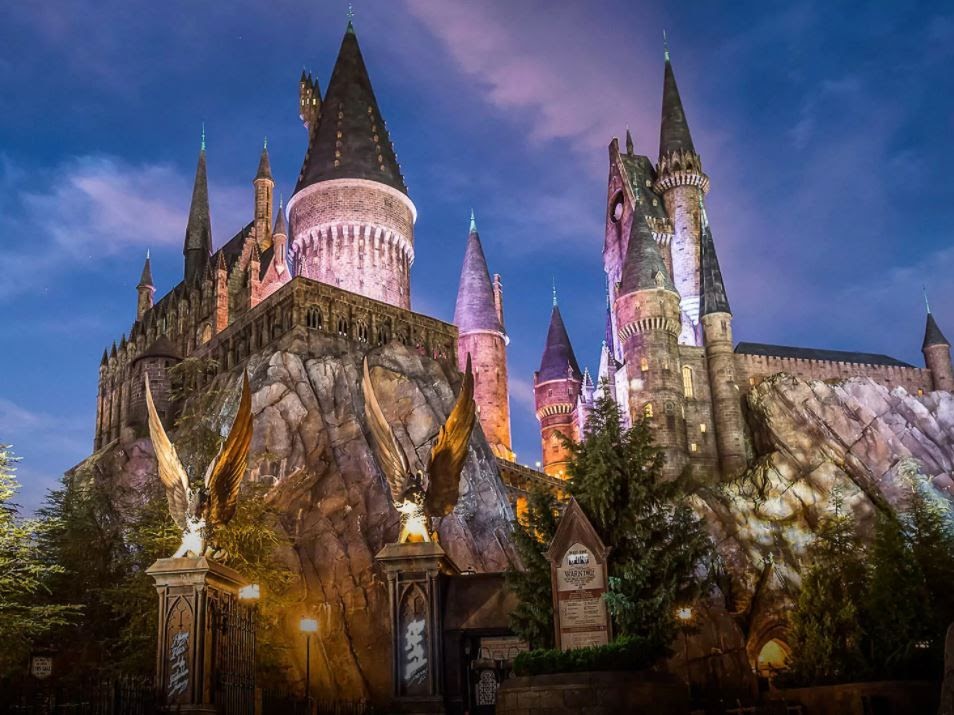 With a mix of filmed sequences, actual sets and a vehicle seemingly capable of moving in any direction, it is easy to forget that you aren’t actually flying!

Located: The Wizarding World of Harry Potter, Islands of Adventure

Why it’s not for the faint-hearted: Arachnophobia anyone? And there is a lot of motion.

Fun Fact: While in the queue, stand near the door marked "Potions Classroom" and you'll hear a professor teaching Neville Longbottom how to cast a spell.

In ‘real-life’ you’d probably think twice before making an appointment with a doctor whose surname was ‘Doom’ and if heights aren’t your thing then perhaps think twice about this ride too. 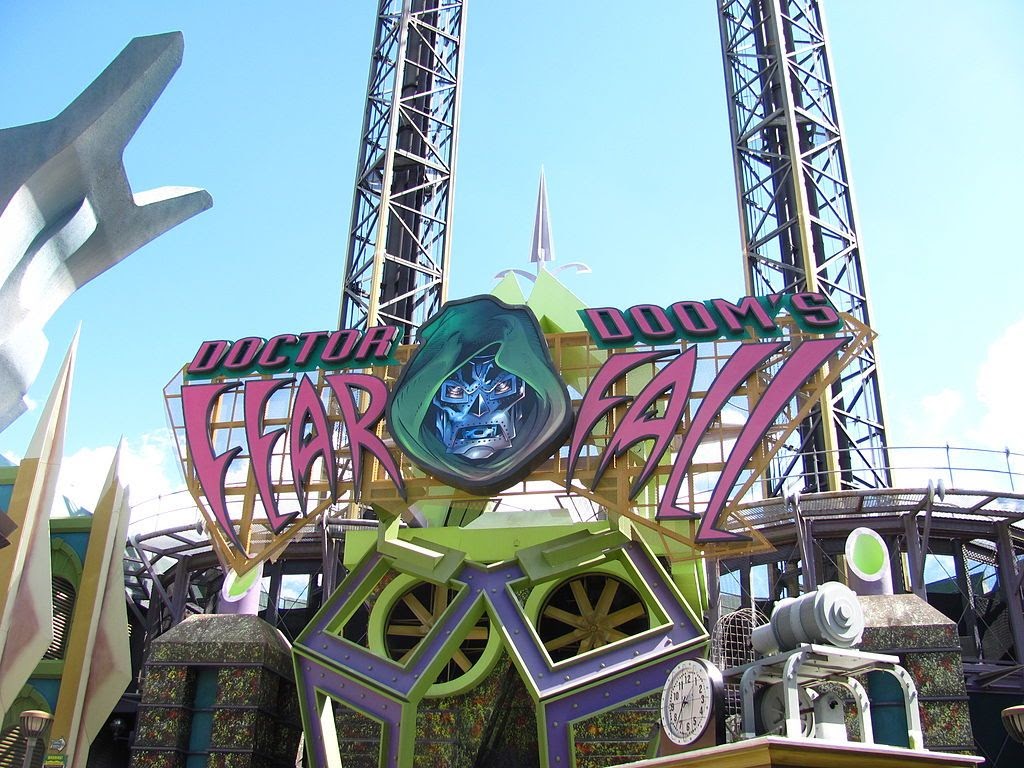 After taking your seat, the experience’s pre-show deliberately keeps you waiting (just like visiting a real doctor) until… arrrrggghhh! You are fired 185-feet into the Floridian sky!

And remember, what goes up…

Why it’s not for the faint-hearted: The nerve-wracking pre-launch and staggering heights.

Fun Fact: The pre-launch countdown is never the same length adding to the fear factor at the start of the ride. 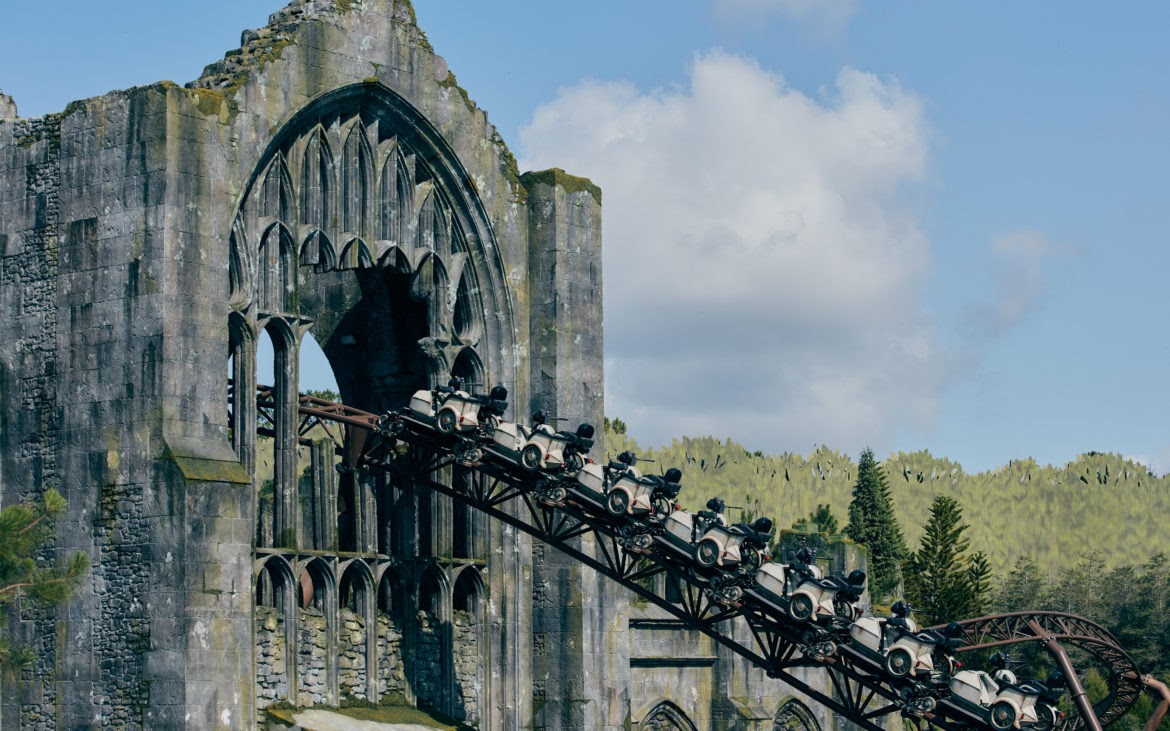 As well as featuring a record-breaking SEVEN separate launches (basically an accelerated start from a standstill) it also goes backwards in parts.

Oh, and there’s also a freefall vertical drop of 17 feet.

Why it’s not for the faint-hearted: It goes backwards, has seven launches and freefall drop. Apart from that…

Fun Fact: With a total track distance of just over a mile, it’s the longest rollercoaster in Florida.

3: Revenge of the Mummy

Combining a haunted house, a 3D immersive dark ride and a rollercoaster, get ready for genuine scares on the spine-tingling Revenge of the Mummy.

Themed as a backstage look at a sequel to The Mummy film, the meticulously designed queue and pre-show help to build a palpable sense of excitement.

While the ride, using technology, animatronics, lighting, and even fire-spewing gas vents, pushes numerous phobias to the limit!

Why it’s not for the faint-hearted: Two words… Scarab Beetles.

Fun Fact: Revenge of the Mummy replaced one of the original Universal Studio attractions ‘Kongfrontation’ and there are several homages to the giant gorilla throughout the ride.

Looking for one of Universal’s biggest rides? Look no further.

After selecting your personal soundtrack for the ride - disappointingly I mistakenly (honest!) ended up with Limp Bizkit - sit back and ‘enjoy’ the completely VERTICAL 17-story climb.

At the top, wave to your friends/family/those specks on the ground before blast off! 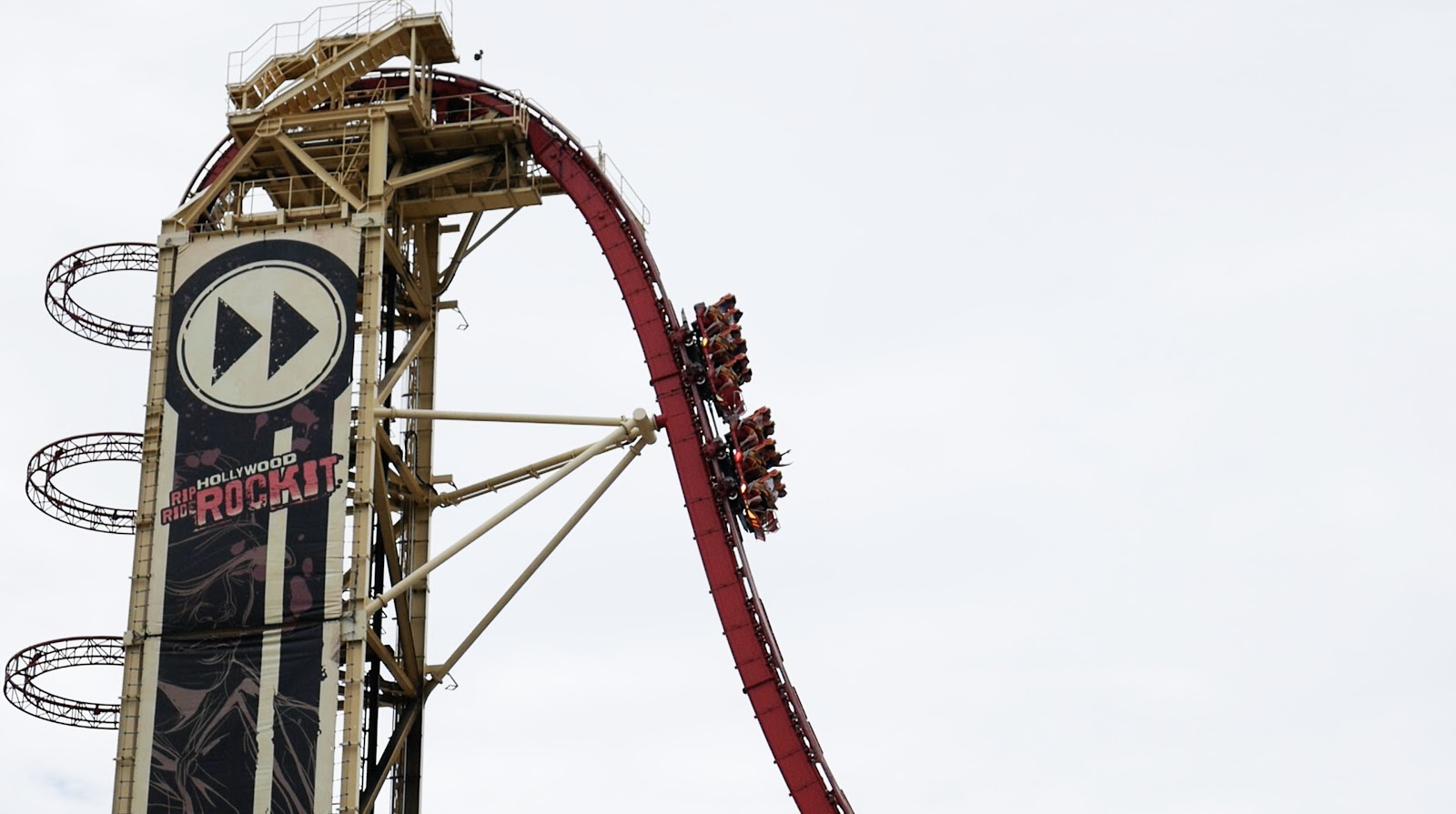 Travelling at speeds of 65 miles per hour, you will experience six near-miss encounters while powering through numerous loops, turns and twists.

Why it’s not for the faint-hearted: Err, a 167-foot vertical lift anyone?

Fun Fact: While there are 30 official ride-accompaniment songs to choose from, legend says a secret list of songs can be accessed by holding down the ride logo on the touch screen.

Looking afar like an upturned bowl of green spaghetti, the Incredible Hulk Coaster dominates the Universal Studios skyline and is widely regarded as one of the best rollercoasters in Orlando.

Hold on tight as the launch fires riders from 0-40 miles per hour in just two seconds before propelling you through seven inversions including a ‘Zero-G Roll’ (yes, I had to look it up too) 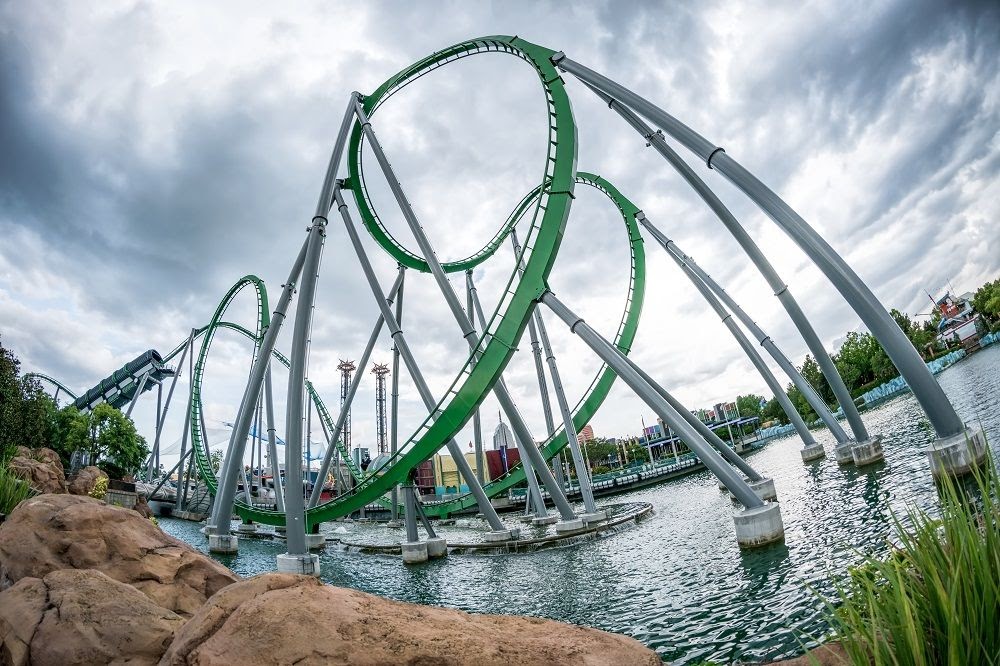 Reaching speeds close to 70 miles per hour it would be no surprise if, like the Hulkster himself, you’re feeling a little green around the gills at the end of this ride.

Why it’s not for the faint-hearted: Perhaps the most intense beginning to any rollercoaster in Florida.

Fun Fact: The giant Incredible Hulk figure stood at the entrance is holding a piece of the ride’s original incarnation (it was refurbed in 2016).

Ready to take on the thrills? Browse our Universal Orlando attraction tickets now!