If you’ve never been on the Warner Bros Studio Tour- The Making of Harry Potter (where have you been?!) this incredible experience lets you explore the studios and the real sets that were used to film all 8 of the famous Harry Potter movies. You can walk through the Great Hall, explore Dumbledore’s Office, see the Weasley’s magical home, brave the Forbidden Forest and much more. Plus, you can now discover a brand NEW expansion on the Warner Bros Studio Tour- Gringotts Bank!

For the first time ever at Warner Bros Studio Tour- The Making of Harry Potter, guests can visit the set of the famous Wizarding bank, Gringotts. This is the studios biggest expansion to date, and it was unveiled to the public on 6th April 2019. So, if you want to see it for yourself, you can book your Warner Bros. Studio Tour tickets now.

Harry Potter fans will remember the iconic scene where Harry, Ron and Hermione break into Gringotts and escape on the back of a fire-breathing Ukrainian Ironbelly dragon. Well, now you’ll be able to go behind the scenes and discover how these moments were created and find out some of the secrets of Gringotts Bank for yourself. You’ll be able to walk through the impressive bank, sneak into the Lestrange vault and get a close up look at the Gringotts goblins!

Your journey will start when you enter the grand banking hall which will be decorated with three huge chandeliers- just like in the movie. Look around and you’ll see towering marble pillars, inkwells, quills and stacks of wizarding money on the desks. Did you know, that the prop-making department created more than 210,000 coins for the final two films alone? 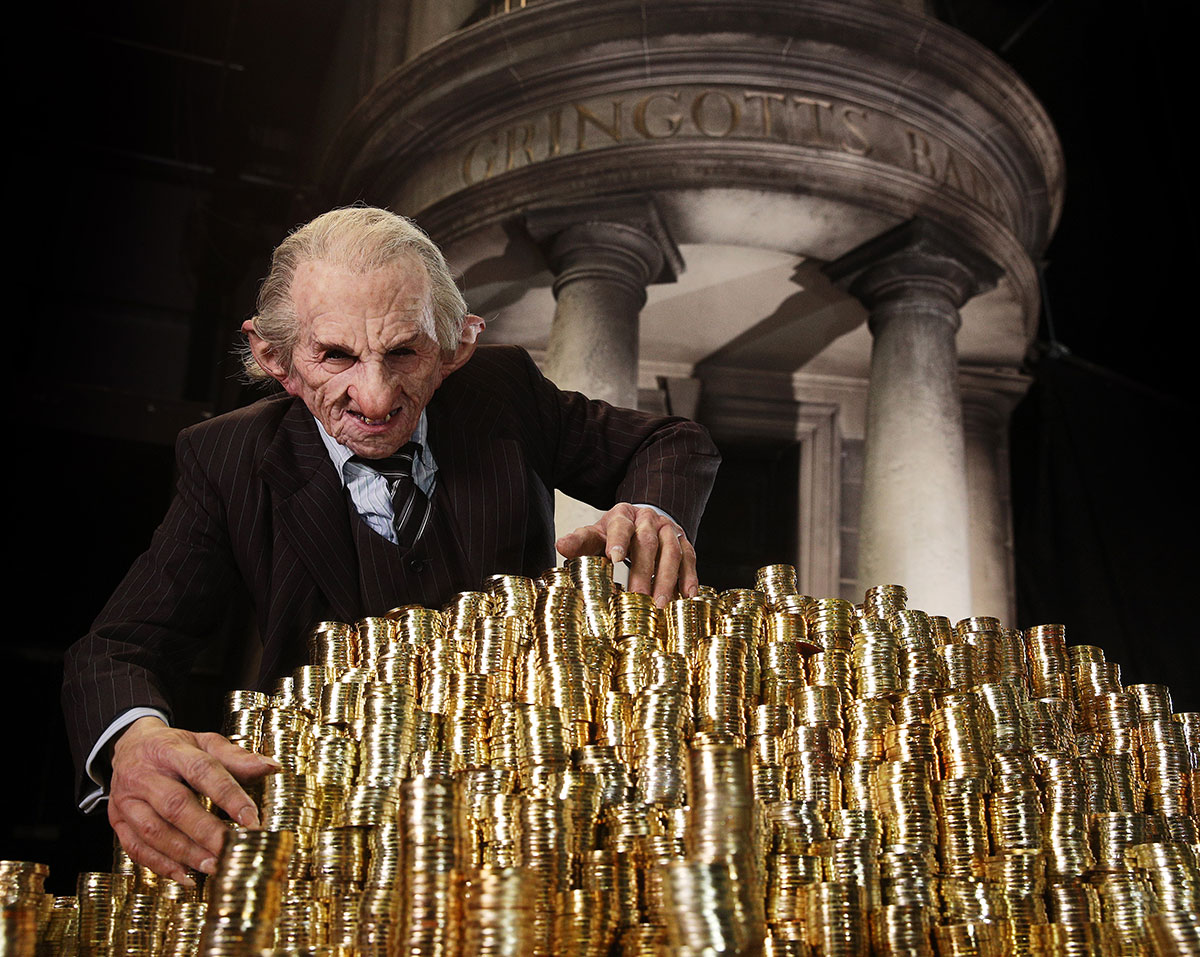 Next, you’ll get a close-up look at the costumes and prosthetics that belonged to goblin bankers like Bogrod and Griphook. You’ll learn how each goblin mask took weeks to create, with each hair having to be inserted individually.

Once you’ve made your way through the banking hall, it’s time to enter the depths of the Lestrange vault. This is the vault that was used by Death Eater Bellatrix Lestrange to conceal a host of dark objects, including Helga Hufflepuff’s cup which was used as one of Lord Voldemort’s horcruxes. Look closely and you might also spot the famous sword of Gryffindor! In the movie, whenever an item in the vault was touched it would multiply, which is why the props department had to create 38,000 pieces of rubberised treasure, including 7,014 Hufflepuff cups! During your visit, you’ll be able to try out a unique photo opportunity inside the vault, where you'll see yourself surrounded by treasure.

This amazing Gringotts expansion is the biggest addition to the Warner Bros Studio Tour since it opened, stretching over 16,500sqft. As you explore Gringotts for yourself, you’ll feel as though you’ve stepped through the screen straight into the movie. This authentic recreation has been overseen by several original crew members that worked on the Harry Potter movies. Production Designer Stuart Craig, Construction Manager Paul Hayes and Head Propmaker Pierre Bohanna have all been involved with the design and creation of this new expansion, to make it appear as true to the movies as possible.

This is the place where the cast and crew filmed the epic scenes you’ve seen on screen and was also the place they called home for more than 10 years, which means everything you see here is real. So, if you’re a big Harry Potter fan, you really must pay a visit.

Want to visit Gringotts bank? Click here, to get your tickets for Warner Bros Studio Tour- The Making of Harry Potter. You don't need to worry about transport either as it's included with your ticket!