5 Reasons Why The Purge Movie Concept Makes for the MOST HORRIFIC of Halloween Horror Nights Houses!

Firstly and foremostly, we have to say, if you're yet to watch The Purge or its sequel The Purge: Anarchy and you're thinking of tackling this house at Universal's Halloween Horror Nights, then you must do so  in preparation for the Purging scareactors at Universal's harrowing Halloween fest. You see, the Purgers (read scareactors)  might not be as recognisable as the typical and usual fiends you might be on the look out for - to gather your wits about you or to go run and hide on sight, depending on the type of Halloween Horror Nights goer you might be.
Purgers won't look like  the fang teethed  Vampires from HHN's Dusk Till Dawn house, hungry for their next blood feed. Purgers  won't appear zombie or ghostlike, in between the realm of the dead and the living, waiting to complete their unfinished business, like scareactors from The Walking Dead haunted house. In fact, they won't even resemble the imaginitive demonic creatures and characters created by make up artists from the Halloween Horror Nights' Face Off house. Indeed, this his is where the brilliance lies and, indeed, this is why The Purge at Halloween Horror Nights is sheer genius.
1. Purgers are just like us!

In fact, those of you that have seen The Purge/Anarchy will know that purgers are very similar to ourselves - in fact they are of our very same kind. Purgers are angered human beings. Humans with a grudge, humans that have been ordered to unleash any negative feelings they have been harbouring,  any violence they have a desire to cause  or any crime in which they wish to commit. Why?
2. All crime is legal.

Yes, in The Purge films crime is made legal in the United States of America for a whole twelve hours! Of course, Universal's Halloween Horror Nights runs for twenty eight days, so Purgers will be causing anarchy for a deadly three hundred and thirty six hours.  Universal wouldn't want you to miss out on this 'cleansing' experience.
3. There Will Be Nobody To Rescue You

No emergency services will be available to prevent any criminal activity or to rescue you should you be the victim of a purge. This famous quote from the film pretty much says it all:

"This is not a test. This is your emergency broadcast system announcing the commencement of the Annual Purge sanctioned by the U.S. Government. Weapons of class 4 and lower have been authorized for use during the Purge. All other weapons are restricted. Government officials of ranking 10 have been granted immunity from the Purge and shall not be harmed. Commencing at the siren, any and all crime, including murder, will be legal for 12 continuous hours. Police, fire, and emergency medical services will be unavailable until tomorrow morning until 7 a.m., when The Purge concludes."

- Emergency broadcast system announcing the commencement of The Purge
Are you starting to see the brilliance (and the horror) now?
4. Everybody Has the Right to Purge 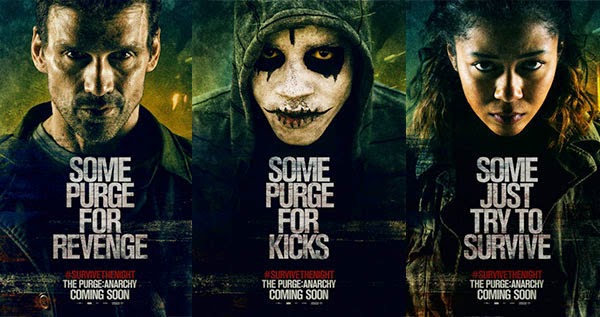 Not only does everybody have the right to purge, it is encouraged. So much so, that '... your government thanks you for your participation' in this 'Annual Purge, sanctioned by the US Government.'  This means, you are at the mercy of any and everyone, in the film, this not only includes repressed criminals, but your friends and neigbours too. Keep an eye out for friendly strangers  posing as your friends.
5. Some Purgers Wear Masks - Some Don't!

Considering all crime is legal and encouraged - there's no real reason for  purgers to mask their identity, other than to instill even more fear into their victims and of course,  the movie's audience too.  These masks are beyond horrific - they are freakish and haunting, but at Halloween Horror Nights, wouldn't you prefer to identify purgers than not? It's your friends, your neighbours, those that don't feel they need to conceal their identity from you that you need to fear the most!

The Purge is so successful in its genre because it forces its viewers to imagine a world where this horrific  annual event realises itself into actuality. Theme parks are usually all about making your dreams come true, but at Halloween Horror Nights, it's all about your nightmares!