Expert View Column
By ATD’s Florida experts Susan & Simon Veness
Disney promised us “the largest, most innovative expansion we have ever built” when they announced the creation of Star Wars: Galaxy’s Edge four years ago. And they weren’t exaggerating. In fact, the reality is, they might just have underestimated their own ability.

We were among the crowds who thronged into the Disneyland park in Anaheim in the first few days, and we are here to tell you, firmly and unequivocally – this is the most startling and immersive land in the company’s history.

Just to start with, the setting of Galaxy’s Edge in Walt’s original park is quite delicious, right at the very rear of all the existing lands, so the sense of anticipation rises as you go deeper into either Frontierland or Critter Country.

If you enter via the former, the gateway is sudden and dramatic. If you take the entryway through the latter, the impact is slower but more revealing.

But, either way, you will be surrounded by the sights and sounds of the planet Batuu, on the outer rim of a galaxy far, far away, and the effect is utterly, resoundingly mesmerising. 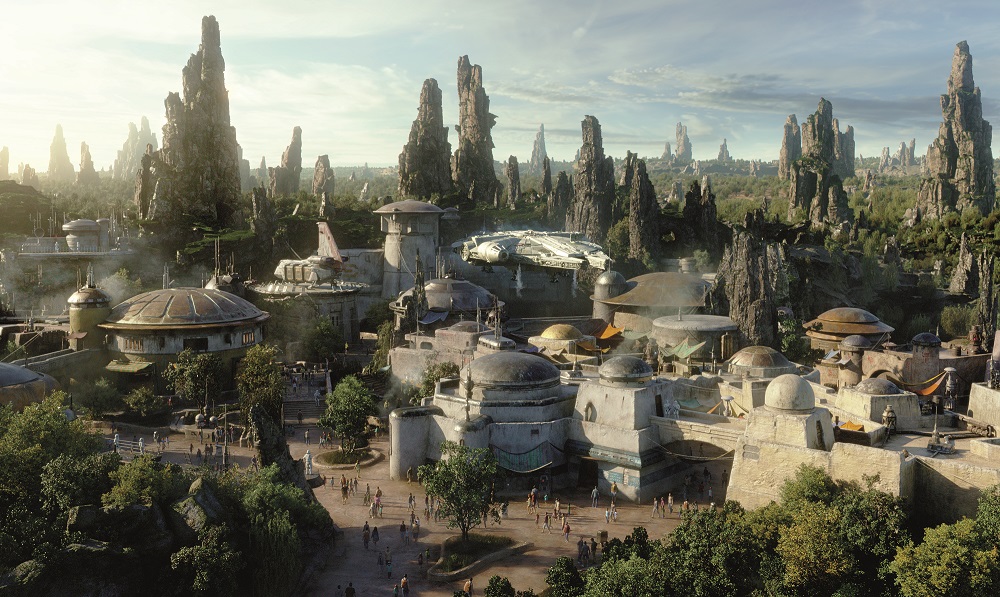 The elegance of the architecture is profound; the realism of the alien landscape is equally compelling; and the overall sense of being dropped slap, bang into the middle of the greatest film franchise in movie history is practically overwhelming.

Nothing that you’ve seen or heard fully prepares you for the immensity of Black Spire Outpost, the ‘town’ that sits at the heart of Galaxy’s Edge. It wraps you completely in the most comprehensive story-telling in the vast Disney theme park empire, and it reveals jaw-dropping scene after jaw-dropping scene as you meander further into the arcane and alien vistas all around you.

Finally, as you round a corner, there is a sight to stop you dead in your tracks. Or, at least, it did for both of us.

Now, we’re not Star Wars nerds to the extent we can name every character in every film and recant every scene in graphic detail. We love the original trio, and have thoroughly enjoyed the recent, updated movies that have breathed new life into Luke Skywalker and Co, but we wouldn’t class ourselves as die-hard fans, ready to be bowled over by the first mention of The Force.

But we were totally awe-struck as we took in the life-size scene of Hollywood’s most famous spaceship, just sitting in its docking bay at the centre of this rustic, roguish space port. Susan was positively misty-eyed, overpowered by the sense of realism; Simon was equally spellbound, almost stunned by the physical presence that is the Millennium Falcon. And then you get to pilot it! OK, two of you get to pilot it, while two more act as gunners and another pair are the ship’s engineers for a rollicking, riveting, rambunctious ride through a whole new episode of Star Wars history, helping The Resistance fly the Millenium Falcon on a thrilling interactive smuggling mission.

But even that is only a taste of what’s in store for Galaxy’s Edge visitors. There are another seven full, set-piece scenes of immense immersion to encounter, from Droid Depot – the chance to build your own BB8 or R2 unit from a dazzling array of options in a setting that can only be described as astonishing – to Oga’s Cantina, inspired by that inimitable cantina scene in Mos Eisley from the very first movie.

The Milk Stand is an opportunity to sample those iconic blue and green milk beverages (Susan likes the ‘flowery’ green, by the way; Simon prefers the fruity tones of the blue), surrounded by more evidence of other-worldly culture and civilisation, while Savi’s Workshop offers an enthralling lesson in animatronic genius, with yet another piece of dramatic characterisation.

Enter the hard-edged confines of Docking Bay 7 Food & Cargo and you will be surrounded by new horizons in spaceport practicality, while also being offered “grub from around the galaxy,” which includes standard dishes like ribs and chicken cunningly disguised as unfathomable alien fare.

Ronto Roasters provides a realistic post-industrial setting for another counter-service dining option, taking the humble Sausage Wrap and enveloping it in a breathtaking package of visual splendour that offers another piece of the Galaxy’s Edge story as stormtroopers stalk the shadows and agents of The Resistance flit to and fro with furtive missions.

More layers of artistic engagement are created by the various sounds and noises that come at you from odd angles and unexpected places, from spaceships suddenly lifting off, unseen, in the background, to the chirps of droids speaking their own machine language.

It all comes with the additional drama of Star Wars characters roaming the land for chance encounters and set-piece challenges that even draw guests into the random action. You might bump into Rey or Resistance spy Vi Moradi; get locked in the welcoming embrace of a Wookie (yes, that would be Chewbacca!); or have to engage the forbidding gaze of Kylo Ren.

And it is that final level of interaction that gives Galaxy’s Edge its awesome, magnetic charm, a truly thrilling and absorbing experience unlike anything in the theme park world to date. Yes, it is going to be popular and crowded for the foreseeable future, but not uncomfortably so, if Disneyland is anything to go by, and not without plenty of places to sit back, regain your breath and simply marvel at the visual creativity in front of you.

We will have more to say – much more! – about this wondrous creation in the weeks and months to come, but suffice it to say, it is going to be a massive, triumphant moment in the great Disney pantheon of theme park achievement.

And, just in case you can’t make it all the way over to California, the whole, exact creation is opening in Walt Disney World on August 29. Twice as nice, or double the fun? You take your pick!

Got questions about Star Wars: Galaxy’s Edge? Come on over to the fab ATD Forums and join in the fun banter and discussion.