Dubai , Burj Khalifa , Sightseeing , Burj Al Arab , Top Tens , Travel
The sky is the only limit for Dubai...
iPads that cost more than small cars, seven star hotels, skyscrapers that are nearly a mile high and police cars that resemble the Batmobile may all sound a little extravagant! But when money is no object, there truly is no need for limits and Dubai is most certainly a destination setting the pace for limitless living. If you want to see extravagance at its finest, keep reading...

1. The Biggest Mall in the World

Dubai is home to the biggest mall in the world, the Dubai Mall. This impressive shopping and entertainment hub makes home to more than 1,200 retail stores. Not only does the Dubai Mall hold the record for being the world's largest mall, but the most visited mall on the planet! So well frequented is the Dubai Mall, that in a year it can receive more visitors than New York City!

2. One of the World's Largest Aquarium Viewing Panels

Of course the Dubai Mall wouldn't quite justify its 'Dubai' title without an Aquarium, let's say. Or an underwater zoo. Or an olympic sized ice skating rink. Yes, you'll find each of these at the Dubai Mall. And of course there's a record breaker in there too ... at 107ft wide and 26ft tall, the Dubai Aquarium has one of the world's largest acryllic viewing panels.

Believe your eyes! There's a Lamborghini in that fleet! 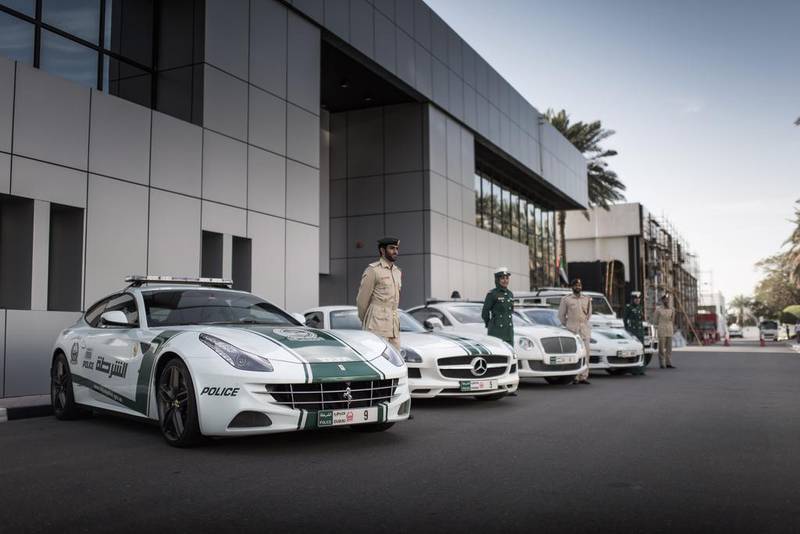 Not even the sky is the limit for those designing and constructing in Dubai. The Burj Khalifa is the world's tallest man-made structure, standing proudly at an astounding 829.8 metres into the sky. That's a half a mile in distance, from the gleaming tower's base to the tip of its spire.

7. The Burj Khalifa Breaks a Record Breaking Number of Records

Indeed, the Dubai Miracle Garden is miraculous. This garden makes home to 45 million different types of flowers set in a modest 72,000 square metre complex. The garden boasts flowers in a spectacular array of colourful displays, including artistic topiaries taking the shape of pyramids, igloos, hearts and stars. The flower displays are redesigned regularly to make sure guests don't tire from seeing the same flower displays. Epcot International Flower and Garden Festival regular attendees, Dubai's Miracle Garden is right up your street.

For those that might have grown tired of the standard 5 star hotel rating, there is always the option to go two stars better and accommodate oneself at the Burj Al Arab. This beautiful hotel, that resembles the billowing sail of a ship out at see, is often referred to as 'the world's only 7 star hotel'! Of course, there's no official 7 star rating, but the service of the Burj Al Arab is out of this world and its star rating must reflect this.

What makes it 7 star exactly?

Maybe it's the fact that it's the third largest hotel in the world, standing 320 metres tall on its very own private island.

10. An Island Constucted Just for a Hotel

If it's not the private island, maybe it's the hotel's private helipad that resides 210 metres above ground...

11. A Fleet of Rolls Royce for Hotel Guests

...Or maybe it's the Burj Al Arab's fleet of Rolls Royce that will escort guests to and from the hotel and take them on any Dubai sightseeing trips they might wish to do during their stay. 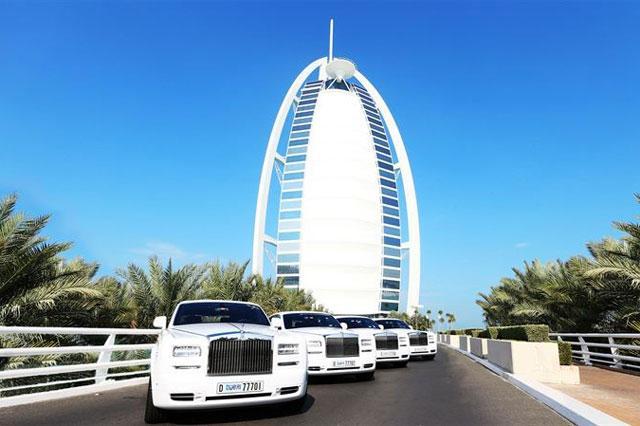 ...Maybe it's the 24 carat gold iPad, designed especially for the Burj Al Arab, that is given to guests during their stay to act as their personal 'virtual concierge'. This golden piece of technology is worth a mere £6,715!

13. Hotel Suites Fit for a King

...Or could it be that Burj Khalifa gets it 7 stars from its hotel suites, that look something similar to a small palace? 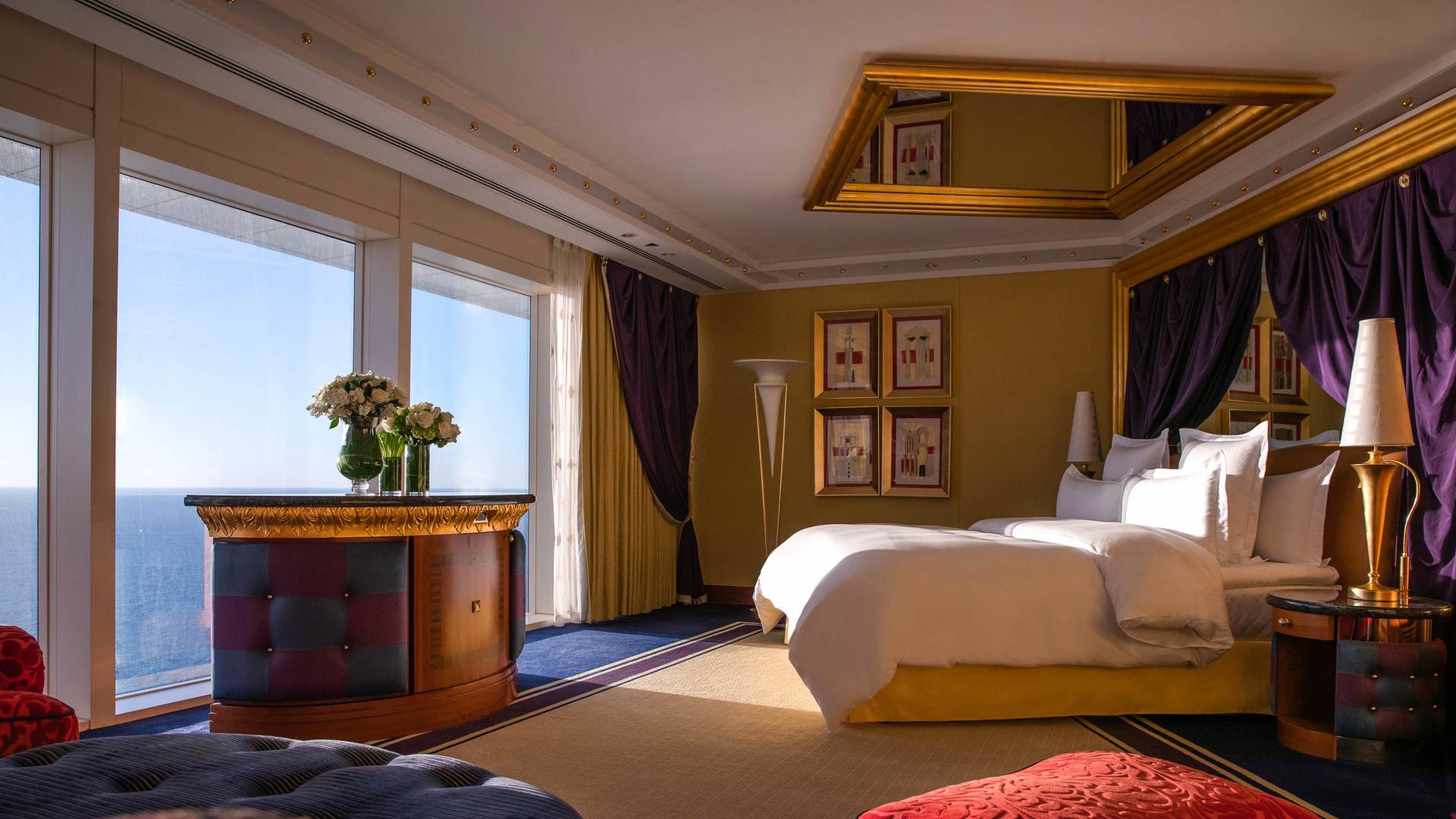 When you need a chocolate to go, there's a vending machine for that. For cash, there's a cash machine for that. And should you need some gold to go - it's no different. THERE'S A MACHINE FOR THAT TOO! Gold to Go is the first ever vending machine to dispense pure gold. Bling lovers can choose from 320 items to withdraw from the Gold to Go machine, each item made of 24 carat gold. You'll find these golden treasures in the Burj Khalifa and the Dubai Mall. We say forget the mall's 1,200 retail shops - go and invest in some gold! 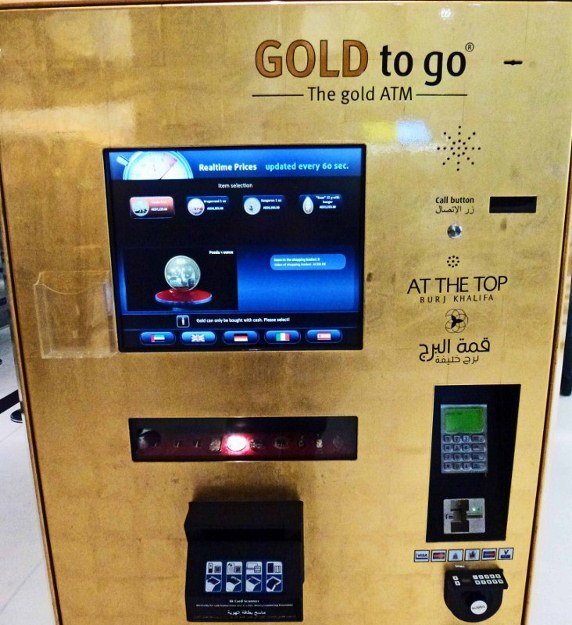 So, when we say there is no limit to Dubai's development, no luxury beyond it's reach, we mean it!

Go and see this golden gleaming destination for yourself. With Attraction Tickets Direct, you can enjoy High Tea at the luxurious Burj Al Arab and witness views like you will see nowhere else on the planet from the observation deck on the 124th floor of the world's tallest building, the Burj Khalifa, with our amazing Top of the World Dubai attraction tickets.