Michael Jackson ONE by Cirque du Soleil , Las Vegas , Fun , Las Vegas , Las Vegas Shows , Las Vegas Cirque du Soleil , Top Tens , Travel , Destinations , Best Of Travel , Eating and Drinking , Shortlists
Check out the 9 Vegas attractions and experiences we've rewarded 'The Best' and 'The Most Outrageous'!
In the midst of the award season, we thought we'd take the time to show some love to one of our favourite US destinations, Las Vegas. So it's not technically a theme park, but with its otherworldliness, we like to think of it as the Walt Disney World of the desert (for adults, of course). Vegas is a thrilling spectacle just waiting dazzle you and remove you as far from reality as the Happiest Place on Earth...

Of course, the best musical act to come out of Las Vegas was the one and only Liberace. However, we have to argue that the best and most relevant musical act to land a Vegas contract is Miss Britney Spears. The Princess of Pop arrived at Planet Hollywood Las Vegas in 2013 and had an opening night that blew the roof off!  Britney continues to fill the house at Planet Hollywood, so if your headed to Vegas, get some Britney Vegas tickets! The crowd is electric and really, where better to watch this iconic pop star perform?

We're pretty sure that nowhere else in the world could even get away with the name, let alone the actual 'hospital' dining concept! If you haven't heard about the Heart Attack Grill it's probably for the best, to be honest. However, it's an American grill restaurant that suggests their menu items could well and truly be heart attack inducing. Items include the Quadruple Bypass Burger, the diners are patients, the waitresses dress are nurses and customers weighing more than 350 lb eat for free. Yes, they will weigh you to make sure! Ironically, instead of being completely and utterly repulsed by the restaurant, most are intrigued by the restaurant. This award goes to the Rio All Suite Hotel and Casino's Voodoo Nightclub, located 50 stories above ground level. Admittedly, no matter where in the world you are, a roof top bar always feels pretty special. However, although skybars may be common in Las Vegas, actual roof top bars aren't so much, so Voodoo is indeed a Las Vegas jewel. Even the elevator ride at this Vegas nightclub is spectacular, taking guests to the 51st floor in an all glass elevator at the side of the hotel building. As you ascend, you'll be able to witness the bright lights of the fabulous Las Vegas disappear beneath you. And once you arrive at Voodoo, you'll party outside underneath the stars, with Las Vegas at your feet.

4. Most Outrageous Activity: Drive Thru Marriage

Even more outrageous than spending thousands of pounds on slot machines or attempting to tackle the Quadruple Bypass Burger at the Heart Attack Grill is getting hitched in Las Vegas! Although not every couple that ties the knot in Vegas will be under the influence of the bright lights and the general buzz of this sin filled city, there have been many extremely short marriages to come out of Vegas and that is because the general marriage scene in Vegas is outrageous. So easy is it to get married in Las Vegas, that you can do it twenty four hours a day and you don't even have to get out of your car to do so. Just head to the Little White Chapel and use the drive-thru lane! Hence why, in addition to being referred to as Sin City, the City of Lights and the City that Never Sleeps, Vegas has acquired the alias as the Marriage Capital of the World!

5. Best Nightclub The Kardashians Have Been in Attendance: TAO

This award is for those that love to party like a  reality star, and the winner goes to TAO Las Vegas at the Venetian. Arguably for some, the Kardashians might be reason enough to put you off making an attendance at TAO, but if you're a truly seasoned raver, this 60,000 square foot nightclub will lure you no matter what! No ordinary nightclub, the Asian inspired venue also boasts a lounge, a restaurant, a pool club and a 40 foot outdoor terrace, so you can party amidst the dazzling lights of the strip. That all comes with a sound and lighting system that is out of this world, private skyboxes and a red carpet that rolls out for the many gliteratti that attend this state of the art nightclub, including the Kardashians.

With so many themed hotels in Las Vegas, this is a tough one to call, but we're going to have to go with the Luxor Las Vegas. We have no doubt you'll be familiar with this hotel's distinctive exterior, even if you have never actually laid eyes on it. The Luxor Las Vegas is, indeed, the unmissable Egyptian themed hotel on the south end of Las Vegas Boulevard, with the commanding Great Sphinx of Giza and looming black Egyptian pyramid. At 350 feet tall, the Luxor, at the time of opening, was the tallest building on the strip. To this day the hotel remains the only pyramid hotel in Vegas and it's base so large it can fit nine jumbo jets.

Ironically, Zumanity might also get the award for the most outrageous show, if we had one. Of course, if you have ever seen a Cirque du Soleil production, you will know that all of their shows are beautifully bizarre and unbelievably outrageous. Circus arts, including acrobatics, dance and contortion at their most refined and extreme forms, combined with physical theatre, humour and music to create the most fantastical and mesmerising of performances. We award Zumanity for Best Show because, even for Cirque du Soleil standards, this particular production is daring. Zumanity explores the love and attraction between humans in a provocative and alluring way, demonstrated in the brilliantly artistic circus form Cirque du Soleil has received it's critical acclaim for.

8. Most Outrageously Bright Light in Vegas: The Luxor's Sky Beam Las Vegas is possibly more famous for its lights than it is its casinos. It is estimated that there are roughly 9,000,000 light tubes in Vegas, totaling "15,000 miles of lighted neon tubing on the strip and downtown" (Lasvegasnevada.gov). However, out of all the dazzling, incandescent, neon LED lights in the City of Lights, there is a singular light that shines brighter than the rest! The Luxor's Sky Beam is not only the brightest and most powerful light in Las Vegas, or even in the United States of America. The Luxor Las Vegas Sky Beam shines brighter than any light in the world! The beam is made up of 39 individual 7000 watt bulbs, creating a glow so strong it is visible from over 250 miles away. 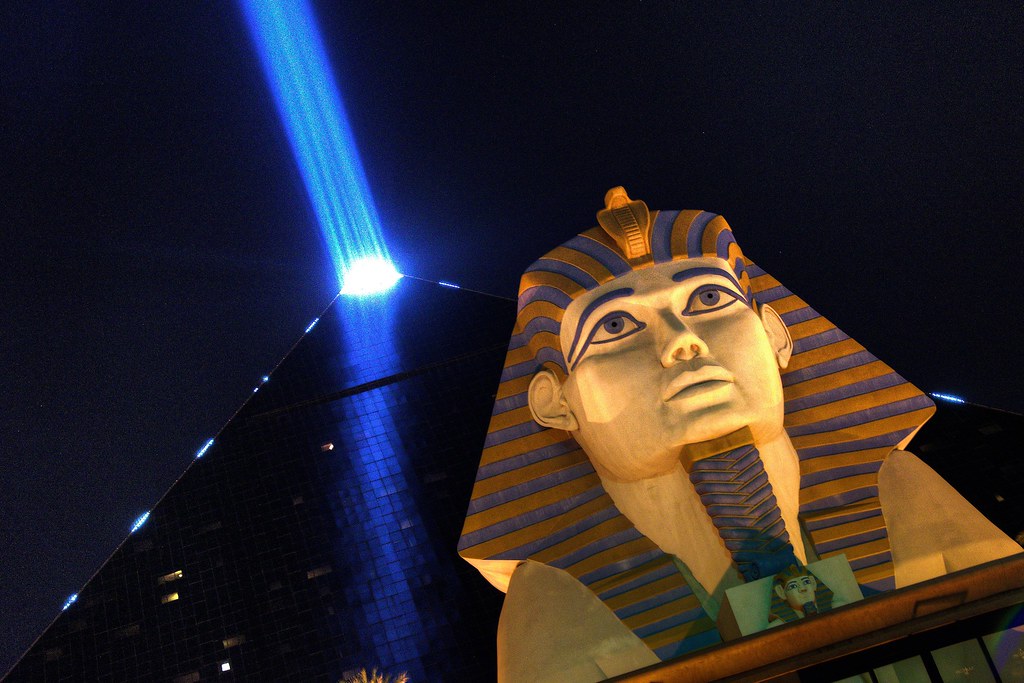 9. Best Selfie Location: In front of the 'Welcome to Fabulous Las Vegas' sign - of course!

Thrill seekers, party animals, escapists and good timers go forth, be fabulous and have the time of your life in one of the most dazzling destinations on the planet.