Delving into the Dark Arts at Universal Orlando

By ATD’s Florida Experts, Susan and Simon Veness
Ready for something Dark at Universal Orlando? Something Dark and brooding? Dark, brooding AND menacing? Well, you’ve come to the right place. There’s a new show at the Islands of Adventure park and it is tailor-made for your darker side this autumn!

With the way the magnificent edifice that is Hogwarts Castle provides the perfect backdrop for a projection mapping show, we were convinced a more edgy approach – the kind Universal has practically patented over the years – would be a fabulous way to use the technology and give it a really intimidating twist.

After all, it is the Halloween season and, while the Universal Studios park goes full throttle for a genuinely scary style at this time of year with its Halloween Horror Nights programme, Islands of Adventure has largely been left out of the Scare Factor potential. 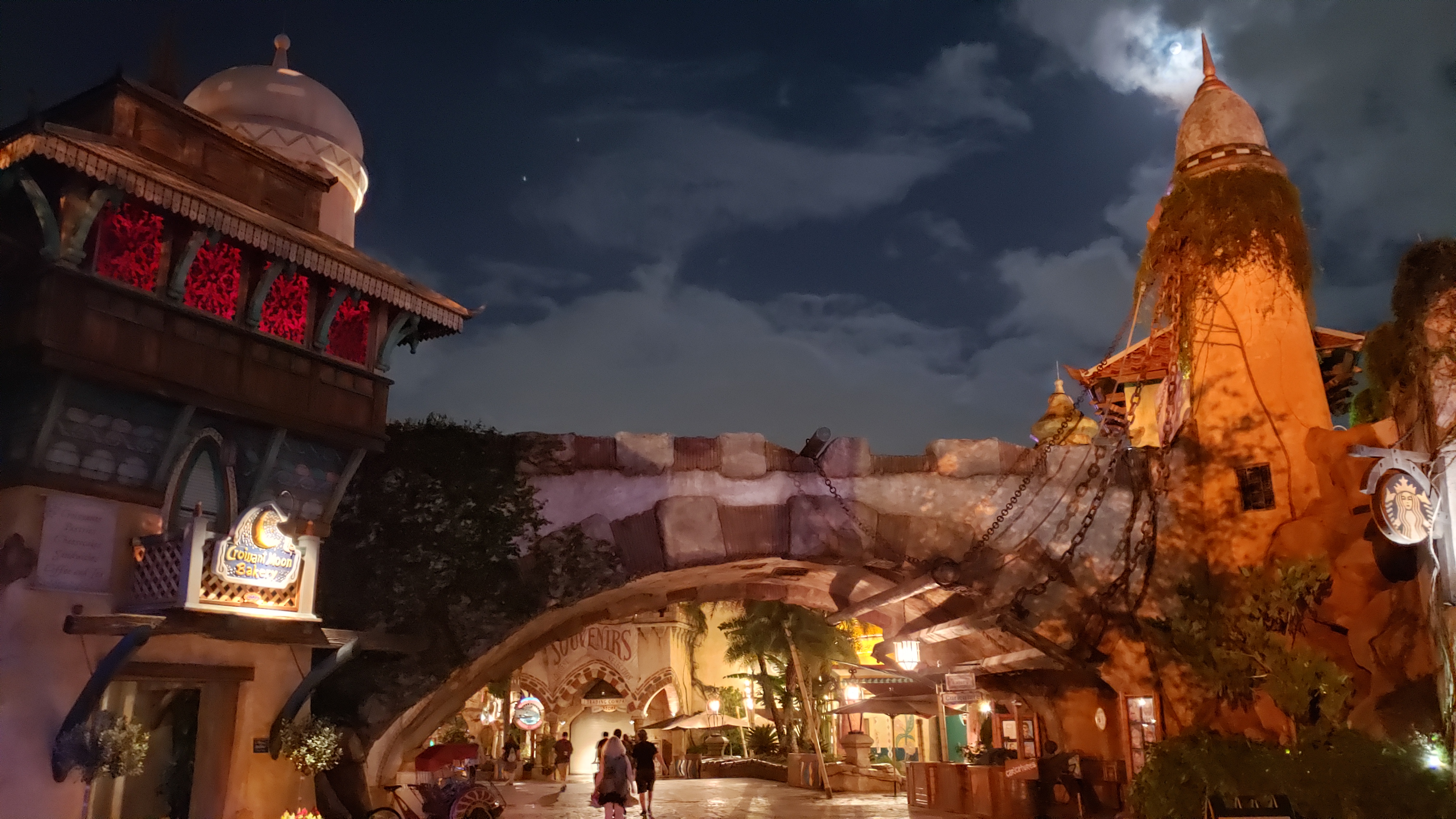 Not any more. As it turned out, our instincts were correct. The Dark Arts at Hogwarts Castle is definitely something to be marveled at, and you don’t need to be a Harry Potter fan to enjoy the full eight-minute presentation, that will be running on selected nights from now until November 15.

We were invited to the opening night of this new special effects spectacular last Saturday (Sept 14) and, while we were hugely impressed, we actually got more than we bargained for. A LOT more!

Just to start with, it was a wonderfully brooding late evening to be in the park, with a strong breeze whipping fast-moving shreds of cloud across a full moon above the Wizarding World of Harry Potter – Hogsmeade. This fantastically creative ‘land’ is atmospheric enough at night, with its subtle and evocative lighting, but with the sky adding its own special effects and that extra layer of moodiness, we all suspected we were in for something special. We weren’t wrong. 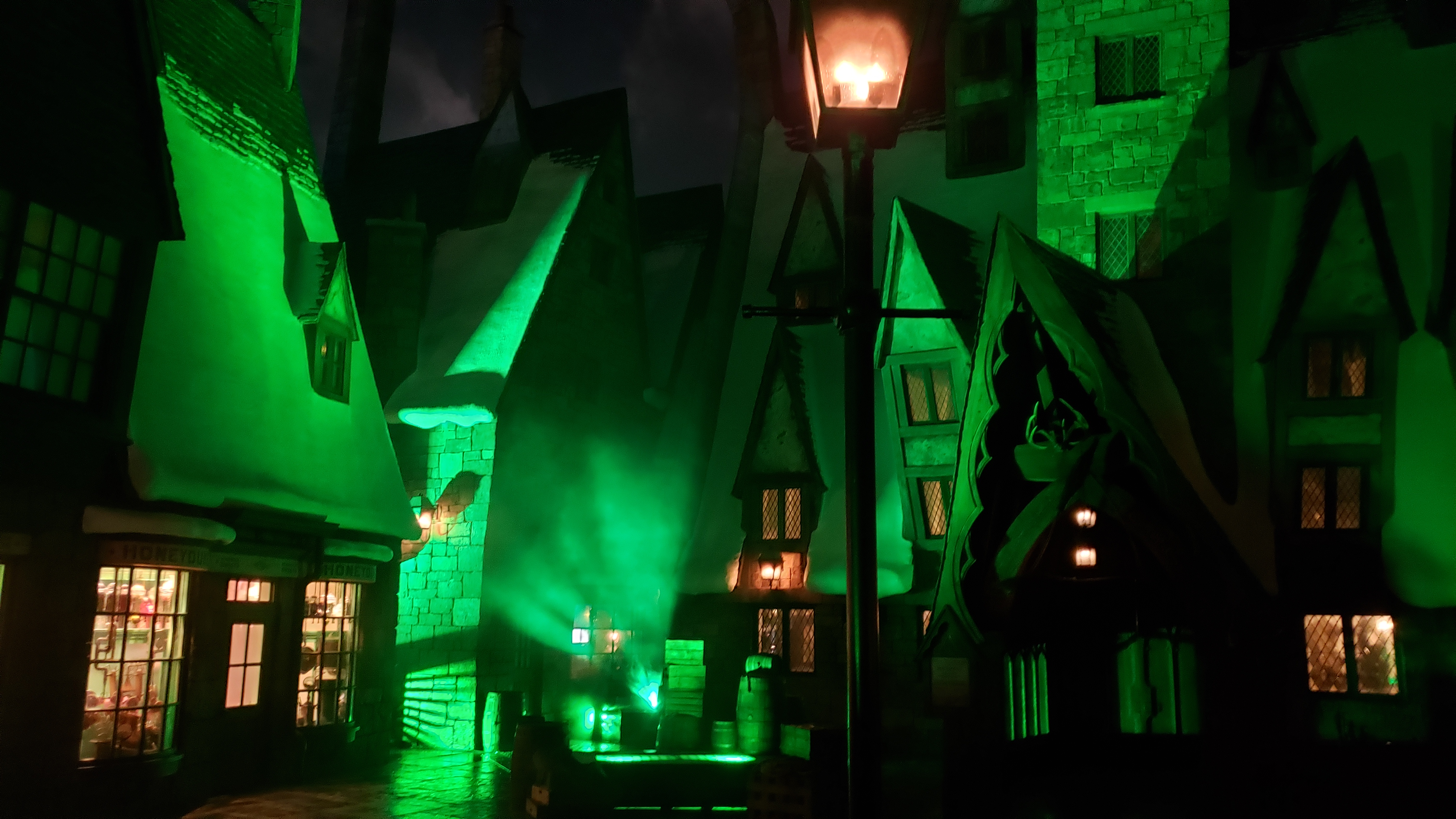 We were led in to the Wizarding World to be greeted by disturbing green lighting effects, with a mini stage set up in front of The Three Broomsticks restaurant. Intriguing? You bet. And we soon found out why.

With a creepy musical backing, three Death Eaters suddenly took to the stage, raising their wands in unison to set off a crackling overhead pyrotechnic blast. They were then joined by four more of their menacing brethren and, for the next 10 minutes, the streets of Hogsmeade were subject to the roving peril of these deathly characters (all in good fun, of course, and with a terrific photo opportunity!).

No sooner had they departed the scene (dragging a hapless victim with them, who we THINK was manning the Butterbeer cart!) than the lights around Hogwarts began to dim in preparation for the new show. 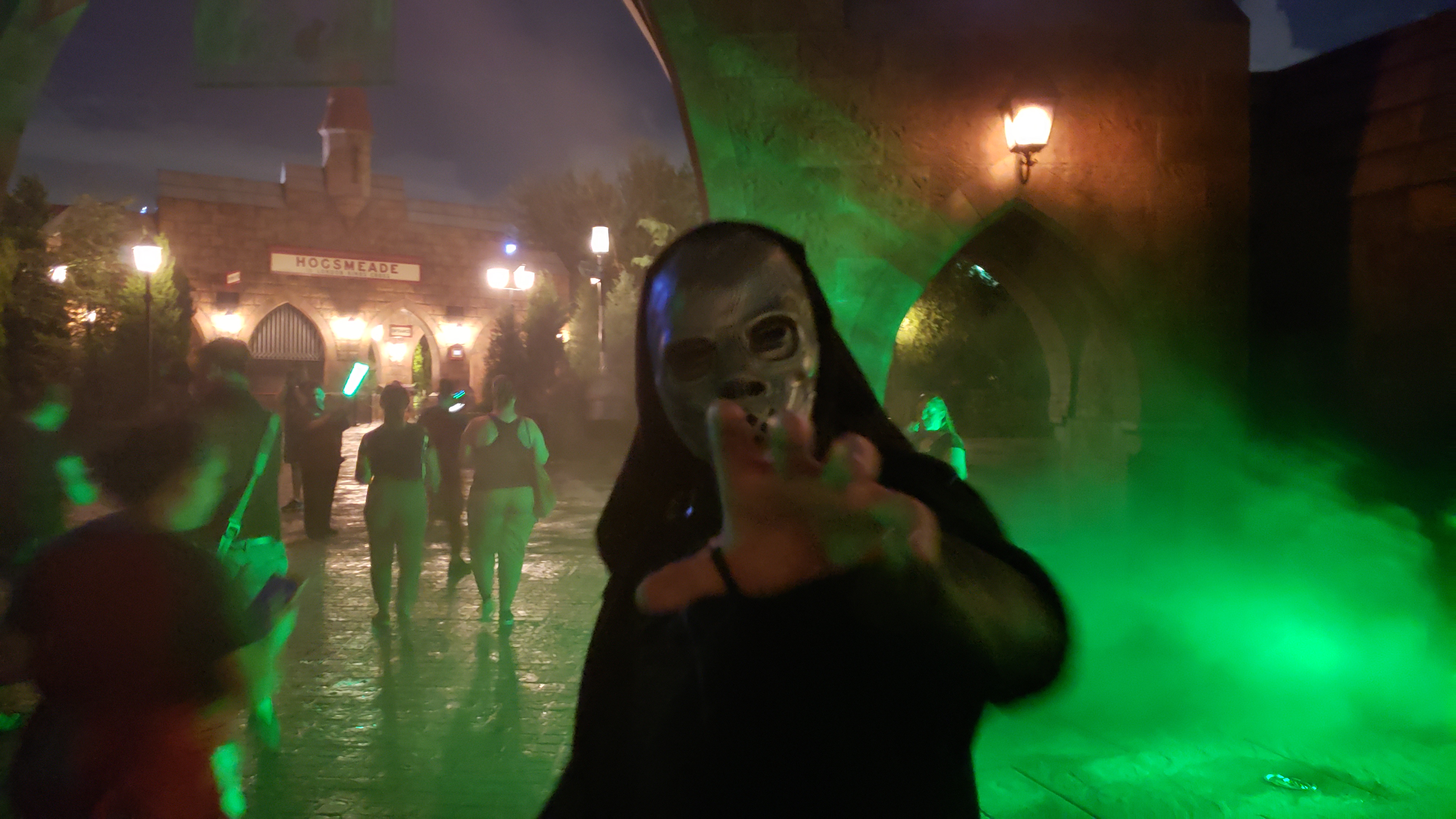 The optimum position to watch from is just to one side of the main stage next to Flight of the Hippogriff, where The Frog Choir appear several times during the day (try to stand a bit further back than the majority, as you’ll want to get the full panoramic view of the Castle).

It all begins with the ominous tolling of a bell, banks of fog and the sinister voices of the Death Eaters, casting an evil spell over the Castle, ready to raise all the creatures of the dark in an all-out assault on Hogwarts.

“I knew then this was a different kind of magic. Very dark, very powerful. But until tonight I had no idea just how powerful.” Those are the words of Albus Dumbledore, haunting in the gathering darkness, and we are off on a wild ride through all the most threatening elements of the Potter story. 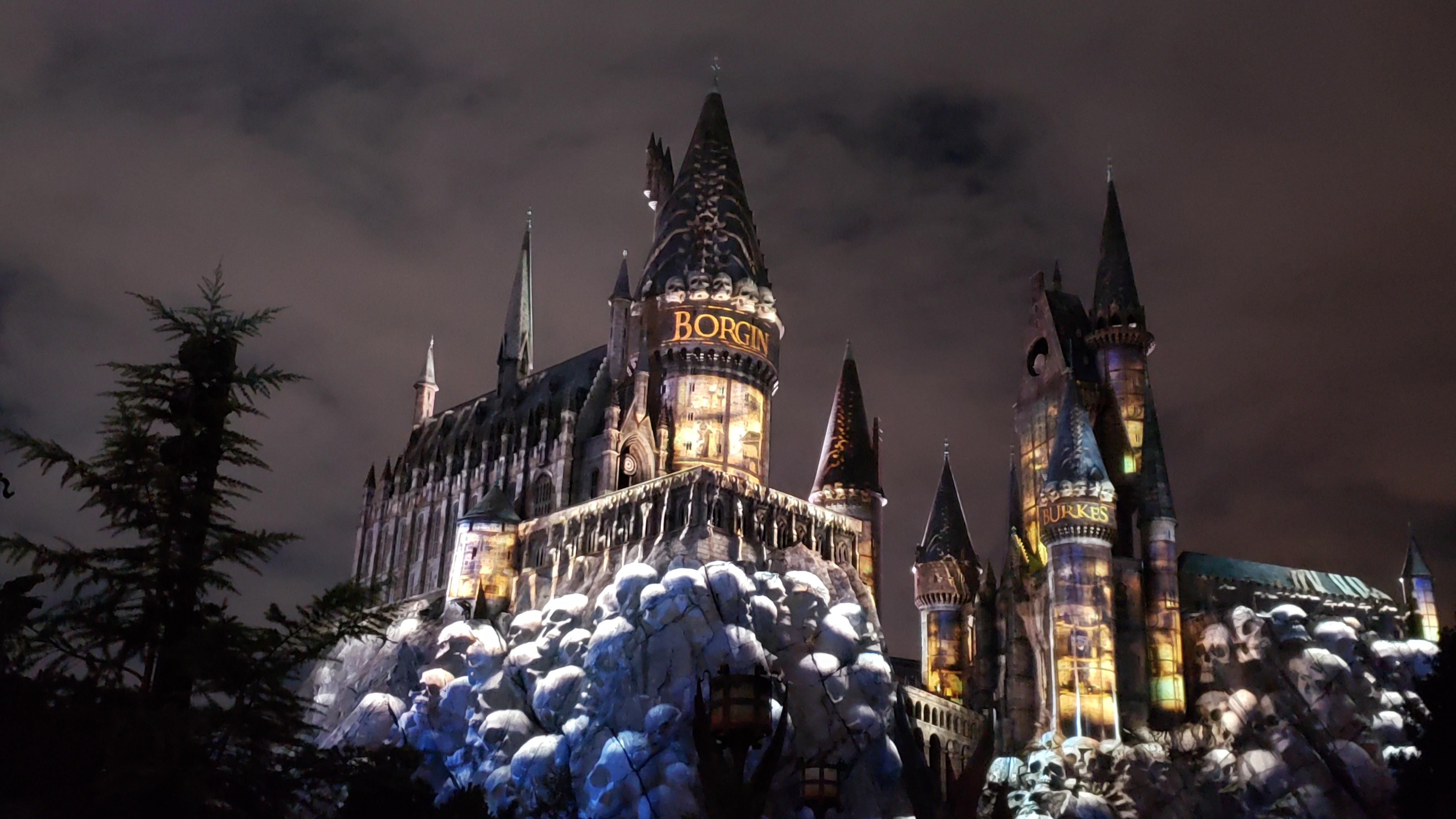 Briefly, the Castle transforms into the creepy premises of Borgin and Burkes – purveyors of artefacts of the Dark Magic – and that serves as the starting point for a mesmerising series of scenes, transforming Hogwarts into the cobweb-covered lair of giant acromantula Aragog, then a battle of Mountain Trolls, and then an outpouring of all kinds of foul beasts, including Thestrals, a giant fire-breathing Basilisk, goblins, Dementors and more!

It is a dazzling kaleidoscope of Universal’s artistry with their high-tech projection system, allied to other special effects, including pyrotechnics, floodlights and fire effects.

The conclusion, with the forces of the Castle summoning up a massed Patronus charm to counter-act He Who Shall Not Be Named, is a goosebump-inducing triumph of cinematic splendour, with Harry’s silvery-white Stag presiding over the restoration of the school in a classic Hollywood ending. 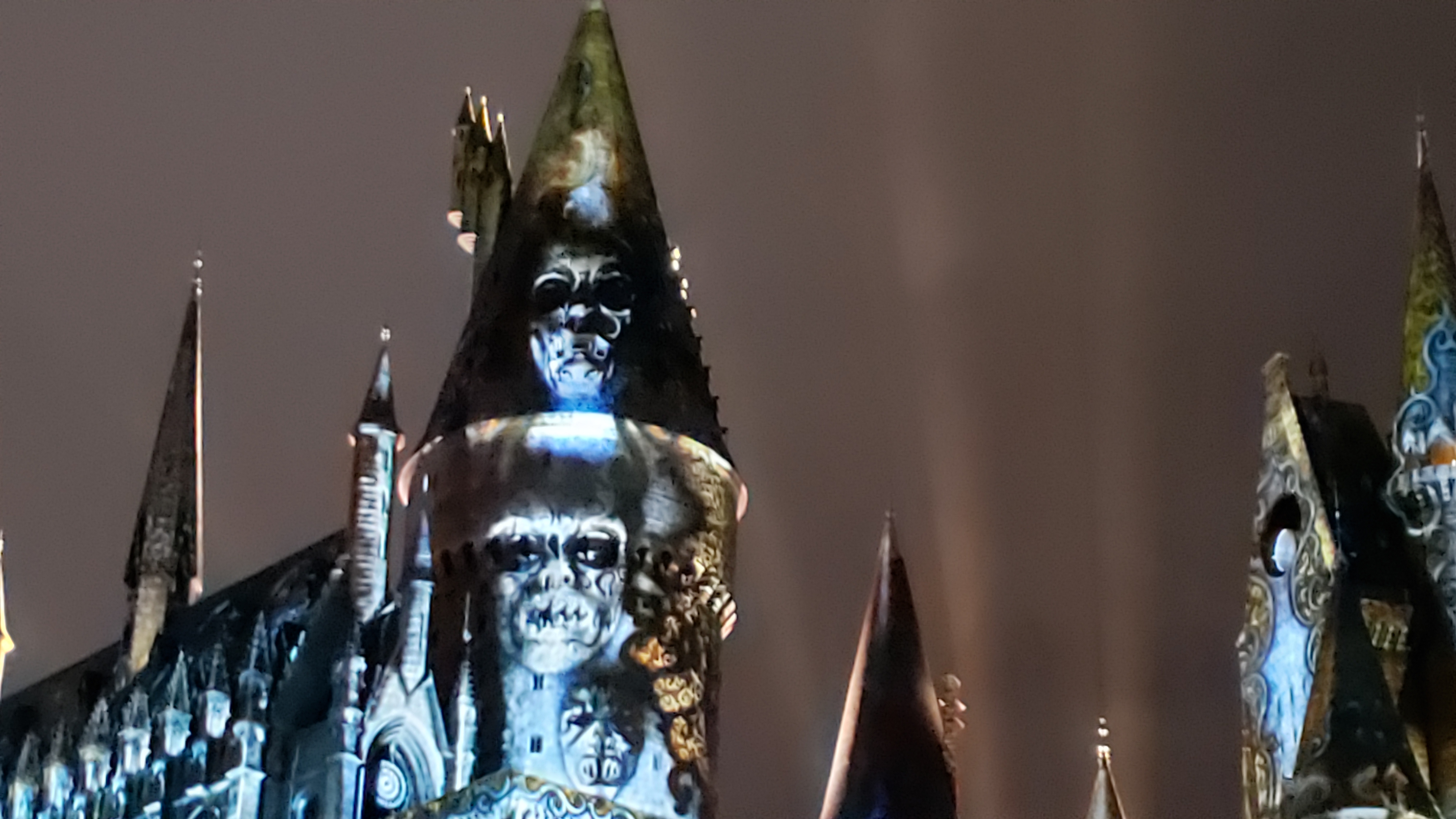 And it is all under-pinned by an originalmusical composition written especially for the occasion, based on the famous original movie scores by John Williams, and conducted by prolific film musical supremo William Ross, who recorded it with the London Symphony Orchestra (and who also worked on Universal’s Skull Kingdom: Reign of Kong attraction).

It will run every night – with the exception of September 23, 26 and 28 – after dark at roughly 20-minute intervals, until November 15 (when the Magic of Christmas show will be unwrapped for the start of the festive season). 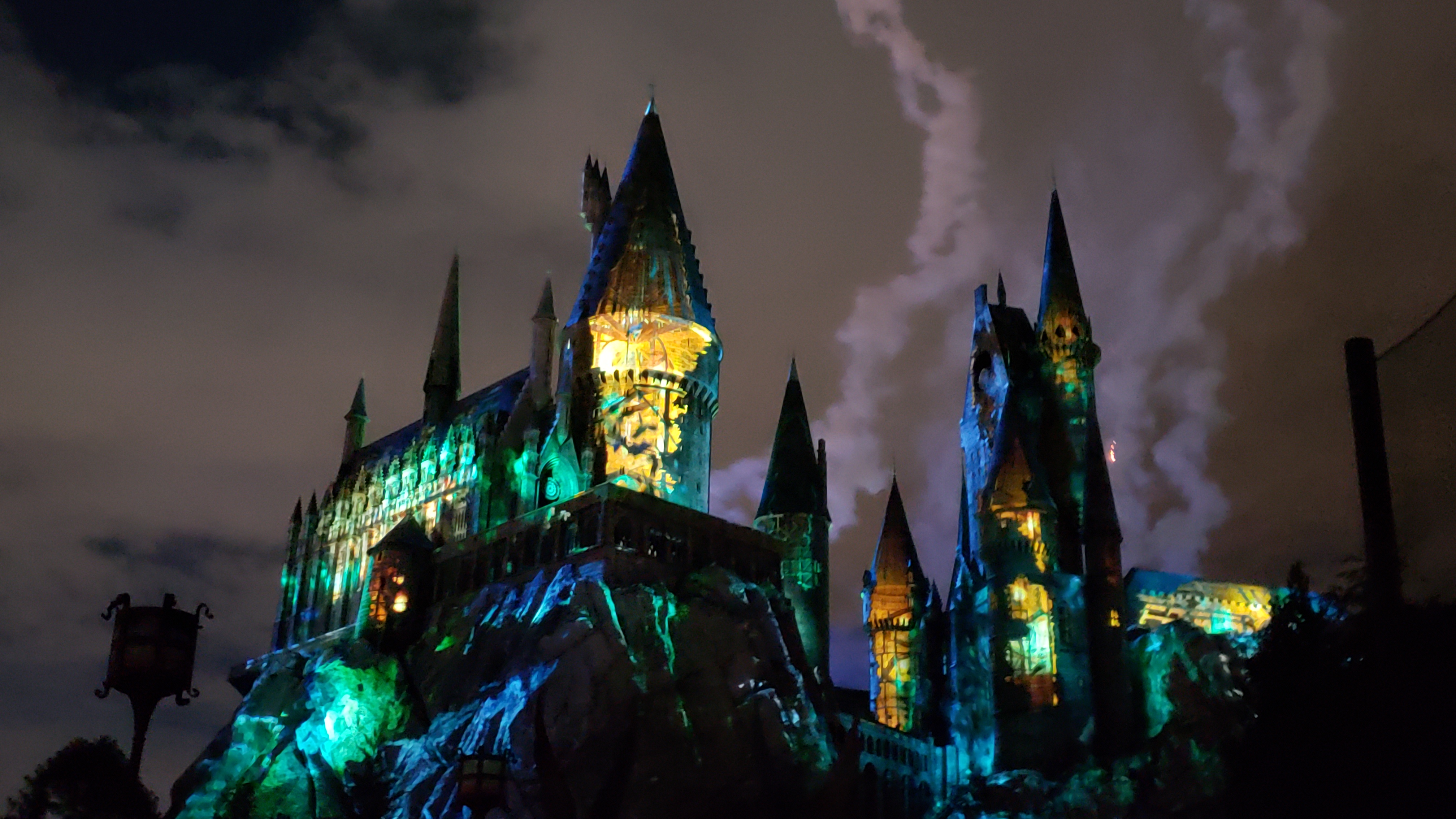 For Potter fans, it is simply a must-see, while even those who don’t know the difference between the Deathly Hallows and Wind in the Willows will surely enjoy this large-scale production of audio-visual brilliance.

For us, we are still trying to get over our encounter with those Death Eaters…!

Have you seen been to the Wizarding Worlds of Harry Potter at Universal Orlando and seen any of the projection shows? Tell us your thoughts on the friendly ATD forums.