Orlando , Disney World , Disney's Hollywood Studios , New Attractions 2015 , Disney News
Hats off to you...
We tip our hats to the giant fixture that has been a photo opportunity highlight for many lucky enough to enjoy Disney’s Hollywood Studios in Orlando.

First it was speculation, then rumours and at last it was confirmed. However the work has begun as Mickey’s Sorcerer Hat in Disney’s Hollywood Studios starts to be dismantled. It may not have reached the same status as Cinderella’s castle, but Disney theme park fans are certainly sad to see it go.

So for those of you who loved the hat or even if you never had a chance to strike a pose with it (or with a character underneath it), we bring you five interesting tidbits that we’d like to share…

As if you didn’t already know, the giant hat is modelled after the one Mickey Mouse wears in the Sorcerer’s Apprentice segment of Disney’s spectacular 1940’s feature, Fantasia. The hat is now as much a part of Mickey as his gloves, but what you may not remember is that it actually isn’t his hat! He ‘borrowed’ it from the sorcerer. What you also may not know is that the sorcerer’s name is ‘Yensid’ (that’s Disney, spelt backwards).

If the Cap Fits…
Standing at 122 feet tall, Mickey would have to be 350 feet tall in order to put the huge hat on! For some perspective, the Christ the Redeemer statue that overlooks Rio de Janeiro in Brazil stands at 125 feet from base to top – that’s only THREE FEET IN DIFFERENCE!

Wherever I lay my Hat…
…That’s the Sorcerer hat’s home. The structure first opened in 2001, back when Disney’s Hollywood Studios was known as Disney’s MGM Studios. It was built as part of the celebrations to honour the 100th anniversary of Walt Disney’s birth. 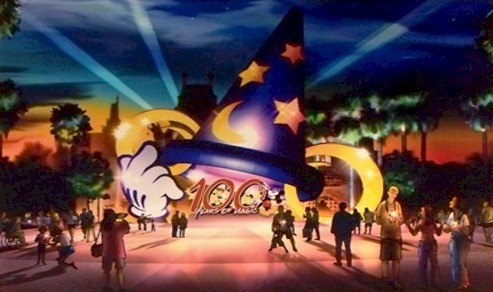 Bee in the Bonnet
At first, there were some objections to the construction of the Sorcerer Hat. People felt that it blocked the view of the replicated Mann’s Chinese Theatre, home to The Great Movie Ride (currently receiving a little renovation surgery). However, soon the hat became a staple part of MGM/Hollywood Studios and fans have grown to love it.

Keep It Under Your Hat
As well as a good spot for character meet and greets, the hat served as the roof of Disney’s Sorcerer Hat Shop, one of Disney’s pin trading shops. 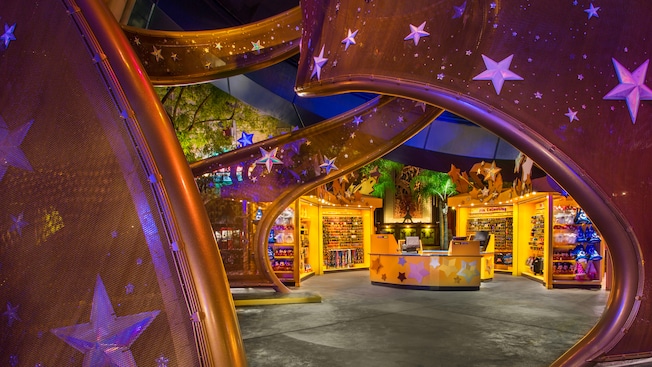 Hold on to your Hats!
Disney haven’t yet announced their plans of what’s going to happen  in the park once the hat has gone, but with the recent closures of a few other attractions at Hollywood Studios (American Idol Experience, Studio Backlot Tour and The Legend of Jack Sparrow) we believe big exciting plans are afoot and we cannot wait!
It’s Mount Rushmore’s 90th birthday in 2015, so maybe George Washington would like a hat to celebrate? The Statue of Liberty might fancy trying out one spike instead of seven for a bit. The Great Sphinx of Giza could use something to keep the head corrosion at bay. We always thought that ‘Big Ben’ could do with a little more colour. Although we can't promise Disney will give us the heads up on the new home of Mickey's Sorcerer's Hat, we will be able to keep you updated on the new Disney phenomena that will replace it as soon as we get the news.  So make sure you keep checking back in at the Attraction Tickets Direct Blog.  Till then, take a look at our amazing 2015 Disney tickets for an Orlando theme park holiday!
Orlando , Disney World , Disney's Hollywood Studios , New Attractions 2015 , Disney News
Tweet