Everything We Know About SeaWorld and Busch Garden's NEW Rollercoasters

By ATD’s Florida Experts, Susan and Simon Veness
It's time to find out more about Ice Breaker and Iron Gwazi - SeaWorld Orlando's and Busch Gardens Tampa Bay's new rollercoastsers, coming to the parks in 2020.

If there is one of Orlando’s many theme parks that tends to fly a little under the radar, it is SeaWorld. Even though it’s been here since 1973, it still tends to get overlooked when it comes to the big announcements. That is changing – and in a hurry.

This week’s unveiling of a ground-breaking new roller-coaster for 2020 was no small event but, more importantly, it signaled another step in the gathering transformation of a park that tended to be branded as the dolphin-and-whale place and not a lot else. But that is SO 1990s.

In fact, it was in 1998 that the first step in this major makeover took place, when SeaWorld opened its Journey to Atlantis ‘water-coaster’, and it proved such a hit, they decided to invest in more high-thrill rides.

The multi-inversion Kraken soon followed, then the kiddie-friendly Shamu Express (now Super Grover’s Box Car Derby in the Sesame Street playland) and the powerful Manta, in 2009. Three years ago it was Orlando’s biggest coaster, Mako, and now we can look forward to the park’s first fast-launch ride – and more besides! 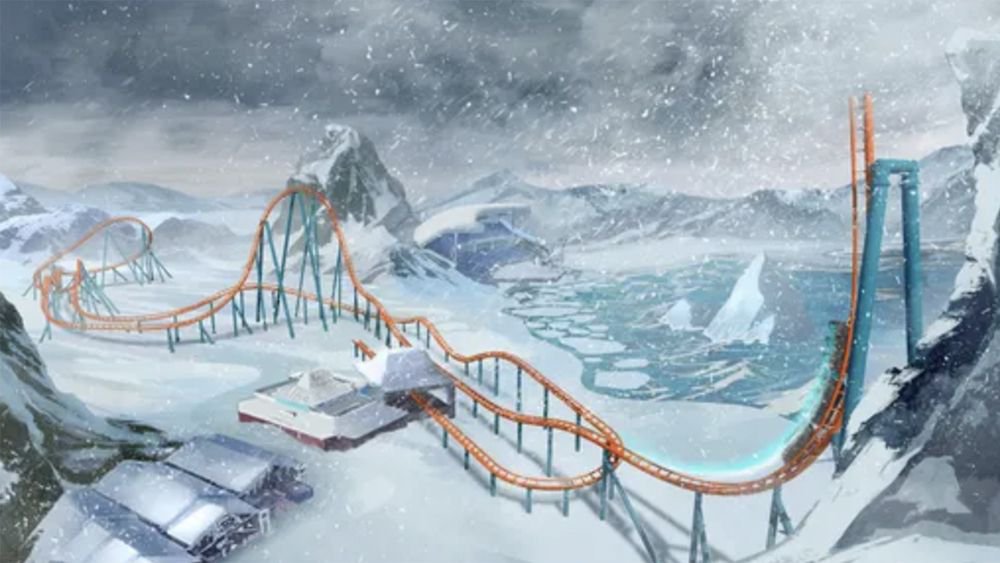 It is called Ice Breaker, and it promises to raise the bar still further on SeaWorld’s investment in high-tech ride technology – as well as rides with a high adrenaline appeal.

We’d heard rumours of it for a few months, and seen the first signs of construction when we visited for the Electric Ocean programme in June. The park also teased a hint of it with a #BreakTheIce hashtag the same month. Orlando’s avid theme park watchers raised their alert level to DEFCON One.

And, on Thursday (Sept 12), we learned the full details – and raised our own interest levels to “Yes, we’re seriously impressed!”

During a special press conference – held by livestream in conjunction with Busch Gardens down the road in Tampa, as they announced their Iron Gwazi coaster for 2020 – SeaWorld’s vice-president of design and engineering Brian Andrelczyk laid out the formula for some major ice-breaking. 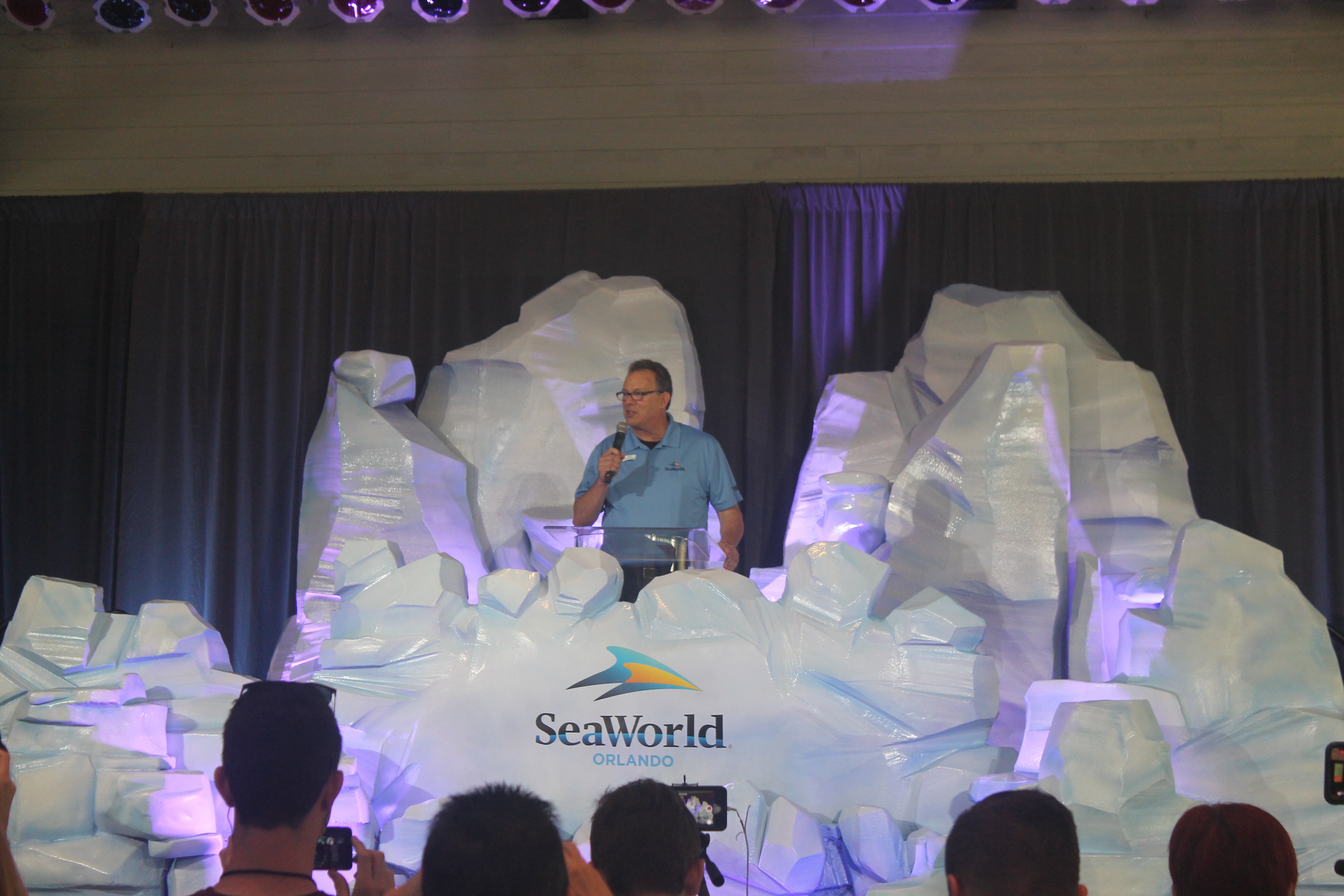 “This is SeaWorld Orlando’s first launch coaster,” he told us. “And not just one launch – we will launch you FOUR times. We will start out with a horizontal track switch, and then launch you backwards to start with, up Florida’s steepest, beyond-vertical drop, with a 93ft vertical spike that is tilted at 100 degrees,” (that’s a full 10 degrees beyond vertical for those keeping count at home!).

Brian had more in store, though. He continued: “Even then, the fun’s just getting started, because we’ll continue with a forwards launch, a second backwards launch and another forwards launch, rocketing you to 52mph, all along a unique launch track that has an air-time hump at each end.”

By this time, our eyes were ready to glaze over in delight at the thought of all this backwards and forwards “rocketing.” Having sampled the new back-and-forth fast-launch coaster Tigris at Busch Gardens this April, we were already set to admit this sounded like a fabulous piece of roller revelry, but then Brian revealed more. 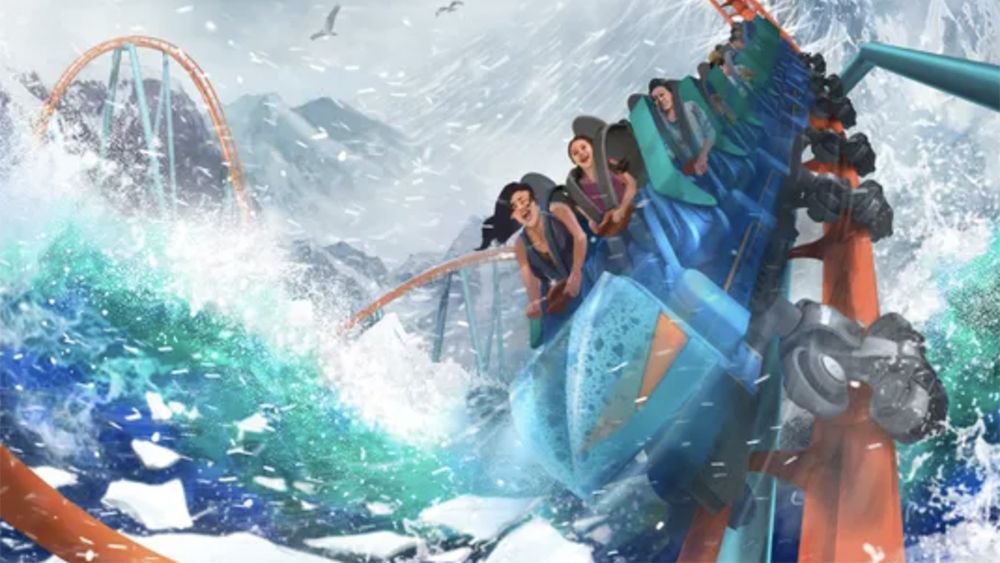 “The fun continues with a ‘top hat’ element that has a near-vertical climb and twist and a near vertical drop,” he added. “That is followed by low-to-the-ground air-time hills, twists, turns and other directional changes, all along 2,750ft worth of travelling distance.

“That all sounds really thrilling, and it sure is, but the ride is accessible for [almost] the entire family with a 48-inch tall rider height requirement. This is SeaWorld’s sixth roller-coaster and adds even more diversity to our already amazing collection of coasters. Ice Breaker will be located in the Wild Arctic plaza and will take theming cues from the Wild Arctic attraction next door.”

Brian completed his presentation with the promise we will all be invited back to try out this particular attraction “in spring 2020,” which seems a pretty remarkable timetable for a brand new ride that is still only the bare construction site at the moment, mid-way between Shamu Stadium and Bayside Stadium towards the rear of the park, alongside the lagoon and behind what is currently Mango Joe’s “castaway cuisine” adjacent to the Wild Arctic attraction. 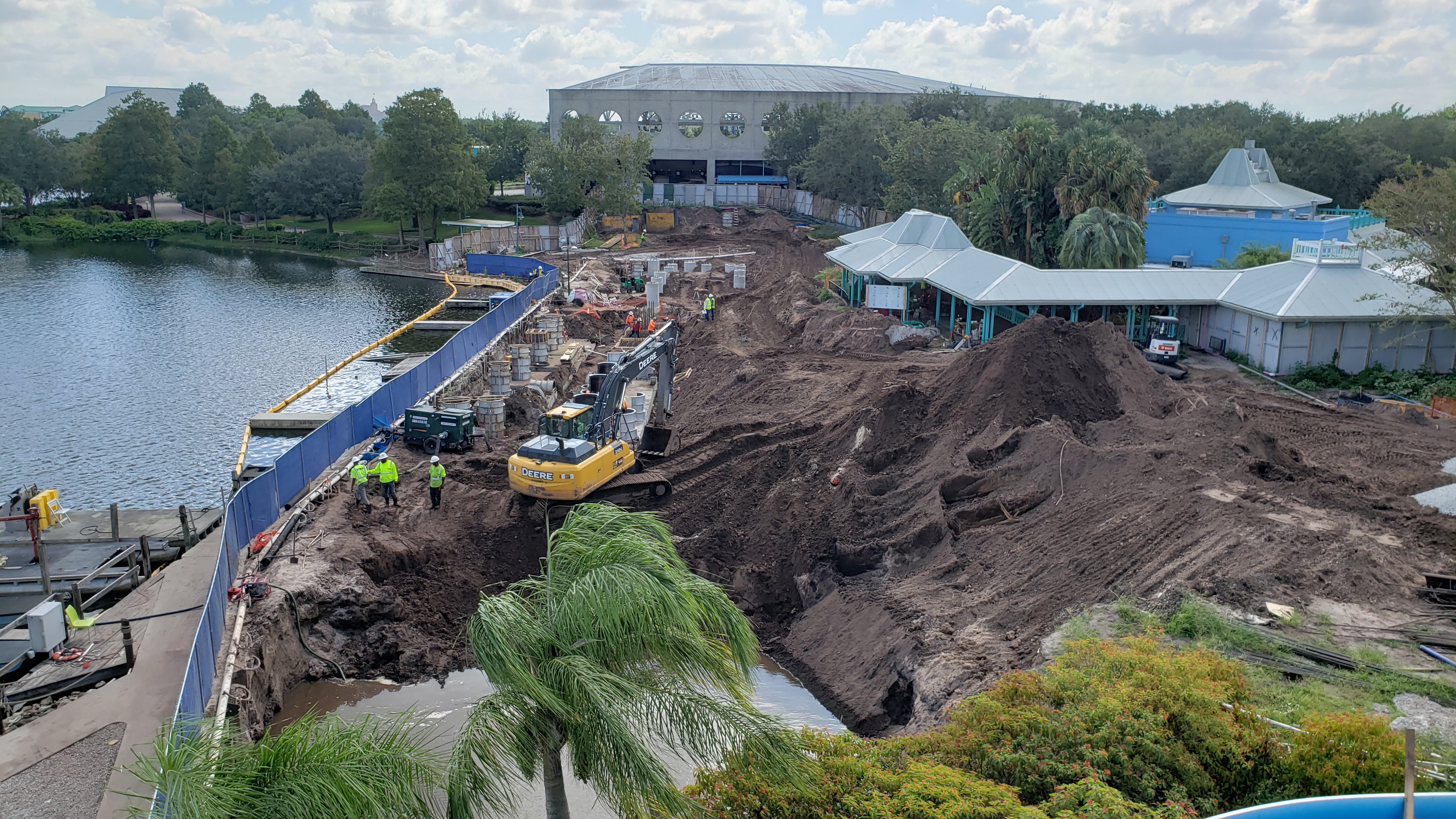 However, SeaWorld did complete the magnificent Mako in less than a year of total construction in 2016, so a completion date of next April seems reasonable. The fact is, “2,750ft worth of travelling distance” is not a long track by coaster standards (about 110 seconds of ride time, it is estimated), little more than half that of Mako, but its radically different design should guarantee a five-star thrill.

In fact, if you combine Tigris with another stellar Busch Gardens ride, the fast-launch coaster Cheetah Hunt, you probably go a long way towards understanding the feel of Ice Breaker.

Just to complete an amazing picture of coaster bliss for those of us who can’t walk past one of these amazing steel contraptions without riding, our press conference was extended via video screen from Busch Gardens, where park president Stewart Clark was finally ready to give the lowdown on their new coaster, Iron Gwazi. 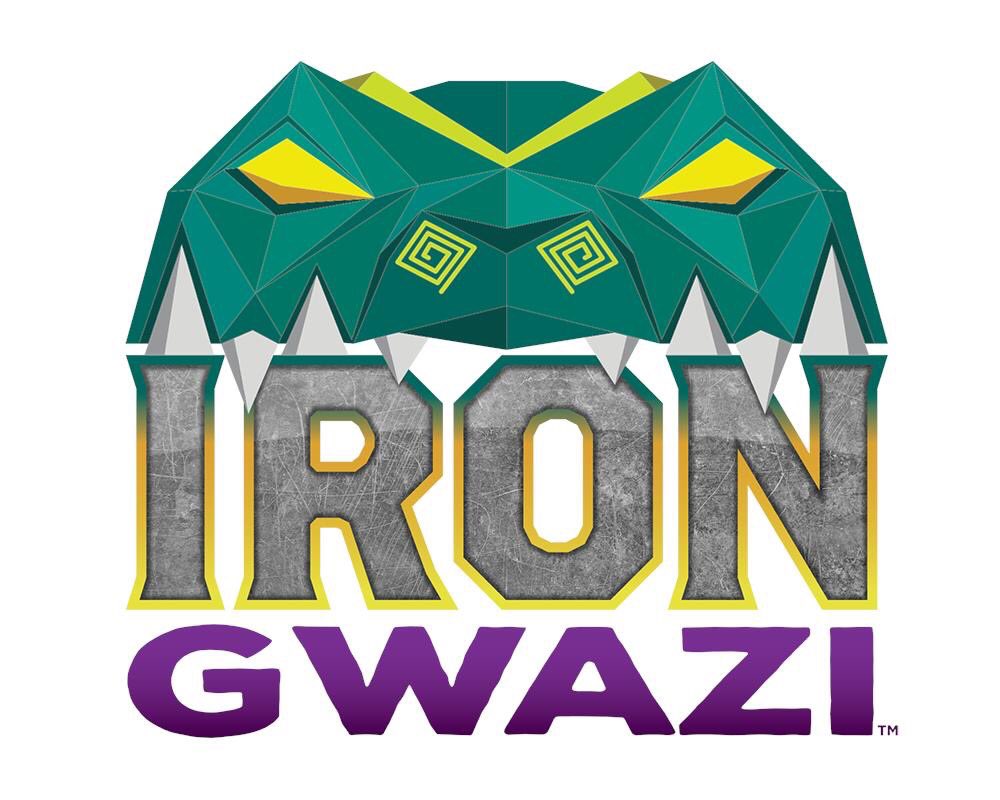 It has been quite a ride, if you’ll pardon the phrase, for the original Gwazi attraction, a twin-track ‘duelling’ wooden coaster that made its debut in 1999 and quickly became a huge fan favourite for its rattlin’ good ride. Over the next 16 years, there became just a bit too much rattling for even the most die-hard aficionados, though, and Gwazi closed in early 2015.

Its huge wooden edifice continued to dominate the park’s skyline, however, and last year the park announced there would be a future for it after all, with part of the structure being reworked as an all-new hybrid wood-and-steel construction. Given the working title of Gwazi2020, we eagerly awaited news of the full makeover, which Clark finally delivered via Thursday’s livestream. 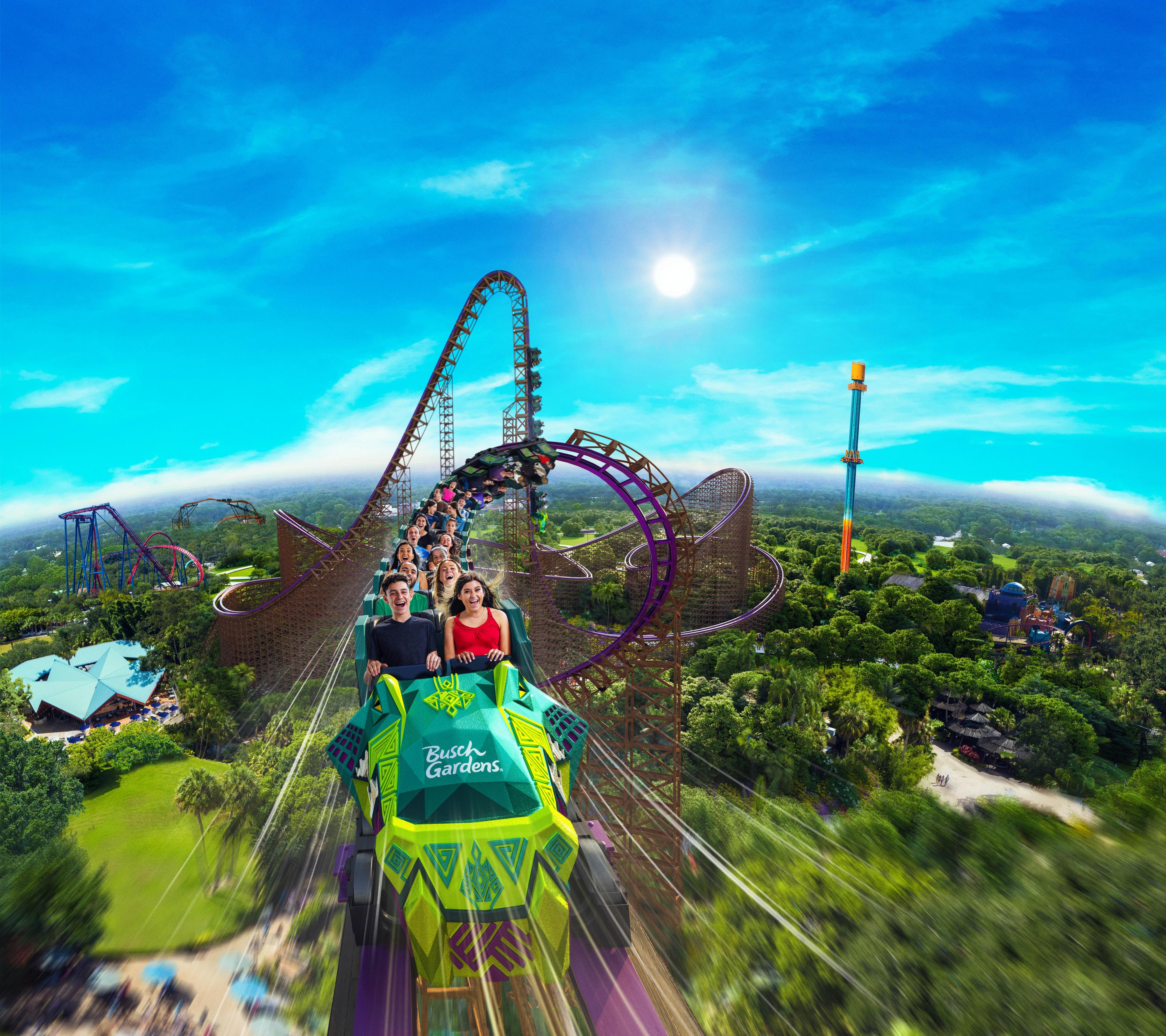 In simple terms, Iron Gwazi will be a monster, the tallest hybrid coaster in North America, and the fastest and steepest in the world. It will tower to a full height of 206ft, reach a top speed of 76mph – faster than any other ride in Florida – and drop at an angle of 91 degrees, with a total track length of 4,075ft.

There will be 12 air-time features and three full inversions, and coaster fans are already salivating at the thought. Mind you, we’re pretty impressed. TWO major new coasters at the same time in central Florida next spring? We can’t wait…!

Busch Gardens or SeaWorld - which ride most catches your attention for 2020? Tell us your thoughts on the friendly ATD forums.

Have you signed up to our email newsletter? Keep up to date with all the latest new and ticket offers. Click here to add your details.