If You Can Imagine It, You Can Re-imagine It!

Orlando , Disney World , Epcot , Veness Column
By Susan and Simon Veness
With a resort as big as Walt Disney World, it is inevitable change will happen, and this week’s watchword is “re-imagining”. From a classic ship, to Morocco, the South Seas, Disney’s shopping mecca and a humble soda dispenser, the House of Mouse is busy this week, so please pardon their dust while Disney “Enhances This Area For Your Future Enjoyment.” 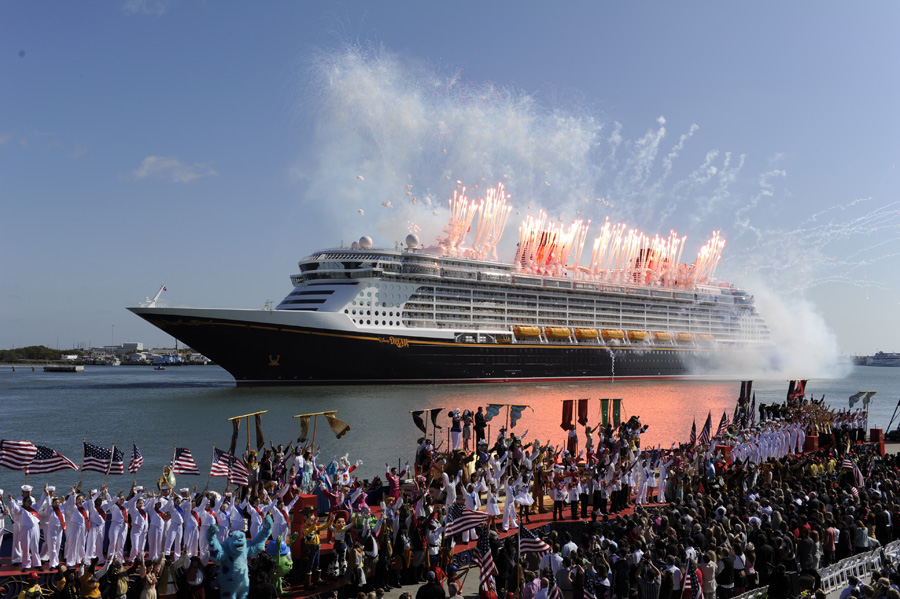 Disney Cruise Line debuted the re-imagined Disney Magic this past week, adding the MARVEL Avengers Academy and Andy’s Room from the movie Toy Story to the existing Oceaneer Club kids area, and the character Captain America to their meet-and-greet line-up. Aqua Dunk water slide (where the floor falls out from beneath you at the start) and Aqua Lab water play area are new, as is Cabanas buffet, with its Australian theme based on the hit movie Finding Nemo. In the adult nightclub area, Rockin’ Bar D has become funky, under-seas Fathoms, Dimensions has become the sports bar O’Gills Pub, Sessions is re-themed as the upscale Keys piano bar, and Studio Sea has become D Lounge, while Animator’s Palate and Senses Spa have also been greatly enhanced (wait until you see the graphics in Animator’s Palate as Drawn To Magic begins!). With 4 and 5 day sailings out of Miami (and then moving to Port Canaveral), it makes an interesting break without losing any of the magic, especially during an Orlando holiday of 3 weeks or more. Land-side, Morocco in Epcot is being ‘re-imagined’, with Spice Road Table restaurant coming along nicely on the waterfront. Indoor and outdoor seating will add 180 new seats to the pavilion, with a fabulous view of the nightly IllumiNations spectacular. Sight barrier along the back of the restaurant (facing the pavilion) are slowly being removed, revealing textures and hues in keeping with the pavilion’s original structures. When it opens—and it should be opening soon—the restaurant will serve tapas and small plate choices, making it an excellent option for lighter appetites or a snack and a drink at show time. But the re-imagining isn’t limited to big spaces. A small but beloved area in Epcot has been ‘re-imagined’ (sort of) too. Originally designed as the polar expedition Ice Station Cool, it was one of the few places in Walt Disney World where guests got something for free—namely, samples of Coca-Cola products from around the world.
Say good-bye to the former flavours from Mozambique (Krest Ginger Ale), Costa Rica (Fanta Kolita), Isreal (Kinley Lemon), Mexico (Lift Apple), China (Smart Watermelon), and Germany (Mezzo Mix).
Say hello to the new line-up from six countries, with their descriptions as follows:
Greece (Fanta Pineapple): Fanta has more than 90 distinct flavors available in more than 180 countries. It made its European debut in the 1940s and was introduced to the USA in 1960. Fanta Pineapple is caffeine-free and features a sweet pineapple taste.
Thailand (Fanta Melon Frosty): Fanta is the number one soft drink of Thailand. With a fun melon flavor, this carbonated beverage is beloved in Thailand’s sunny, tropical climate.
South Africa (Bibo): Originally created in 1998, Bibo is a fruit flavored line of juice drinks popular in South Africa. The brand features fun characters such as Johnny Orange, Taka Strawberry and Paolo Peach.
Zimbabwe (Sparberry): A raspberry flavored cream soda, Sparberry launched in Africa in 1955. It is exclusively available in several countries in southeast Africa.
Peru (Inca Kola): Known as ‘The Taste of Peru,’ this soda has an unusually sweet fruity flavor that many compare to the taste of liquid bubblegum. The name ‘Inca Kola’ refers to the Quechua words for king and queen.
Brazil (Guarana Kuat): Guarana Kuat is a guarana berry flavored soft drink first launched in Brazil in 1997. The word guarana comes from the Guarani word guara-na, which translates to ‘fruit like the eyes of the people.’
Vegeta Beta from Japan and the Italian soda Beverly are still available. If you’ve tried the Beverly, you know the ‘joke’. If you haven’t, have your camera ready when someone in your group takes a sip. ‘Nuff said.
Over at Disney’s Hollywood Studios, the Brown Derby restaurant has added the outdoor seating area of the Brown Derby Lounge, with alcoholic drinks and ‘small bite’ dining. Ultimately, it’s a bar created on the existing patio, but with the added benefit of taking advantage of Orlando’s beautiful evening weather.
Downtown Disney has ‘re-imagined’ its parking, at least from 4pm-2am during the busy season, from now through the new year. Valet parking is being offered for a cost of $15. On one hand, makes it much easier to park without the hassle of driving around for half an hour now that three sections of the parking lot are boarded off in preparation for the upcoming Disney Springs. On the other hand, valet parking is onsite, which takes up spaces that were formerly free.

But the biggest re-imaging of all (until Disney Springs replaces Downtown Disney) is coming to Disney’s Polynesian Resort in 2015, adding a Disney Vacation Club section to the existing property, which, by all accounts, will be renamed Disney’s Polynesian Village Resort. Two existing longhouses in the Tahiti and Rapa Nui sections, and the Sunset Pointe area, will give way to DVC villas. If the rumours are true (and we believe they are at this point, though plans for the DVC addition have changed several times) Vacation Club members will be able to make their South Seas dreams come true in one of a series of exclusive bungalows along the waterfront—actually, right in the water, accessed via a multi-armed dock. The addition will completely change the Seven Seas Lagoon panorama in a way the DVC villas of Bay Lake Tower at the Contemporary Resort and the Grand Floridian Villas did not, but we think change is a good thing sometimes, and if nothing else, looking across the water at those bungalows—if they make the final cut—will certainly be eye-catching!
For your own Walt Disney World resort experience be sure to check out the Attraction Tickets Direct range of Disney tickets.