By ATD’s Florida experts Susan & Simon Veness
Okay, so there are still almost five months to go to the event itself, but here in Orlando the festive season is already under way – Welcome to Christmas in July!

That’s right, the calendar hasn’t even ticked over to August yet (which is, of course, the start of the Halloween programme), and we are already up to our eyes in (fake) snow, tinsel and thoughts of Santa and the Holiday season.

It may seem bizarre when the UK is having one of its driest summers for almost 60 years (and we are having one of our wettest in Central Florida!), but many people do turn their attention to Christmas at this time of year, and not just because the full festive season starts in early November.

The parks are already putting out the Yuletide message, places like the amazing Gaylord Palms Resort are highlighting their annual ICE! festival, and it’s all primarily because Christmas events are such a big deal here – and so massively popular – that people start planning for them months in advance. 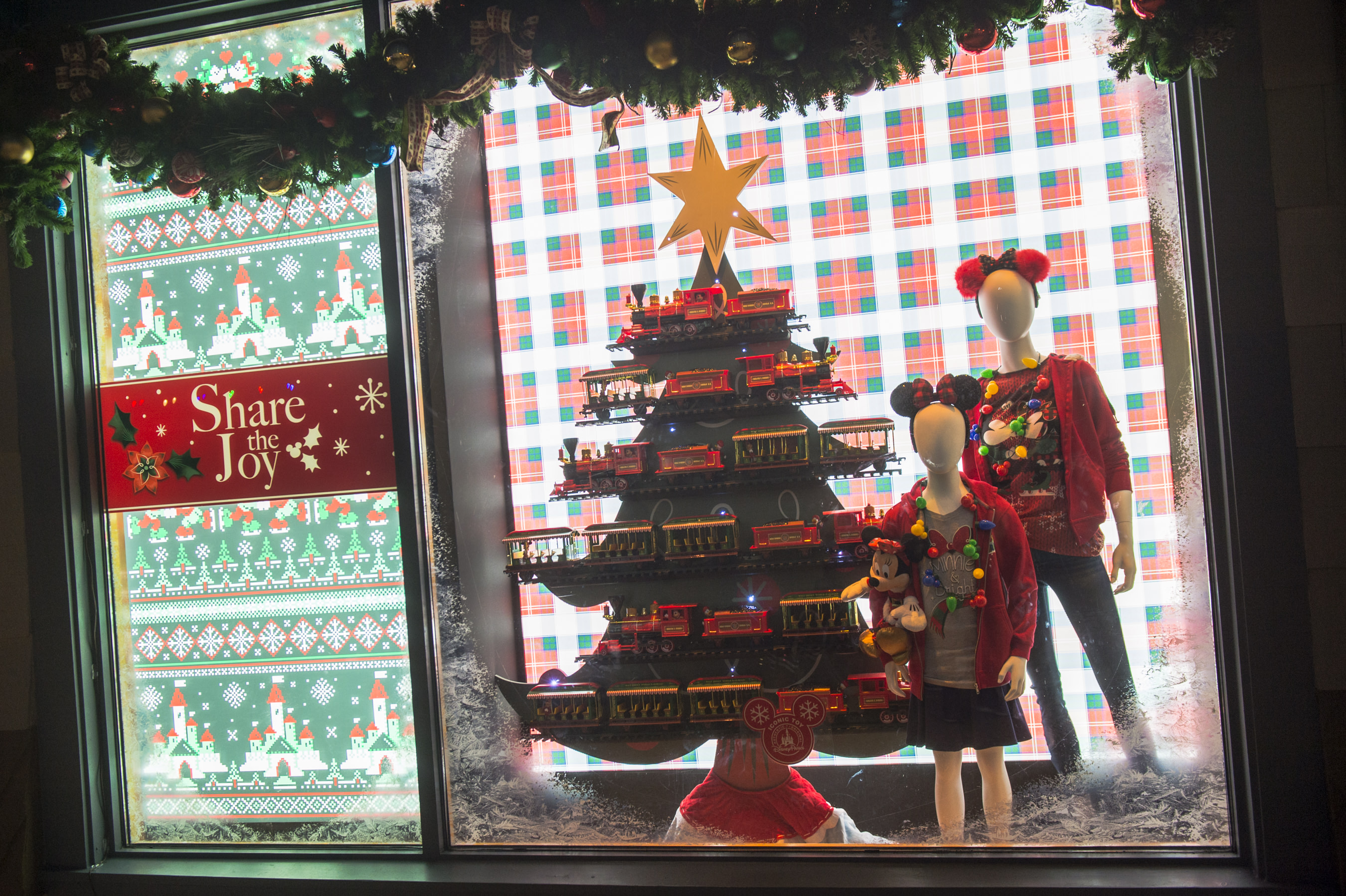 It is far and away the biggest seasonal event in the Sunshine State, and that’s saying something when you consider how big things like Halloween, Thanksgiving and the 4th of July are. That means it pays for visitors to be as clued up as possible when it comes to their visits in November and December, and we are happy to oblige with the latest info.

Over the course of the last week or so, we have seen Disney stage a ‘Christmas in July’ presentation throughout Disney Springs, with Christmas-themed treats at places such as Dockside Margaritas (with their new Snowflake ’Rita), Starbucks and Goofy’s Candy Company. The Tea Trader’s Café came up with our favourite, though – a Frozen Cappuccino with Baileys. Yum! The year-round Disney’s Days of Christmas store went one better by having a ‘Summer Santa’ – suitably dressed for Florida – on hand for photos.

Hot on Disney’s heels, the Gaylord Palms previewed their big seasonal celebration and SeaWorld put out a festive sales promotion. It all serves to look ahead to the ‘real thing’ from November 8 to January 6, so here are a few highlights to anticipate if you have already booked your Orlando holiday for the period in question: 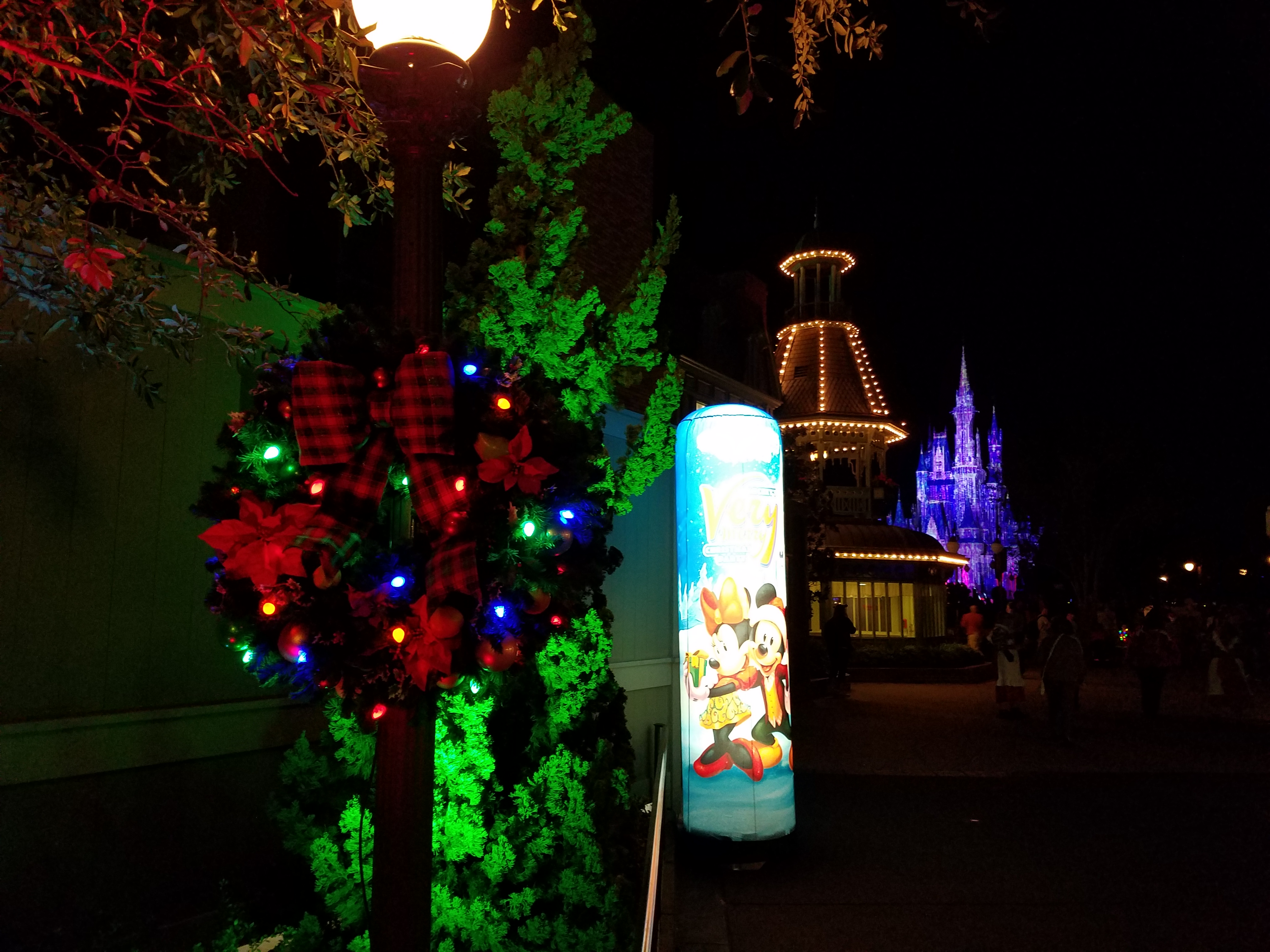 In many ways it all starts at the Magic Kingdom with the specially-themed Mickey’s Very Merry Christmas Party on select nights from November 8 to December 21. This night-time cavalcade of festive fun is a HUGE family favourite and it will be enhanced this year by the return of the Club Tinsel dance party at Cosmic Ray’s Starlight Café and A Totally Tomorrowland Christmas, with a cast of characters – including Stitch, Buzz Lightyear and Mike Wazowski – putting on their own seasonal tribute.

There are plenty of other festive touches throughout the park for this party event (from 7pm-midnight) – notably Mickey’s Most Merriest Celebration show and A Frozen Holiday Wish both on the Castle Forecourt Stage – and they all build to the headline events of the glittering Once Upon A Christmastime Parade and the Holiday Wishes firework spectacular. 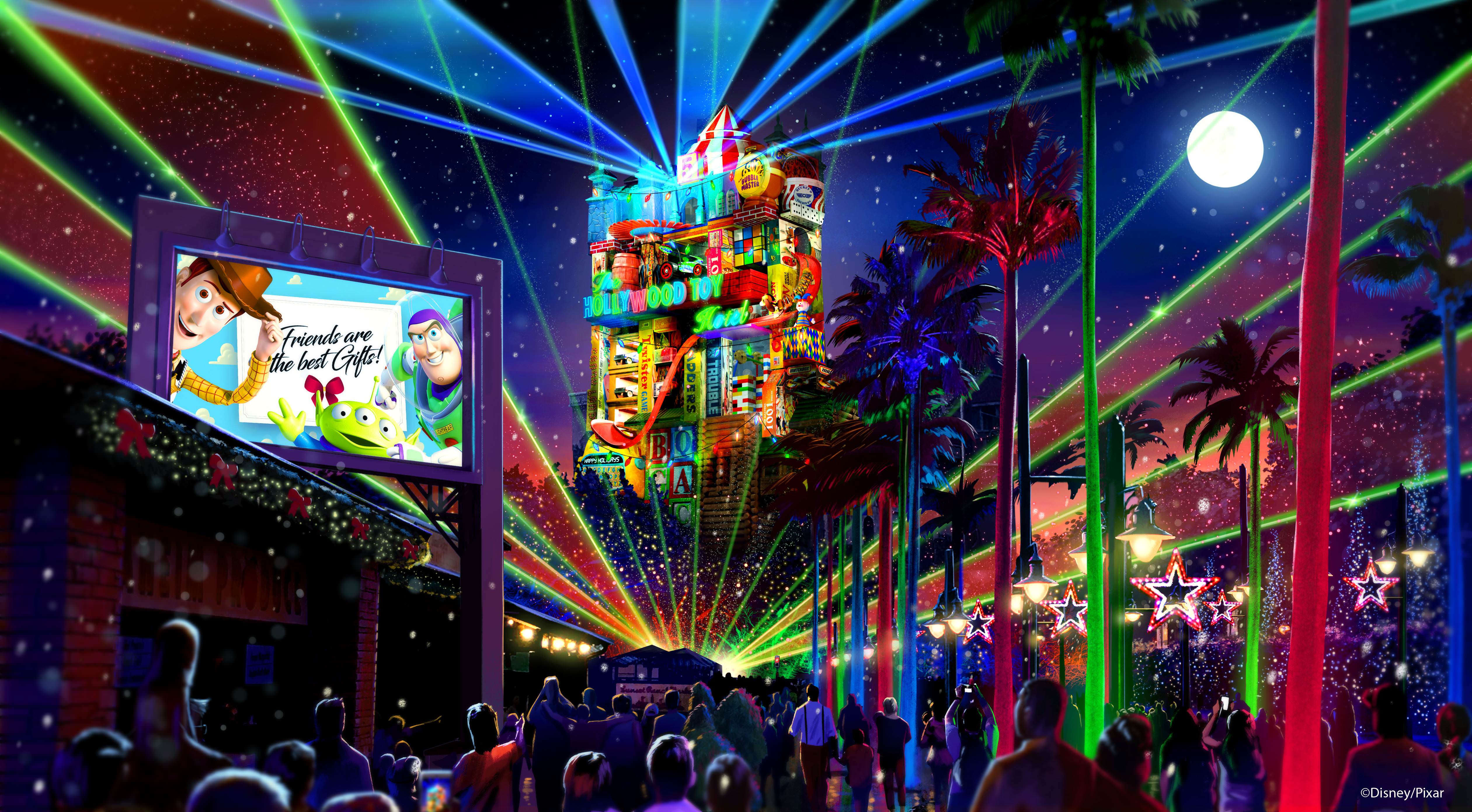 Over at Disney’s Hollywood Studios, visitors can look forward to two new special treats in the form of Sunset Seasons Greetings, a novel laser and special effects show that transforms the Sunset Boulevard area into a winter wonderland, and Holiday Cheer at Toy Story Land, with a full Christmas makeover for Andy’s back yard in this all-new area of the park. And there will also be the return of the Jingle Bells, Jingle BAM! fireworks and projections show at the end of the night.

If Magic Kingdom and the Studios both look spectacular in their festive finery, we always think Epcot takes some beating, with wonderful decorations and special events around the World Showcase section, culminating in the thrice-nightly Candlelight Processional, a truly stunning traditional concert featuring a 50-piece orchestra, massed choir (including the superb Voices of Liberty) and a special celebrity guest narrator for the Christmas Story. It’s a Disney signature event and you simply mustn’t miss it. In fact, you can start planning for it now! 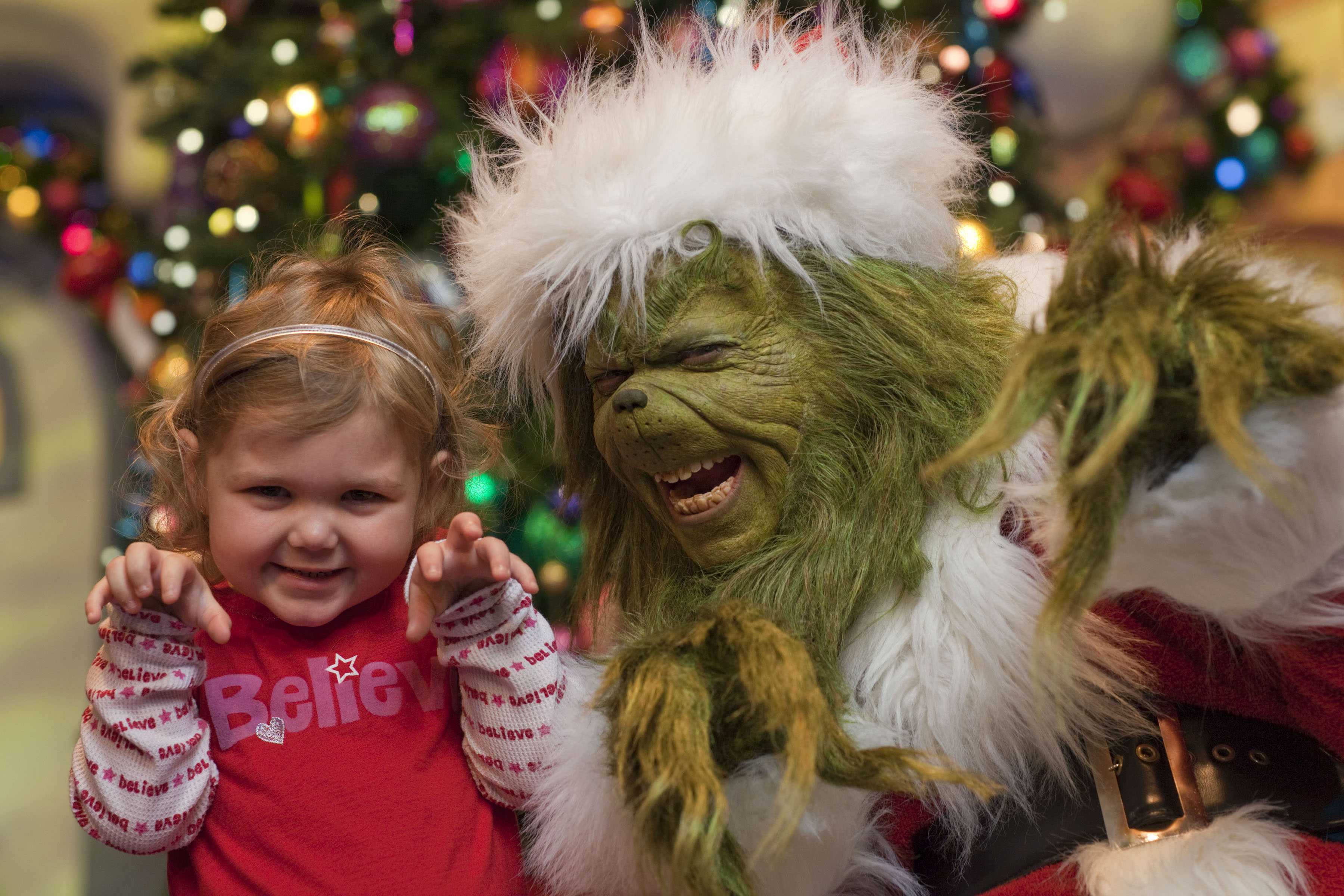 There’s no shortage of Christmas spirit over at the other big Orlando resort destination, where their seasonal celebrations kick off on November 17 and are featured in both parks, as well as the CityWalk district of shops, dining and entertainment.

The traditional event here is the fun Grinchmas overlay for Seuss Landing at the Islands of Adventure park, where things become distinctly grouchy with How The Grinch Stole Christmas show, as well as strolling carollers from Whoville around the land. Also at IoA, The Magic of Christmas at Hogwarts Castle will be back after becoming the sensation of the season last year. This special effects and projection show on the Hogwarts edifice lasts just seven minutes but is an absolute marvel of creative imagery and simply shouldn’t be missed. It is repeated every 20 minutes or so each evening, too, so there’s no excuse for not catching it! 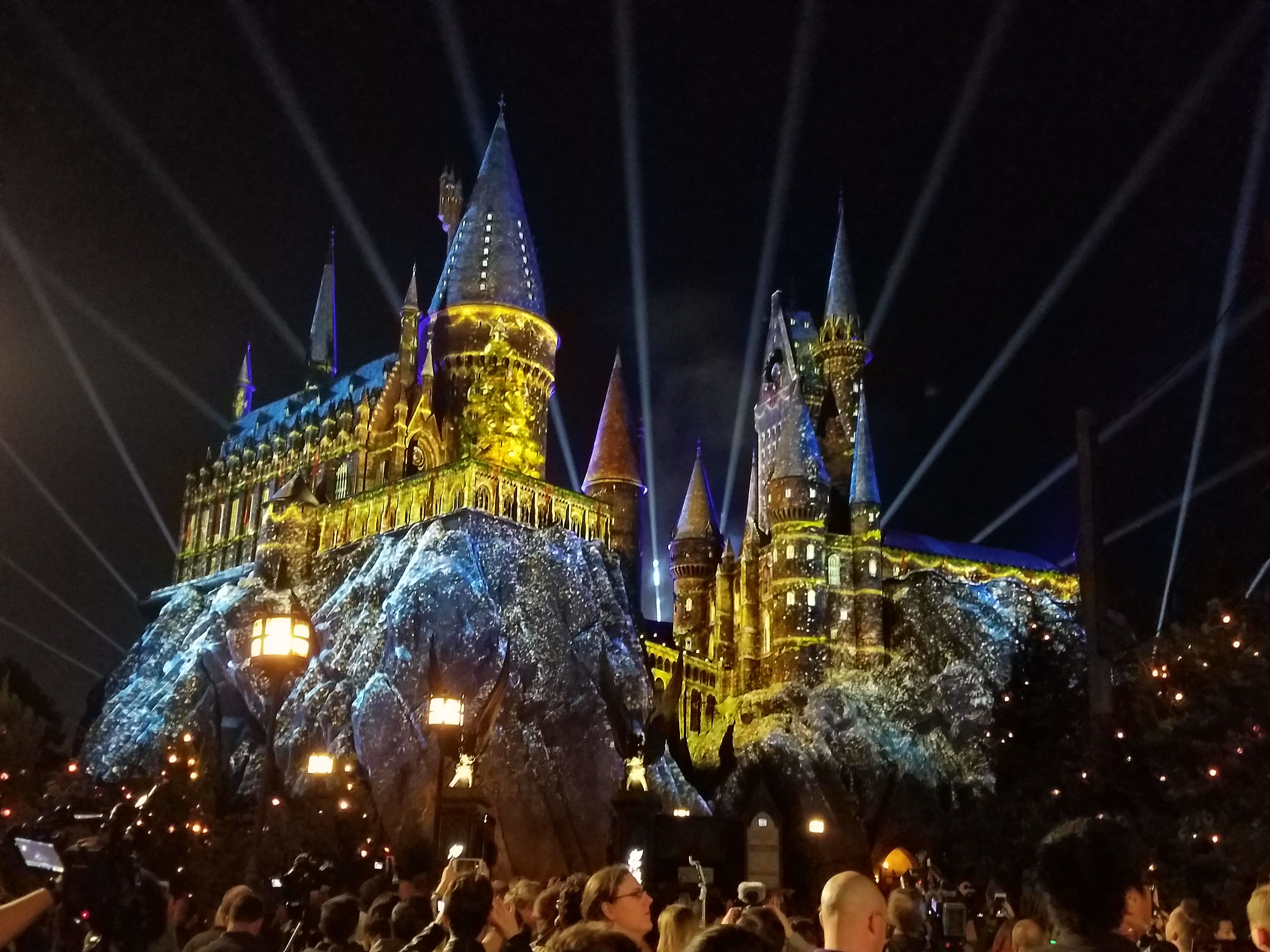 At Universal Studios, you need to watch out for the daily Universal’s Holiday Parade featuring Macy’s, which is their signature headline event, a 25-minute celebration of characters, giant balloons and Santa Claus (of course), all with a wonderfully catchy soundtrack. Head over to the Wizarding World of Harry Potter: Diagon Alley and you can also catch the special Christmas performances of Celestina Warbeck and the Banshees, amid a fitting seasonal makeover for this part of the Potter-verse.

While we enjoy the full Christmas transformation of this park as much (if not more) than all the others, SeaWorld has yet to announce any details of this year’s holiday season, although we expect it to be very similar to recent years, when the whole park comes alive with festive finery and special shows. Stay tuned for more here! 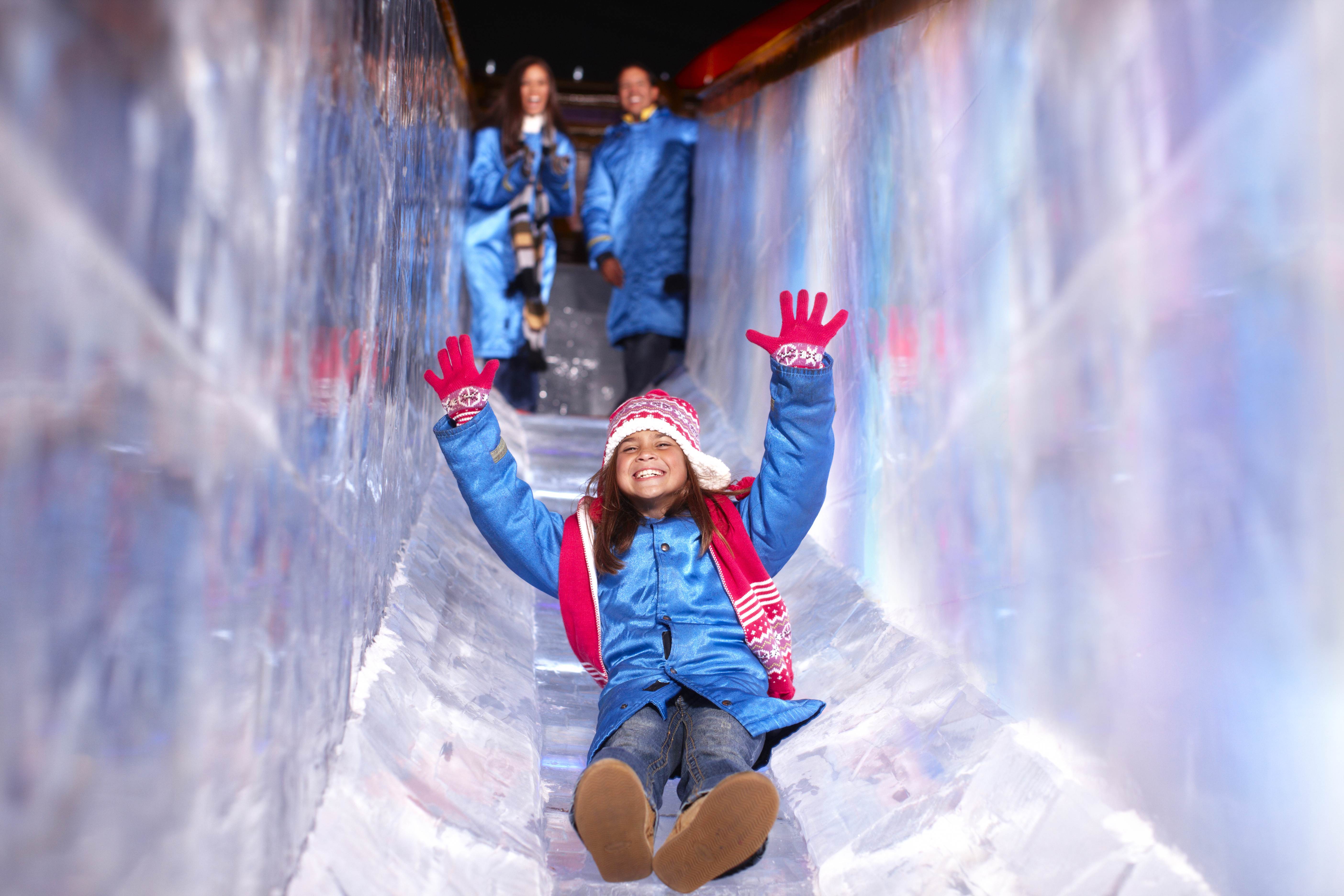 If there’s one thing we always tell people to make time for each December it is this feature-packed resort just outside Walt Disney World, where the whole indoor setting is filled with Yuletide splendour. And the resort was in top form last week when they unveiled the big theme for the annual ICE! presentation at the heart of their Alpine Village. In previous years we have seen the likes of Charlie Brown, Shrek and Frosty the Snowman take centre stage, while last year’s production was Christmas Around the World.

This year’s event will be different again as the theme will be taken entirely from the classic film, A Christmas Story, hence the amazing icy creation (with around 2 million pounds of ice!) will feature different scenes from the 1983 movie that introduced the world to Ralphie and his dreams of a Red Ryder BB gun. It promises to bring another fresh take to this sub-zero world, complete with its ice slides and larger-than-life sculptures.

Look out, also, for a new character breakfast with The Elf on the Shelf and a dazzling new light show, Dreams of Christmas, set around the 60ft Christmas tree in the main auditorium, as well as traditional favourites like Snow Tubing, Santa’s Snowball Throw and the superb Cirque Dreams Unwrapped show. It is a HUGE programme of seasonal excitement and one of Orlando’s finest.

So there you are, a quick look ahead to this year’s festive season, and, more importantly, the cue to start your planning and – in all seriousness – make some bookings, as these events DO sell out at peak periods. Get cracking, now…!

Want to know more about Christmas and the holiday season in Orlando? Come and ask your questions – or tell us your experiences – on the ATD forums!