2019 is the year to visit, as the centre celebrates half a century of space flight since that first Apollo mission lifted off.

On July 16, 1969, Apollo 11 made its historic flight to the moon, rocketing astronauts Neil Armstrong, Buzz Aldrin and Michael Collins toward their now-famous first moonwalk and Armstrong’s immortal words, “It’s one small step for a man, one giant leap for mankind.”

Fifty years later, Kennedy Space Center Visitor Complex celebrates The Year of Apollo, with several refurbishments and enhancements around the complex, many of which highlight the importance of that mission, and how it influenced the state of space exploration today. 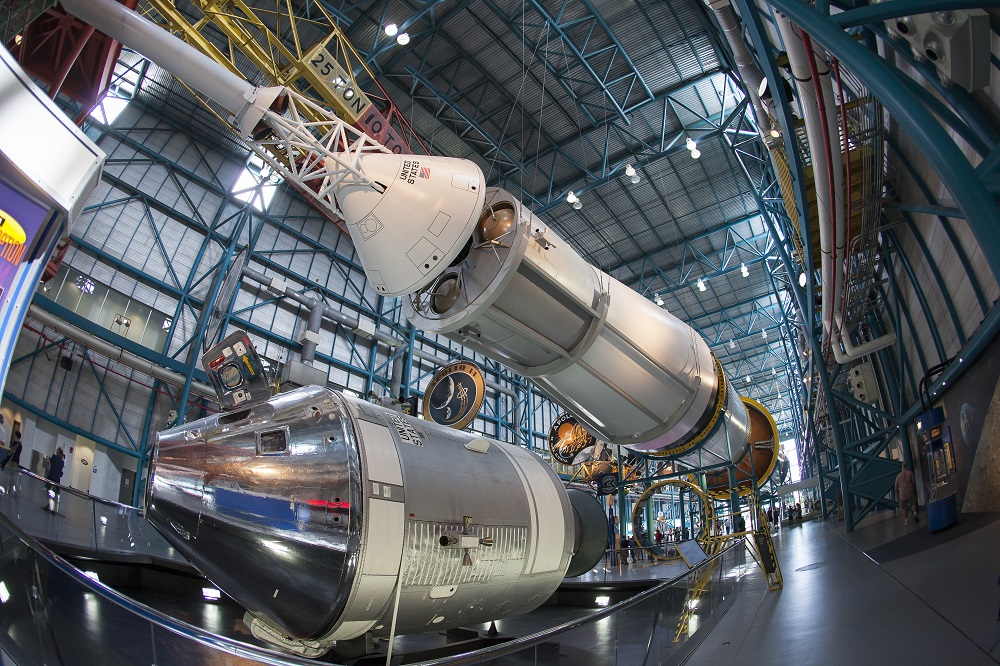 Much of the focus is on the spectacular Apollo/Saturn V Center, a major stop along the must-do bus tour. It will be completely renovated, with enhanced technology and interactive exhibits filled with fascinating and informative tidbits about the Apollo missions.

Among the most dramatic upgrades will be projection mapping on the side of the massive Saturn V rocket, with authentic historical footage of the moon landing. These enhancements will ‘launch’ with a grand opening on July 15, and be fully operational for the 50th anniversary of Apollo 11’s lift-off.

A recreation of a 1969 living room and a neighborhood bar will be constructed at the entrance to the Saturn V Center’s Lunar Theater, where visitors can experience the televised moon landing as if from their own home or from their local. The Astrovan that transported the astronauts to the launch platform will be on display here, too.

Although most aspects of the lunar launch and return are well-known, the 50-year celebration will look at some lesser-known aspects as well, including a Fisher Pen exhibit showcasing the ballpoint pen that was specially designed for use in a weightless environment and used by Apollo astronauts, starting in 1967, at the astoundingly low cost of just $6 each, plus a Moon Tree garden visitors can walk through, created from seedlings of trees that were on various missions.

Other enhancements include upgrades to the Touch the Moon exhibit; a closer look at the Command and Service Module; an interactive photomosaic display; more artefacts on display; plus new content, audio visuals and upgrades to existing displays. 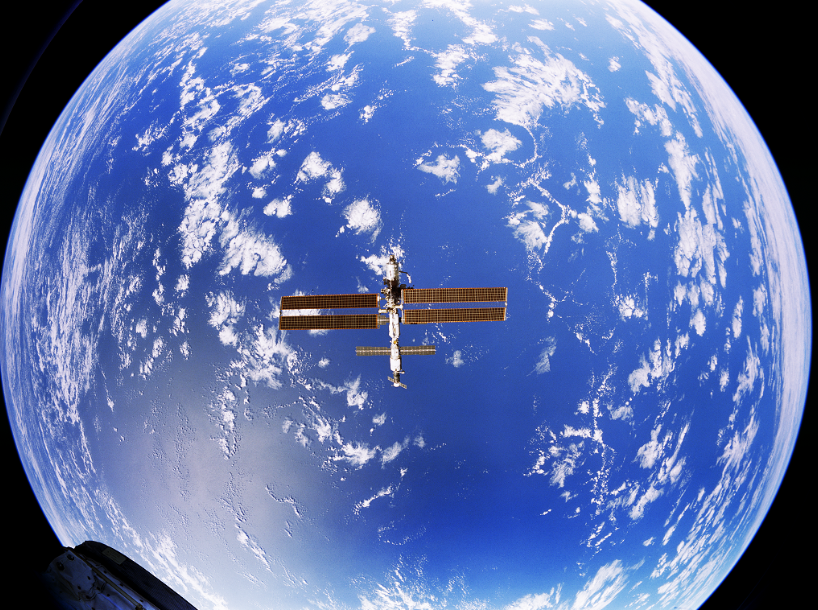 Not all moments in the quest for space were exhilarating or joyful, of course. Eva 23, a new documentary shown in the Heroes and Legends building at the Visitor Complex, tells the terrifying story of Italian astronaut Luca Parmitano’s brush with death during a spacewalk at the International Space Station, and how his fellow astronaut, Chris Cassidy, worked with the ISS crew and the ground team in Houston to save Parmitano’s life.

And while you’re revelling in the glories human-kind has achieved, make sure you visit the IMAX theatre and take in both Journey To Space 3D, which focuses on NASA’s past accomplishments and future plans, and is narrated by Sir Patrick Stewart, plus the new Touch the Stars: The Journey Has Begun 3D, produced by Afterglow Studios and Lockheed Martin, which explores our solar system neighbours as NASA’s robotic spacecraft captures images of the sun, the moon, and the planets, with a clarity never seen before.

No visit to Kennedy Space Center is complete without an hour or two spent in the magnificent Space Shuttle Atlantis exhibit, where the star of the show is, of course, Atlantis, one of the three surviving shuttles from the 30-year shuttle programme. Viewing an authentic vehicle that was a workhorse of the shuttle programme is incredibly emotional, and an experience you will never forget. You can even ‘take a ride’ on a shuttle at the Shuttle Launch Experience—and we highly recommend that you do! 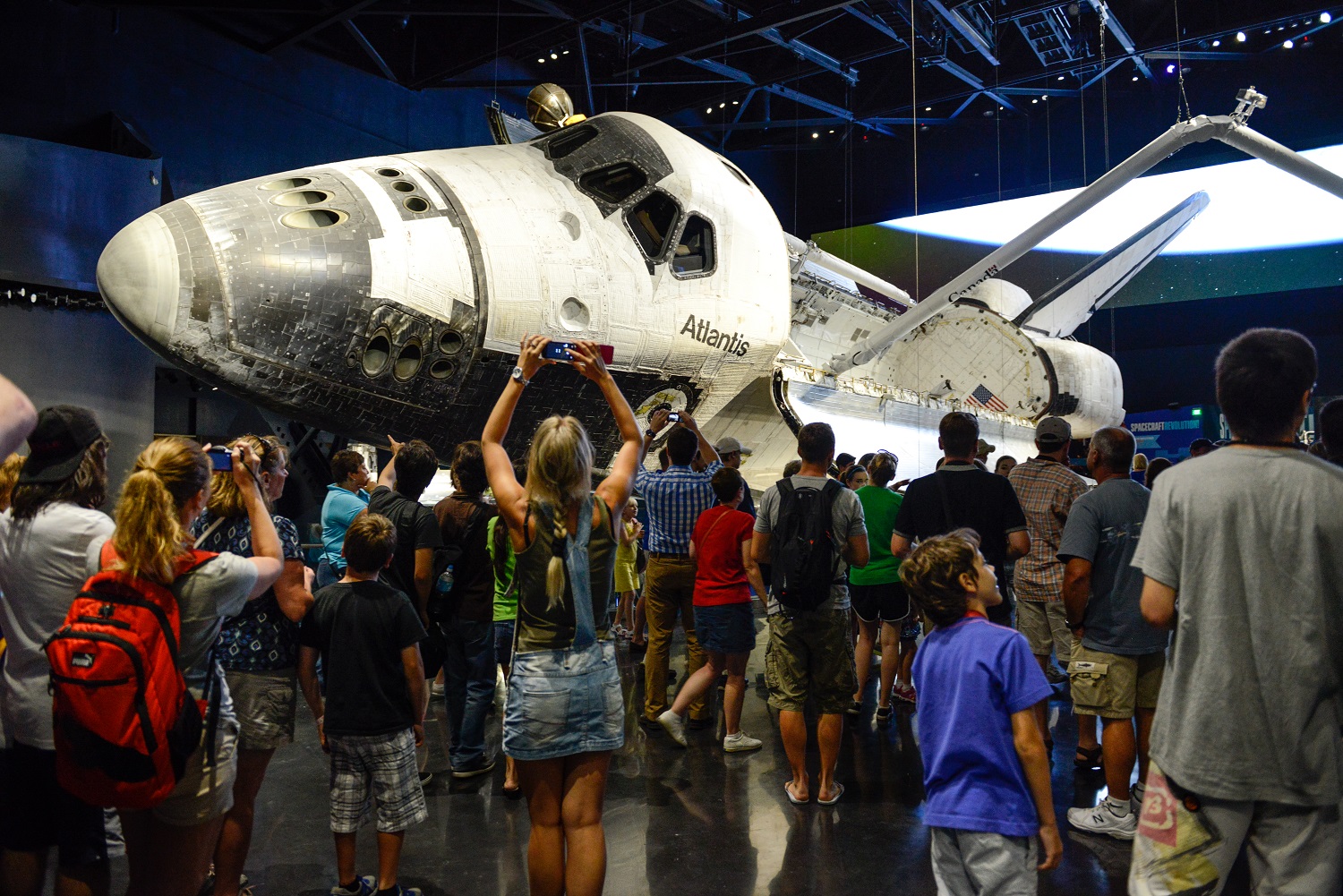 The Year of Apollo will also focus on the key dates around the Apollo 11 mission. Speakers and astronauts from those early decades will make appearances throughout July, and July 16 will be a full day of special celebrations at Visitor Complex, with highlights that include the Apollo 11 Historic Launch Flashback/50 Years Later, that goes through the entire launch sequence as-it-happened (in real time) in 1969. Susan remembers the day well; the whole family gathered at her grandparents’ house, and their black and white TV was on all day as Mission Control and newscaster Walter Cronkite’s narration inched the countdown toward lift-off. You may remember the day from coverage at school. This year, you can relive each tense—but thrilling—moment.

Then, on July 20, the Visitor Complex commemorates the actual moon-landing, with the One Giant Leap Celebration/50 Years Later. Can’t make either of those dates? On July 24 Welcome Home Apollo 11/50 Years Later will be one final hurrah, remembering the astonishing culmination of the entire process that took three men to the moon, then brought them safely home again.

Possibly the most exciting news around the 50th Anniversary is NASA’s dedication to continuing the path that started with the moon and promises to reach Mars. Learn about the quest for reusable rockets; NASA’s partnership with companies such as SpaceX, the United Launch Alliance, and Boeing; and the journey toward space exploration in vessels that will launch from American soil once more. 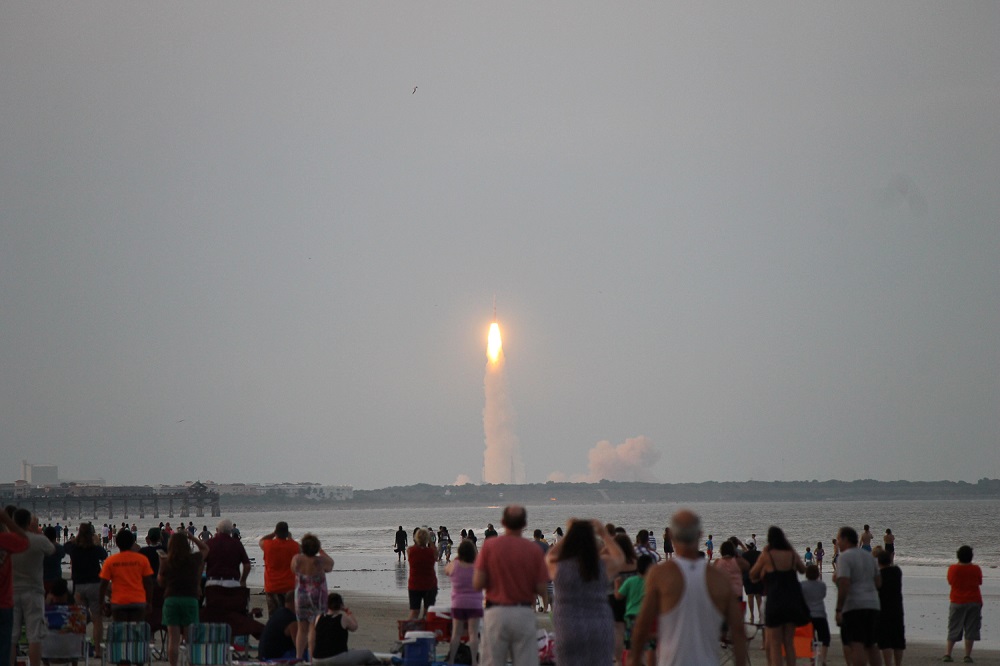 Visitors who want to take home a special remembrance of The Year of Apollo can purchase a custom designed 50th Anniversary coin struck by the U.S. Mint, light enough to add no extra weight to your luggage but special enough to become a unique collectable.

If you’re visiting on June 8, be sure to pop into the Space Shop gift shop and pick up a copy of the Picturing Apollo 11: Rare Views and Undiscovered Moments commemorative book, filled with ‘new and rarely seen views of the people, places, and events involved in the first Moon landing.’ Authors J.L. Pickering and John Bisney will be on hand between 12.30pm and 3.30pm to autograph your book.

Kennedy Space Center certainly is “go for launch” this year, and with so much on offer, we think “go for lunch” is worthwhile advice, as well!

When was the last time you visited Kennedy Space Center? Maybe it’s time to add it to your holiday plans!

Join us on Attraction Tickets Direct’s discussion forums to talk about all things Orlando!