Orlando , Expert View Column
By ATD’s Florida Experts, Susan and Simon Veness
Festival of the Lion King? Legendary. La Nouba or Blue Man Group? You’ve seen each of them three times. IllumiNations? You plan your holiday around it. But what about the smaller shows? The ones you rush past on your way to something else. Let’s show them a little love.

With the exception of the poor soul assigned to lead guests in the Hokey Cokey and the Chicken Dance while the area that was once Pleasure Island was still sorting itself out, there are few shows in Orlando’s parks that aren’t worth seeing. The entertainment industry in Central Florida is huge, drawing talent from all over the world, and scoring a role in a major theme park production is like hitting the jackpot.

But the smaller shows are no less enthusiastic, and often they’re more entertaining for their unscripted nature and their ability to go completely off-message. Here are 8 of the lesser-attended shows you should be making time for during your next Orlando holiday:

Yehaa Bob Jackson: You’ll find “piano man” Bob in the River Roost Lounge at Disney’s Port Orleans Riverside, Wednesday through Saturday from 8.30pm until 10.30pm.  Dressed as a ‘ragtime man’, he sings and plays the piano, but that hardly describes what makes his show popular with those in-the-know.

Watching Bob play is like watching a high-speed car chase; it’s rollicking, it’s manic, and you can’t look away. Even his piano gets in on the action, with some surprising moves of its own. Bob’s shows are heavily interactive, so be ready to sing, shout, and get up on your feet. You may even be the star of a song, if you’re willing. 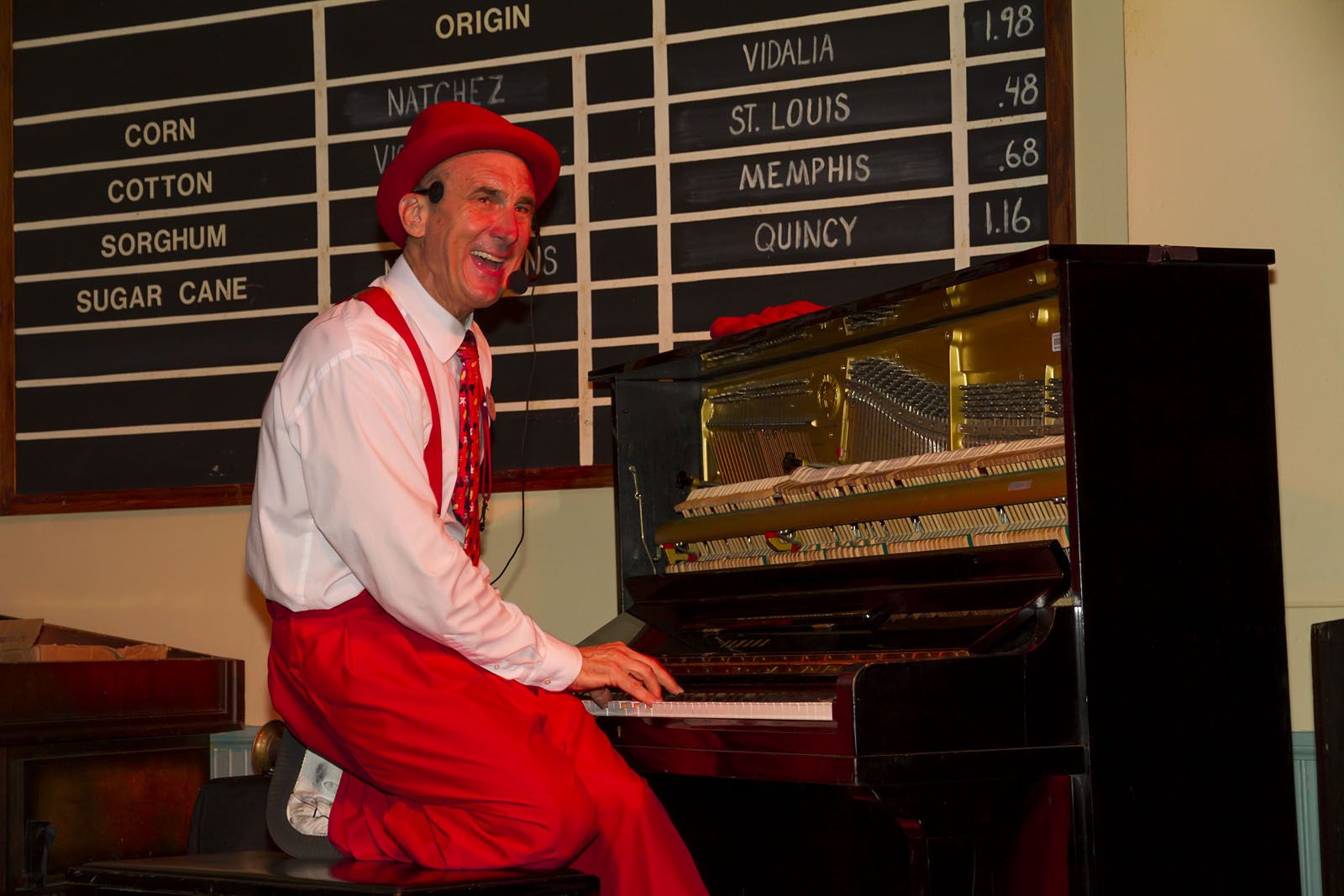 Frog Choir in Hogsmeade at Islands of Adventure: Students from each of the Hogwarts houses—Slytherin, Hufflepuff, Ravenclaw and Gryffindor—join with two of the most massive frogs you’ve ever seen in this energetic a cappella stage show that recreates the Hogwarts Welcoming Feast scene in the movie, Harry Potter and the Goblet of Fire.

As in the movie, the Frog Choir in Hogsmeade is part of a celebration of the opening of the Triwizard Games, and includes performances by the Beauxbatons Academy of Magic and by the Durmstrang Institute, reminiscent of their arrivals at Hogwarts prior to the tournament.  What makes it so special? The inclusion of the baritone frogs is hilarious, and takes more than a bit of skill to pull off! 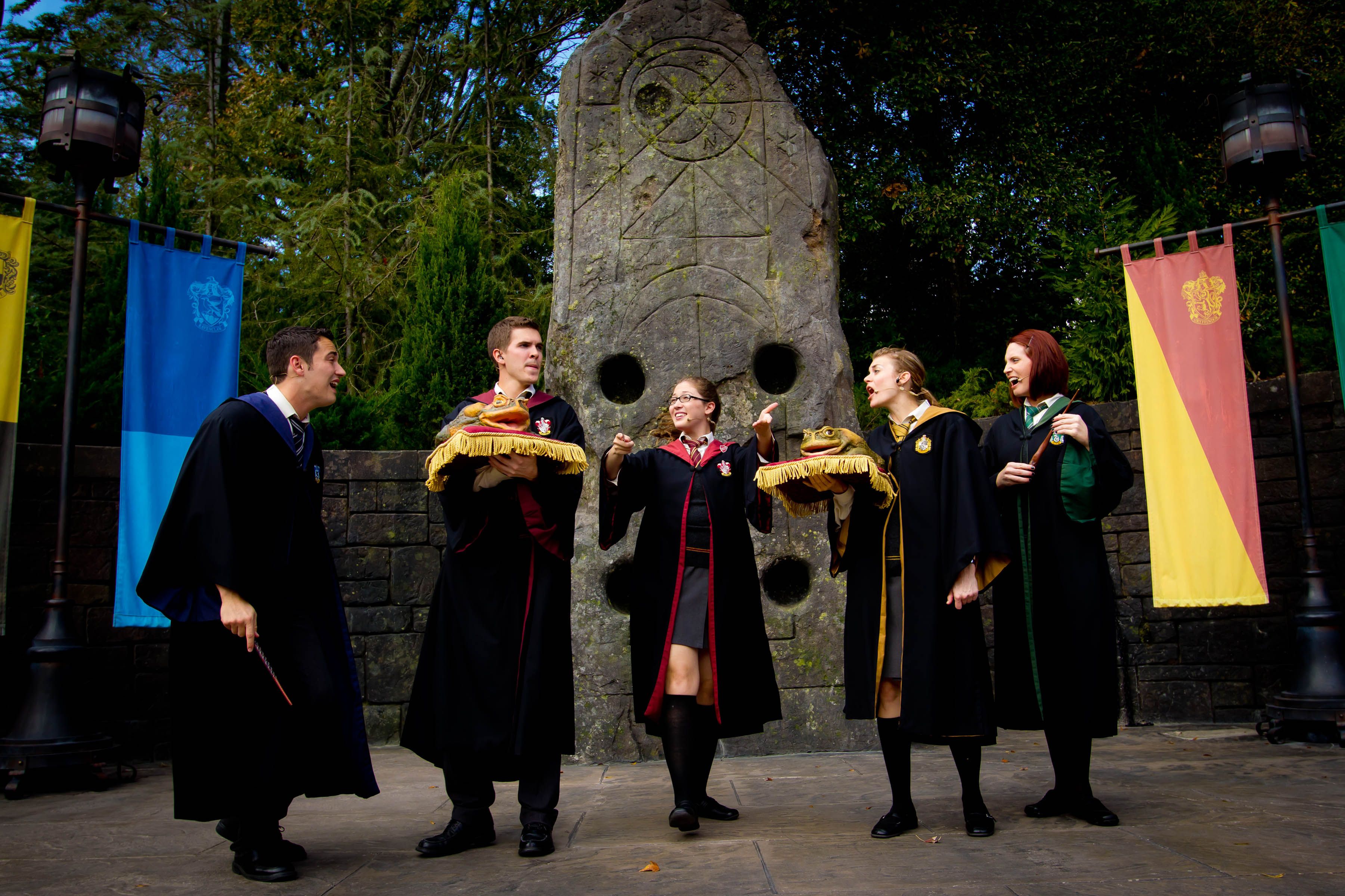 Ollivanders in Diagon Alley at Universal Studios: Yes, it’s a blatant opportunity to sell expensive Harry Potter wands. Yes, there’s another Ollivanders in Hogsmeade at Islands of Adventure. But Diagon Alley’s Ollivanders is much easier to get into, and the show is utterly charming.

The main shop leads back to a smaller shop where the show takes place, and if there are kids in the room with you, they are the likely candidates for a short ‘the wand chooses the wizard’ experience, though adults can be chosen, too. It’s all very quiet and mysterious, with a wizard who takes their role as shopkeeper very, very seriously. And that’s half the fun when a new ‘wizard’ arrives for their first wand. It all goes wrong, of course, but in the end…it’s magic! 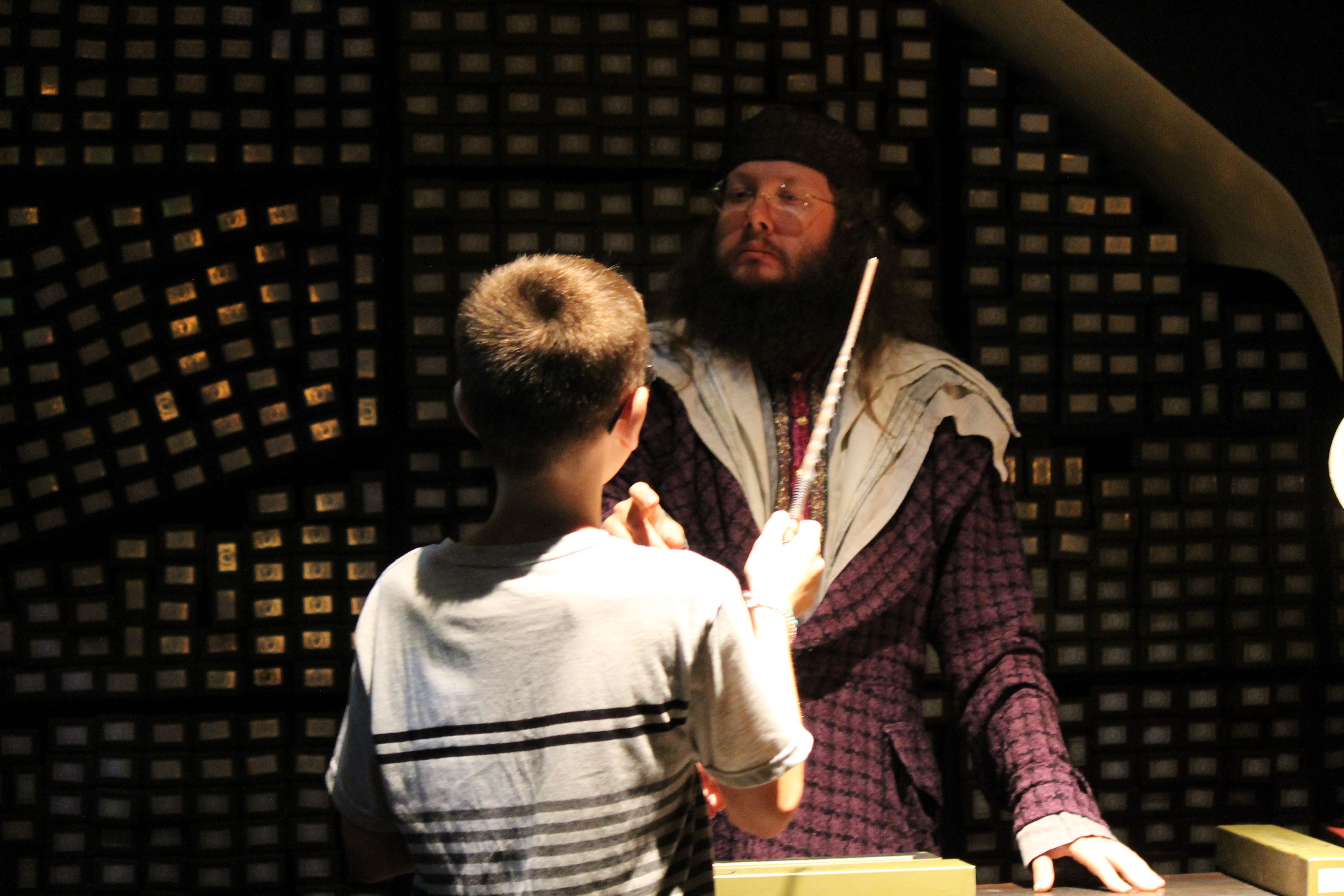 JAMMitors at Epcot: If you’re a drummer and you live in Orlando, you’re practically guaranteed work. There are loads of street entertainers in each of the parks, mainly based around banging on something. JAMMitors have been around for quite a while, and their show is slick, inviting, and a crowd-pleaser for those who stop and listen.

Jedi Training: Trials of the Temples at Disney’s Hollywood Studios: If you have young Padawans, you probably know about this show, and you probably have videos all over your social media to prove it. We’ll admit it’s aimed mainly at kids but, just as working with animals is unpredictable, so is working with children.

From the youngsters who simply cannot follow directions to the Jedi wannabes who take every moment seriously; from the pint-sized fighters slashing at Darth Vader like there’s no tomorrow, to the rogue lightsabers that simply fall apart in their user’s hands, it’s a delightful diversion in an otherwise scripted day. You never know what’s going to happen, but when it does, it’s usually funny! 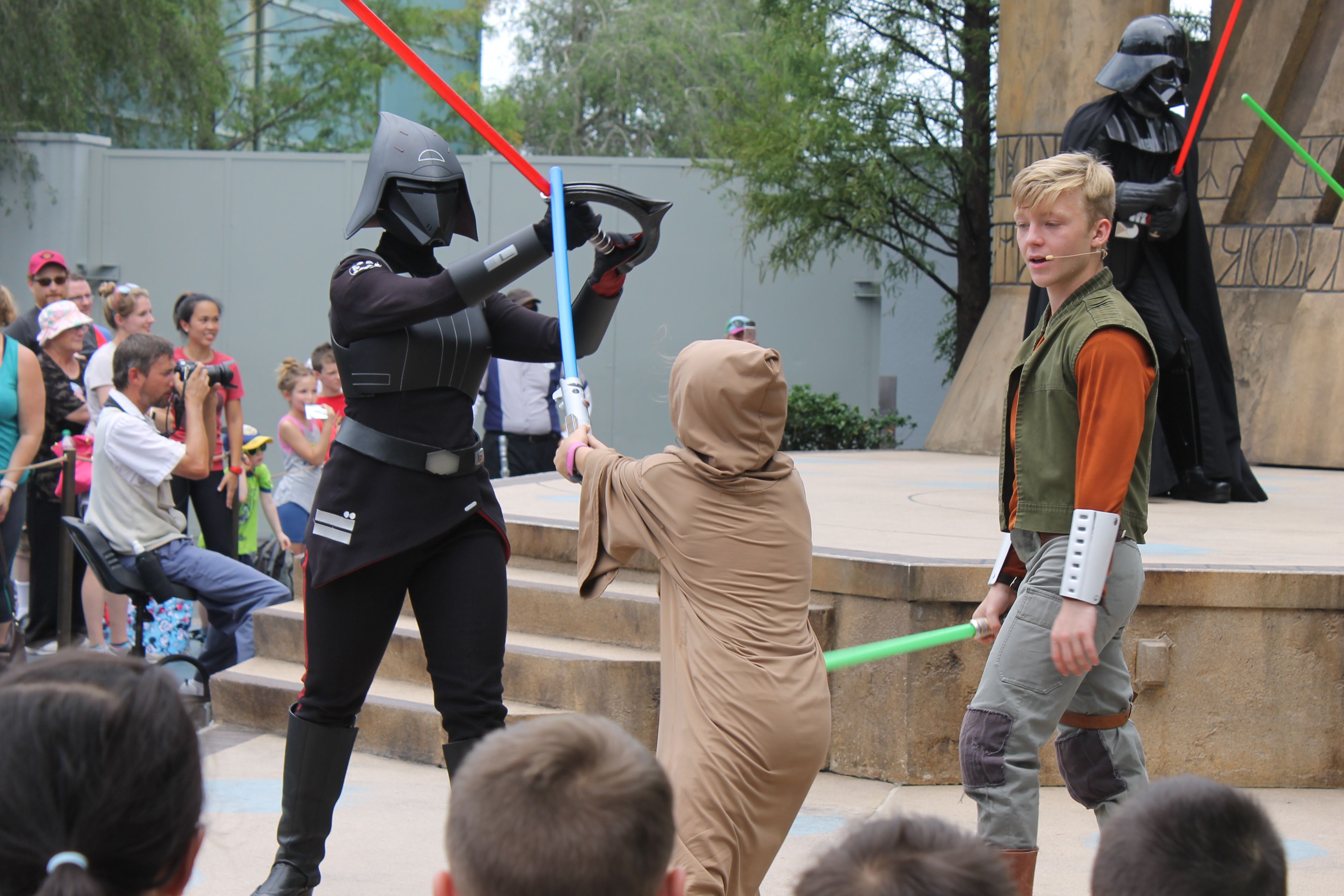 Gringott’s Money Exchange in Diagon Alley at Universal Studios: This one gets so little love it’s a wonder it’s still there. You have probably walked right past it, not knowing what it was. Maybe you ventured inside, and found an almost tomb-like atmosphere, with a goblin sitting at his desk high above you, and a human standing next to his desk, ready to take your cash. No one wants to be the first to speak up and that’s a real shame, because when “Sir” hears your questions or comments, he’s got a lot to say. And most of it is in keeping with his rather annoyed attitude. Be the brave one and ask him what he’s up to. Be the smart-aleck and ask him how old he is.  We dare you.

You don’t have to change any real money for Gringott’s bank notes, though you certainly can, and they’ll be accepted in both Wizarding World areas. But who’s kidding who? You’re going to do what everyone does and keep it as a souvenir. It’s free to have a little banter with Sir, and it can be downright amusing, too. All it costs to see this remarkably interactive goblin is a few minutes of your time. 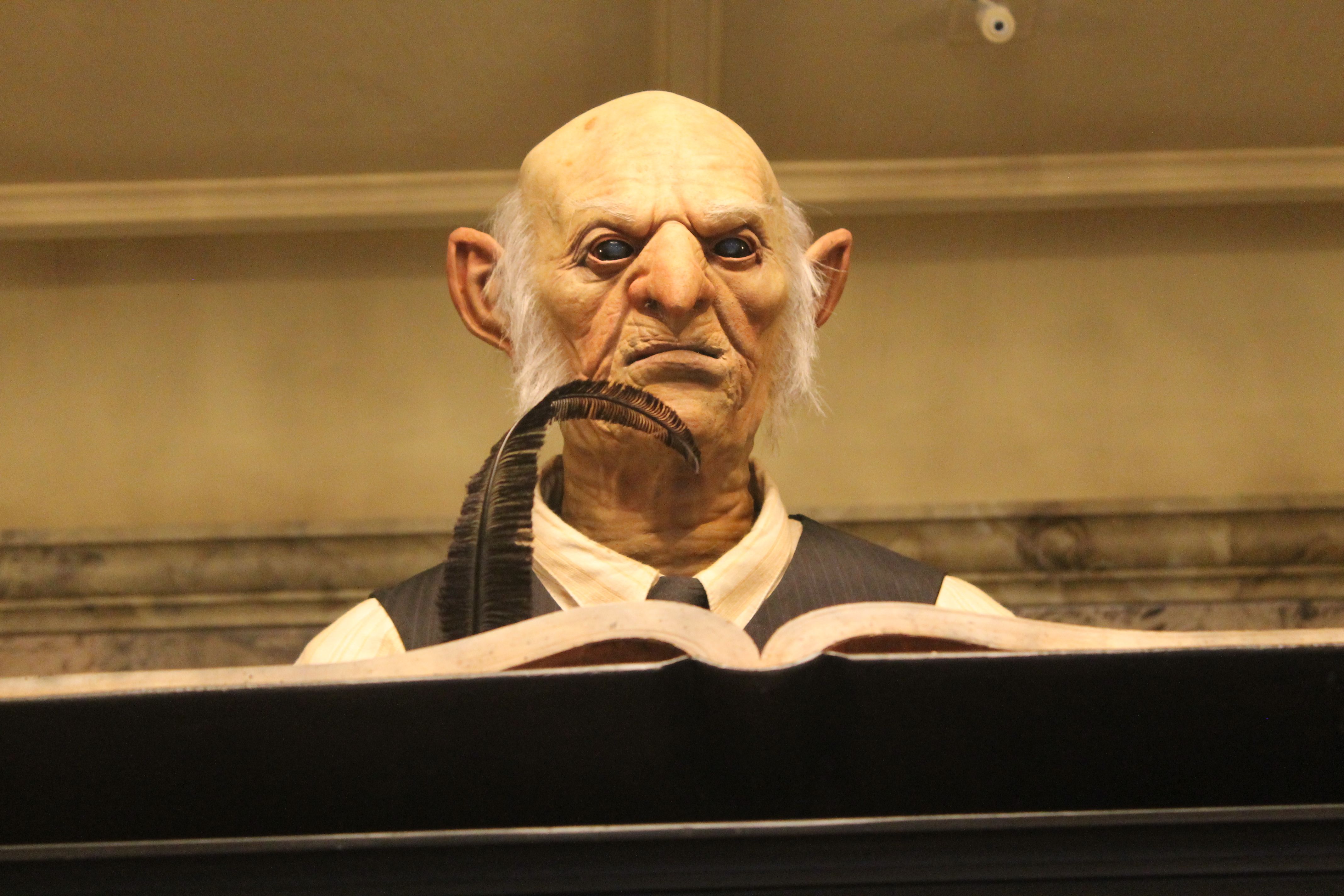 Tam Tam Drummers of Harambe in the Africa section of Disney’s Animal Kingdom: Yup, we’ve got drummers again. That said, this group is nothing like most drumming acts, and they’ve worked hard to earn your attention. This is one high-energy explosion of African music, dancing, and drumming. If you get into the spirit of it, you may be recruited with several other guests to form a dance line and learn some of the easy steps (can you tap your foot and clap? Can you wave your hands in the air and move your hips at the same time? You’re hired!). Or, if you’re a real show-off, it could get far more complicated than that.

Casey’s Corner Pianist at Casey’s Corner in Disney’s Magic Kingdom: Main Street USA is all about nostalgia, and Casey’s plays into that beautifully, with baseball, hot dogs and the ragtime jazz sounds of a pianist in a candy-stripe suit. He plays his heart out, and you’ll be completely enchanted.

It’s a slice of Americana, right out of a Norman Rockwell painting and straight into your heart. He doesn’t get the attention given to a stage performer or a Disney character. He probably doesn’t get paid a lot, either. But there are few things more delightful than a good old fashioned ice cream soda sipped at a table under a sun umbrella, with a view of Cinderella Castle and the joyful sounds of yesteryear. It’s a humble show, but it’s truly Disney enchantment at its finest. 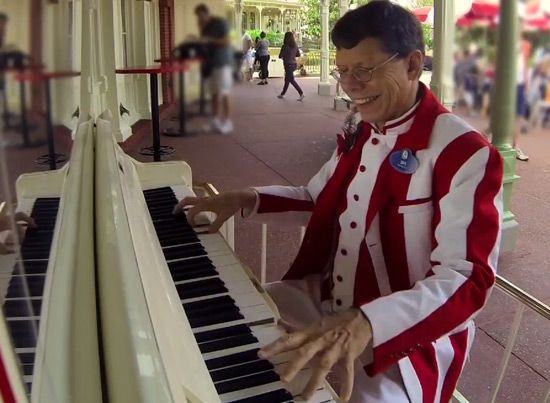 Which small-scale shows have you discovered in the parks? Share your thoughts with us on Attraction Tickets Direct’s discussion forums!