Celebration Village and  Christmas Town Village, located near Busch Gardens’ Gwazi roller coaster, are holiday central, with all the sights, sounds, treats, and treasures to ring in the season of giving. But you’ll have to do a bit of giving yourself first, as Christmas Town is a separately ticketed evening event, from 6pm-11pm on 18 select nights from 29 November through 23 December.
Reindeer Games are being assembled in Christmas Town Village, photo backdrops are going up, and the festive Jingle Bell Express children’s train will delight youngsters, while the nearby Christmas Town Sing-Along Train should prove fun for all the family.
The rest of the park will get in on the festivities too, with shopping, dining, and live entertainment. Crown Colony restaurant in the Egypt section of the park will provide an outdoor setting for the choreographed music-and-lights show, Carol of the Bells. Marrakech Theater in Morocco will play host to the Hallelujah Choir, and new for 2013 is Christmas Time Terrace over in the Jungala area, with its enormous Christmas tree serving as the backdrop for the Christmas Time Terrace Light Show. Then, the new Mistletoe Memories garden walk sets just the right mood for a bit of romantic holiday entertainment.
Two Busch Gardens favourites, ICEploration and Madagascar Live! Operation: Vacation are undergoing a seasonal make-over and will return as Angels of Peace: A Christmas Journey on Ice and Madagascar Live! Operation: Christmas Vacation. Elmo and his Sesame Street pals delight youngsters with Elmo’s Christmas Wish, located in Sesame Street Safari of Fun section of the park.
Special merchandise, food, and drink are available at nearly every shop and restaurant, with seasonal selections such as roast beef, ham, and turkey; eggnog and hot chocolate; mini-pies; fresh-made sweets, cookies, and fudge; and, of course, Elf Munch. 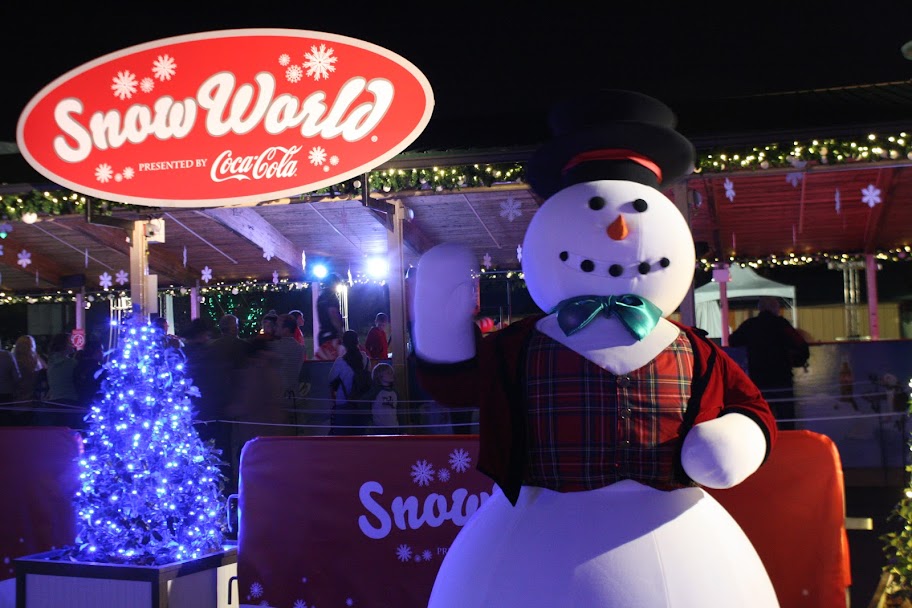 The must-not-miss experience will be the 15,000 square foot winter wonderland of SnowWorld Presented by Coca-Cola, bringing mountains of chilly fun to Florida in the form of snow slides, building snowmen, and the eternal childhood winter favourite, snowball throwing.
And what would the Season of Joy be without a visit with Santa, firmly ensconced in his North Pole setting? Mrs. Claus won’t be far away, and she will be welcoming guests in the new Holiday Hills section, a charming setting from a bye-gone era. And if a very special dinner is on the menu, guests can even sign up for Mrs. Claus’s Family Feast (ideally in advance).
We will be visiting Christmas Town in early December and will give you the full low-down on what’s up in a future blog.
But we’re not quite ready to leave Busch Gardens yet. Work continues on the hair-raising drop-tower, Falcon’s Fury, and if you’re visiting sometime soon you may see Fury’s sections ready and waiting for assembly in a fenced-in piece of property just off of McKinley Drive. The segments themselves don’t look too imposing…yet. But when you consider how many sections there are and you start mentally stacking them one on top of the other, don’t be surprised if a slight chill runs through your body. This one is going to be a real beast!

On the opposite coast, Kennedy Space Center’s popular Up-Close tour will continue to include a stop at the Vehicle Assembly Building (VAB), with the chance to see this enormous structure from inside, but it is possible tours will end on 31 December. The building will be undergoing a major remodel in preparation for accommodating next-generation rockets, and once that happens tours will no longer be offered. There is no firm date for the transition yet, and tours will occur on a day-by-day basis starting 1 January, 2014. If you are visiting Orlando any time before the end of the year and have an interest in going inside this historical building, make your booking for before New Year’s Day.
Thanksgiving Dining
In a previous blog about Thangsiving in Orlando we gave you the rundown of restaurants in Orlando offering Thanksgiving Dinner, now the resorts are starting to announce their offerings here are a few more to add to the line-up:
Resorts offering a buffet with traditional Thanksgiving fare include:
Rosen Shingle Creek Resort (Universal Blvd), Rosen Plaza (International Drive), and Rosen Center Resort (International Drive)
Loews Portofino Bay Resort’s Trattoria del Porto at Universal Orlando
Caribe Royale resort in Lake Buena Vista
Hemisphere at the Hyatt Regency Orland International Airport
Resorts with a la carte Thanksgiving dinners:
At Universal Orlando, Emeril’s Tchoup Chop and Islands Dining Room, both at the Loews Royal Pacific Resort; The Kitchen at the Hard Rock Hotel, Mama Della’s at Portofino Bay; and Emeril’s Orlando in CityWalk.
Specialty prix fixe Thanksgiving menus can be found at:
Seasons 52 on Sand Lake Road
Capital Grille on International Drive
David’s Club Bar and Grill at Hilton Orlando just off of International Drive
Norman’s at the Ritz-Carlton Grande Lakes
Columbia restaurant in Celebration
We’ll keep you up to date as more Thanksgiving locations are announced, but for now we’ll make a restaurant recommendation that’s perfect after a day at Kennedy Space Center.
Restaurant Recommendation: It’s a long drive out to the Space Coast, and it feels even longer coming back, so we’re recommending splitting up the journey at the fabulous Nona Blue, owned by Northern Ireland native and pro golfer Graeme McDowell. The restaurant offers a “Shareable” menu (ok, so it would be called the Starters or Appetizer menu in any other restaurant, but Sharables sounds nice and friendly, doesn’t it?) with portions designed ‘for the table’, but like many Orlando area restaurants regular portion sizes can be large. If you’re not in the mood for a big meal, drop in anyway and split something. We had the meat loaf (easily enough for two), but you’re not going to go wrong with anything at this fun, modern tavern with its upscale but casual atmosphere and welcoming service.
If you're headed to Orlando for Thanksgiving be sure to check out the Attraction Tickets Direct range of Orlando attraction tickets to purchase before you travel.