Yes, that’s right, this is now the place to come for an absolute five-star experience with an extensive range of American craft breweries, thanks to a special weekend series that SeaWorld is highlighting this month.

We had a ‘sneak peek’ at the event yesterday (November 1) during a special media preview, and we can confirm that this is something all beer aficionados will want to put on their calendar in future. The first Craft Beer Festival with Shamu and Co is definitely a new Orlando tradition that is likely to grow and grow, and it adds some excellent extra fun – and tastes – to the SeaWorld scene. 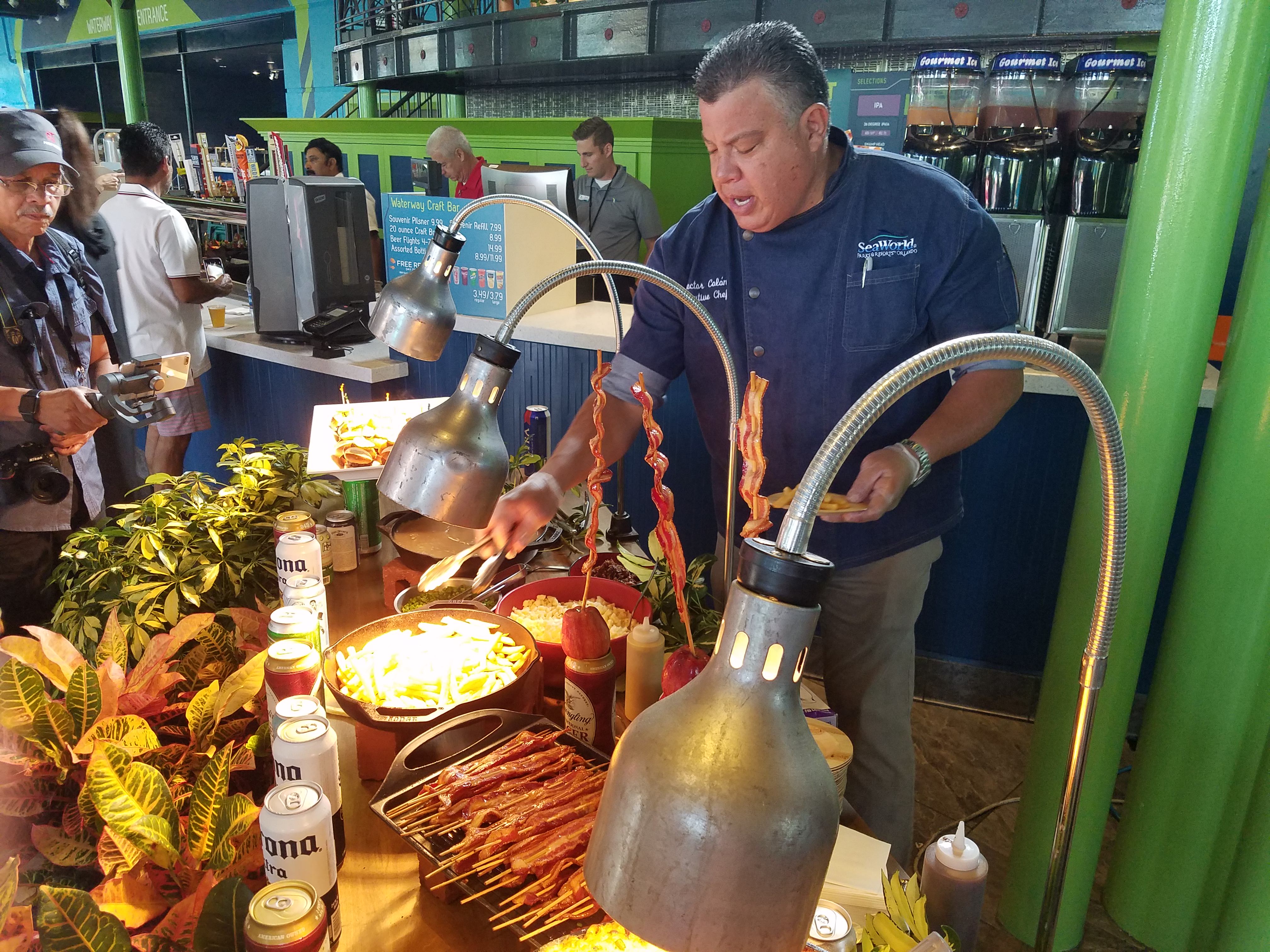 Or, as SeaWorld’s Executive Chef Hector Colon told us, “We’re going to make this a good, fun, family event, where you can go around the park, stop for some great tastes and then try some of the great beers we have put together. We’re going to have some fruit beers, some chocolate beers, some peanut butter beers and some beer floats, and it’s all going to happen over the next two weekends.”

It starts this weekend (November 3-4) and continues on November 10-11, and we think it is very much a trial event for something much bigger in future. So, get ready for something bigger, because this is a great way to enjoy all the exhibits and rides of the park – notably the hilarious thrills of the new Infinity Falls raft ride – while also benefitting from some classic bites and brews.

Because this isn’t just about the beer, as good and varied as it is. Alongside the 100-plus craft ales and ciders (yes, that’s right, more than one HUNDRED different tipples to topple!) there are also 21 purpose-created menu items to help soak up all that liquid. 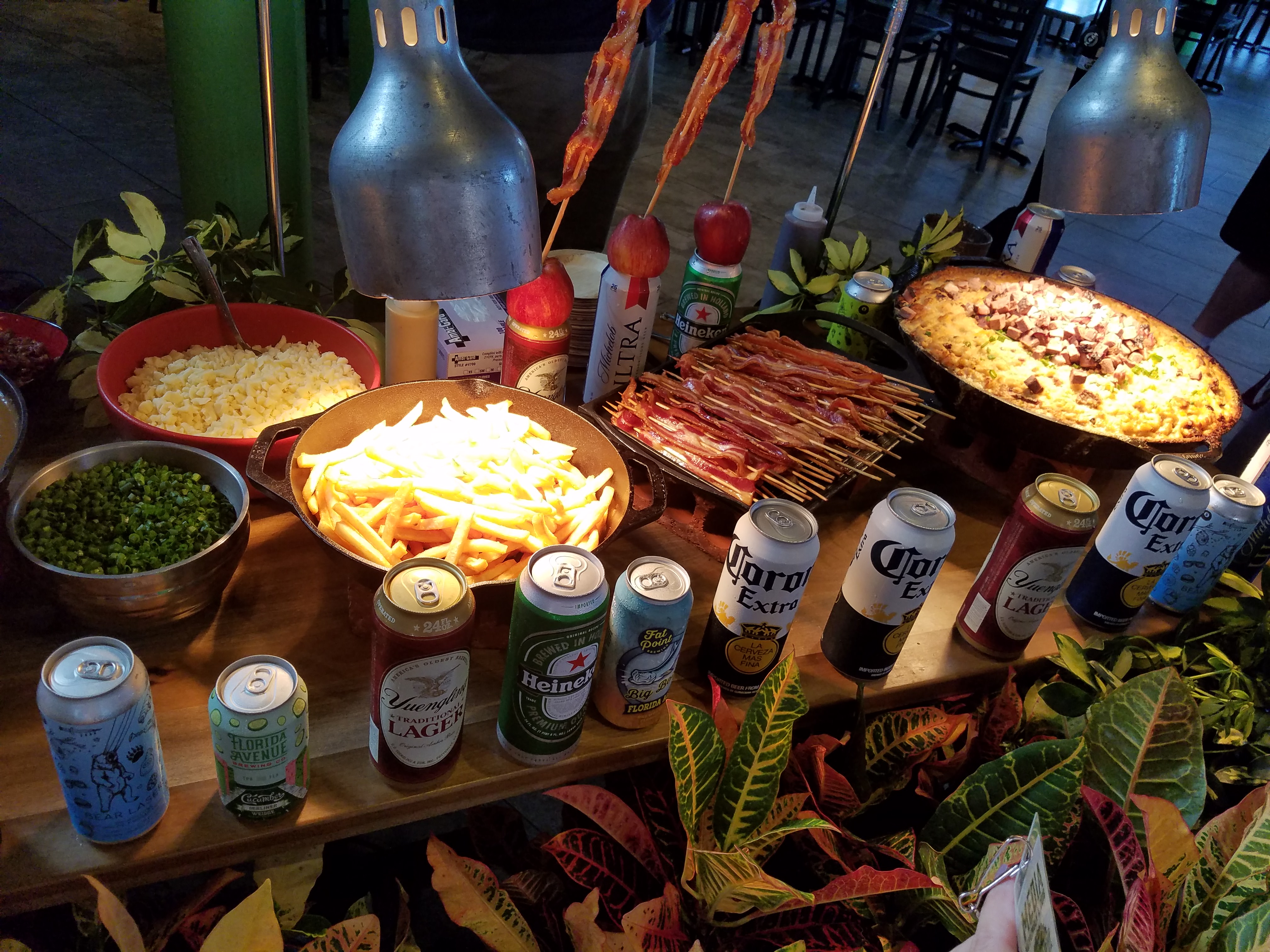 And it’s not just basic fodder, either. Oh no. There’s BBQ Brisket Mac and Cheese, a Bison Slider (served with Lager Bacon Onion Jam and Minorcan Mustard) and a Buffalo Burger Quesadilla that all have a distinct gourmet touch, while you can also try Beer Corn Fritters served with Sriracha Aioli and Candied Bacon Lollipops, which both go down extremely well in the Florida sun with a pint of something cold.

The more traditionally-minded might prefer a nice helping of Fish and Chips (from the Shark’s Treat Market near the epic roller-coaster Mako), Jumbo Chicken Wings or Chorizo Potato Skins, the latter two of which have a bit of a Latin flourish, while the Patio Bar at Mama’s Pretzel Kitchen has added an Infused Bacon Cheddar Pretzel just for the occasion. For those with a sweet tooth, there is a Nutella Pretzel that actually pairs well with the Keel and Curley Mango Hard Cider that’s also on offer there. 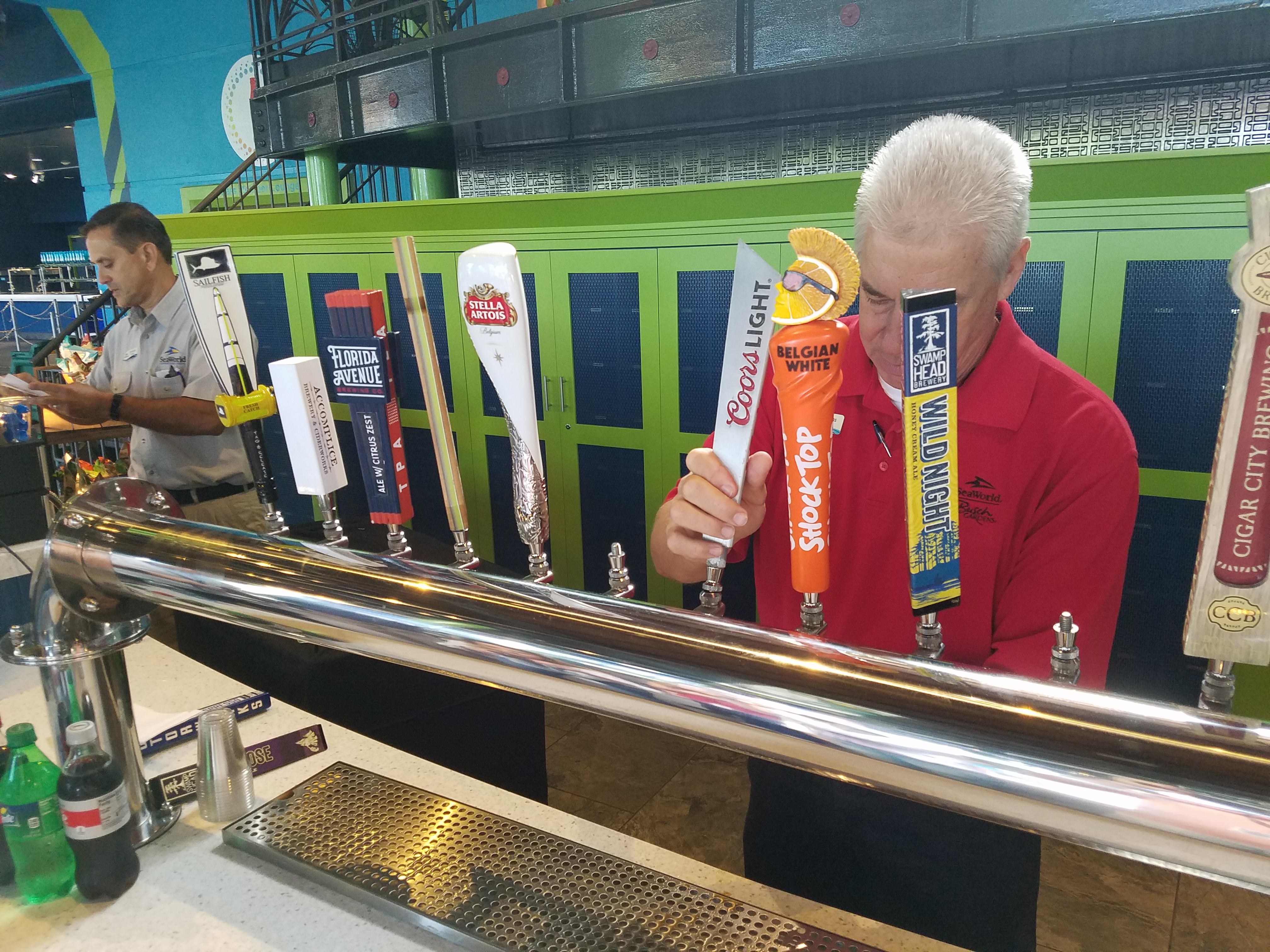 But you’re here for the beer, right? So let us give you just an appetite-whetting taste of what’s in store in this particular Festival. It’s pretty obvious you’re not going to be able to sample everything on offer – unless you’re looking for a one-way ticket to the nearest casualty ward – so you’re going to need a crash course on some of the excellent breweries that will be showcasing their wares here this month.

Some of the bigger players in America’s great craft beer movement are definitely in evidence, the likes of Sam Adams, New Belgium, Blue Moon and Sierra Nevada, and any of these will provide a satisfying mainstream taste, while trendy newer breweries such as Breckenridge (try their Vanilla Porter), Kona Brewing Co (the Wailua Wheat is as refreshing as they come) and Karbach (with an excellent Lemon & Ginger German-style Radler) are all well represented, too. 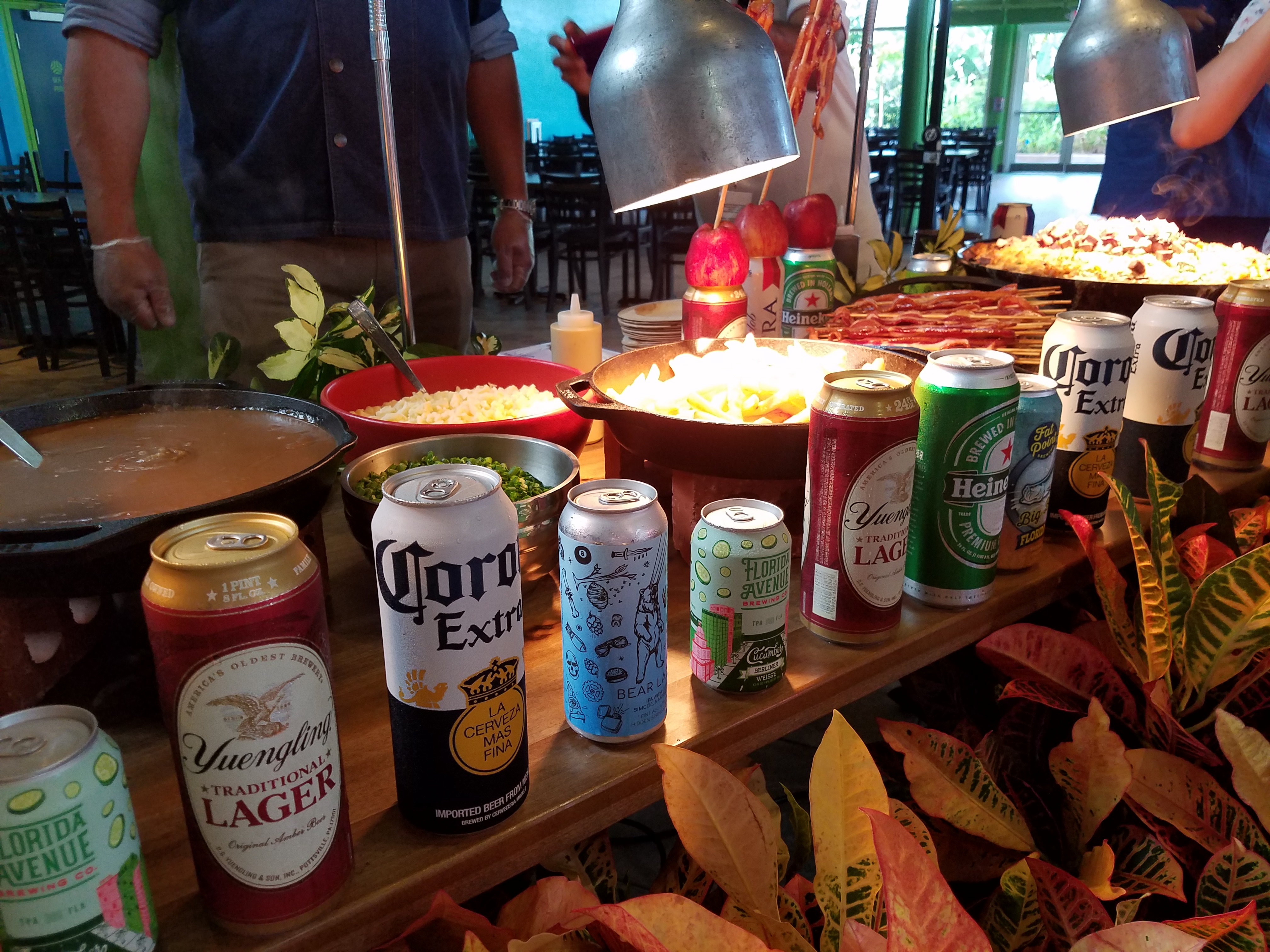 The big picture, though, is the explosion of Floridian breweries, from well-established examples like Fort Lauderdale’s Funky Buddha to Orlando’s own rising star, the Crooked Can Brewery. There are almost 50 beers on offer at the festival that owe their origin to the Sunshine State and there is just so much brewing creativity in Tampa, Key West, Gainesville, Dunedin, St Petersburg, Cape Canaveral and elsewhere that you could sip your way around Florida for a month and still only scratch the surface of what’s on offer.

You don’t have to, of course, because SeaWorld has done all the hard work for you. From the Dead Lizard Company’s Komodo Dragon Chocolate Stout to Motorworks Brewing’s Midnight Espresso, the park’s brewmasters have compiled an absolutely drop-dead-gorgeous array of ales that are simply sumptuous. 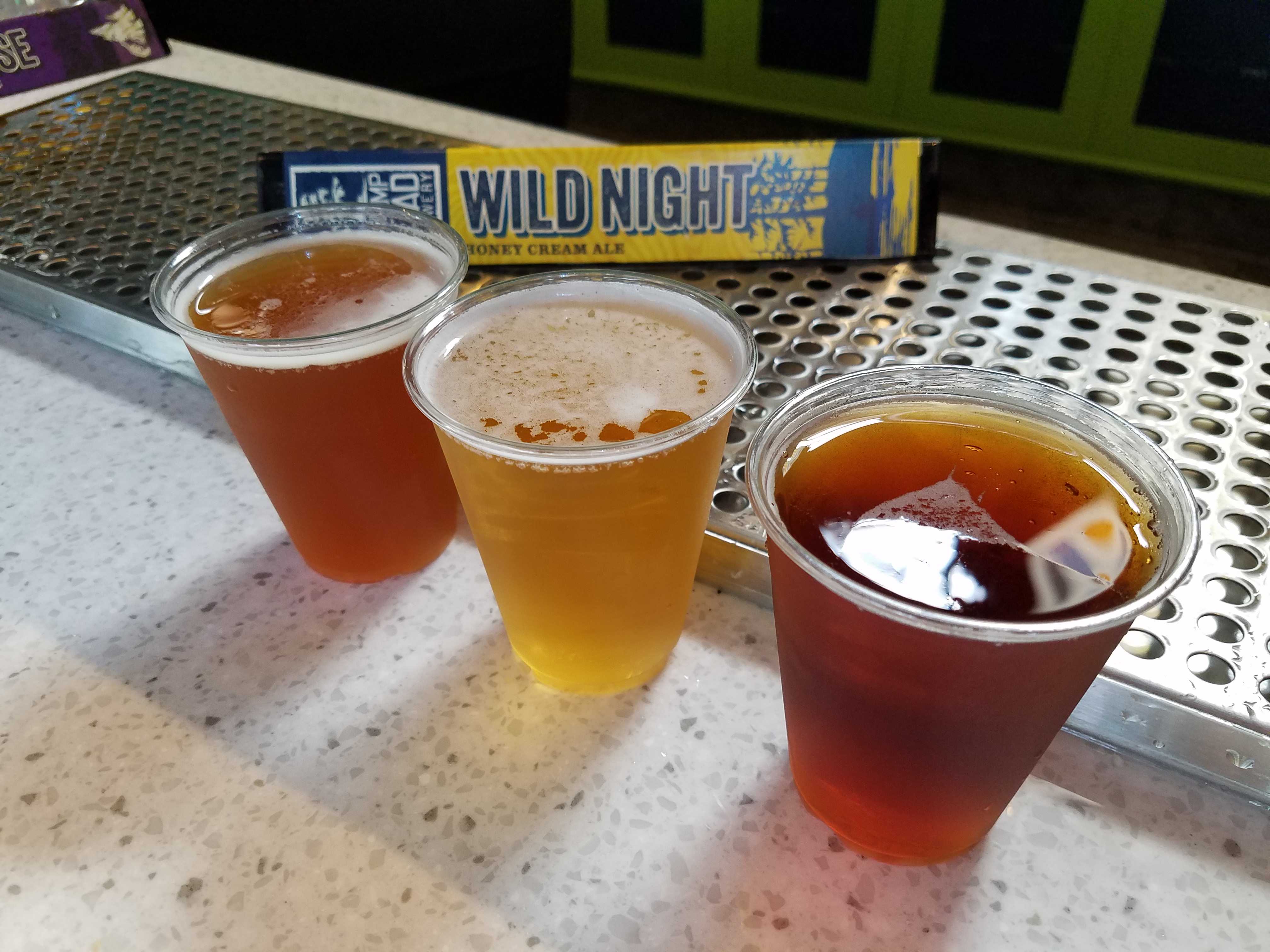 For our taste preview, we got to sample Cigar City Brewing’s Maduro Brown Ale, a Tampa favourite for the past 11 years; Florida Avenue Brewing Co’s Citrus Zest, another Tampa taste sensation that is deliciously light and flavourful; from Fort Pierce, their Tag & Release American amber ale, a tangy but smooth beer with hints if IPA properties; and the Swamp Head Wild Night honey cream ale, another smooth operator from the creative folks in Gainesville.

Finally, look out for Chef Hector’s Beer Floats. If this sounds like an odd idea that’s because it is, but it works amazingly well. As Hectors says, “I love sweet stuff and I found all these fruity, peanut butter and chocolate beers, so what better to do than to put them with a bit of chocolate ice cream, some vanilla ice cream and a little bit of raspberry sauce, so it’s a beer float with a different type of beer. These are strong beers with some great flavours and it all works really well.” 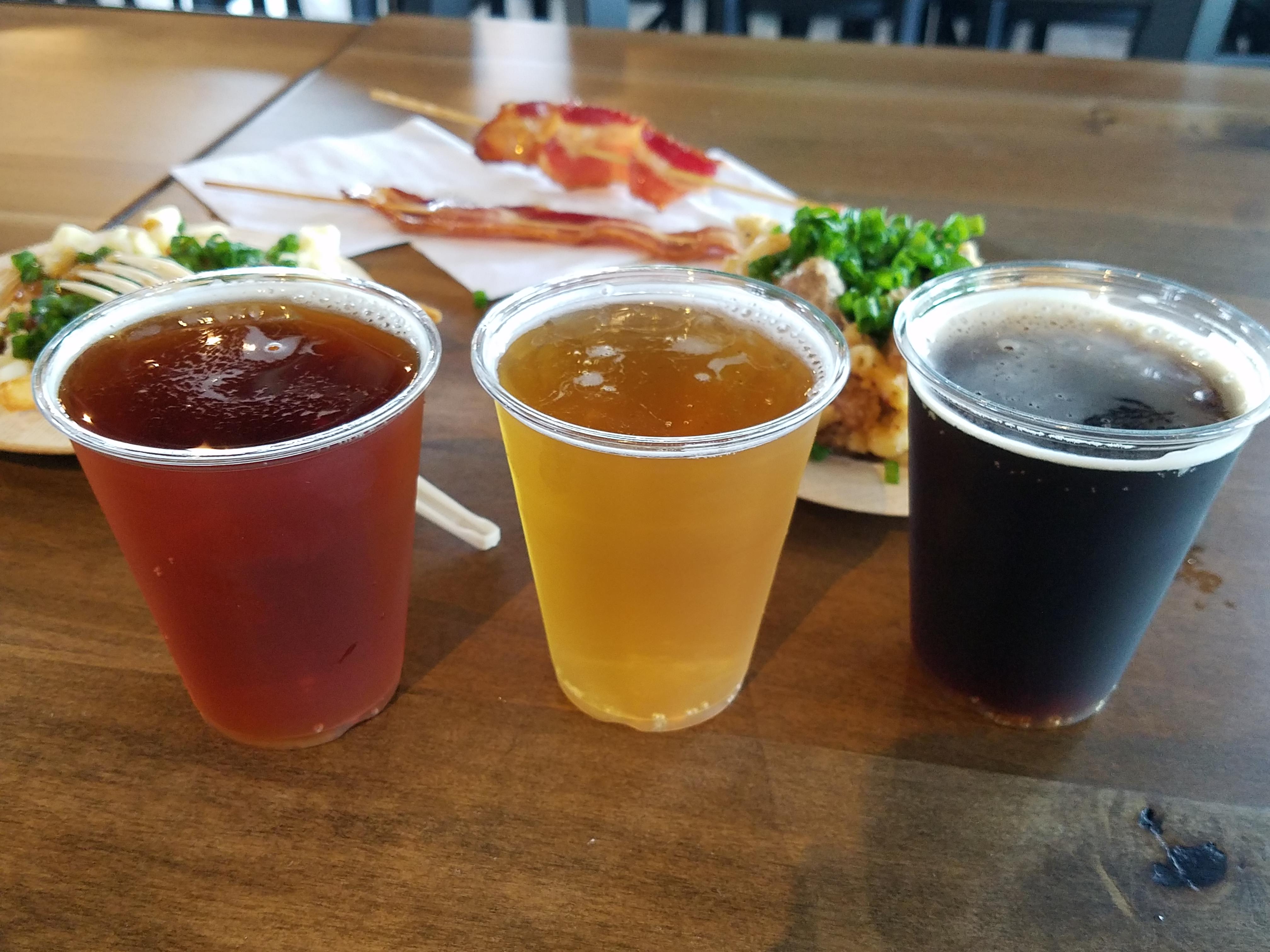 Best way to enjoy all those beers is with an 8 or 12-selection Sampler Lanyard for $40 or $54, which provides 8 or 12 options from any of the 18 Festival outlets, meaning you can mix and match the food and drink as much as you want without having to keep dipping into your pocket, and you’ll save a few dollars on individual prices, too,

The Festival is spread out right throughout the park, with both indoor and outdoor venues to sit and sip all the amazing variety on offer. There are tipples and bites in places like the new Waterway Bar (right next to Infinity Falls), the Flamecraft Bar in the Waterfront area and Shark’s Bar, but look out particularly for the special kiosks in front of Voyagers Smokehouse and the Spice Mill Market. And those Beer Floats – well, you’ll find them at the Soft Serve Market in the Sea Harbor area. A beer-flavoured dessert in a cup, this should convince you that no festival should ever be without this combination in future!

Want to know more SeaWorld or any other aspect of a full Orlando holiday? Come and ask your questions – or tell us your experiences – on the fab ATD forums.