By ATD’s Florida Experts, Susan and Simon Veness
If it’s summer in Orlando, it must be time for extra evening entertainment at SeaWorld. It must be time for their Electric Ocean programme of special shows and dance parties that light up the night in this corner of Central Florida.

And, when you want the highlights package of what to enjoy at this wonderfully scenic theme park, there are seven key elements to watch out for during this ‘electric’ period of night-time fun and frolics, all served up with great style and no small amount of humour.

You’ve probably heard us talk about Electric Ocean before (after all, it comes along every year!), so this summer we thought we’d take you straight to that Magnificent Seven, underlining how to get the max out of your evening with Shamu and friends. There’s a veritable feast in store, and it all starts with… 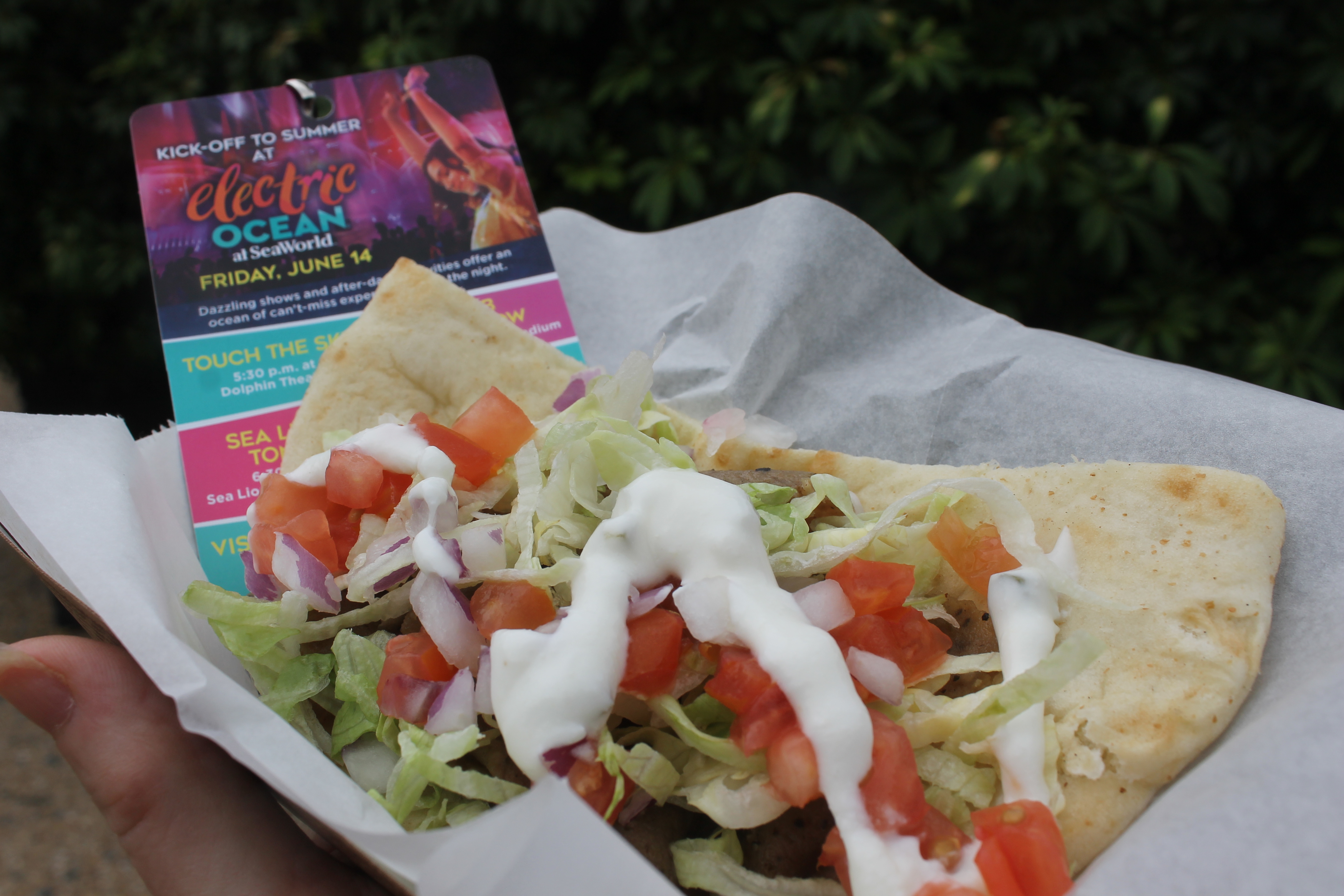 SeaWorld has done an excellent job in recent years of creating memorable dining opportunities to go with their seasonal celebrations, and Electric Ocean is another great example of how to please your tastebuds while touring the park. There are special food kiosks sprinkled throughout the park – in addition to the regular dining hot-spots – and you can take advantage of festival specialities such as lamb kebabs, deep-fried Mac and Cheese, Steamed Bao Buns and a Barbecue Sundae, which is basically pulled pork or chicken piled up with cornbread, coleslaw and baked beans, topped with an onion ring and served in a mason jar! 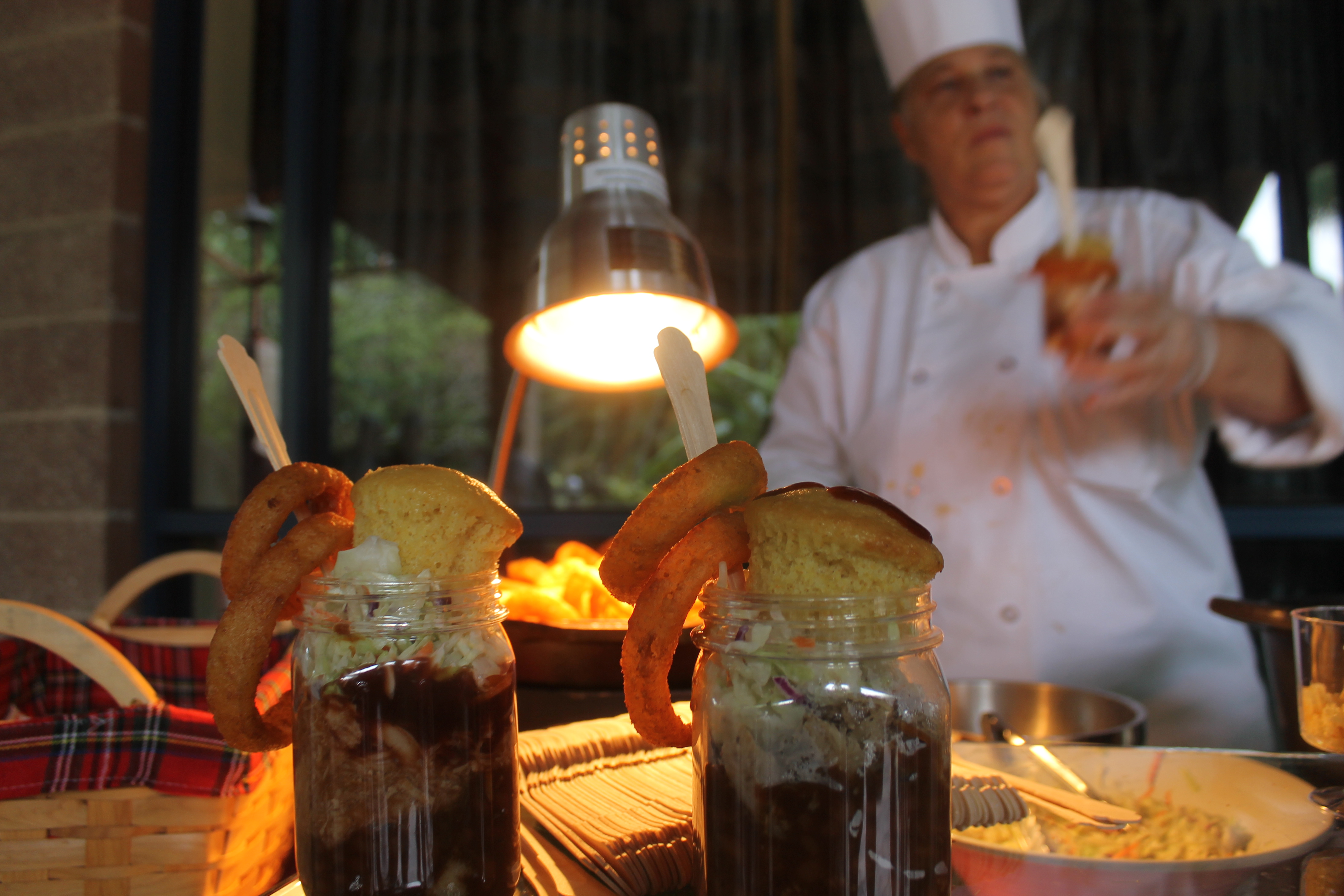 Make sure to save room for dessert, though, as there are super-tasty treats in store, notably their Loaded Mini Donuts (served with an array of tempting toppings) and the super-duper “Oh-why-not-after-all-we’re-on-holiday’ Donut Ice Cream Sandwich, which stuffs a cinnamon-dusted doughnut with vanilla ice cream and then rolls it in your favourite topping. Decadent? You bet. Tasty? Even better! Look out for speciality drinks, too, along with an array of craft beers. 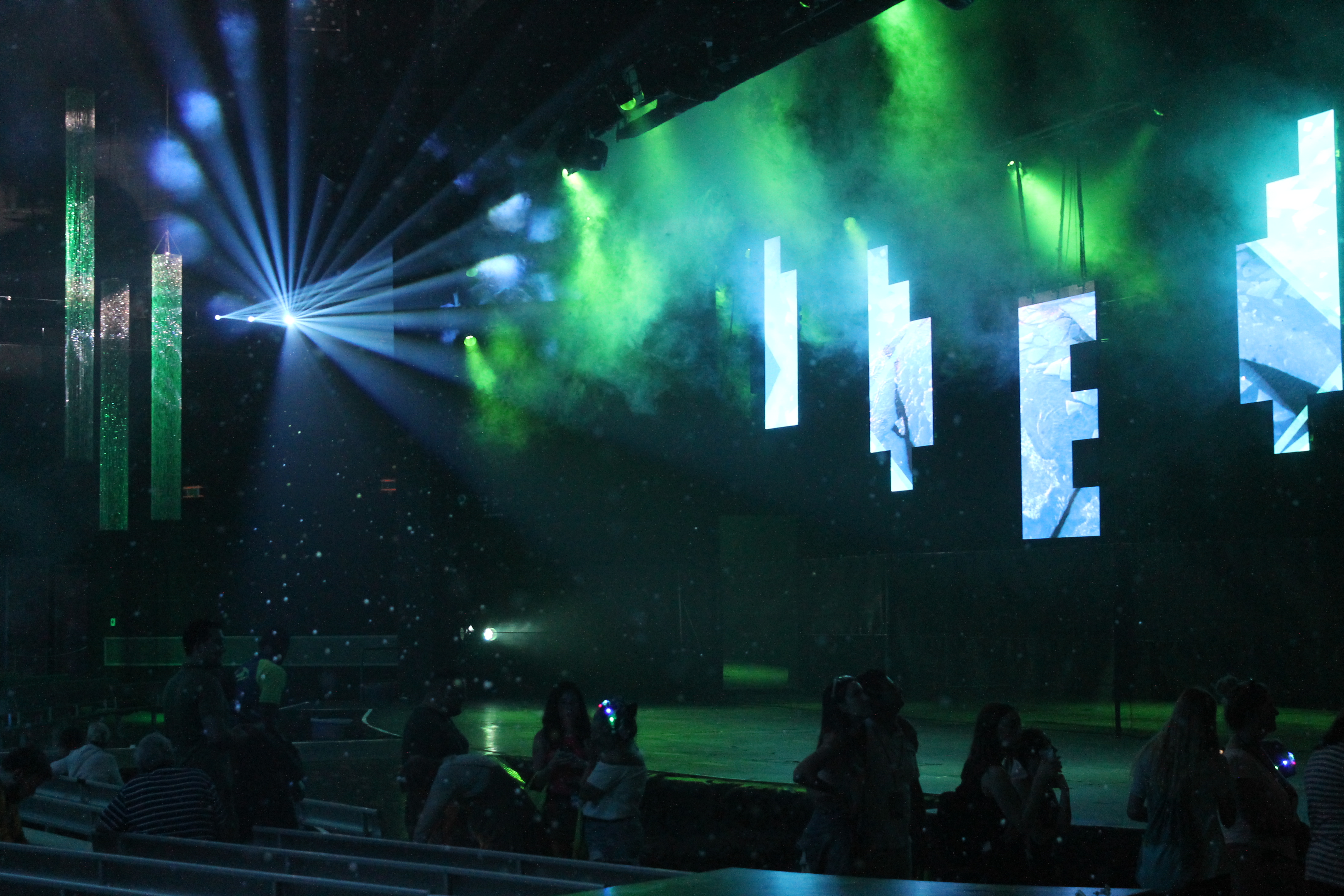 New to Electric Ocean this year is Club R&R, an ultra-lounge style, ultra-relaxed air-conditioned haven in the Nautilus Theatre. With a bar in one corner, the usual bench seating and a series of light-up tables, this becomes a fun little hideaway to give your feet a rest and take a literal chill-out break from the Florida heat (when it can still be 28C well into the evening). The laid-back club vibe is enhanced by laser lighting and other special effects, including periodic dry ice and ‘snowfalls’. 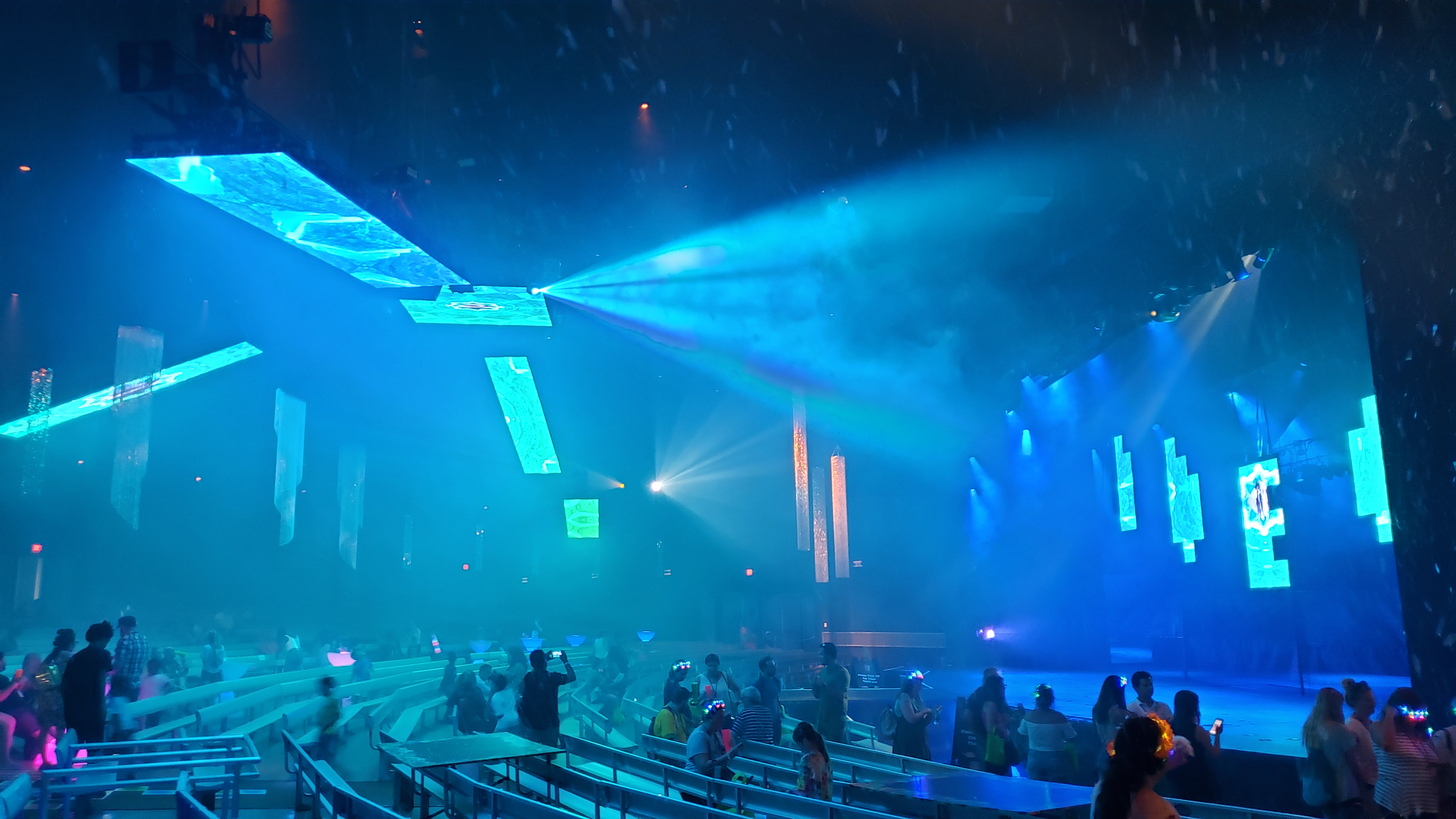 You can also charge your iPhones and other gadgets at the tables, which we found extremely handy, while the bar offers a nice selection of drinks, both alcoholic and non-alcoholic, including a Frozen Sangria, Electric Lemonade and Pina Colada, plus beer, wine and fruit pops (we recommend the Pina Colada!).

When it comes to the Main Events of Electric Ocean, there is no doubt that these five big-production events are the meat and drink of the evening, adding a pulsating variety of high-energy entertainment to the occasion, and providing an unforgettable nightly finale at 9.30. They are also arranged in sequence, so you can head from one to another without having to rush. You WILL have to cover a lot of ground, though, so make sure you have your comfy shoes on. 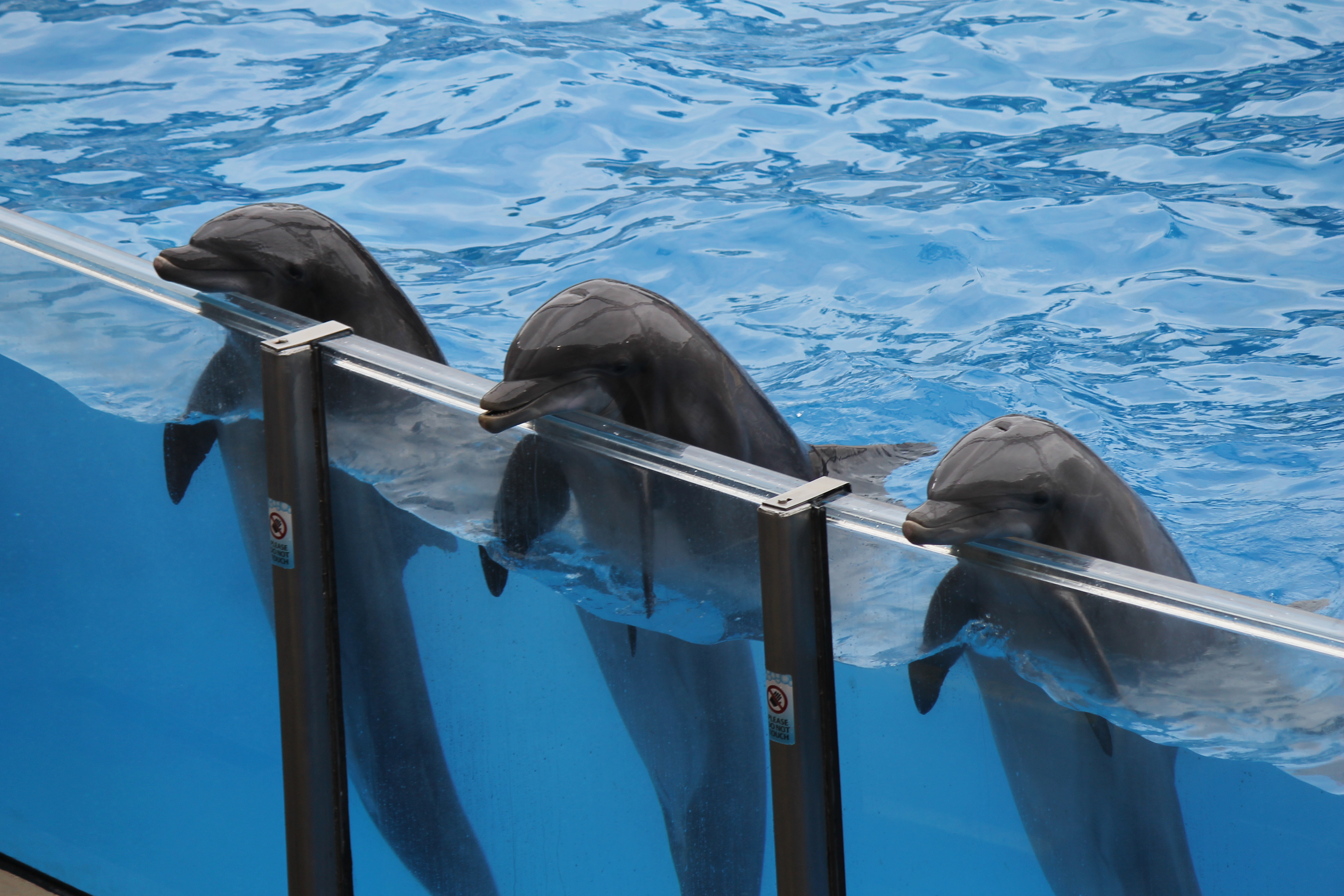 Touch The Sky: Kick off the night with this dolphin ‘edutainment’, highlighting the park’s community of Atlantic bottlenose dolphins in something that is not so much a show as a showcase of dolphin behaviours and interactions with their trainers that also serves as a valuable environmental message of recycling and conservation. The park’s colourful macaws also get in on the action, and the anthemic song ‘Touch The Sky’ will be in your memory for quite a while afterwards! 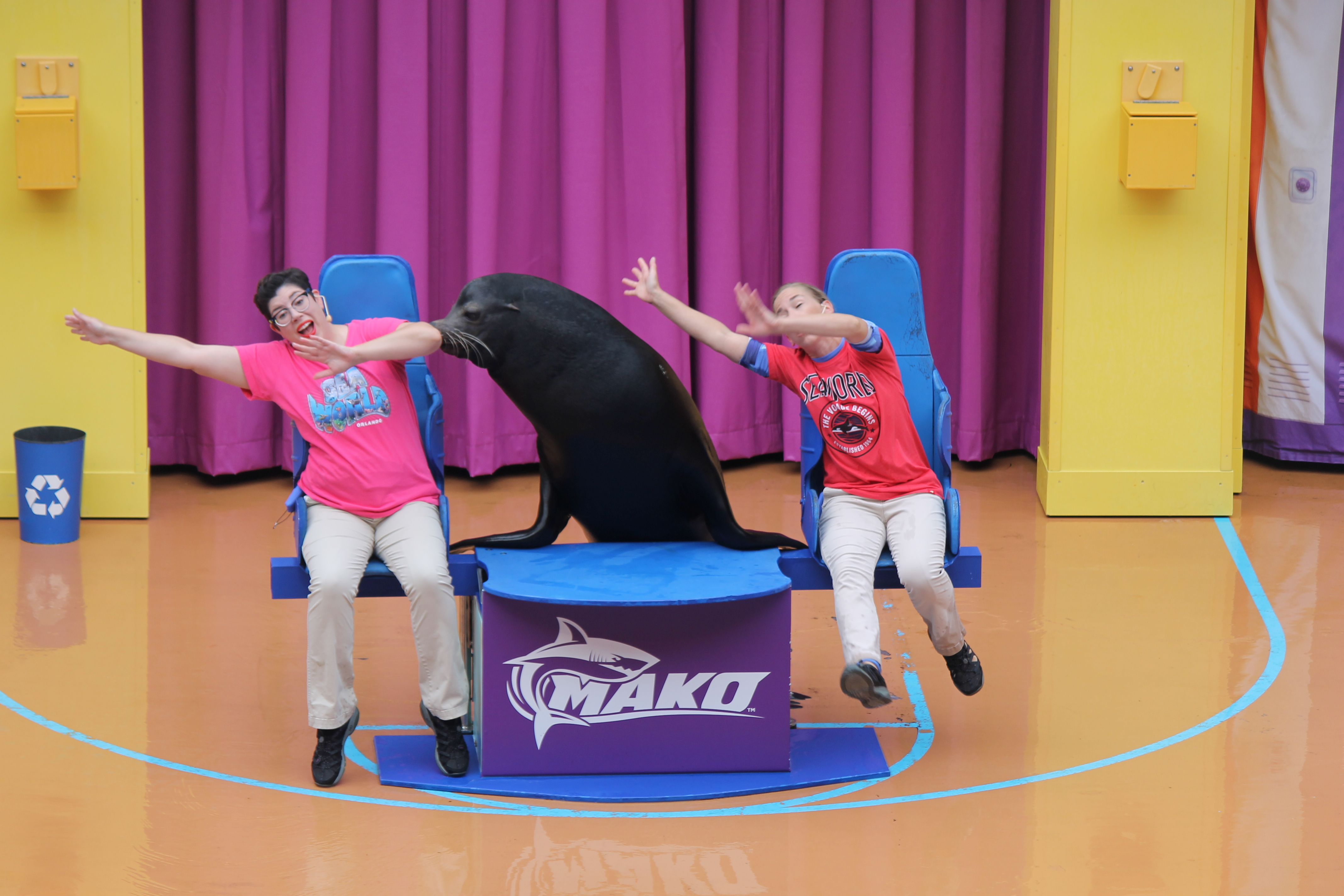 Sea Lions Tonite: Get ready for a riot of gags and giggles (often at the expense of SeaWorld’s daytime shows, in what amounts to a glorious send-up of their own enthusiastic style) in this wildly fun and frantic show featuring sea lions Clyde and Seamore, plus their friends Opie Otter and Sir Winston the walrus. Together, they serve up a joke-fueled pastiche of “a typical day at SeaWorld,” from arrival in the car park to a Mickey-take of the Shamu show, with the help of the resident mime, who continues to make the pre-show a laugh-filled affair. 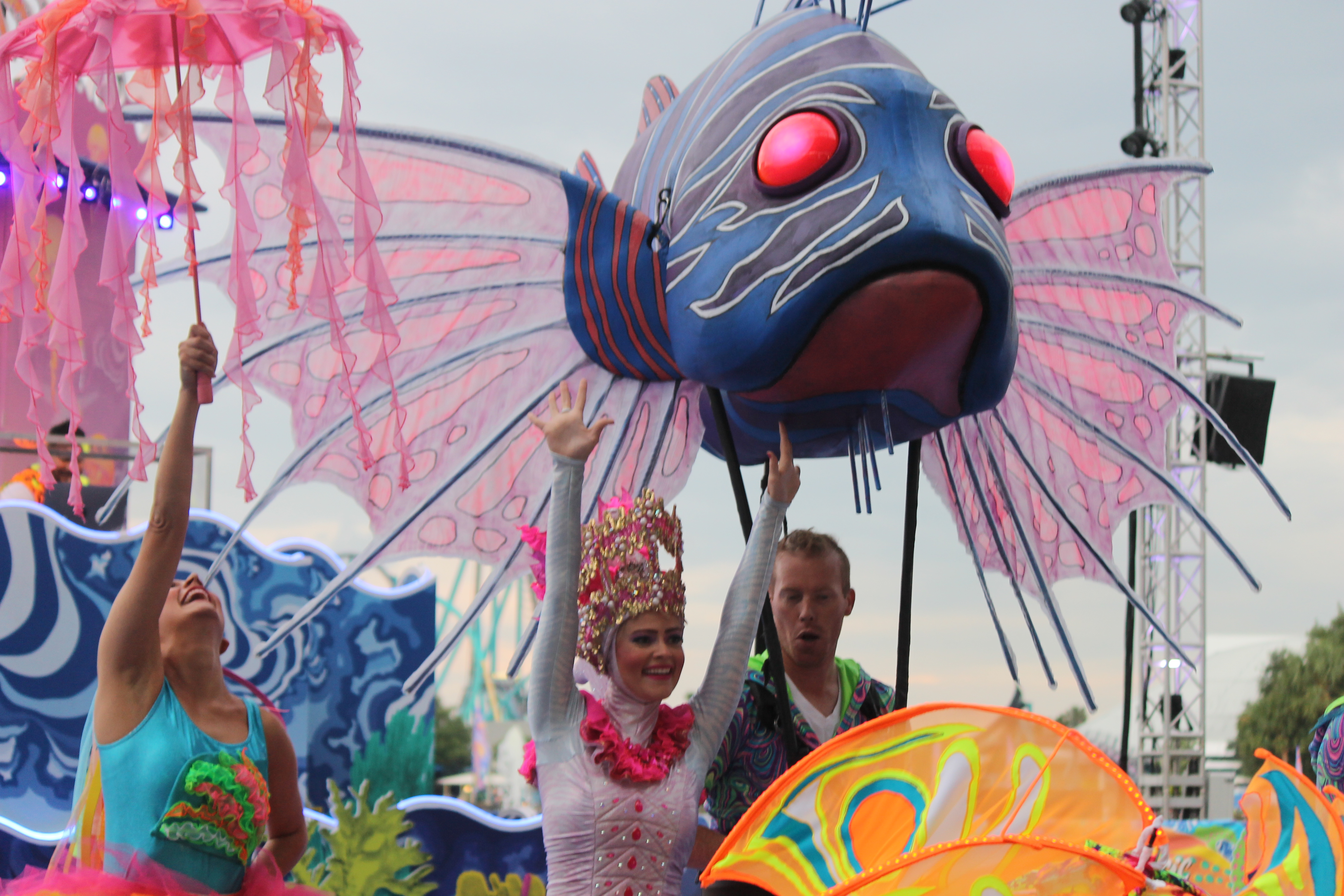 Club Sea Glow: There’s built-in time for a Club R&R break before you head to the Bayside Stadium for the next event, which is great family fun for those with children, as it starts with a dance presentation from dozens of colourful ‘sea characters,’ and then opens up the dance floor to a full-on party for everyone to join in. The resident DJ cranks up the tunes and it is terrific interactive fun for all concerned, especially as the cast make sure to pay attention to younger children and those who might be a bit hesitant to take part. Again, the theme song will stick in your mind as another ‘reminder’ of the evening. 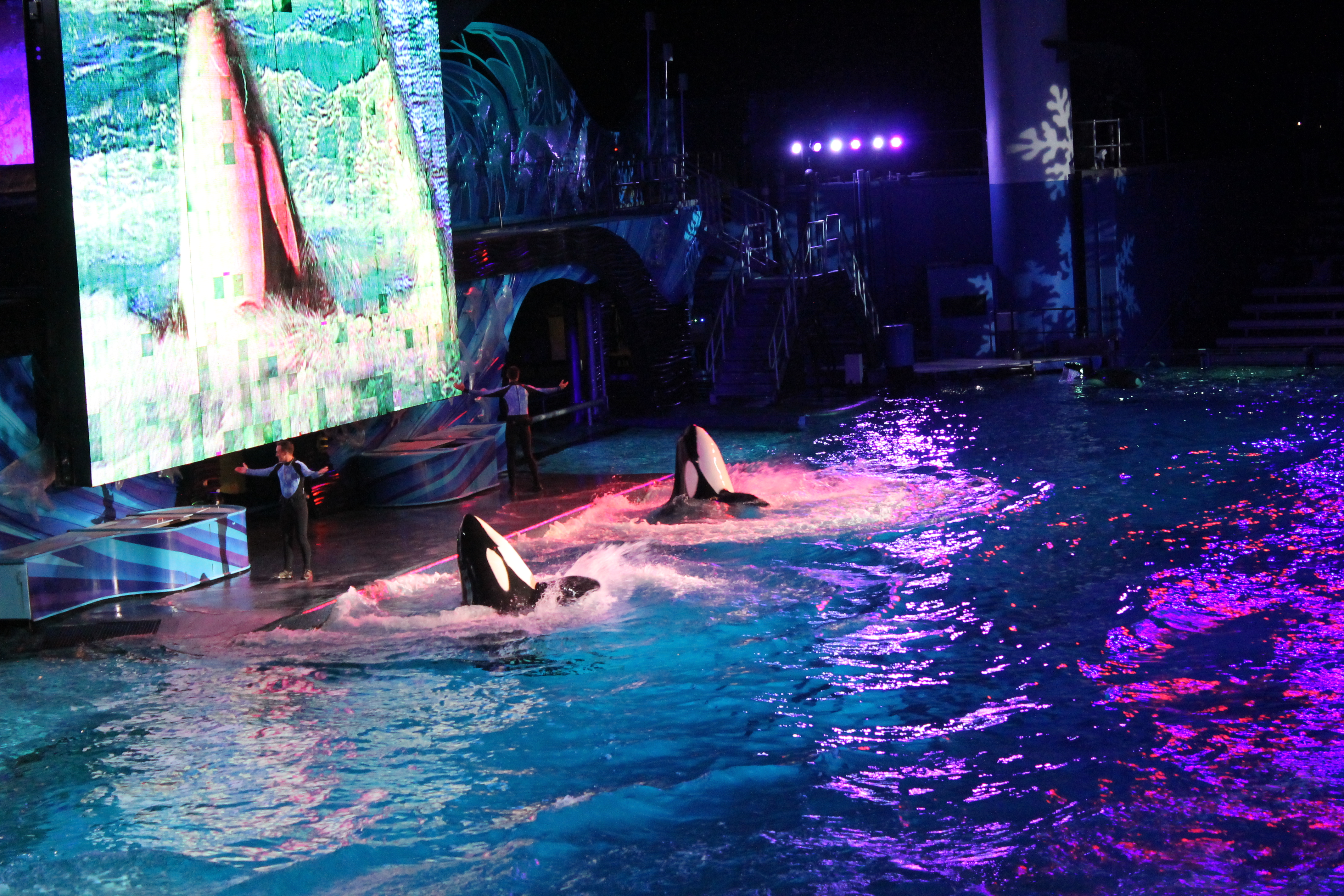 Shamu’s Celebration: Light Up The Night: The park’s killer whales have their own showcase at 8.30pm, taking a more relaxed but still highly charged production into the night with a mixture of memorable soundtrack, lighting effects and social interactions among the animals themselves. Once again, it is not so much a show as an informal playtime for the whales, albeit the first 20 or so rows of the theatre are still likely to get seriously wet! 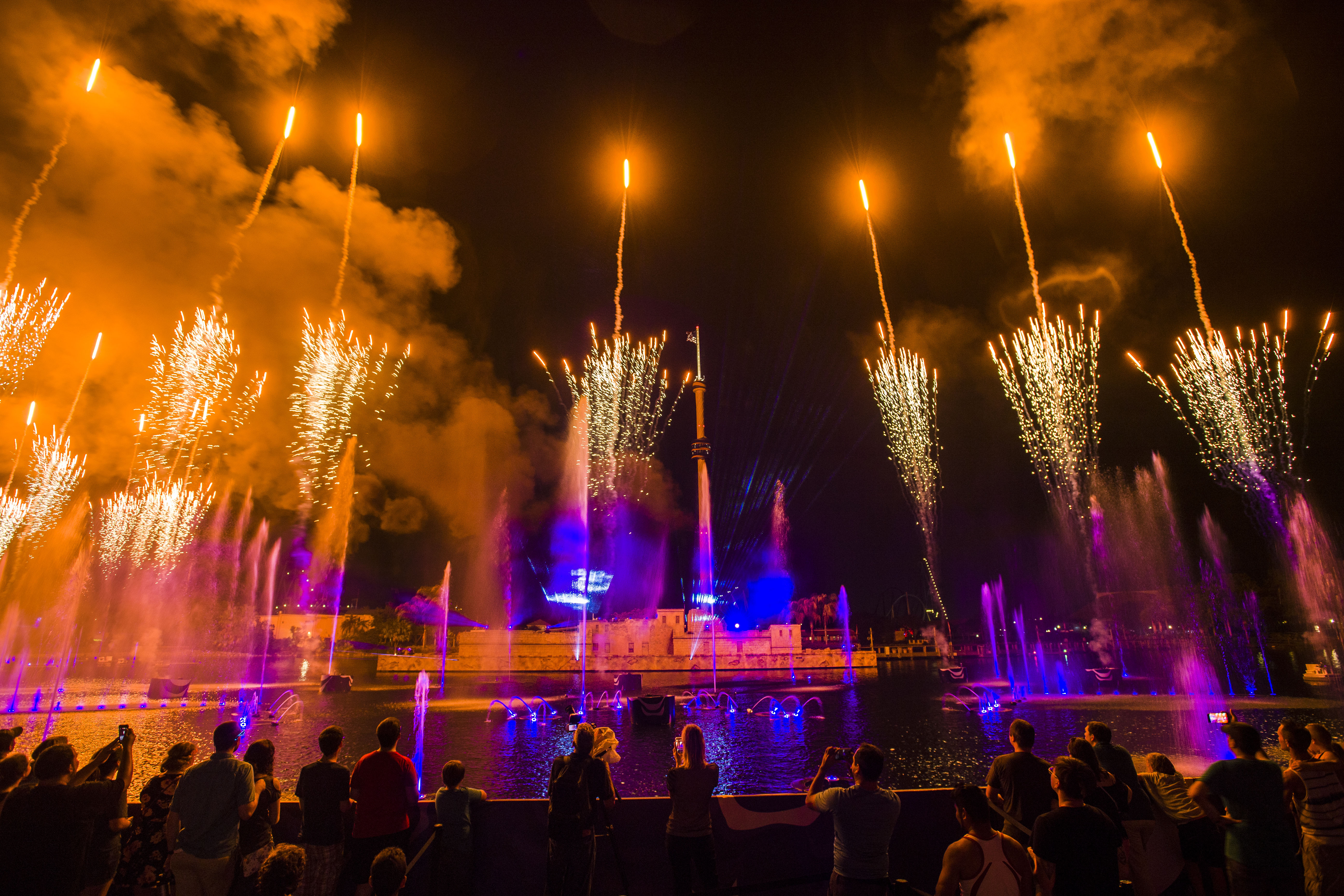 Ignite: Once the whales have done their stuff, it’s time to wander back to the Bayside Stadium for Electric Ocean’s signature closing event at 9.30. And, if you thought Club Sea Glow was a high-energy, high-quality presentation, prepare to be dazzled by this vivid showcase of lasers, fountains, music and fireworks as Ignite really does light up the night with a kaleidoscopic array of special effects. For our money, this is the best night-time show in Orlando and you absolutely shouldn’t miss it. 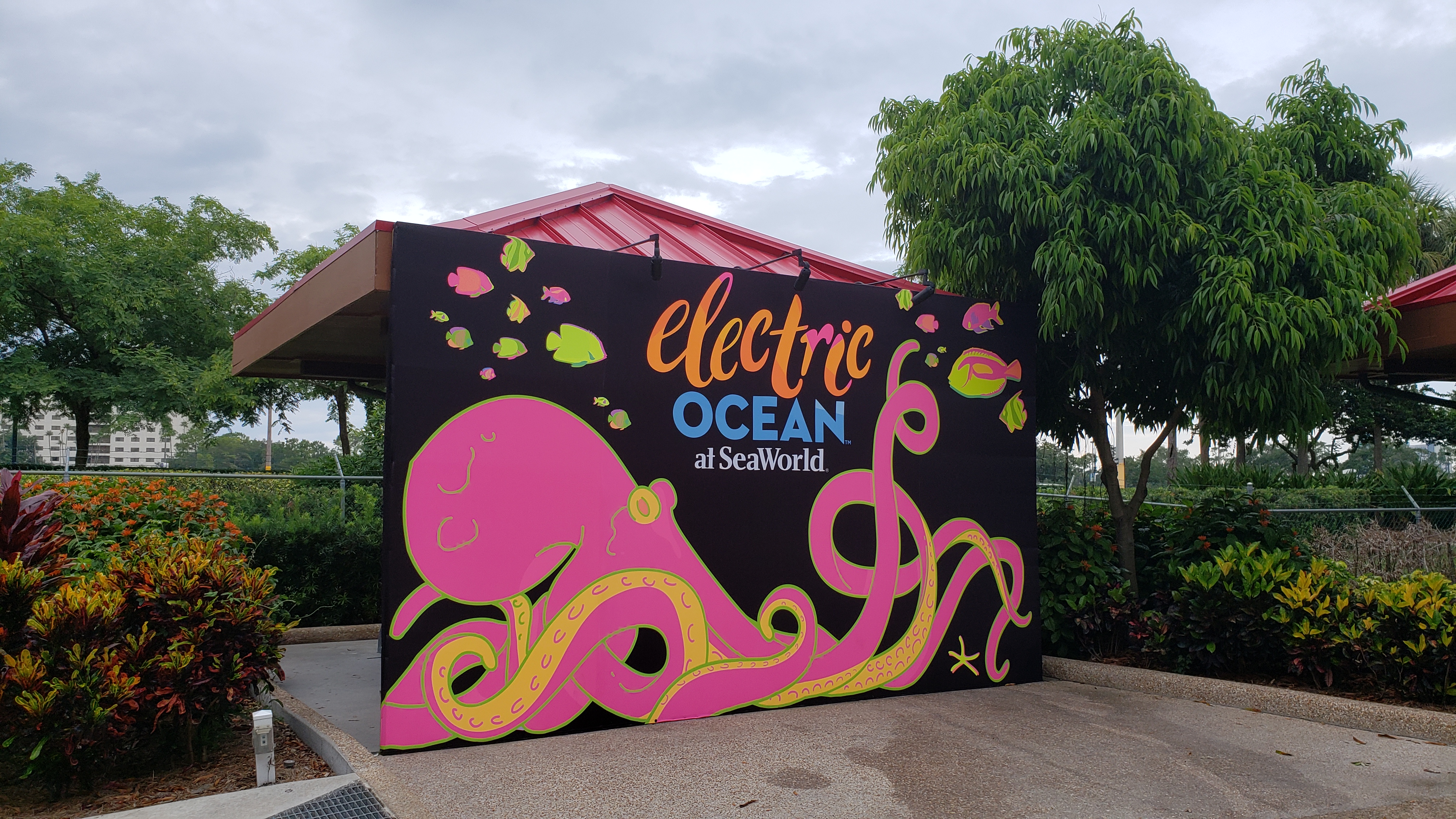 Essential info: Electric Ocean runs from 5.30pm every night from June 21 to August 11, and every Friday, Saturday and Sunday from August 16 to September 1 and is included with general admission. You can also get Reserved Seating for the four main shows (Touch The Sky, Sea Lions Tonite, Shamu’s Celebration and Ignite) for an extra $20 per person, but make sure you have your SeaWorld tickets in advance from ATD on this link.

Want to know more about SeaWorld and its Electric Ocean evenings? Head on over to the fab ATD forums and join in the friendly banter and chat.