By ATD’s Florida Experts, Susan and Simon Veness
Yes, it’s that time of year again when monsters lurk, zombies rise and chainsaw gangs roam – and crowds throng to Universal Orlando to be scared witless by this annual fright-fest!

Halloween Horror Nights is back, and it’s bigger and better than ever, with 41 nights of fear and fun in equal measure, all mixed together with Universal Orlando Resort’s unique – and world-class – attention to detail for the horror genre.

We were at the opening night on September 6 and were treated to the full, awesome spectacle of TEN terrifying haunted houses, FIVE blood-curdling scare zones and TWO superb new shows that add an outrageous amount of entertainment value to the event, which runs from 6.30pm to 1 or 2am on select nights until November 2.

In truth, there is an absolute blizzard of outrageously over-the-top, disturbing delights in this year’s presentation, and we struggled to fit them all in to one evening, even with our own ‘RIP Guide’ to steer us around and take advantage of front-of-line privileges. We arrived at 7pm and staggered out, foot-weary but thrilled, just after 1am. Yes, there is THAT much to fit in – and that was without doing a single one of the seven rides on offer throughout the night! 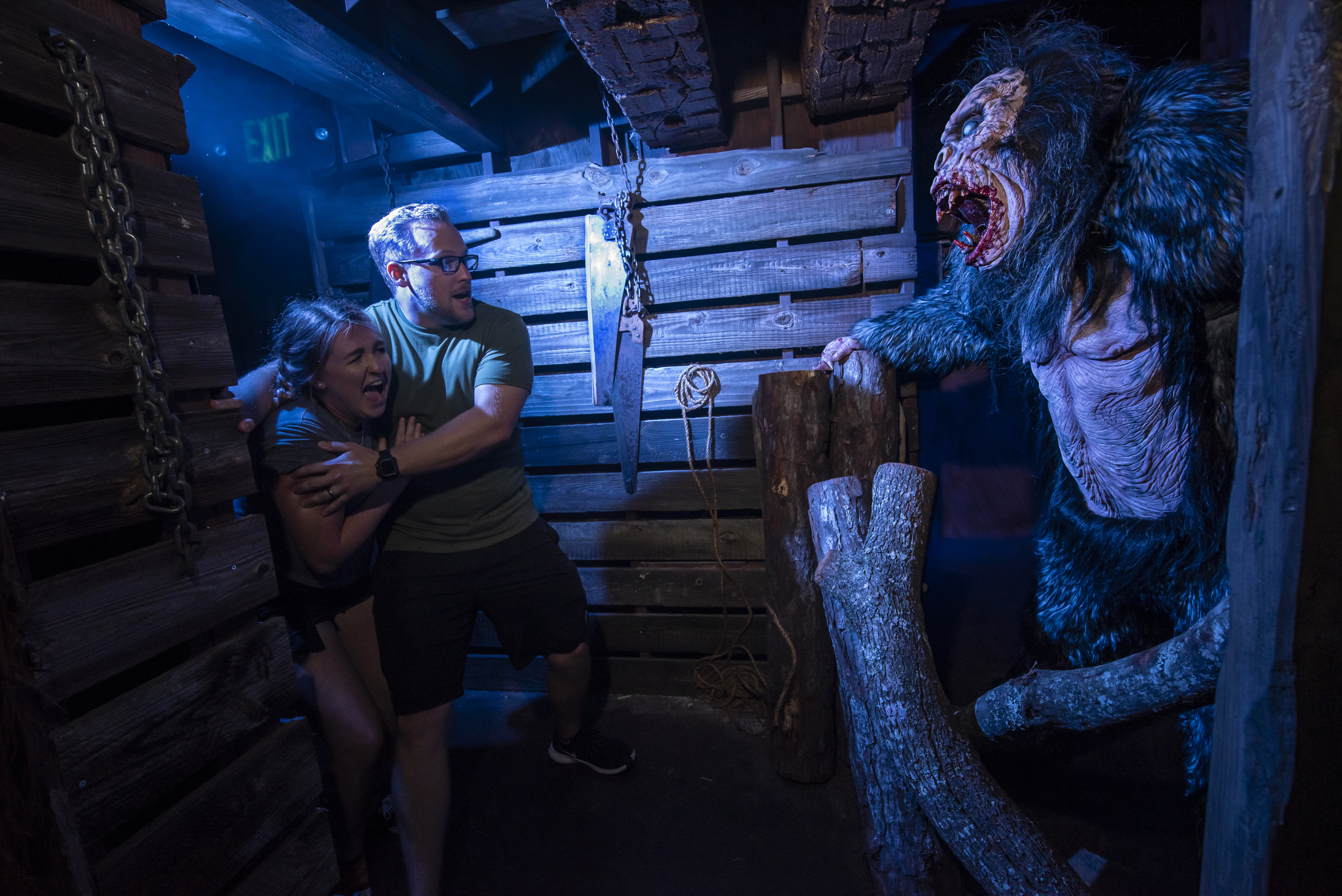 (As a quick aside, the sheer volume of things to do at HHN 2019 means ATD’s Frequent Fear Pass is excellent value. We highly recommend it.)

It’s not all about the fear-filled quantity of what’s on offer, either. In fact, after 15-plus years of visiting this yearly horror highlight, we would say Universal has raised the quality level even further, providing more variety and rather less of the out-and-out grisly gore we’ve seen in the past.

In fact, we’d go as far as to say, this is the Halloween event for non-horror fans, as the balance between gruesome and handsome is closer than ever, especially with the live entertainment elements (see below).

The real trick is fitting in as much as you can into just one evening, so we thought we’d flag up our Top 6 Can’t-Go-Wrong, Mustn’t Miss attractions of this year’s presentation. These are the absolute five-star, 24-carat elements that will have the biggest queues, hence you’ll want to make sure you get to them as early as possible (albeit, you can save the two shows for later performances).

While all five Scare Zones are well worth experiencing, and the Vikings Undead zone is distinctly delightful in its devilish detail, no-one can wander through the pulse-pounding realm that is this heavy metal horror without feeling electrified by its combination of throbbing rock soundtrack and crazy characters in disturbing theatrical settings.

Most Universal fans will know the park originally had a Ghostbusters attraction (that was replaced by Twister and then the current Race Through New York Starring Jimmy Fallon), and the 1984 film blockbuster is the perfect vehicle to turn into a Haunted House, adding a genuine comedic element to a large-scale HHN production. Visitors are introduced to the famous team via the New York Public Library, which is the cue for a series of brilliantly-staged ghostly manifestations that are as much humorous as they are ominous. 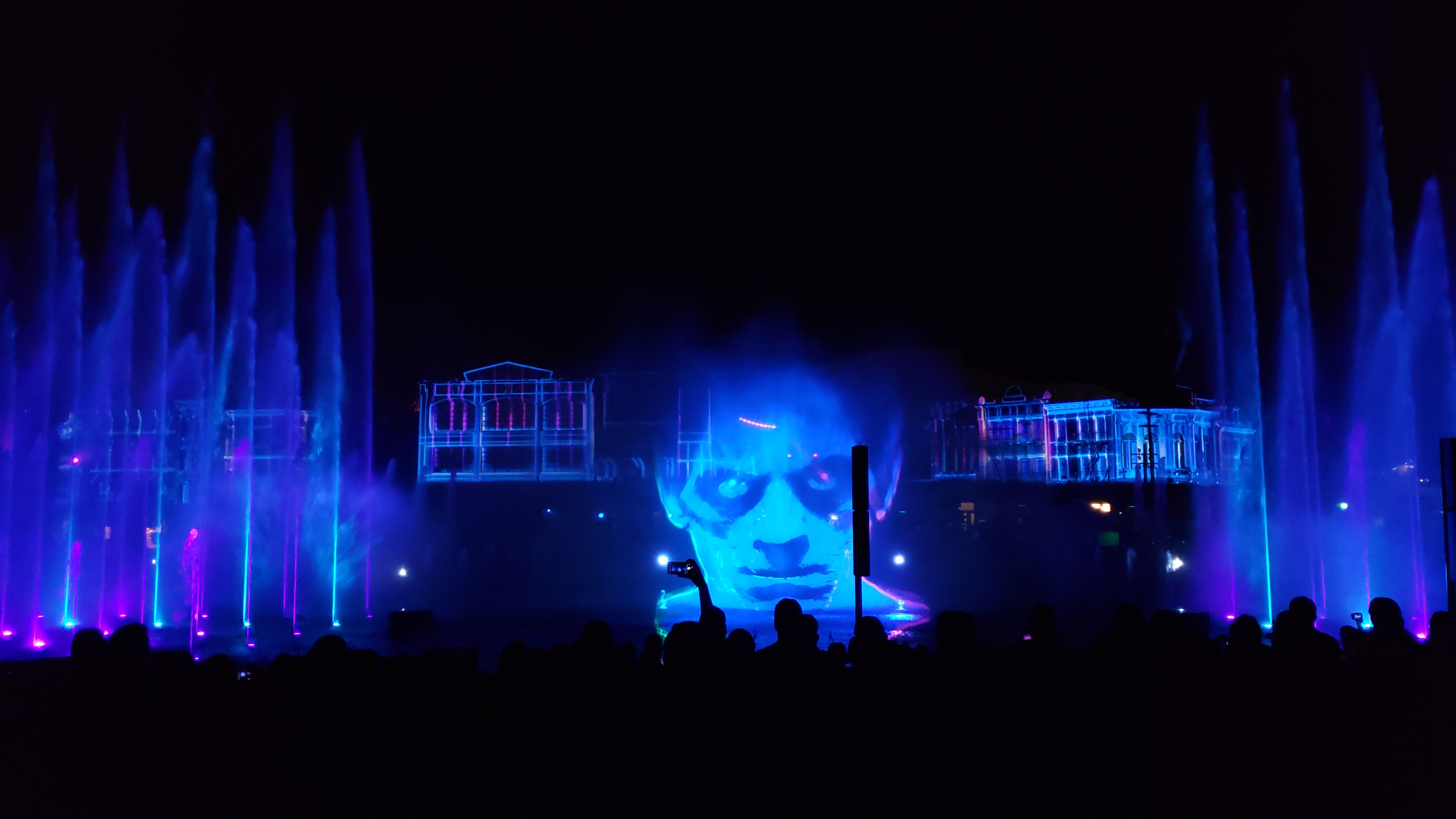 Here’s another clever move on the part of Universal’s design honchos – taking the nightly Cinematic Spectacular special effects show on the main lagoon and re-theming it for the fright-filled occasion. Highlighting many of this year’s HHN elements, and adding in its own mix of classic horror touches, the Marathon of Mayhem uses the full array of lights, fountains and projection media to maximum effect, ensuring a riveting 10-minute presentation three times each evening.

Jordan Peele’s scintillating psychological horror flick was one of the big hits of this year, and it is perfect HHN material thanks to the many iconic (not to mention chilling) moments from the film. With this one, it really does help if you know the movie beforehand, as this is where Universal’s story-telling is in full effect, taking visitors on a doom-laden journey into the world of The Tethered, who are desperate to seek revenge against their privileged ‘doubles.’ The sense of being ‘in’ the film is wonderfully re-created, and those mysterious bunnies will keep you guessing for days afterwards!

After being the big, big hit of HHN 2018, it should be no surprise that a reprise of this massive Netflix TV series was always going to be another ‘Can’t Miss’ moment in 2019. And so it proved. Whereas last year’s effort was based purely on Season One, this latest version takes guests through Series Two and Three in riveting fashion, reintroducing the realm of the Upside Down and throwing in the scene-stealing Demodogs, with all their sense of menace and malevolence. Here, things also take a turn for the large scale, and the simple length of the House will have you gasping at the immersive nature of it all long before you reach the exit.

We came, we saw – and we couldn’t believe our eyes! If there is only one thing you do at this year’s HHN, it has to be the latest brilliant show from those masters of the dark dance arts, Academy of Villains. Now in their fourth year of Universal headlining, AoV have taken their spell-binding artistry to new levels, bringing an enhanced element of stagecraft to their mighty, non-stop dance routines, which mix dazzling synchronicity with sheer physical bravura. The lighting and staging ensure plenty of eye-catching moments, but it is the insistent rhythms of their power-packed choreography and visionary presentation (look out for the visually startling backscreen projections in particular) that leave you awe of their unique talents. And they have achieved the near-impossible – we almost didn’t miss the Bill And Ted show!

But that’s just our take on the six sensational highlights of HHN 2019. Everyone will have their own idea of what’s best, and what you can’t miss. It might be the scream-inducing Universal Monsters house, or the House of 1,000 Corpses (no, we didn’t count them all!). It could also be the brilliant submarine-themed Depths of Fear or the B-movie horror classic Killer Klowns From Outer Space, which was a scare zone last year and has its own fully-fledged house this time out.

Just make sure you throw yourself into it with all the total abandonment of Academy of Villains. And you will have a totally terror-ific time!

Have you been to Halloween Horror Nights? What was your experience – and what were YOUR favourite attractions? Tell us about your experiences on the friendly ATD forums.

Subscribe to our email to keep up to date with all the latest news and our special offers.