Six Ways You Can Take To Orlando’s Skies!

Expert View Column
By ATD’s Florida Experts, Susan and Simon Veness
You’ve walked a million miles during your Orlando holiday, and seen just about all there is to see from ground level. Now, we share our six favourite ways take to the skies, and see the Sunshine State in a whole new way!

Imagine standing in a field of grass in the pre-dawn stillness of an Orlando morning, just as the sun is thinking about rising. Imagine the soft roar of a flame heating the air inside an enormous bag laid out on the ground, filling it with heated air that makes the bag slowly rise, and eventually lift off the ground, with you in its sturdy basket. Imagine floating upward so gently you barely notice you’re moving, and then imagine a view of the Sunshine State so magical and magnificent you can hardly believe it’s real. That’s what a hot air balloon flight feels like, and they take to the skies nearly every day of the week. 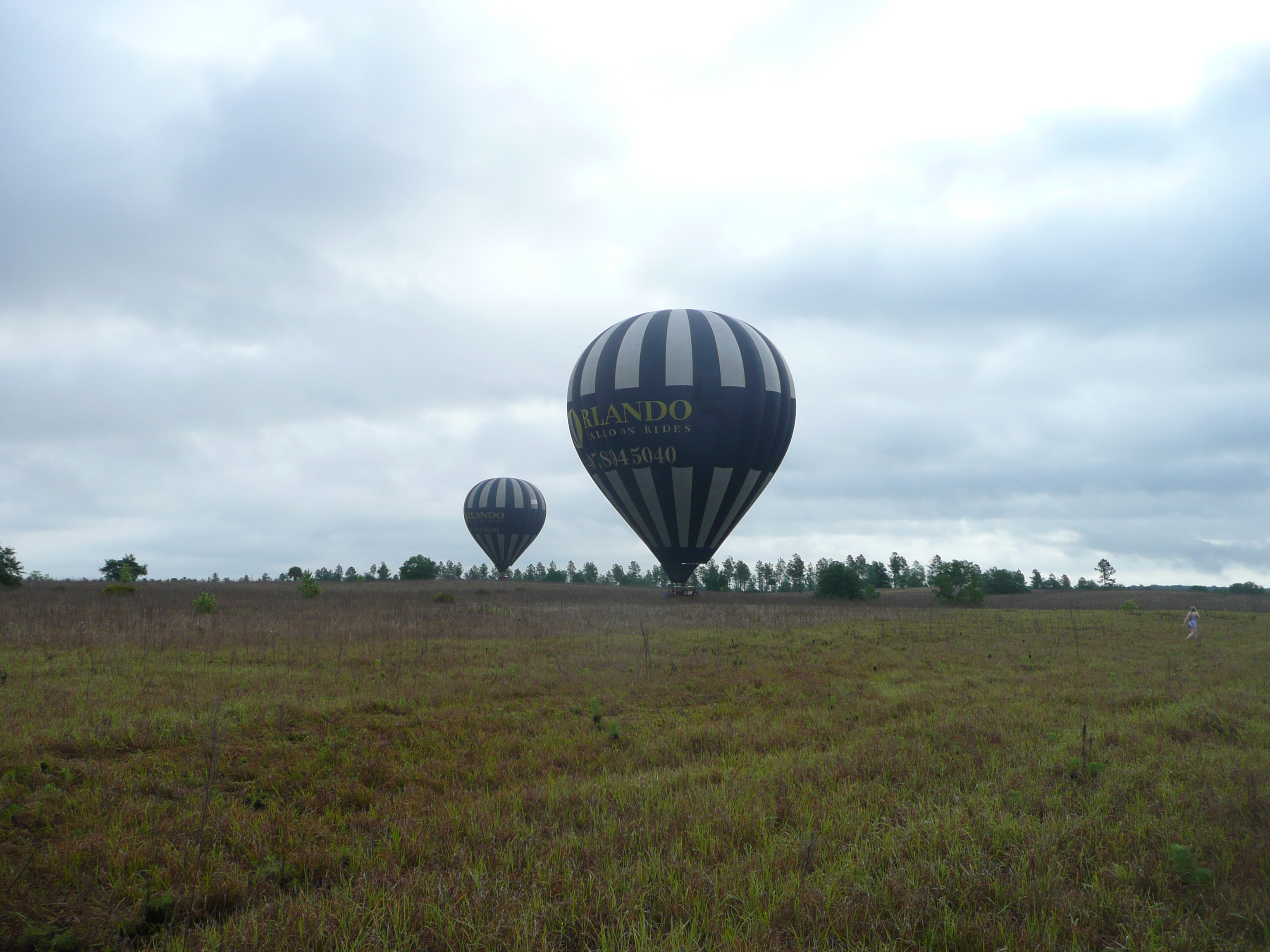 Will you be scared? Probably not. That same weird, false perception you get when you look out of an aeroplane window takes over, and while you are definitely up high during parts of your flight, it just feels…different. You’re also not at height during the entire flight. Often your pilot will skim the tree-tops, or dip the bottom of your basket in some hidden lake or pond you’re flying over.

Ages 6 and up can participate (age 19 to fly without a parent or guardian), but if one or two in your group prefer not to fly, they can sign up to be part of the chase team and still experience the pre- and post-flight fun.

Are you ready to give this breathtaking experience a try? We’re cheering you on, all the way to ATD’s Orlando Balloon Rides booking page.

A little more nerve-inducing than hot air ballooning for some, a little less nerve-inducing for others, taking a helicopter flight over the main tourist areas is truly one of the great add-ons to any Orlando holiday. From the ground, helicoptering looks fairly aggressive. From inside the cockpit, it’s pure joy. 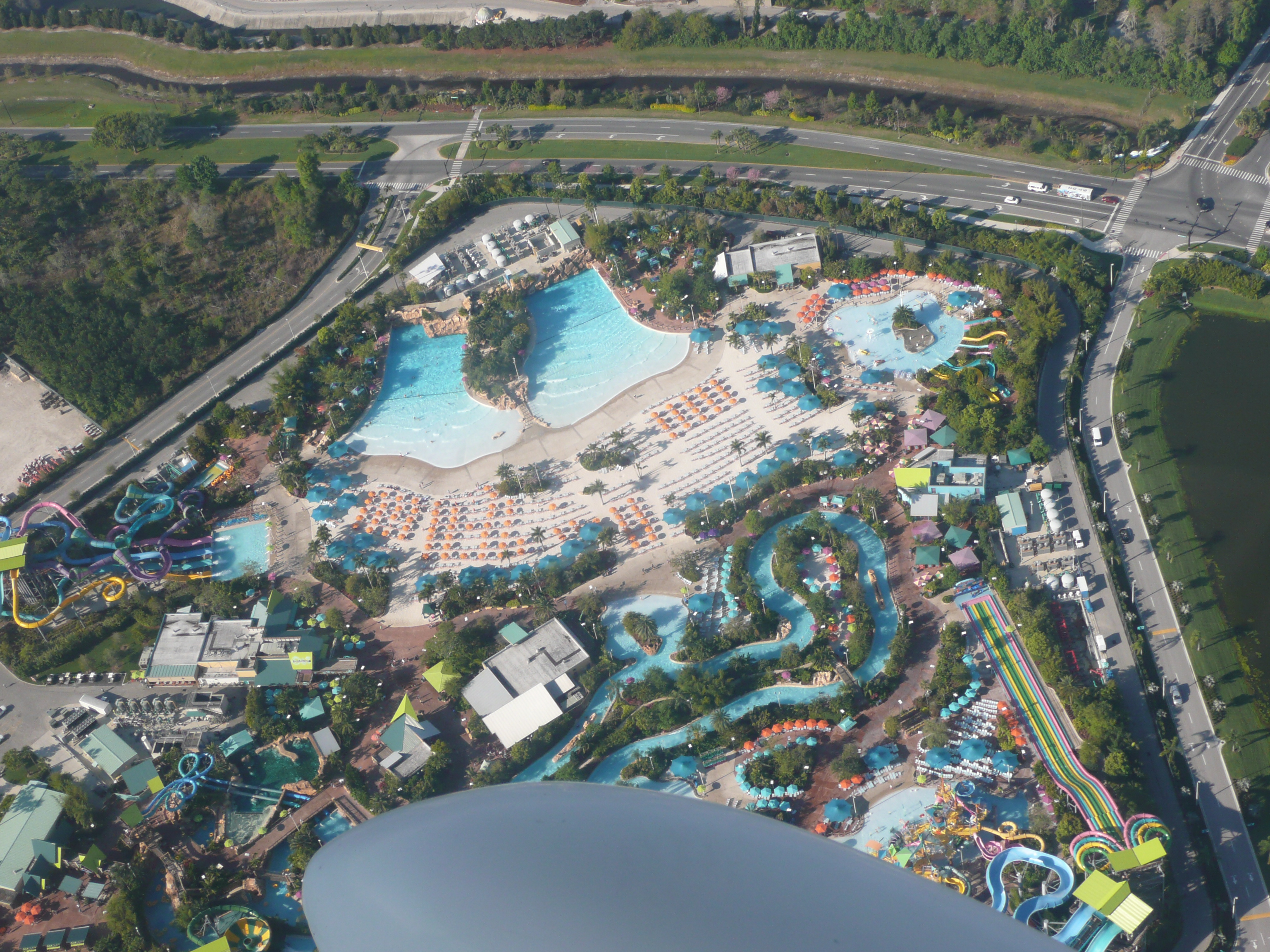 Take-off is extremely gentle (again, you may not realise you’ve launched until you’re several feet up), and you never feel unsafe, even during turns or descents. Many tours focus on the theme parks, so you’re guaranteed to fly over some of them, or all of them, with the exception of Magic Kingdom. Some companies even offer fireworks flights!

Our tip? Take a morning flight, when the air currents are less riled up, if you want the smoothest flight. And no matter when you fly, make sure you have plenty of space on your camera’s digital card. You’re going to take hundreds of photos when you fly over the theme parks.

There is something immensely visceral about strapping in to a sturdy sling seat with a parachute attached and gliding 600 to 1,200 feet skyward, with nothing below you but the ocean. Although there are no parasailing companies right in Orlando, there are several along each of Florida’s coasts, primarily out of Daytona and Clearwater. 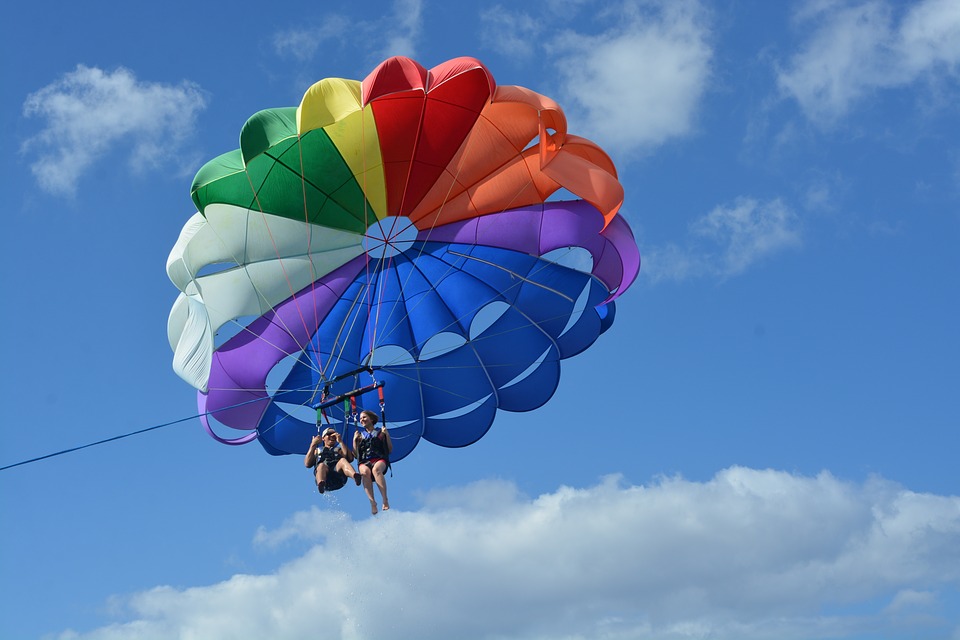 The main parasailing sensation is one of floating on air, and the lift-off is as gentle as that of a hot air balloon. Once you’re up, the wind whips gently around you, and it’s a pleasant experience rather than a rough one. You don’t even need goggles to protect your eyes from the breeze. And the view? Oh, what a view!

Age requirements are generally 5 and up, and, if there is room in the boat, non-flyers can tag along for the ride…and get some fantastic photos.

Serious flyers only for this one! Although anyone who is 4-foot tall (122cm) and 18-stone or under can take the controls, a flight with Warbird Adventures in Kissimmee does take some moxie. Adding aerobatics to your flight requires even more intestinal fortitude, but it’s an experience you will never forget. 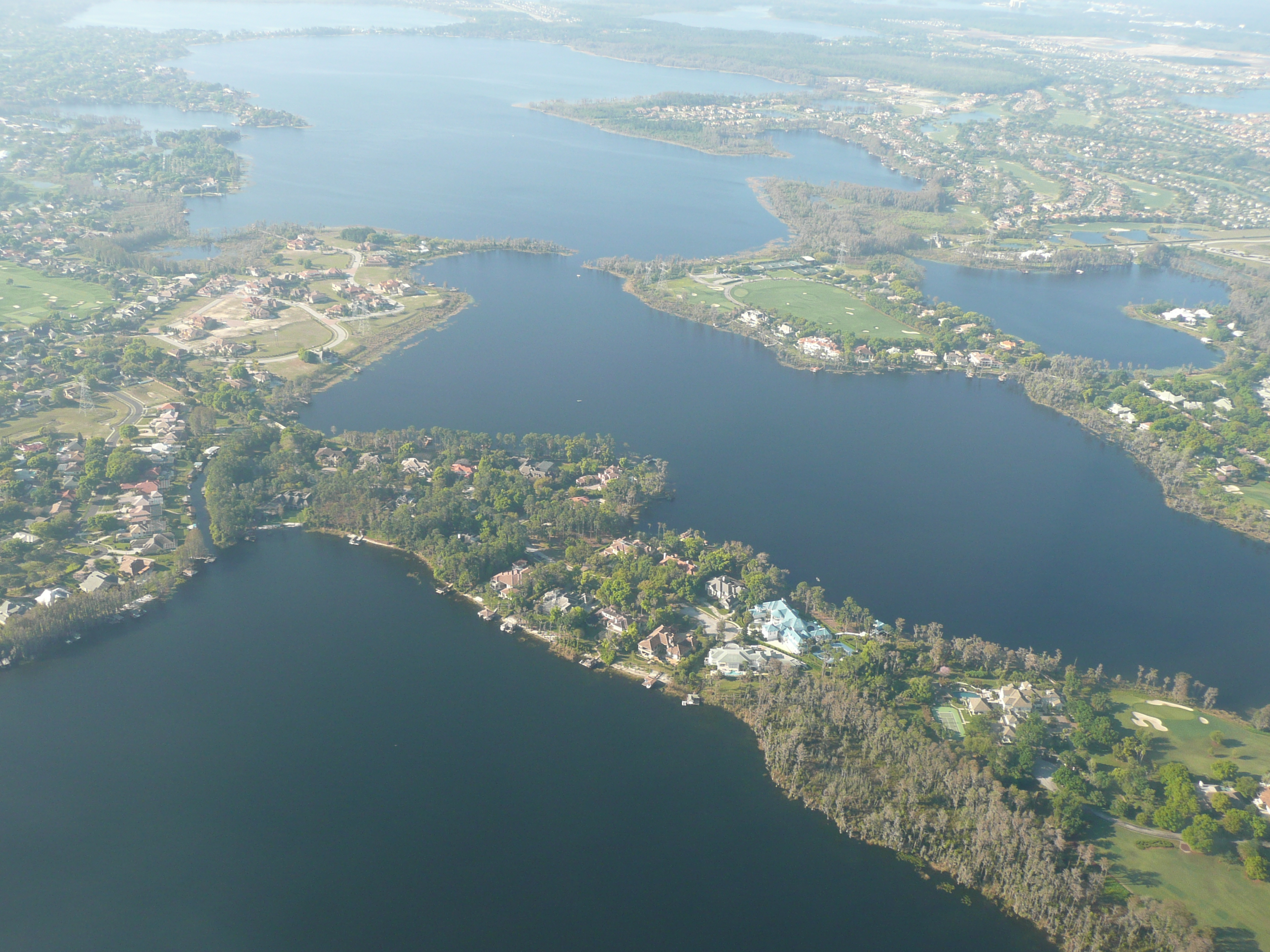 Whether you want to fly straight-as-an-arrow or add aerobatic maneuvers to your flight, taking the controls of a T-6 Texan single-engine advanced trainer aircraft (aka ‘The Pilot Maker’ for being the aircraft used to train United States Army Air Force pilots), or flying a TP-40 Warhawk (aka ‘The American Dream,’ used during WWII) is as exhilarating as it gets. With a certified flight instructor as co-pilot (and the one in control during take-off and landing), ‘trainees’ who have the nerve get the full hands-on experience once they’re in the air.

No one will laugh and point fingers if you choose not to see Orlando from above via this particular vantage point, but if you buck up the courage to try skydiving, you will literally have bragging rights forever. 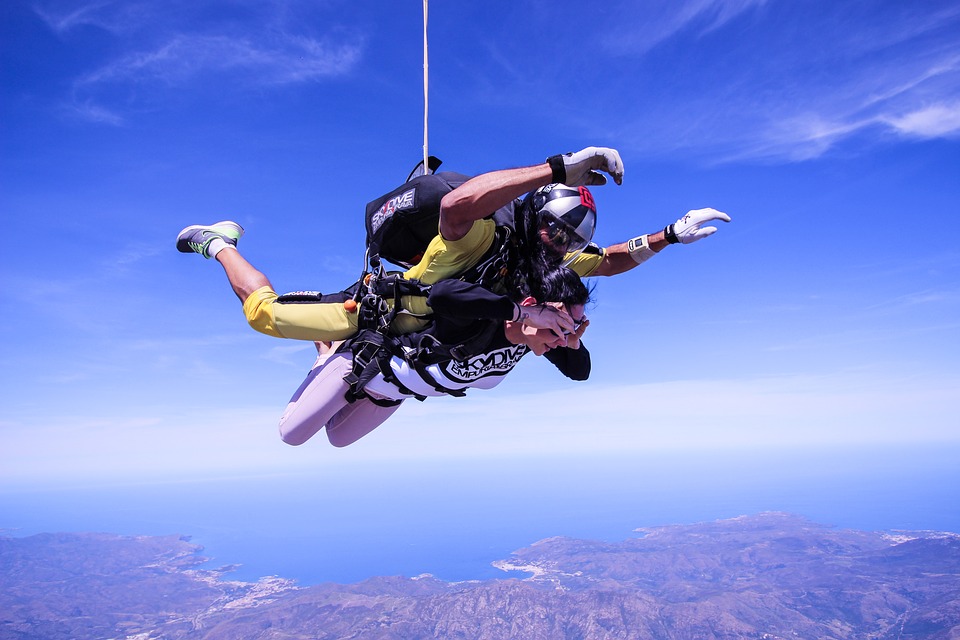 Kit up on closed-toed shoes (no flip-flops, for obvious reasons!), a comfortable shirt without a collar (it’s exceptionally windy up there!), appropriate layers depending on the weather, and leave the jewellery with someone on the ground. Then, take the aeroplane ride up to altitude, remind yourself it’ll be over all-too-quickly, and jump! The next few minutes will be among the most exhilarating of your entire life, and while your knees may knock once you’re back on Mother Earth, we’re betting (small change only) you’ll want to do it again. Perhaps not immediately, but still….!

Too scared to jump on your own? First, we don’t blame you and second, you don’t have to. Book a tandem jump and let a fully-qualified instructor do the work while you enjoy the view. It’s an ideal option for first-timers, and trust us: you still get all the bragging rights for the rest of eternity.

[Shhhh…don’t tell anyone, but if you love the idea of skydiving but go all jelly-legged at the idea of jumping out of a plane, we’ll let you in on a little cheat and point you toward the fab iFLY Orlando indoor skydiving adventure on International Drive. It’ll be our little secret.]

6. The Wheel at ICON Park

Finally, if you want a birds-eye view without giving up your connection to terra firma, there is one more option, and that’s The Wheel at ICON Park (formerly the Orlando Eye, ICON Orlando, etc). 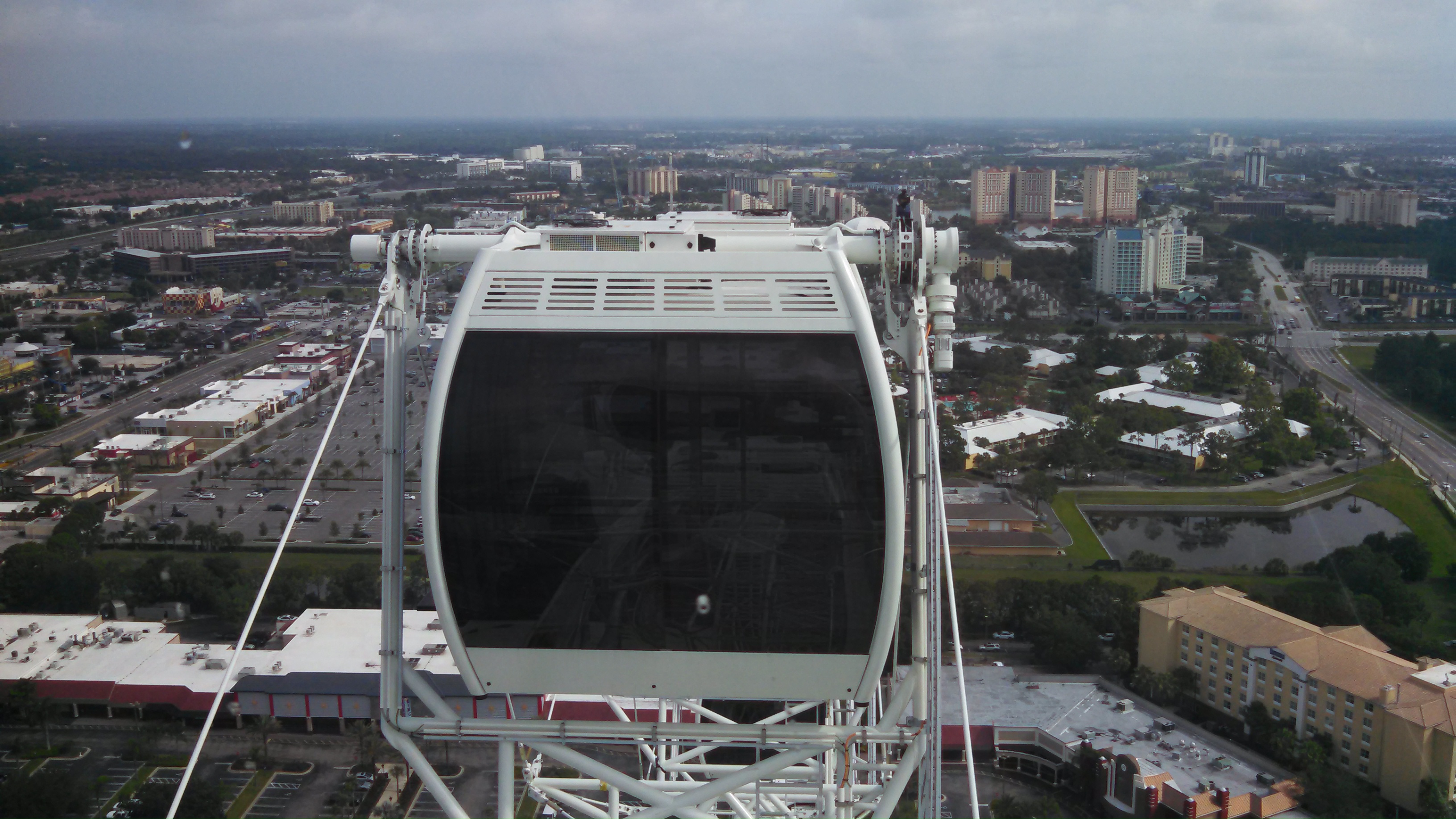 If you’ve taken a “flight” on the London Eye, you have an idea of what this giant wheel feels like. If not, it’s a slow, gentle journey in a circle, which gives riders a view across Orlando, and, on a clear day, all the way to Kennedy Space Center’s enormous Vehicle Assembly Building on the Atlantic coast.

Air-conditioned ‘capsules’ travel to a height of 400-feet during the 23 minute flight, anyone can ride, and tickets are valid for 30 days if the attraction closes due to weather.  We highly recommend purchasing tickets in advance to avoid queuing.

So—how will YOU take to the skies in Orlando?

Have you seen Orlando from an alternative vantage point? Tell us all about it on Attraction Tickets Direct’s discussion forums!