Orlando , Universal Studios Florida , Halloween Horror Nights , Veness Column , Halloween Horror Nights 2013 , Halloween in Orlando
By Susan & Simon Veness
Fog fills the streets, curling into dark alleys and forbidding corners; infernal lights stream red and orange, adding a ghoulish glow to the mist; howls, screams and beastly snarls fill your ears; menacing chainsaw guys appear and disappear sporadically; and, everywhere, blood-soaked zombies prowl in search of new prey.
And that’s all BEFORE you reach any of the eight amazing Haunted Houses at this year’s Halloween Horror Nights presentation at Universal Studios Florida, which has now become an annual event of truly epic proportions here in Orlando from mid-September to November 2.
We were fortunate to be at the big media opening night and all we can really say in summary, is “Wow!” And maybe ‘Wow!” one more time after that. What an extravaganza of gruesome, grisly horror realism. And fun.
Because Halloween Horror Nights, for all its considerable scare factor, is an absolute gem of full-on amusement and humour. It tickles your funny bone while scaring you witless.
Our evening began with a special Q&A session with the principal creators of HHN 23 (yes, it’s now in its 23rd year of fear!), along with film director John Landis (American Werewolf in London and the Blue Brothers, among others) and Resident Evil brand manager John Diamonon.
They set the scene perfectly for an evening of scare-iffic entertainment, with Landis in particularly fine form as he joked about the horror genre, his films – and whether the 1,000 scare-actors are paid a full wage or not! In fact, many of them come back year after year as they enjoy being part of Horror Nights so much and it has become an art form for many of them. They simply live to terrify people!
For those yet to sample the event – or those keen to try – it is a mixture of ‘Scare Zones’ – areas of the park set out in themed, scary style – eight Haunted Houses (inside mazes full of elaborate and highly realistic horror theming, with the ‘scare-actors’ lurking in all kinds of dark corners) and stage shows, including the trademark Bill & Ted’s Excellent Halloween Adventure, a hilarious – if risqué – song-and-dance send-up of pop culture.
Oh, and most of the rides are open, too, meaning you can also enjoy the park in the dark, with the addition of some ghoulish lighting effects, such as Mel’s Drive-In Diner, which becomes ‘Mel’s Die-In!’.
We were given our own ‘RIP’ tour guides to take us around each of the Houses in turn, and here’s what we found: American Werewolf in London: an absolute stunner of a House, full of true replicas of the film, real horror ambience and some eye-popping animatronic special effects with the werewolf. It’s like walking straight through the screen into the movie. The sense of retro 1980s London is also brilliantly re-created. Our rating (out of 10): 11! The Cabin In The Woods: Another horror movie brought to vivid life, this features a walk-through of the ‘Cabin’ where evil experiments lie in wait and various hideous creatures have been released. Again, superb detail and VERY high on the scare factor, including the bloody elevator. 10.

Resident Evil: Escape From Raccoon City: This is the latest video game from the Resident Evil franchise, and another in-depth plunge into its murky realm, with characters like Leon, Jill and the Zombie dogs, while a giant part-human, part-animatronic version of Nemesis lies in wait. 10.
Evil Dead: Based on this year’s remake of the classic 1981 horror film, this takes visitors through another cabin set-up of unexpected twists and turns, with various special effects and gory surprises, including a finale where you have to survive the ‘rain of blood’ (don’t worry, it’s only water!). 10. The Walking Dead: No Safe Haven: Step into the world of the hit TV series (and graphic comic novels) in this House, where the ‘Walkers’ pop out of the darkest corners and the grand finale features a truly terrifying gauntlet of the prison scene – where all the undead inmates are loose. 10. Havoc Derailed: This is one of Universal’s own creations, a variation on a previous theme, whereby you enter a train carrying mutated super-soldiers on their way to prison which, as the title suggests, gets derailed and releases these threatening, gun-toting hulks. Those prison cells can’t keep them all in! 9. 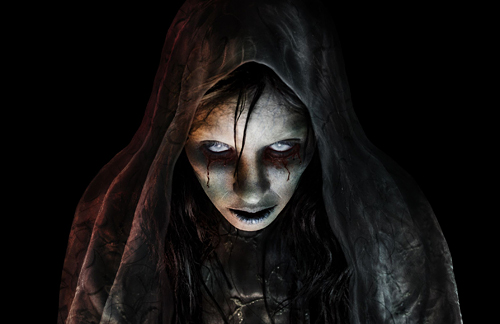 La Llorona: Taking a Mexican urban legend and turning it into another gruesome tale of death and vengeance, Universal have made this arguably the hardest-hitting of their Houses, with dead children everywhere and the ghostly murdering “weeping woman” waiting to add to the misery. 8. After Life: Death’s Vengeance: They love to add a 3-D maze each year and this is it in 2013. Don your 3-D specs and brave the curiously disorientating neon-lit world of the ‘after-life,’ where demons of unspecified proportions are waiting to welcome new inhabitants (and this is a maze you CAN get lost in!). 7.
In addition to each of the Houses, which are located in specially-created back-stage areas of the park, we also wandered through the seven Scare Zones in the main part of Universal Studios itself, using street scenes and numerous other imported props and scenery to create more lurking menace.
This year, each one is themed to The Walking Dead, from Series 1 to 3, and there are specific recreations from the shows, with notable characters like Bicycle Girl – using an amazing actor who is a real-life leg amputee – and Deer Walker. The Survivor’s Camp has been over-run by zombies (or ‘Walkers’ as they should properly be called from the series), while the Fall of Atlanta is depicted in graphic, body-strewn detail and The Farm features the infamous burning barn, where Universal’s creative folks have added such neat touches as smouldering bodies, ash corpses and the smell of burnt flesh!
To cap everything off, there is Bill & Ted’s Excellent Halloween Adventure, the riotous comedy-fest based on the two films starring Keanu Reeves and Alex Winter – and given a knockabout style in 2013 by taking swipes at everything from talking goats on YouTube to TV programmes like The Voice and Big Bang Theory and merciless (but hilarious) lampoons of celebrities such as Taylor Swift, Miley Cyrus, George Lucas, Kim and Kanye and Justin Beiber.
“If you’re offended, just leave,” is the pre-show message, and they mean it! Scantily clad dancers (both male and female) add high-energy pizzazz to the show and there are also pyrotechnics – and more zombies, albeit of a more comic kind.
It completes an evening of huge and exhausting proportions, as each of the Houses builds up LONG queues at peak periods (typically Fridays and Saturdays), and you will be hard-pushed to do all eight, and take in the shows and Scare Zones, too, on a busy night.
Our top tip is to try to visit on a Sunday, Wednesday or Thursday, when crowds are lighter, arrive slightly before the 7pm opening time, and make sure you can stay through to the final hour, when the queues thin out. Go on, we dare you!
For your Halloween Horror Nights experience, check out the Attraction Tickets Direct choice of Halloween Horror Nights tickets!