Toy Story Land: To Infinity And Beyond!

Orlando , Expert View Column
By ATD’s Orlando Experts, Susan and Simon Veness
Disney’s Hollywood Studios just got bigger by 11 full acres, but the real thrill comes from something much smaller: You, shrunk down to the size of a toy. Being the size of a Green Army Man means you’re just the right height to join Woody, Buzz and the gang in Andy’s back yard. And that’s where the serious fun begins!

Toy Story Land, based on Pixar’s blockbuster Toy Story movie franchise, officially opened on 30 June, with a media preview on 28-29 June. During the 2-day event, we had a good, long time to explore the land, ride the new attractions and taste some of the food, so join us in Andy’s back yard, where he has assembled his favourite playthings into new and exciting set pieces.

*Watch the video at the end of this post!*

In your shrunken-down size, Woody appears to be nearly 20 feet tall as he greets you at the entry to Toy Story Land, and if you linger awhile you’ll hear him talk. It’s not easy to be that patient though, as you hear screams of delight coming from just around the bend. 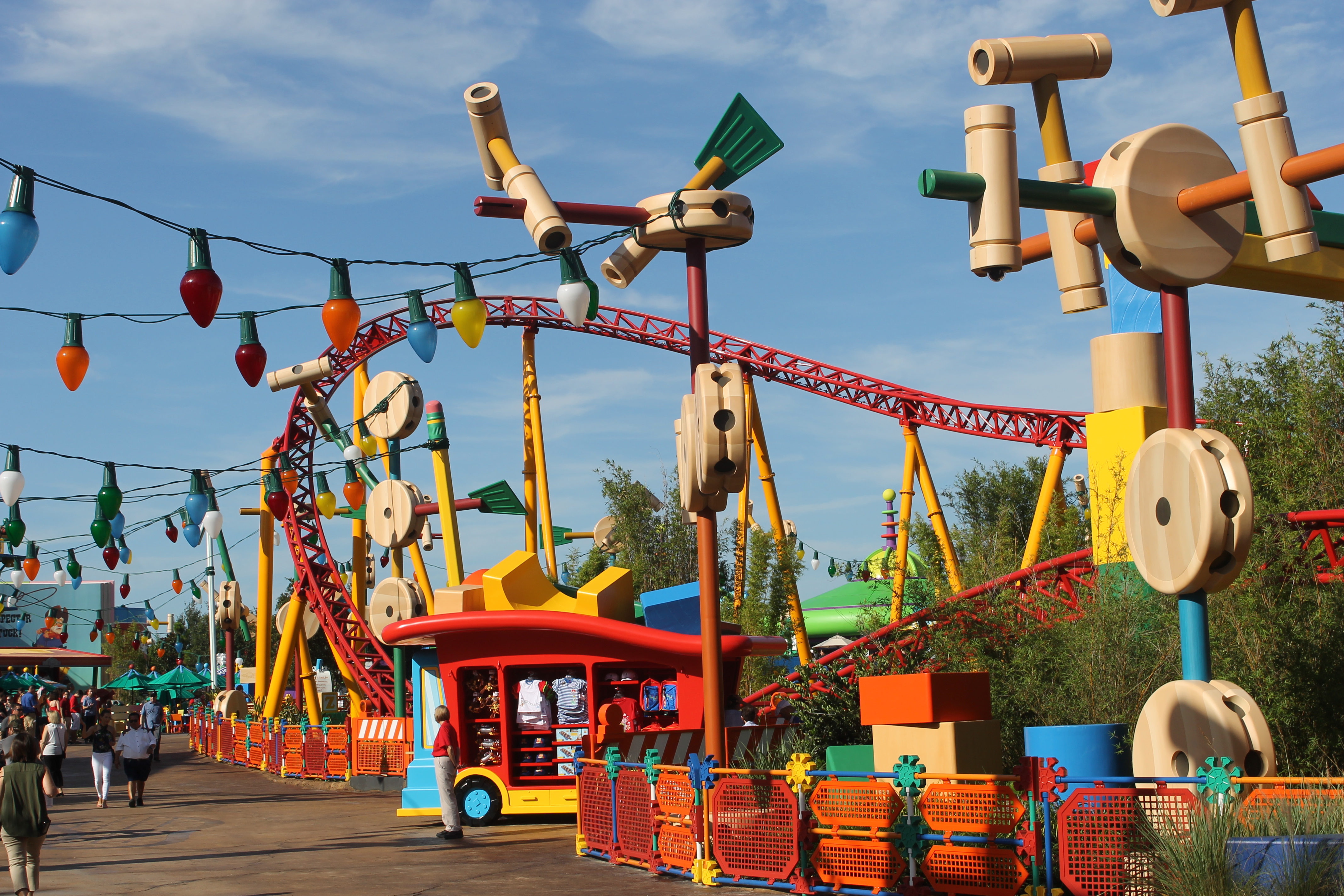 This vibrant new addition to the park takes you straight into the world of children’s imagination, and that becomes immediately clear as you turn the first corner. Andy recently received a Dash & Dodge Mega Coaster Kit as a gift, and has assembled it as the focal point in his back yard. And what better way to create a coaster train for his pals than by using a springy Slinky dog?

But before we take a ride on his spectacular roller coaster creation, let’s explore the land a bit. It is absolutely chock-full of nostalgic toys, from yo-yos and Barrel of Monkeys and scrabble pieces to Cootie (Beetle Drive in the U.K.), Rubik’s Cube, Tinkertoys and K’Nex. Benches are made from Popsicle sticks, dominos and Brio train tracks, while board games and their various pieces are everywhere, with strings of Christmas lights adding a colourful canopy above it all. Andy has also set up his vintage Woody’s Roundup lunch box, with its top propped open by his thermos, so that his toys can grab a bite to eat. Naturally, as honourary toys, you’re able to do the same, and while we’ll be adding a blog devoted to the food shortly, we’ll give you a little taster now. Woody’s Lunch Box features a menu most American children will be at least partially familiar with, though it’s all been kicked up a notch or two. From scrummy Tomato Basil soup to delicious sandwiches, breakfast sandwiches, Tater Tot bowls and decadent “lunch box tarts” (fancy Pop Tarts!), there is a lot to like at this “classics with a twist” quick-service location.

Andy has used items at his disposal to decorate the seating area for Woody’s Lunch Box, including his Green Army Men, some keeping watch on a K’Nex tower, and one holding an Animal Cracker, as well as creating seats made of Babybel cheese. Remember that “childhood imagination” we mentioned? You get a definite sense of it here. 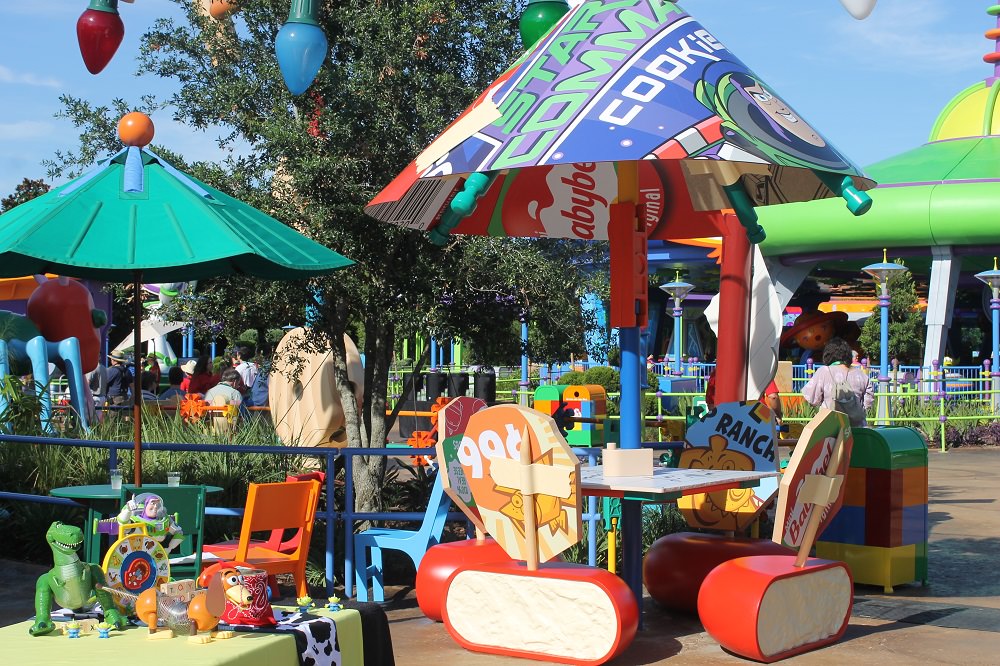 Across the walkway from Woody’s Lunch Box is Alien Swirling Saucers, one of two new attractions in the land. If you’ve seen the movies (and who hasn’t?), you’ll remember The Claw at Pizza Planet, and the cute little aliens all the kiddies wanted to win. Andy has scored a whole playset during a recent visit to the pizza place, and now those aliens are taking you for a swirl (or, more accurately, a spin!) as they pull your rocket ship along with their flying saucers. The ride experience is similar to the teacups in Magic Kingdom’s Mad Tea Party, though a bit less woozie in that you have a central handle to add to the spin. There are a few moments of thrilling G-force and your “route across the universe” follows a dramatic figure-8 path, but the dizzying counter-spin feels more toned down and less tummy tickling. Kids are not going to want to pass this by, especially with Buzz Lightyear towering over the galaxy just outside the ride. 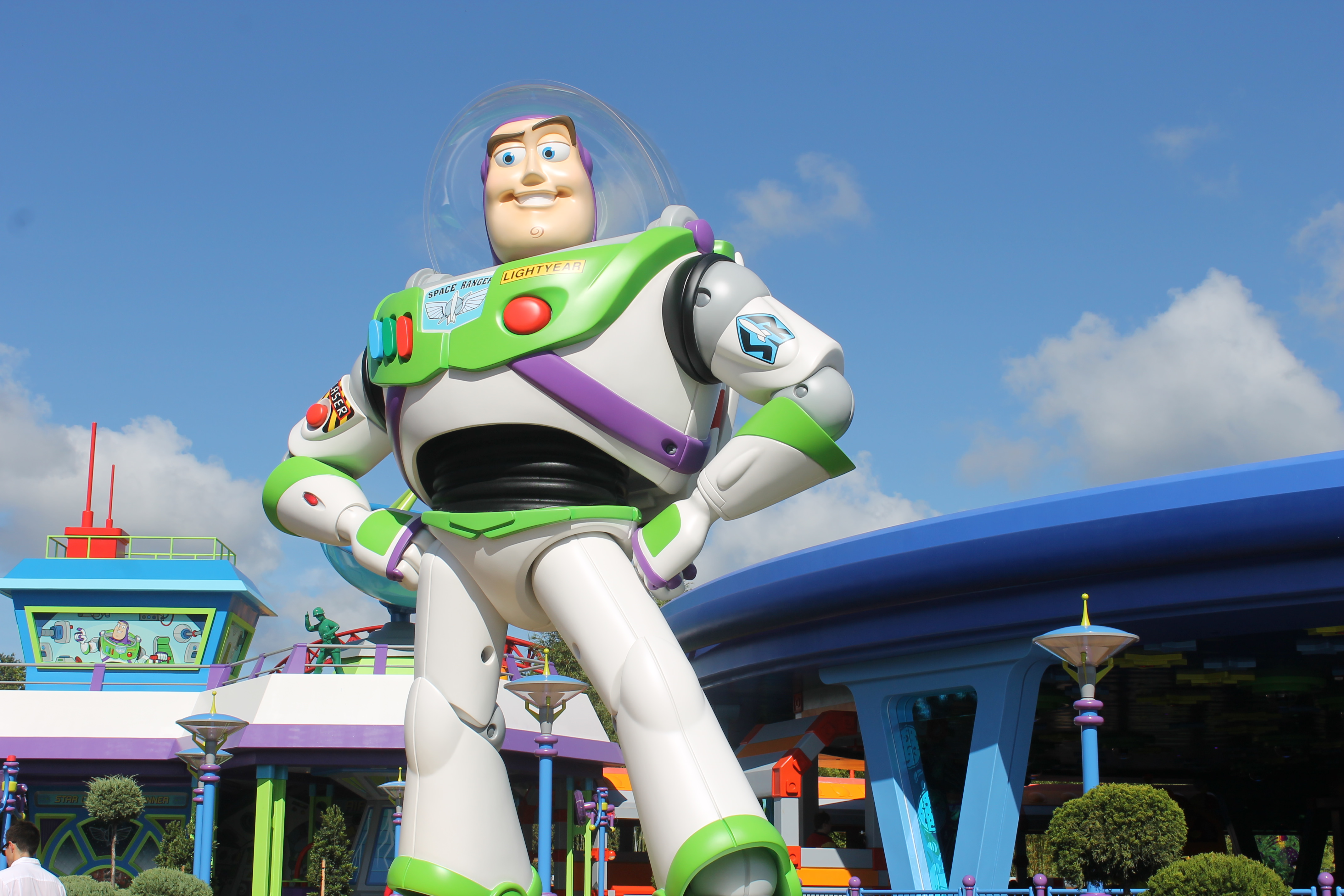 But the first order of business when you reach Toy Story Land is to make a bee-line directly to the absolute stand-out attraction, Slinky Dog Dash. Take your cue from the toy that inspired this ride, and get ready for a twisting, turning, bumping-down-the-stairs coaster that most certainly is not entry-level. Youngsters who have ridden Goofy’s Barnstromer and shouted “More!” are the target audience, along with their older siblings, their parents, their grandparents, and anyone else who loves whizzy coasters that pack a family-friendly punch!

The turns are tight, the camelbacks are outrageously fun, and with two (relatively gentle) launch sequences, this one may take you by surprise. But fear not; if you’re a fan of Big Thunder Mountain Railroad and Seven Dwarfs Mine Train in Magic Kingdom, you’re going to love this one. And don’t forget to return for a second ride at night. It’s even more spectacular in the dark, when you soar high above Toy Story Land and you feel as if you’re zipping around inside a Christmas tree. It’s startling, and it’s beautiful, and there is a surprise ending we’re not going to give away. You’ll have to come and experience it for yourself. In all the excitement, let’s not forget about Toy Story Mania, the long-time guest favourite that opened in 2008. The ride remains the same, but now there are two Standby tracks and a separate FastPass+ track to keep wait times short. It also has a brand new entry leading from Andy’s back yard, through the Carnival Games box, and straight into Andy’s bedroom. 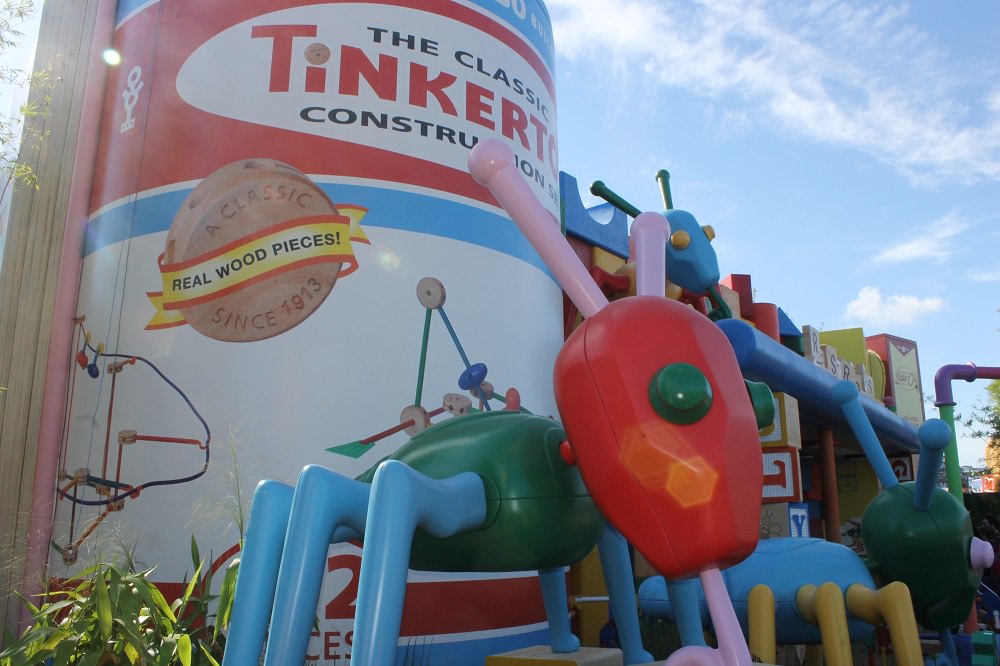 Yes, children are going to adore this land, but so will older kids and adults. The setting is so novel and such a trip down memory lane when it comes to the games and toys we all remember from our childhoods, it’s hard not to walk around pointing at the playthings we most loved and making sentimental noises. And when you’ve zipped along the track with Slinky Dog and swirled with the little green Aliens, we’re certain you’ll come away from the experience smiling, and with more than a little nostalgia.