First Look At Star Wars: Rise of the Resistance

By our Florida Experts, Susan and Simon Veness
Disney Imagineers promised a groundbreaking attraction in Star Wars: Rise of the Resistance, and they delivered all that and more. From the winding pathway leading to a hidden Resistance base to the final outcome of your encounter with the First Order, it is one thrill after another, all wrapped up in a heroic Star Wars story.

Maybe you’re like us, and most of the time you can’t get enough of the information put out there when you’re anticipating a new Walt Disney World land or attraction.  You want to see every trailer, every video, every word written, and it’s all the more magical for knowing what’s in store.

But there are also times when you just don’t want to know. You want it to be a surprise from start to finish, and you work hard to avoid anything that gives the attraction away until you’re able to experience it for yourself.  We get that, we respect it, and we’re giving you early warning there are >>>>>Minor Spoilers Ahead!<<<<<

Take comfort in knowing we won’t give away the whole game, though. That’s just unfair, and you should enjoy the elements Imagineers intended to be surprises, as surprises. But if you’re eager to know the gist of it, here’s our scene-by-scene breakdown, avoiding the finer details that will WOW you when you see them.

The experience starts in a forested area on Batuu (the planet you’re on when you visit Star Wars: Galaxy’s Edge), just outside the Black Spire Outpost settlement, where the Resistance is hiding out. They’re recruiting new members to their cause, and you’ve decided to join them.

Your journey begins as you pass under a large cannon turret and take a pathway through the cave system where the Resistance has their secret base. Rey appears in the briefing room as a hologram transmission, and updates you on your next move. A Star Destroyer is on its way to Batuu, the hidden base is no longer safe, and, with the help of pilot Nien Nunb and Resistance officer Lieutenant Bek, the transport shuttle you’ll soon be boarding will evacuate you to General Leia Organa’s secret base.  Poe will be your escort.

You depart the briefing room and head outdoors, where a transport shuttle awaits. After boarding, Lieutenant Bek greets you, and then, in an incredible feat of technology, your shuttle ‘takes off,’ and when it does, you will believe you’re leaving Batuu and soaring through the clouds. You can see Batuu through the front and back windows, each of which gives you a different view as you enter the vastness of space. But this is a Star Wars story, and, as Lieutenant Bek says, “I’ve got a bad feeling about this!” Sure enough, a squadron of TIE fighters appears out of nowhere.

After an epic battle, you’re caught in a First Order Star Destroyer’s tractor beam. What could possibly go wrong?

The same doors you walked through to enter the shuttle whoosh open, and a First Order officer enters, demanding you disembark. That’s when the jaw-dropping ‘reality’ kicks in: you’re on the deck of a Star Destroyer, and you’re facing three long rows of stormtroopers!

The sheer size of the holding bay is awesome, and sets the tone for the rest of the adventure. New recruits (you and your fellow travellers) are taken to a ‘holding cell,’ and that’s where you first encounter Kylo Ren. He intends to extract information about the secret base, but his deed is interrupted, and while he’s attending to urgent business you’re freed from your prison (in a remarkable way; we’ll leave that for you to discover!) and embark on a daring escape (this is the point at which you board a droid-driven, free-roaming ride vehicle and make your way through the ship looking for an escape pod).

Although you’re in an eight-person ride vehicle, you can easily imagine your group is running through the ship, first evading full-sized AT-ATs, who definitely take notice of you and are ready and willing to stop you in your tracks. Kylo Ren hasn’t forgotten about you, either, and you’ll encounter him again on the deck of the ship, and as you try to escape through the ship’s maze of hallways. Exceptional special effects occur that amp up the menace…and also provide you with a glimmer of hope. 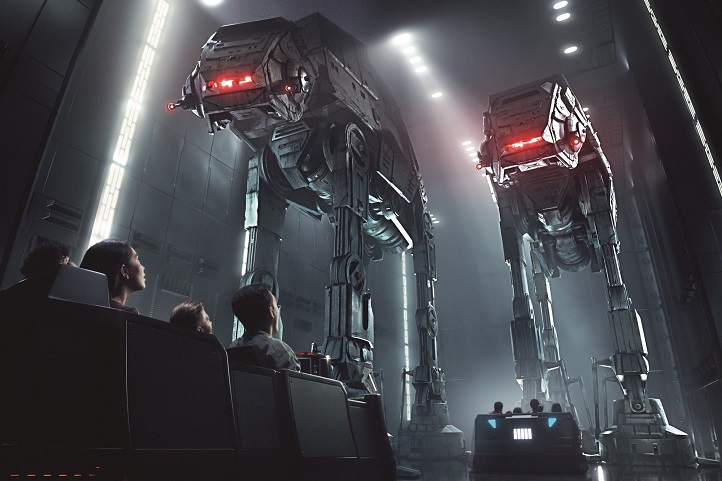 The action takes place all around you, and as you make your way through the Star Destroyer you can see the battle raging in space each time you pass the ship’s massive windows. When you reach the area that holds the First Order’s turbolaser battery, the battle outside takes a spectacular turn. But there is no time for celebration. You’re still not safe, and the battle is not yet over.

At long last you find the escape pods, but just when you think you’re home free, you have one more encounter with Kylo Ren to endure. And one final, thrilling, unexpected twist of fate that could very well lead to success!

The attraction isn’t called Star Wars: Rise of the Resistance for no reason, and, with the help of your fellow rebel fighters, there’s an excellent chance the Resistance will rise again, and you’re going to have a happy ending.  We won’t give that moment away, but if you manage to escape it’s okay to give high-fives all around!

Just as the movie series has enough menace to be ultra-exciting, but not so much that younger viewers are truly frightened, so too does the attraction have tremendous family appeal. Anyone who makes the minimum height requirement of 40 inches will absolutely feel as if they’ve entered their own Star Wars adventure.

We experienced the attraction several times during the pre-launch media event, and each time we saw things we hadn’t noticed before. Also take note, while storyline and the scene sequence are the same, the ride’s path—and your perspective— can be different depending on which vehicle you’re in, so there is serious repeat value here. You’ll want to ride more than once, and we highly encourage you to do just that. Not that you’ll need much encouragement. The first thing we said once the experience reached its conclusion was, “Let’s ride again!” We think you’ll say the same.

Star Wars: Rise of the Resistance opened to guests at Disney’s Hollywood Studios on 5 December, in the Star Wars: Galaxy’s Edge area of the park. The attraction currently does not offer FastPass+.