Celebrating Fourth of July in Orlando

Walt Disney World Tickets , Magic Kingdom Park , Epcot , Orlando , 4th July , Fourth of July , annual events , Epcot , Disney's Magic Kingdom , Walt Disney World , Seasonal Events
By Susan and Simon Veness
It’s no secret the USA is mad on national pride. If you’ve been to the States on July the 4th, you know what we mean. Even the smallest towns have their parades and fireworks, with plenty of family-friendly, flag-waving fun. And, while Orlando knows how to do a great fireworks show, Independence Day celebrations take patriotism one giant step further.
Orlando visitors don’t have to go far to find a party on Fourth of July, but here’s where to find the best of the best:
Walt Disney World is full of patriotic spirit, and it’s also full of visitors. Crowds are heavy, especially at Magic Kingdom, and for a good reason: Disney does spectacular Independence Day fireworks.
Magic Kingdom lights up the sky with Disney’s Celebrate America—A Fourth of July Concert in the Sky. In keeping with Disney’s penchant for fireworks coordinated with music, this display is filled with traditional American songs and plenty of ‘Red, White, and Blue’. The narrative is overtly patriotic, as you would expect, and it’s hard not to feel like a real Yankee Doodle Dandy by the time it’s over. The show takes place at 9pm on July 4, but there is also a ‘sneak peek’ on July 3. Both shows are the same and both are packed to the rafters, so plan to arrive early or you’ll find yourself sitting in traffic with the ‘rocket’s red glare’ in the distance. Trust us on this one (we learned the hard way many years ago). Epcot doesn’t wait until sundown to begin its Independence Day celebrations. You’ll find Mickey and his friends in World Showcase, dressed in traditional Americana outfits, while the spectacular Voices of Liberty a capella group perform three concerts (12.30pm, 1.45pm and 3pm) at the American Gardens Theater, featuring national favourites guaranteed to stir the soul (don’t be surprised to see a few visitors wiping tears away). Voices of Liberty also perform their regular show inside the American Adventure rotunda at 4pm and 5pm, and, of course, the ever-popular Spirit of America Fife and Drum Corps add to the day with several performances along the walkway in front of the America pavilion. Epcot has its regular IllumiNations night-time extravaganza at 10pm, but adds The Heartbeat of Freedom, a 5-minute fireworks finale, at the end, capping off a perfect Fourth of July full of national pride.
Disney’s Hollywood Studios isn’t left out on such an important day, starting with their Rockin’ Fourth of July Celebration at 6pm, featuring a DJ and live music by Mulch, Sweat, and Shears in front of the Sorcerer’s Hat, and the day ends with a 10:15pm fireworks display set to rock and roll music.
BRIT TIP EXTRA: Don’t forget to pick up a small hand-held flag-on-a-stick at Wal-Mart, Target and many other shops, to wave during the fireworks! SeaWorld is well-known for acknowledging the sacrifices made by the U.S. military and her allies around the world, and that patriotic spirit comes to the forefront with their Fourth of July Celebration at SeaWorld fireworks display. As an added bonus, those who book Dine With Shamu will receive premium seating at SeaWorld’s newest night-time show in conjunction with their Summer Nights programme, Shamu Celebration: Light Up The Night. Guests will then have a view of the fireworks from the Bayside Stadium once the show ends.
Celebration is ‘Independence Central’ in a Norman Rockwell version of small-town America, and, while most towns around the country will have their own fireworks displays, parades and events, Celebration does it with great style. Each Fourth of July this Disney-designed town has a themed event, with this year’s theme being A Sci-Fi 4th of July. The event includes a sci-fi movie themed costume contest, live music, dancing, special areas for kids (including a fun bouncy castle) and, of course, a tribute to our Veterans. 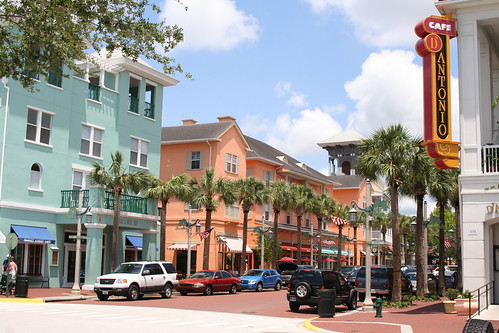 The celebration is family-focused, with a KidZone for youngsters, jousting for older kids, face painting, and more. Food is plentiful and there are some terrific restaurants worth booking if you’d like to make a day of it (bearing in mind coolers and glass bottles are not allowed in Town Center during the event).
As much fun as the event itself is, the fireworks display once the sun goes down is even more impressive. Taking a page from the Disney playbook, Celebration’s night-time display is spectacular. Even better? You won’t have to fight massive crowds to get out when it’s all over.
Parking and admission are free (there is a small fee for some elements), and while you will find a fair bit of parking throughout Celebration, spaces go quickly. But don’t worry; they’ve been doing this long enough to know crowds will be heavy, so visitors can pick up the free park-and-ride shuttle from 215 Celebration Place, just off Highway 192 and not to be confused with Celebration Avenue and Water Tower Place, which most visitors associate with the entrance into Celebration.
BRIT TIP EXTRA: Many U.S. citizens will spend the day in their back garden, at a local park, or at the beach before heading out for a fireworks show, and the food of choice is nearly always a barbeque. If you’re staying in a villa and want to celebrate like an American, it’s all about burgers, hot dogs, ribs, or chicken on the barbeque, with potato salad and coleslaw for side dishes, and brownies and watermelon for dessert.
Want to get away from the crowds and enjoy the natural wonders this country protects so fervently? Head over to Sanford, just 30 miles north of downtown Orlando (about 30 minutes from International Drive). Take a morning kayak tour along the Wekiva and Saint John’s rivers, have an airboat ride on Lake Jesup or make a picnic in a park, then visit Downtown Sanford (about as close to authentic ‘small-town America’ as you’ll find in Central Florida) for Star Spangled Sanford, starting at 5pm. Sanford celebrates with live music, children’s areas and splash fountain, plus games and activities for the whole family. The popular Willow Tree Café (known for its excellent German food) serves up hamburgers to enjoy while you’re wandering, and if you have a bit of extra energy you can even tour the charming downtown and marina on the LIMO multi-person party cycle (hilarious!). Fireworks take place at 9.15pm.
Don’t forget to wave those American flags!