Walt Disney World Tickets , Orlando , Fun , Expert View Column
By ATD’s Florida Experts, Susan and Simon Veness
Whether you’ve returned home after your Orlando holiday and you’re looking at your photos, or all your favourite Pinterest accounts are full of Mickey, Cinderella Castle and the Tree of Life, there’s something about looking at the scenic side of Disney that makes your heart beat just a bit faster.

You’re swiping your way through Facebook or Twitter and a picture of Spaceship Earth or Pluto meeting an assistance dog goes whizzing by. It’s the carrot no Disney fan can ignore. What is it about the park photos that makes otherwise normal people go all gooey? In part, it’s the memories we make, but it’s also the intentional artistic touches that make Disney parks so scenic. 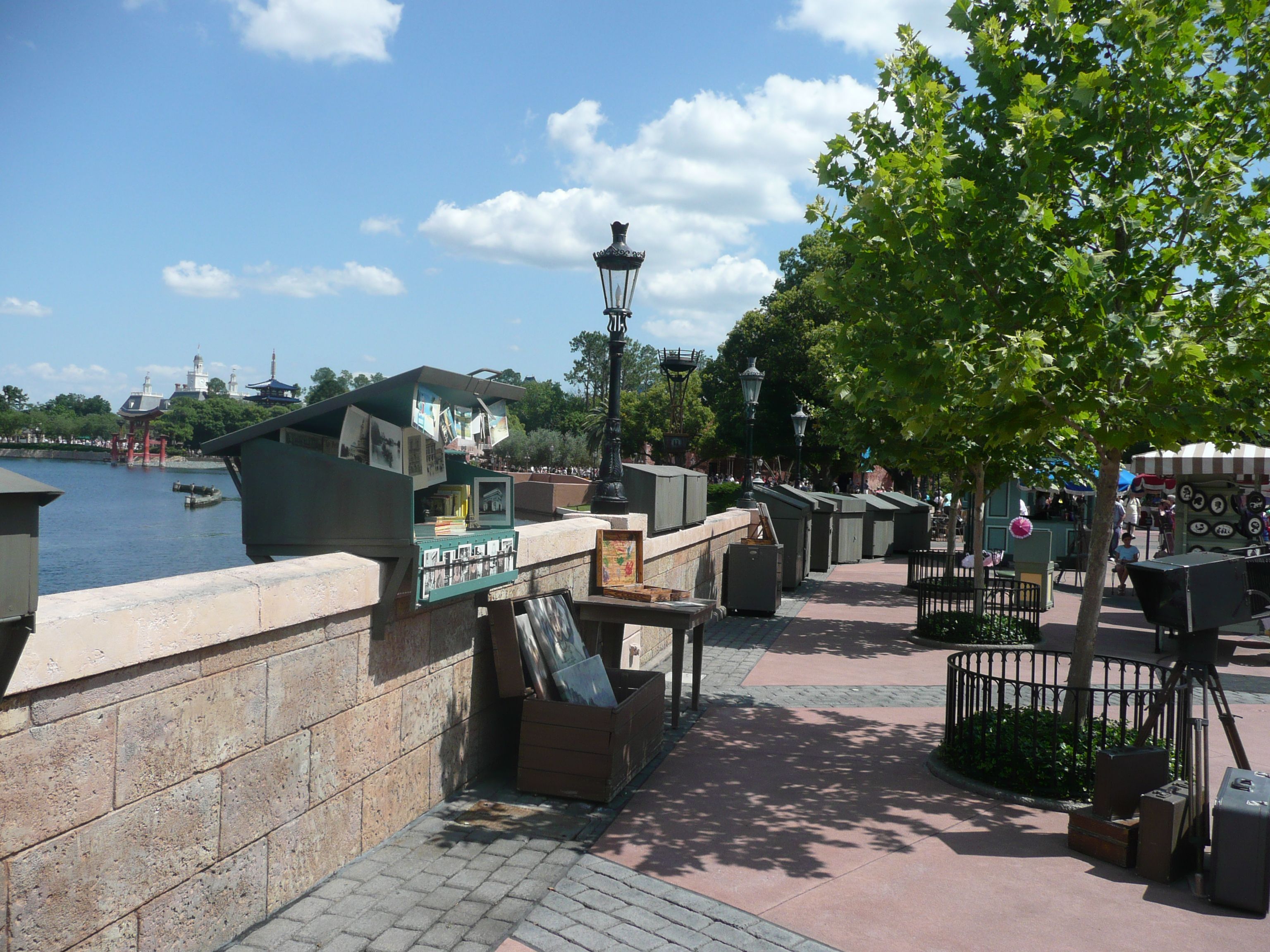 Disney’s creativity comes from taking something that could be real and making it larger than life; bigger, brighter, and more ‘magical’.  Let’s pull back the layers of that creative storytelling for a look at how those stories are told, from the large-scale to the small and subtle.

Large scale settings: You can’t miss the introduction to the story being told when that introduction is a 40-foot tall Fender Stratocaster guitar, or a 199-foot tall haunted hotel, or a massive tree carved with 325 mammals, birds and reptiles. But you can miss big stories being told in places like Maharaja Jungle Trek in Disney’s Animal Kingdom and in the Echo Lake area of Disney’s Hollywood Studios. This quiet, large-scale storytelling is extremely effective when it comes to putting guests into a “place.” You know immediately that you’re in a unique setting, even if you aren’t exactly sure what that setting represents. Let’s look at two examples:

Through the use of giant murals in Maharaja Jungle Trek, the Imagineers tell the story of the maharajas that lived in the now-ruined royal hunting palace. They detail how the princes valued material goods over the natural world, created an imbalance with nature, fled from the destruction they caused, and finally, came to terms with nature again. That’s a lot of story in just 4 relatively simple panels! 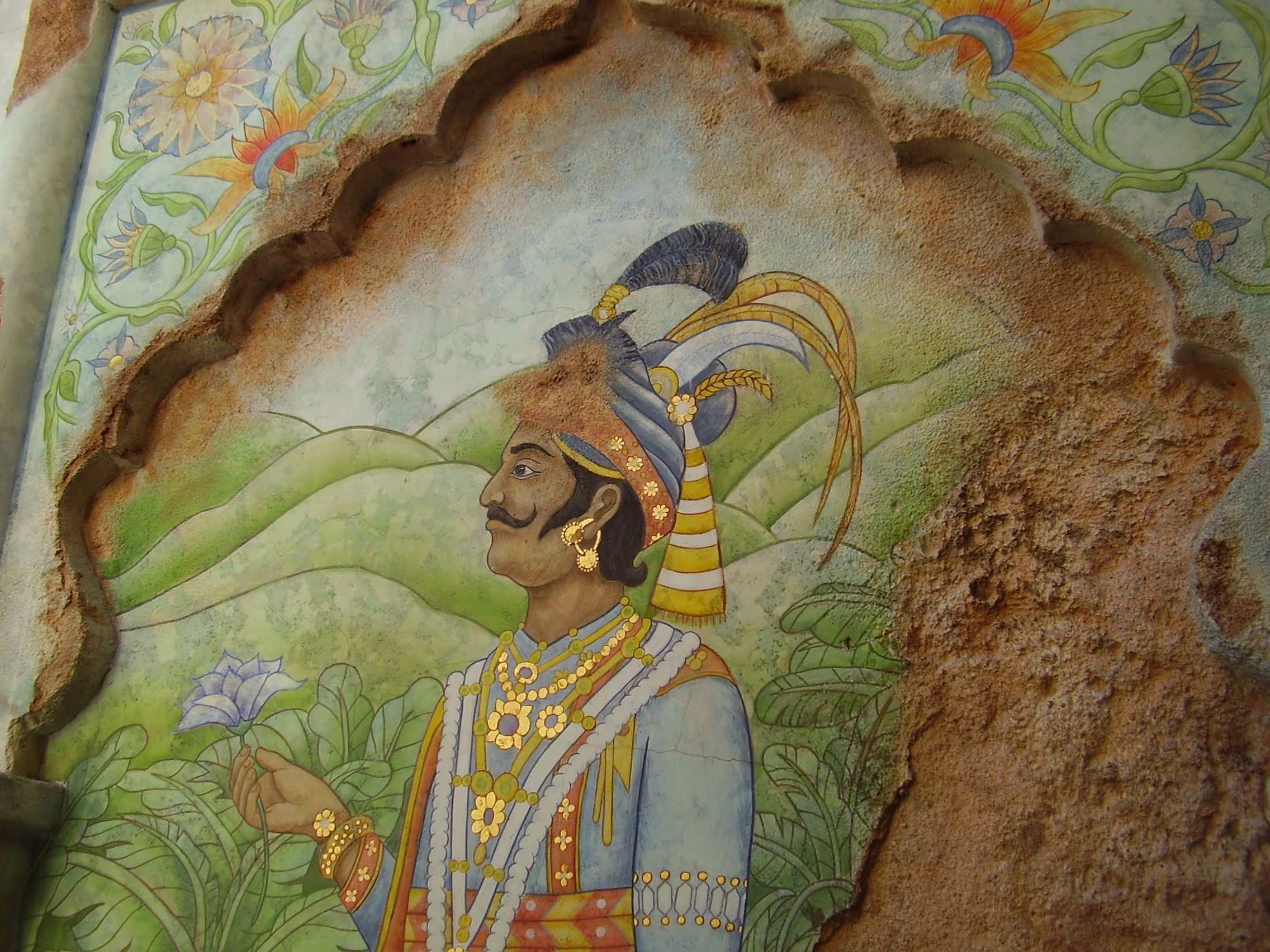 Echo Lake is even larger. In fact, it’s an entire area. But the story here is far more obscure than in other large areas, such as the countries around World Showcase at Epcot or the individual lands in Magic Kingdom. Echo Lake seems more like a setting than a story, but in fact, it refers to a specific place and the elements that go along with that place.

This story takes you to Echo Lake, California, just south of Lake Tahoe, which was the on-location film set for several Hollywood movies. The park’s Echo Lake features the icon, Gertie the Dinosaur, an example of the 1920s and ‘30s architectural style dubbed “California Crazy.” Gertie also pays tribute to vaudeville actor, Windsor Mackay, whose cartoon version of the friendly Apatosaurus was one of the inspired Walt Disney to create the multiplane camera. 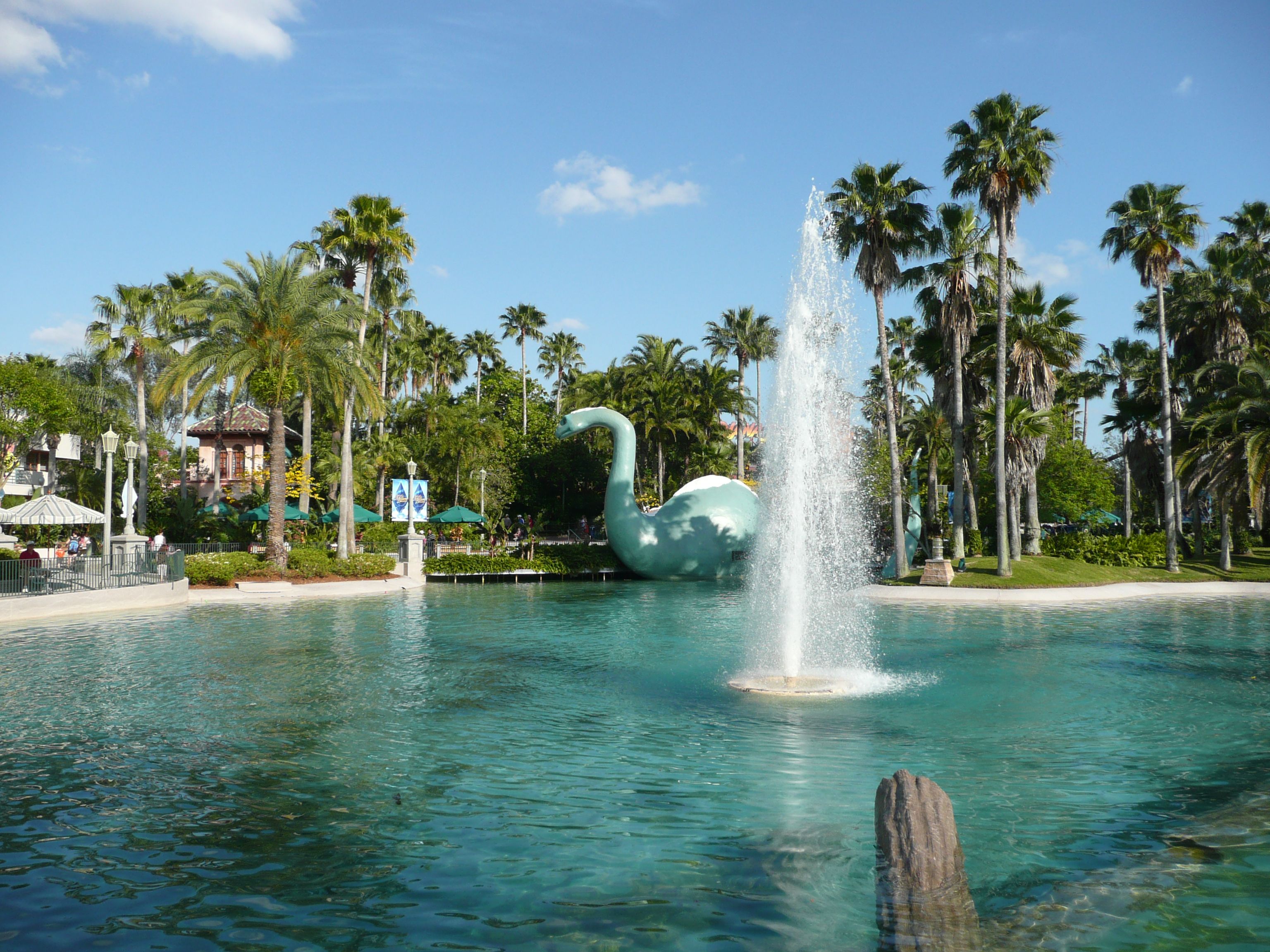 Smaller-scale “place-making”: Remember the layers we mentioned earlier? Peel the large-scale elements away and you come to the next layer, which tells a story of its own within the larger story, through settings that are visually obvious, but their meaning or purpose may be somewhat obscure.

All day long, guests walk past a superb example of place-making in Maharaja Jungle Trek, where a vignette designed to blend a modern drinking fountain into an ancient place tells a real-life story while remaining appropriate to the setting’s use. The large vessels placed around the water fountains tell the story of villagers who supply their homes with water by catching the drips from the village water tap. As each vessel is filled, a villager will move a fresh one into its place, giving everyone a fair shake at the water supply while also conserving a precious commodity. 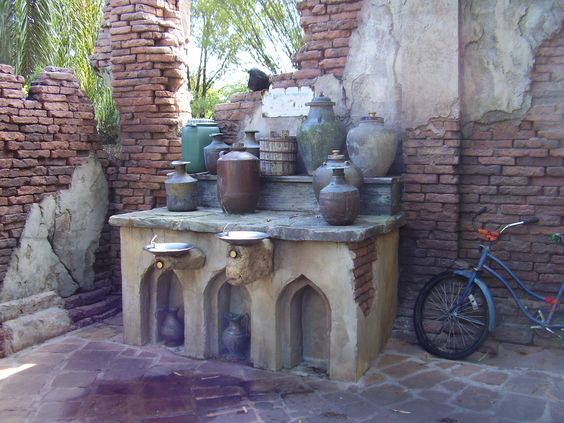 Another example is found at Magic Kingdom’s Storybook Circus train station. As you exit the train and walk toward Storybook Circus, you’ll find suitcases covered in destination stickers, and watering buckets with names like Prissy and Gaddy—and Dumbo. This vignette is a reminder of both the transportation element of the area (the train you just rode) and one of the area’s themes (the movie, Dumbo). Since some of the props around the train station move around now and then, you may find other references to Disney short films and feature-length films, indicating you’re now in the world of Disney animation. 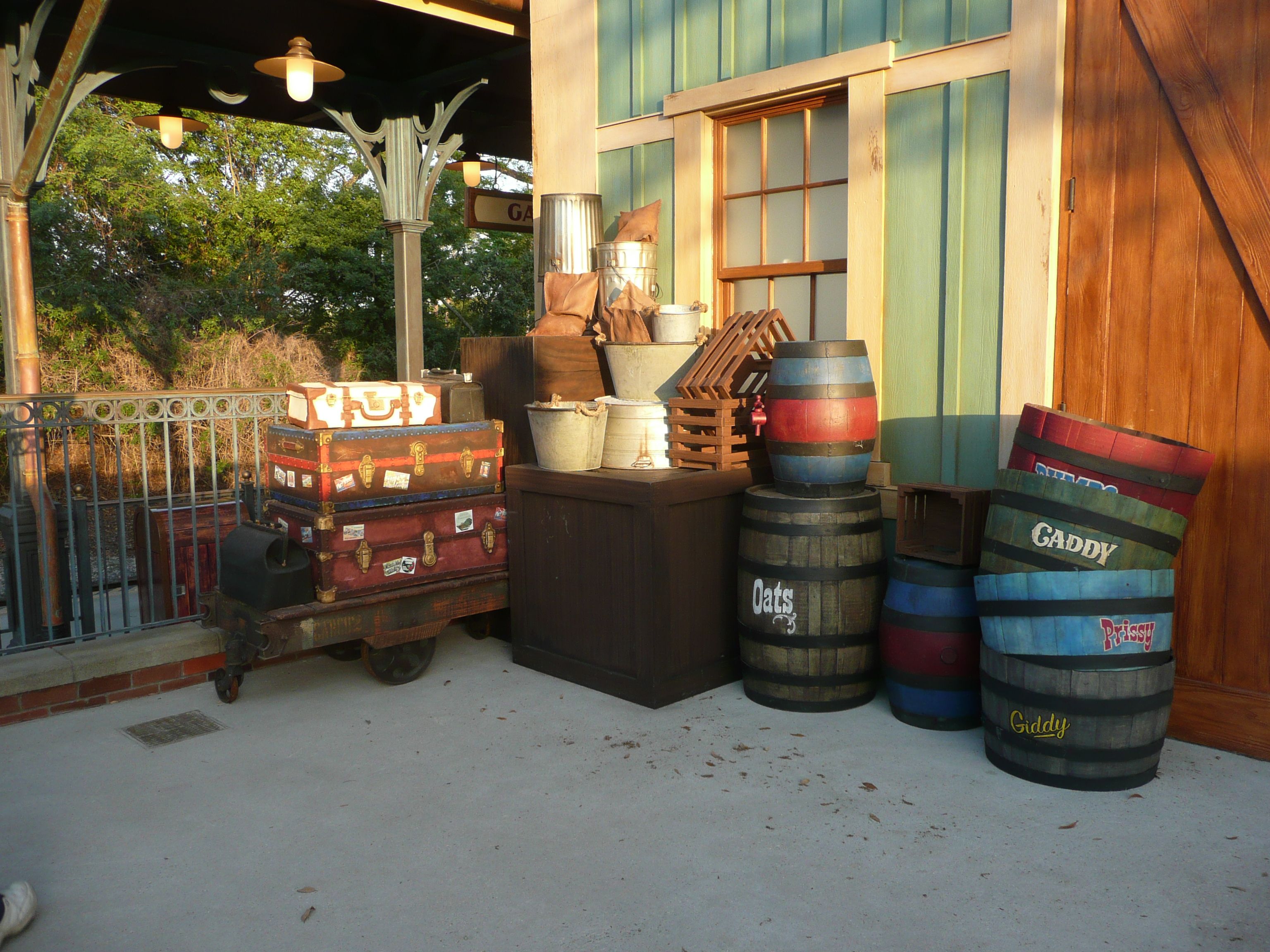 Stories told through the smallest of details: Now we’re down to the nitty-gritty. Even though it’s the smallest form of storytelling, it is no less effective. The only question here is: are you going to slow down and look?

As you walk through Adventureland in Magic Kingdom, a large sign over a restaurant courtyard tells you you’re entering the Skipper Canteen, where the Jungle Cruise skippers take their meals. The dining rooms tell you you’re in the former home of Dr Albert Falls, which included the former meeting place of the Society of Explorers and Adventurers. But we’re talking about small details now, and there are plenty to discover throughout the canteen.

Take a look at the bookshelves between the main mess hall and the secret S.E.A. Room. The spines of each book add to the story, and some of them are humorous (fictional) titles or author names. Each advances the story of the canteen’s former life, including the book, Rockefeller, Hippo, Pet, Family by Albert Falls, and the title Another New Year by M.A. Pleasure, former owner of the now-defunct Pleasure Island and founder of the much-mourned, long-gone Adventurers Club. 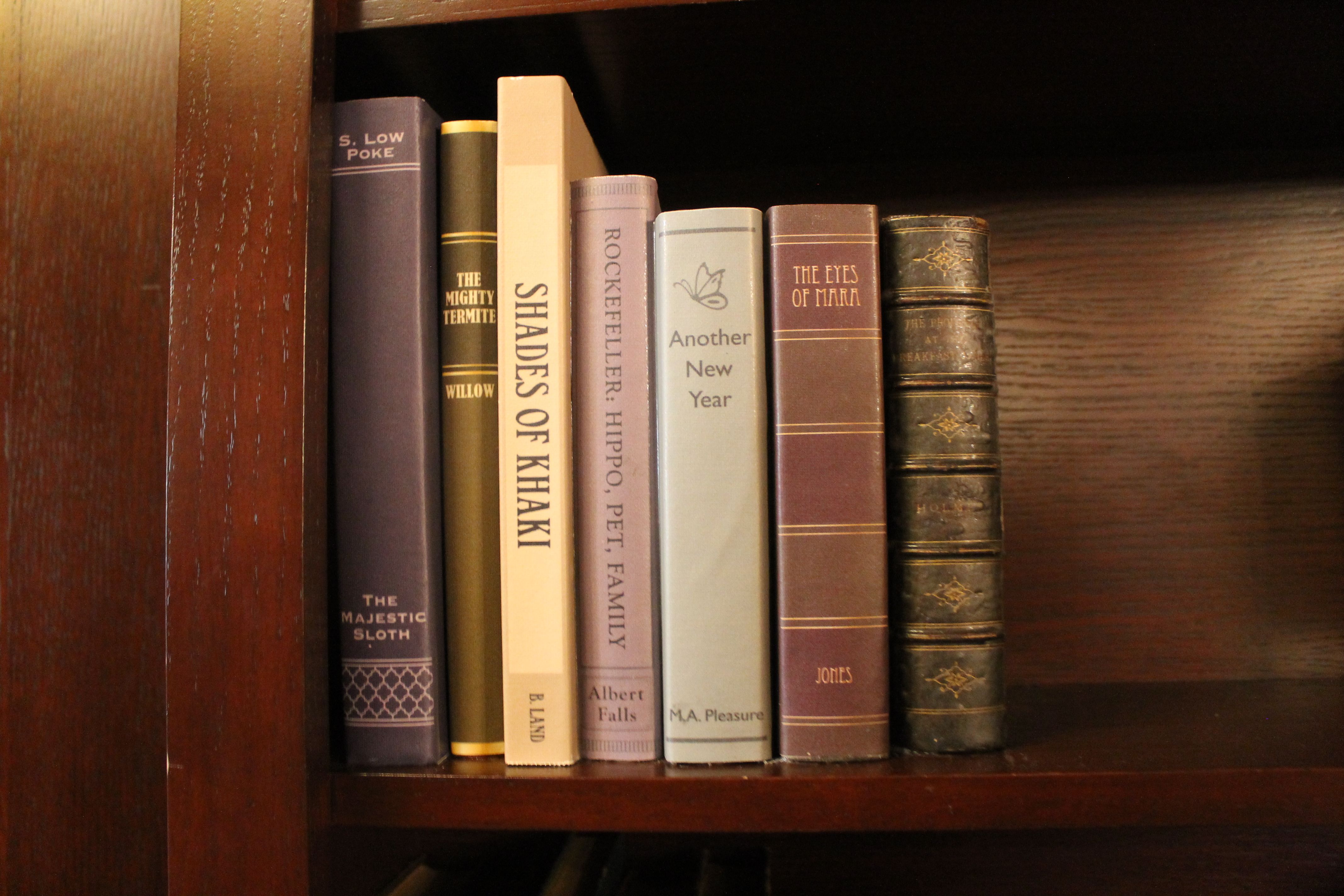 But nowhere are the small story elements more beautifully told than in Twilight Zone Tower of Terror at Disney’s Hollywood Studios. The scene-setting begins outside, where it becomes obvious something awful has happened. You enter the hotel lobby and notice it has been left exactly as it was when that awful thing occurred. But look closer and you’ll see the individual stories the attraction is based on, told through elements as small as a pair of wire-rimmed spectacles, a metal toy robot, and an infamous cookbook titled, To Serve Man, all indicating episodes from the 1960s television show, The Twilight Zone. 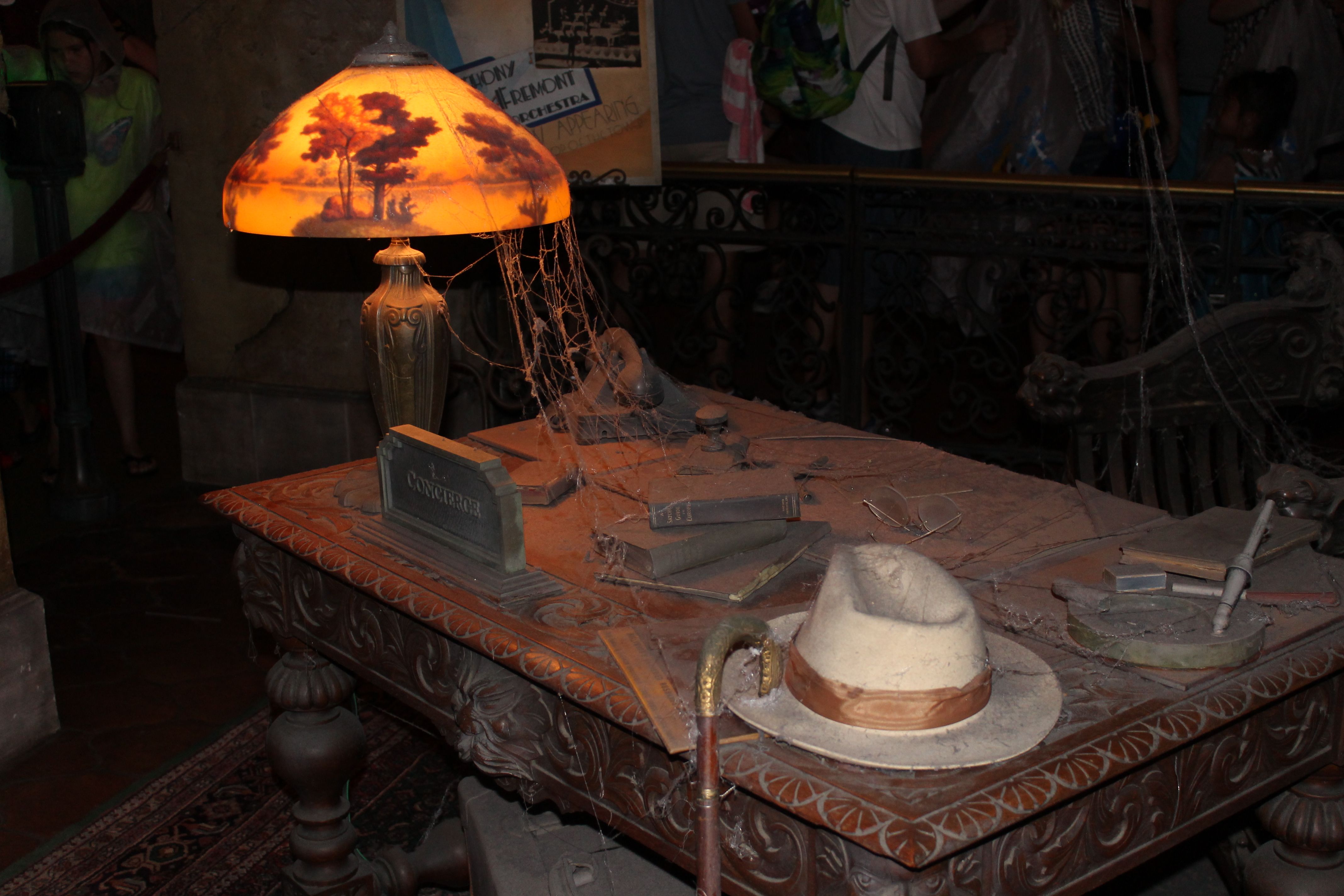 This layering of story elements fills the Walt Disney World parks, and spills over into the water parks, resort and Disney Springs. Next time you’re flipping through your pictures or scanning the internet for your Disney photo fix, see if you can spot the three distinct devices the Imagineers use that make it hard to look away.

Are you a Disney fan who loves to discover the details and the backstories in the parks? The Hidden Magic of Walt Disney World may be just your kind of read!

Join us on Attraction Tickets Direct’s discussion forums for all things Orlando!