Take to the Skies on Disney Skyliner!

By ATD’s Florida Experts, Susan and Simon Veness
It’s easy to get around Walt Disney World using dedicated boats, buses, monorails and Minnie Vans, but now there’s an exciting new transportation system that takes guests from Point A to Point B with a spectacular birds-eye view. Enter, the Disney Skyliner aerial gondola system!

Walt Disney World Resort opened its Skyliner gondolas to guests on 29 September, and we were honoured to attend a pre-opening dedication ceremony for a sneak-peek at this ultra-scenic transportation option that is as much an attraction as it is a means of travelling between resorts and theme parks.

Disney Ambassador Stephen was on hand for the big celebration, and he explained what the Disney Skyliner is and where it goes: “This system connects four of our Disney resorts to two of our theme parks. If you’re staying at Disney’s Art of Animation Resort, Disney’s Pop Century Resort, Disney’s Caribbean Beach Resort or, in December when we open Disney’s Riviera Resort, you’ll have access to the Disney Skyliner which will take you to Disney’s Hollywood Studios and EPCOT.”

Trevor, the General Manager for Walt Disney World Transportation, also shared some insights, telling us Disney researched gondola systems all over the world to ensure their own system placed the focus on guest safety, comfort, and the weather conditions found in Central Florida.

Prior to the Disney Skyliner opening, guests wondered if Orlando’s summertime heat and humidity would make the journey in an enclosed gondola without air conditioning too hot. We’re here to tell you that is NOT going to be a problem! An innovative air-flow system featuring a set of fins over the screened windows at the front and back of the cab, along with vents on the floor, are designed to funnel a welcome breeze into the ride space, and we found ourselves laughing at our “skyliner hair” as it wafted around while we rode. Far from being hot, the cab’s interior was actually quite refreshing, and made the trip even more enjoyable.

The windows throughout the gondola are also specially ‘wrapped’ with a tinted effect to help keep the sun out while still providing an excellent view of the areas guests ‘fly’ over. The whole experience was so pleasant we chose to go around each route twice!

Helpful Hint: Want to share your adventure on social media? For the best photos or video, hold your camera right up to the window and you’ll avoid getting any glare in the shot.

Okay, we hear you say, but what about those afternoon thunderstorms Orlando is known for? Don’t worry. The gondolas can fly in the rain, and if conditions such as lightning are nearby, a pause in boarding will occur until it’s safe to load up and get moving again.

Will guests using wheelchairs or scooters be able to ride? Yes! Every gondola can accommodate a wheelchair. Cast Members at boarding are able to implement a special designator that lets the system know any given gondola’s riders need a little bit more time to board or depart, and there is no disruption or need to ‘hurry things along.’ The Disney Skyliner boasts the most efficient disabled-friendly loading and unloading system we’ve ever seen.

Those are the technical details, but what is the ride experience like? We could throw around adjectives like ‘pleasant,’ ‘smooth,’ ‘relaxing’ and ‘fascinating,’ but while it is all of those things, we’re going to cut straight to the chase and call it ‘fun!’ There is a lot to see from your lofty position, including some of Walt Disney World’s beautiful green spaces. And we think that’s going to take many guests by surprise. It’s obvious the gondolas travel over and along-side road systems, but once you’re ‘airborne’ you’ll also see ponds and streams; forested areas and lakes; and if you ride as the sun sets, you’re in for a spectacular treat! 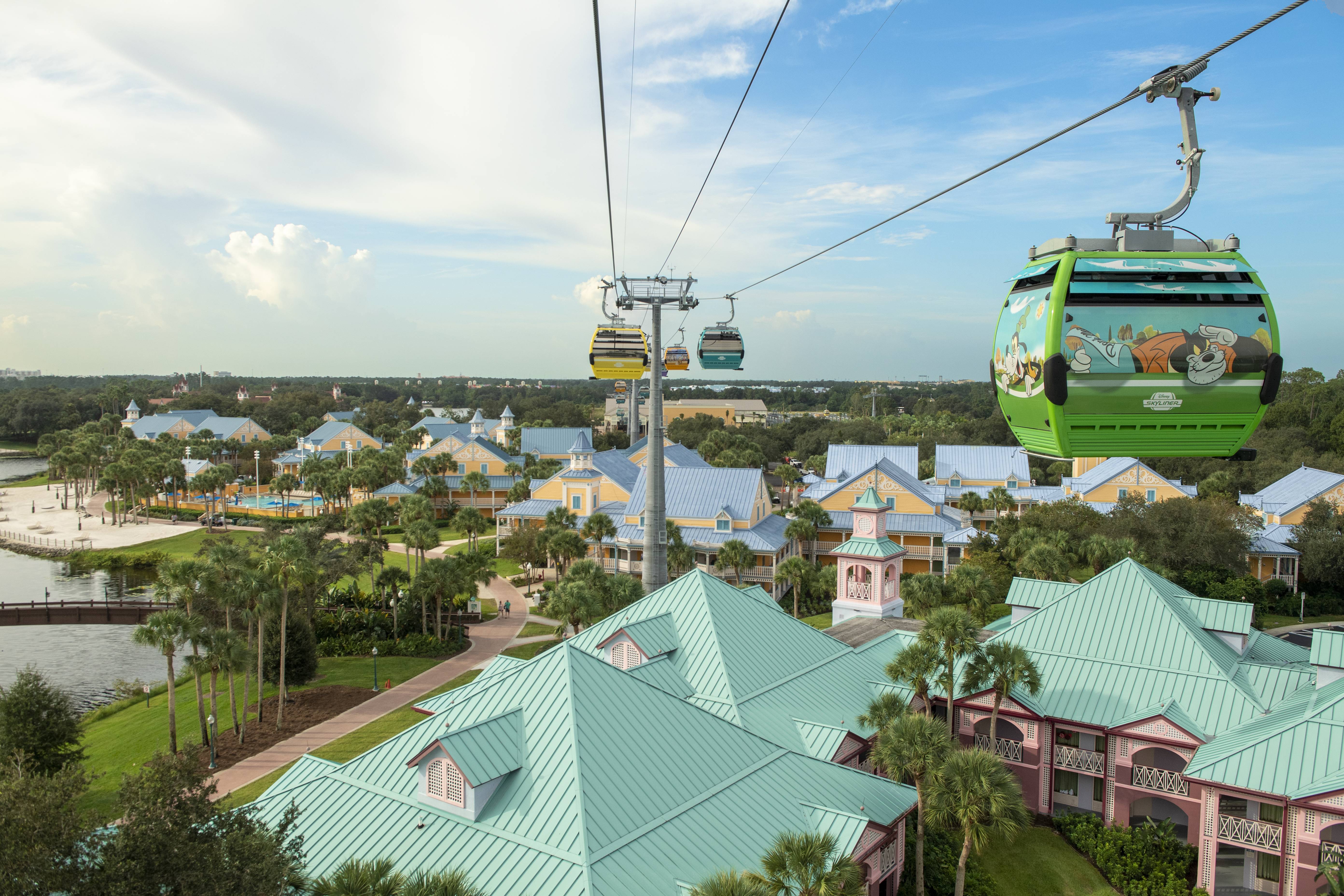 Each route is different, and, for us, the visual highlights were the wooded area along Disney’s Caribbean Beach Resort to Disney’s Hollywood Studios route, which acted as a peaceful buffer before or after a busy day in the park; the section along the EPCOT route that offered a view of Buena Vista Drive and made us feel like we were on the transportation version of FastPass+ rather than being in the Standby lane; and the spectacular low-level flight over Hourglass Lake, between Disney’s Caribbean Beach Resort station and Disney’s Art of Animation Resort station. Superb!

Helpful Hint: Fun snippets of narration tell riders what they’re seeing as they fly over certain landmarks along the way.

But what if you’re not staying at one of the resorts on the gondolas’ routes? Fear not! They’re open to all guests visiting Walt Disney World, and we highly encourage you to use them to travel from EPCOT or Disney’s Hollywood Studios if you’d like to try one of the restaurants at a resort on the system’s routes, as a mid-day break from your theme park touring, or just to enjoy the spectacular views by day or by night. Not only are they a novelty, they’re also a chance to pause for a little while, with time off your feet, and catch your breath again before diving back into the theme park excitement.

We think the most adorable item, though, is the bright red, gondola-shaped mug featuring Mickey Mouse and Minnie Mouse on one side, Pluto and a bluebird on another side, and those mischievous chipmunks, Chip and Dale on a third side. Totally gift-giving worthy, too!

There is no doubt the Disney Skyliner adds a thrilling, dynamic visual from the ground, but when you take flight onboard a gondola, the experience is simply breathtaking!

Ready to experience the Disney Skyliner for yourself? Click here to browse our tickets to Walt Disney World Resort in Florida now.