The Ultimate Guide to the 6 Walt Disney World Resort Parks

A handy park by park guide
Want to experience the magic of Walt Disney World Resort? Here’s what you need to know before you go…

Before you get planning, take a look at this video which is a great starting point for planning your Walt Disney World holiday... When you think of Walt Disney World Resort, one of the first things that comes to mind is probably the iconic Cinderella Castle. The stunning centrepiece of the park is not only a great selfie spot, but a Disney landmark that has the ability to induce a warm fuzzy feeling in every guest that walks through the gates! The Magic Kingdom Park was also the very first park to open at Walt Disney World Resort, which we think makes it a great place to start. This is the place where you’ll find some of the most famous Disney rides, like Space Mountain, Big Thunder Mountain Railroad, Haunted Mansion, Pirates of the Caribbean (did you know this attraction actually inspired the movie?) and of course- It’s a Small World. There’s also lots of family-friendly attractions that the little ones can enjoy, like Peter Pan’s Flight, Dumbo the Flying Elephant and Buzz Lightyear’s Space Ranger Spin. 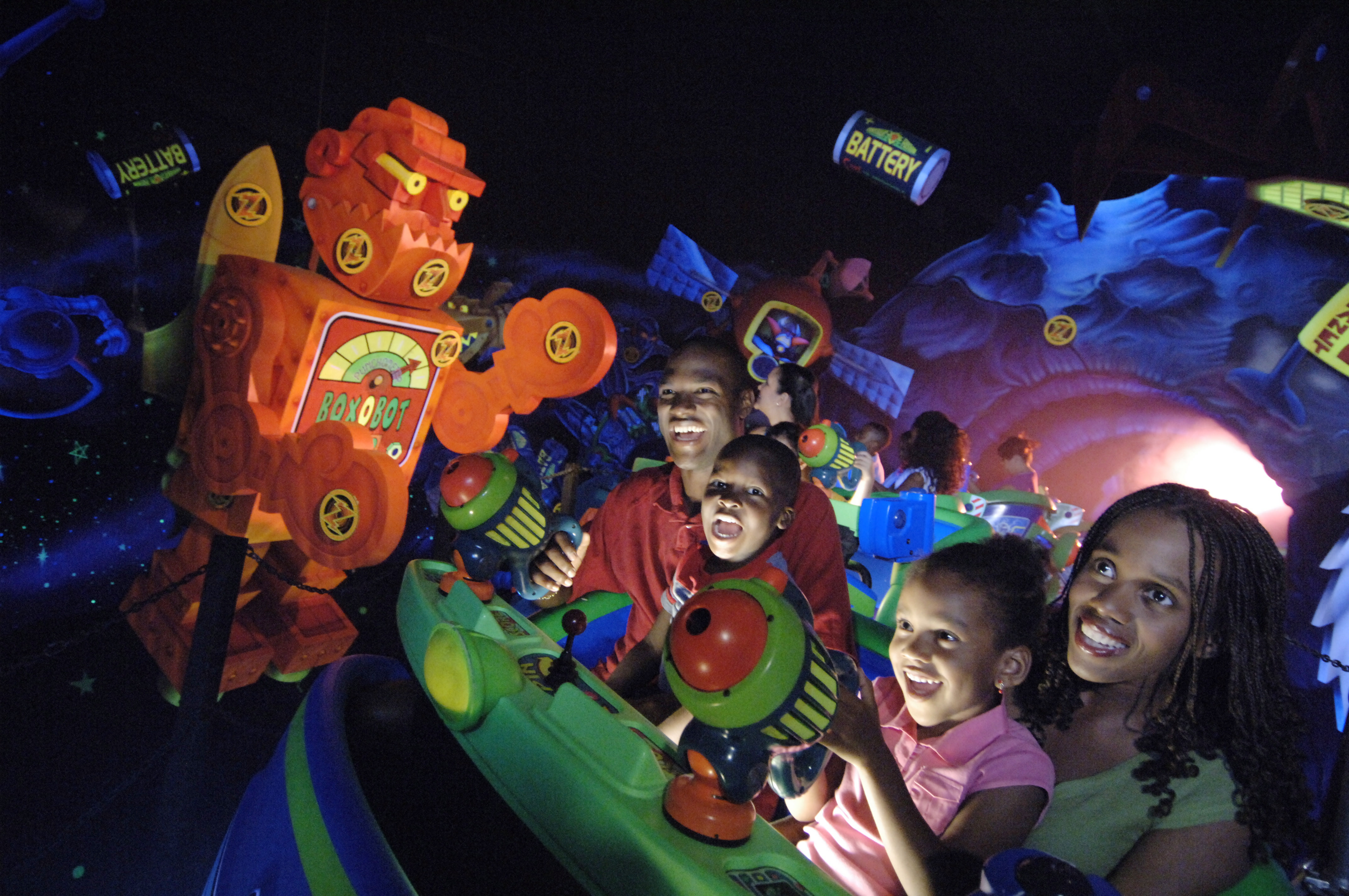 If you’re looking for entertainment, you’re in the right place. Throughout the day, there are several shows to enjoy, including the Disney Festival of Fantasy Parade which features special appearances from beloved Disney characters. Make sure you arrive early to get the perfect viewing spot along Main Street, U.S.A. There’s only one way to end the day at Magic Kingdom Park, and that’s with a viewing of the spectacular Happily Ever After firework display. Watch in awe as the Cinderella Castle comes to life with scenes from classic Disney movies and the night sky is illuminated with dazzling bursts of colour.

Meet and greets- Top of the list has to be the one that started it all- Mickey Mouse! You can also meet Tinker Bell, Peter Pan, Merida, Rapunzel, and Tiana to name a few.

Unmissable Shows- Disney Festival of Fantasy Parade and Happily Ever After. Disney’s Animal Kingdom Theme Park recently unveiled a brand new 12-acre land inspired by the popular movie Avatar. The incredible expansion features one of Disney’s most cutting-edge rides to date- Avatar Flight of Passage. The fantastic ride makes you feel like you’re soaring above Pandora, with amazing sights, sounds and smells all around you. You can also glide along a sacred river surrounded by bioluminescent plants in Na’vi River Journey and get up close to the famous floating mountains. Of course, that’s not all! Disney’s Animal Kingdom is known for being home to more than 1,700 beautiful animals. Kilimanjaro Safaris is a must-do attraction, as it gives you the chance to get a close-up look at the animals roaming the 110-acre Harambe Wildlife Reserve. You can expect to see giraffes, elephant, gazelles, lions, rhinos and much more. The park also has lots of fantastic shows running throughout the day. Not only are these great fun, but also a great place to escape from the Floridian sunshine for a while. The Festival of the Lion King is a must-see, packed with plenty of classic Disney hits, impressive trapeze acts and familiar faces. End your evening watching colourful floats glide along the Discovery River, in the stunning Rivers of Light show.

Meet and greets- Meet Rafiki from The Lion King, Pocahontas and Russell from UP.

Unmissable Shows- Festival of the Lion King, Rivers of Light, Finding Nemo- The Musical (this is the first time Disney has ever taken a non-musical animated feature and transformed it into a musical production and is well worth seeing). 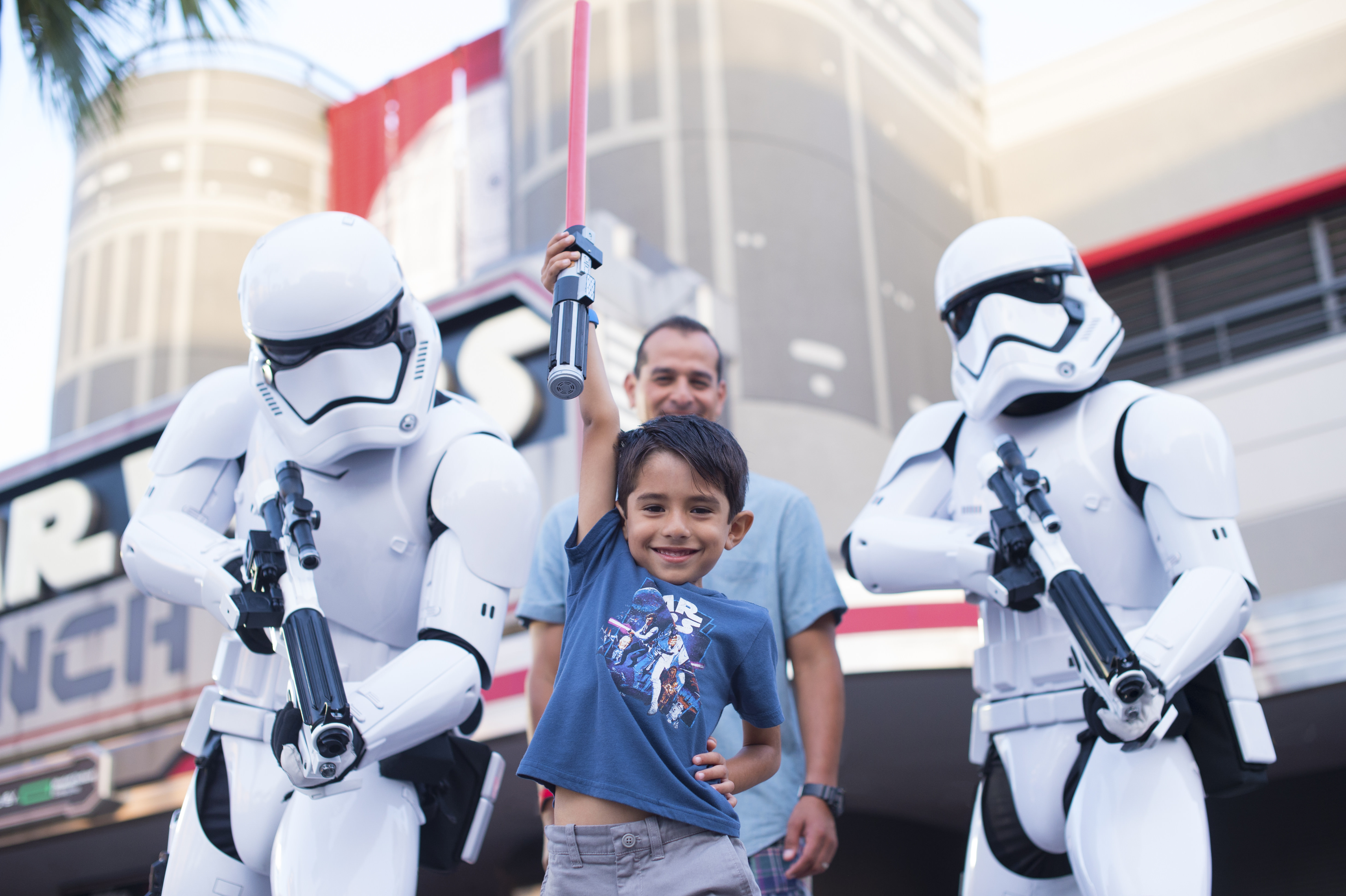 Calling all Star Wars fans! If you want to meet your Star Wars heroes (and villains!) this is the place for you. Immerse yourself in the Star Wars galaxy as you experience action-packed rides like Star Tours- The Adventures Continue, and find yourself in the middle of an army of patrolling Stormtroopers. Disney’s Hollywood Studios Park is also home to some of the most iconic Disney rides of all time. A visit wouldn’t be complete until you’ve braved the Twilight Zone Tower of Terror and Rock ‘n’ Roller Coaster Starring Aerosmith. These are the kind of attractions you’ll want to ride over and over again!

This is also the place where you’ll see some of your favourite movies come to life before your eyes, including the magic of Toy Story in the newly-opened Toy Story Land. Slinky Dog Dash is a must-do for all the family's thrill seekers while Alien Swirling Saucers is perfect for little ones and big kids alike! 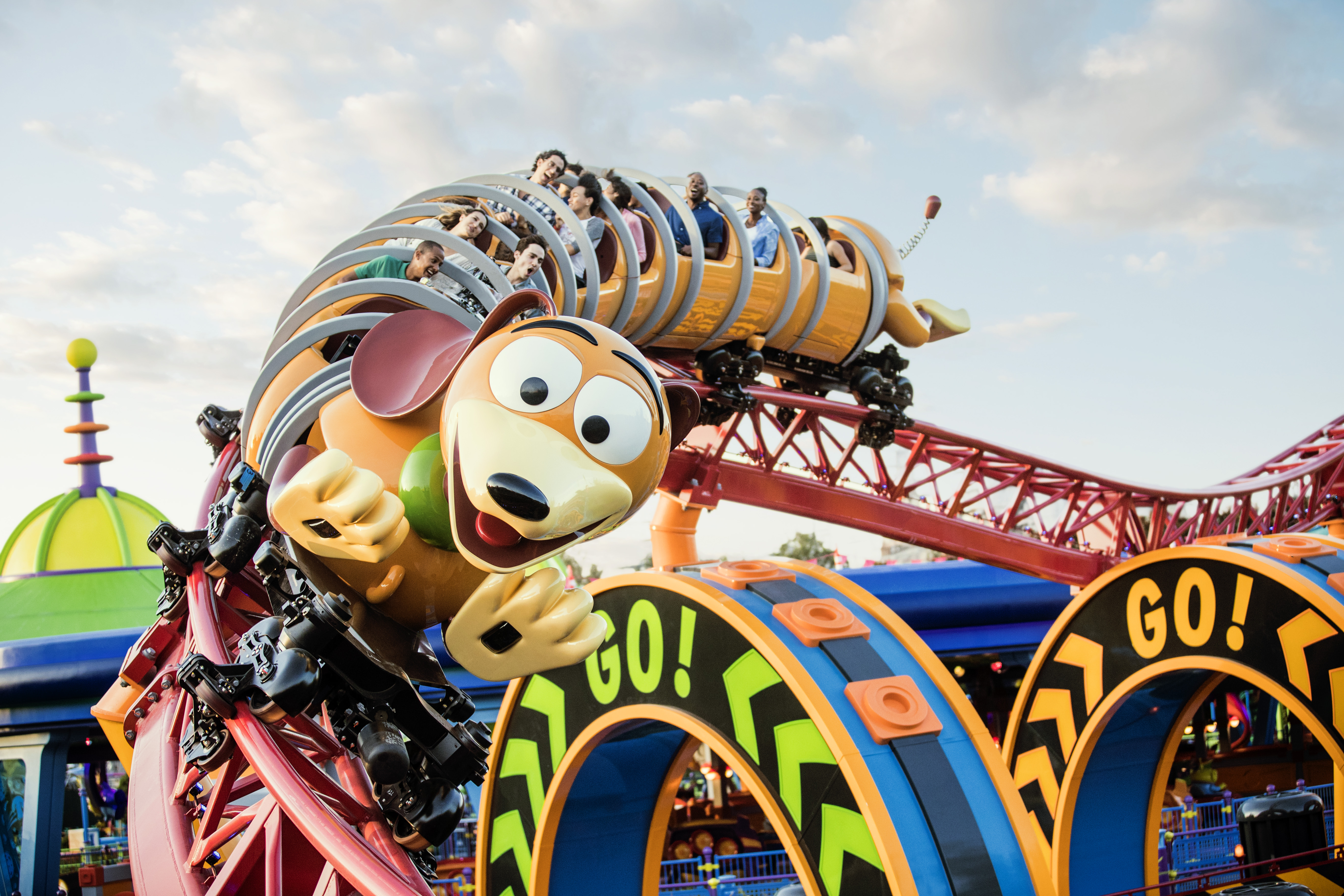 Unmissable Shows- One of our favourite shows has to be Fantasmic! You’ll be immersed into one of Mickey’s incredible dreams where an epic battle between good and evil breaks out. There’s music, lasers, fireworks, one-million gallons of dancing water and a 40-foot dragon! Epcot is a totally unique park, with incredible attractions, mouth-watering cuisine and 11 different countries to explore! While Epcot definitely has lots that will keep the little ones entertained (like Frozen Ever After!) this is also a particularly great park for adults, who can appreciate the wonders of the World Showcase.

As you walk around the park, you’ll actually feel as though you’re visiting the different countries. One of the things we love to do most is spend some time exploring each country one by one, discovering the unique traditions, admiring the iconic landmarks and sampling the amazing food. There’s nothing quite like walking past the Eiffel Tower one second and finding yourself in a traditional British pub the next! Epcot is also famous for its festivals. Throughout the year, the park hosts a series of special events, including the International Festival of the Arts, International Flower and Garden Festival and the International Food and Wine Festival. If you’re visiting during one of these occasions, make sure you pay a visit, as they’re all great fun and completely FREE with your theme park tickets. Don’t forget about the rides! Children will want to head straight to rides like Frozen Ever After and Turtle Talk with Crush, while thrill seekers will be in search of the fastest ride at Walt Disney World Resort- Test Track. Soarin’ Around the World is a ride that everyone can enjoy, and one that should be top of your list. Don’t leave without trying it! 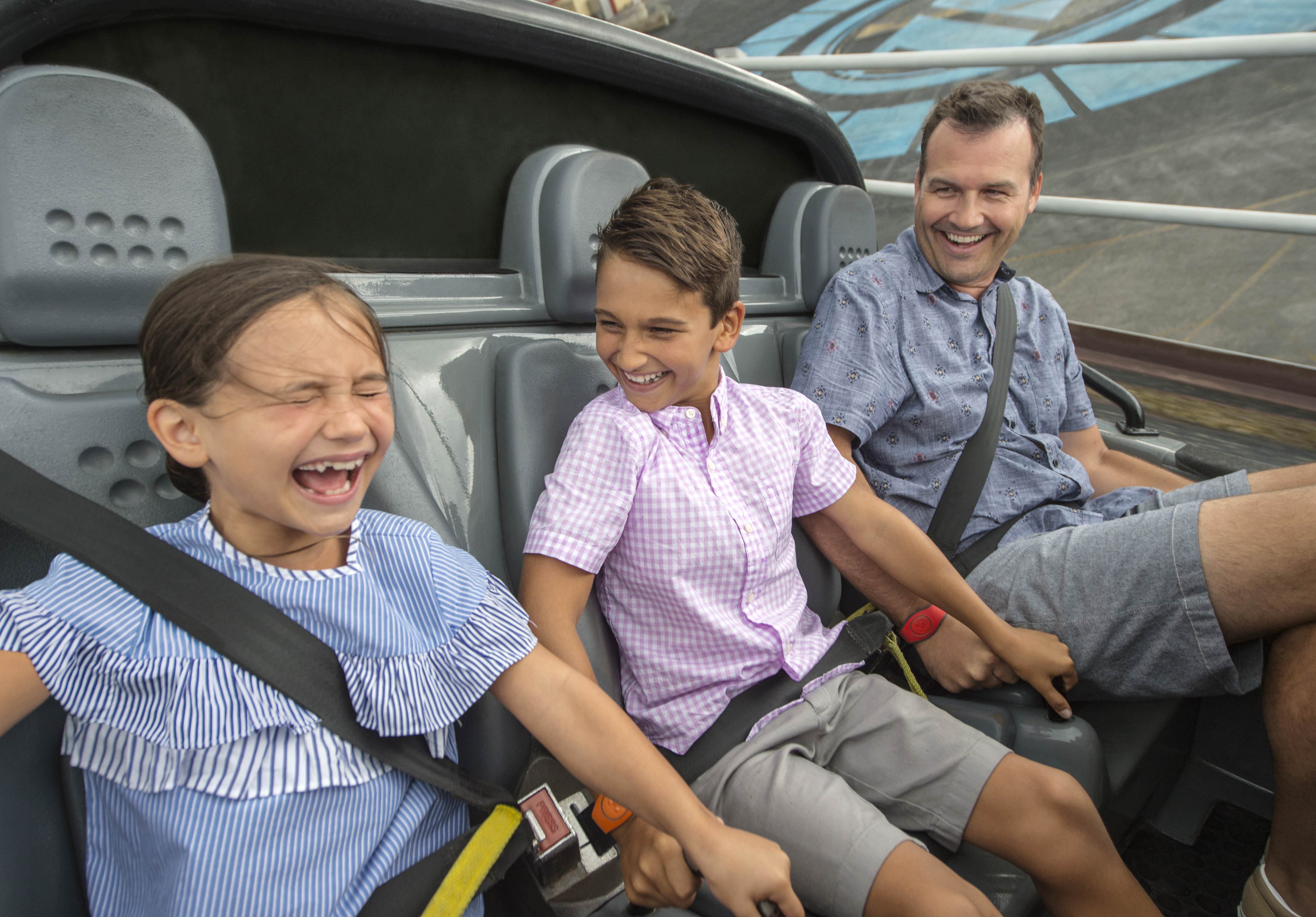 Meet and greets - This is a great park for meeting Disney princesses like Anna and Elsa, Belle, Mulan, Princess Jasmine and Snow White. You can also meet Donald Duck, Goofy, Baymax and Joy & Sadness from Inside Out.

Top rides- Soarin’ Around the World, Test Track, Frozen Ever After

Unmissable Shows- IllumiNations: Reflections of Earth is a must-see! This amazing firework show is all about celebrating the spirit of humanity. Make sure you see it before you go. What’s the best way to cool down from the Floridian sunshine? At a water park of course! Designed to look like an old ski resort, that has melted into a watery wonderland, Disney’s Blizzard Beach Water Park is a great choice for those wanting to give their feet a bit of a break but don’t want to miss out on the theme park-worthy thrills. We’d recommend scheduling in a day at one of Disney’s water parks during the middle of your holiday, when you might be ready for a more relaxing day in between exploring the theme parks. Thrill seekers will want to head straight to the park’s most terrifying attraction- Summit Plummet. The near-vertical 120-foot drop slide is one of the tallest, freefall body slides in the world! If you’re up for a challenge, make sure this is at the top of your list. For those who’d prefer something a bit more relaxing, float along the Cross Country Creek lazy river, or spend a perfect day on the white sandy beach. Kids will be kept entertained for hours at the Ski Patrol Training Camp, where they can enjoy a whole host of exciting water activities. Disney’s Typhoon Lagoon Water Park is great fun for the whole family, with a mix of big thrills, kid-friendly attractions and a sandy beach -perfect for lazing the day away! The Water Park has a tropical theme, but as you explore, you’ll notice signs of destruction. As the legend goes, many years ago, a typhoon wreaked havoc on the formerly pristine paradise. As you explore, you’ll notice surfboards, fishing gear and other mysterious objects that the storm left behind. 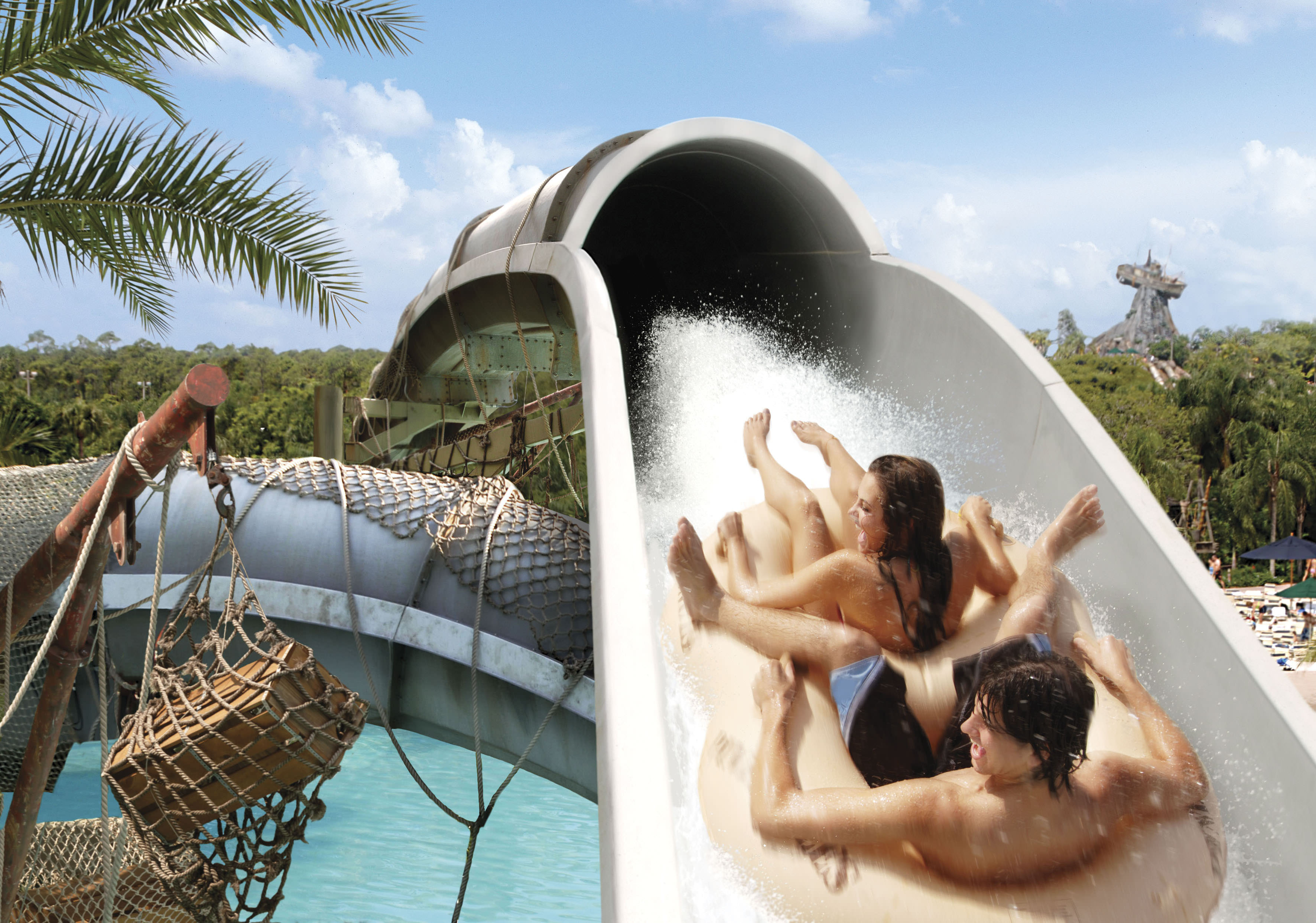 If you’re looking for adventure, take the plunge on some of the park’s biggest water slides. Humunga Kowabunga is not for the faint-hearted with its 214-foot drop at a 60-degree angle! Crush ‘n’ Gusher is another must try attraction, and with different chutes to choose from, you can decide how daring you want to be.

Castaway Creek provides an idyllic break from the action, and lets you float along a 2,000-foot long river that spans around the entire park. The little ones will love Ketchakiddee Creek, where they can splash around in the water playground all day long. Disney’s Typhoon Lagoon Water Park welcomed a brand new ride last year called Miss Adventure Falls, and a visit to the park wouldn’t be complete until you’ve tried it. Set sail on an exciting adventure and look out for hidden treasures along the way.