A Behind-The-Curtain Peek At ICE!

Orlando , Seasonal Events
By ATD’s Florida Experts, Susan and Simon Veness
If you’ve ever visited Orlando in November or December you have probably heard about—if not visited—one of the area’s most anticipated annual events: ICE! at the Gaylord Palms Resort. But how do all those incredible hand-carved sculptures come together? Join us for a sneak-peek at the making of ICE!

In past years, themes such as A Charlie Brown Christmas, ʼTwas the Night Before Christmas, Frosty the Snowman, The Nutcracker, and Dreamworks’ Shrek the Halls and Merry Madagascar delighted guests with their whimsical stories carved in ice. This year’s theme is the non-proprietary Christmas Around The World, which means Gaylord Palms could offer a behind-the-scenes preview event. And you know we wouldn’t pass that up, nor would we pass up the chance to bring you along with us.

Our preview started in the resort lobby, where the Chinese artisans made their grand entry, waving and high-fiving like the rock stars they are. As soon as media had taken their photos, they took photos of each other, proving the event isn’t just special for us, it’s special for them, too. 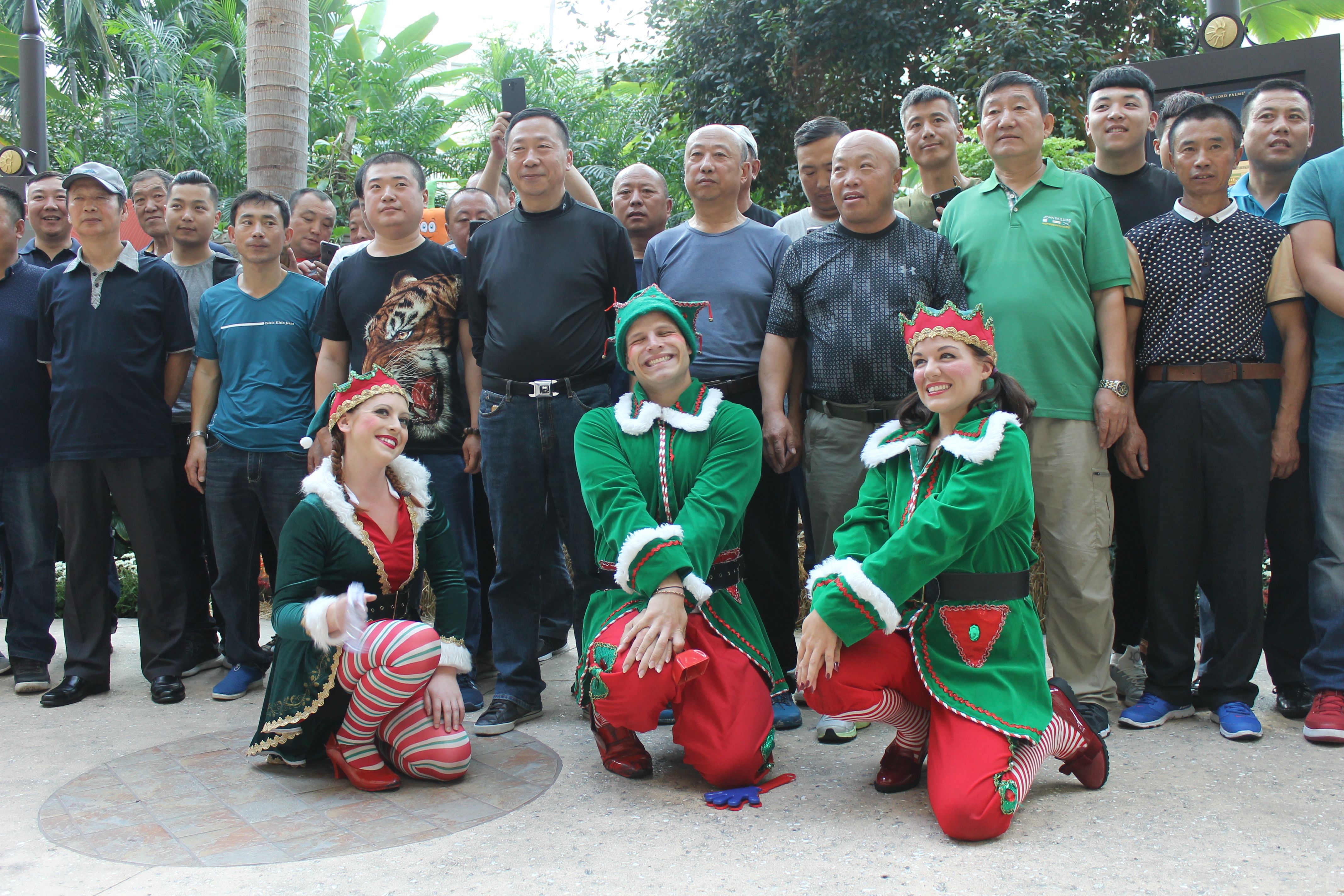 While the artists geared up and began their work, we headed to the cloak room, where we were fitted (and we use that term loosely!) with heavy parkas provided for all ICE! visitors by Gaylord Palms (Hint: don’t wear your shorts and flip-flops to this one. Remember, it’s -12C in there!). 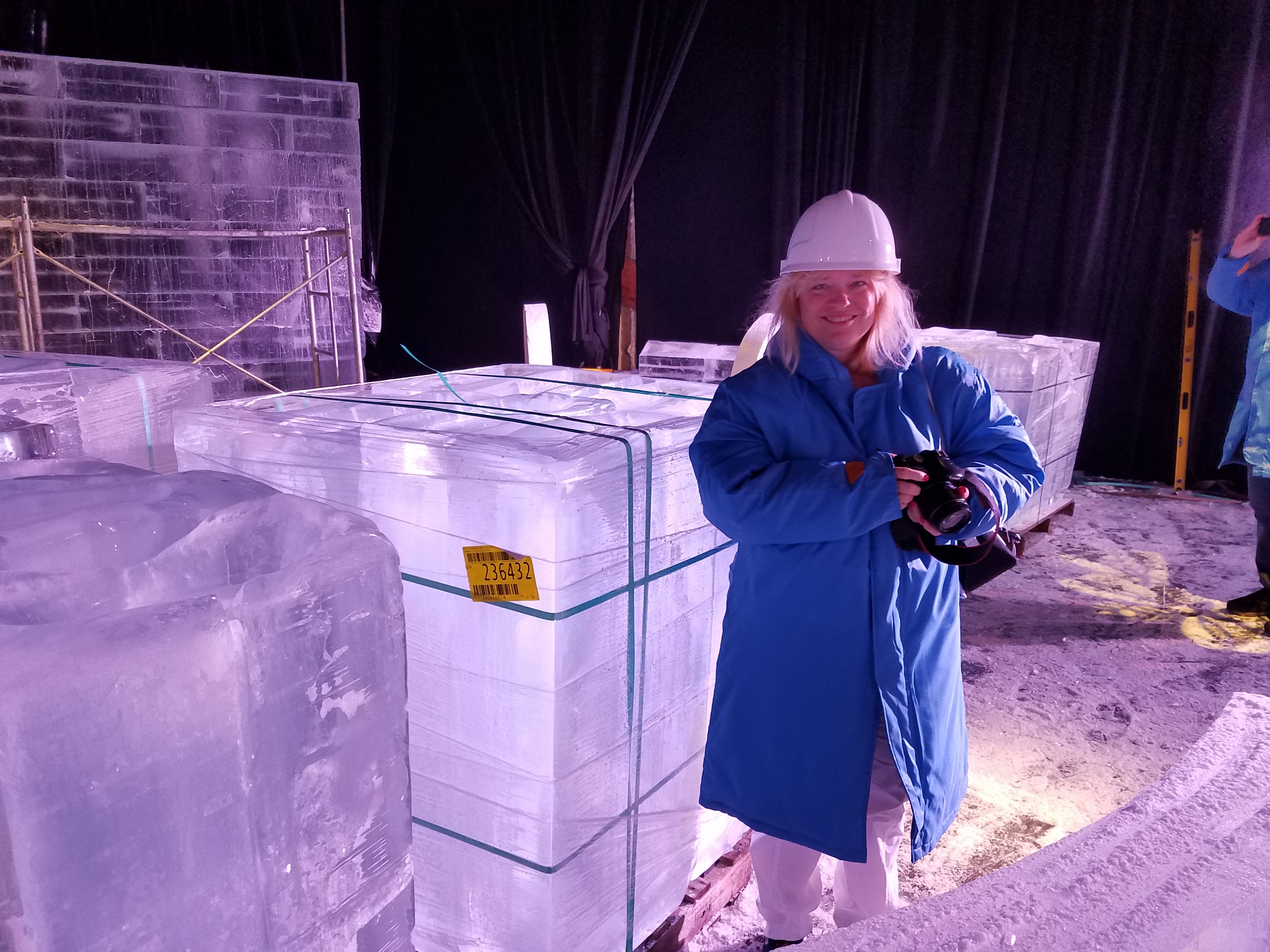 Then we entered the ‘Florida freezer’ tent, where the floor was covered in ice chips and tiny snow-drifts. Gargantuan blocks of ice were stacked around the room or being moved by forklifts, and the sound of chainsaws and the sight of ice-dust glittering in the air immediately set the stage for something special. 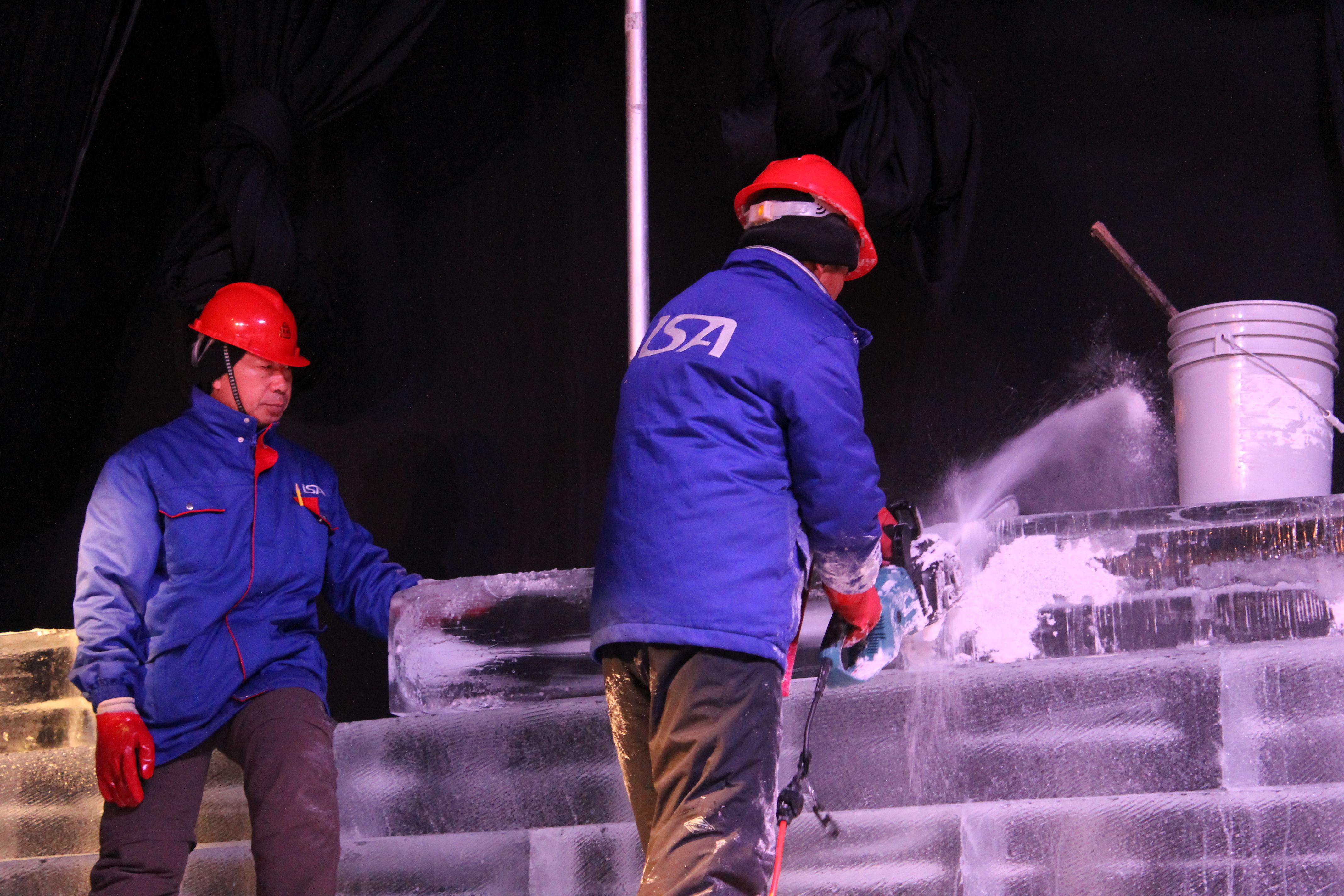 Artists were selecting enormous blocks of ice, carving them to the right size, fitting them just-so, then pouring hot water into the seam to seal it tight. Every ice wall you’ll see in the display, every large-scale sculpture, and the magnificent Nativity scene that makes up the finale each year, has gone through this meticulous process. 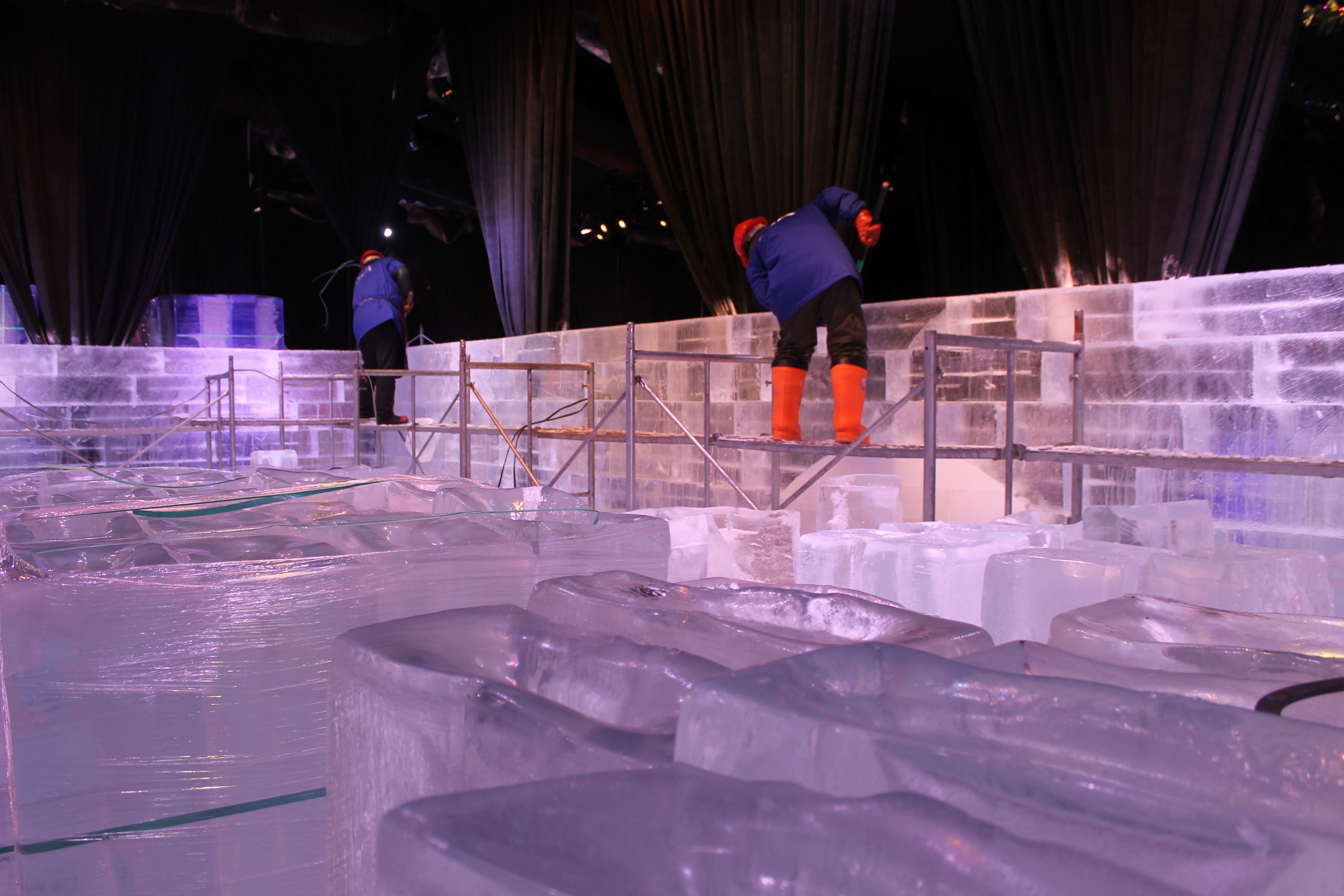 We watched artists as they carved coloured ice into characters from around the world, following detailed plans as they worked. 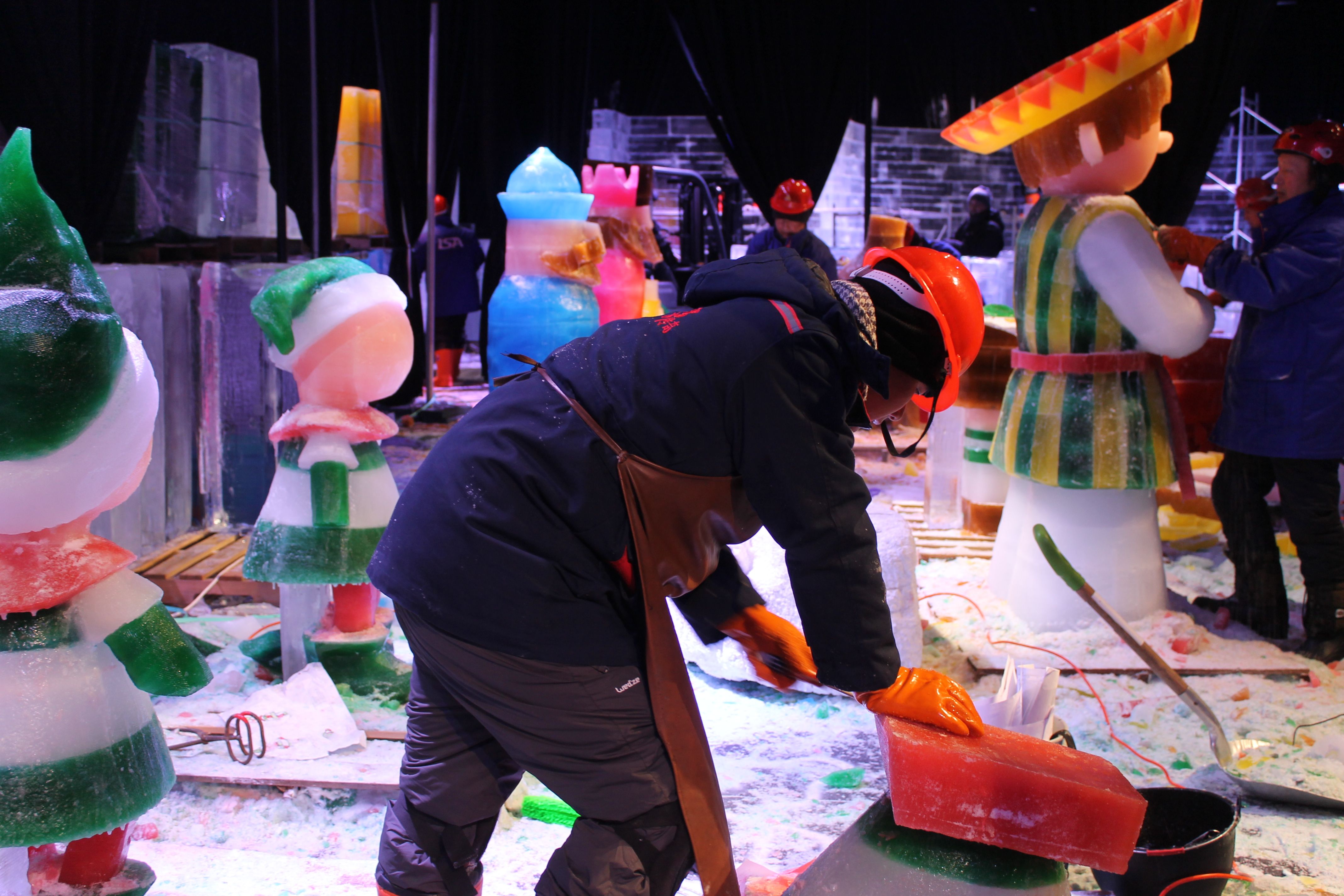 But the final touches were down to each expert carver’s own technique, transforming static blueprints into charming figures. 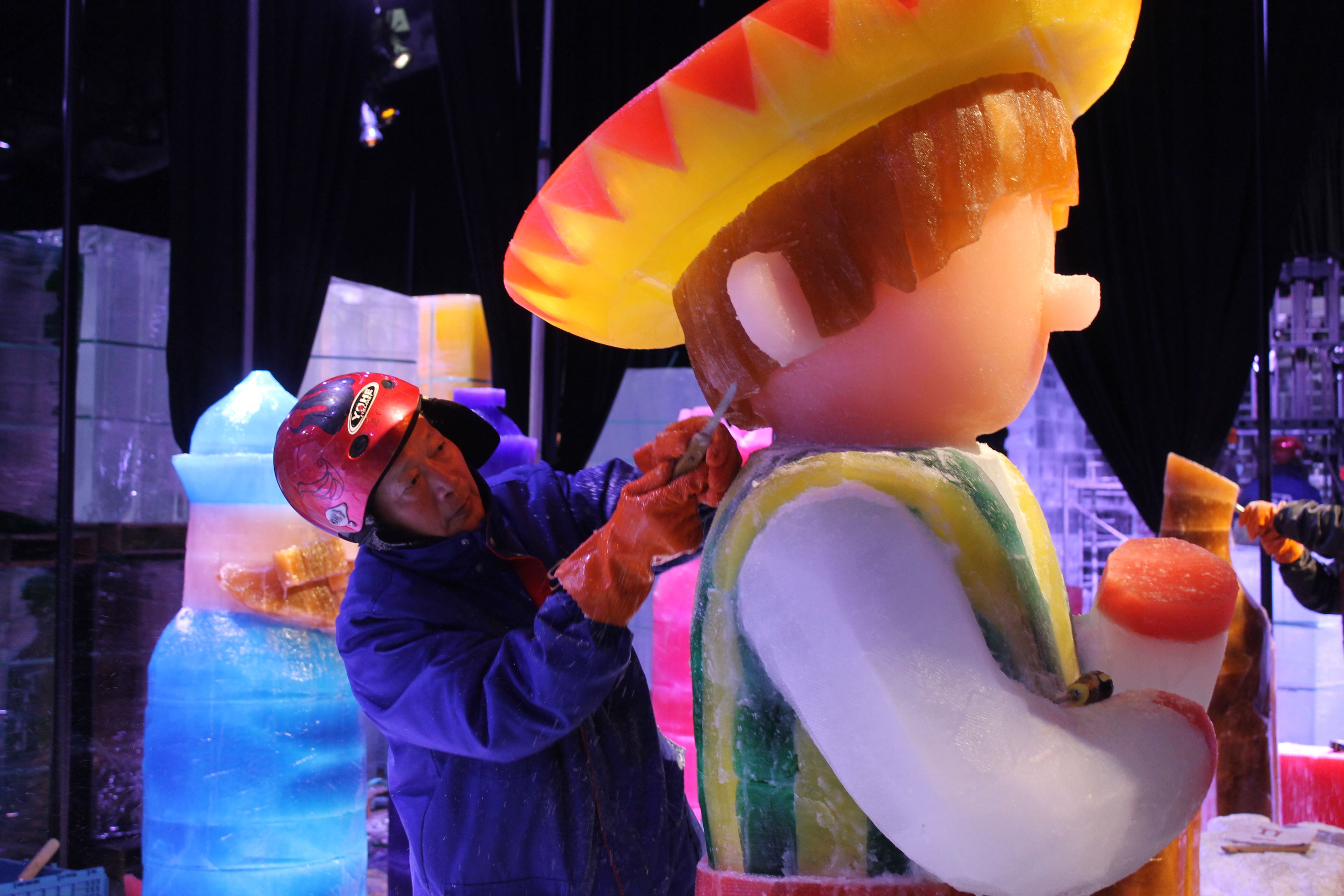 It was fascinating to see things like Santa’s trousers and a giant wooden shoe, completely out of context. Having a behind-the-curtain look at the making of ICE! only added to the magic, and we can’t wait to see the finished product. 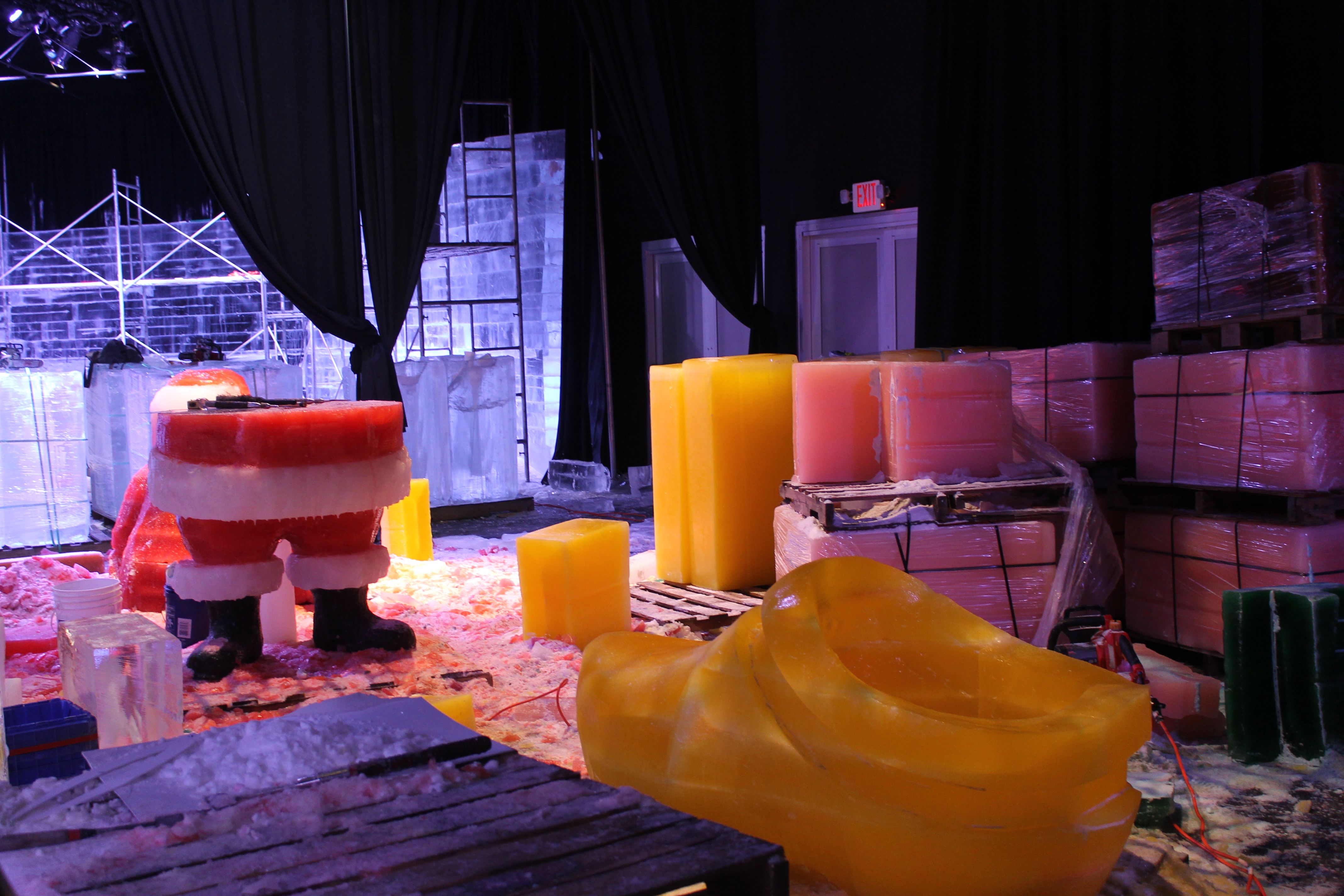 It’s a ‘given’ that the “Florida freezer”, with its captivating sculpture vignettes, two-story ice slides, and incredible Frostbite Factory with live ice carving demonstrations, will be a highlight of any November or December visit to Orlando. 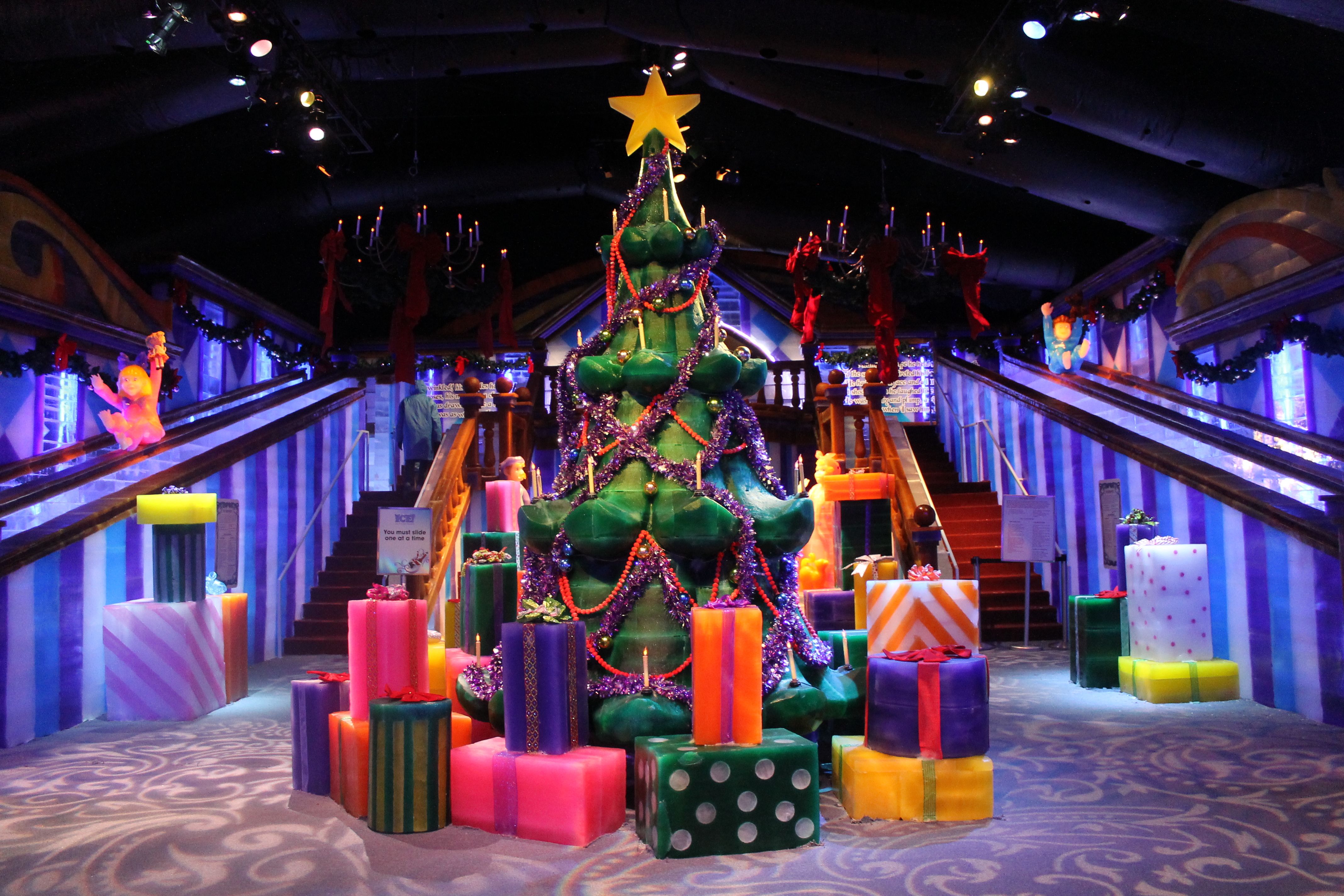 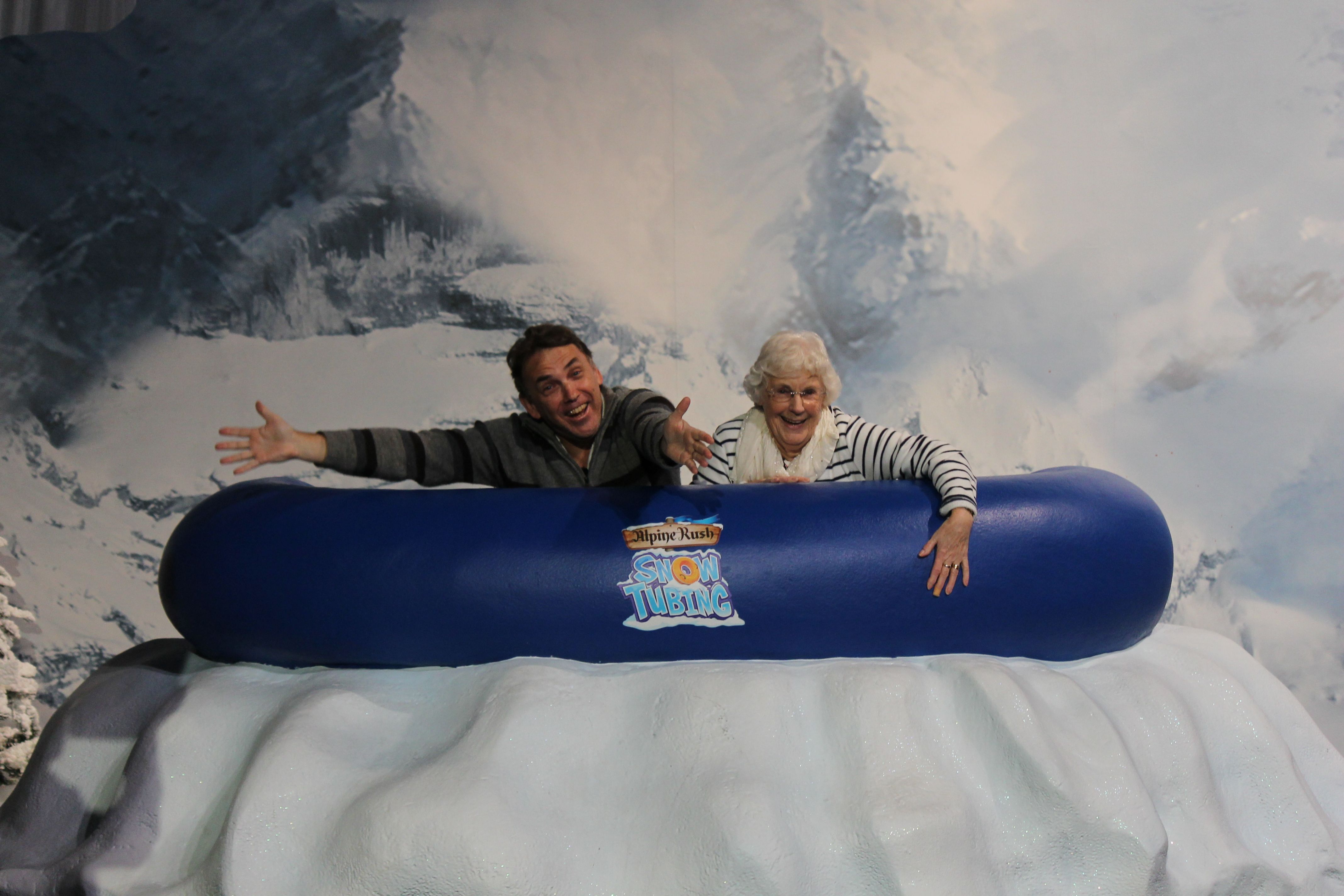 Along with the established favourites, ICE! has a few new elements for 2018, including the Christmas Tree Trail in the Everglades section of the atrium, with nine trees depicting holiday traditions from around the world; Jack and Jackie Frost, who step in for Santa and Mrs Claus, entertaining guests after 24 December; Painting with a Twist, where guests can purchase a canvas and make a painting worthy of gift-giving; and the new Reindeer Express Post Office, where children can fill in a postcard with their Christmas wishes and send it off to the North Pole. And, since we’re living in the digital age, postcards are stamped and scanned, and are then returned to the children as keepsakes.

Make no mistake, ICE! isn’t the only thing Christmassy going on at Gaylord Palms. The resort’s massive atrium plays host to JOYFUL! a free “multisensory experience” of holiday music and a choreographed light show, with a gigantic, six-storey tall Christmas tree as the focal point. Also free is the spectacular 25-minute Cirque Dreams Unwrapped by Cirque Productions, featuring a dynamic Christmas-themed “dream” presented as only these imaginative folks can do. 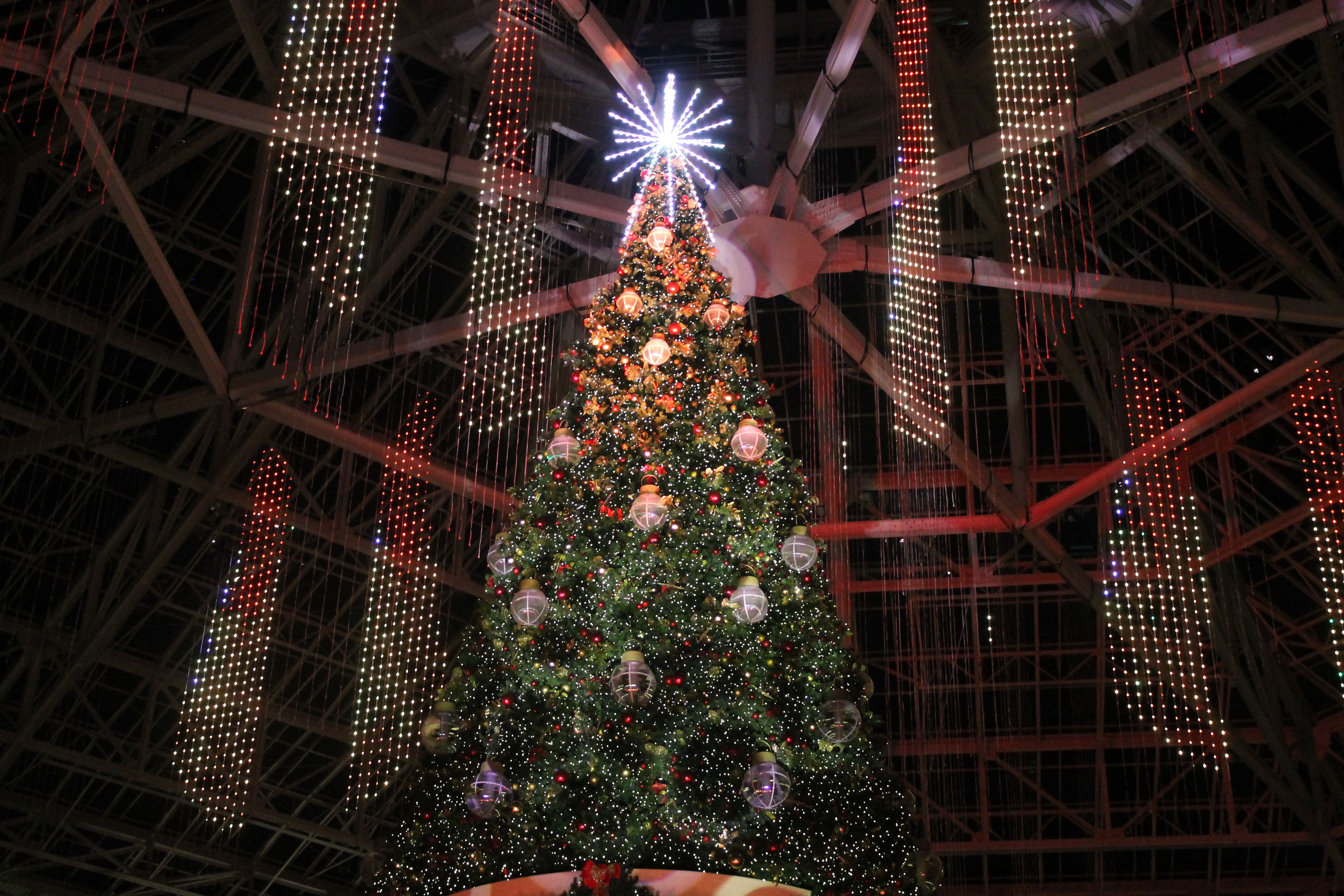 Add-ons include Mrs. Claus’ Christmas Traditions, with readings of classic holiday stories and a Christmas carol sing-along, plus fresh-baked cookies and cold milk; Breakfast with Charlie Brown & Friends, which now includes the beloved character, Linus; the Build-A-Bear Workshop Scavenger Hunt, where participants search for bears relaxing in semi-hidden locations, having used up all their energy decorating the resort for the holidays; the Sounds of the Season Concert Series, featuring concerts by local performers Voctave, the Orlando Gay Chorus, Gaylord Palms STARS, and a special performance by Opera Orlando, Orlando Philharmonic, and the Orlando Ballet; the popular (and self-explanatory) Gingerbread Decorating Corner; and, of course, the chance to have a Photo with Santa Claus, and tell him what’s on your Christmas wish list. 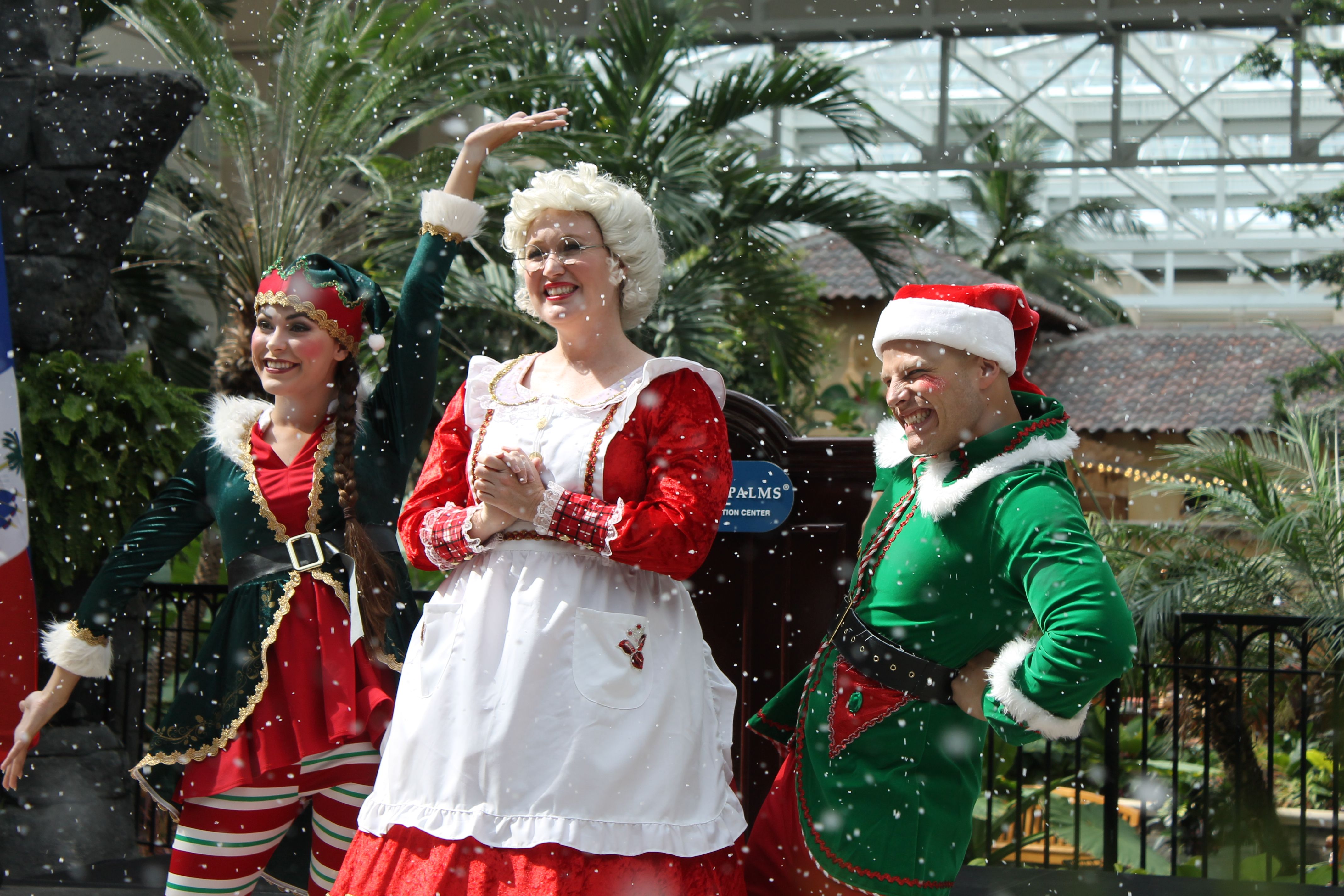 Make a day of it, as we do, and if you’re looking for a special Christmas brunch or dinner on December 25, let the resort’s Villa de Flora or Old Hickory Steakhouse do the cooking.