Jaleo Brings A Taste Of Spain To Disney Springs

By ATD’s Florida Experts, Susan and Simon Veness
Some of the best days are days spent sharing a meal with family and friends, and Disney Springs’ newest restaurant, Jaleo, takes that concept to heart. From tapas and paella to cheeses and Sangria, this ‘taste of Spain’ is more than just food, it’s a shared sense of community.

Disney Springs is now a Mecca of celebrity chefs, and latest of these to bring their culinary art to Disney Springs is award-winning Chef José Andrés. At his new location in Walt Disney World, he brings the traditional Spanish flavours of his childhood to the table, adding a contemporary flair to dishes inspired by those made by his mother and grandmother.

Jaleo gained popularity through its previous four locations (Washington D.C.; Bethesda, Maryland; Las Vegas, Nevada; and Arlington, Virginia), and with a ready audience eager to experience each culinary delight that makes its way to Disney Springs, this brand new Orlando location is sure to be a winner as well.

Disney is all about story, and even the two-story building, designed by renowned Spanish designer Juli  Capella, plays a role. The shape of the building took its inspiration from the humble artichoke, in honour of Chef Andrés’ homeland, and by opening the indoors up to the outdoors, the way an artichoke’s petals open to reveal the goodness inside, the ambiance is one of relaxed comfort, as if you’re dining al fresco. The open-concept kitchen adds to the feeling that this is a shared experience; a gathering of friends, if you will.

Much of the food is designed with sharing in mind, too. Tapas (“small plates”) are Chef Andrés’ signature items, and, because variety is the spice of life, it’s the sort of dining we prefer, for the chance to sample several things without feeling overly stuffed.

Gambas a la Zahara (head-on shrimp with garlic and olive oil) and Croquetas de Pollo (chicken fritters) are the specialities of the house, and each pairs nicely with Acitunas modernas y clásicas (‘Ferran Adriá’ liquid olives and gordal olives stuffed with piquilla pepper and anchovy) and Dátiles con tacino ‘como hace todo el mundo’ (fried dates wrapped in bacon). The names are a bit of a mouthful, but the taste is divine! 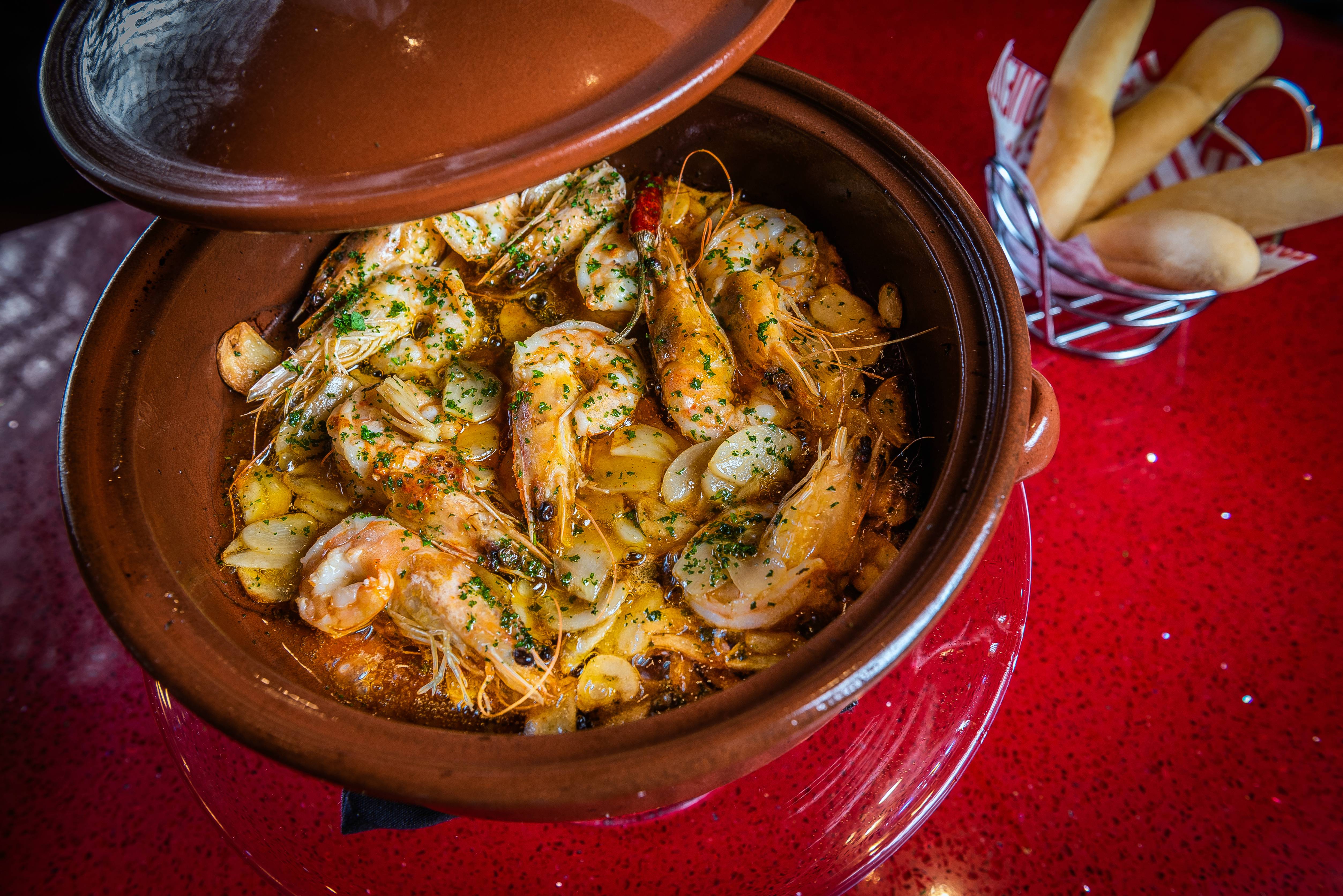 Paella is a dish that practically begs you to share with friends and family. Slow-cooked over a wood fire, Jaleo’s version adds that extra ‘something special,’ and the menu features 5 different paellas (two meat, two seafood and one vegetable), with two selections available each night.

If just one person in your group wants to try it, they can order by the plate. Have eight or more in your group and want the authentic paella experience? Order by the pan and make it a communal meal, as it is meant to be. Obviously, you’ll also order Sangria with that. 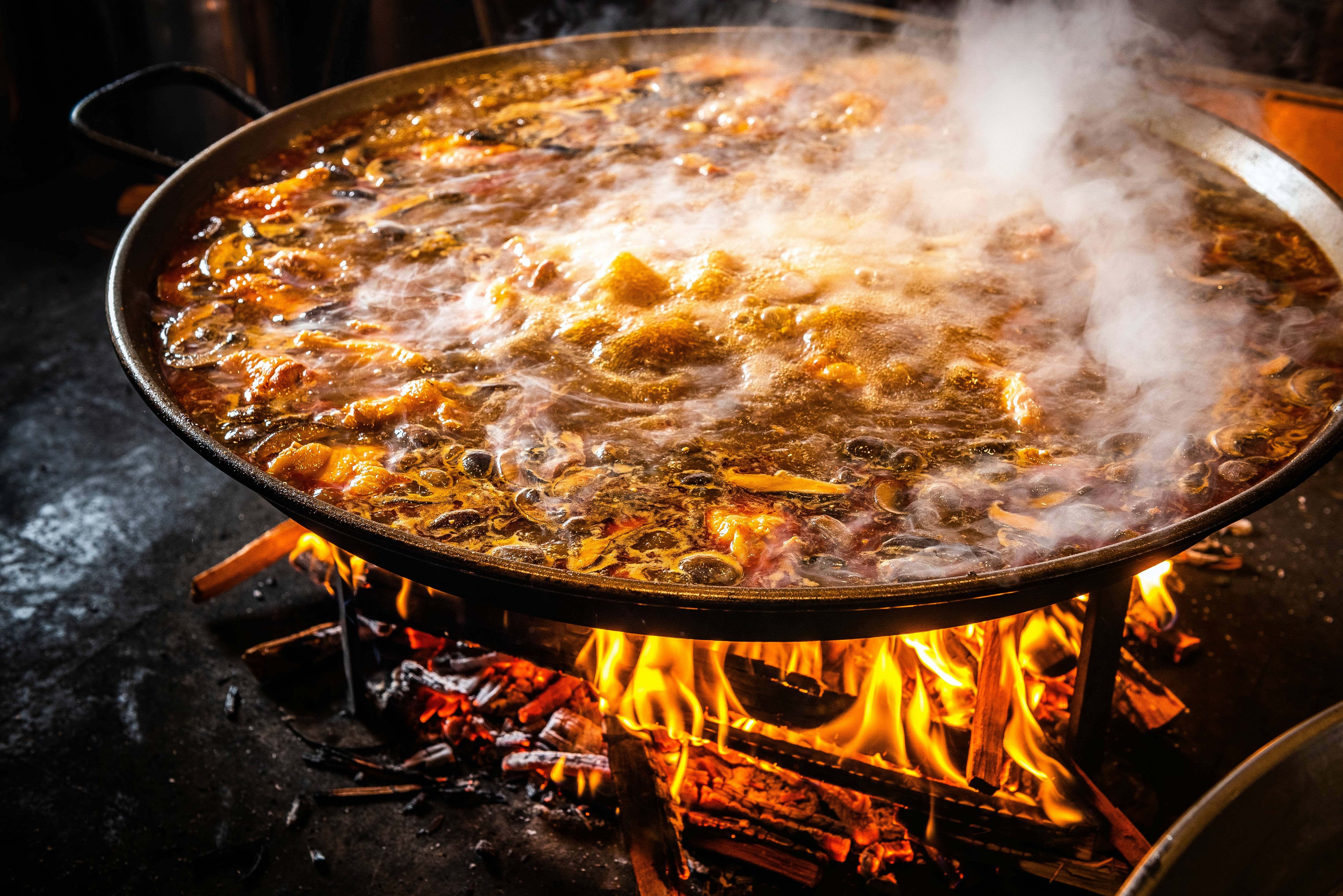 But which Sangria? Because at Jaleo, there are three varieties. Sangria Roja is the version you’re probably thinking of when you hear the word Sangria. Sangria de lujo cava (roughly translated as “luxury sangria from the wine cellar”) is the sparkling version, and Sangria de lujo tinto is the splash-out version, prepared tableside with the addition of spiced wine, gin, brandy and citrus.

Want to try the most authentically Spanish dishes? Order the hand-carved Jamón Ibérico de Bellota cortado a mano (cured ham, carved tableside) or the Salchichón Ibérico pork sausage. The Jamon (ham, from free-range, acorn-fed iberico pigs) has a mildly salty bite, but not overly so, and it’s melt-in-the-mouth tender, while the Salchichón is a heartier dish, also from free-range, acorn fed pigs.

You will, of course, choose custardy Flan as your dessert, and allow the smooth, creamy texture of this most Spanish of finales to complete your culinary cultural journey. Its full title is Flan al estilo tradicional de mamá Marisa con espuma de crema catalana, which translates to “Flan in the traditional style of mama Marisa, with Catalan cream foam.” In other words, “Flan like grandma used to make,” because this is literally made using Chef Andrés’ grandmother’s recipe.

Adventurous? Go for the Pulpo a la Gallega (tender boiled octopus with peewee potatoes) or the Conejo en Salmorejo con puré de albericoque (hearty marinated rabbit confit with apricot purée). Not even a tiny bit adventurous but you’re there because everyone else wanted to try it? Chuleton  buey a la parilla sounds scary, but it’s a comfortably familiar prime Angus certified beef ribeye steak. Ibérico de bellota mini hamburguesa is exactly what it sounds like: a scrummy mini hamburger with bacon.

An adorable Kids Menu (printed on Jaleo’s iconic Flamenco-style paper fan) features dishes from the main menu, but if you have a youngster in your group who is a timid eater, remind them Croquetas de Pollo is like a “magical” version of chicken nuggets. It’s even served on a fancy dish that we think is reminiscent of the flying carpet from the hit movie, Aladdin. 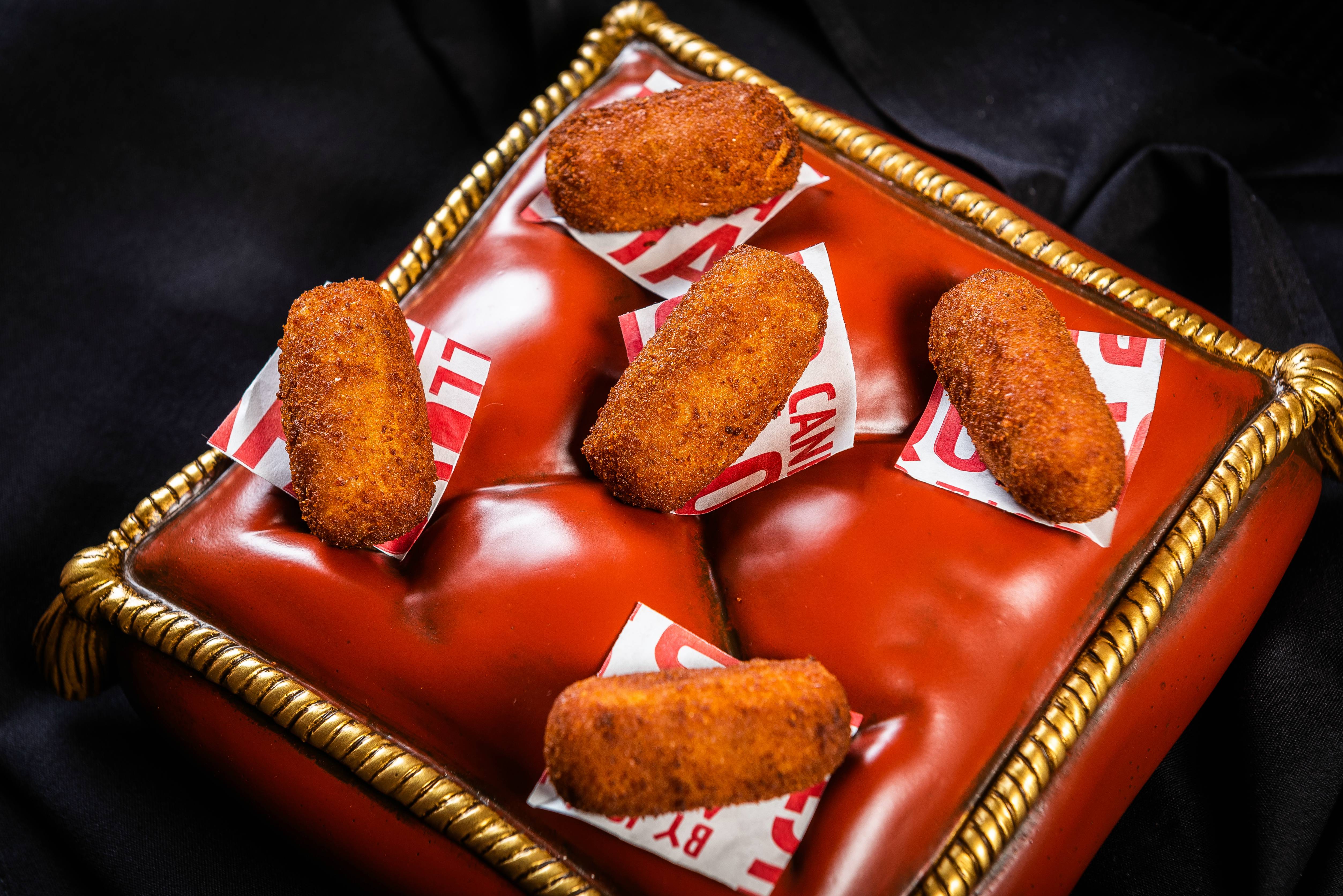 There are also 10 handcrafted speciality cocktails, four versions of the Gin & Tonic, wine, beer, and non-alcoholic beverages, including Mexican Coke and Mexican Sprite, and a gorgeous bar inside the restaurant is the ideal place for a pre-dinner drink, or for passing a pleasant hour or two on a summer evening. 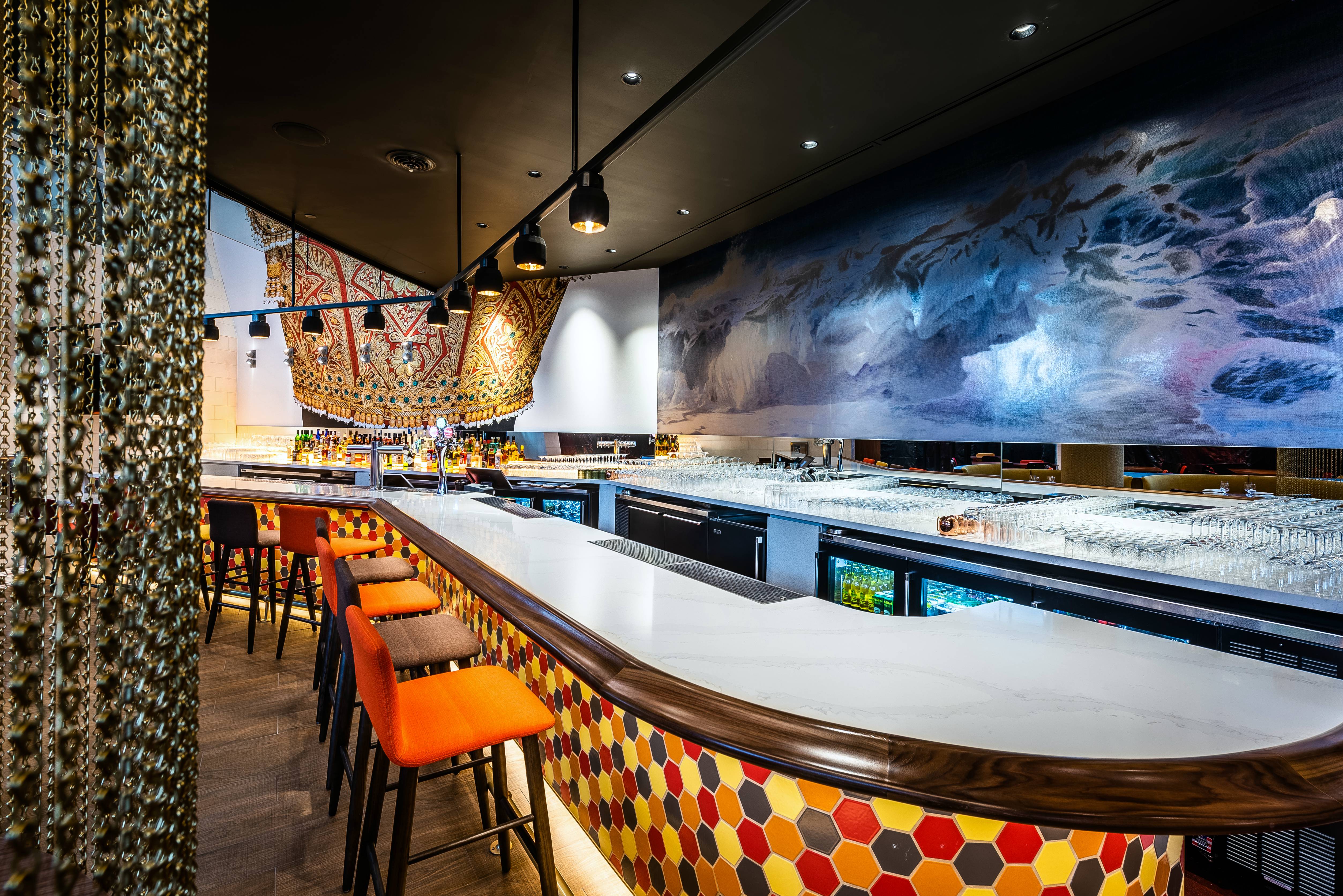 Love to people-watch? Ask for a table on the outdoor patio, with a fabulous view of Disney Springs and the pretty waters of centrepiece Lake Buena Vista. Love the food so much you want to prepare it once you return home? Chef Andrés’ Made In Spain cookbook is available in the gift shop.

Jaleo is a superb addition to Orlando’s finest collection of restaurants in one convenient location, but don’t worry if you don’t have time for a sit-down meal. You won’t have to miss out on a taste of Spain. Pepe-By José Andrés quick service counter offers a terrific selection of hot and cold Spanish sandwiches, plus salads, gazpacho, soft-serve ice cream, sorbet, beer, wine, Sangria and non-alcoholic beverages. 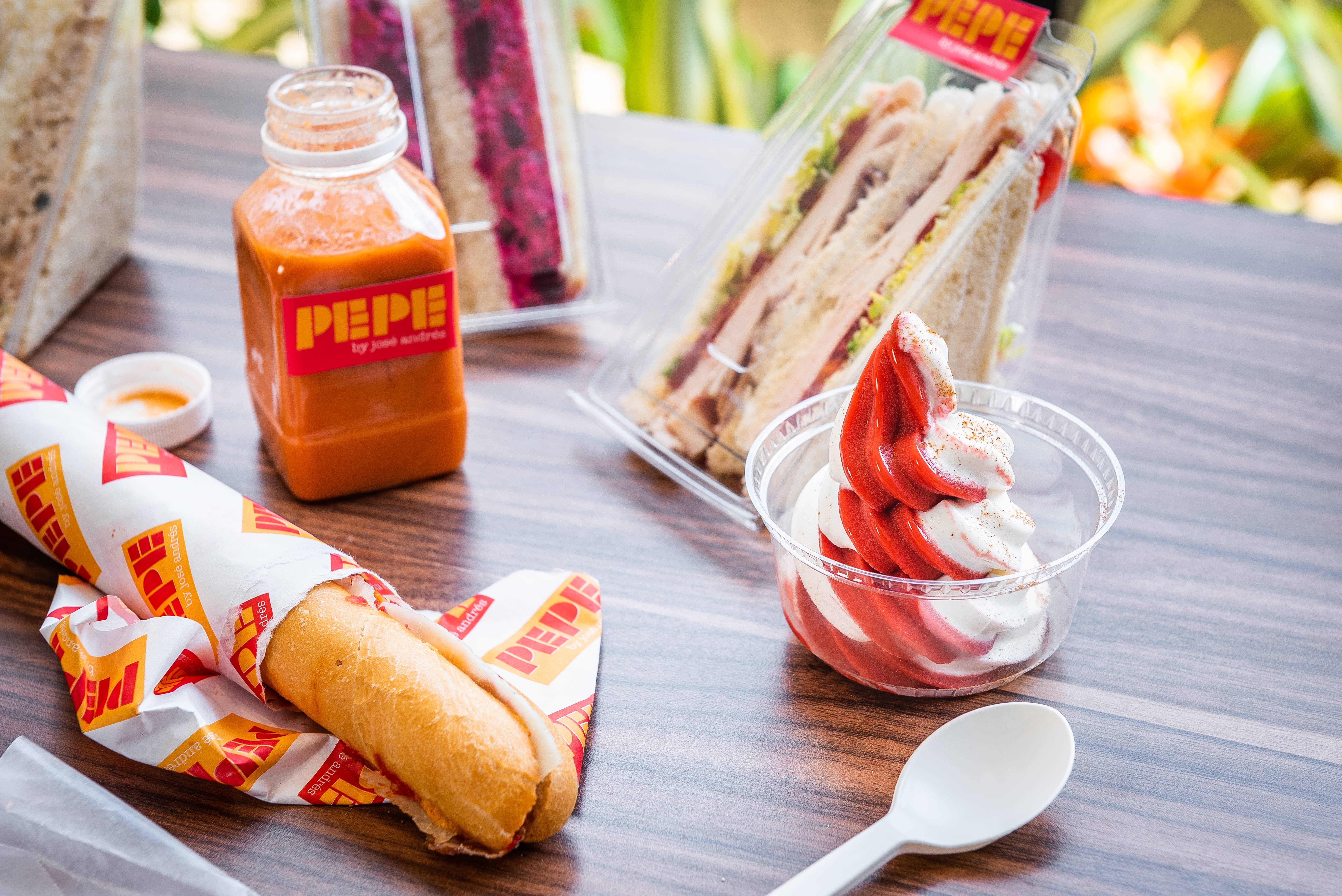 At this time, Jaleo is serving dinner from 5pm-11pm Sun-Thurs, 5pm-midnight Fri-Sat, but they plan to add lunch by the end of March, as well.

Are you as excited about this new Disney Springs restaurant as we are? Join us on Attraction Tickets Direct’s discussion forums and tell us what YOU plan to order!