A Magnificent Seven Reasons To Be Excited About Orlando In 2018

Orlando , New Attractions , Expert View Column
By ATD’s Florida experts Susan & Simon Veness
Coming to Orlando in 2018? Excited? You certainly should be! Every new year in the Theme Park Capital of the World is full of eager anticipation, but the next 12 months are positively packed with reasons to be happy about your holiday choice.

From Walt Disney World to SeaWorld, and Legoland to Universal, there are a host of new attractions on the way, and they will make Orlando’s fabulous array of theme parks even better value in the months ahead.

Here are the magnificent seven reasons you’ll want to be super-excited about heading to the Sunshine State in 2018. 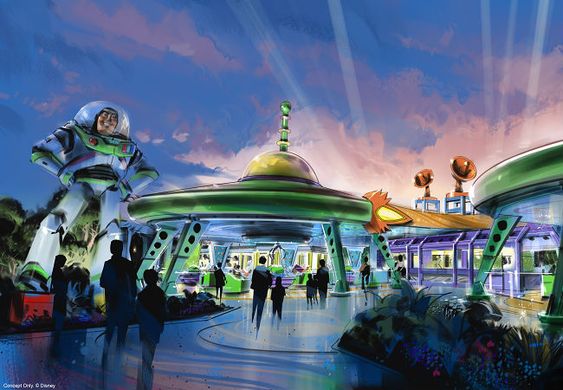 The biggest theme park development of the year will be at Disney’s Hollywood Studios, where a whole new ‘land’ will be unveiled in the summer. Based on the Toy Story films, this is currently taking shape behind the Pixar Place area of the park, and it will be an extensive proposition.

Two rides, a new gift shop and a counter-service dining option will all be part of the 12-acre Toy Story Land, and the theming will be extensive, as visitors are ‘shrunk’ to the size of a toy to fit into the land.

The undoubted highlight will be the fun roller-coaster style of Slinky Dog Dash, which should appeal to all the family, but the Alien Swirling Saucers should be equally entertaining, a spinning ride in ‘flying saucers’ with the pretend menace of ‘The Claw’ circling above. Woody’s Lunch Box, sponsored by Mini Babybel cheese, will be the main food outlet, adding to the overall theme.

Oh, and one last thing. If you’ve seen the Toy Story Playland at Disneyland Paris, this will be a completely different area in Walt Disney World, so be prepared to be surprised! 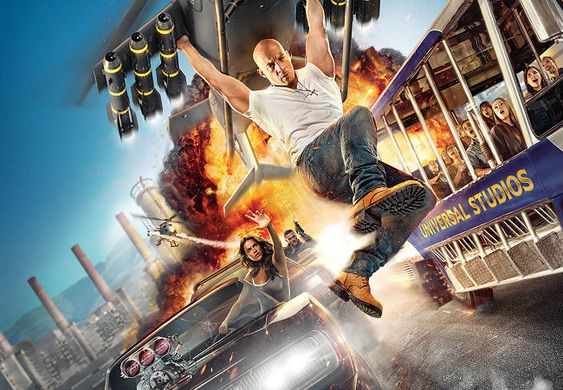 Guests at Universal Studios in 2017 will have noticed the huge building that has been constructed behind where the former Beetlejuice show theatre and the Disaster attraction used to be. And, this spring, it will open with much fanfare as the park’s latest and greatest ride.

The Fast & Furious film franchise provides the theme for an action-packed dive into the world of high-speed chases, iconic vehicles and fabulous locations. Dom, Letty, Hobbs and the rest of the F&F crew all make an appearance, and the queue area will feature no fewer than 15 authentic cars from the movies.

Even better, the attraction will feature Universal’s new Virtual Queue system, which allocates guests a time to return with only a minimal wait. You can either check in with your mobile device or visit the ride itself to get a time to return. Either way, Universal promise plenty of excitement for this Supercharged adventure.

The Studios park will also have a new night-time show for the summer, which will add even more value to this amazing film-themed universe, while Universal Orlando will also debut their glittering 16-storey Aventura Hotel in July. 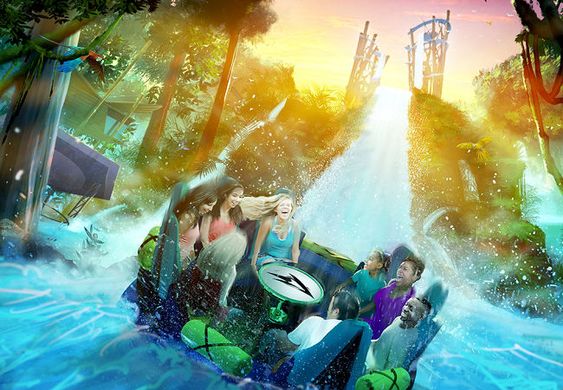 SeaWorld is another Park to offer an eye-catching new ride in summer 2018, and this will feature several first-of-its-kind elements, as well as a fun way to get wet, and a major environmental story.

The whole idea of the attraction is a lesson in conservation, with visitors going on a raft-ride journey of discovery along an uncharted jungle river that features the remains of an ancient civilisation. It starts with a unique vertical lift hill for your raft, and continues on a swirling adventure through the river’s drops and rapids.

Infinity Falls includes the highest drop of any raft ride in the world – a full 40ft – and ends in Harmony Village, where the essential message of harmony with nature is firmly to the fore. Each raft will accommodate eight riders, and there will be 42-inch (107cm) height requirement. Will you get very wet? No, you’ll get soaked, say SeaWorld! 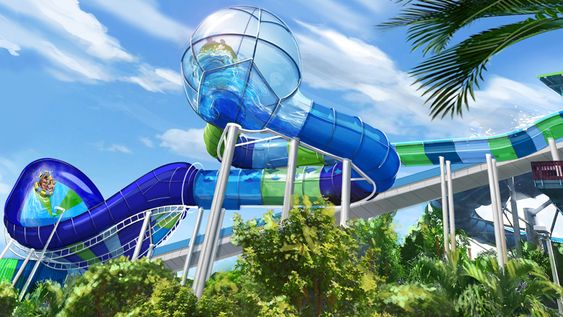 Over at SeaWorld’s sister water park of Aquatica, you know you’re going to get wet, and their newest ride will ensure whole new ways to enjoy the excitement next summer.

Ray Rush will be a three-part raft ride experience, starting six storeys high with a water-jet launch that sends riders spinning into a huge water sphere. After being suitably whirled, the raft then heads into a giant manta wing feature that offers a different path each time before a final splash-down.

Due to open in time for the summer season, this will give Aquatica a major new thrill to go with its existing collection of eight rides and slides, plus two wave pools and two lazy river features. 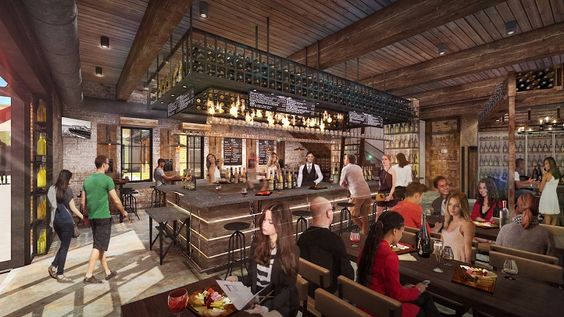 Walt Disney World’s wonderful district of shops, dining and entertainment has undergone an extensive expansion in recent years, and it will conclude in 2018 with SIX new major features, including the part restaurant, part nightclub vibe of The Edison, which opens on New Year’s Eve this Sunday.

This latter will offer its own themed bar as well as a lunch menu and family-friendly atmosphere during the day, but it will be for guests 21 and over only after 10pm, when the entertainment will include aerialists and cabaret artists.

If that doesn’t sound like your thing, how about one of the four new restaurants scheduled to open throughout the year? You will be able to take your pick of Wine Bar George (from master Sommelier George Miliotes), the all-new Tuscan cuisine of Terralina Crafted Italian, the Spanish dining and flair of Jaleo, and a completely new concept for the Wolfgang Puck Bar & Grill.

In addition, basketball fans will be able to enjoy the thrills and excitement of the NBA Experience, with interactive games and competitions, immersive elements, gift shop and restaurant. 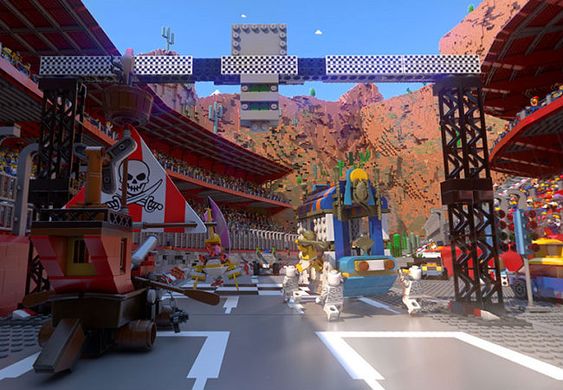 The fabulous LEGOLAND Florida park rarely misses a year to add a major new attraction, and 2018’s will be this exciting redevelopment of their Project X coaster, which will be converted to add virtual reality to the ride.

With the special headsets, the ride will suddenly become a rollicking race in the company of the LEGO characters, featuring a 360-degree environment and wacky vehicles that can fly as well as zoom over the land. It’s the first time the mini-figures have been incorporated into VR technology, and it promises to be a fun addition to the park’s superb array of attractions. 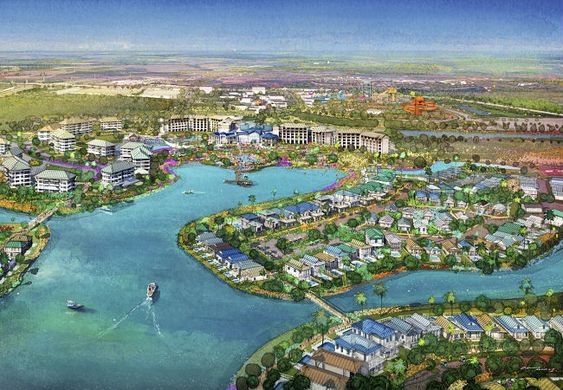 OK, so it’s not a theme park, but this amazing new development of hotel, shops, water park, Spa, live entertainment, holiday villas and condos on Highway 192 in Kissimmee might just as well be, for all the astonishing features being packed into its 300 acres.

It won’t open until November, but it is sure to attract plenty of admiring glances and, even if you don’t stay there, there will be a lot to enjoy for dining and entertainment.

As ever, it underlines just how much there is to do in this amazing place we call Orlando. So, are you booked yet…?!

What attraction are you most looking forward to in Orlando this year? Give us YOUR thoughts on our discussion forum on this link.