Orlando , Seasonal Events , Expert View Column
By ATD’s Florida Experts, Susan and Simon Veness
Everybody knows Mickey is throwing a very merry Christmas party, the Grinch is making Yuletide miserable and SeaWorld is…well…Celebrating. But did you know there are two ultra-festive non-park events that take place in December, and you don’t have to pay a penny to enjoy them?

We’re talking about Now Snowing (formerly Snowing Nightly) in the Disney-created town of Celebration and the annual Winter Garden Golf Cart Parade, now in its sixth year. Each offers a big dose of merry-making, and both represent the best of American community spirit during the Season of Joy.

Although Orlando does occasionally have a wicked cold snap that makes the locals go into stunned hibernation for a day or two, and temperatures can drop into the low 30s Fahrenheit (1C or lower) at night once or twice a year, we simply don’t get snow. But Christmas isn’t really Christmas without a distinct flurry of the white stuff—at least, if you live in the U.S.—so affluent Celebration, just off Highway 192 and I-4, makes its own ‘snow’ every night. What started as an enjoyable and, let’s face it, relatively warm blizzard on Main Street has become a full-fledged event. And it’s free (well, most of it is, anyway). 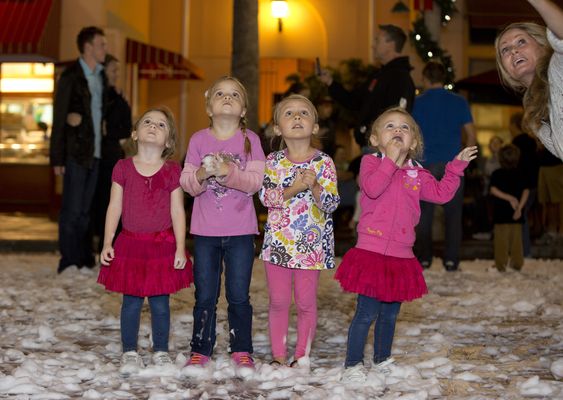 Carollers in Dickens-style attire stroll the streets, festive music plays over a speaker system, live bands perform and there is even an “ice rink” kids can skate on (for an additional fee, with skates included). Other paid-for opportunities allow you to have your photo taken with Santa, ride the Celebration Express train or a horse-drawn wagon around town, or snuggle under a blanket (if it’s too chilly for shorts and flip-flops) and enjoy a romantic carriage ride. There is even a carriage that looks like Cinderella’s elegant coach.

But just walking around the town centre is a treat, for its pretty decorations and cheery atmosphere. With Wonderland Cookie Dough Co., Kilwins fudge shop, Le Macaron, and Sweet Escapes Bakery, plus nine restaurants, it tastes good, too. 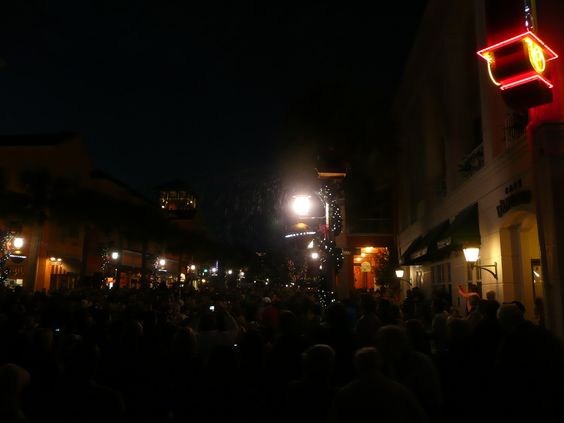 The hardest part about visiting Now Snowing is the parking situation, so it’s best to arrive as early as possible, perhaps having a 4pm dinner in one of Celebration’s fine restaurants, with an eye toward getting a decent parking spot. Arrive late and you’ll be driving around for a while waiting for someone to vacate their parking place. As lousy as mindless searching can be, in this instance it’s not necessarily a bad thing, since many Celebration residents go all-out with their decorating, and their houses are even more magnificent than usual. Some add sound effects, and one or two are even known to project Christmas movies onto the wall of their front porch. 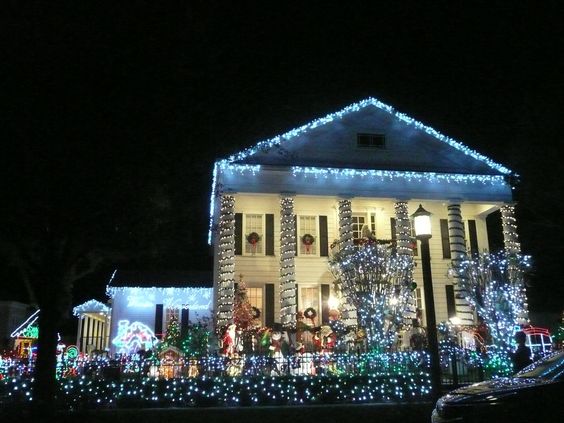 Now Snowing runs every night from the Saturday after Thanksgiving (25 November, this year) through 31 December, including Christmas Eve and Christmas Day, from 4pm through 10pm, with snow falls at 6, 7, 8 and 9pm. The one proviso here is that snow falls will not take place if the temperature is 35F (1.6C) or below, or if it’s raining heavily, so plan accordingly.

The skating rink opens at 4pm, and Santa Claus attends the opening night with a tree lighting ceremony on the event’s first evening. If you can’t make it this year, plan for 2018, when Now Snowing will celebrate its 20th anniversary.

The second reason to mark your holiday calendar happens in Winter Garden, located 17 miles north of Walt Disney World. This pretty little town held its first-ever Golf Cart Parade in 2011, with just 12 golf carts poodling along the high street decked out in their Christmas finery. This year, Winter Garden is dressed in about a billion twinkling lights, which make a stunning backdrop when more than 100 golf carts parade along the 1.2-mile route, from Bradford Park on East Division Street to Walker Fields, just off Smith Street. 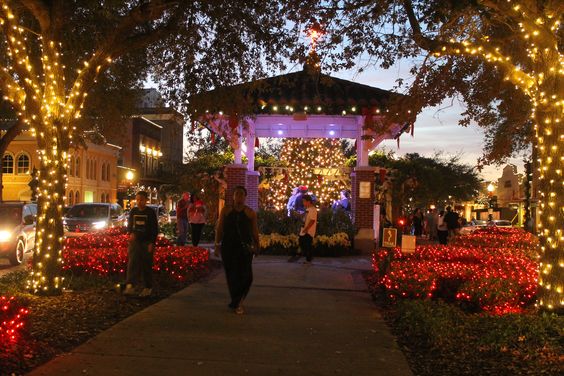 And this is no throw-together, homespun event, either. People take their cart decorating seriously, and it’s definitely a family project, with all hands on deck (thehallswithboughsofholly). Some of the most outstanding carts this year included the “Make it snow in Florida” theme created by the Callahan family, with mum, dad and their three boys dressed as snow-people, and the Mystery Machine, with its passengers dressed as ‘the gang’ from the cartoon, Scooby Doo. 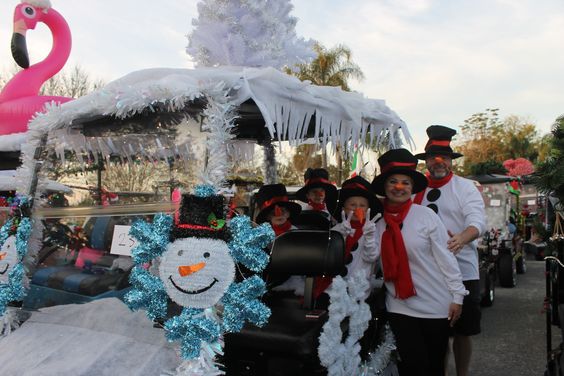 But even the humbler entries—such as the cart with a wrapped package on top and 4 pre-made bows stuck to the windscreen, and the inexplicable but hilarious tiny-car that looked like a ride-on lawn mower—garner crowd approval. And that might just be the best thing about the experience; everyone is jolly and joyful, and you feel like you’re a member of the community, if only for one night. It’s a wonderful, welcoming event that will definitely get you in the mood for Christmas, if you weren’t already. Everyone will wish you ‘Merry Christmas,” and you will feel full of the festive spirit.

Santa is there (actually, several Santas are there!), the Grinch puts in a good showing (again, several times) and even the dogs and the babies get into the celebratory style. 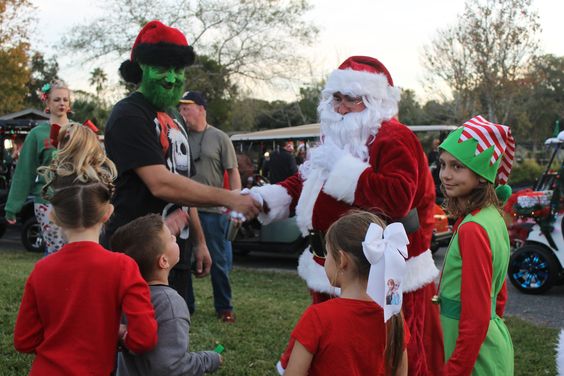 Participants driving in the Golf Cart Parade pay a $40 fee, but it’s worth the cost for the chance to win one of the Best Decorated Carts prizes and have bragging rights over your neighbours for the next twelve months, and be entered to win other prizes donated by local businesses. Even better? The money raised by the golf cart parade goes to the Edgewood Children’s Ranch, an academic and residency center for at-risk children that has been changing young people’s lives for the better since 1966. 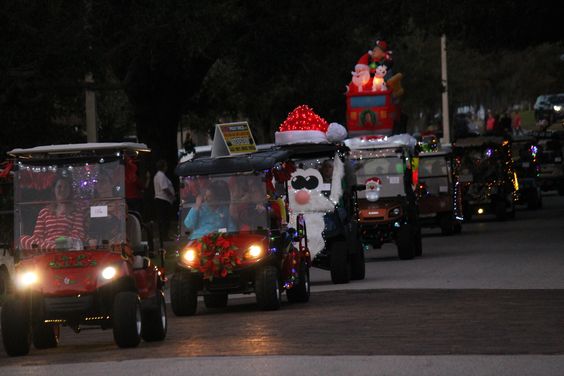 Winter Garden is about as close to “small town America” as Central Florida gets these days, and it maintains that distinction with lots of free community events, which really peak in November and December. From their day-after-Black-Friday event called Shop Small Saturday and Holiday Market, to meeting Santa, watching Christmas movies, enjoying live music or taking a horse-drawn carriage ride, each Friday and Saturday offers something festive, notably at the indoor Plant Street Market, which features our local favourite of the Crooked Can Brewery.

But there are other events throughout the year, so even if you’re not here in December, take an afternoon out of your holiday to drop by. It’s a delightful break from the theme parks, and a real sampling of local Floridian charm!

Tell us about the quirky things you love about Orlando by joining us on the ATD forums, on this link: https://www.attractiontickets.com/forum.