Orlando Previews The Rides of Tomorrow!

By ATD’s Florida Experts, Susan and Simon Veness
Our Florida journalists visited the IAAPA Expo, which showcases all the upcoming theme park news and brand new attractions. Here's a look at what the Orlando parks revealed....

When you want to know what the theme park rides of tomorrow will look like, come to Orlando during the mind-boggling IAAPA (International Association of Amusement Parks and Attractions) Expo, the annual fiesta of the international attractions industry – and prepare to be blown away.

We visited this year’s Expo, from November 19-23, and came away absolutely dazzled – if not, exhausted! – by the astounding array of amusement park previews, highlights and technology demonstrations that will all be coming to a park near you, soon.

Just to start with, this is a big event. No, make that HUGE. The massive Orange County Convention Center on International Drive is one of the largest of its kind in the USA, with exhibitions and events usually taking up the North section or the South. IAAPA takes both, plus they have an outdoor area as well. 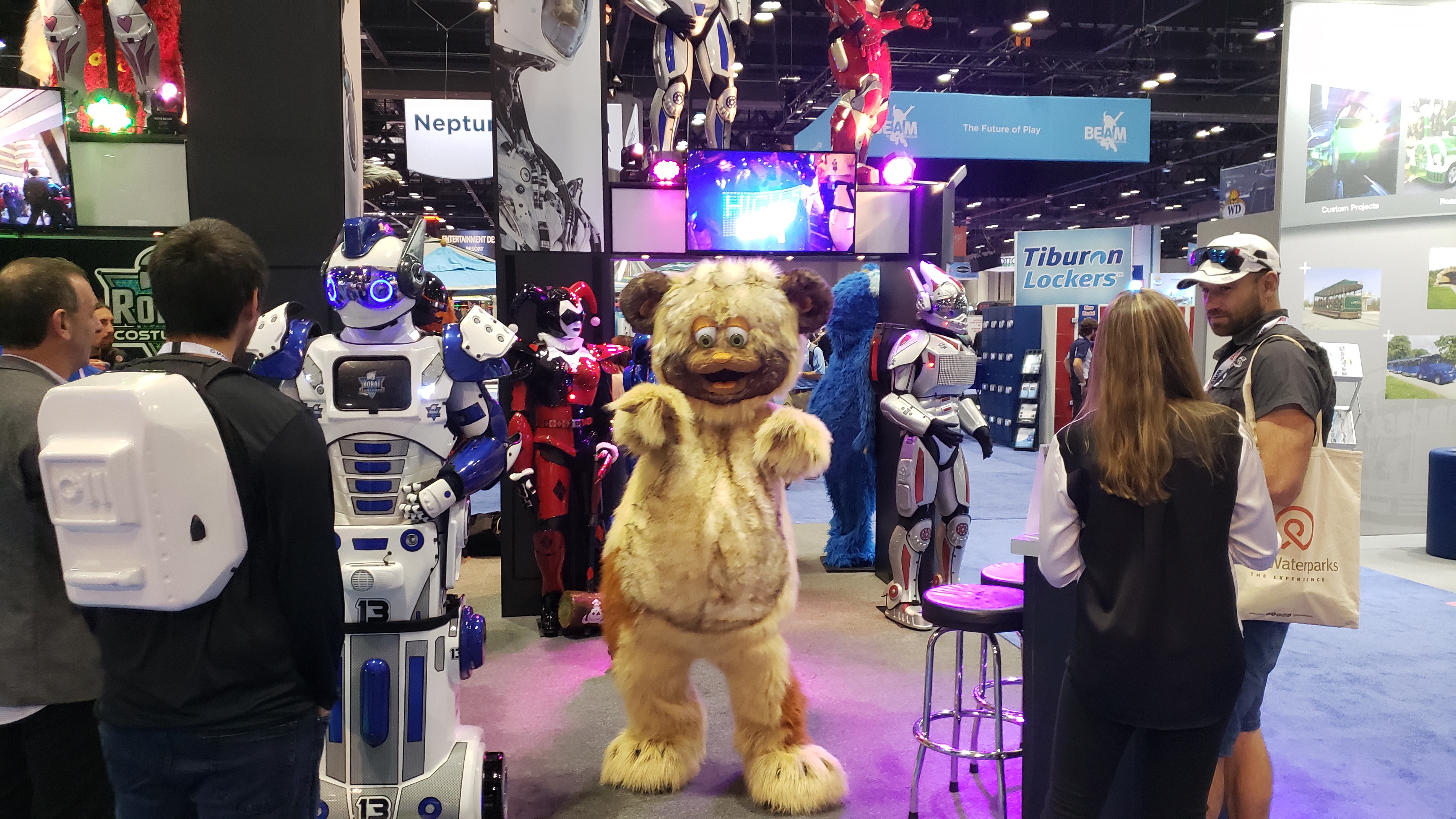 The facts of the show alone are amazing – there were 42,600 registered attendees; 1,146 different companies exhibiting; More than half a million square feet of exhibition space (almost 15 acres!); more than 100 countries represented; 1,150 individual booths; and all the biggest manufacturers of rides, water parks and arcade games worldwide, including China, South Korea and Japan.

Whole rides were set up in the main hall, along with extensive models, video screens, themed backdrops and animatronics – lots of animatronics. Company names like Zamperla, Triotech, Mack and Premier Rides may not mean a lot to the average theme park goer, but they represent the crème de la crème of the business; manufacturers who build rides for Disney, Universal, Busch Gardens, Thorpe Park and Alton Towers, among hundreds of others. 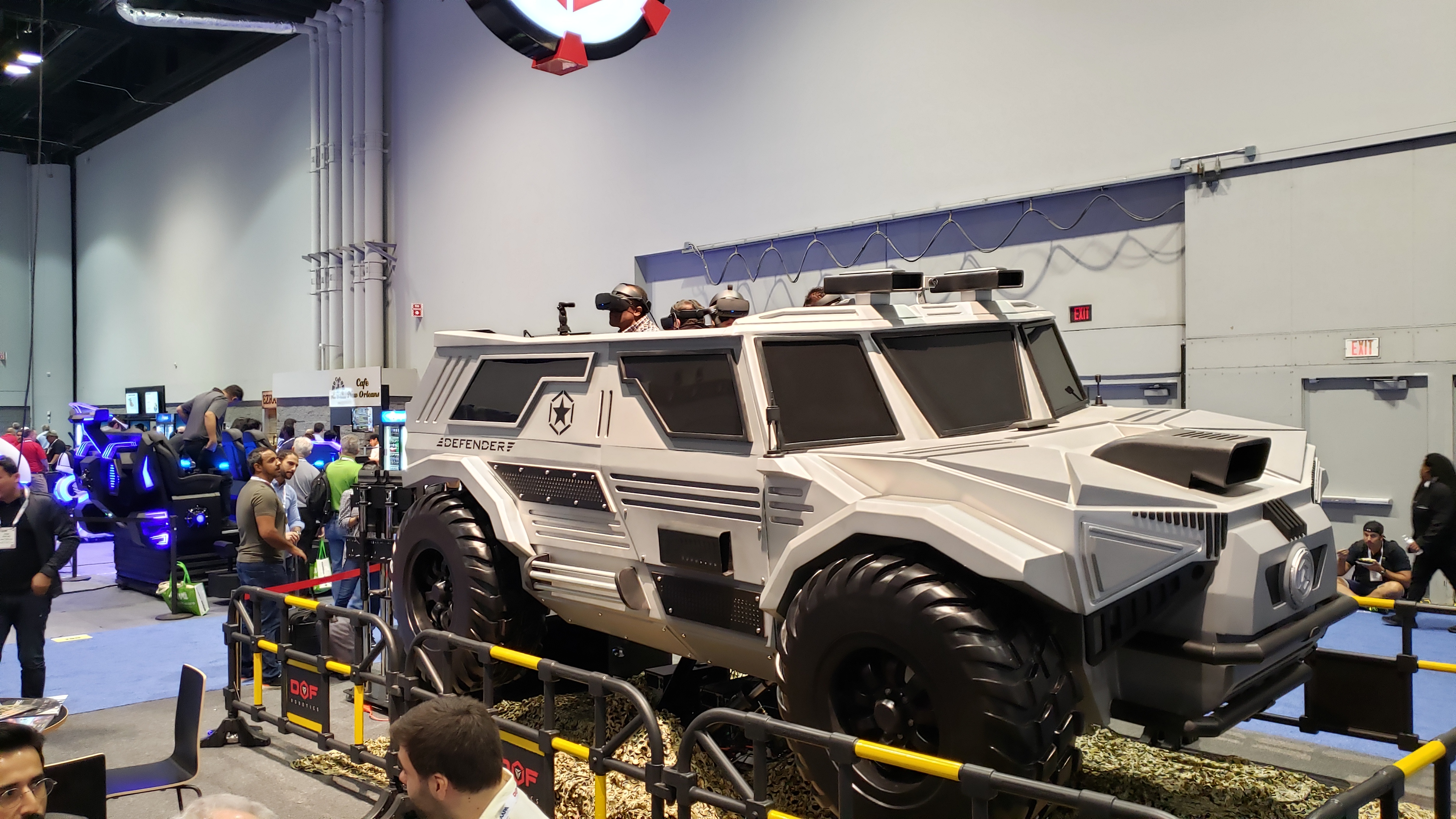 There were also a mixture of events and set-pieces; opportunities to try out the rides and point-of-view videos showcasing something new; and both high tech and old school elements rubbing shoulders with each other in a chaotic mix of old and new, the attractions of today and tomorrow.

We were surprised to see a lot of go-kart exhibits, albeit with some superbly sleek and stylish karts. We weren’t surprised to see a profusion of Virtual Reality displays, from just basic head-set designs to fully-fledged immersive environments, including one from DOF Robotics that featured a full-size futuristic armoured car complete with four seats for gunners in a completely convincing shoot-em-up setting, as well as another by BrainTap that promoted “the ultimate adrenaline recovery experience” for those who get totally frazzled by all their theme-parking.

The first day of the Expo is also a big opportunity for businesses to show off ride vehicles that we will see in action in the coming months. Fully 38 companies made new product announcements directly from the show floor, and these included: 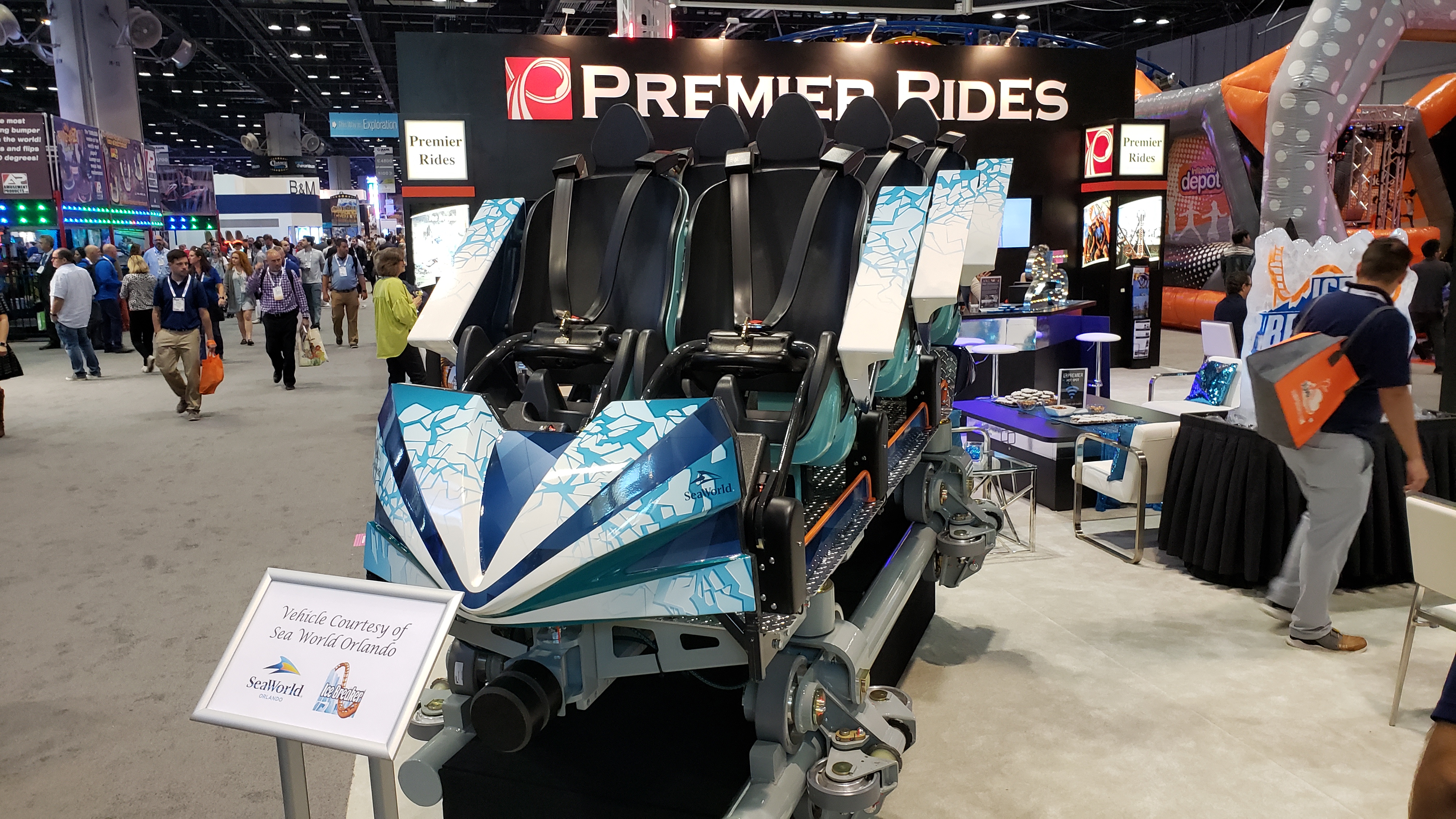 SeaWorld Orlando: The new Ice Breaker coaster (for spring 2020) is a collaboration with Premier Rides, and the two companies unveiled the sleek ice-blue car that will be the key component of this multiple fast-launch ride. Premier Rides president Jim Seay insisted: “All the time you’re doing these amazing launches, you’re going to be having amazing airtime moments. This ride is going to kick it.”

LEGOLAND New York: This brand new park opens on July 4, 2020, and one of the feature attractions will be the Lego Factory Adventure Ride, where guests are ‘shrunk’ to the size of a Mini-Figure and undertake a thrilling trackless vehicle journey into the Lego world. It is a collaboration between Legoland, ETF Ride Systems and Orlando’s experiential design company, Holovis. 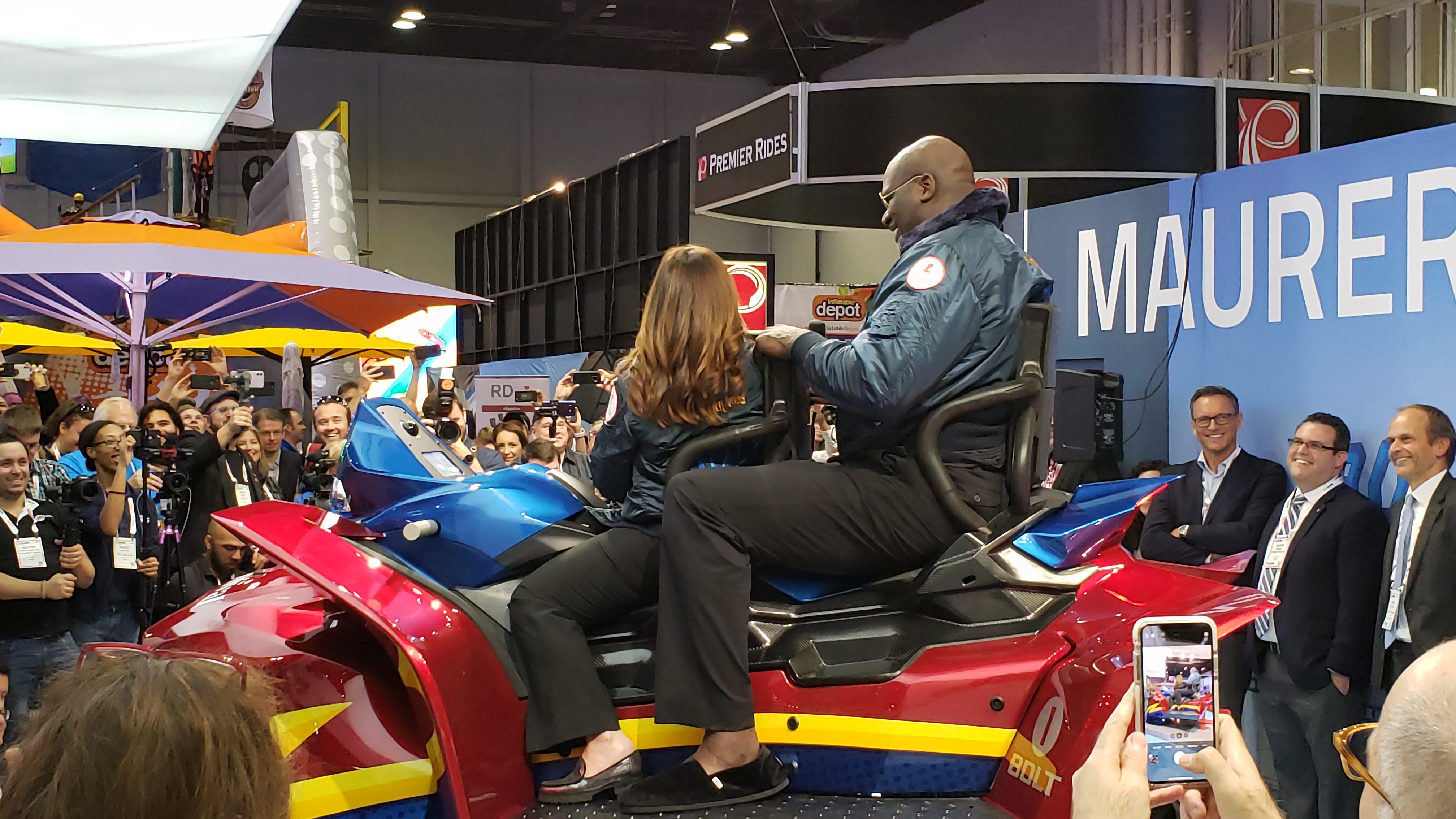 Carnival Cruise Line: The world’s biggest cruise line will launch the first roller-coaster at sea – Bolt – aboard their Mardi Gras ship in August 2020, and they took the wraps off the ride cars at the Maurer Rides booth with the help of CFO (Chief Fun Officer) and basketball legend Shaquille O’Neal, who managed to squeeze his 7ft 1in frame onto the vehicle with Carnival president Christine Duffy (just 5ft!).

Knott’s Berry Farm: In conjunction with Triotech, the family-owned theme park in Anaheim, California, announced an all-new, 4-D interactive version of its classic 1970s ride, Knotts Bear-y Tales: Return To The Fair, for its 100th anniversary next summer, featuring scenic theming, animation and gaming for a modern take on an old-school attraction that is sure to be a big hit with fans. 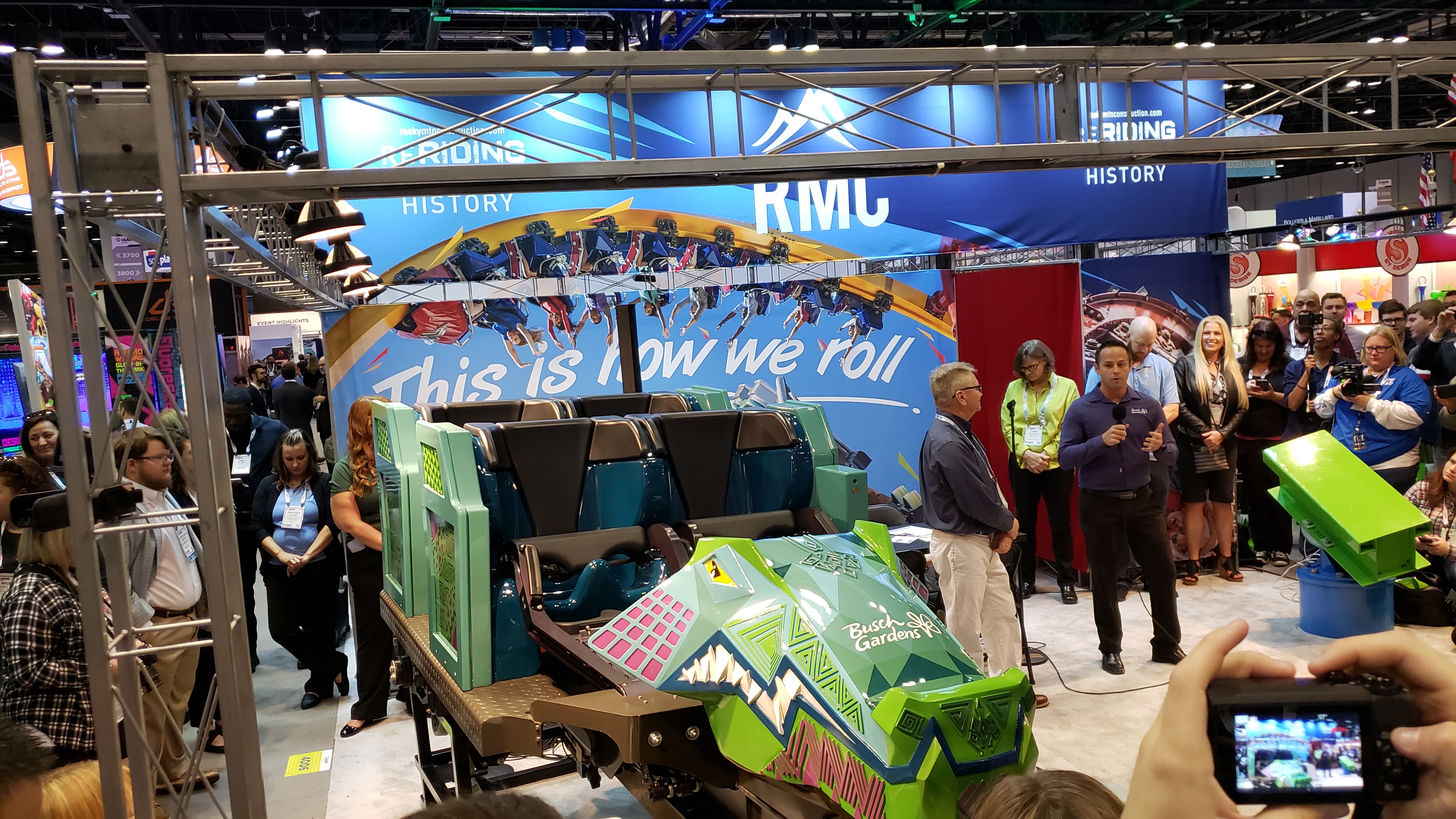 Busch Gardens: Back in Florida, the big Tampa theme park will be opening Iron Gwazi in 2020, and, thanks to design partners Rocky Mountain Construction, we were given our first look at the coaster cars, which are actually crocodile-themed, unlike the previous version of Gwazi, which had a Lion-Tiger theme. The new cars look pretty slick, though, and should definitely add extra edge to the fastest wood-steel hybrid coaster in the world.

If those were the headline moments of the Expo, there were dozens of other vignettes spread throughout virtually every square inch of the extensive Convention Center.

Our minds were boggled by one new coaster design from the SBF Visa Group, the Big Air Coaster, which featured a circular car at the front of the train that actually revolved through a full 360 degrees like a giant hamster wheel as the ride went over each dip in the track. We had no idea what it must have felt like, but it looked disturbing! 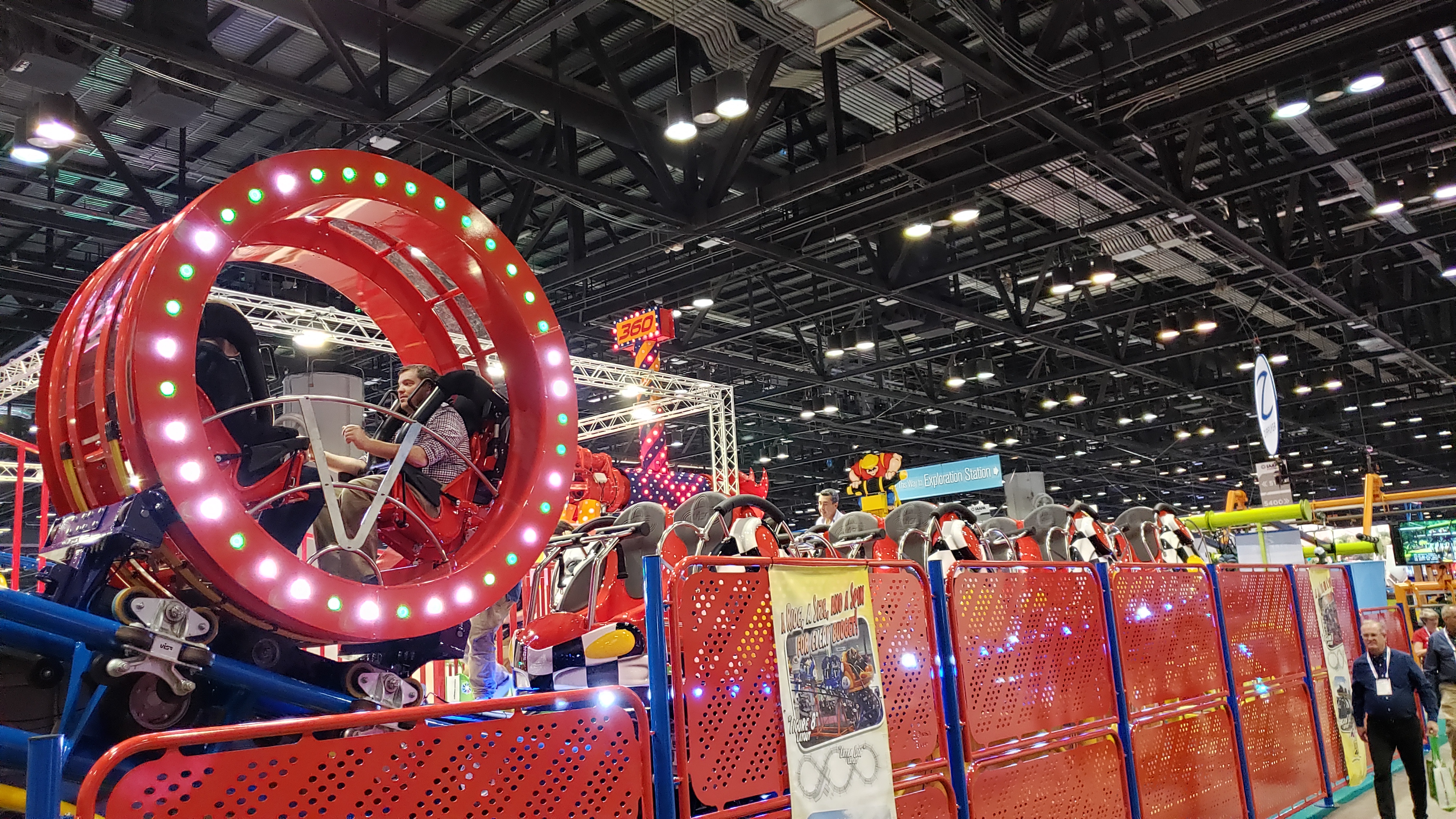 And then there was the novel Nebulaz ride from veteran Italian manufacturers Zamperla, which had four separate arms with seats for four riders at each end that rotated on four different axes at the same time, creating a whirling dervish effect, again with maximum spectator value.

But it wasn’t just the large-scale rides and attractions that were so fascinating. One section of the Expo was dedicated to food vendors and their latest gadgets, which included a clever individual self-serve popcorn maker, plus waffle-makers, ice-cream dispensers, hot-dog machines and even a cooker that produced ‘hot-air’ fried foods without any of the usual grease (great for chips!).

We were harassed by animatronic velociraptors and friendly gorillas; dancing bears and robotic meet-and-greet machines. We had our faces printed, super-hero style, on the cover of a Guardians of the Galaxy comic-book. And we watched as vendors demonstrated special effects machines that produced smoke-filled bubbles, fog and ‘liquid fireworks’ (actually a clever fountain show). 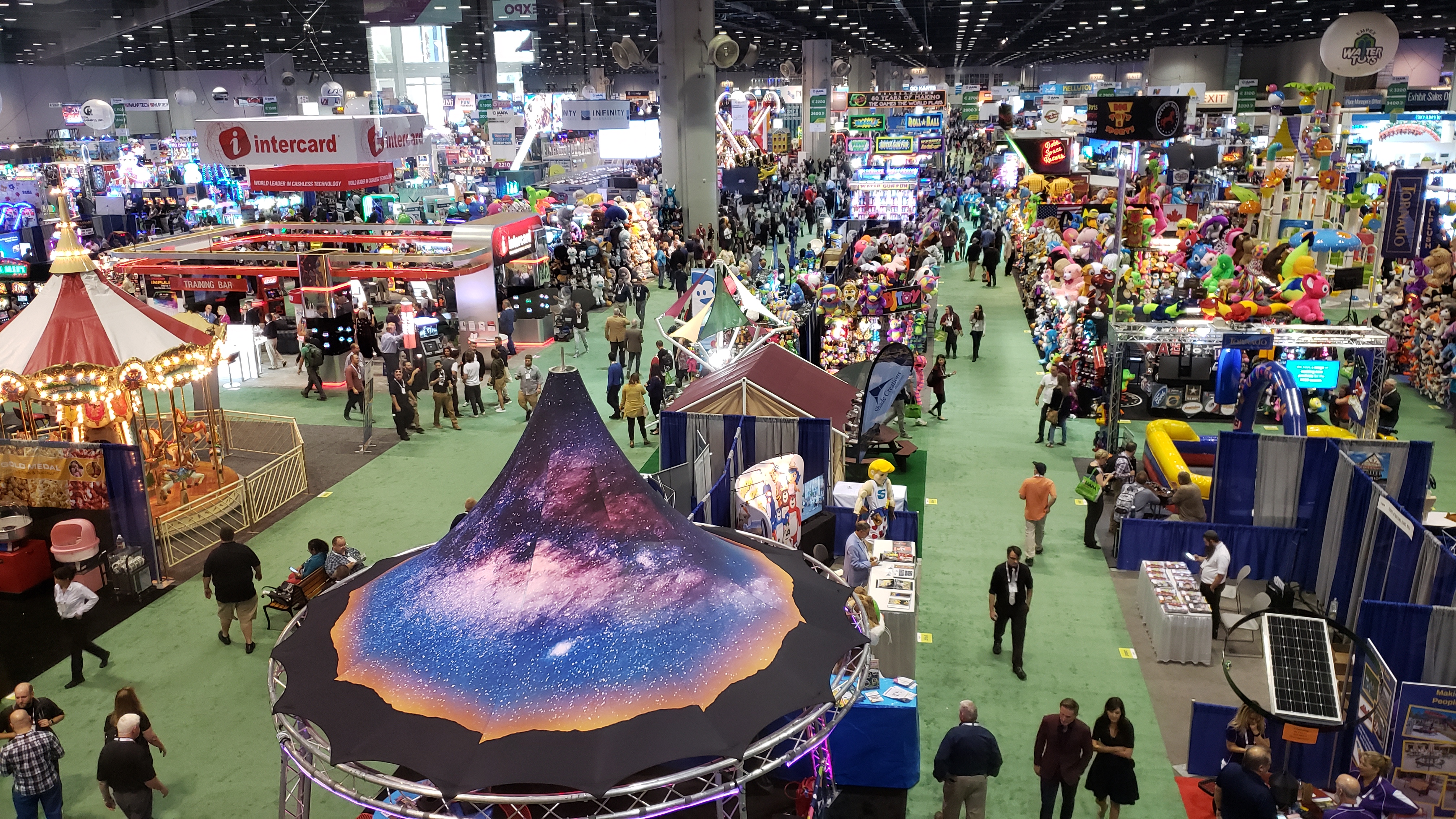 And, even after three days of press conferences, announcements and walking around and around the vast Expo floor, we still didn’t fully get to grips with this enormous convention and all its 1,150 booths.

But we definitely have a new-found respect for all the different and varied aspects that go into our theme parks and amusement parks – and we’ll be keen to see more, next year!

What theme park innovation or new ride most interests you? Come and tell us about it on the friendly ATD forums.