Halloween Horror Nights at Universal Orlando Resort , Orlando , Seasonal Events , Expert View Column
By ATD’s Florida experts Susan & Simon Veness
There’s no mistaking the ‘sounds of October’ around Universal Orlando right now. There are shrieks, screams and howls; chainsaws, axes and things that go ‘bump’ in the night. And it all adds up to another thrilling presentation of Halloween Horror Nights.

Universal’s annual fright-fest is in full swing on select nights until November 4, and it is especially entertaining this year as those fiendishly creative people from the Studios’ dungeon of depravity have come up with a unique collection of haunted houses and scare zones.

In fact, after our own trip down HHN Avenue this week, we thought it would be worth highlighting just how much out-and-out make-believe horror has been added to the monstrous menu for the delectation of all concerned.

Just as a quick recap for those not familiar with Universal’s annual Halloween spectacular, HHN27 (the 27th year of this phenomenon) is a special after-dark presentation in the Studios park that mixes genuine horror-film special effects with their own array of scare-actors in various set-piece arrangements in either Haunted Houses (indoor mazes) or Scare Zones (outdoor areas full of roaming scare-actors). 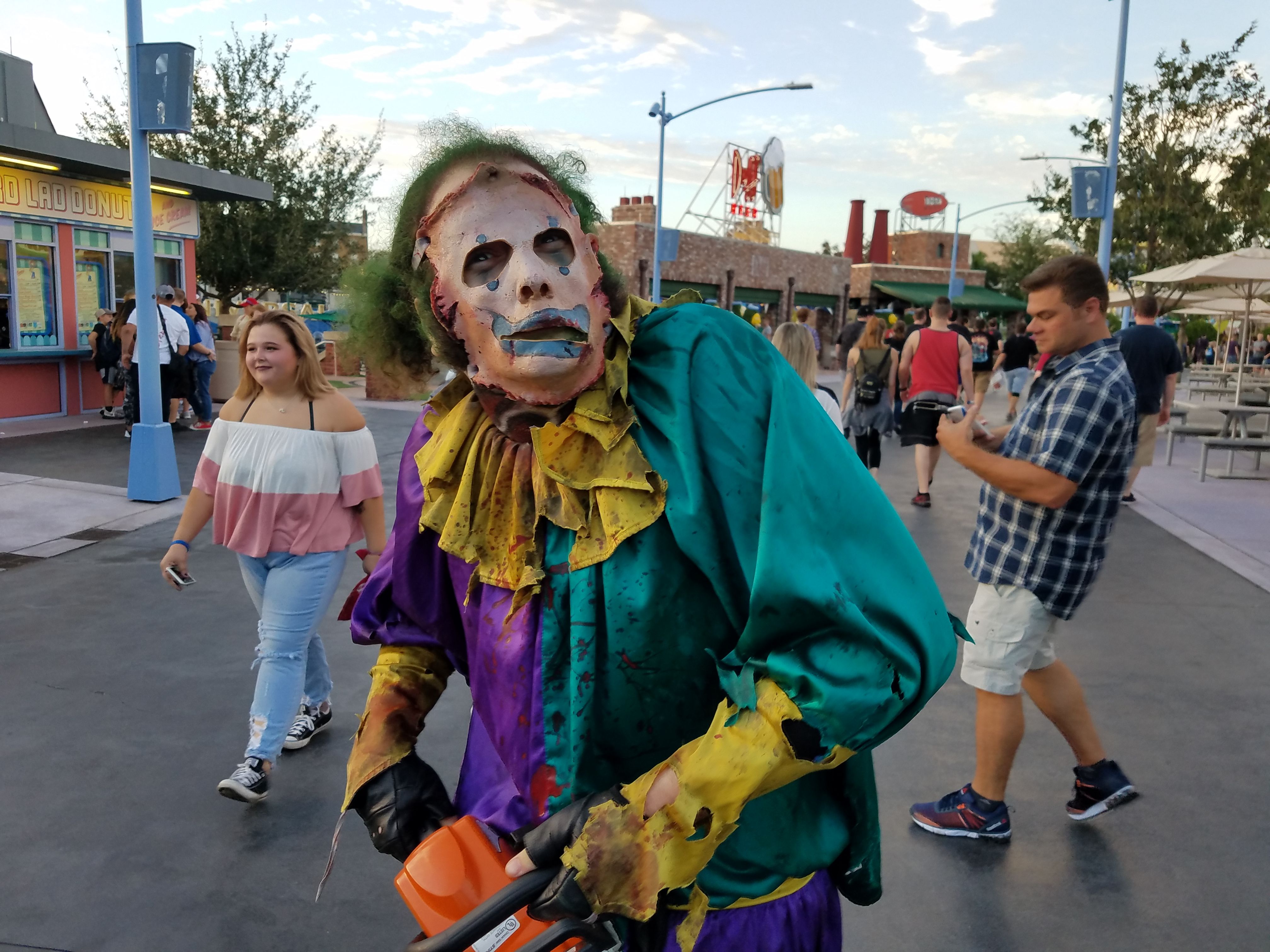 This year there are fully nine Houses and five Scare Zones – the most ever – as well as two mustn’t-miss shows in the shape of Bill & Ted’s Excellent Halloween Adventure (in its final year) and the high-energy dance style of Academy of Villains. Every one of the Houses (and Scare Zones) is new this year, so let us mark your card in advance for what’s in store, with the Scare Factor of each…

Saw: The Games of Jigsaw

Gore? Check. Torture? Check. Screams? Double check. This is just about the pinnacle of over-the-top horror movie frenzy, with all the iconic moments from the Saw film franchise shoe-horned into one long trail of bloodthirsty mayhem. Definitely not for the squeamish (or faint-hearted!), this House underlines why Universal insist their Horror Nights are not recommended for children under 13, and parental guidance is strictly advisable on that score. Scare Factor (out of 10): 9. 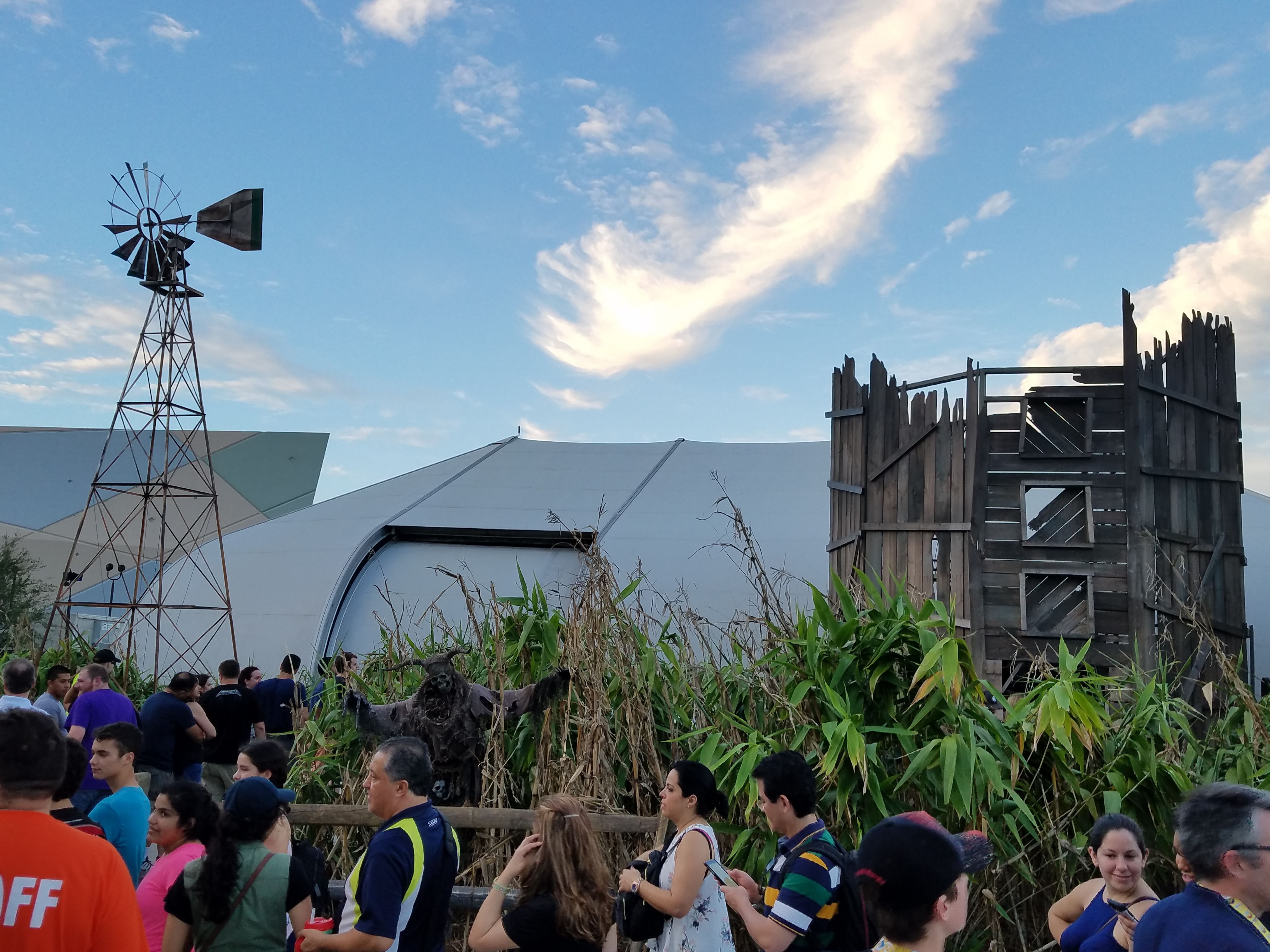 Universal’s scaremongers have unearthed another real gem with this original House that transports guests into a deadly farm – complete with ominous corn field and hideous scarecrows – chock-full of scare-actors who are determined to give you the fright of your life. It is also extremely dark (as in pitch black) in places, while the threat of the evil crows above you makes for an unnerving experience for anyone who has seen Hitchcock’s classic, The Birds. Scare Factor: 9.

A real Universal original, this takes the basic premise of a journey into the voodoo-plagued bayou of Louisiana, with the external façade of a wrecked steamboat taking visitors into an ever-darker world of mysticism and menace. Right at the heart lies the sinister Voodoo Queen, in an increasingly complex and detail-laden realm of evil foretelling that is even better if you can slow down and appreciate the gloomy setting. Scare Factor: 8. 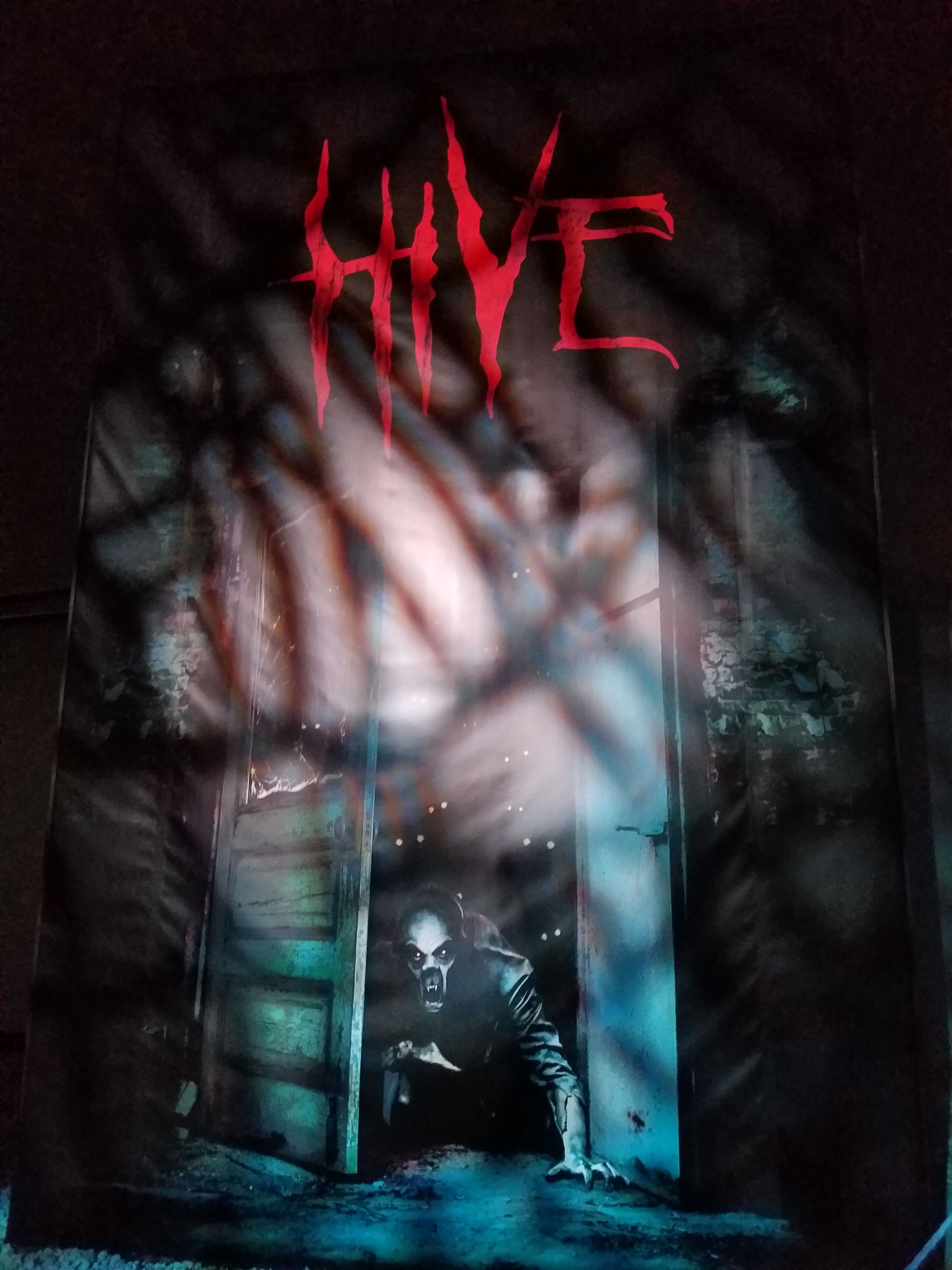 We’re also in all-new territory from Universal’s creative team here, a relatively mild and rather confusing House that starts out as a standard gore-fest but quickly becomes a nightmare plunge into a vampire-infested world that features some of the more eye-catching touches, like a character with a purple light-up face and a bookcase that opens up unexpectedly to reveal the creature within. Scare Factor: 8.

The designers have teamed up with this hit TV show to produce another iconic series of terror-ific scenes from programmes such as Roanoke, Coven and Asylum that again go full throttle for the grim and grisly. The opening setting, from the Asylum, is among the most graphic and scintillating of the whole HHN pantheon and sets the mood for characters like Bloody Face and the deranged doctor. Scare Factor: 8. 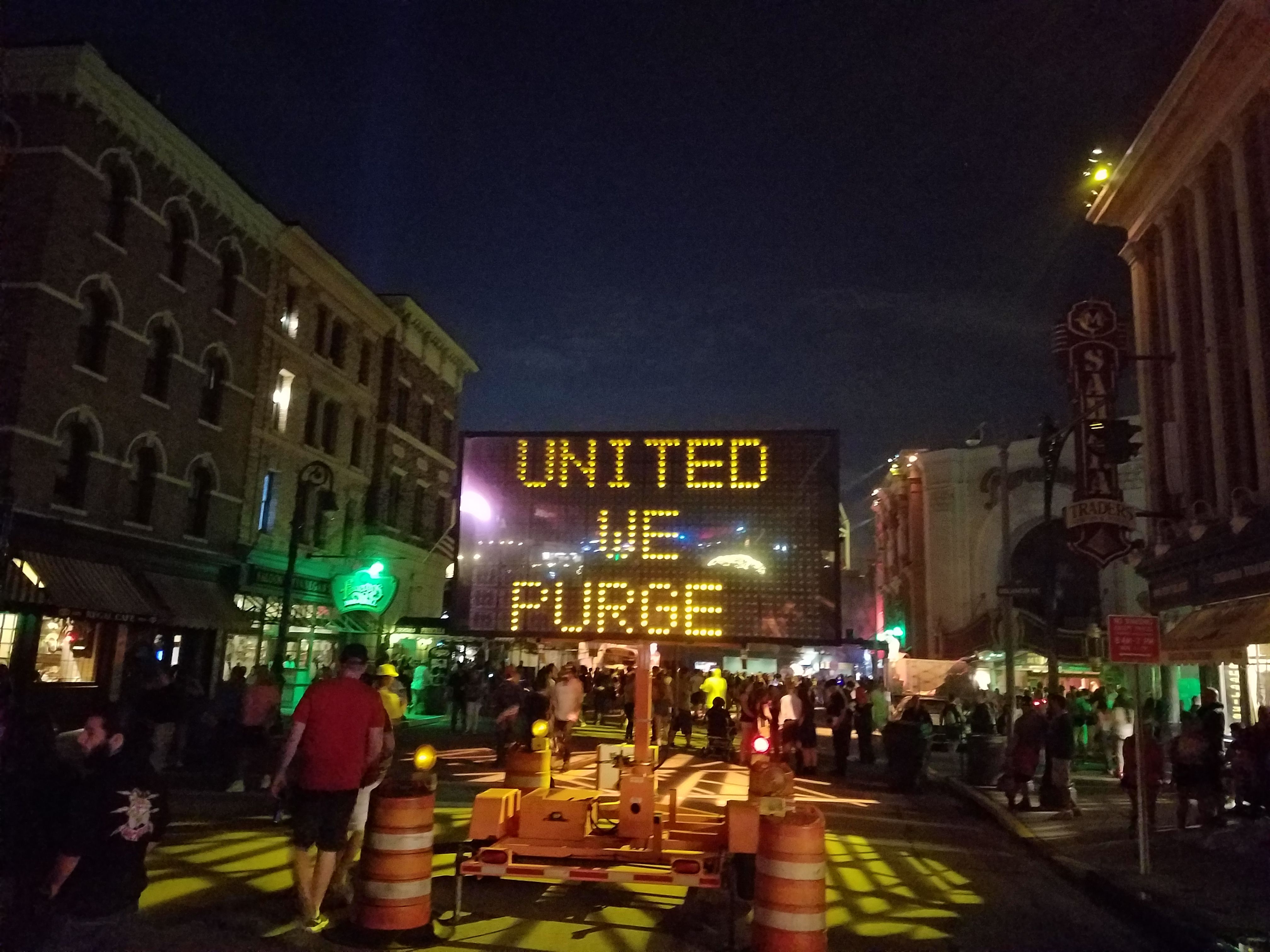 The specialists of the Blum horror film house have joined forces with Universal to bring their most ‘insidious’ ideas to 3-D life in this House that merges several of the Blum catalogue into a distinct trail of terror, forcing visitors to revisit key scenes from The Purge, Sinister and, of course, Insidious. A bit chaotic in places, it still dials up the right level of dread and panic for those brave enough to set foot through the door because, of course, there’s no going back once you’re in! Scare Factor: 7.

Universal have revived one of their previous hits, Gothic, in a new format, providing a novel setting for the giant bat-winged beasts that are genuinely startling as they zoom around and above you. This is without doubt one of THE great settings in this year’s Houses, and you will truly shriek with terror (or delight, depending on your sense of humour!) as the whole edifice seems to come to life at one point. Scare Factor: 9. 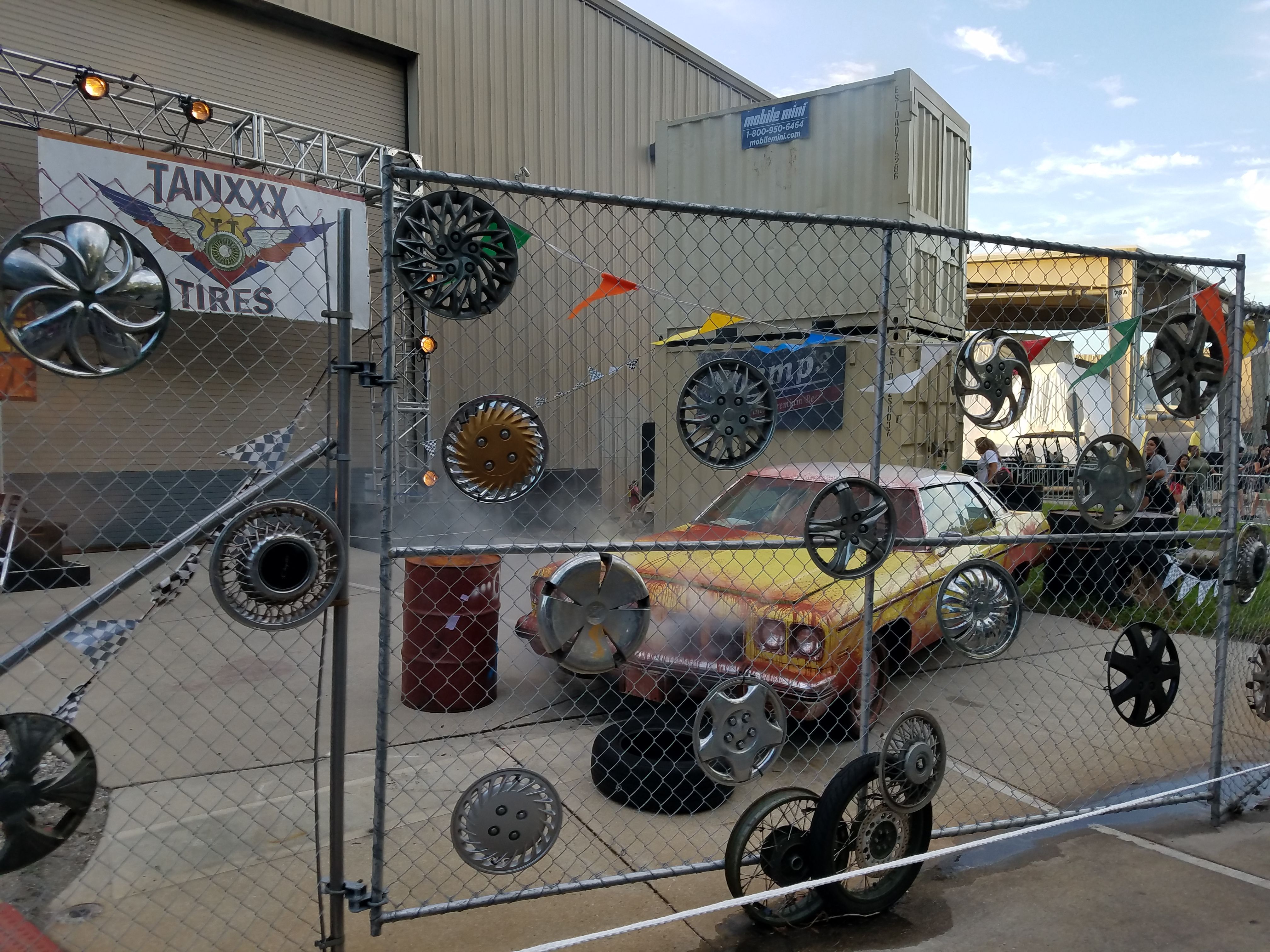 It’s time for another shock-horror TV franchise as this popular series gets a full airing in its comic-terror style, courtesy of lead character Bruce Campbell and his chainsaw-hand. The laughs come from the increasingly grisly ways Bruce manages to take care of the zombie hordes, while also producing several moments guaranteed to make you jump. The finale scene, with chainsaw guy opening a keg of beer is well worth coming in to see on its own! Scare Factor: 7.

Okay, so there’s just no escaping the sheer drama and total shock effect of this film classic, which finally joins Universal’s line-up of big-name fright attacks, which have included American Werewolf in London and Friday The 13th in the past. If you’ve never seen the Jack Nicholson-led movie some of this may pass you by, but for anyone petrified by the ‘Here’s Johnny’ moments of pure terror, this is as gloriously thrilling as it gets, highlighted by the silent menace of the Grady Daughters and set-piece moments like the ghost-filled Gold Room and elevators of blood. Scare Factor: 10. 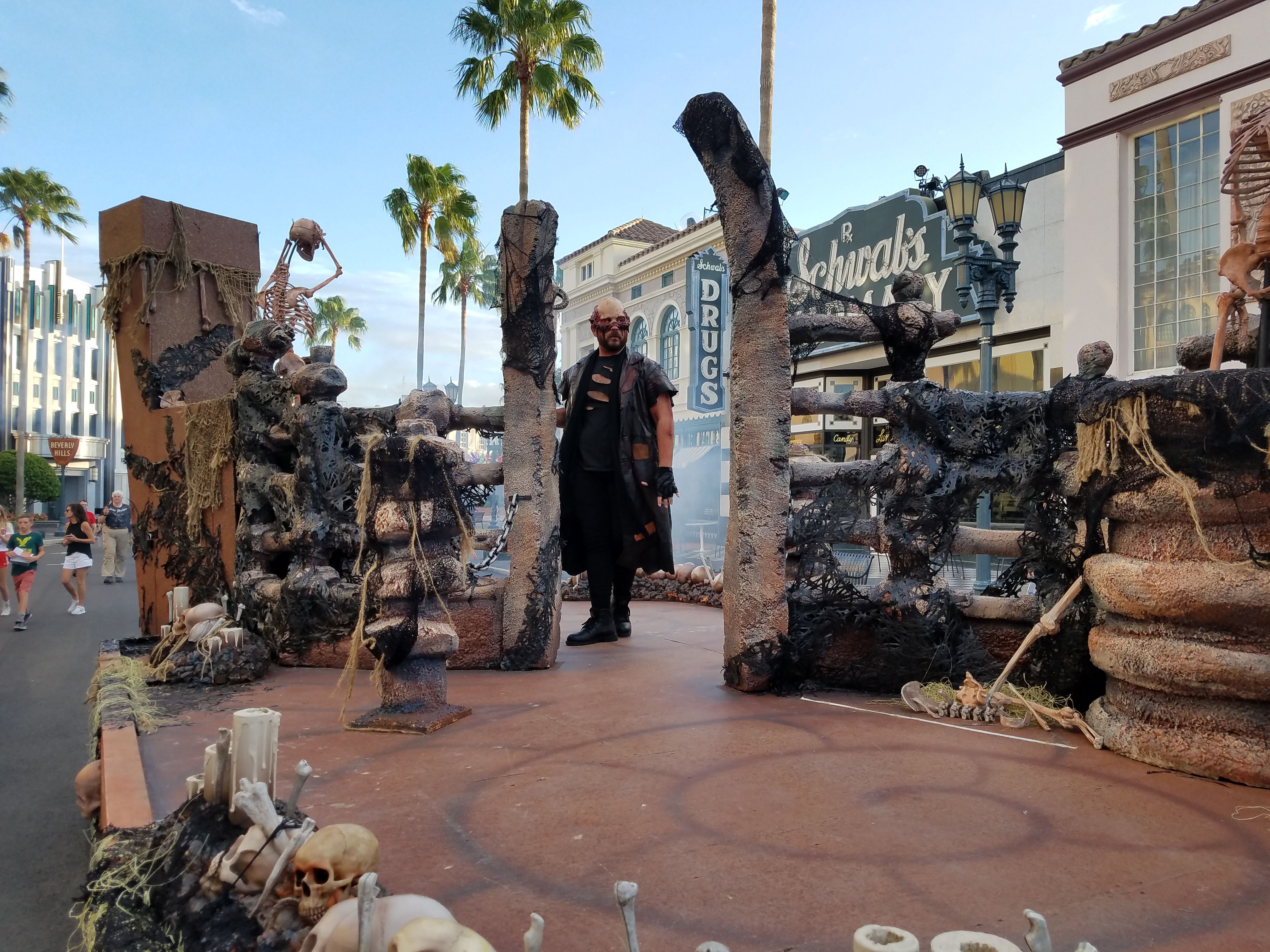 Finally, those Scare Zones. There’s no escaping them. They range from The Purge to Altars of Horror, which is a kind of montage of all the Houses and their terrors within. If anything, they provide an even more atmospheric touch that you can really enjoy at your own pace, especially if you’re not the one the scare-actors pick on!

Halloween  Horror Nights is popular. Like mega-popular. It gets seriously crowded at the weekends, and even week nights can see queues of an hour or more at many of the Houses. Arrive early (before the official 6.30pm opening) and do the big-name productions – like The Shining, American Horror Story and Saw – as soon as you get in. Save the shows for later on. 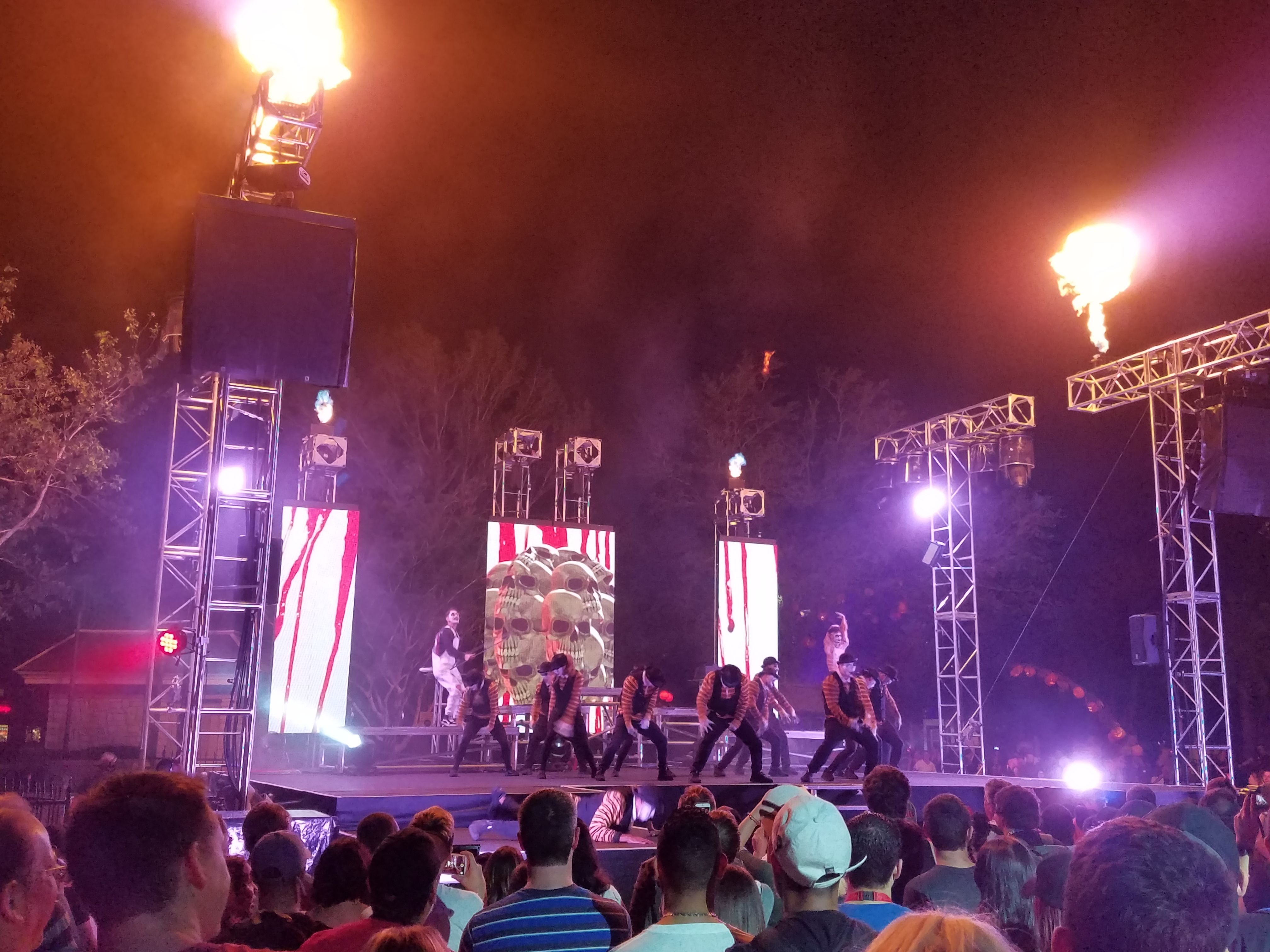 One final recommendation – don’t miss the Academy of Villains show. Seriously. This has quickly become one of the jaw-dropping highlights of the whole HHN programme, with a 20-minute presentation by this outrageously talented dance ensemble who spin, stomp, gyrate and tumble to a range of powerful backing tracks, interspersed with an array of special effects and other tricks that leave you breathless in appreciation.

Have questions about Halloween Horror Nights or any other theme park queries? Be sure to come over and ask us on the Attraction Tickets Direct forums, on this link.