Yes, it’s Christmas at Universal Orlando, only we’ve never seen the theme parks look quite like this before, and much of that is down to the latest in holiday fun and imagination from a certain world of Harry Potter. Both worlds, in fact, in Universal Studios and Islands of Adventure.

We were at the big media preview this week, and we’re here to tell you there is some real wizardry on display, as the creative team brings Hogsmeade, Hogwarts and Diagon Alley to life like never before. And, after seeing the show for the first time, we have just two words: Oh my!

It has taken seven years, but now we finally get to enjoy the Wizarding World of Harry Potter in its Christmas finery. Yes, yes, we know that the Hogsmeade village area in Islands of Adventure already has a ‘snowy’ overlay (thanks to those clever creative people), but we have been denied the full festive experience. Until now. 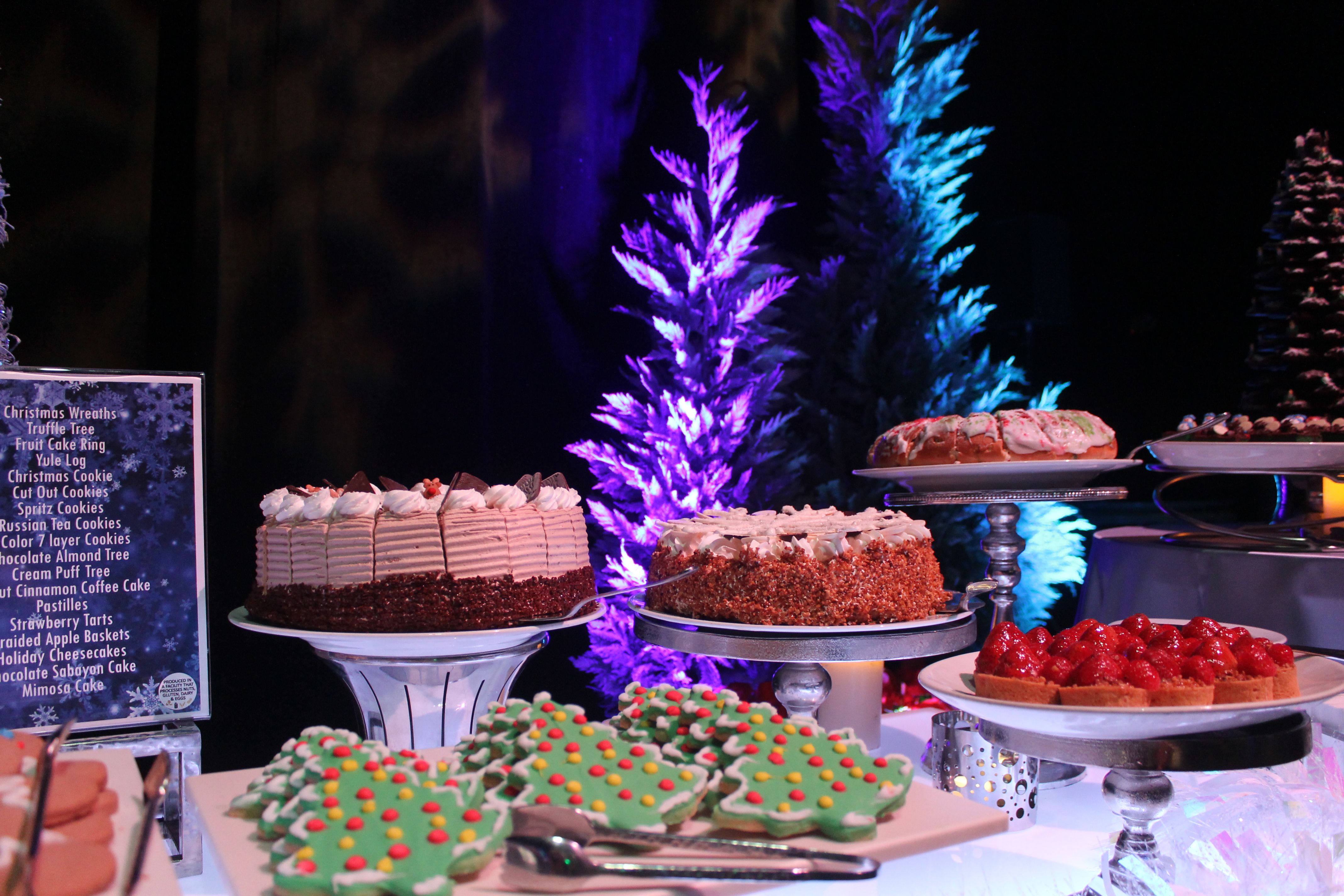 The whole epic programme goes ‘live’ tomorrow night (November 18) until January 6, but we can give you the full lowdown on the ‘Harry Potter Christmas Effect’ thanks to the special preview.

The first thing we’d say is that it has certainly been worth the seven-year wait. The Magic of Christmas at Hogwarts Castle is the new centrepiece of this special celebration of Yuletide fun, and it is definitely one of the most dazzlingly brilliant presentations you will see this Yuletide.

As Universal’s Senior Director Entertainment Creative Development Mike Aiello explained: “This is the most massive change we’ve done to our holiday programme in more than a decade. Between all the content that we’ve put into the Wizarding World and our brand new Universal Holiday Parade featuring Macy’s, this is a huge scope for us, and we’re super-excited that people are finally going to see it after nearly two and a half years of work on our part.” 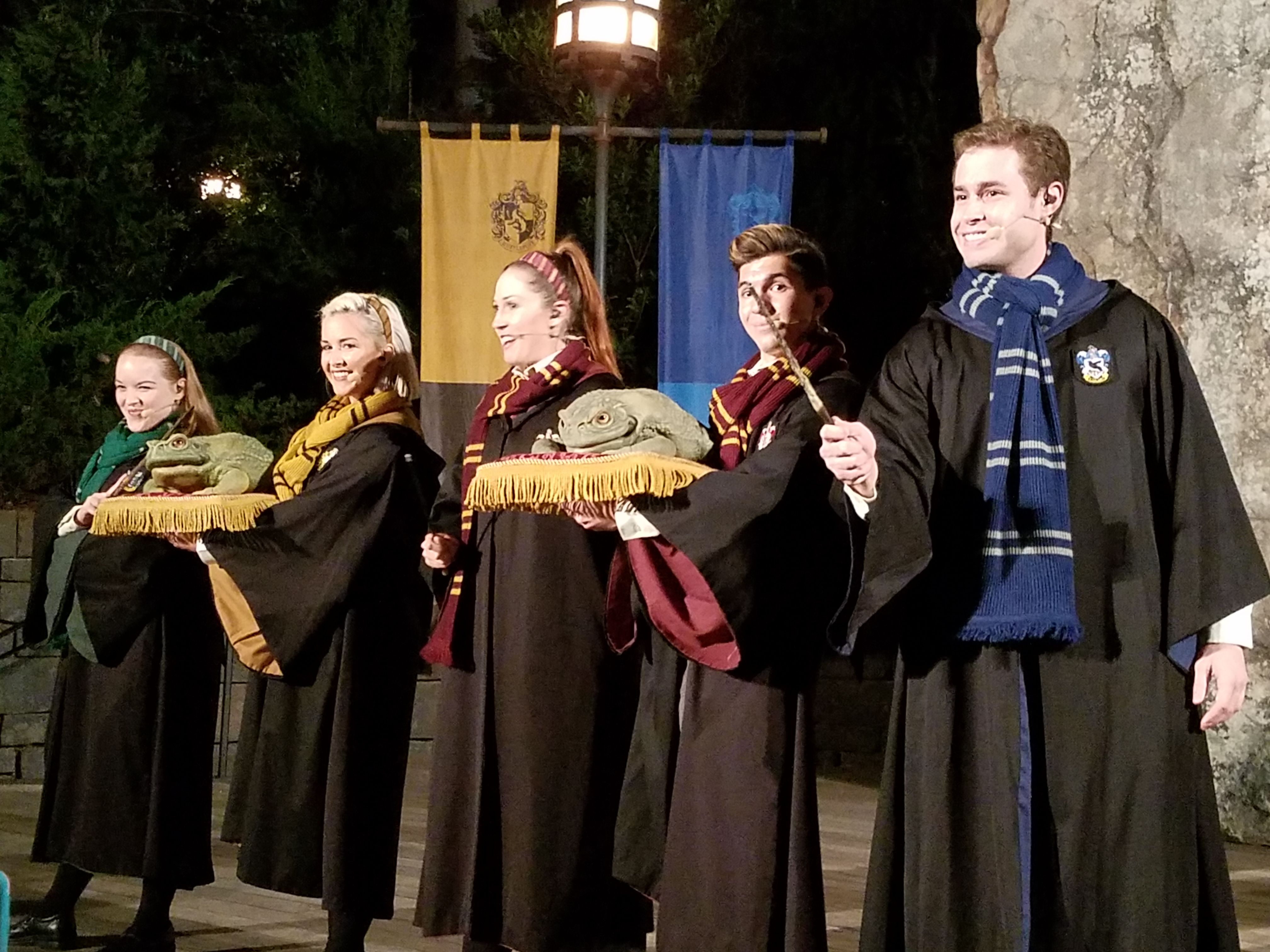 Just to start with, there is new seasonal live entertainment in the two Wizarding Worlds (Diagon Alley in the Universal Studios park, and Hogsmeade/Hogwarts at IoA).

The regular Frog Choir on the Hogsmeade stage have a new three-song performance routine, including the amusing ditty ‘The Most Magical Yule Ball Of All,’ while over at Diagon Alley, Celestina Warbeck and the Banshees now take to the stage with an all-new set that includes the seasonal show-stopper, ‘My Baby Gave Me A Hippogriff For Christmas.’ 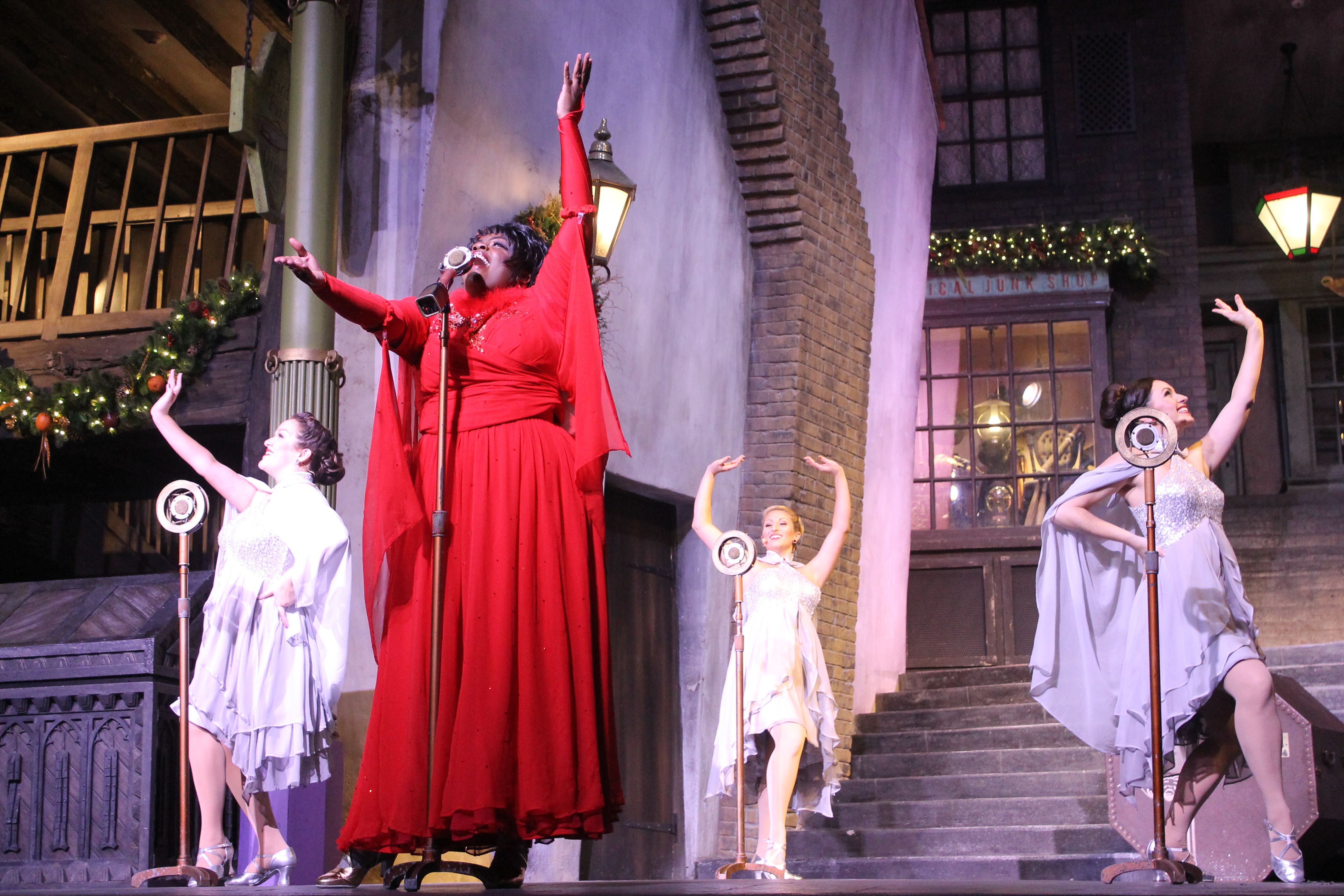 The new level of Christmas decorations also need to be seen to be believed. Diagon Alley is a brilliant creation at the best of times, but, with the added festive layer, this is now one of the most scintillating sights in Central Florida, while Hogsmeade Village is aglow with miles of wreaths, garland, tinsel and fairy lights.

Aiello added: “This is something we’ve wanted to do since the Wizarding World opened in 2010. Christmas exists in the fiction and the films, giving us some amazing scenes, in and around Hogwarts Castle and, for the first time, our Castle takes on the same qualities. The same attention to detail and level of authenticity that goes into the land has gone into every piece of garland, and the ideology behind it is that the shopkeepers created it for themselves, and it all comes to life at night.

“The big moment, though, is our all-new map-projection show on Hogwarts Castle. This has been truly an amazing journey to create and we think it’s a really beautiful show. You see the Castle become the Yule Ball and other iconic scenes, and it ends with an amazing visual of Hogwarts completely decorated for the holidays.” 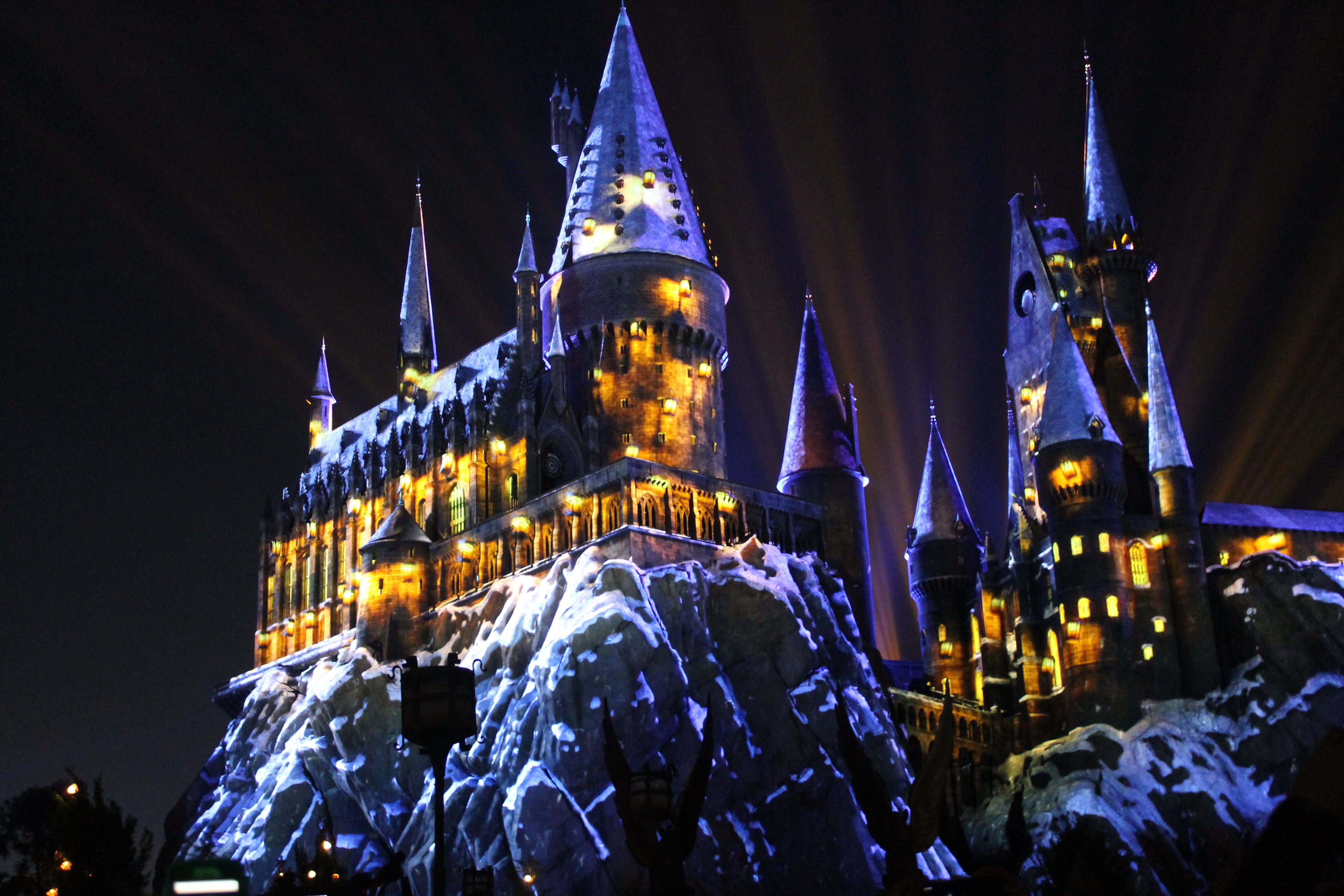 He’s not kidding, you know. We were treated to not one but two showings of the ‘Magic of Christmas’ and we were completely overwhelmed both times. It starts in attention-grabbing style with a huge snowy overlay on the Castle, projected by their new, state-of-the-art projection-mapping cameras, and it just gets better and better.

In little more than six and a half minutes, a whole kaleidoscopic montage of Christmas finery envelops the Castle, all drawn from the Potter stories, and it provides such an intense, sharp series of three-dimensional images that you are both astonished and dumbfounded at the same time.

As it fades away after the big festive finale, the Castle returns to its peaceful, snow-covered façade that looks simply superb against the dark night sky. 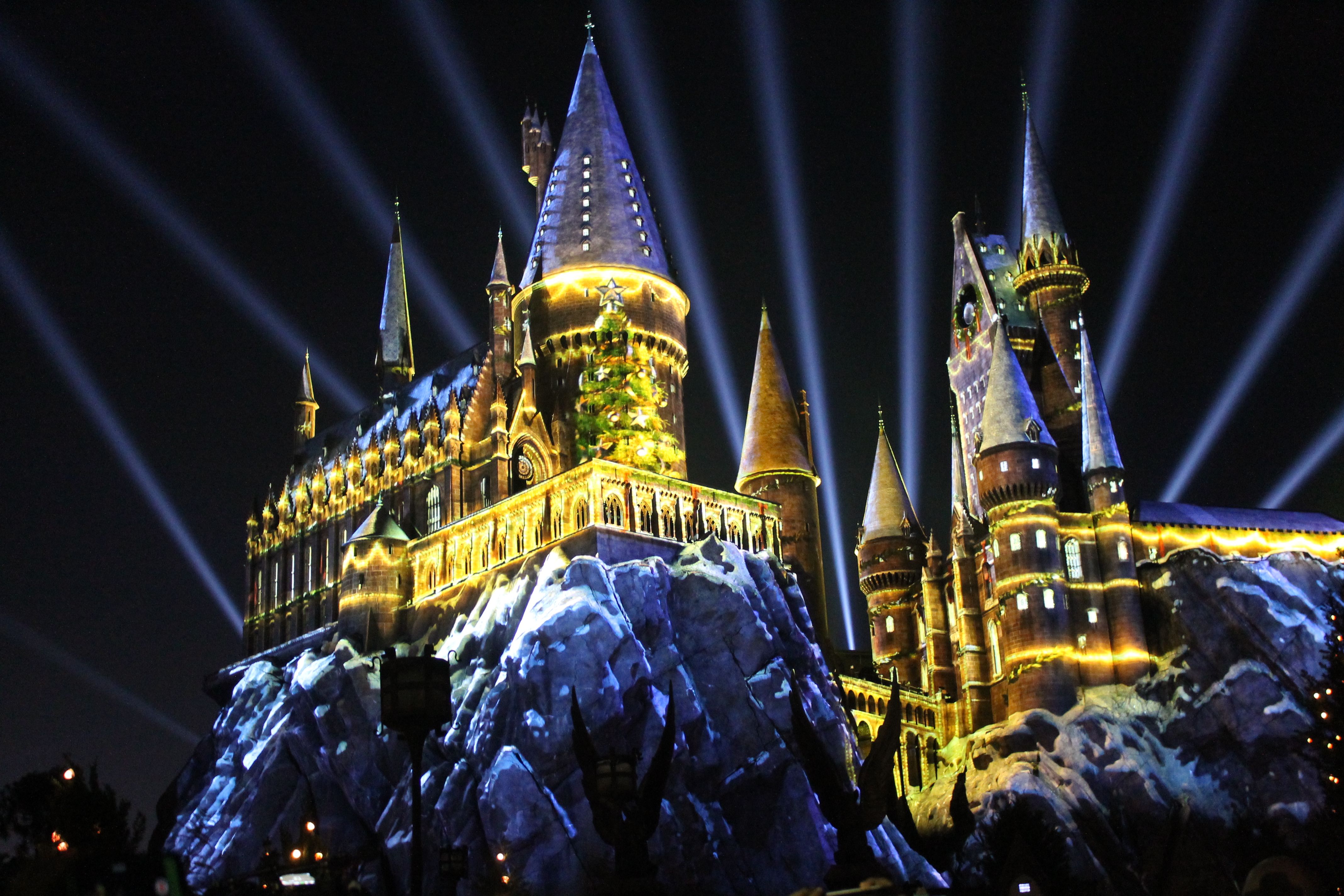 The best part is that the show will be repeated at regular intervals once it gets dark. The exact timing has yet to be established, but it is likely to be every 20 to 30 minutes, meaning that there will be plenty of opportunities to take in this visual wonderment

There is even special festive food, also themed to the Potter-verse, including a delicious hot Butterbeer that comes across like a smooth butterscotch and spice concoction and is ideal for the chilly evenings we are now having.

Universal’s Christmas festivities don’t end there, either. There is the now-traditional Grinchmas presentation in Seuss Landing in IoA, complete with the mischievous green mischief-maker himself. 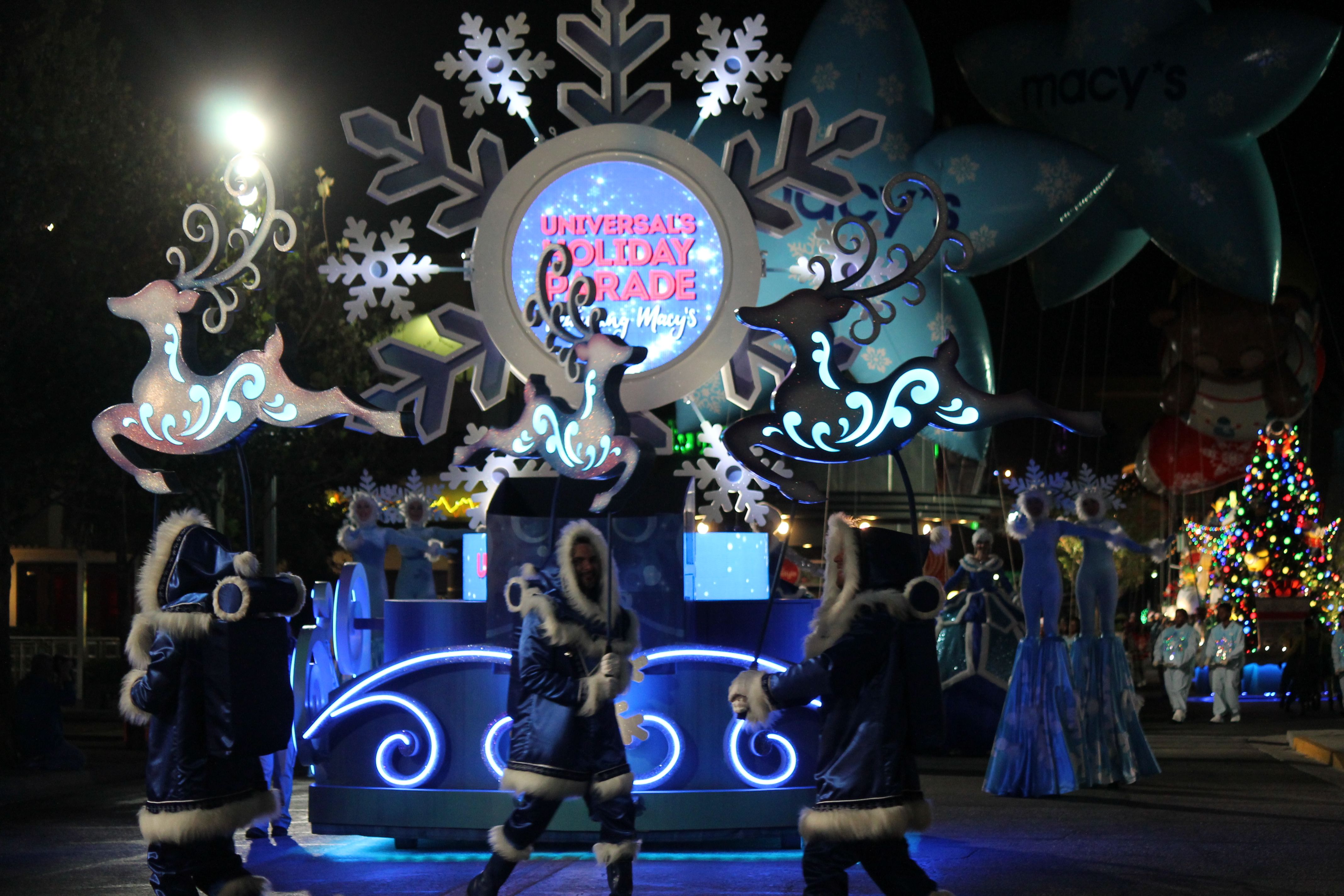 Then, back in Universal Studios, the main highlight is the completely revamped Universal’s Holiday Parade featuring Macy’s. In previous years, we’ve seen the traditional Macy’s Thanksgiving Day parade translated into a re-sized version for Universal Studios, but now the park and the parade creators have got together to produce an all-new version.

With a Christmas theme from start to finish, and incorporating a whole series of Universal and Dreamworks film characters – from Despicable Me, Madagascar and Shrek to Father Christmas himself – this huge performance features 15 totally original and intricately detailed floats and 16 larger-than-life balloons, all created specially for this parade.

It runs variously at 5.30 or 8pm each evening, and it provides another scintillating entertainment showcase for these fiendishly creative people, with more than 100 performers, dancers and balloon handlers. Even better, each set of characters and their float will make special guest appearances for meet-and-greets with visitors, several of them with their own choreographed shows to add even more fun to the occasion (look out in particular for King Julien from Madagascar!) 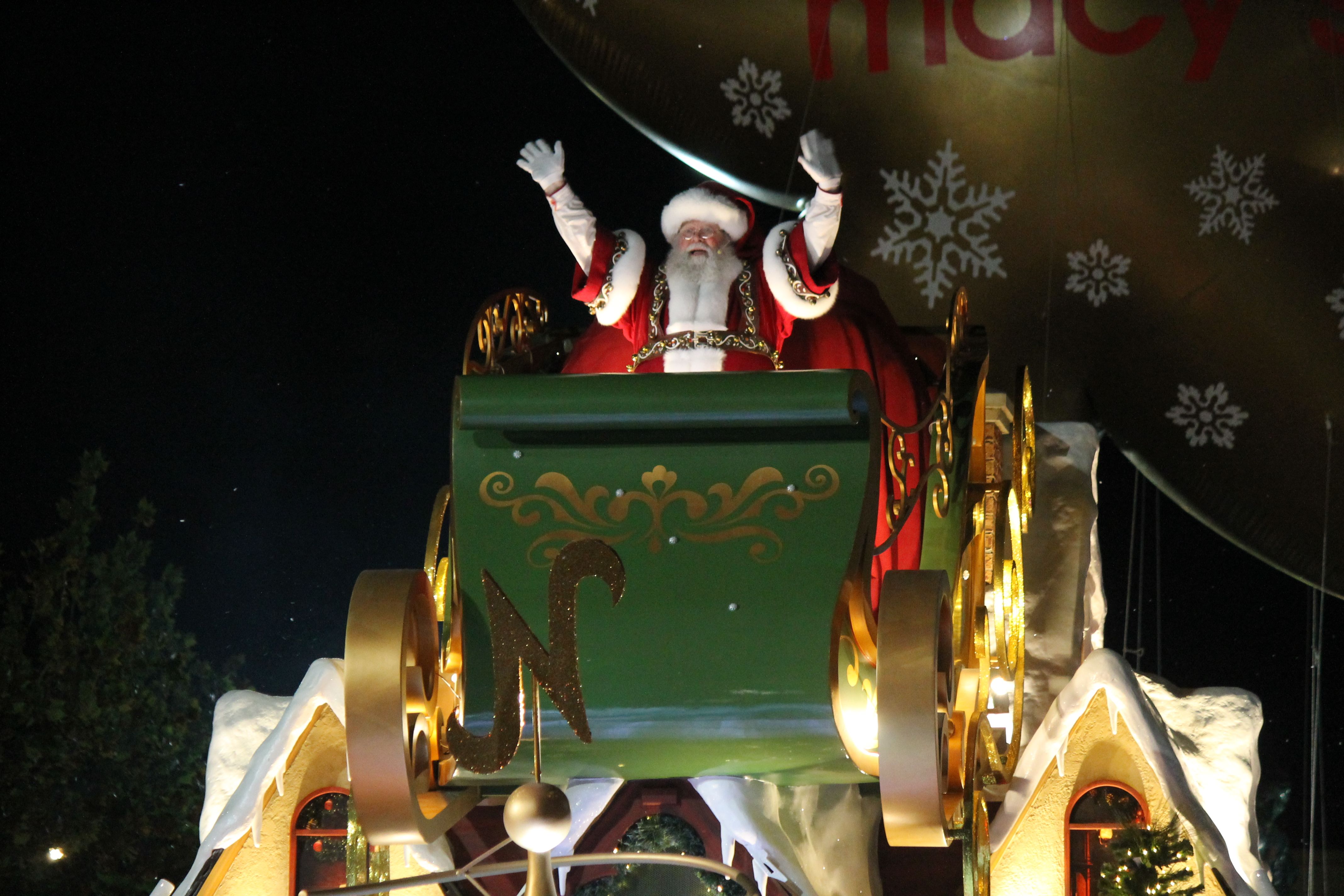 And then there’s the snow. The Parade is interspersed with several ticker-tape confetti moments, showering down from the upper levels of the surrounding buildings, and the grand finale sends cascades of snow into the mix, ensuring a suitably festive feel to the occasion.

There’s also snow coming down from the rafters during the Celestina Warbeck show, and more snow over Hogwarts (the digitally-projected kind) to go with the uber-cool snow scenery that’s already built in to Hogsmeade Village.

It all makes for the most stunning Christmas environment in Orlando this year – miss it at your peril!

Do you have questions about Universal Orlando or any of the other Orlando theme parks? Be sure to visit our forums at www.attractiontickets.com/forum/