Yes, it’s Halloween Horror Nights, Orlando’s premier seasonal celebration of the horrific and macabre, and this year sees a record ten Haunted Houses in the eye-popping line-up of the grim and ghoulish.

Of course, there are also five outdoor Scare Zones to negotiate, and the absolute don’t-miss live entertainment of high-energy dance group Academy of Villains, who this year thrill guests with a high-jumpin’, tub-thumpin’, bass-pumpin’ Cyberpunk-themed show in an all-new arena built especially for them. 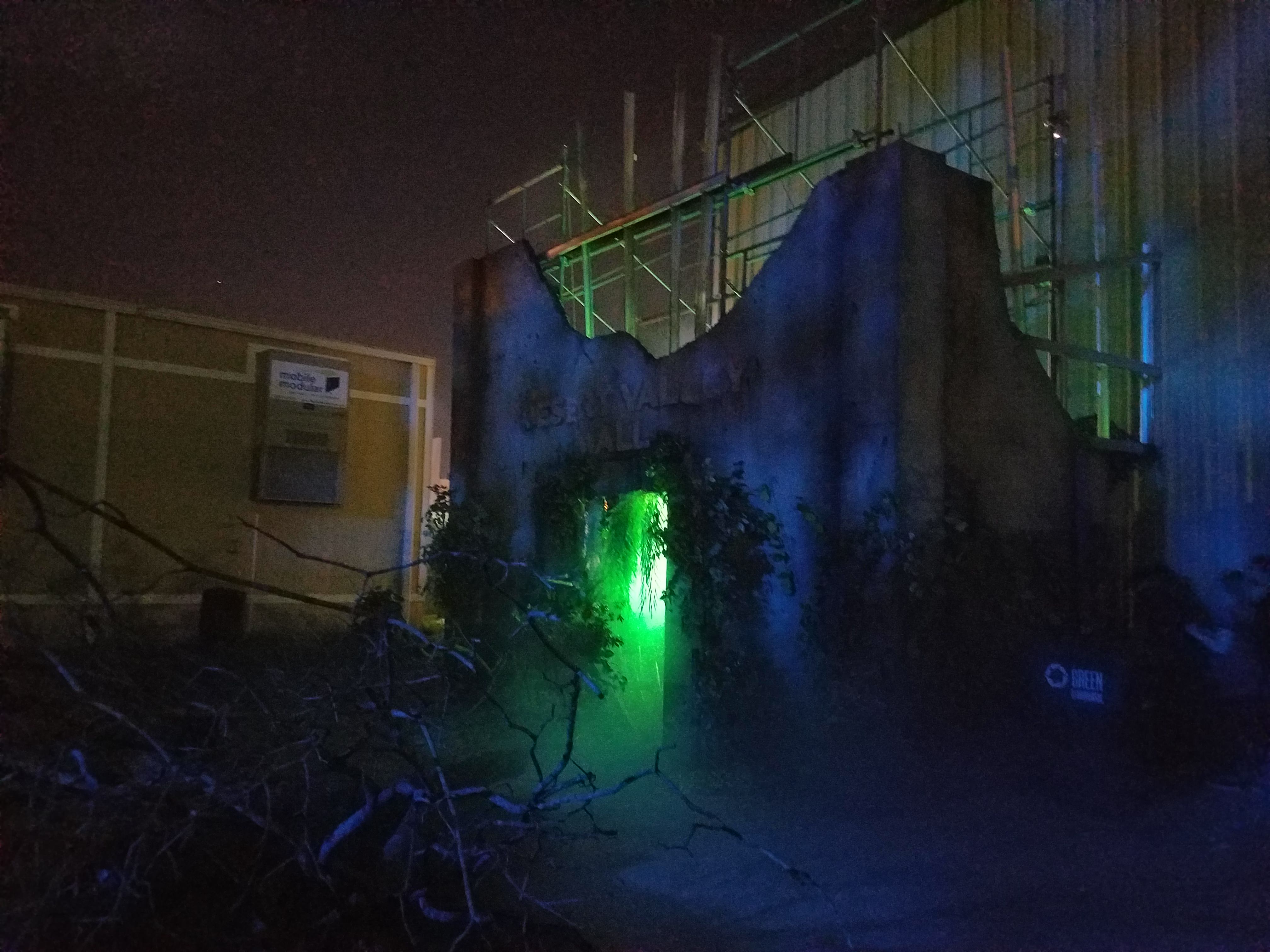 But you want to know about the Houses, right? You’re desperate to know just HOW fiendish and foul they are, HOW many ways Universal’s wickedly creative folks have found to scare us out of our underwear, and HOW out-and-out monstrously malevolent it all is, correct?

In short, you want to know how much outrageous, blood-curdling fun you’ll have. Are we right?

Well, sit back and get a firm white-knuckle grip on your PC, laptop or hand-held device as we bring you the full, unexpurgated fear and nightmares of – Halloween Horror Nights 2018….*cue demonic laughter…* 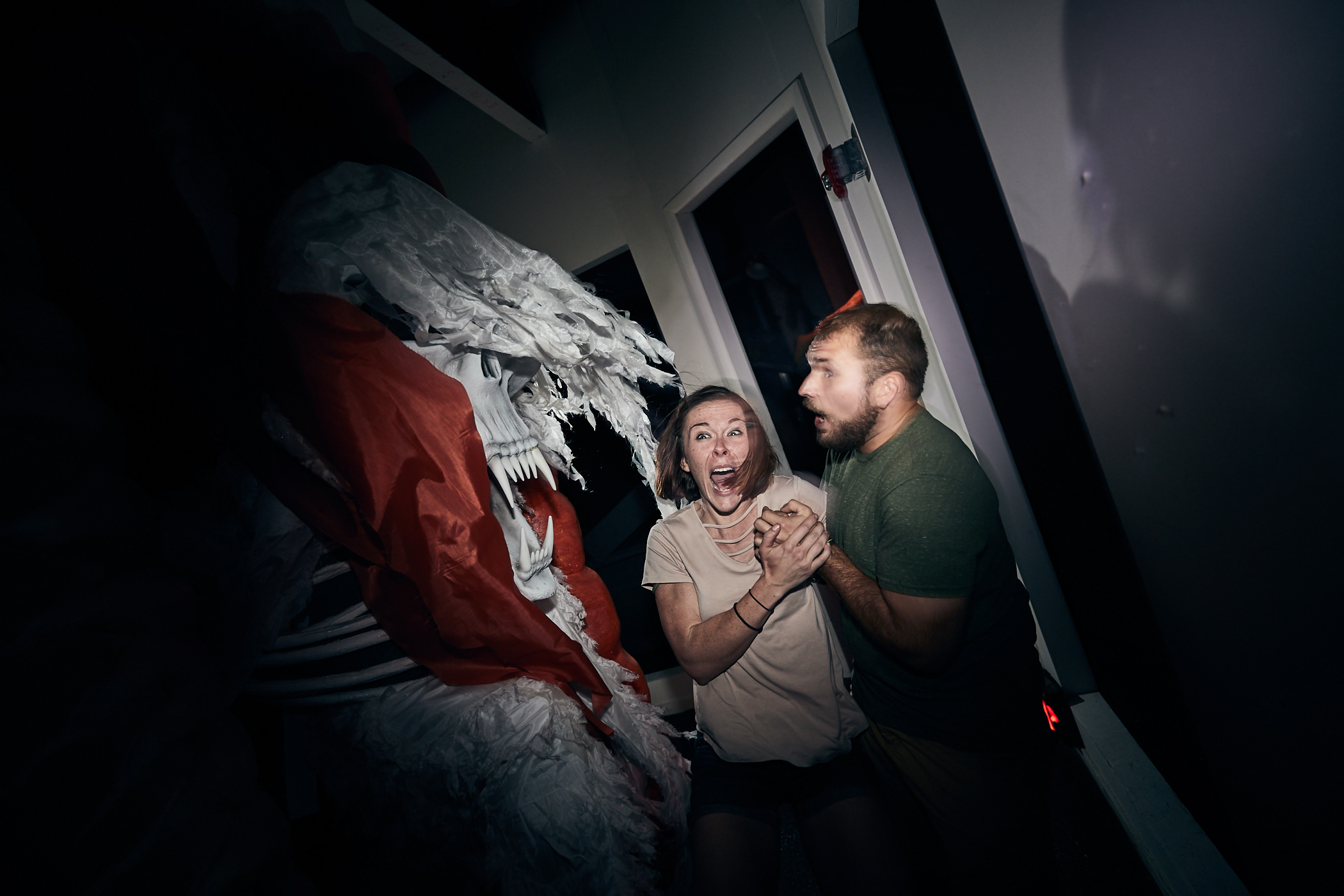 This big-name Haunted House is a full-on homage to one of the classic horror movies of the 1980s. The original had us all scared to turn on the TV after that initial haunting exclamation of “They’re here!” and Universal play on that recurring theme for all they’re worth, ensuring plenty of jump-out-of-your-pants moments. The exterior of the house, complete with a light rain falling, sets the scene for the evils that lie within, and fans of the film will not be disappointed. This also has one of the creepiest sections to navigate, with some truly disorientating effects. Wonderful! 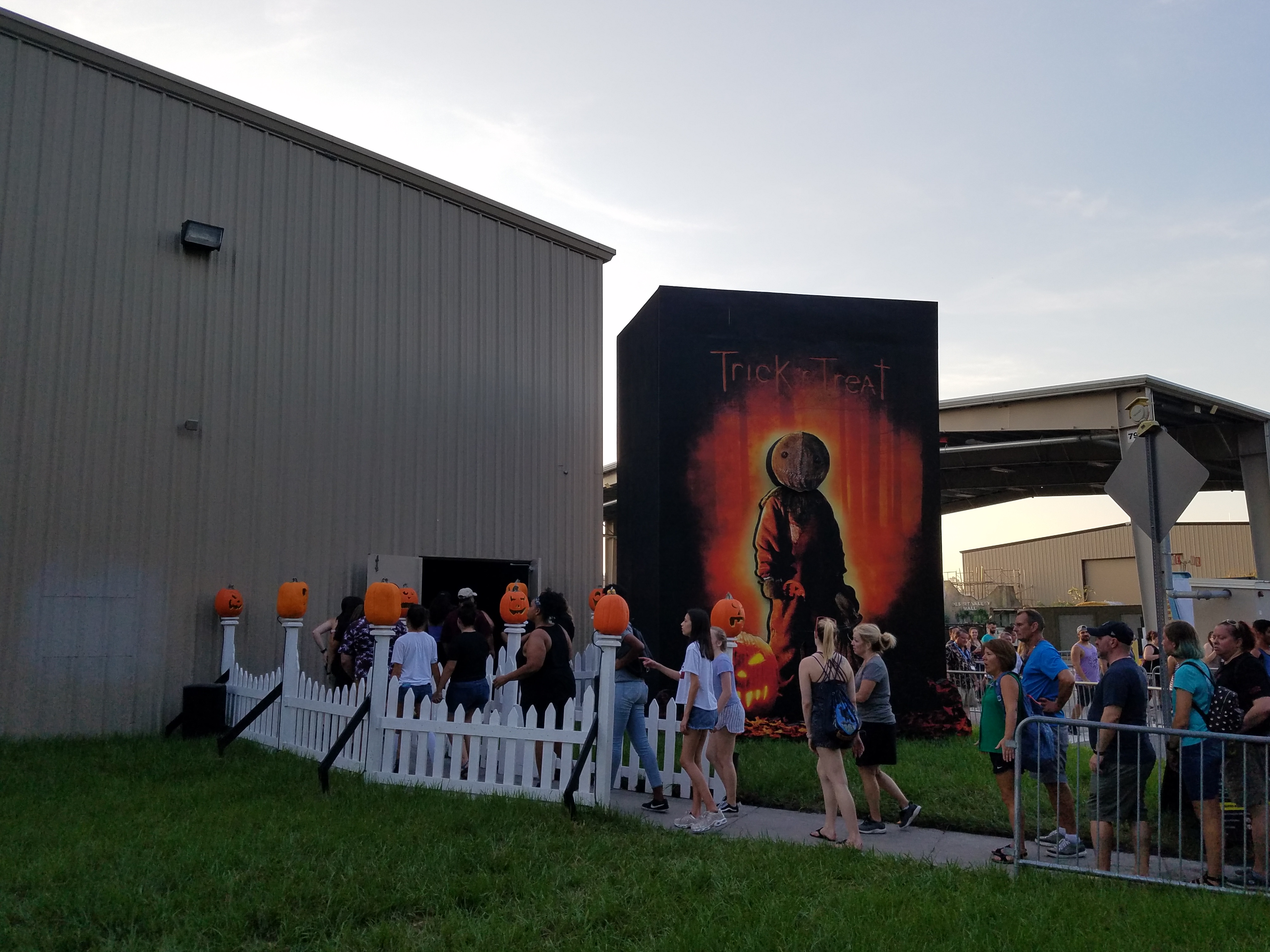 This 2007 horror film made its debut at HHN last year and is back for another hideous romp through the five different stories of Trick or Treating gone horribly wrong. The lurking dread of Sam the Pumpkin Man – whose Halloween Rules must be obeyed – is a constant threat as you wander the disjointed hallways, and the screams, wails and howls of unknown things in the dark add to the air of menace. It helps to know the film for this one, but the general sense of evil is unmistakable. 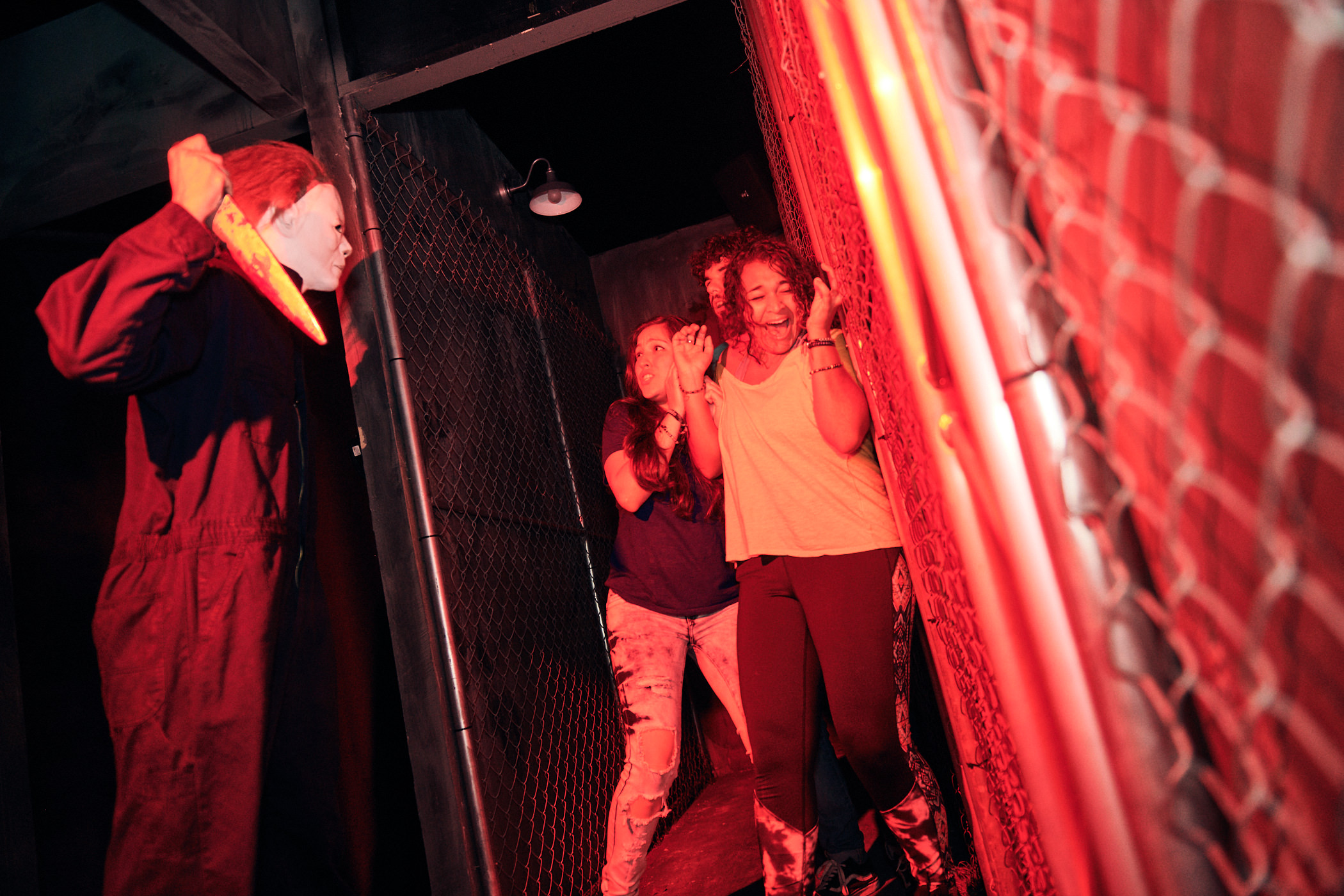 Halloween 4: The Return of Michael Myers

The fourth of the massively successful Halloween movies was an absolute bloodbath as the masked killer returned to wreak havoc on Haddonfield once more, and this Haunted House goes full-throttle to replicate that gruesome scenario. The familiar madman-in-the-mask makes plenty of appearances and there are some delightfully gory touches, but this is one where, perhaps, too MUCH Myers is not the best use of this crazed asylum setting. 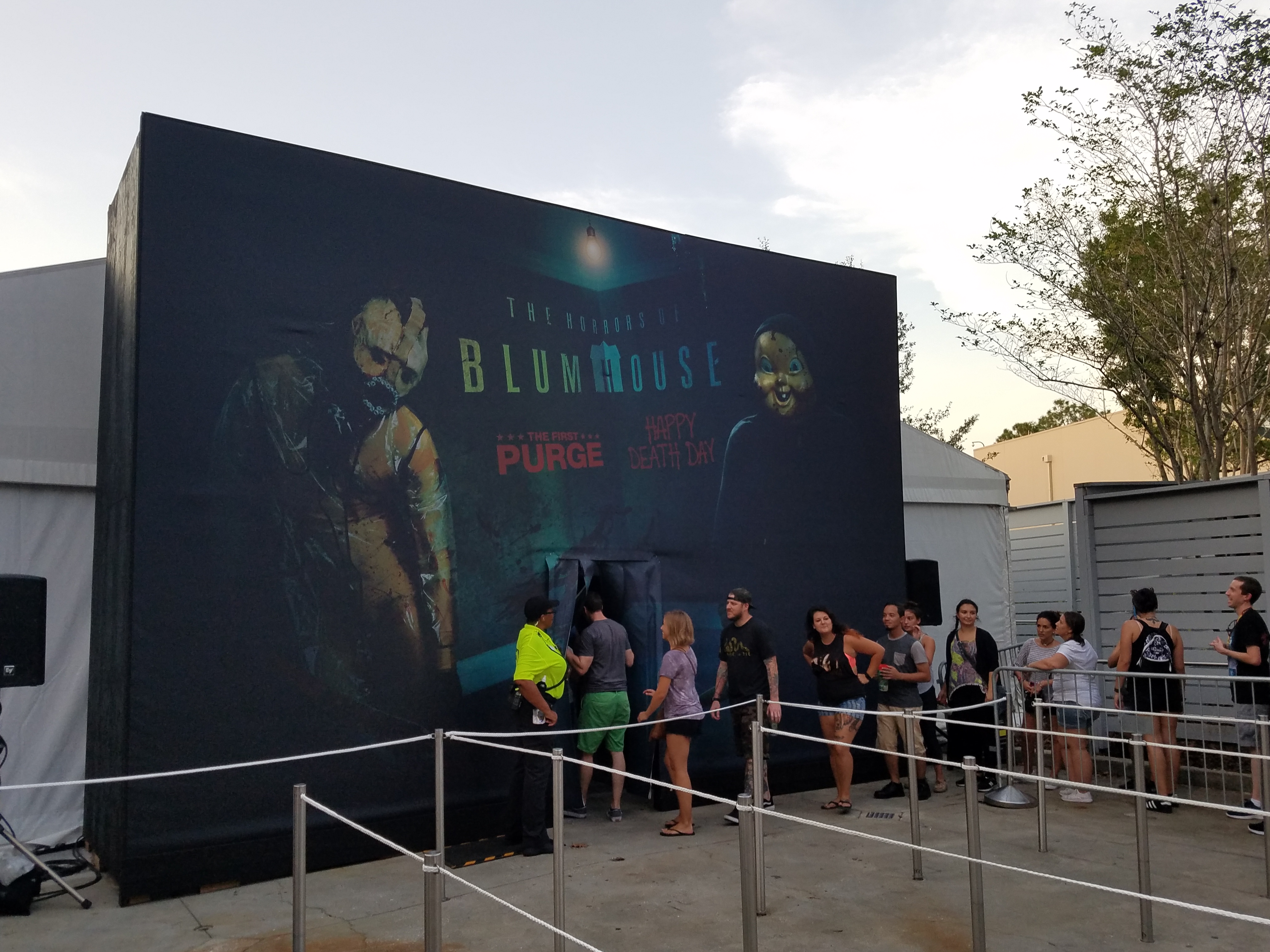 The Horrors of Blumhouse

The shock-horror movie makers that brought you Truth or Dare and Insidious have collaborated with Universal for a second year, bringing to life – or, more properly, death – two of their most horrific stories, First Purge and Happy Death Day. The latter is just a bit too repetitive for maximum effect (albeit, that is the film’s basic premise) but the all-out murderous mayhem of the former fits the HHN genre perfectly, and will ring in your ears long after you exit. 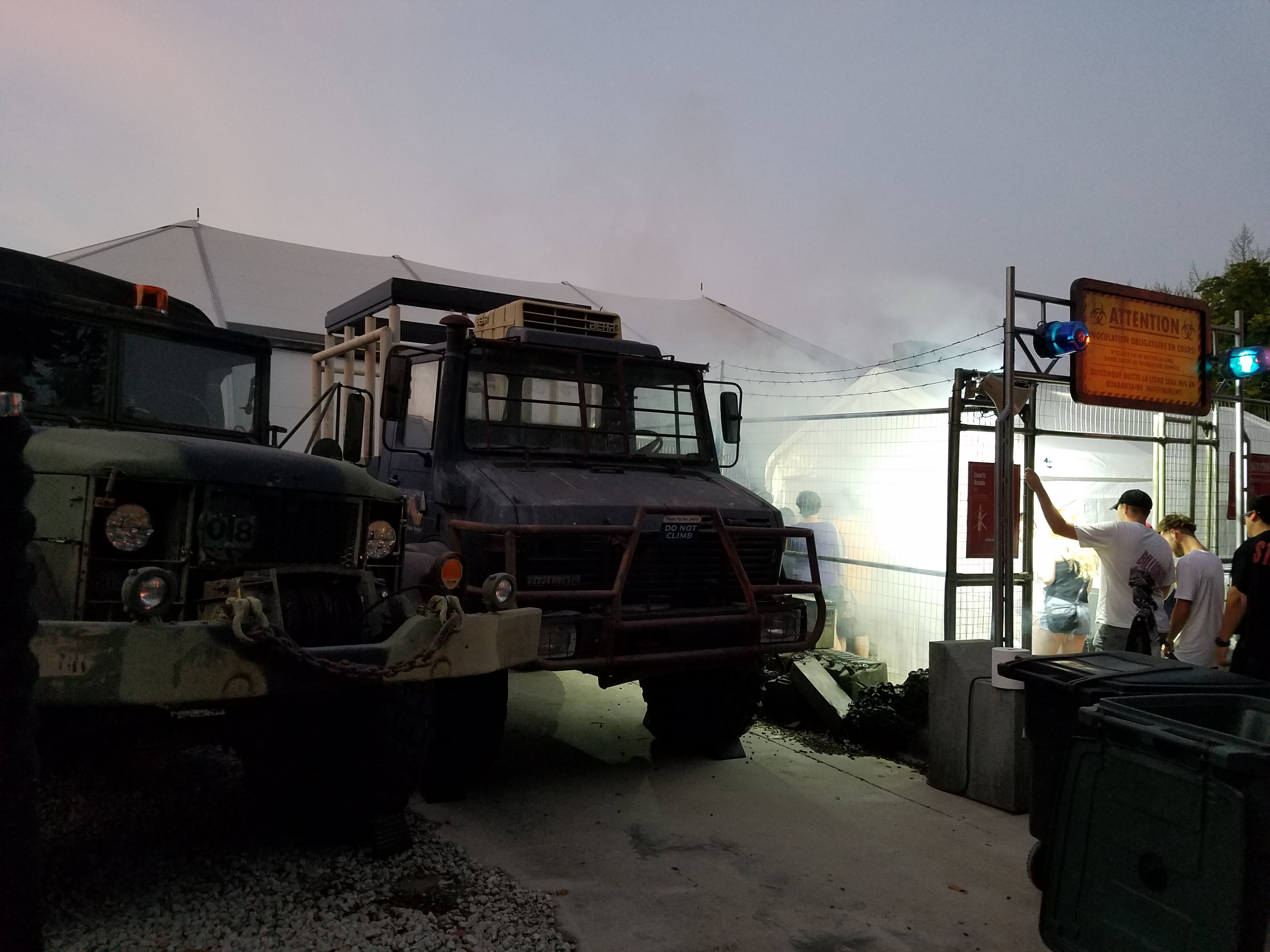 It’s Zombie Time! After all the typical horror themes, Universal has gone back to the flesh-seeking zombie genre to re-work one of its own classics. Dead Exposure debuted at HHN in 2008 and is reborn as a ‘prequel’ this year, dropping guests into the horror of Paris at the beginning of its zombie infestation. It’s dark – as in pitch black – and those flesh-eaters are seeking YOU in the murk. The scene-setting is superb, in a scientific institute where things have taken a turn for the disastrous, and the sounds of screeching monkeys echo through the halls as the evil dead roam freely, while strobe lighting keeps you continually off balance. 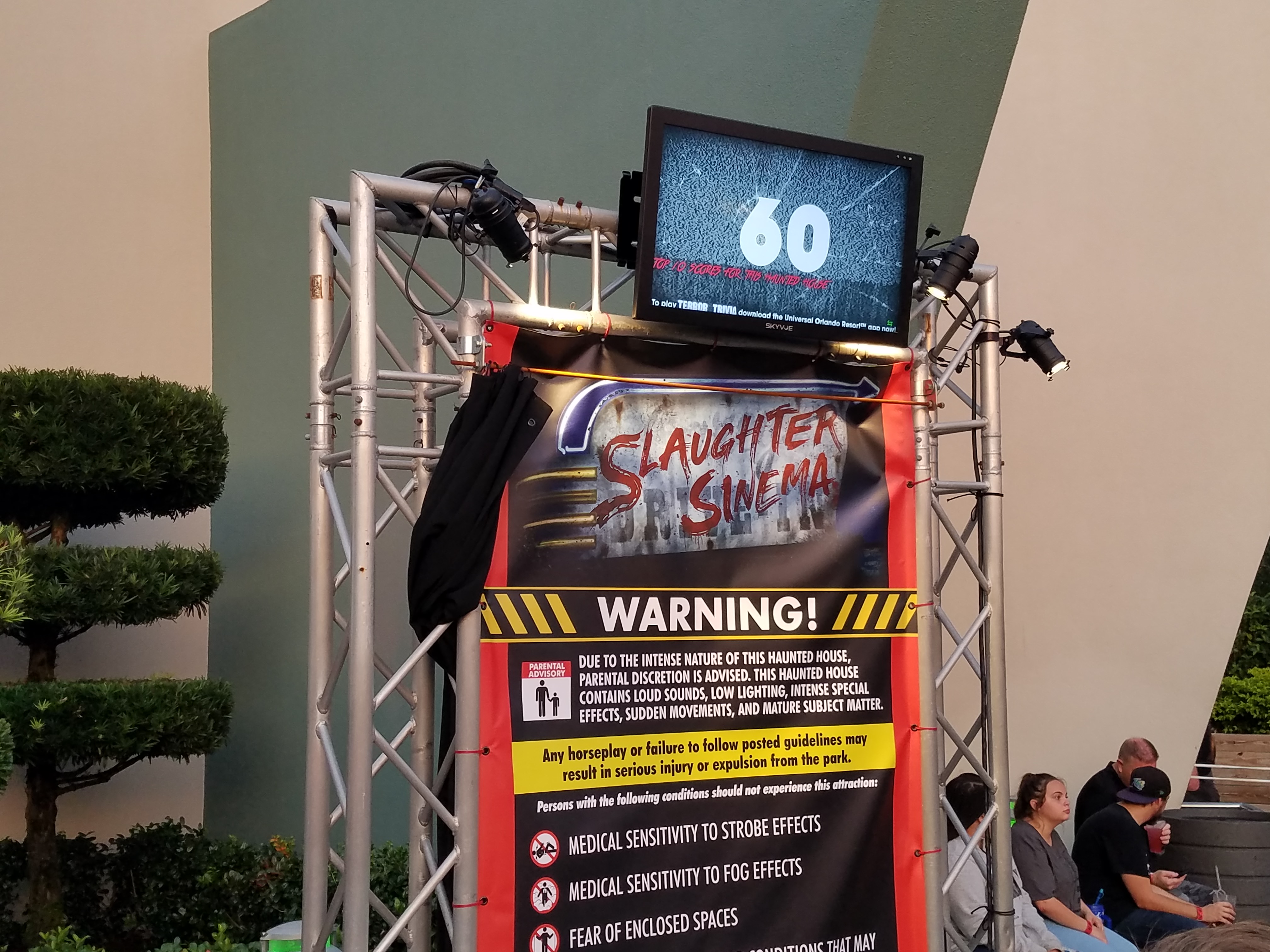 After all the horror film franchises, here is the first of a series of original Houses from the warped, depraved – and utterly brilliant – minds of Universal’s HHN creative team, who love nothing better than dreaming up new ways to torment their guests. The local drive-in cinema has been taken over by malevolent forces, and that’s the cue for visitors to be terrorised by a series of werewolf bikers, evil pumpkin men, deadly barbers and alien cannibals. Blood-thirsty? You bet. Fun? Absolutely! There is a LOT packed in here, with plenty of twisted humour to go with it, and you never know what deranged beast will jump out at you next. The giant creature at the end, though? Watch out! 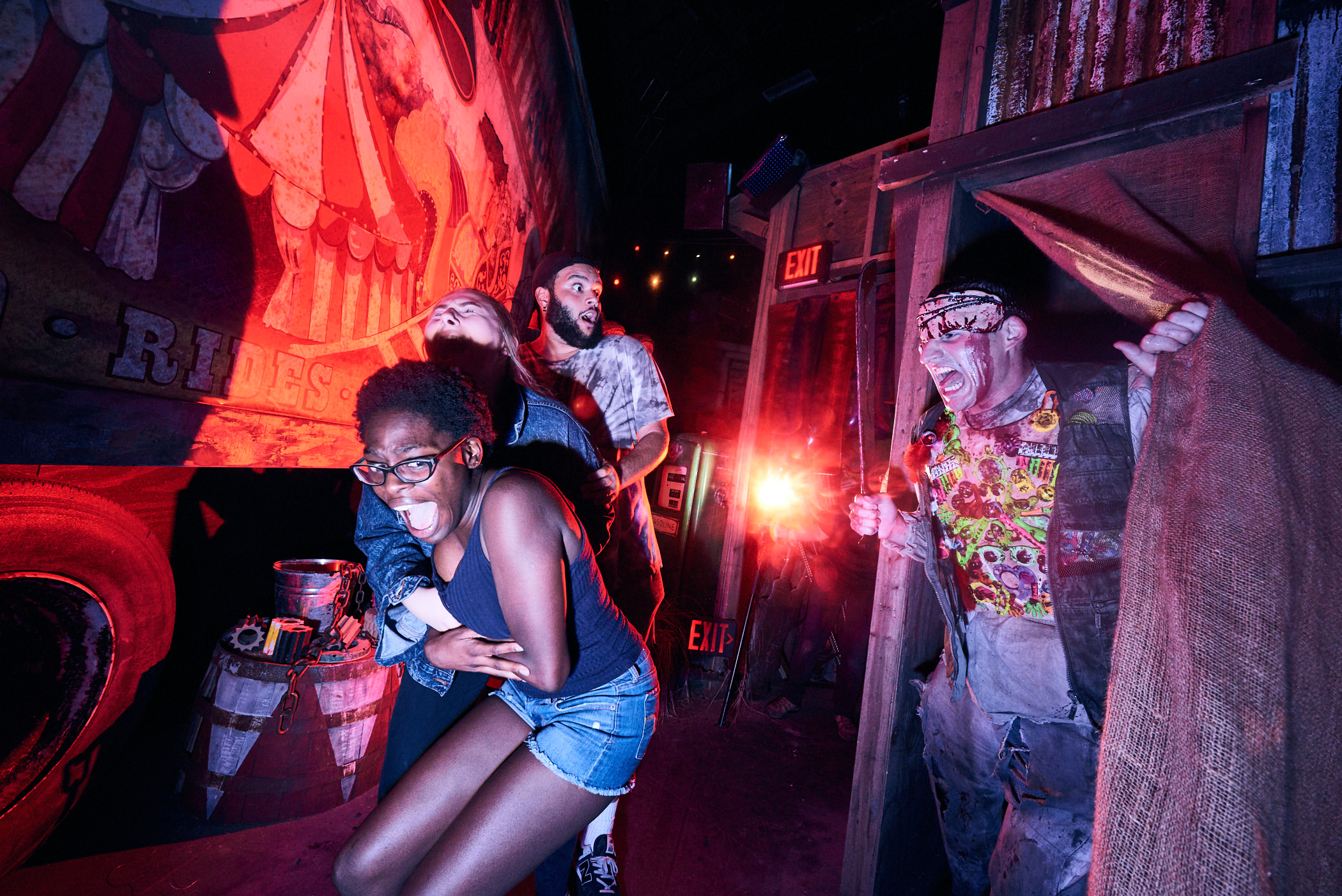 Enter a dilapidated, rusty old amusement park – and try to survive the lurking menace of the evil carnival characters that inhabit its broken-down confines. This is another original House and a chance for Universal’s designers to get seriously creative with the visual elements and props, and that they certainly do. The level of detail is possibly some of the best, and the additional dynamic dimension of scare-actors on bungee cords above you, throwing large-scale props around with resounding clangs, is as alarming as it sounds! 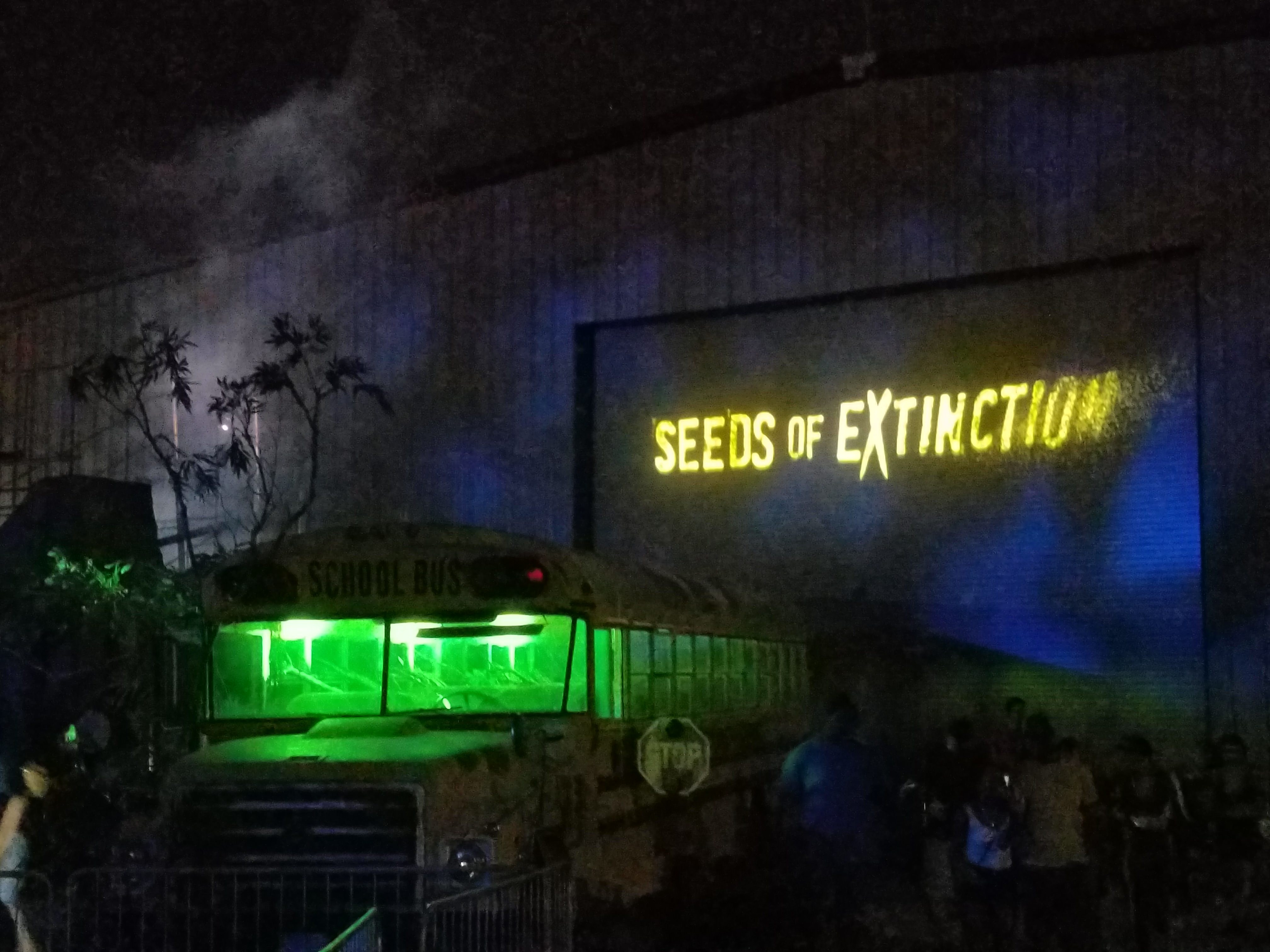 Ready for another all-original storyline and setting? This is a throwback to the classic horror sci-fi of John ‘Day of the Triffids’ Wyndham, in a post-apocalyptic world where invasive, killer vegetation is keen to wipe out the human race. The whole premise is utterly chilling and the change of pace from obvious terrors to a nightmarish range of deadly plant-like life-forms, with all kinds of fangs and other weapons of mass annihilation, is superbly enacted. 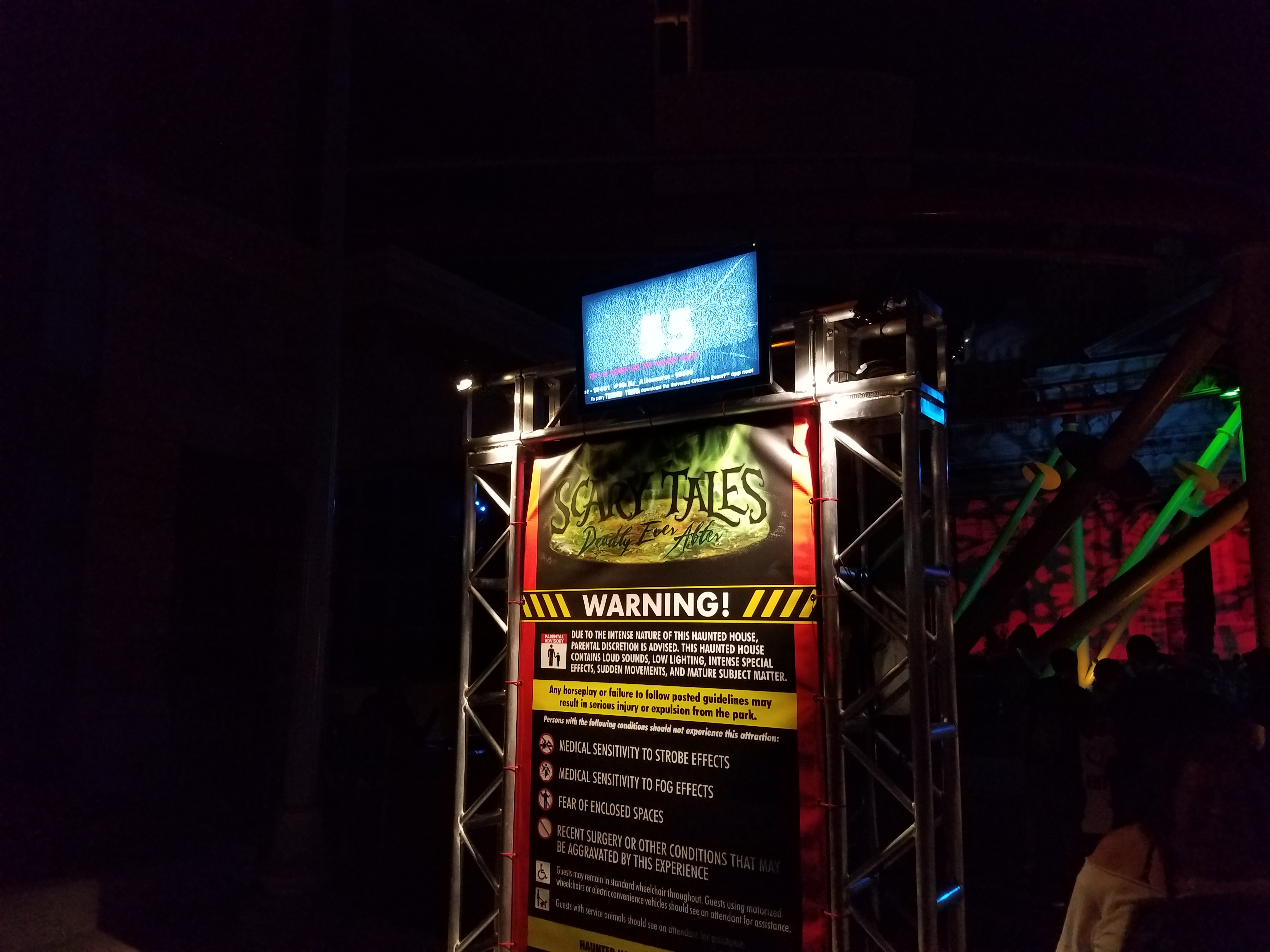 Here’s another new House from the fevered minds of Universal Creative, taking traditional fairytales and giving them a truly evil twist. Meet the wickedest witch of all, who has cast a demented spell on various storybook characters, turning them into horror oddities. The large-scale opening scene with the manic witch is enough to give you chills on its own, and that is just the forerunner to an extensive maze where all your preconceptions of fairytales are almost literally ripped apart. A+ for imagination, A++ for effect! 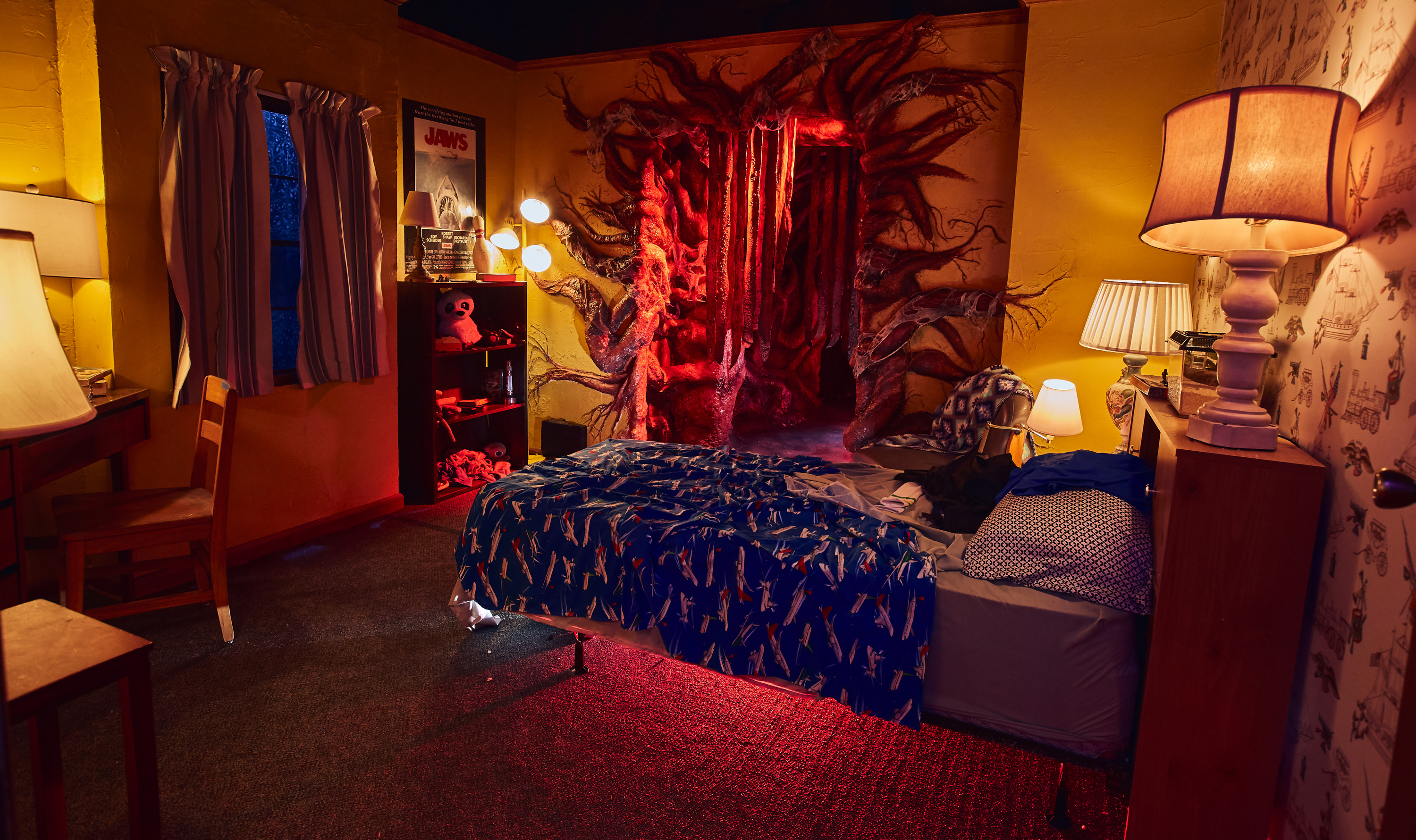 Saving this year’s biggest headline attraction for last, the massively popular TV series has collaborated with Universal to present the full, deadly story of the first series as guests venture into The Upside Down for a face-to-face meeting with the Demogorgon. You’ll find the longest queue for this House, and it’s easy to see why as the attention to detail is off the scale. The ultra-realistic world of Hawkins National Laboratory – and the evil dimension it has uncovered – is brilliantly vivid, and totally credible. And the wild chaos that ensues is heart-poundingly intense.

So, that’s the full run-down of all the horrors on offer at this year’s bigger-than-ever Halloween event at Universal Orlando. The only question is – are you brave enough to give it a try? “Well, punk, are ya?”

PS: With the extra Houses this year come extra crowds. Best days to visit are Wednesday or Thursday – or get the Universal Express pass, which could save you hours on busy nights.

Want to know more about Halloween Horror Nights or any other aspect of Universal Orlando? Come and ask your questions – or tell us your experiences – on the ATD forums! Or, if you don't have your tickets yet, click here to book now.