A Sneak Peek At Hagrid’s Coaster!

Universal Orlando Resort Tickets , Orlando , New Attractions
By ATD’s Florida Experts, Susan and Simon Veness
The excitement has been building for months, but Universal Orlando has decided to take our anticipation straight to 11. And we’re here to tell you Hagrid’s Magical Creatures Motorbike Adventure will be well worthwhile!

So, we’ve known about this fab new ride at the Islands of Adventure park for more than a year. The former Dragon Challenge coaster was shut down in September 2017 and the extensive construction began in earnest in early 2018. The scale immediately looked huge, and we were agog for news of what the finished article would actually be.

It was pretty clear it was going to be something on an epic scale; it was also hinted that this new attraction would feature Rubeus Hagrid in great detail; and we could see from early aerial photos that this would be nothing like any existing rides in the Florida firmament.

In February, Universal finally announced the name of the new ride and, a few weeks later, a LOT of detail, including all the ‘Magical Creatures’ we could expect to see. Our Excitement-ometer ticked towards ‘10.’ 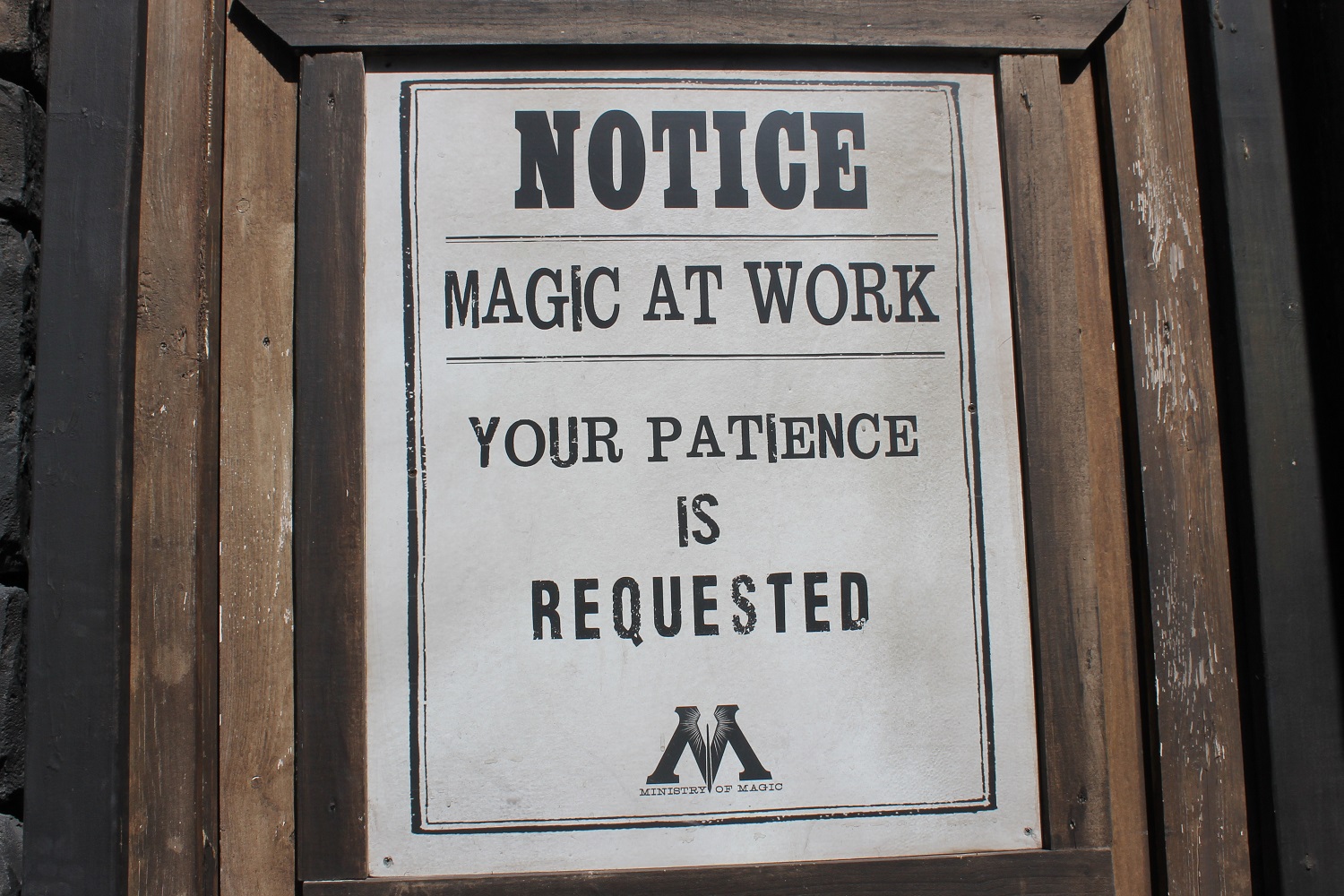 And then they let us know they had a little extra something up their sleeve. Would we be interested in a ‘sneak peek’ at the attraction prior to its opening on June 13? We wouldn’t be able to actually get on the ride, but Universal’s creative folks would walk us through the queueing area, talk about a lot of the detail, and show us what it will look like in action.

Quicker than you can say ‘Expecto Patronum,’ we were signed up for our secret assignment and sworn to secrecy until 11am today (May 20). And now we can let the cat out of the bag – this is going to be a stunning ride, and it’s not just for coaster aficionados. 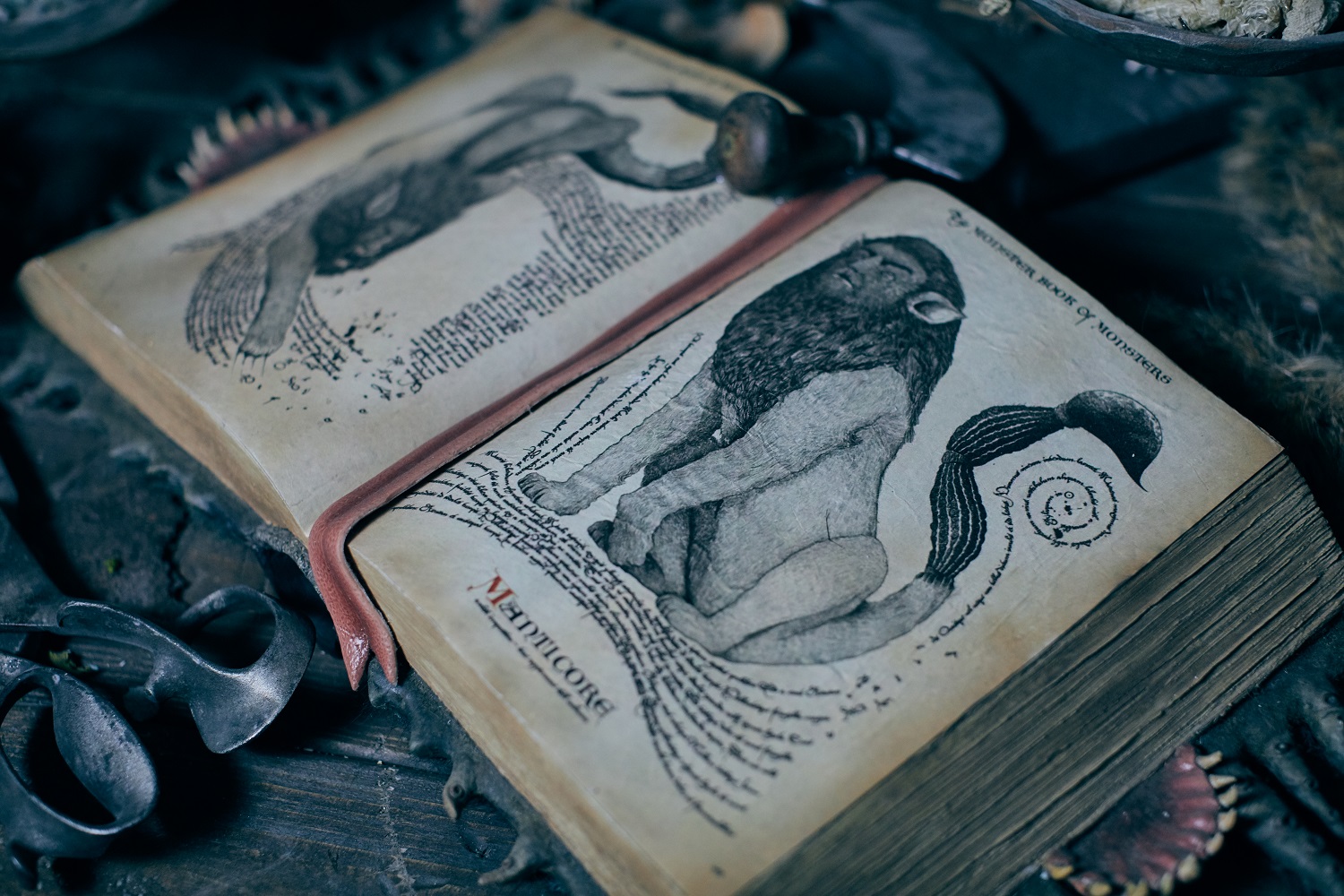 The queue alone is a work of art and easily the equal of the two other mega-attractions in Universal’s two Wizarding Worlds, Harry Potter & the Forbidden Journey and Harry Potter and the Escape From Gringotts ride.

Just to start with, Universal are calling it ‘The world’s first story-telling coaster,’ as there is a genuine immersive story all the way round. It begins in the remnants of the Castle adjacent to Hagrid’s Hut, and it moves riders along swiftly and smoothly into different scenes involving Hagrid, some of his creatures – and some of the more dangerous elements of the Potter-verse. 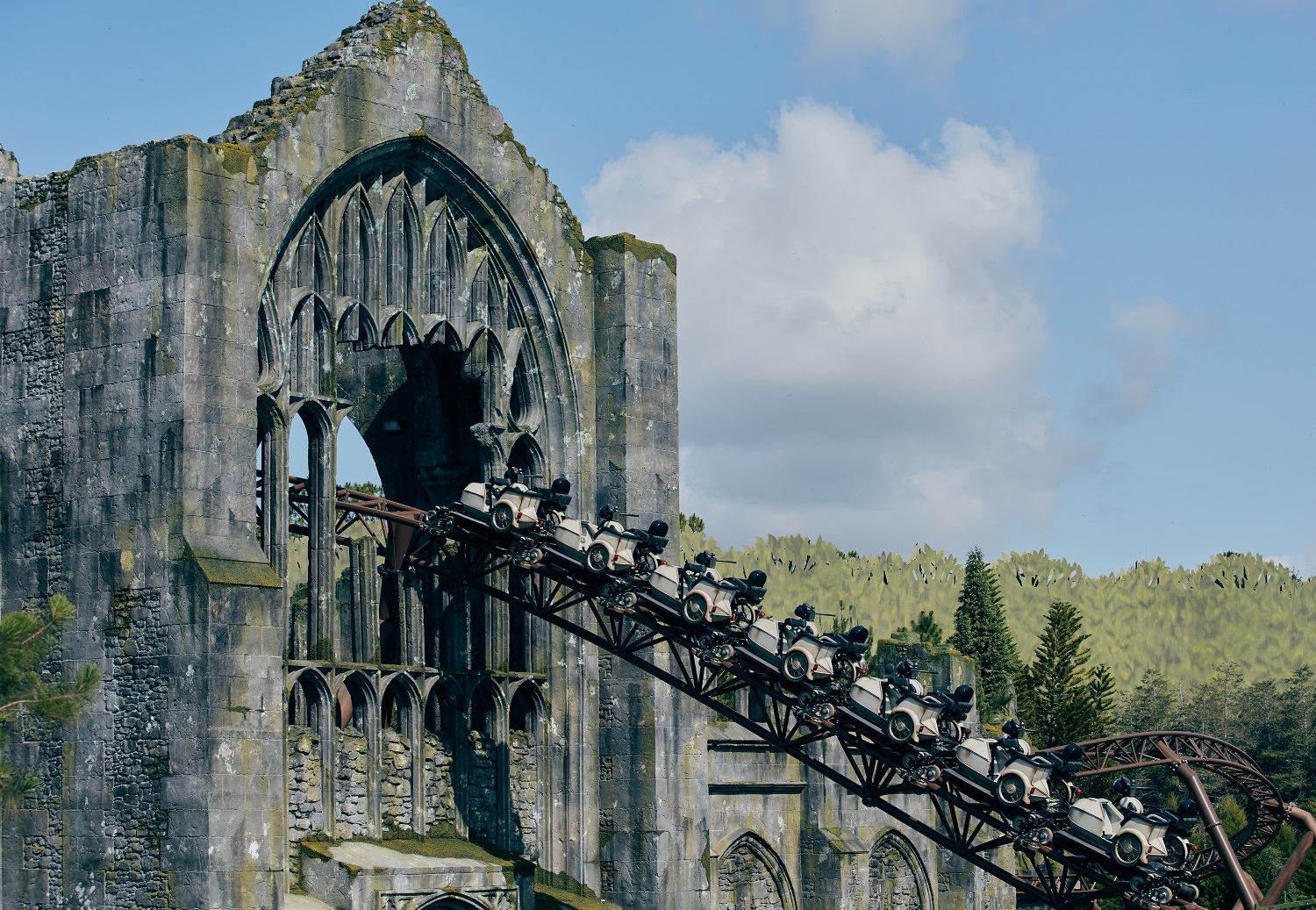 Our initial look at the ride – as we were conducted behind the construction hoardings by Universal’s PR team – was nothing short of breathtaking. The whole area of Dragon Challenge, and a little more besides, has been completely removed and rebuilt in an entirely novel way. Now, instead of just seeing two coaster tracks intertwined with each other, you see a more organic-looking track weaving its way through elements of the Forbidden Forest, disappearing at different stages into mysterious buildings and swooping over, around and through various castle-like ruins. 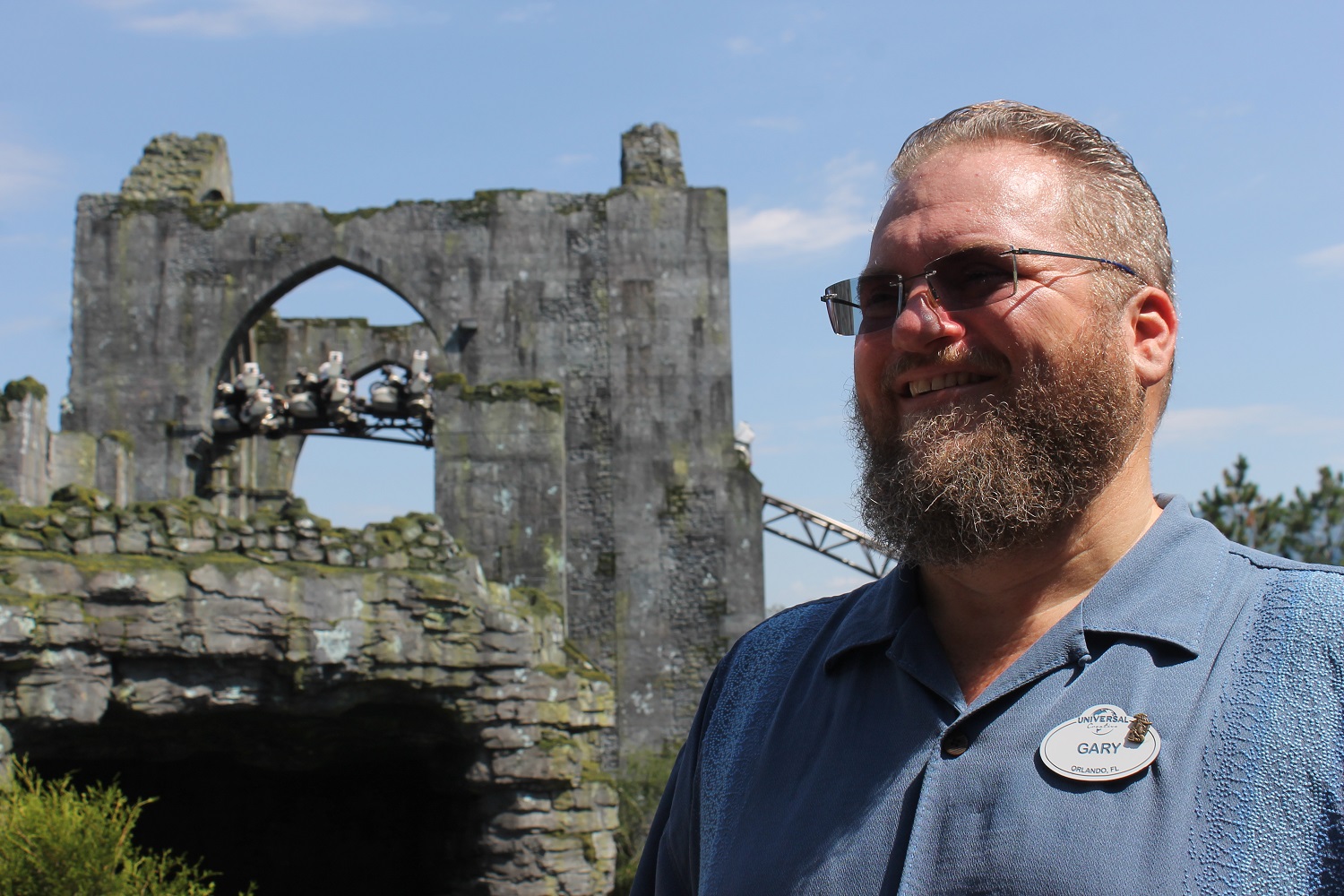 Gary Blumenstein, the Creative Director for Universal Creative, explained the thinking behind the attraction. “This is a whole new ride experience for us, a perfect way to add to the Harry Potter story. We worked closely with Warner Bros film team to create an extension to the Hogwarts experience, and we thought it was a great opportunity to tell guests more about Hagrid, who is such a beloved character.

“It is 6.6 acres of land that have been completely reimagined. We have planted over 1,200 trees and, as guests [in the queue] look out over this vista, they will see motorbikes flying by on their way into the Forbidden Forest. It makes for a very dynamic look.” Show Producer Elaine Hinds added, “The ride is dynamically different in that you have the sidecar as well as the motor-cycle, and the experience between the two seats will be very different. We think all the kids will want to ride in the sidecar like Harry Potter, but people will have a great time revisiting the ride and experiencing it in both seats.”

The set-up for the ride through the queuing area is totally delicious. The ruined castle has become Hagrid’s private preserve for raising and preserving his ‘magical creatures’ (including dragons and the unique blast-ended skrewts!). Visitors are here for his Care of Magical Creatures class and meet both Hagrid and Arthur Weasley in a special chamber to set up what’s in store. The queue winds through several more chambers and brooding corridors before you arrive in another chamber that is more reminiscent of a medieval scientist’s lair and, is, in fact, where the blast-ended skrewts were created. 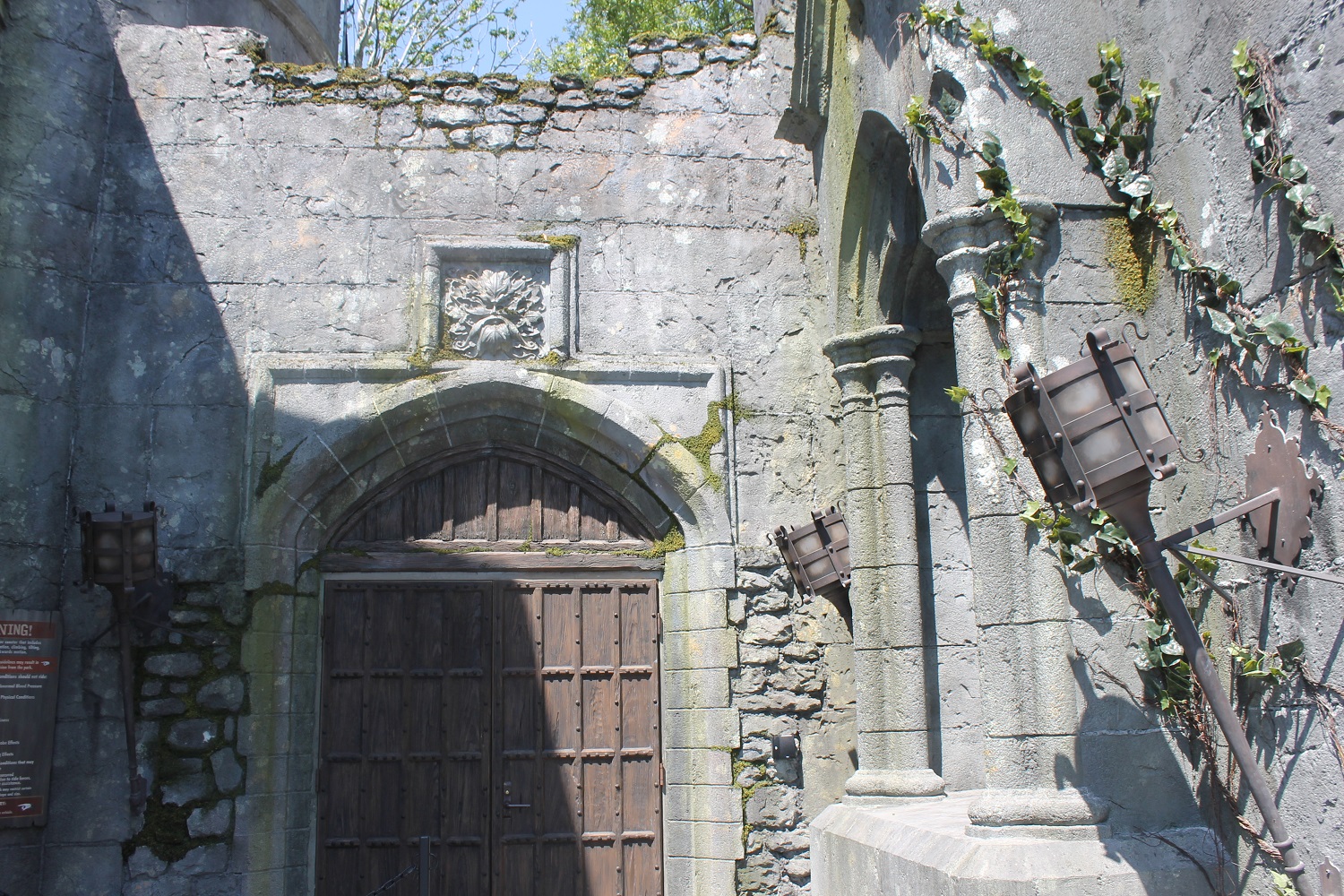 Details include the vegetables growing in Hagrid’s back garden (runner beans and pumpkins, from the books) and gnome footprints and gnome-holes along the path, with accompanying gnome voices just out of sight.

It is that kind of elaboration and detail that will make this ride come alive, along with the technological wizardry that will thrill coaster fans without scaring off those who are usually too timid to give them a try. 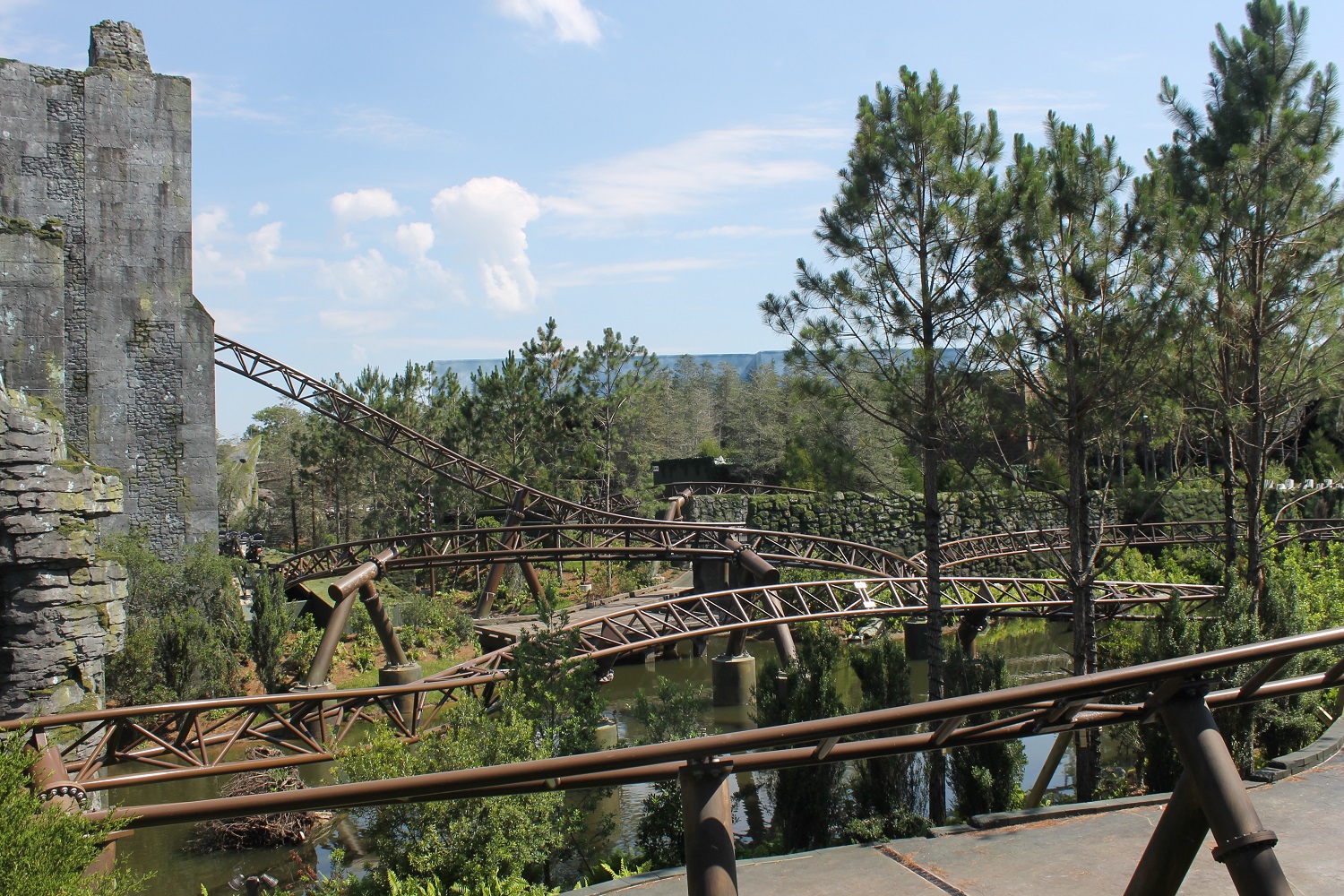 The ride will reach a top speed of only 50mph, slow by the standards of rides like the Hulk Coaster and SeaWord’s Mako, but still “deceptively fast” according to Hinds. There won’t be any big hills or large drops, but there WILL be some tight twists and turns, a world-record SEVEN fast-launch points and a 17ft freefall vertical drop for the whole coaster train.

The highest point in the ride will be only 65ft above the ground, but it will come with a fast-launch up to the peak, and then an equally quick return – backwards – into another element of the ride. It will also be by far the longest coaster in Florida at a massive 5,053ft, or just 76 yards short of a full mile. By comparison, Busch Gardens’ thrilling – and long – Cheetah Hunt is 4,400ft. 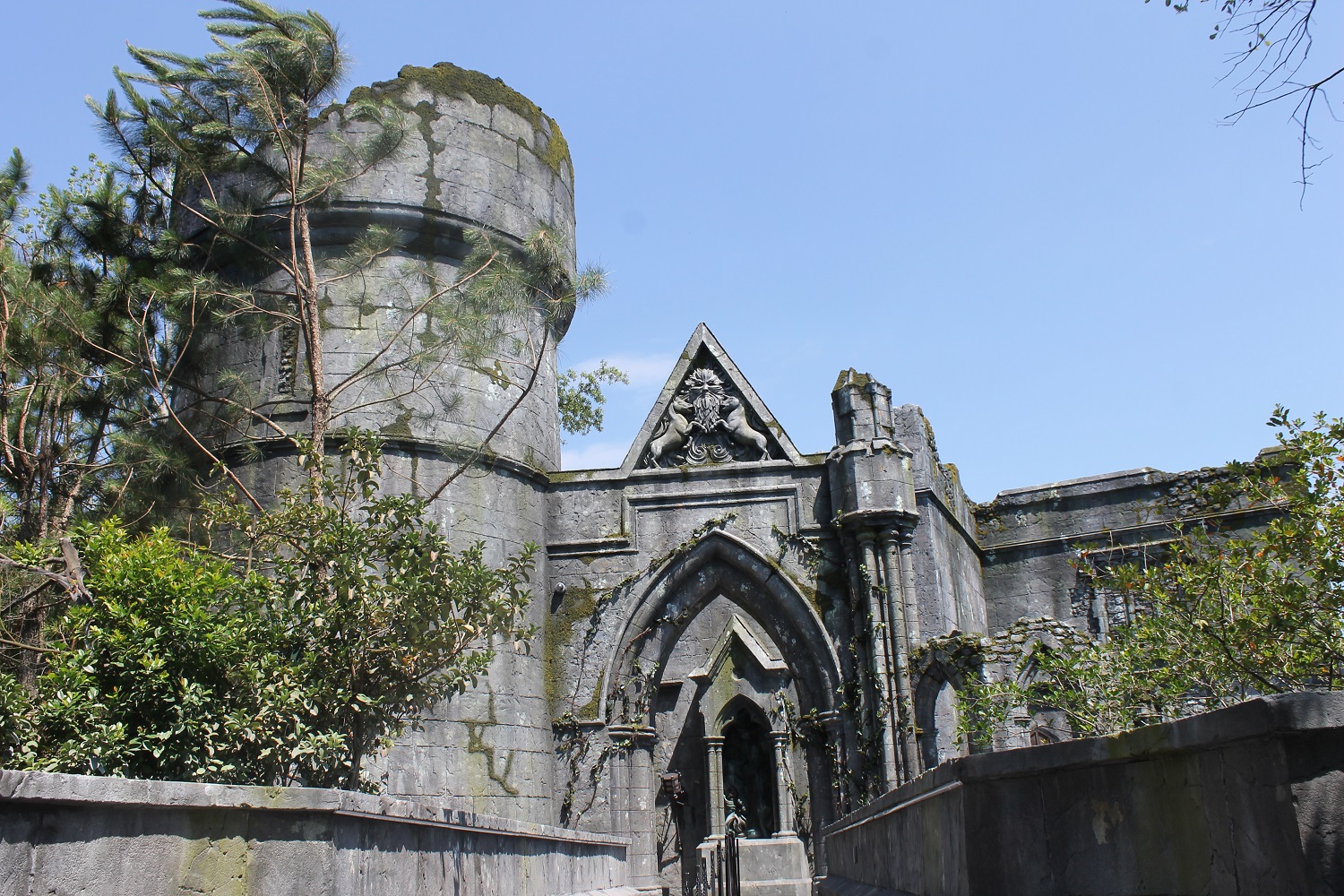 Our final perspective on the new attraction (opening June 13, in case we haven’t mentioned it before!) is that this will be something wonderfully entertaining all-round. From the moment you enter the queue to the moment you return to the solid ground of Hogsmeade, this will be a unique and exciting experience.

Just as importantly, it will add to the Harry Potter story (based roughly around Book 4, Harry Potter & The Goblet of Fire) and immerse visitors even more deeply into this incredibly creative realm, thanks to the collaboration with the films’ Production Designer, Stuart Craig, and Art Director, Alan Gilmore.

We’ve been big fans of the Wizarding Worlds since they opened in 2010. Now, 2019 will mark yet another opportunity to wallow in this truly magical theme park wonderland – and all its magical creatures!

Check out the video below for a preview of this incredible new ride:

Want to know more Universal Orlando or its fab new ride? Head on over to the ATD forums and join in the chat.

Want to try this incredible new ride for yourself? Click here, to view our great value Universal Orlando Resort tickets.