Walt Disney World Tickets , Orlando
By ATD’s Orlando Experts, Susan and Simon Veness
Disney is known world-wide for their Imagineers, Universal Orlando’s boasts the Universal Creative team, and the SeaWorld parks rely on Deep Blue Creative for their artistry, but along with those well-known groups are an immense array of specialists who apply their skills to create beloved shows, attractions, parades and themed elements. Meet Cindy White, designer and consultant.

Just as the special little touches in the theme parks bring them to life, so too do the stories behind the creative process that inspired them in the first place. Cindy White is one of those artists who are brought in on a project-to-project basis, and she has worked in all of Central Florida’s theme parks, as well as Disneyland Paris and Tokyo Disneyland. We spoke with her about some of her Disney design contributions:

Q) You worked on the gothic arches for the former Cinderellabration, now Mickey’s Royal Friendship Faire. Was their design inspired by specific arches from real life?

A) [Cinderella] Castle is a charming, Disney-esque mélange of parts of Neuschwanstein, multiple gothic cathedrals, and maybe toss in a little Chambord [Castle] and there you are! The Cinderellabration staging and arches were a modification of the earlier stage show I designed for Tokyo Disneyland’s Cinderellabration two years earlier, with the gilded gothic arches at Walt Disney World being a nice scenic addition that would give Walt Disney World Entertainment the opportunity to use them for other show projects. I should have a favorite castle out of all the Disney parks, but each one tells a prefect little visual story. I think Walt Disney World’s is the most gothic. 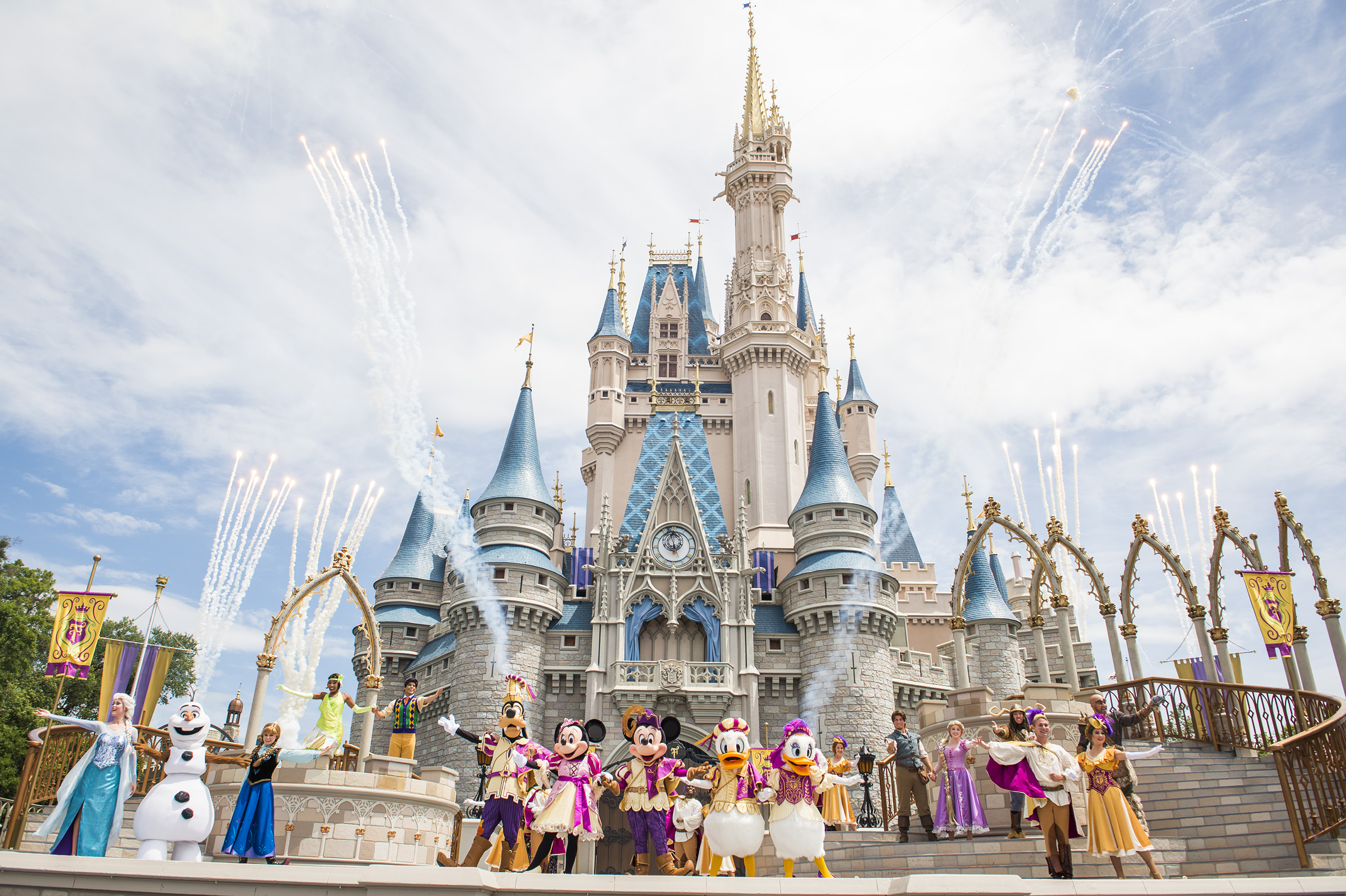 Q) We remember the Move It Shake It Celebrate It parade as one of Disney’s most energetic. Were there any specific challenges in creating those parade elements?

A) The big, wonky-shaped gift boxes and swoopy party hats needed to have the look of movement and energy, even while being stopped on the street for eight to ten minutes. Anytime you design parade units that are part of a stop, it helps to have the illusion and sweep of movement, hence the boxes with convex sides, swoopy hats and flying ribbons.

Q) You also worked on the pirate ship float in the Walt Disney World Christmas parade. What was that process like?

I bought quite a few books on 17th and 18th century ship design and building, and invested in a set of ships curves to draw the sections and plan-view with the right feel. From the shape of the hull to the detail sheets showing the carved Seahorses and gold figurehead lady in front, there was easily six or seven times the drawing required, so I was scrambling to get it all done. I have nothing but awe for the people who designed the frigates and caravels that crossed our oceans, after researching pages and pages of drawings on yards, decking, sail structure, keel, and etcetera. They were the aircraft of the day. My float only dealt with the challenges of driver vision, telescoping masts and prop cannon. I also used those designs on a huge state of the art Captain Hook’s ship for Tokyo Disneyland’s enormous Electrical Parade: Dreamlights. 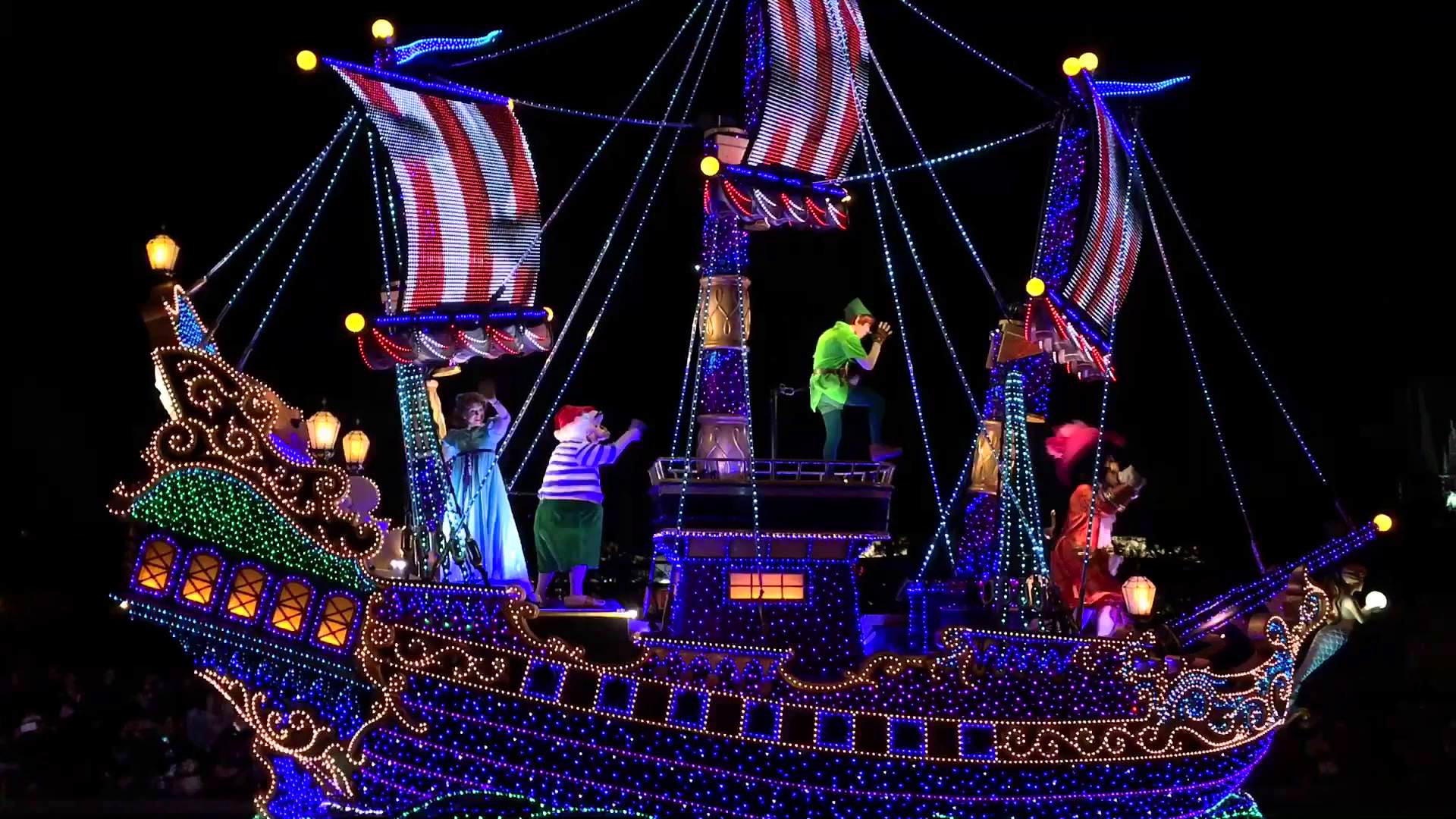 Q) Which parade was your favourite to work on, and why?

A) Electrical Parade: Dreamlights at Tokyo Disneyland opened in 2002, with thirty-plus units. The design intent was to present a traditional electrical parade feel, but with top-notch technology and perfectly melded music and lighting. We have replaced six to eight units every four years, added new ones to keep it fresh, and always included delightful new technological surprises without losing the beautiful music and lighting that makes an electrical parade an electrical parade.  It is unique among the 1970s era electrical parades currently at the other Disney parks, not only in the use of programmed lighting in time to the score in each float, which makes each unit like a complete little lighting design, but also because many of the floats are populated with subtly-lit live characters that allow our director to create complete little shows as they pass by.

Q) Was there anything you did at Tokyo Disneyland that ties back to Walt Disney World?

Q) The set for Epcot’s Candlelight Processional was another project you worked on. Do you take inspiration from previous sets, or do you come into it with a design in mind that is completely unique?

A) Forrest Bahruth was the show director, and I got to art-direct his vision of creating modern, vibrant stained glass windows with a star motif, a new overhead star, and most importantly, he want to get the entier tree riser back into a traditional pyramidal shape…no easy task on the low-rise America Gardens stage. There are “singing Christmas trees” in large churches all over America and beyond, but Disney’s needed elegance—hence the gilt tracery balustrade—and safety above and beyond any choral riser out there. 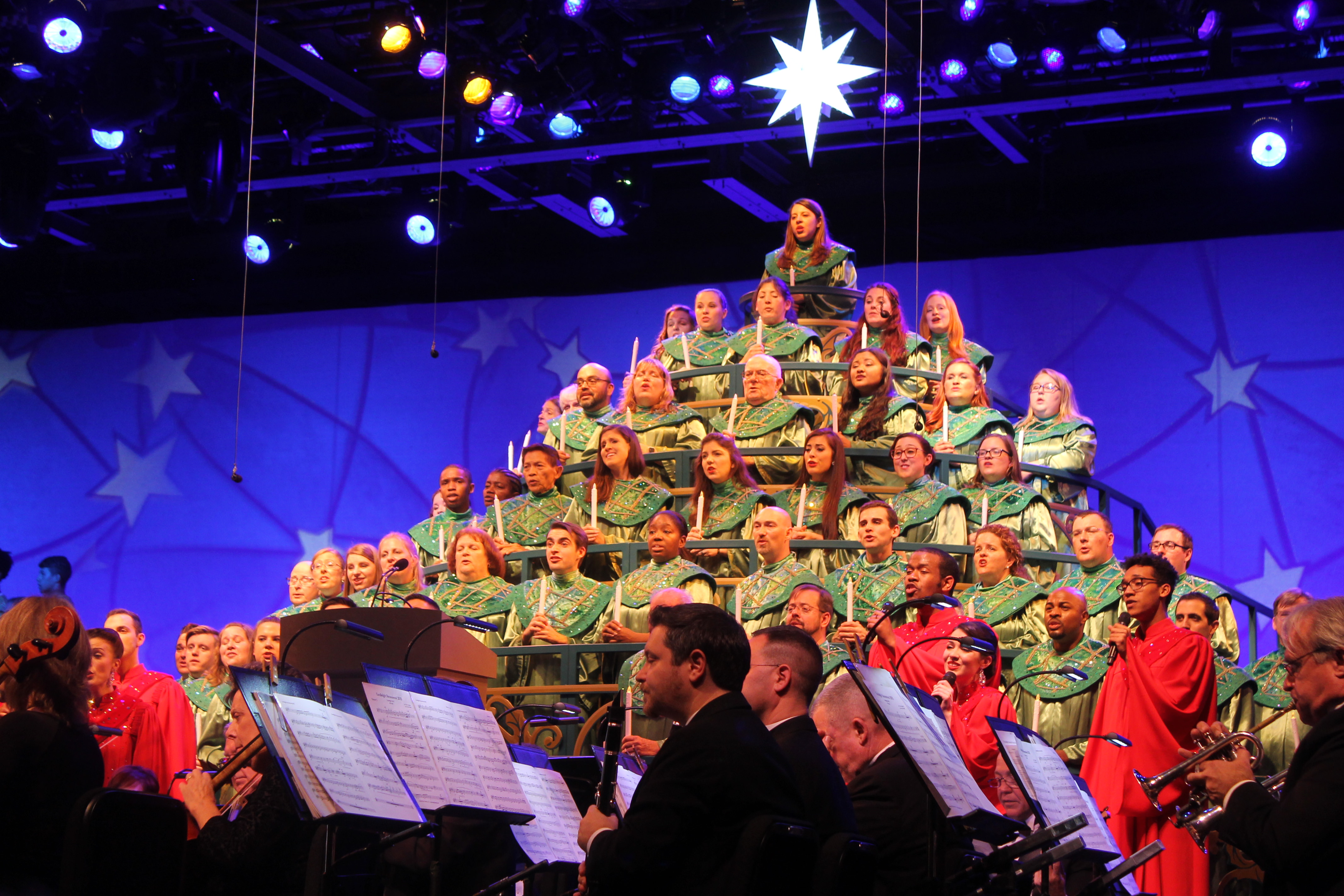 Q) Of all the work you have done with Walt Disney World, what are you most proud of?

A) No favorites, truly. Every project is a fun collaboration. It opens and runs for a finite amount of time—most entertainment things have a shorter shelf life than attractions—and then it closes, which is the world of live show and theatre. [At] my age, there are hundreds of projects to reflect back on, and the big and small all involved getting to play with other creatives and engineers, often many of them old friends, again and again. [It would be] like picking your favorite child.

Q) Was there ever a project you worked on for Walt Disney World that proved an interesting challenge?

A) I guess it might be interesting to know that all the parade floats have to clear the various storage buildings backstage. Those heights are in the 18’-20’ [range]. Even when you are being asked to design inherently tall things, like pirate ships and a castle, it has to bend, telescope or hinge down for storage. Another clearance issue is holiday décor on Main Street, which often stretches across the street and limits the heights of floats during the show as well. Even if we can engineer to great height, it has to be planned for. 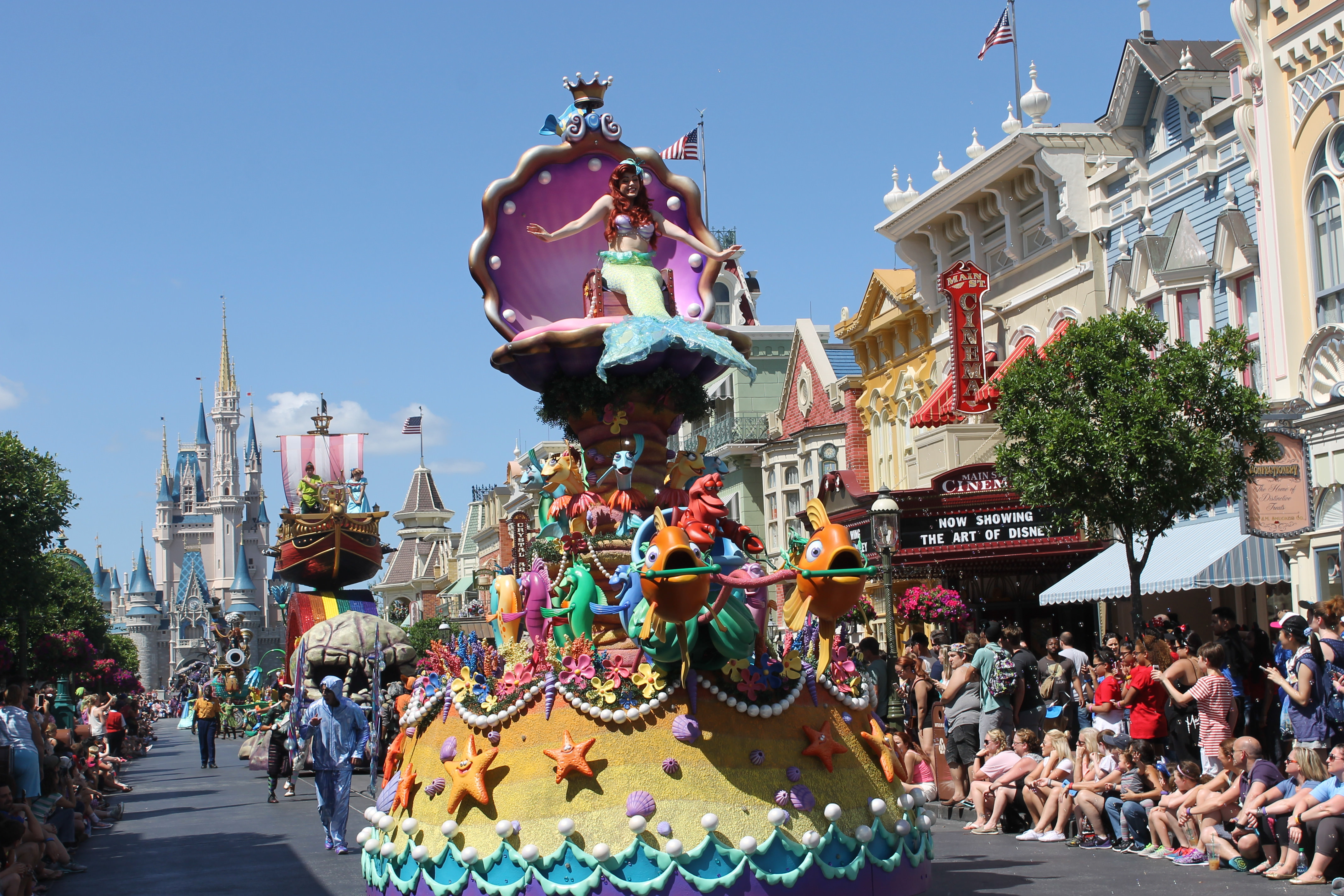 Q) What was it like to work with Disney Imagineering?

A) It was a wonderful place to begin work. [I was] at WED [Enterprises] right out of college and had as my cubicle mates other young designers who have been my friends all my life. All of us eventually quit to go to work for ourselves or at other design companies, but there really was nothing quite like that creative energy of pre-Epcot Imagineering. Those folks know who they are, and we were all blessed to be a part of a truly magical time.