The Firework Displays You Need to Put on Your Bucket List!

In the UK we generally tend to associate fireworks with Bonfire Night, New Year's Eve, possibly weddings and particularly special occasions. In the US, fireworks are absolutely essential to an Independence Day celebration. However, in the likes of Orlando, the world's theme park capital, where every day is a day to celebrate, fireworks can happen any and every day of the week.

Take a look at these fascinating cities epic firework displays... We are proud to say that one of the capital's most reputable firework displays takes place in our very own South London! The Blackheath fireworks display celebrates Guy Fawkes Night and has become a tradition for many Londoners far and wide, especially those living in South East London. Located on Blackheath's vast heath land, Blackheath fireworks is held on the closest Saturday to Guy Fawkes Night and unlike firework displays such as Battersea and Richmond, admission is completely free. If you're London bound, be sure to enjoy one of the capital's most famous firework shows!

You won't be surprised to know that the New Year's Eve Fireworks display at Dubai's Burj Khalifa is, as many a phenomena in Dubai, record breaking.

The 2014 New Year's Eve firework display was hosted by the world's tallest building, the Burj Khalifa, and currently holds the Guiness World Record for the largest firework and pyrotechnics New Year's Eve display. The fireworks show lasted a duration of six minutes and lit up the Dubai night sky with an outstanding 500,000 fireworks extending across 62 miles of Dubai's coastline. This record breaking firework display took ten months to plan and was controlled by one hundred computers. It get's even more dazzling still; the show concluded with the piece de resistance, an artificial sunset!

What better way to celebrate San Francisco's beautiful and symbolic Golden Gate Bridge's anniversary, than with some brilliant fireworks to highlight its magnificence. Held on the 27th May 2012, the firework display celebrated the 75th birthday of the city's greatest and most recognisable man made structures. Those fortunate enough to have witnessed the memorable firework display described it as 'possibly the most breathtaking of fireworks' they had ever seen. It's only three years now till the Golden Gate Bridge celebrates it's 80th birthday and we're anticipating a big birthday bash! So if a visit to the Fog City is on your bucket list, why not make it a special and unique trip by attending this extraordinary birthday party? 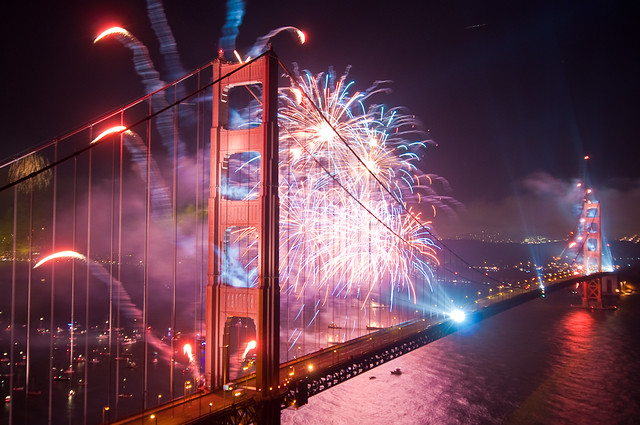 You can only imagine what a firework display looks like in the gleaming City of Lights, where bigger and bolder is always better. 4th of July  and New Years' Eve firework displays are held at a number of Las Vegas' most esteemed hotels and are just as bright and as brilliant as the city itself.

Popular firework displays are hosted by Caesers Palace and Stratosphere. However, considering you can see these blazing fluorescent fireworks from far and wide you needn't head to the exact hotel they are being shown to see how they illuminate the Vegas sky. Enjoy the firework displays of multiple Vegas hotels with spectacular panoramic roof top views at luxury Las Vegas nightclubs like Foundation Rooms at Mandalay Bay, Ghost Bar at the Palms or Voodo at the Rio. The combination of glamorous rooftop clubs, the buzzing nightclub atmosphere and the New Year's Eve or 4th of July good vibes sounds like the perfect way to catch the City of Lights firework displays!

Orlando Florida - The Theme Park Capital of the World

In the theme park capital of the world you can choose whichever day of the week you might like to view your fireworks, because, thanks to Walt Disney World, there is not a single day that goes by without a firework display. Be it Halloween, a memorable moment in theme park history, an annual holiday event or the crowning of a new Disney princess - there are fireworks in Orlando for absolutely everything! 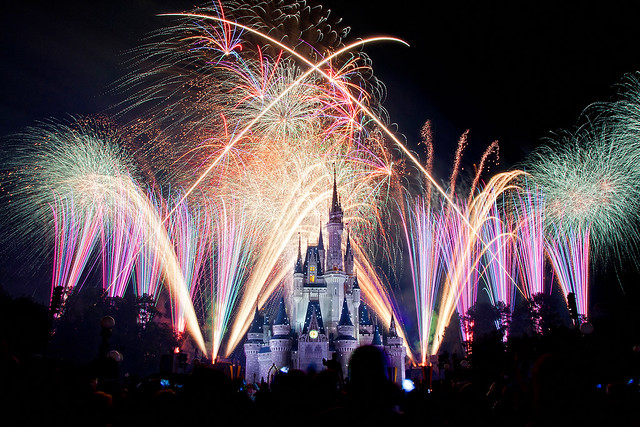 Wishes Night-time Spectacular is Walt Disney World's Magic Kingdom's most famous nighttime spectacular. It's an epic light and firework display, complete with appearances from the world's favourite Disney characters, a heartwarming narrative, tons of magic and even more emotion. Wishes Night-time Spectacular uses the Cinderella Castle as it's backdrop, transforming the symbolic castle into a variety of luminous colours - making for some very impressive photography.

If you love movies as much as we do then Universal's Cintematic Spectacular will pull at your heart strings. It's a nostalgic look back at Universal Studios' 100 years of making movies. This brilliant celebration of film combines fireworks and pyrotechnics, light and water and the most memorable of Universal's movie scenes to create a fully comprehensive and utterly mind-blowing display like you have never seen before. To mark the beginning of the French Revolution and the Storming of the Bastille, each and every Bastille Day, which falls on the 14th of July, a dazzling fireworks display honours this monumental moment in French history. In Paris, fireworks explode into the sky in the surrounding areas of the Eiffel Tower, igniting the River Seine and the emblematic tower in an array of vivid colours. Of course, if it isn't convenient for you to be in Paris on the 14th July, you can always rely on a night-time spectacular to light up the skies at Disneyland Paris. Lighting up the sky with some 40,000 blazing fireworks, Macy's 4th of July Fireworks is The City That Never Sleeps ultimate Independence Day fireworks show. The iconic New York upscale department store has sponsored the 4th of July fireworks since 1976, making it a quintessential New York and Independence Day tradition. Great viewing locations for this spectacular 4th of July display are Brooklyn Bridge Park, Brooklyn Heights and South Street Seaport.

Get your attraction tickets with Attraction Tickets Direct when travelling to any of these destinations.