Fun and interesting facts about Warwick Castle (and why you should visit it!)

Warwick Castle was built in 1068 by William the Conqueror on the banks of the River Avon to guard the Midlands against rebellion and has a full and very varied history.

It has been home to the Earls of Warwick since 1088 when Henry de Beaumont was made the 1st Earl of Warwick. The de Beaumont family held the castle until 1242 when de Beauchamp family took the title until 1449 and passed it to the Nevilles until the death of Richard Neville “the Kingmaker” during the battle of Barnet fighting against the King in 1471.  The title then passed to the Plantagenets until 1478 when it ceded to the crown until being granted to John Dudley in 1547. The castle was held for Parliamentary forces during the English Civil War under Robert Greville whose family held the castle until 1978 when it was sold to Tussauds Group. 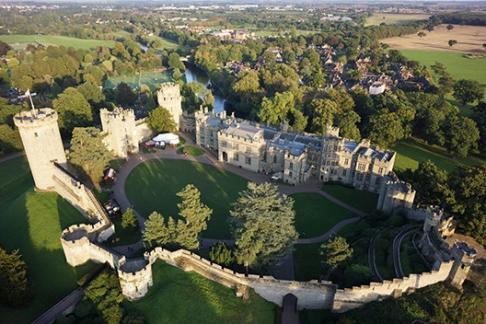 Several battles were fought around Warwick Castle.  During the Barons War in 1264-47 rebels from Kenilworth Castle launched a surprise attack and took the castle.  During the English Civil War the Royalist forces surrounded and sieged the castle in August 1642 but the castle was relieved before it fell.

Many monarchs and famous people have been hosted as either guests or prisoners at Warwick Castle including imprisoning King Edward IV in the 15th Century and Piers Gaveston in 1312.  Visitors include Queen Elizabeth I, Queen Victoria, Queen Elizabeth II and Diana Princess of Wales.

The original design of the Castle was a wooden motte and bailey design.  It was rebuilt in stone in the 12th century. The town facade of the castle was refortified in the 14th century to the facade we see today. 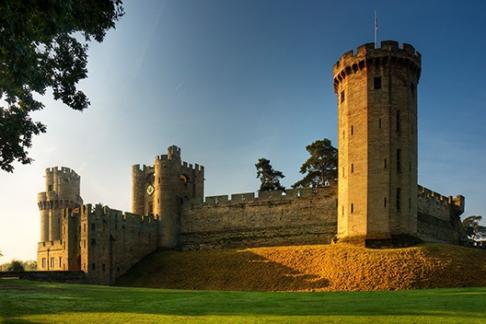 Having been used to house famous prisoners in the past the Castle dungeon, dating back to 1345, is now home to a 50 minute interactive attraction.  This attraction is not suitable for children under 10 years and those under 18 must be accompanied by an adult.

There are many other things to see at Warwick Castle such as the Bowman Show, The Falconer’s Quest and a talk about the Mighty Trebuchet.  There is also an evening show called The Dragon Slayer this summer with stunt riding, battles, fire jousting and a light projection show and fireworks.  On certain saturdays there is also the opportunity to enjoy a Medieval Feast in the evenings. Every day, and twice a day during the Summer Holidays, enjoy the spectacle of the Wars of the Roses show, another that features stunt riding and jousting.  Why not check out the castle itself, its incredibly beautiful interiors and its towers and ramparts. Or try the Horrible Histories Maze and the gardens if you prefer being outdoors. 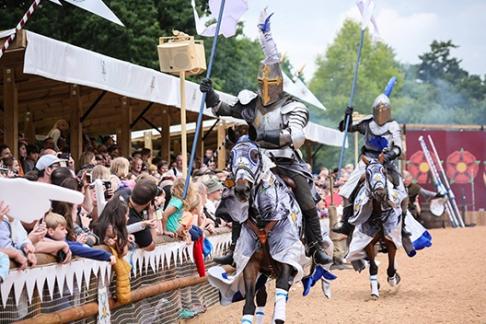 To refuel during your visit why not stop at The Coach House and enjoy a scrumptious afternoon cream tea with homemade sandwiches, freshly baked scones with clotted cream and jam, a selection of mini cakes and tarts served with a pot of tea for two.