Shortlists , Fun Stuff
Calling all Lion King fans!
There are so many ways to experience the Lion King at Walt Disney World, but these are some of our favourites…

If you’re a big fan of the Lion King (who isn’t?) we’re sure you’re already excited for the release of Disney’s new, live-action remake of this classic tale. This summer, on July 19th 2019, the new Lion King movie will be released in cinemas and we can’t wait!

If you’re planning a visit to Walt Disney World soon and already have your Disney tickets, you’ll be pleased to know that there are lots of fun ways to relive the Lion King Story at the Disney theme parks. Here are just a few ways you can get involved…

1. Start your day with Simba waffles 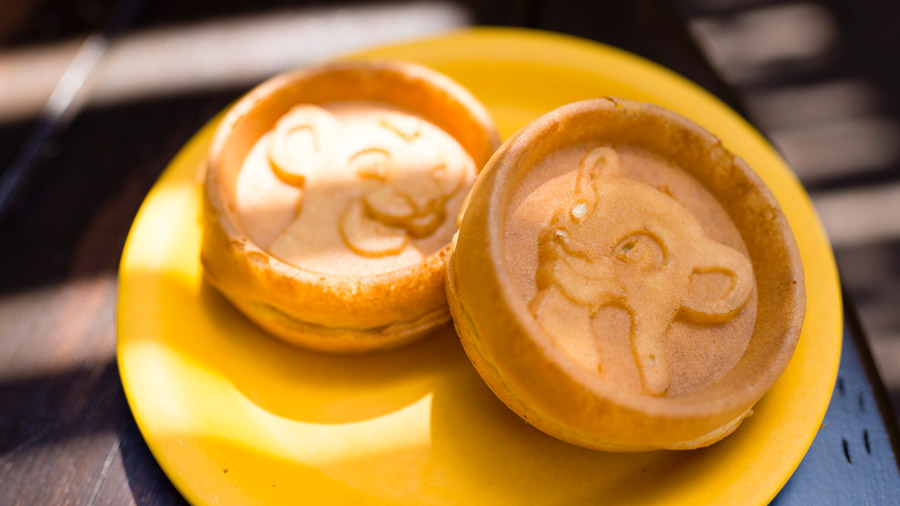 If you’ve been to the Disney theme parks before, you’ll know just how big they are, which means lots of walking during the day. That’s why you’ll want to start the day off with a hearty breakfast to give you the energy you need for exploring.

You might have heard of the famous Mickey waffles before, but have you heard of Simba waffles? These tasty treats are just as delicious, and they come with a print of Simba on top- perfect for that Instagram foodie shot!

You can find these waffles at various locations throughout the Walt Disney World Resort. Try the highly-rated buffet breakfast at Boma (in the Animal Kingdom Lodge Hotel) and sample mouth-watering flavours from more than 50 African countries. There's plenty of Simba waffles to go around and they're served with a side of syrup or Nutella. You can also head over to Tusker House, for a filling buffet breakfast alongside Donald Duck! You’ll find Simba and Nala waffles here.

2. Get up close to lions

You’ll feel like you’ve stepped straight into the Lion King movie on the fantastic Kilimanjaro Safaris attraction. Get ready to board a safari vehicle and explore the 110-acre Harambe Wildlife Reserve at Disney’s Animal Kingdom Theme Park. This is home to 34 different species including rhinos, cheetahs, crocodiles, giraffes, elephants, zebras and of course, lions!

You’ll get a close-up view of these incredible creatures and your driver will tell you all about them, sharing interesting facts about the pride. There are also hyenas, so you’ll get the chance to see what the menacing trio Shenzi, Banzai and Ed would look like in real life.

3. Watch the Festival of the Lion King As you can probably imagine, Disney’s Animal Kingdom theme park is one of the best places to find Lion King-themed attractions. Fans won’t want to miss the breath-taking Festival of the Lion King show, which is a stunning Broadway-style performance that brings the Lion King story to life right before your eyes.

This colourful show features detailed puppets, acrobats, fire dancers, stilt walkers, dazzling costumes and appearances from some of your favourite characters. You’ll be singing along from start to finish to iconic hits from the movie like “Circle of Life”, “Hakuna Matata” and “Can You Feel the Love Tonight?”.

Make sure you check the show times when you arrive at the park as this Lion King show is an absolute must-see.

Get ready for your close-up with Rafiki! This wise character can often be found at Rafiki’s Planet Watch and will be happy to pose for pictures and sign autographs. You’ll also be able to enjoy animal encounters with sheep, goats, donkeys, cows and pigs in this area.

This summer, in celebration of 25 years of the Lion King, you’ll be able to join in an epic dance party hosted by Rafiki and Timon. You better brush up on your best dance moves because you won’t want to miss this.

5. Show off your dance moves 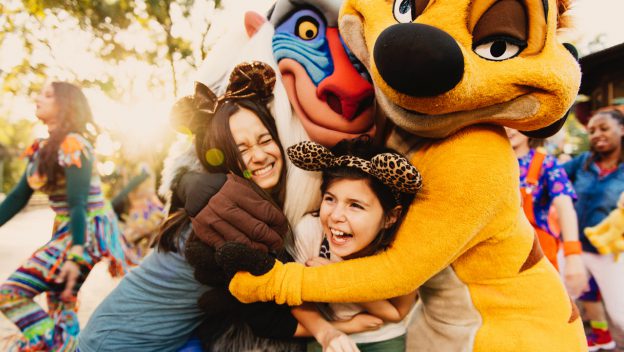 As we’ve already mentioned, this summer, you can attend an amazing Lion King dance party. The Hakuna Matata Time Dance Party is guaranteed to be a hit with kids and big kids too! Expect music, dancing and lots of fun games as popular Disney hits are given a new twist. The party takes place at the Discovery Island Stage in Disney’s Animal Kingdom Park, and Rafiki and Timon will be joining you as you throw some serious shapes on the dancefloor. 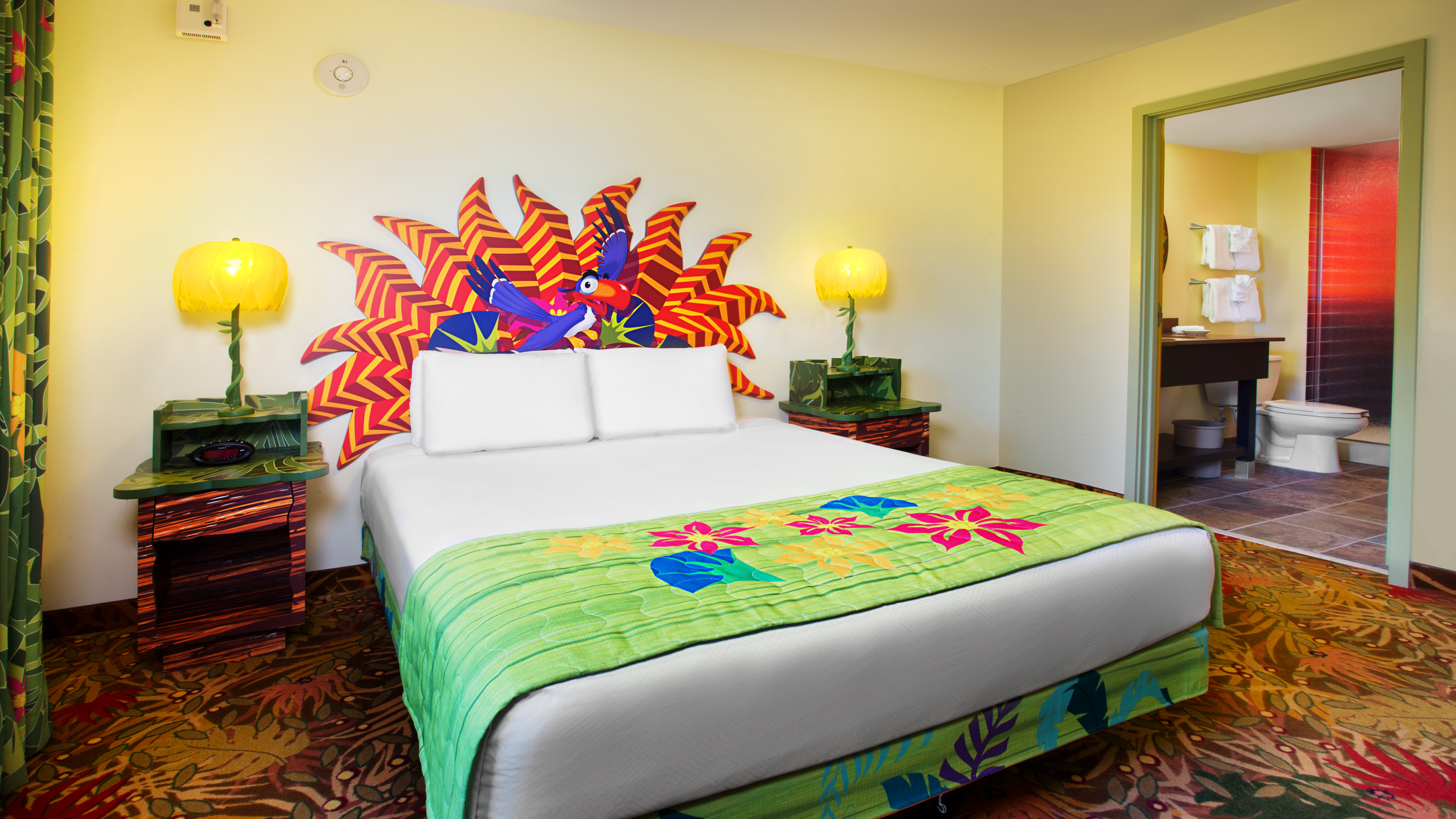 Did you know, that at Disney’s Art of Animation Resort you can stay in a Lion King-themed suite? That’s right, these family suites are inspired by the movie, with themed décor, colourful artwork and bold prints. The lamps and shower curtains are even Lion King-themed.

The suites are designed with families in mind, with each one sleeping up to six guests. There’s also a dining table, a kitchenette and a living room for when you want to unwind at the end of the day.

If you’re staying at Disney’s Art of Animation Resort, take the time to explore the hotel grounds as you’ll find some huge Lion King figures which make for a great photo opportunity. Look out for Timon, Pumbaa, Simba and Scar!