Play, Eat and Sleep At Universal Orlando, with Hagrid, Bigfire and Endless Summer

By ATD’s Florida Experts, Susan and Simon Veness
With the opening of a major new attraction, a woodsy ‘campfire’ themed restaurant and a massive value-conscious resort packed with amenities, Universal Orlando Resort now has three spectacular reasons to play, eat and sleep like never before!

PLAY: In our 24 May blog we gave you a sneak peek at Islands of Adventure’s newest attraction in the Wizarding World, Hagrid’s Magical Creatures Motorbike Adventure. Today we’re going to take you with us on a spin around the Forbidden Forest onboard Hagrid’s funky motorbike, with its handy-dandy sidecar.

First, let’s take a walk through the queue. If you’ve been to Islands of Adventure before, you’ll remember the castle from the attraction’s original incarnation as Dueling Dragons, then as a Wizarding World castle with its Dragon Challenge ride, and now it’s become the stamping grounds for Rubeus Hagrid, teacher of the Care of Magical Creatures at Hogwarts Castle. 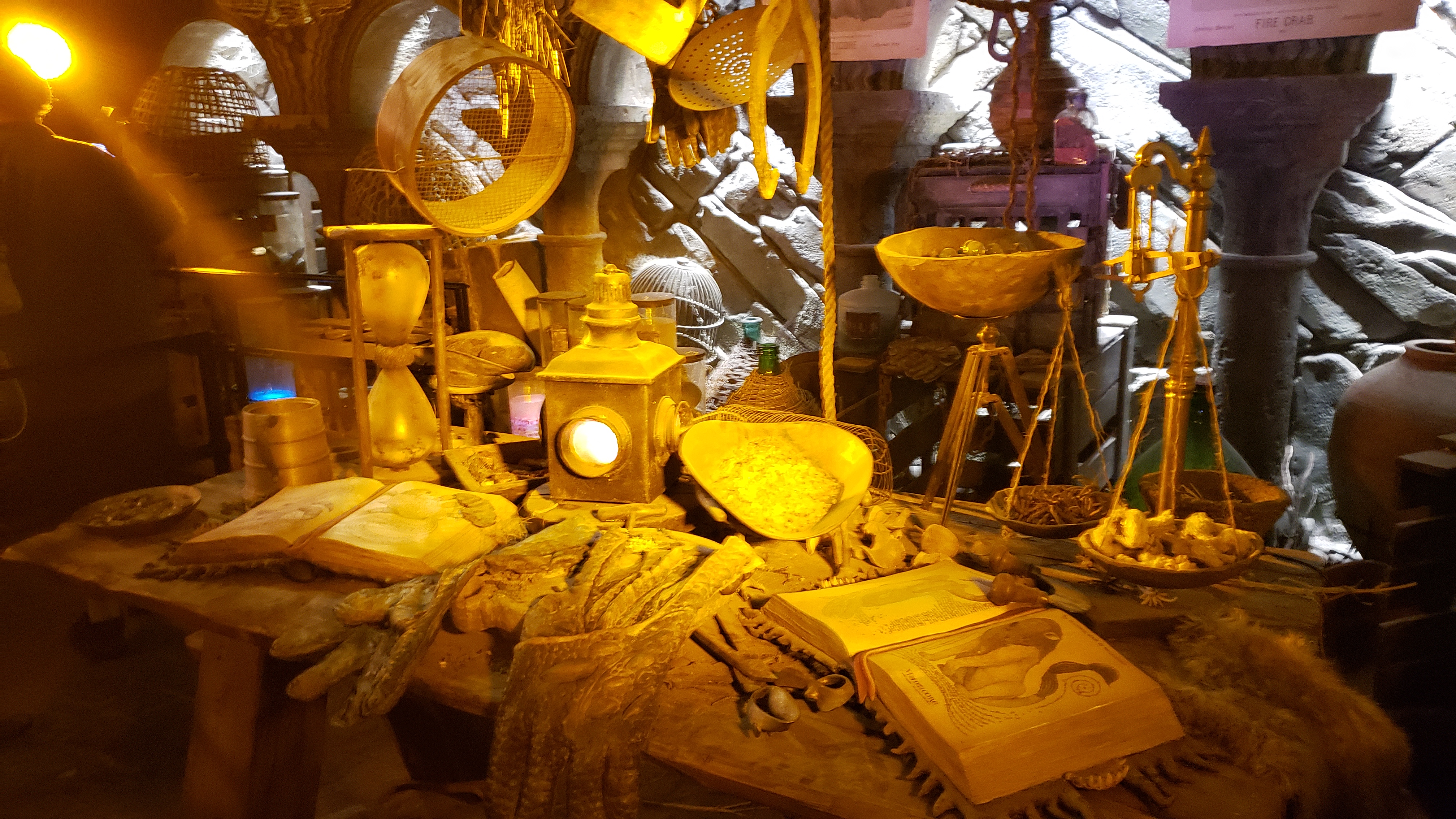 Hagrid’s gentle, if a bit naive, touch is everywhere, from the pumpkins he’s grown (complete with slashing claw marks from one of his creatures!) to the “egg room” where various eggs await hatching, and the makeshift laboratory where he tinkers with magical creations. Along the way, you meet Hagrid and Arthur Weasley, who prepare Hagrid’s flying motorbike for a journey to the edge of the Forbidden Forest. What could possibly go wrong? 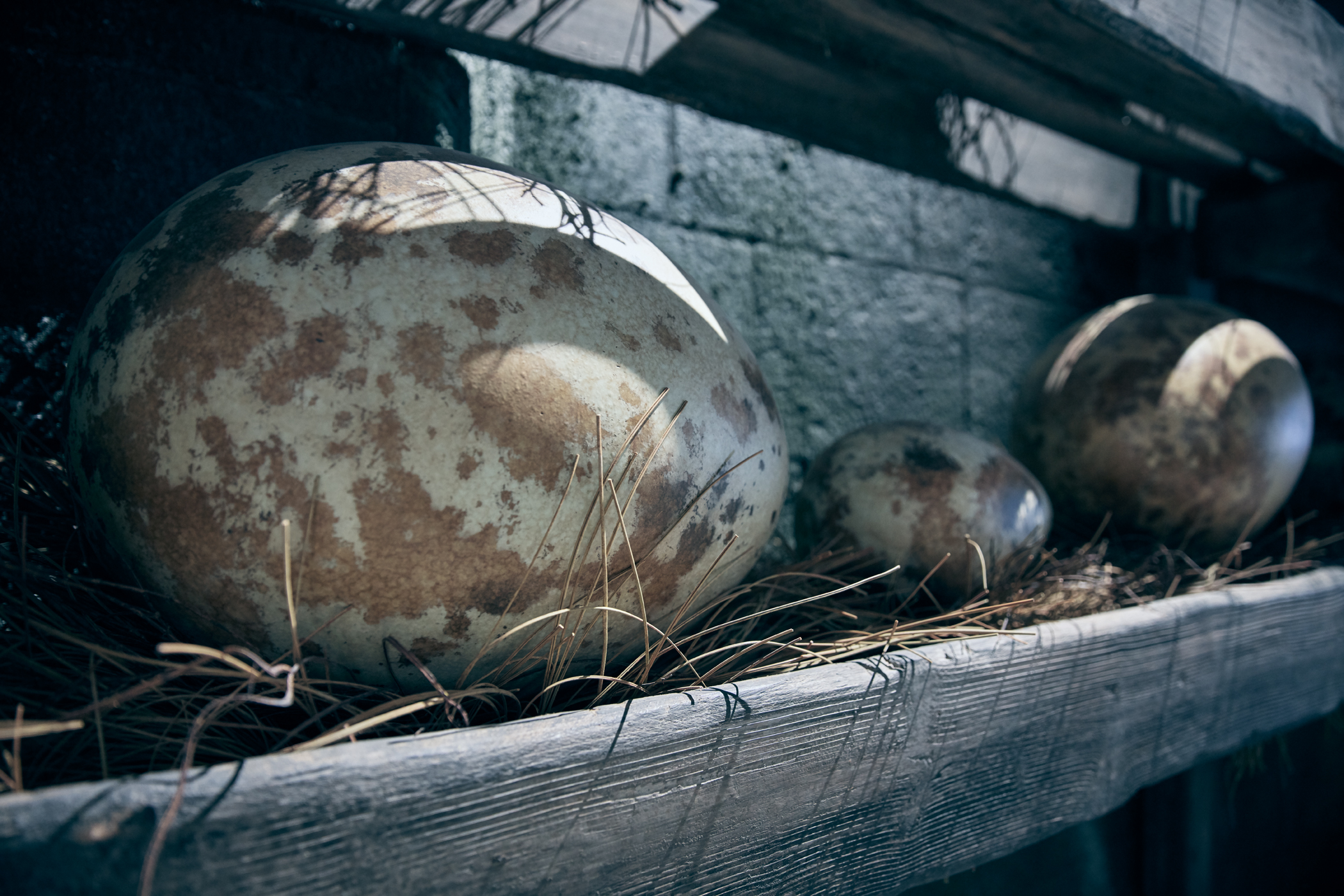 Before you take off on your magical motorbike adventure, though, you have to choose whether you want to sit on the motorbike or ride in its sidecar. For some, it’s an easy decision (do both!), but if you’re not certain which one to try first, here are the Pros and Cons of each:

-The motorbike makes you feel more in control of the ride, as if you’re actually DOING the steering and instigating the bursts of power during the launch sequences. It’s roomier for guests who may be concerned about the ability to fit comfortably on the ride (and remember, there is a test vehicle that will help you determine if it’s a good fit). However, if you’re a nervous rider, you may feel slightly less secure on the motorbike than you will in the sidecar. Both are entirely safe and entirely secure, but the illusion is definitely different.

-The sidecar’s ride feels entirely familiar, with high sides that create a greater sense of security. While it looks like it might be more ample in size, though, its restraint system is actually a bit more restricting than the motorbike for larger guests. The ride experience is different too, in that you feel as if you’re being taken for a ride rather than participating in creating the ride experience. And that’s good news for children who may be making this big step up from kiddie coasters. 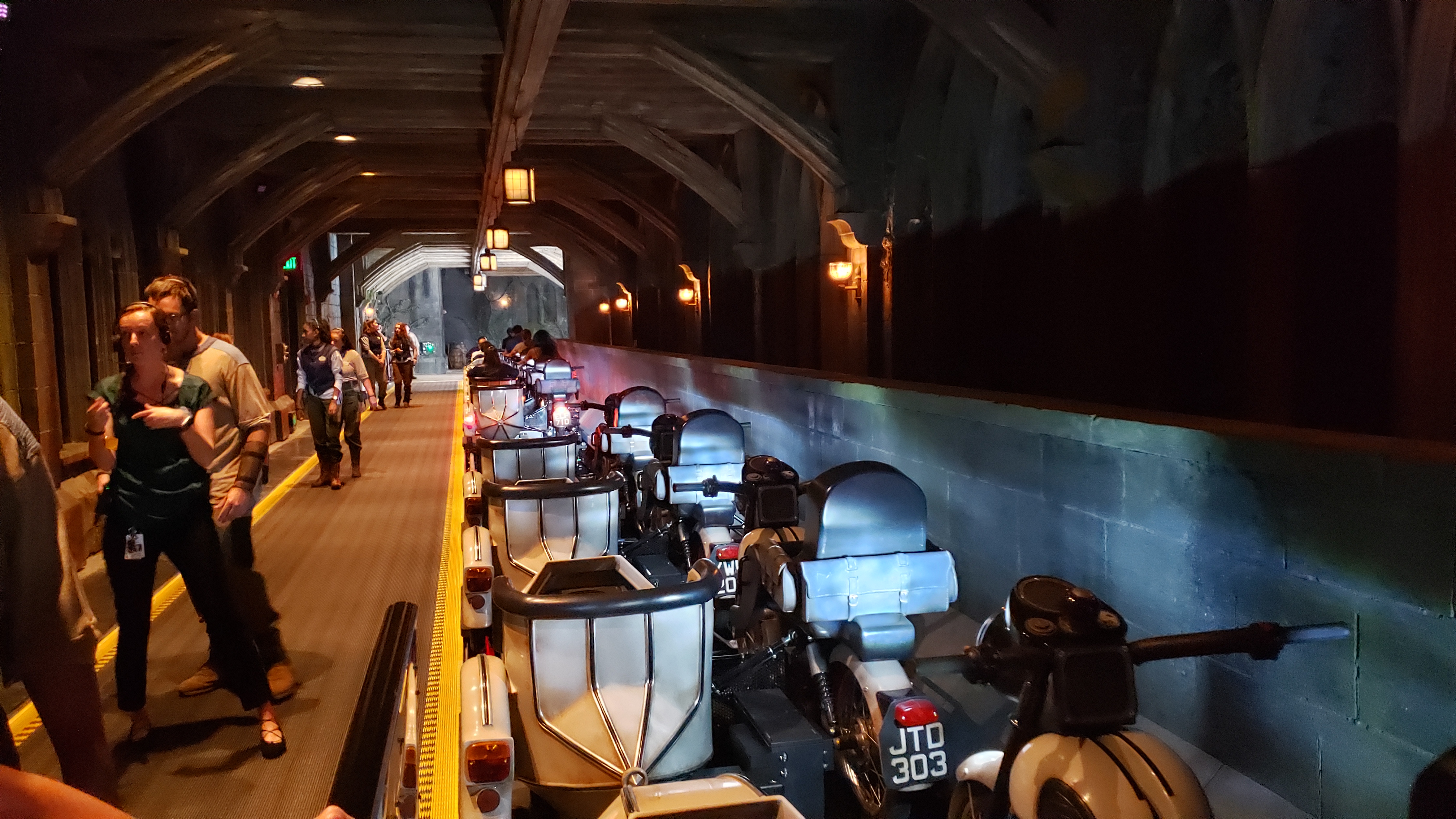 And that brings us to another point: the track you can see from the queue appears quite gentle and undulating, and may lull you (as it did us!) into a false sense that this is a tame, family coaster. While it definitely falls within the family-friendly category for coasters, it’s surprisingly dynamic, and we’d put it at the top end of that category.

Imagine if Big Thunder Mountain at Magic Kingdom and Cheetah Hunt at Busch Gardens had a baby, and you’ve got some idea of the experience here. Turns are tight and intense, swoops are smooth and exhilarating, there is an extended (but comfortable) backwards segment, and there are no big drops or inversions (but there IS a surprise element!). If forced to put an age recommendation on it, we’d land somewhere between 9 and 12 as ideal ages for a first ride. But you know your kids best, and as long as they make height (48in/122cm) even younger kids are good to go! 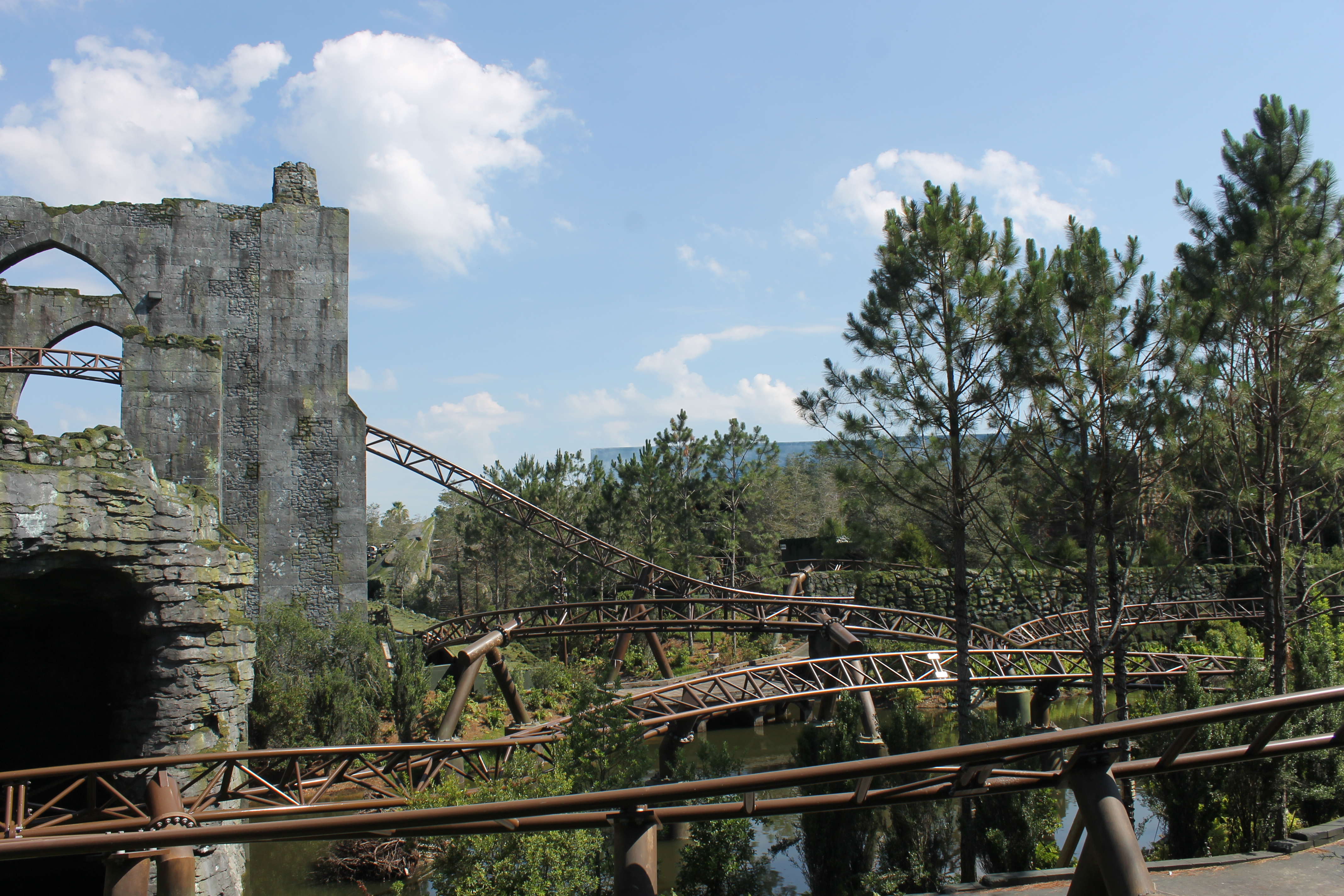 The ride itself reaches a top speed of 50mph, but when you’re on it and each of its seven launches go off, it feels MUCH faster! There are no screens here; instead, your motorcycle slows down enough for you to view several set pieces, including Hagrid himself attempting to tame a gigantic Blast Ended Skrewt (watch out for the blast that comes from its end!), Cornish Pixies playing havoc with Arthur Weasley’s flying Ford Anglia and lovely nods to both Centaurs and unicorns.

But it’s not all lightness and joy. No sir! This is the Forbidden Forest, and it’s scary for a reason. We won’t give away the big surprise element, nor where it’s located, and will only say that if you survive it (you will) we’re absolutely certain you’re going to love it as much as we did.

Hagrid’s Magical Creatures Motorbike Adventure rocketed its way into our top coasters for families, though even serious thrill-seekers are going to love it, too. It’s fun, it’s fantastical, and there is no question it has enormous repeat value, so plan your day accordingly! 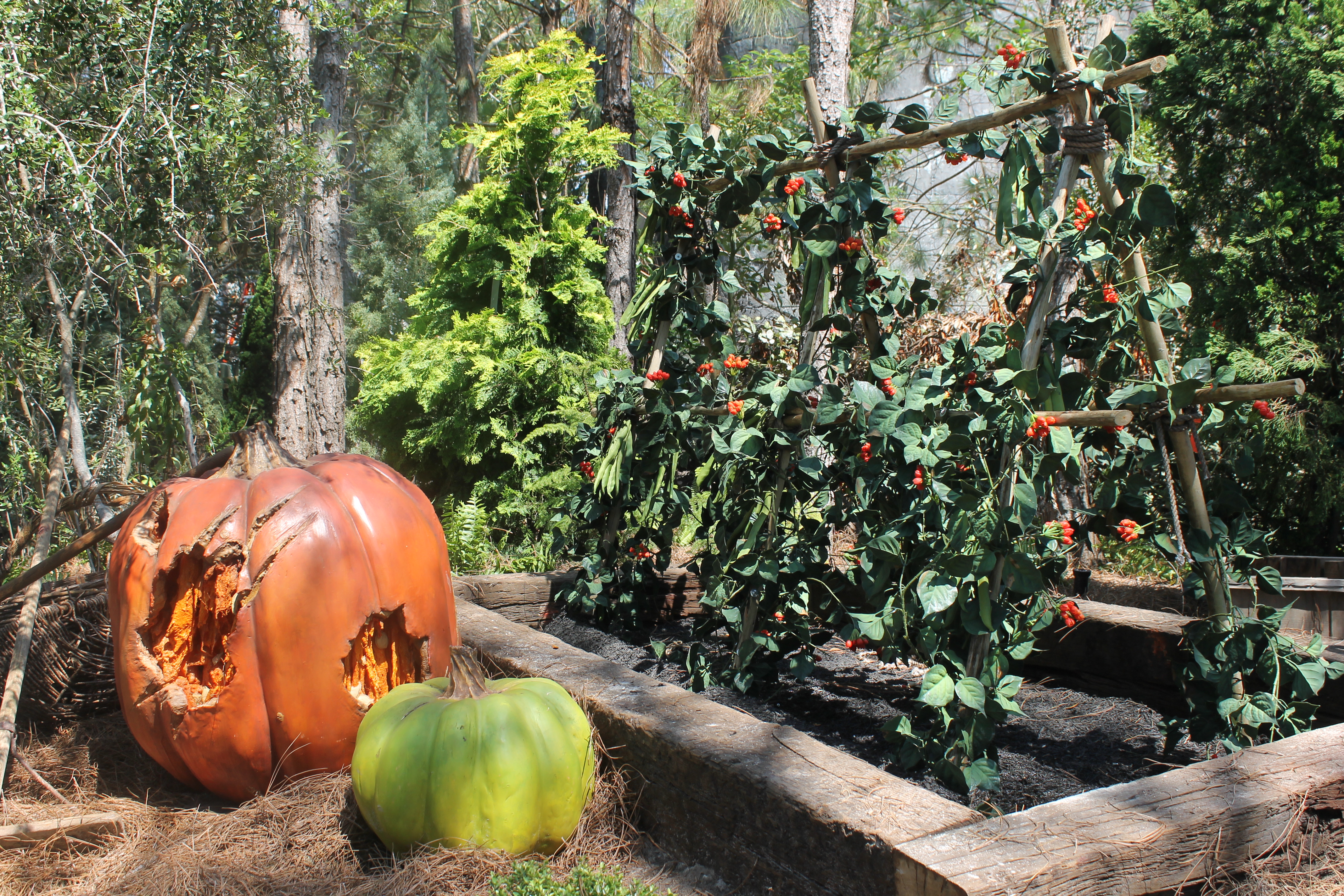 EAT: After all that excitement you’ve probably worked up an appetite, and if you’re looking for a break in the CityWalk shopping and dining district, the fab new Bigfire American Fare  eatery will make its grand opening soon (date to be announced).  We dropped by for a media preview of the restaurant and its cuisine, to discover what’s in store, and what you shouldn’t miss when you place your order.

Bigfire is themed to the northern backwoods of America, where outdoor pursuits are a huge part of the appeal. The food reflects that cosy, comfortable style, featuring items such as Buttermilk Fried Chicken, Shortrib Pasta, Brook Trout, steaks and Fried Green Tomato Cheeseburger. Definitely try the Campfire Chili with sour cream and cornbread, the stand-out winner for us. We can also recommend The Classic (a classic Old Fashioned with signature select barrel Woodford Reserve bourbon whiskey) and the lighter White Old Fashioned, with Zodiac Black Cherry vodka and a flame-charred fig. 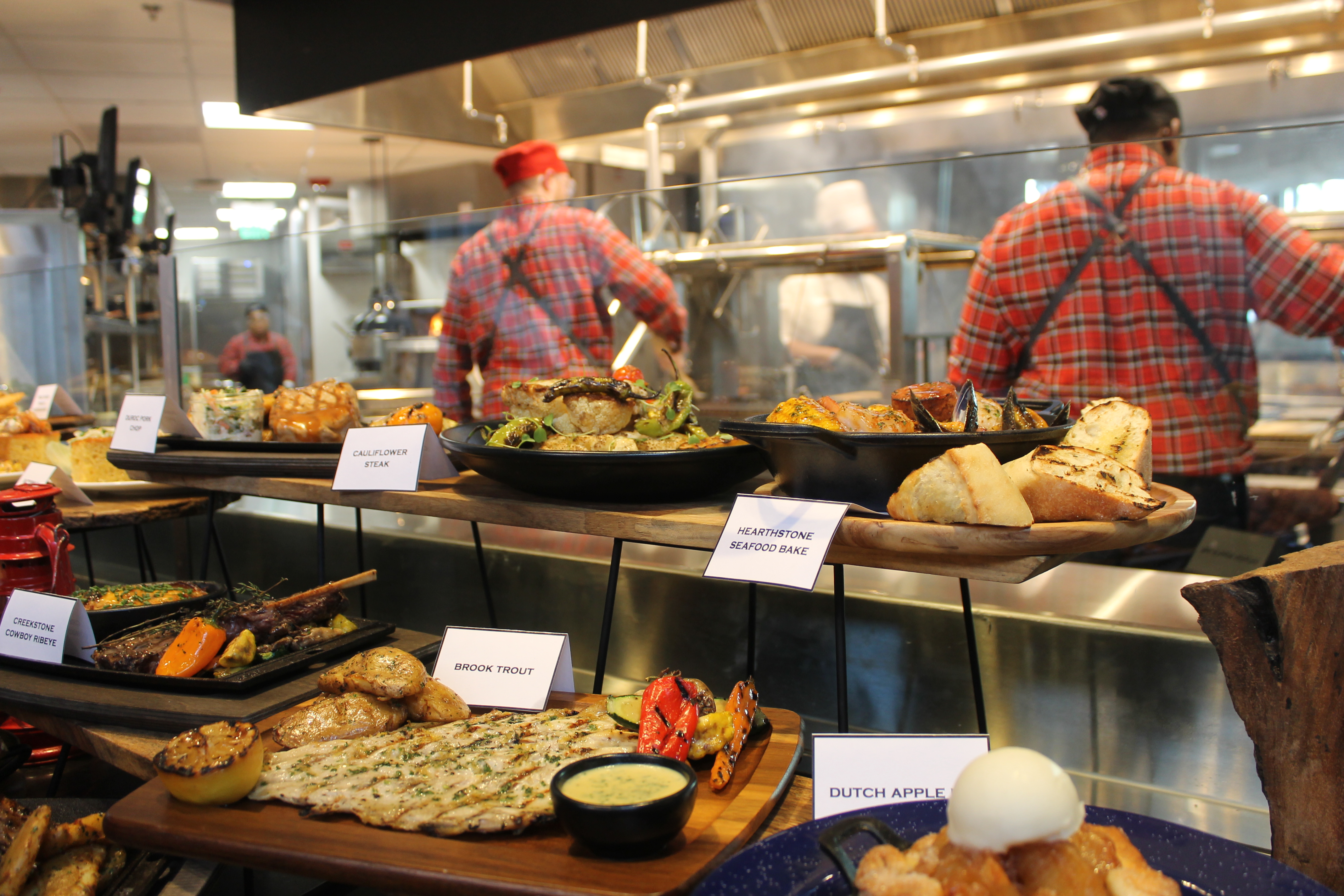 SLEEP: At the end of a long day, there is nothing so comforting as knowing you don’t have to go far before your head hits the pillow, and Universal’s latest offering, Surfside Inn (the first half of the two-part Endless Summer complex of value-friendly resorts) will open on June 27. 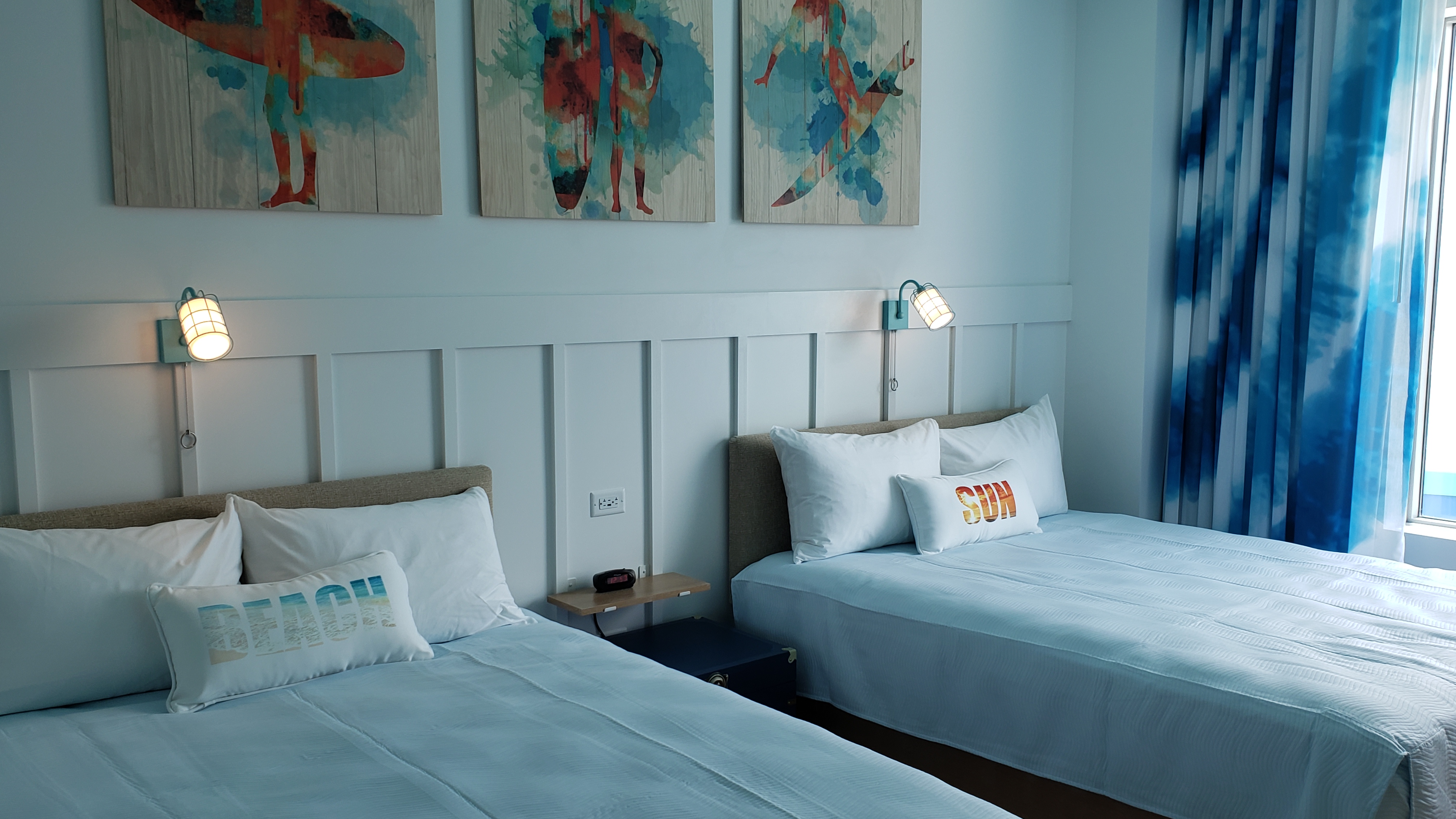 We took a tour and can report that there is a LOT packed into this fantastic budget-conscious choice, including an appealing food court, Starbucks grab-and-go, a full fitness centre, games room, enormous pool, and the coveted Early Entry perk for resort guests, giving them one extra hour each morning to enjoy the Wizarding World.

And you’ll want that extra hour, to give you a jump on the crowds and the chance to ride Hagrid’s Magical Creatures Motorbike Adventure…on BOTH seats!

Don’t have your Universal Orlando tickets yet? Find the right one for you, here. And be sure to join us on ATD’s discussion forums!