Dubai's Coastline - the Eighth Wonder of the World?

Dubai , Dubai , Dubai Coastline
Stats and facts about Dubai's Coastline!
Dubai's spectacular coastline is such an awe inspiring phenomenon that it is often referred to as the eighth wonder of the world. Consisting of three artificial small island groups, which take the shape of three palm trees and The World archipelago, taking the shape of a world map, form Dubai's impressive coastline in the Persian Gulf. Check out ATD's stats and facts about Dubai's coastline!

Dubai in itself is a marvel, with its wealth of luxury living, spectacular hotels, high end shopping and its breathtaking cityscape, that boasts some of the world's tallest and most pioneering architecture to date. As if its glimmering, unique and record breaking skyline wasn't opulent enough, Dubai's coastline is also somewhat sensational. Formed of artificial clusters of islands, The World, which takes the shape of the world map and The Palm Islands, three palm shaped archipelagos, takes this monumental destination to a whole different level of opulence. It would appear that there are no limits to Dubai's sensational excessiveness, so far they will go, that even the destination's coastline is a luxury and its design is still yet be completed, with the cosntruction of The Universe Islands in the pipeline.

These four artificial archipelagos that sit within the Persian Gulf, off the coast of Dubai, were conceptualised by the ruler of Dubai, Sheikh Mohammed bin Rashid Al Maktoum, and constructed by property developer Nakheel Properties. The islands are composed by sand excavated from Dubai's coastal waters and each island cluster has its own breakwater, which takes the form of a crescent. The breakwater acts to consume the impact of waves and protect the islands from affects of weathering on the coast. To see this phenomenal designer coastline is to believe it and so big are  these astonishing archipelagos, they can be witnessed from space.

The World or World Islands in Dubai  takes the shape of a world map. The project went into development in 1994  and was completed some fourteen years later on  the 10th January 2008. World Island's consists of 260 islands with an average of 100 metres of water between each island. The islands are named after countries, individually owned by various organisiations, projects, hotel groups and resorts. 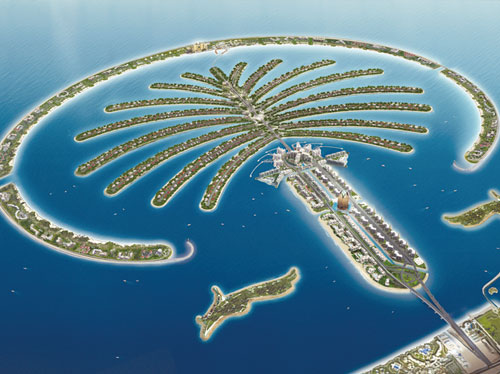 The Conceptualisation of The Universe Nakheel Properties is yet to complete their masterpiece in the Gulf and is due to further enhance Dubai's beautifully astonishing coastline with the construction of another archipelago that will take the name The Universe, taking the formation of the solar system and the Milky Way. The project was announced in 2008, with an estimated completion date between 2023 and 2028, however it would appear that the construction of Dubai's The Universe in the Persian Gulf has been put on hold. The image above is a conceptualisation of how the Dubai coastline will look once The Universe is incorporated.

This magnificent designer coastline is enough to lure tourists the world over to this lavish destination. Attraction Tickets Direct has a range of attraction tickets and experiences to enhance a Dubai getaway, including Dubai helicopter sightseeing tours to marvel at this manmade miracle.