San Francisco , Alcatraz , Travel , Travel Guides
We look at the history and mystery of Alcatraz island in San Francisco Bay...
No trip to San Francisco is possibly complete without visiting Alcatraz Island. A mile and a half from shore, uninhabited by the Native Americans and then ‘discovered’ by the Spanish, ‘The Rock’ has seen a colourful history. Take a look at our favourite facts and tales about Alcatraz…

A military fortification, a military prison, a federal prison, a site for political protest and today a tourist attraction, there are so many fascinating stories surrounding Alcatraz to be explored when visiting San Francisco...

The name ‘Alcatraz’ conjures up very stark images and expectations today due to its time as a maximum security prison for America’s most notorious, but the Island’s name originates from something a bit more pleasant… it’s wildlife. Spanish explorer Juan Manuel de Ayala was chartering the San Francisco area in 1775 and named the island himself, ‘La Isla de los Alcatraces’, which translates as ‘The Island of the Pelicans’. There is debate about the exact origins of the word, however, but it is usually agreed that ‘alcatraces’ means ‘pelican’ or ‘strange bird’. Later, the name became Anglicised as ‘Alcatraz’. 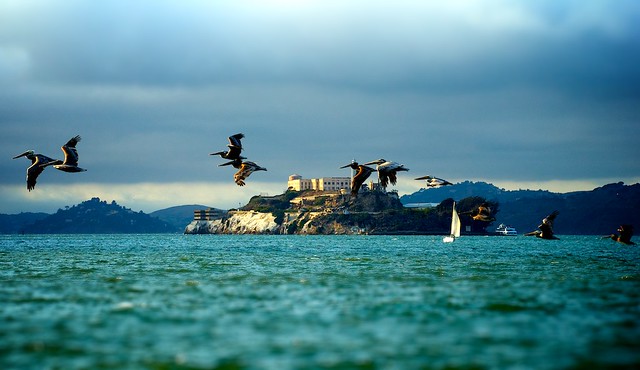 Alcatraz Island Lighthouse
Before the prison we know today was constructed, the first lighthouse on the West Coast was built on Alcatraz Island in 1854. It was damaged in an earthquake in 1906 so the lighthouse was replaced in 1909 and a modern beacon was later added to it in 1963, the year the penitentiary closed.  The lighthouse still stands and can be visited today.

Definitely one of, if not the most, infamous of Alcatraz’s residents is notorious gangster and racketeer, Alphonse ‘Al’ Capone (1899-1947). Capone began his 11 year sentence for tax evasion, in 1932 at the Cook County Jail and then Atlanta. He was then moved to Alcatraz, under the belief that he would be less able to manipulate the system from within (as he had been doing in the previous prisons). He certainly tried, but soon had to concede defeat to the system. Capone spent 4 ½ years at Alcatraz, holding down a variety of jobs and he even played banjo in the prison band, ‘The Rock Islanders’.
Escape From Alcatraz
It seems that some of the prisoners were not too thrilled to be incarcerated in Alcatraz. There are fourteen known escape attempts recorded, involving thirty-six inmates. Twenty-three men were caught and six unfortunates were shot and killed in their attempts.  Two men attempted to take on the currents of San Francisco Bay and drowned. A further five men are simply listed as “missing and presumed drowned”.
The Mystery
In 1962, one of the most famous escape attempts took place at the prison. The escape attempt involved three prisoners, Frank Lee Morris and John and Clarence Anglin. They enlarged the holes behind the air vents in their cells over the course of a year, using crude tools made from spoons. It’s actually unknown whether the men successfully escaped or if they died in their attempt, however their raft and possesions were later found, but their bodies were not…
Home on the Rock
During Alcatraz’s prison years, guards and their families would also live onsite. Altogether, around 300 civilians lived on the island, including women and children. Thankfully, they enjoyed their own facilities, including their own bowling alley and a convenience store. They could also freely visit the mainland, as boats went back and forth every day. However, this was the reminder Alcatraz residence faced as they approached the island by boat. The warning sign remains today and can be seen from the Southern tip of Alcatraz.
Closure of the Prison
It is believed that the (successful?) escape attempt of Morris and the Anglins contributed to the subsequent closure of Alcatraz, but the truth is that the prison was far too expensive to run. As well as a restoration and maintenance bill of somewhere between $3-5 million, the daily costs of running the prison were three times higher than any other Federal prison. As well as food, fuel and supplies, even fresh water had to be shipped from the mainland daily. In the end, it was more cost-efficient to build a new institution and close Alcatraz for good. On March 21st, 1963, they did just that. The image below shows the prisoners leaving Alcatraz Prison. Convict number 1576, armed robber Frank C. Weatherman was the last prisoner out the door.
Occupation of Alcatraz
In November 1969, a group of Native American protestors began their occupation of Alcatraz Island. It lasted 19 months and they gained great support for their cause. The natives claimed the unused island as Indian Territory under the Treaty of Fort Laramie. They intended on building cultural and educational facilities for people to learn about Native American people. In 1971, however, their support began to dwindle and in June of that year, the last of the occupiers were removed by government force.
Art at Alcatraz
As well as being a former home to many notorious criminals and ne’er-do-wells, Alcatraz is used as a temporary home for other things, such as the exhibition @Large  (27th Sept 2014 – 26th April 2015), by activist and artist Ai Weiwei. This exhibition has seven installations, inspired by Alcatraz’s history as a prison, fortress and site of Native American protest. It explores themes of human rights and freedom and it all looks amazing.
Ai Weiwei was rather famously under house arrest himself when he created these pieces. Thanks to this exhibition, visitors can explore areas of Alcatraz that would usually be off-limits. If you’re visiting San Francisco and Alcatraz, it’d definitely be worth checking out what exciting exhibitions are running, as you might get the opportunity to see something very special.
Weiwei’s installation With Wind, uses this dragon kite, along with imagery or birds trapped mid-flight inside the New Industries Building. It represents a contrast between freedom and confinement which resonates all too well within its maximum security surroundings.
Alcatraz Today
In 1972, Alcatraz Island became a national park and a year later it was opened to the public. Approximately 1545 men were imprisoned in Alcatraz over 30 years. Today, it is visited by over a million tourists in a single year, from all across the globe. Regular ferries operate once more to take visitors back and forth to the island (and this is the only way to get there). In fact, The Rock is so popular, tickets to visit Alcatraz can sell out weeks in advance.
If you're planning a visit to San Francisco, take a look at the range of amazing range of attractions and experiences in San Fran from Attraction Tickets Direct' before you travel and purchase tickets for one of our Alctatraz tours.
San Francisco , Alcatraz , Travel , Travel Guides
Tweet